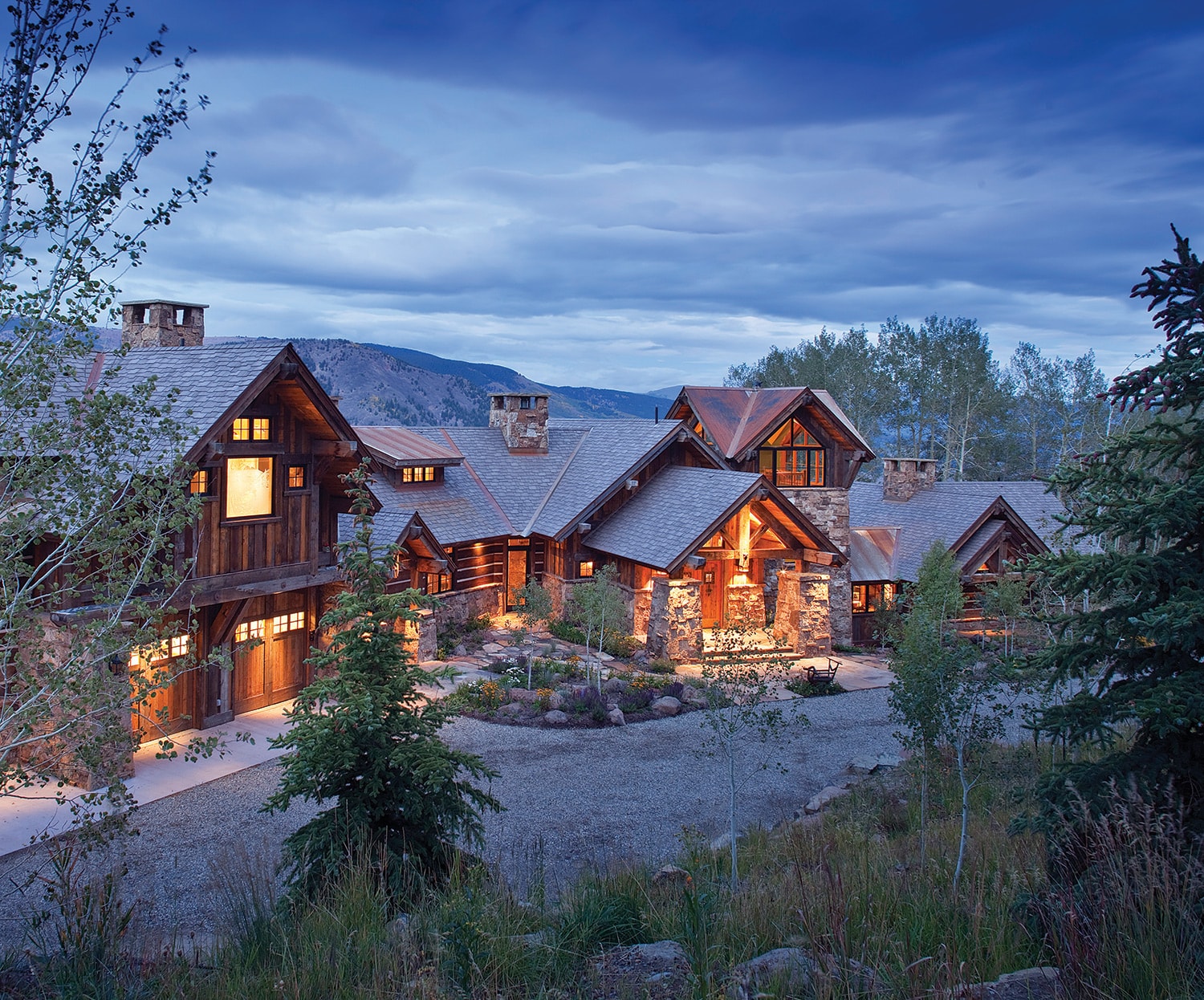 Located just outside of Crested Butte, Colorado, the Humphreys’ home sits along 2 miles of private fly fishing waters, surrounded by Rocky Mountain peaks. Designed by local architect Jennifer Hartman of Sunlit Architecture, many elements of the home were built with wood salvaged from an old grain mill.

FOR YEARS, CATHEY AND DON HUMPHREYS WERE CONTENT being recipients of invitations to visit friends in Crested Butte, Colorado. The Dallas, Texas, couple had just returned to the U.S. after living abroad for several years when Don was asked to join a group of fraternity brothers there for a ski trip. When he returned, he encouraged his wife to make the trip to Crested Butte herself. Separately, and together, the Humphreys fell in love with the region’s pristine beauty 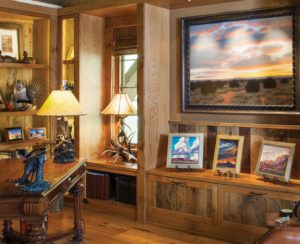 Like other rooms in the house, the study serves as a gallery to showcase the couple’s art collection. “Sunset Sky” by Stephen Day hangs on the wall, with three small oils by Ed Mell sitting underneath.

Upon deciding to build a home of their own, the Humphreys found a site that satisfied both of their needs. Don, a fly fishermen, and Cathey, who enjoys snowshoeing, settled on a parcel 10 miles south of Crested Butte, on the East River. With 2 miles of private water and sweeping views down the valley, it gave the couple a sense of true retreat. “You don’t see any other houses,” says Cathey. “It’s just you and nature.”

To design their home, the Humphreys hired Jennifer Hartman, principal of Sunlit Architecture in Crested Butte. The site, Hartman says, was remote and steep, but it also had a beautiful aspen grove, “and a big, open meadow screaming for the house to sit in it.” 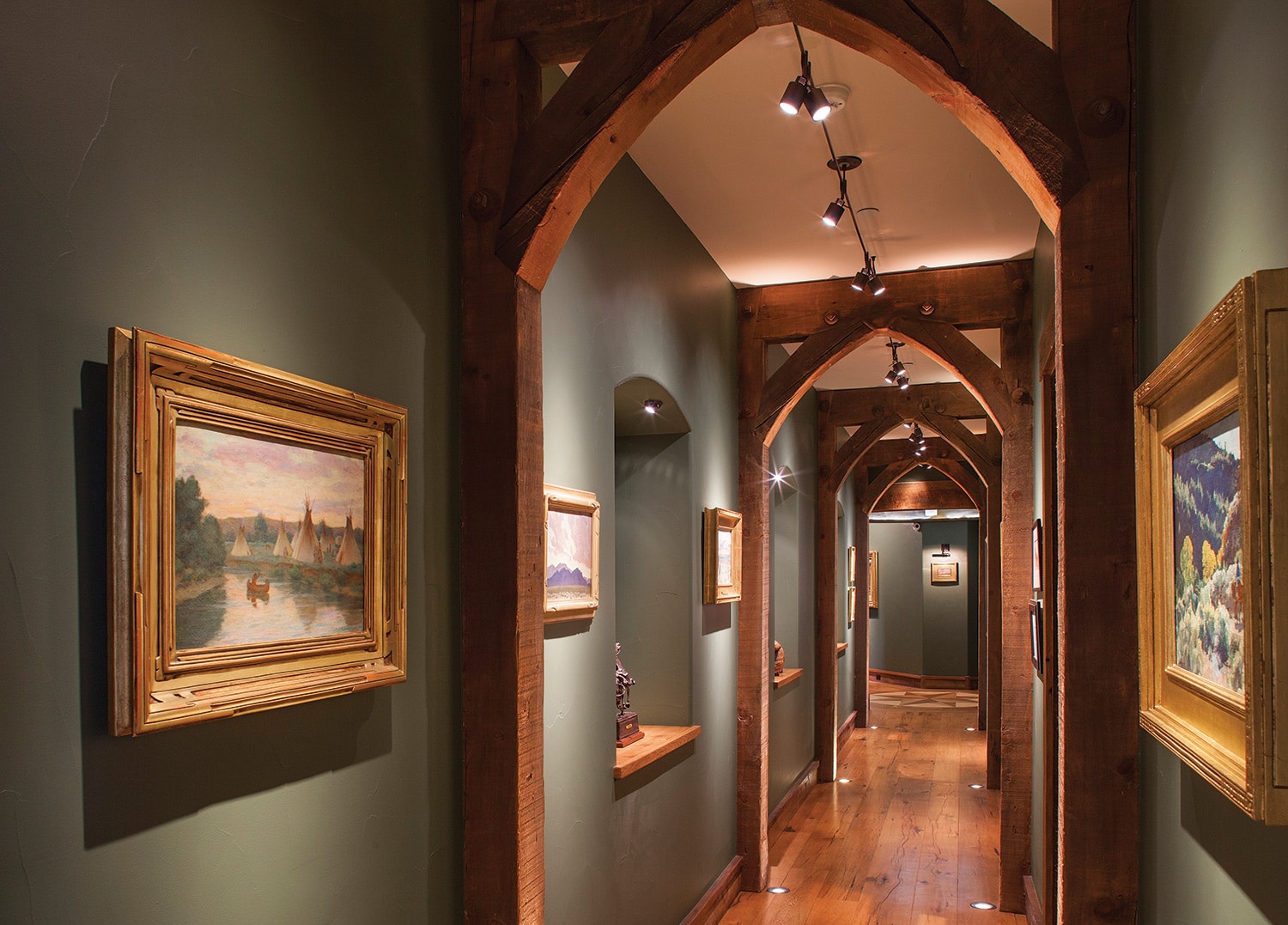 Repetitive, reclaimed timbers frame the hallway, which utilizes art lighting designed by Eric Naughton at Electrical Logic Lighting Design. Here, the most important works in the house are showcased, including paintings by Taos Society of Artists members and Frederic Remington, with display niches for sculpture. Hartman wanted to create “a unique experience” in the home’s hallways, reminiscent of trains that would arrive to Crested Butte via tunnels. 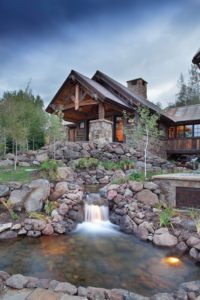 Water features surrounding the home were designed by Steve Curtis at Rocky Mountain Trees and Landscaping.

Beyond wanting a comfortable home that could welcome large numbers of guests — including their three adult children, spouses and grandchildren — the homeowners did not have a finite idea of how they wanted their house to look. Trusting in the “young, fresh and new” ideas of their architect, the Humphreys gave Hartman a great amount of freedom to design what she felt was best for the site. 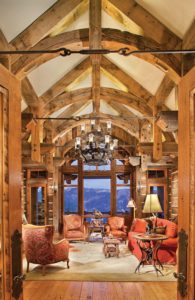 “They wanted something that would stand the test of time,” says Hartman. “[The owners] let us do our job, allowed us be creative.”

Hartman turned to traditional mountain architecture, influenced by the “parkitecture” of North America’s great lodges, to provide a refined, yet rustic elegance to the residence. The key to achieving this look was finding and sourcing the right materials. Knowing that reclaimed timber was a priority, builder Roger Cesario of Copper Creek Homes located an abandoned grain mill in Wisconsin that was being dismantled. From this trove, Cesario handpicked all of the new home’s wood, and used the old building’s massive timbers and northern white pine for everything in the home from trusses to cabinetry, siding to flooring, casing to mantelpieces. Even the building’s metal nails and fittings were turned into coat hooks and cabinetry pulls. Chris Lennox and his team of craftsmen at Combined Timber Crafts fabricated all the timber trusses in the house using traditional joinery.

With the house design in motion, Cathey and Don set about on a new hobby — collecting. They were new to Western art, but dove in head first, working with Nicholas Reti at Crested Butte’s Oh Be Joyful Gallery and Nat Owings at The Owings Gallery in Santa Fe, New Mexico. The couple started the foundation of their collection with pieces by Maynard Dixon, followed by artists such as Frederic Remington, W. Herbert Dunton, Ed Moses and Victor Higgins, among many others.

“Art interested us both, and Don in particular, is drawn to Western art,” says Cathey. “He’s consciously building a serious collection. Most of the artworks we have are from the Taos artists in the early 20th century. Don calls them ‘The Dead Guys.’ His collection is very calculated and well rounded. He is picky about what draws him in. It has to be something he enjoys looking at and is passionate about.” 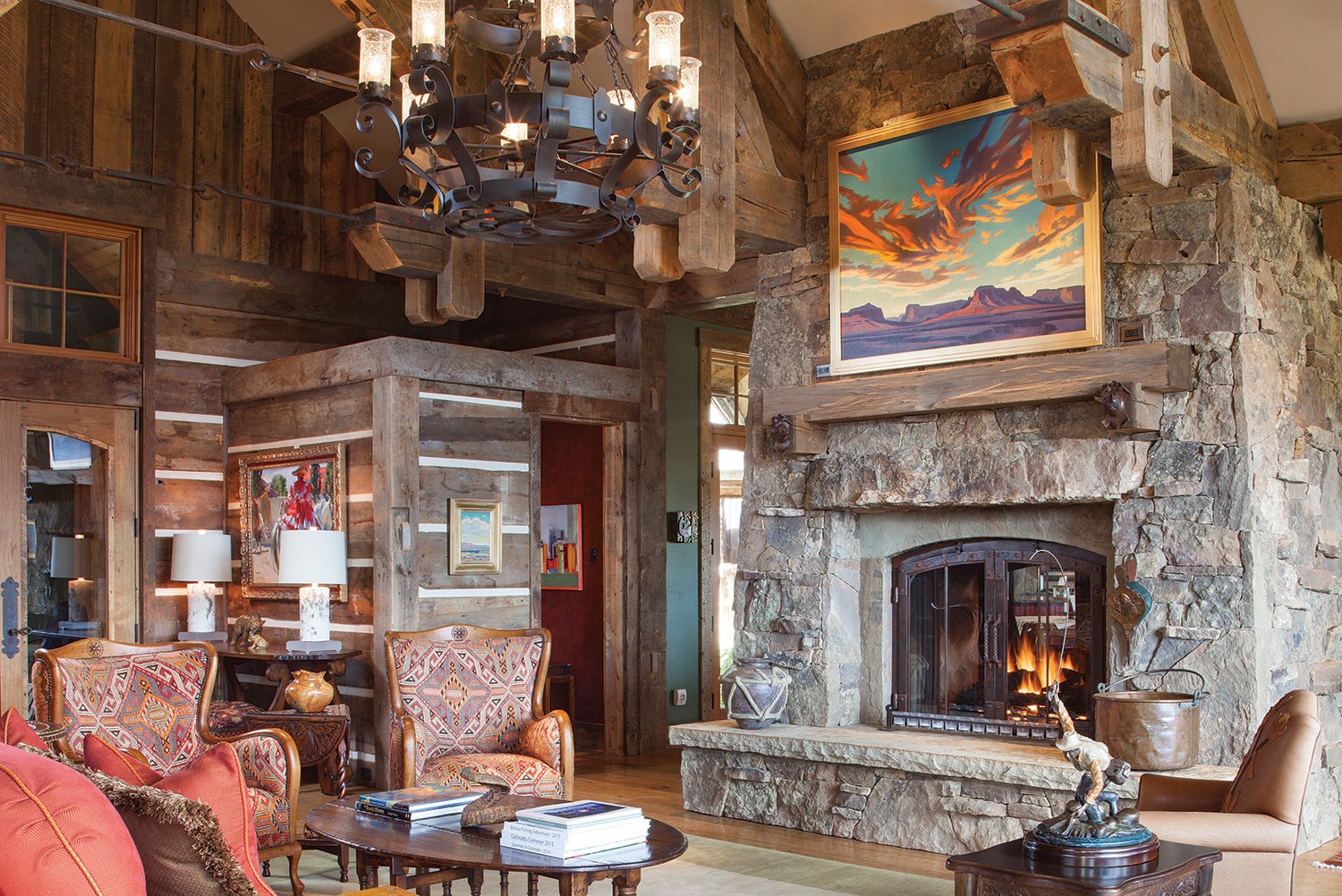 Giant timbers from a salvaged grain mill were weathered by the grain spilling over the wood. Some of these timbers were used between the living room and kitchen and in the mantle of the main fireplace, replete with the painting “Spiral Sundown” by Ed Mell

Focusing on museum-quality works from the late 1800s to works in the early turn-of-the-century American Western genre, the Humphreys collect paintings, illustrations, sketches and sculpture.

“The entire house is built for art,” says Reti. “When you walk into the house and experience their collection, you get a feeling of historical importance and significance.” 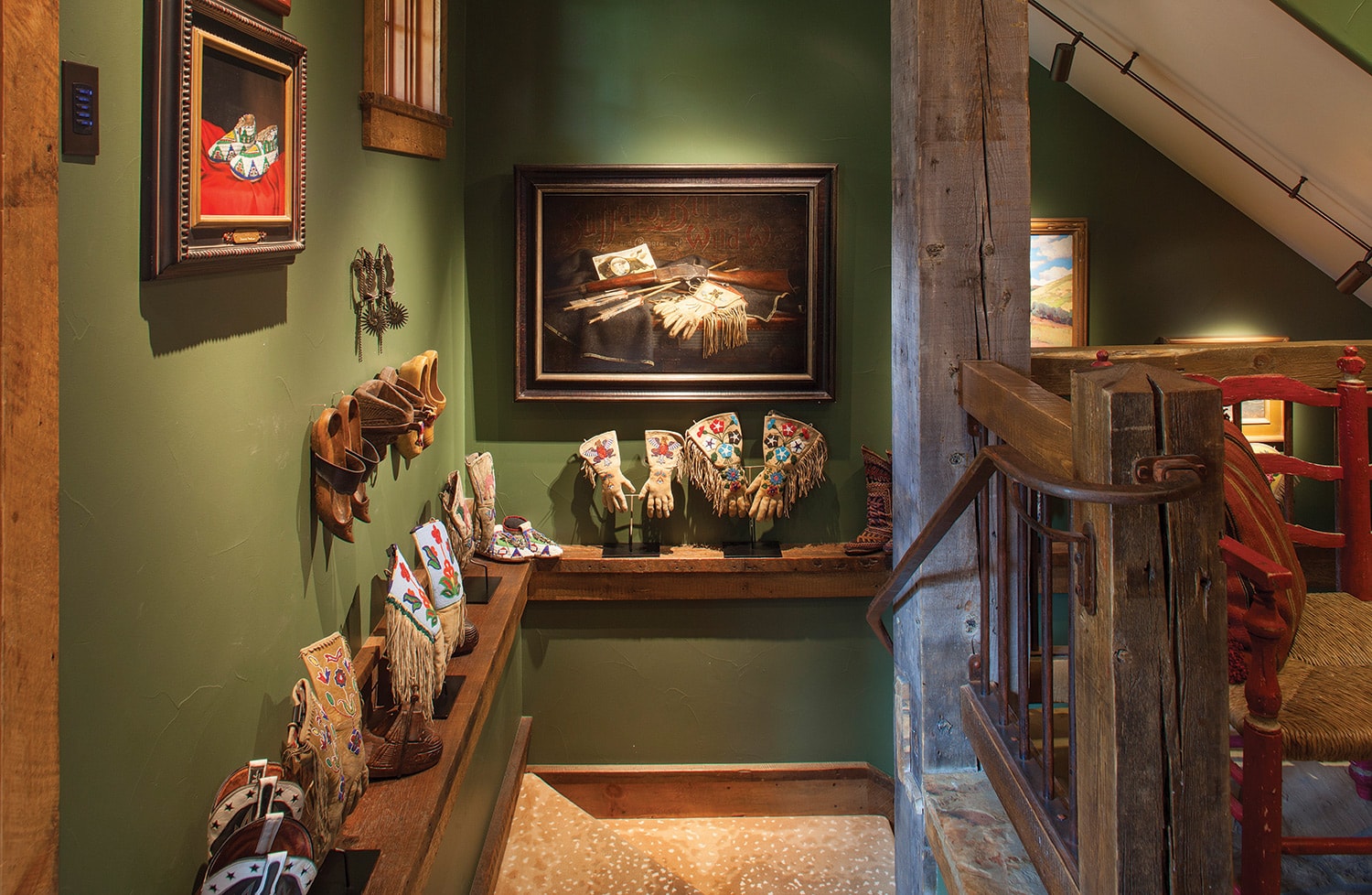 A niche holds an eclectic display of original Native American artifacts, Western memorabilia and still life paintings, including “The Red Blanket” by Patricia Dobson (left), and “Champion of the West” by Kyle Polzin (center). While building the home, Cathey began a collection of Native American gauntlets, leather beaded gloves with fringe, and antique objects from rodeos and parades of the American West.

In addition to Western masters, the collection has contemporary pieces as well. Cathey admits her taste leans towards pieces with powerful personality. “I like to have a surprise when I enter a room,” she says. The Humphreys are also patrons of regional artists that paint Crested Butte, including Walt Gonske, Stacey Peterson and Reti himself. 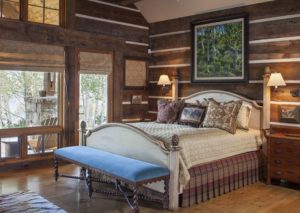 Every bedroom has its own bathroom and is decorated in comfortable, casual fabrics. “Aspens and Lupines” by Shaun Horne hangs over the bed.

“Things I’ve chosen, they just hit me right,” Cathey says. “A piece has to be right for the place and the space. The best part is, all of the artwork, every piece, they all have a story.” 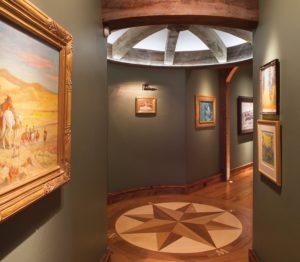 “Pueblo Indians Headed for Camp” by Oscar E. Berninghaus hangs to the left, and a compass rose was laid on the floor pointing toward true north. 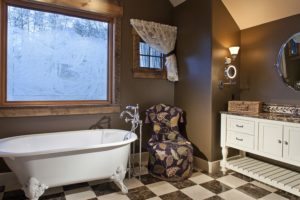 An etching decorates the bathroom window, and a cluster of small paintings hangs above the sink in the powder room. 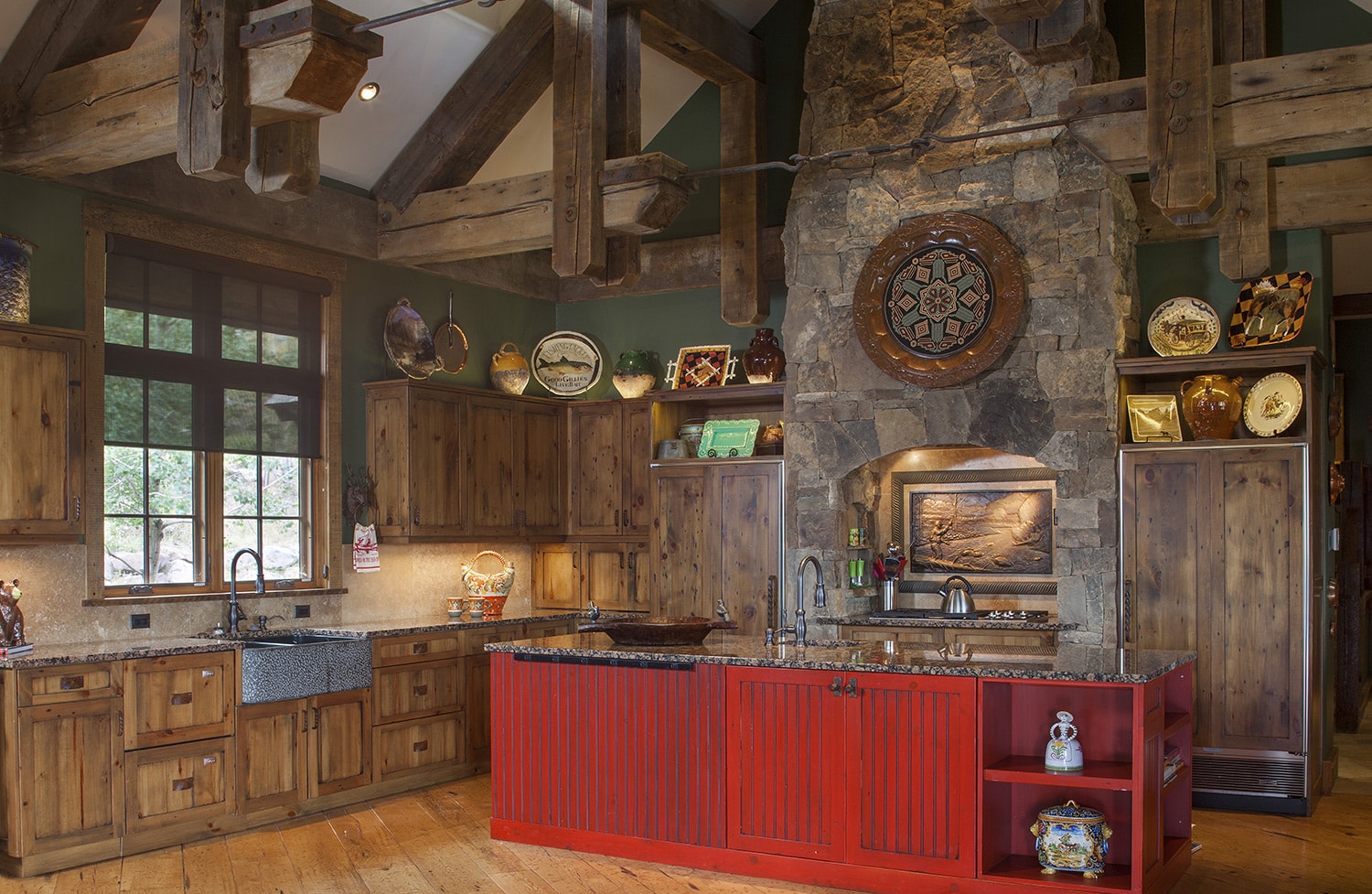 A bronze sculpture, “On the East River” by Ronnie Wells, hangs on the stone chimney, with the painting “Native American Beaded Platter” by Marilyn Enders lit up above the cooktop. 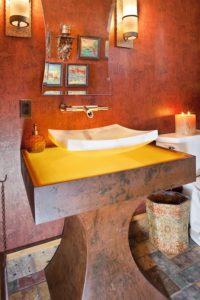 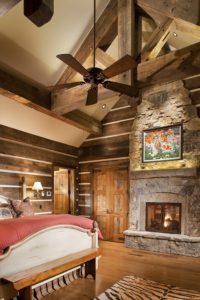 The master bedroom is accessed by crossing a water feature that runs beneath a bridge. Set away from the house, it has the feeling of an old rustic cabin, with private access to the backyard. Above the fireplace is Ya Ya’s Garden by Dawn Cohen. 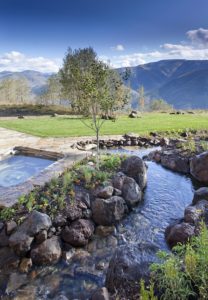