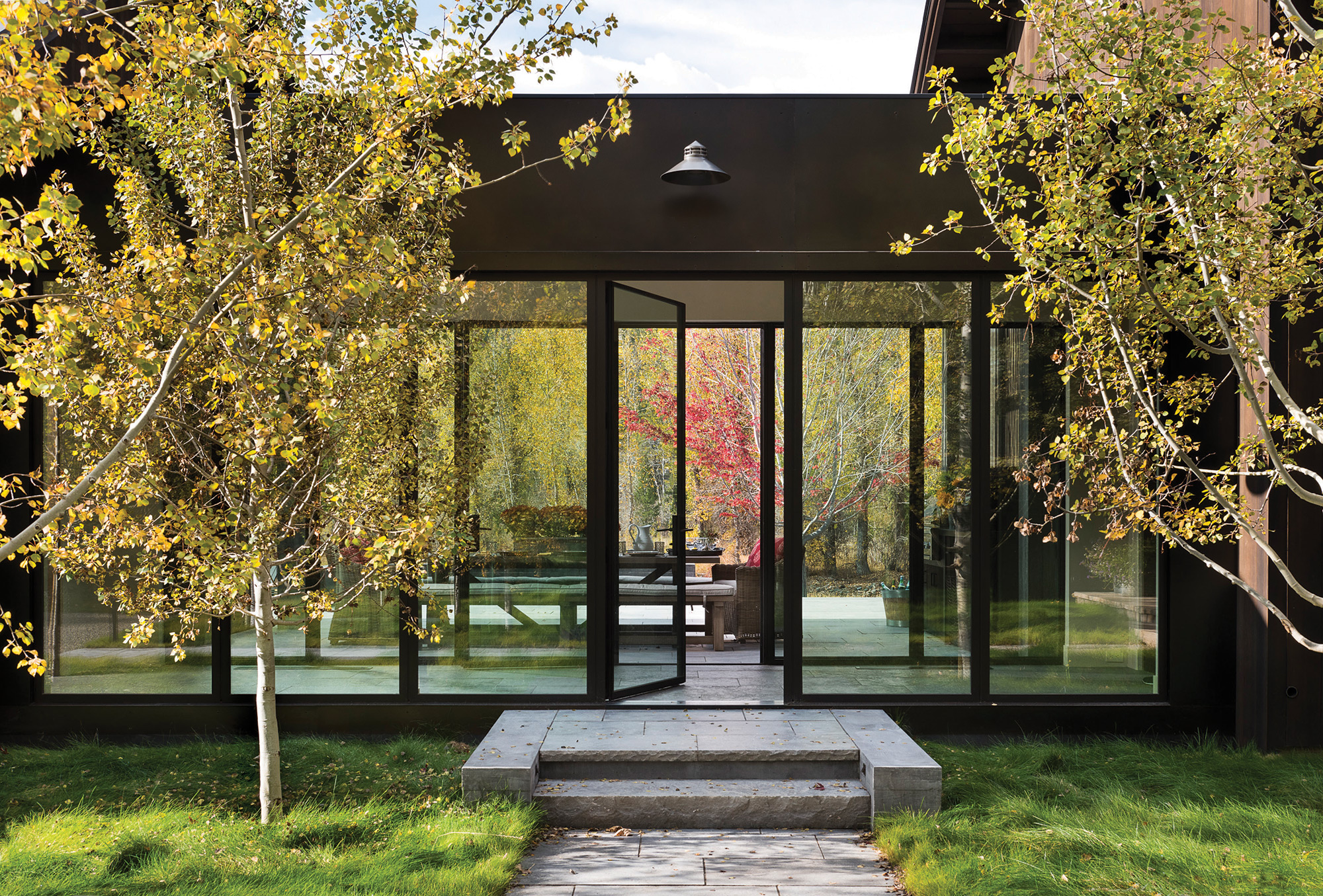 This 7,000-square-foot house in Ketchum, Idaho, incorporates a clean, modern style while still appearing to be a part of the natural environment. Architect Janet Jarvis divided the home into four parts with connecting walkways to keep the original barn-like forms united. Photos: Heidi Long, Longviews

19 Jul Illuminations: Ones to watch

After a visit to Kyoto, Japan, Janet Jarvis’ client wanted a clean, contemporary look exemplified by the shou sugi ban treatment her client discovered while there. Shou sugi ban is an ancient Japanese siding technique that preserves wood by charring it with fire. Their goal was to create a structure so dark and simple that the house practically disappears into nature.

The 7,000-square-foot house, located north of Ketchum, Idaho, sits on a river surrounded by native vegetation. “When we first started the project, our client wanted shou sugi ban, but it was a challenge to find a material that would work for the exterior,” Jarvis says. “We tried all types of wood to see how to achieve that result. In the end we tested the charring on the guest house. … When we got to the main house we went with wire-brushed clear cedar, chemically processed and stained, to achieve the look; in lieu of doing the char on the main house, we created a new material.”

Another challenge was making use of the existing footprint of the home, which was built in the 1950s, while still keeping the proximity to the river.

“By breaking the house into four different pieces with connecting walkways, we were able to achieve the riverfront ambiance the client wanted,” Jarvis says. “It evolved as a way to solve the idea that every area of the house would have river views. I call it a campus plan, with individual buildings connected by glass and steel walkways.”

That design allowed them to maintain the original barnlike forms for the individual buildings, which were rectangular in shape and simple.

Since the owners had an extensive art collection, Jarvis also had to allow for enough wall space. She worked within a constant formula, weighing the amount of window walls against the number of art walls, at all times keeping in mind the spectacular views. “We had to balance that carefully,” she says. “The entry gallery didn’t have any glass so it would provide space for the artwork.”

Jarvis worked closely with interior designer Toni Breck of Hunter-Breck Designs and contractors from Dembergh Brown Builders. She also worked with Dede Draper who designed and built contemporary willow furniture and sculptures, including a trellis over the outdoor dining room that allows shade in the summer but can be removed during the snowy winter months.

“Because we wanted to use the barn wood in a more contemporary way, rather than for a lot of walls, we used it as contemporary details, as in the kitchen ceiling,” Jarvis says. The architect kept the material “within a fresh, crisp context” by using a grid pattern with flush beams. “The reclaimed barn wood is really a background and not the predominant feature,” she explains.

The house is one story with the exception of the office bunk room above the garage. The owner asked to keep the main house low profile with an intimate feeling.

“We worked with landscape architect Rob King to bring the native grasses that are in the meadow right up to the house,” Jarvis says.

The resulting contemporary home complements the native vegetation and pays homage to its rustic setting and Japanese culture. 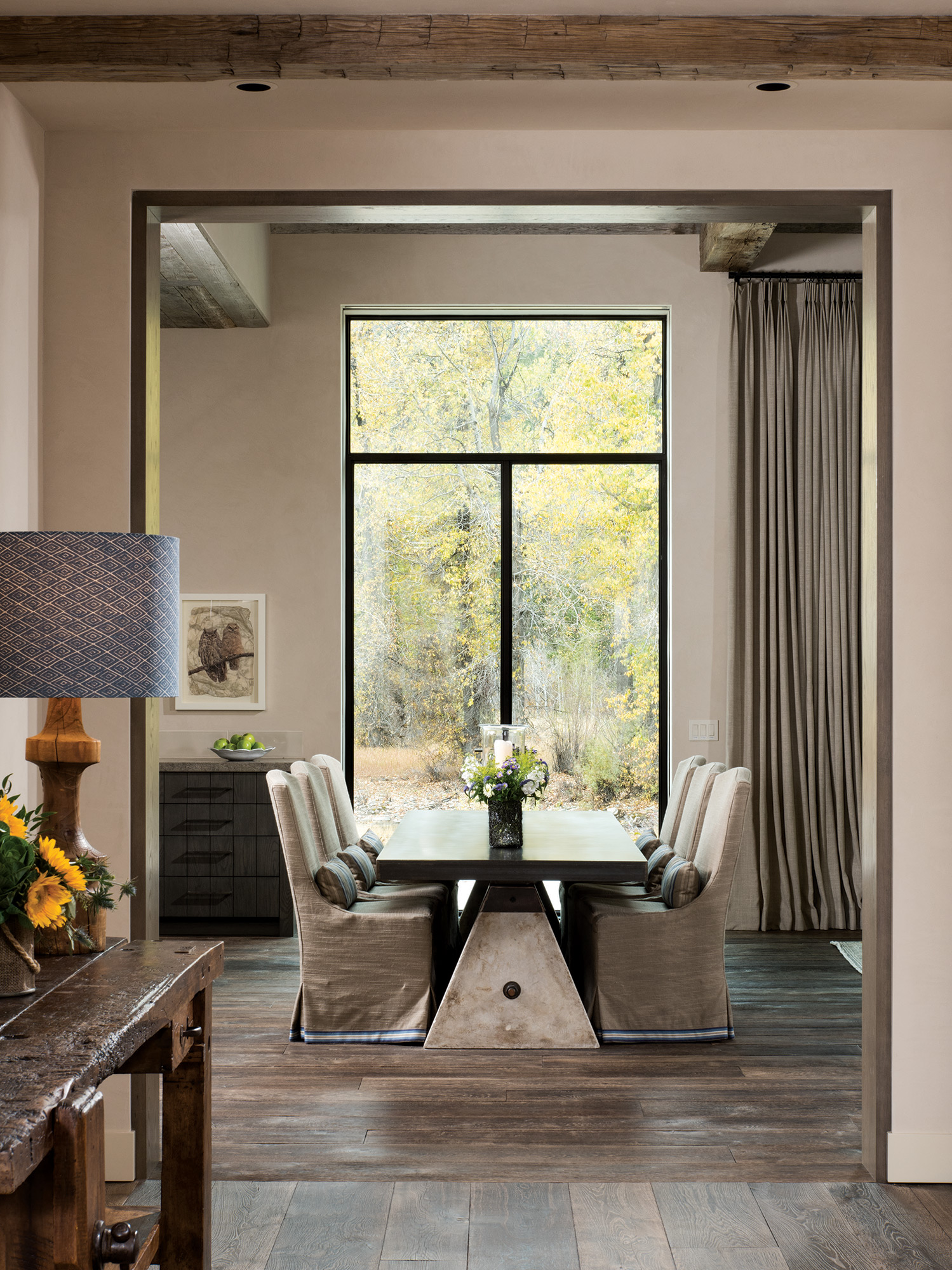 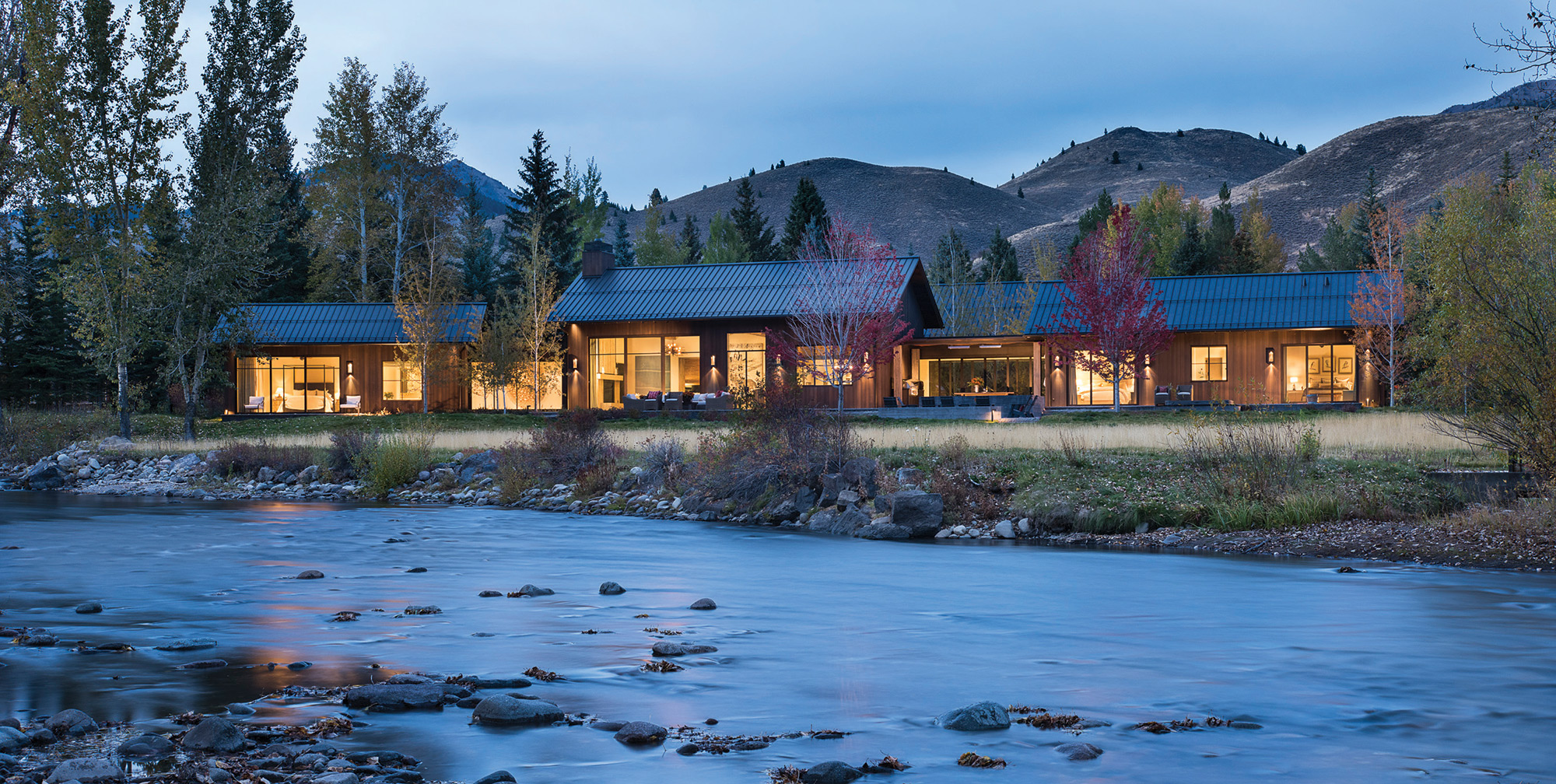 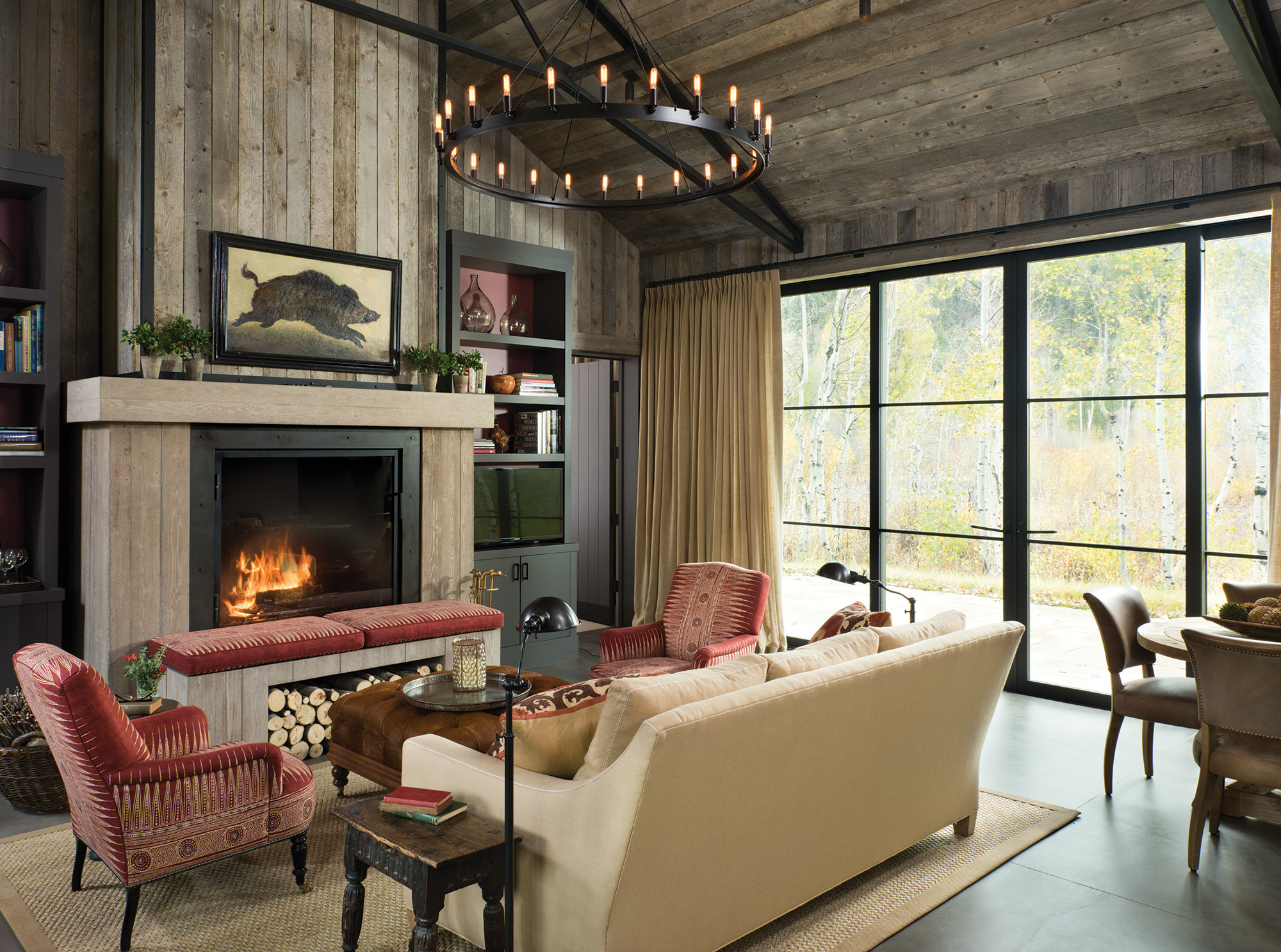 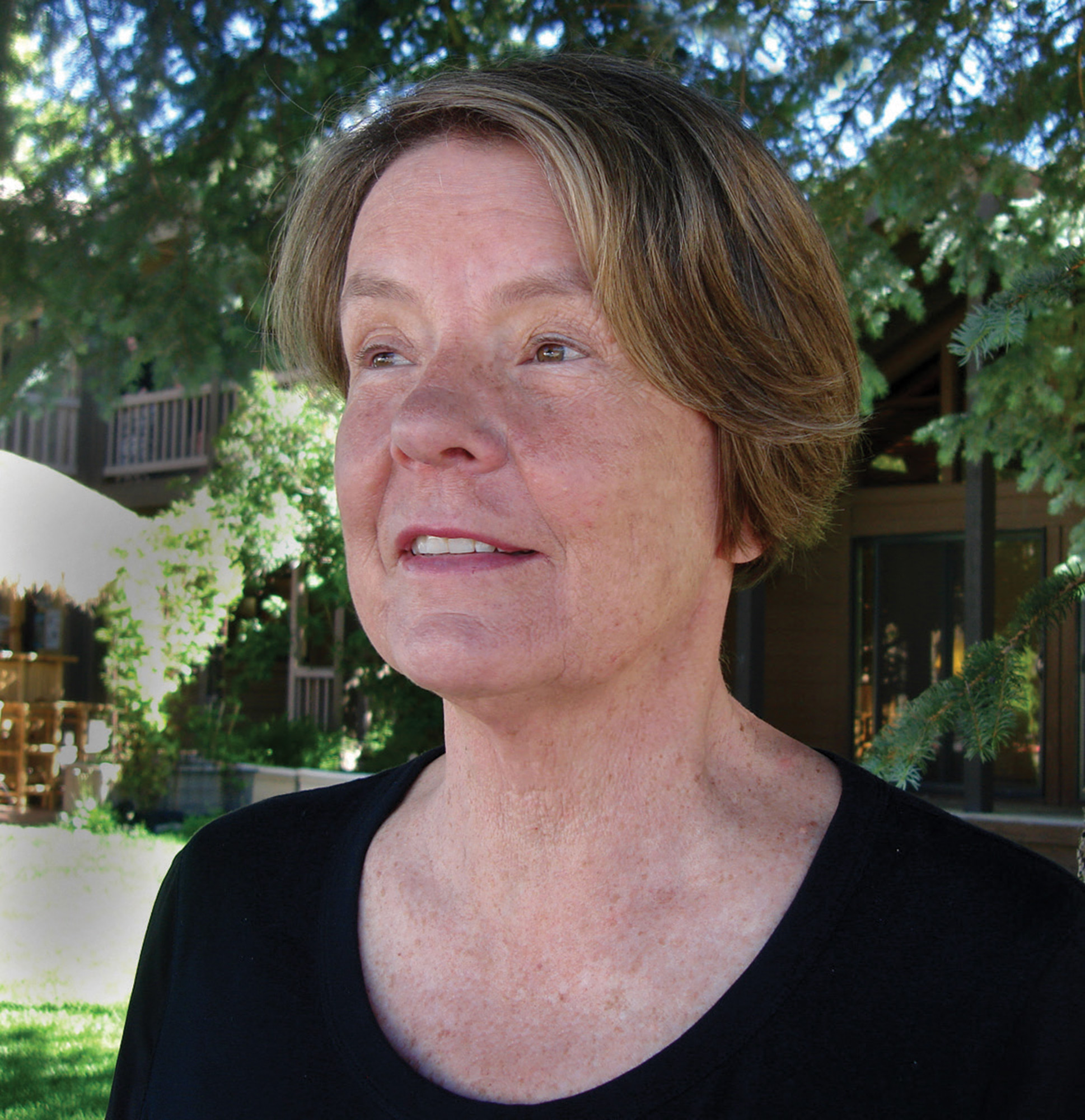