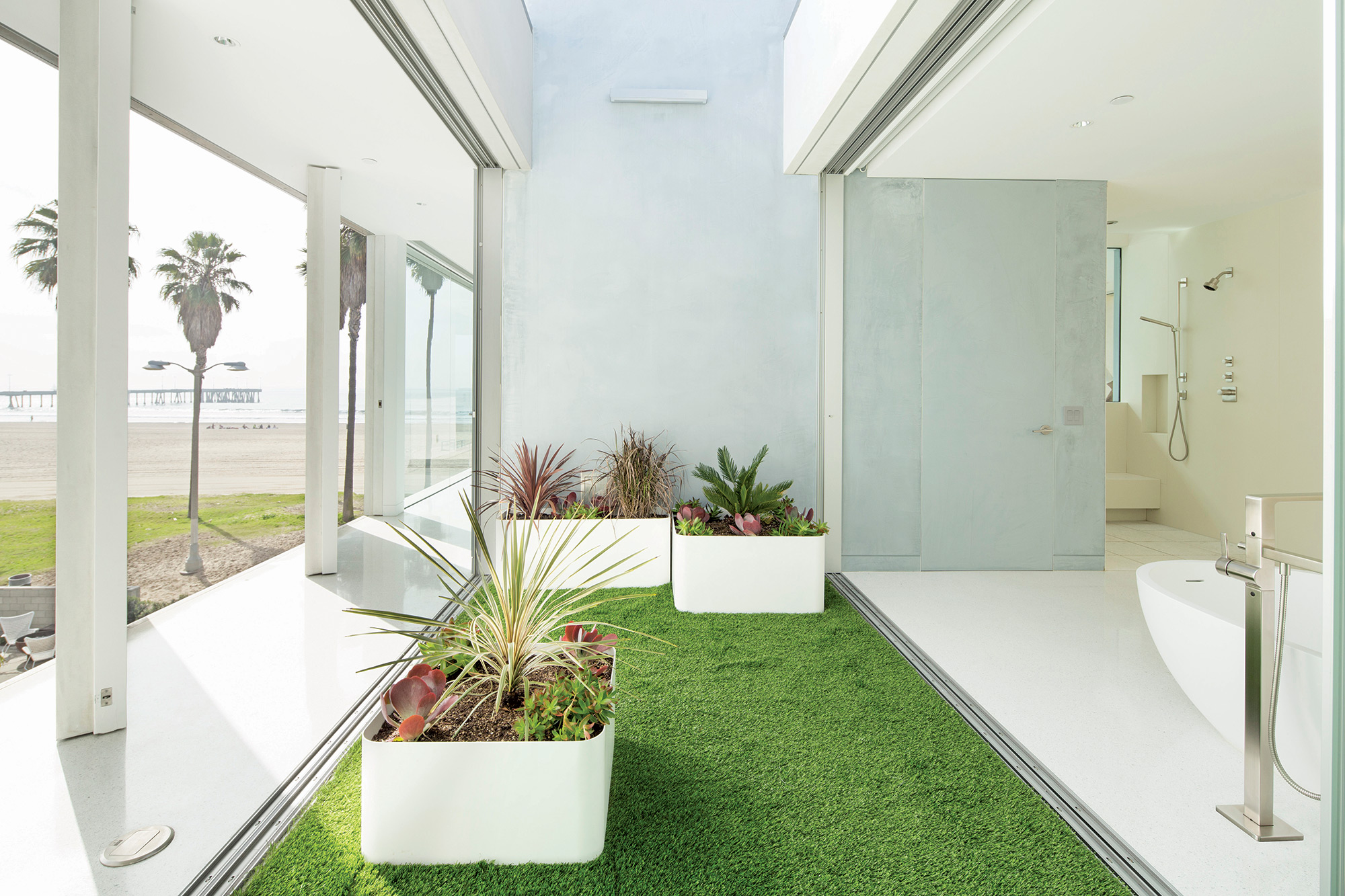 Flip Flop is a playful mix of textures and light that opens to embrace the ocean views. A pocket garden accompanies the master bathroom’s view.

17 Nov Rendering: Born to be Bold

Dan Brunn is an incredibly lucky man. No one knows that better than he.

The first house he was commissioned to design was built while he was still in his 20s, and it won him the kind of recognition and trust from clients that most architects wait decades to acquire.

Now, at age 38, his firm, Dan Brunn Associates, has a definitively Modernist aesthetic. You won’t find any Mediterraneans or Cape Cods slipping into this portfolio.

“One day I had to write something about myself,” he says, “and I wrote ‘Bauhaus Modernism.’ A lot of people could claim that, but I was born into it.”

Brunn’s early childhood was spent in Tel Aviv, Israel. Until recently, few outside the country were aware of just how rich Tel Aviv is in Bauhaus-style architecture, he says. Some 4,000 buildings were designed by architects who fled Nazi Germany in the 1930s, and a big portion of the downtown is known as the “White City” for its white, stucco exteriors.

The Bauhaus was a German school of design, architecture and applied art founded by architect Walter Gropius [1883–1969]. Its aim was to reunite art and craftsmanship to the world of mass production. While Bauhaus didn’t invent Modernism, it had a profound effect on 20th-century art and architecture.

“As a kid, I would walk the streets and touch the buildings,” says Brunn, whose family lived in a classic modernist home with open space and floor-to-ceiling sliding doors. “The built world around me naturally taught me.”

When he was 7, the family moved to the United States and into an ersatz Mediterranean-style home in Beverly Hills, California. It was a shock.

“All of a sudden, I was in a dark room with tiny windows,” Brunn says. “Why? Why? Nothing worked. Nothing made sense.”

But he soon discovered California Modernism, including work by Rudolph Schindler [1887–1953] and Richard Neutra [1892–1970]. He was born into Bauhaus, but California, he feels, shaped him.

Brunn went on to the University of Southern California School of Architecture and Harvard’s Graduate School of Design. His first solo project was the award-winning Caesarstone showroom in San Francisco, California.

The budget for the project didn’t include an architectural photographer, so Brunn took on the task. He was in Los Angeles at Samy’s Camera, asking a clerk for advice on improving his images, when a tiny woman interrupted. The clerk, who’d admired the showroom’s design, if not the photographs, responded:  “Hedy, you’re looking for an architect. Meet Dan.”

Hedy and Samy Kamienowicz, co-owners of the popular store, had a rare virgin beachfront plot in Venice, California, where they wanted to build. Hedy was impressed with Brunn’s Harvard degree, and despite warnings from the couple’s friends that they were crazy to hire someone so young, they did; and they gave him free rein. Today, the Kamienowiczs are like a second family to Brunn.

“Everyone needs a patron,” Brunn says.

As for Hedy, she gambled and won a house that’s already a landmark. Brunn, who’s also a musician, gives his houses names that sound like song titles. The Kamienowiczs’ house is the Flip Flop House, named for pivoting stucco top-floor windows that can be closed to provide wall space for art. Decidedly minimalistic, the house incorporates expansive glass windows to take in the sweeping coastal views, and there’s a fluidity between indoor and outdoor spaces. A wrap-around roof extension and terraces relieve the summer heat, and a reflecting pool adds even more light to the bottom floor.

“It’s my place of serenity,” Hedy says, adding she’s still impressed by Brunn’s confidence, knowledge and integrity. “But above all,” she says, “his passion.”

“When we design a space,” Brunn says, “it starts with the human being and opens up. So whatever shape results isn’t the outcome from the get-go. I didn’t know what Flip Flop was going to look like.”

The owners of the lot next door interviewed well-known architects for six months, but were impressed enough by Flip Flop to hire Brunn. The Zig Zag House, named for the setback regulations required to add a third floor, carries the theme through in contrasting dark stucco against white.

Although Brunn is breaking ground on a plot across the street, his current house, #9 Dream, is a ho-hum 1950’s bungalow on the edge of one of Los Angeles’ most stately neighborhoods. Brunn has left the exterior as is, but eliminated the attic and created an immense open space, imbued with natural light, that includes living, dining and kitchen areas under a soaring ceiling. The house is white and minimal, with no technical materials visible — those, he believes, are the most quickly dated elements of a house. He’s so committed to this principle that even the kitchen drawers are without handles.

Yet, the house has warmth and a lived-in quality, with walls covered in art, a shelf displaying his collectibles and a mezzanine for books and a sound system. Brunn’s houses may be minimal and sculptural, but they’re not museums. They’re meant to both reflect and inspire their owners’ lifestyles.

He’s just completed Hide Out, a remodel of a 1970’s Frank Gehry house. It’s not as presumptuous as that might sound; the house was never compltetly realized by the famed architect. It’s a project for an artist friend, James Jean, and has startling features like a wood teahouse framing one end of an open white space and sculptural walnut slats along the staircase.

The next project in the planning stage is a 12,000-square-foot house in the hills above Sunset Strip in Los Angeles. It’s an exhilarating challenge. How will Brunn transform his elegant and witty minimalism into a sprawling manse around a courtyard? How do you switch from creating the illusion of huge spaces into working with a huge space? He can’t wait. 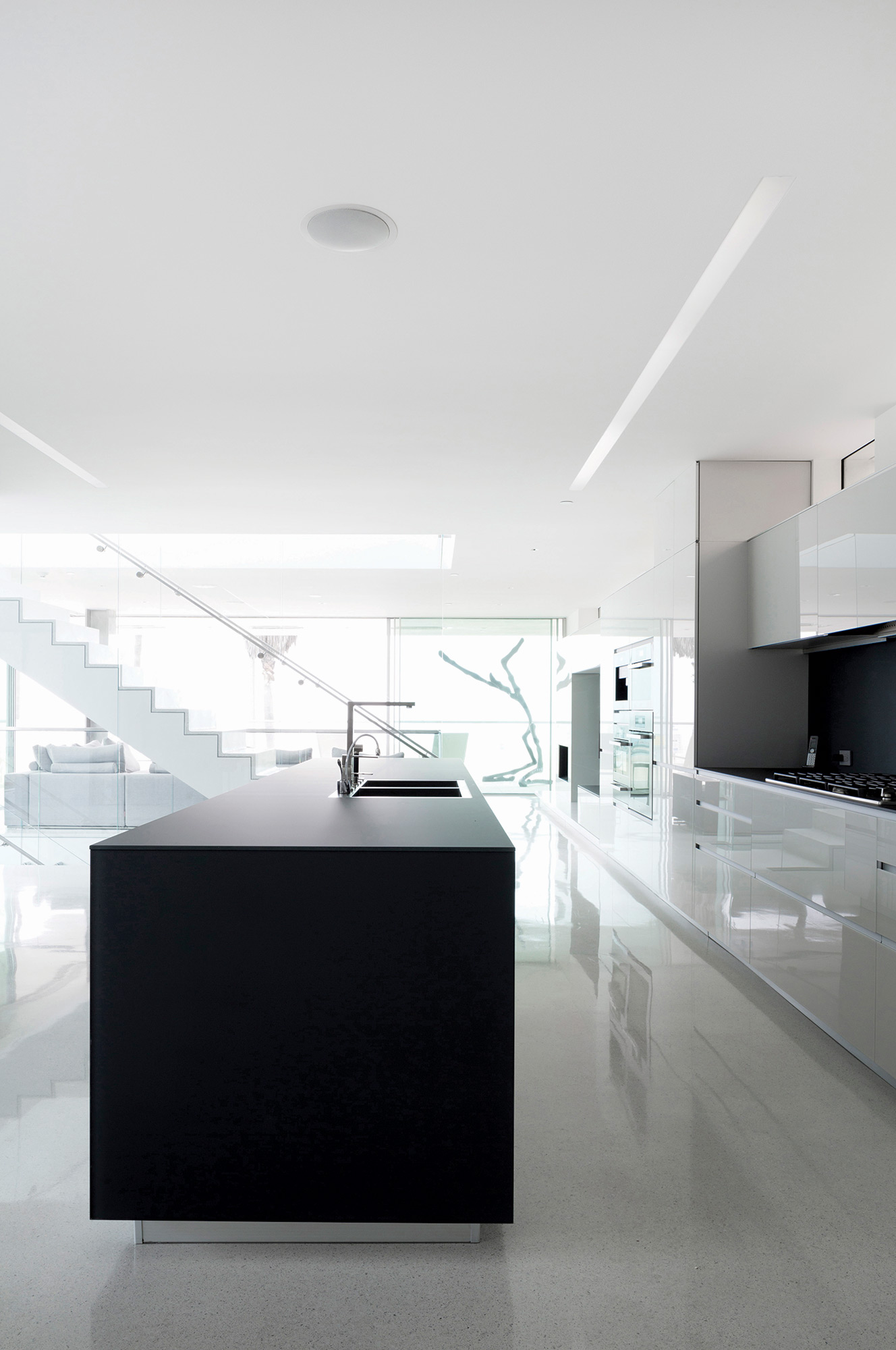 The kitchen surfaces in the Flip Flop House are back-painted glass, and the central staircase is glass-enclosed with terrazzo stair treads. 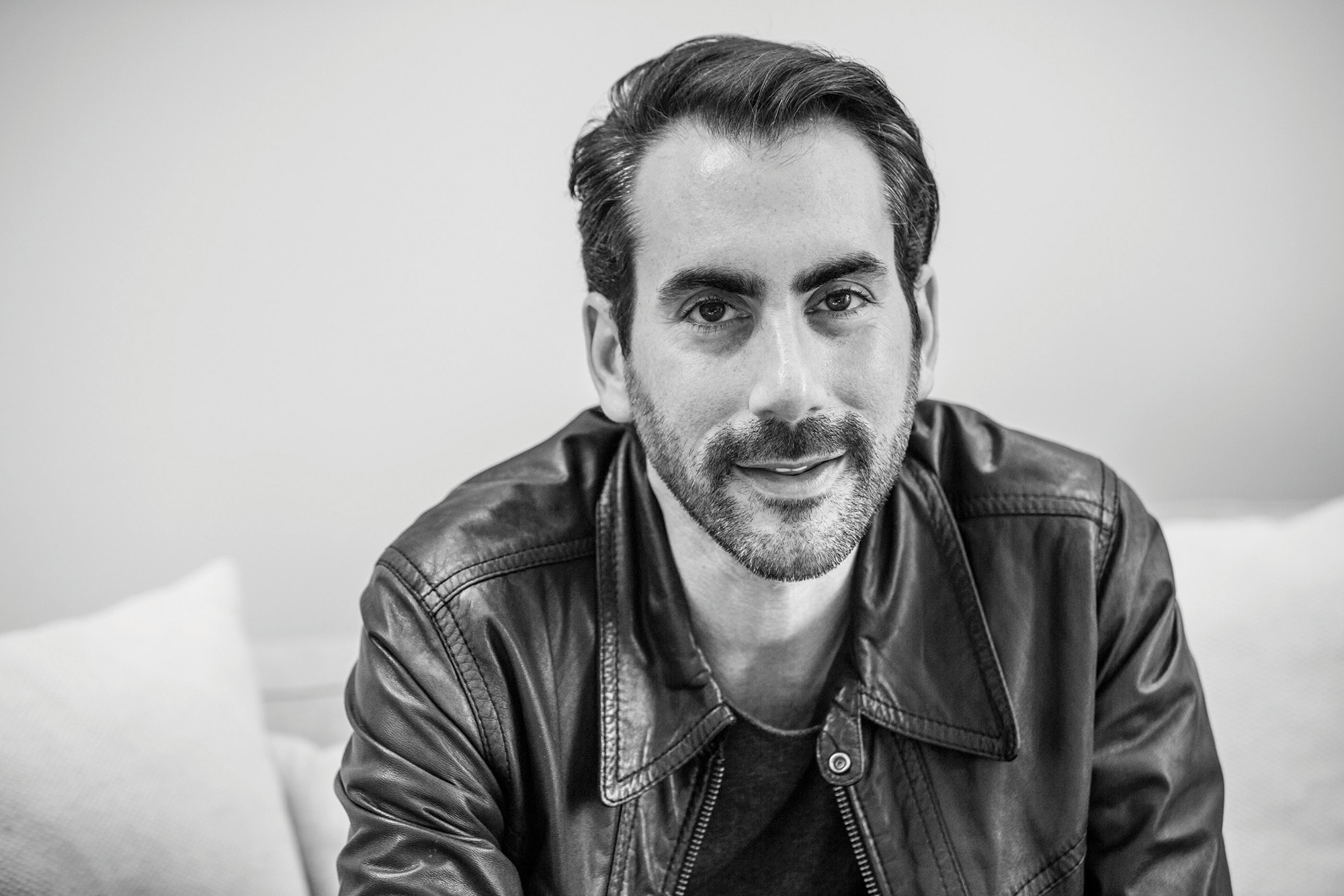 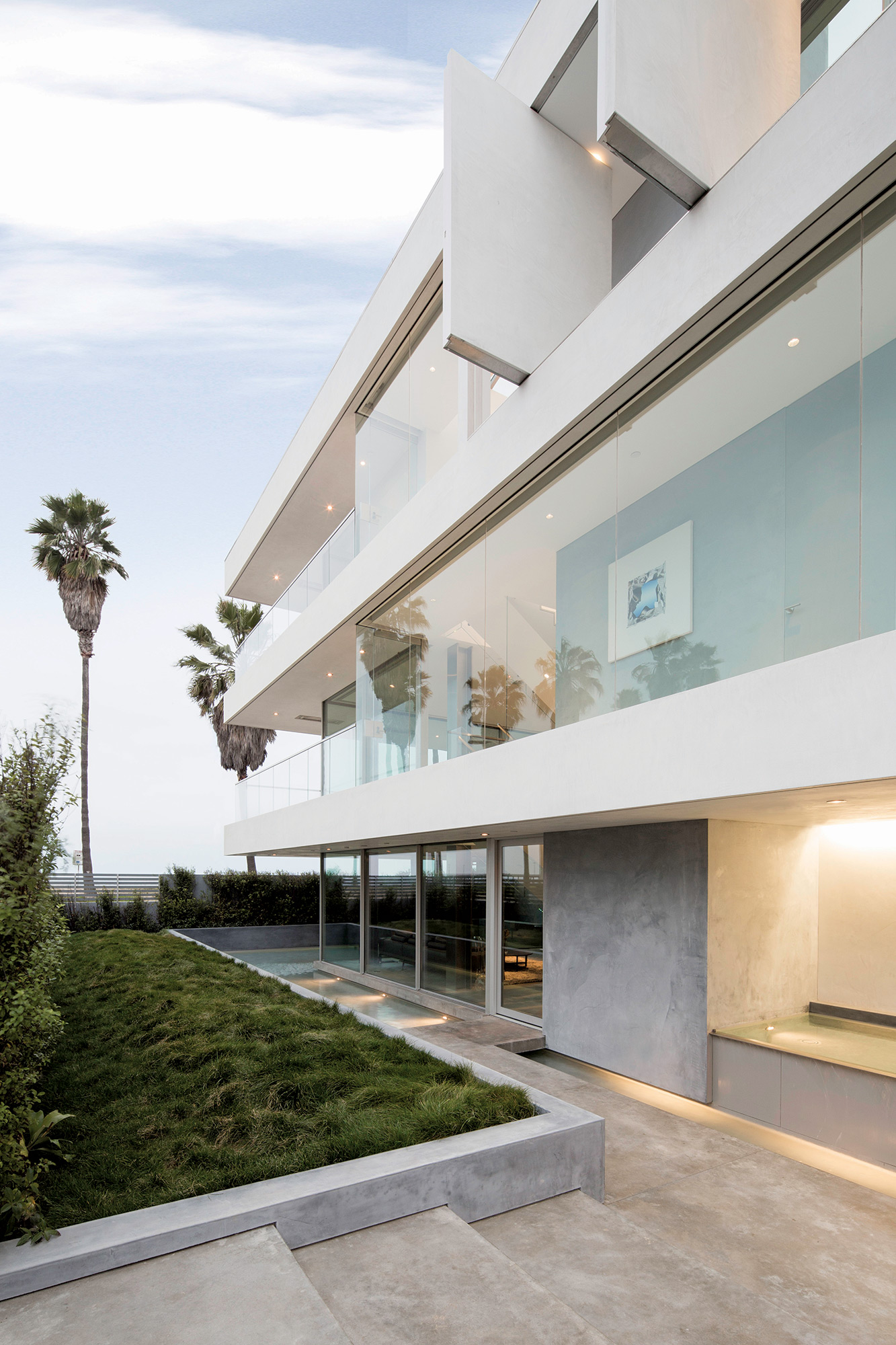 The Flip Flop House, with its namesake wall of windows propped open, overlooks the palm trees and the Pacific Ocean beyond. 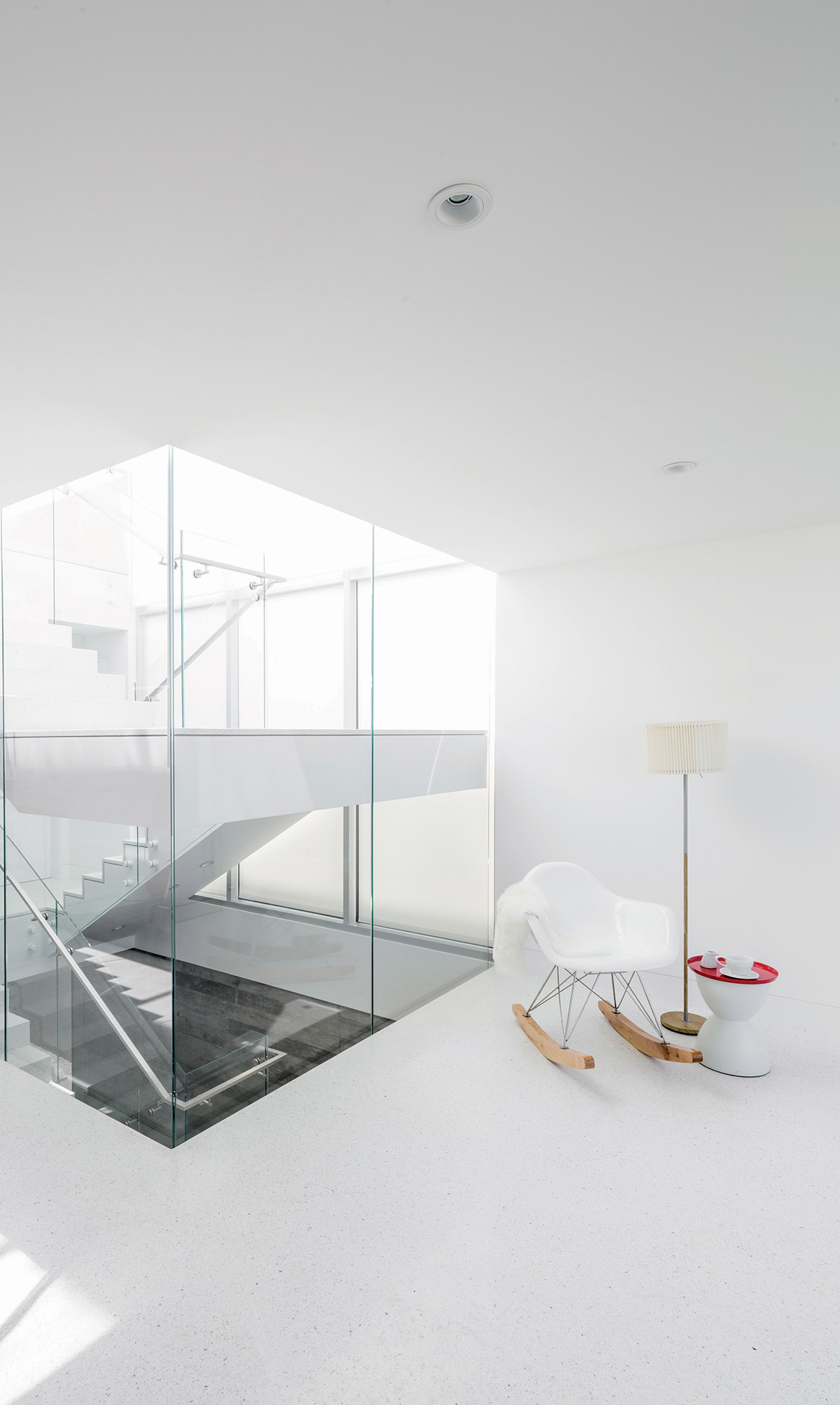 Landings are placed halfway up the stairwell on each floor, providing views above and below. 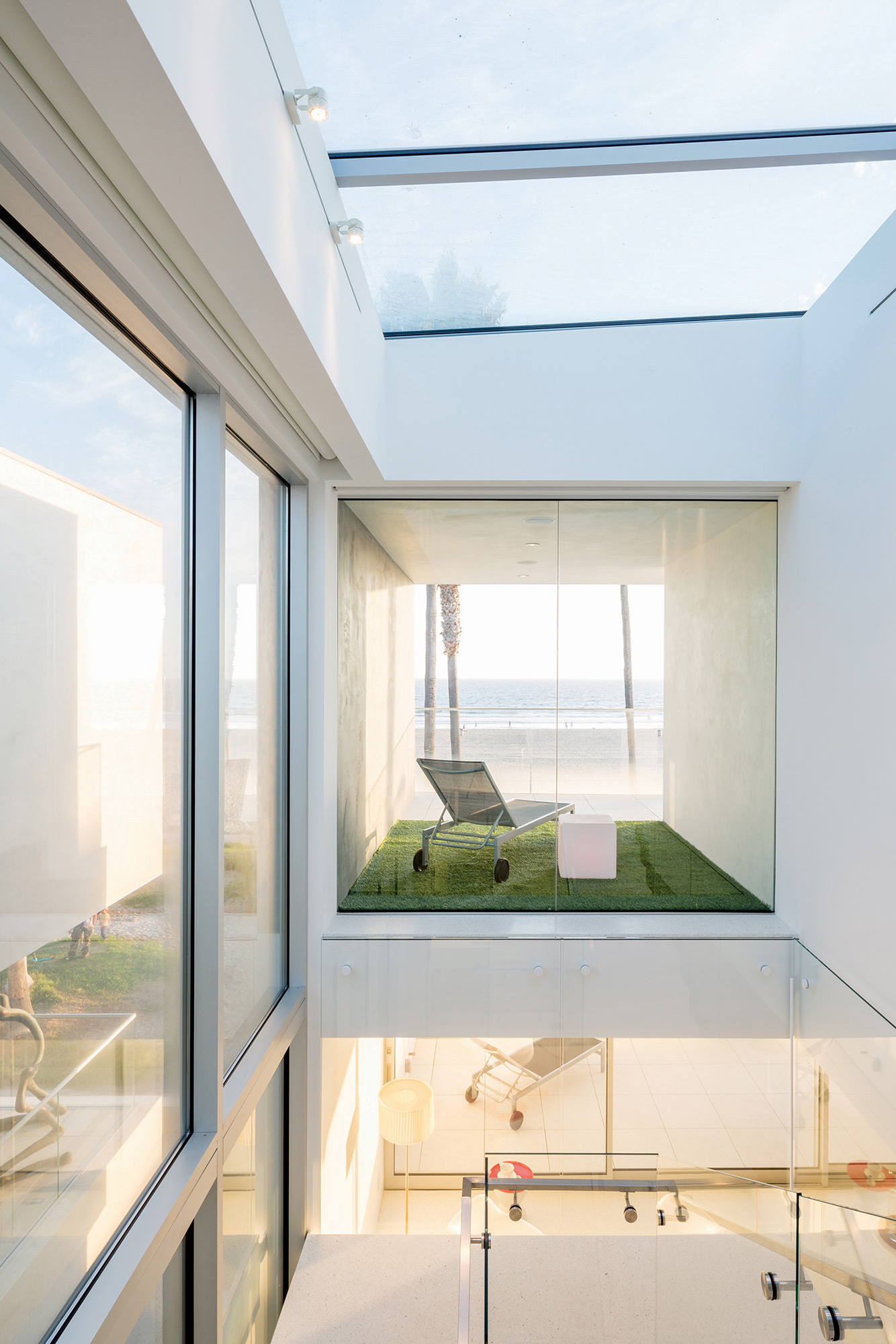 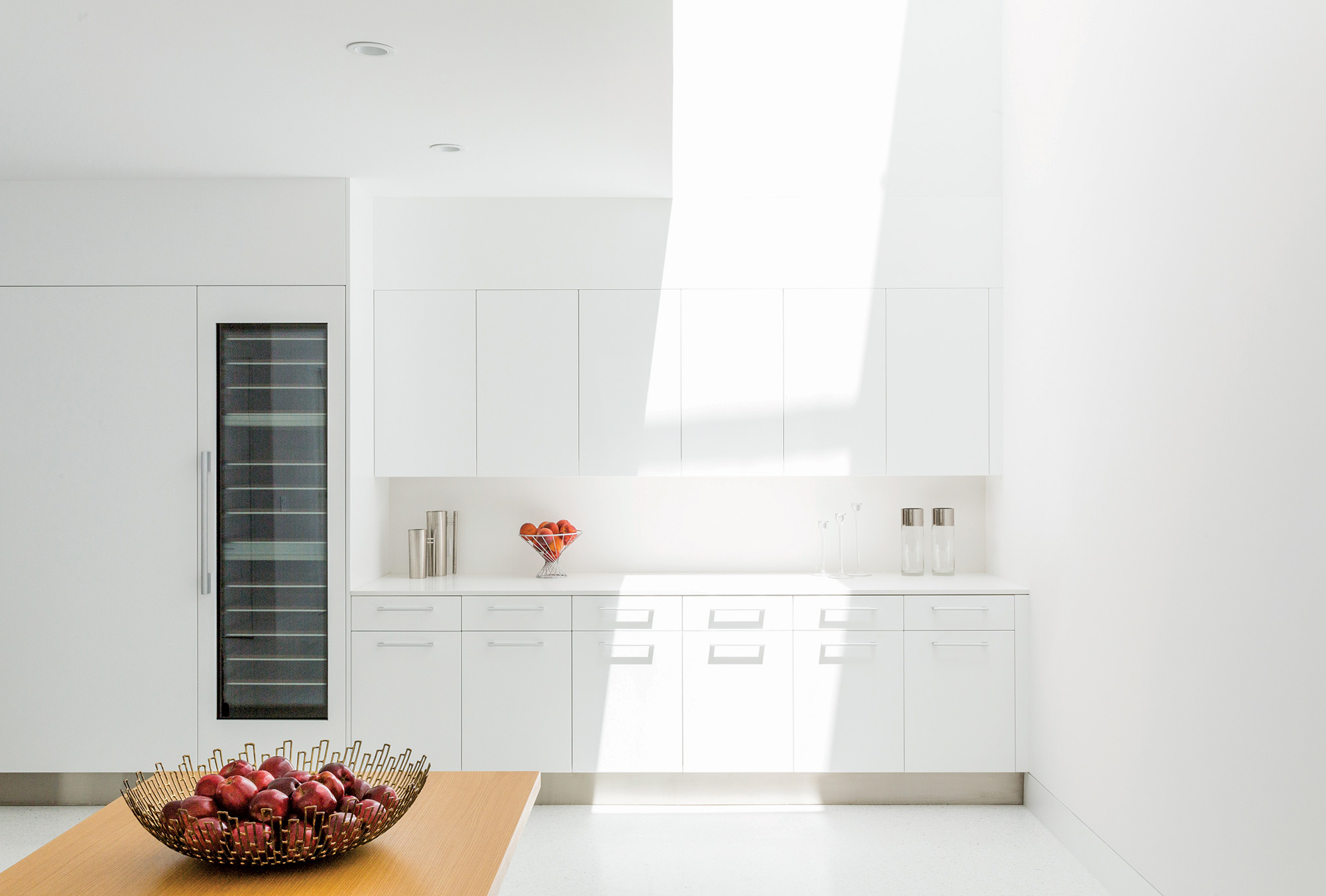 The kitchen’s design is minimalistic and crisp. 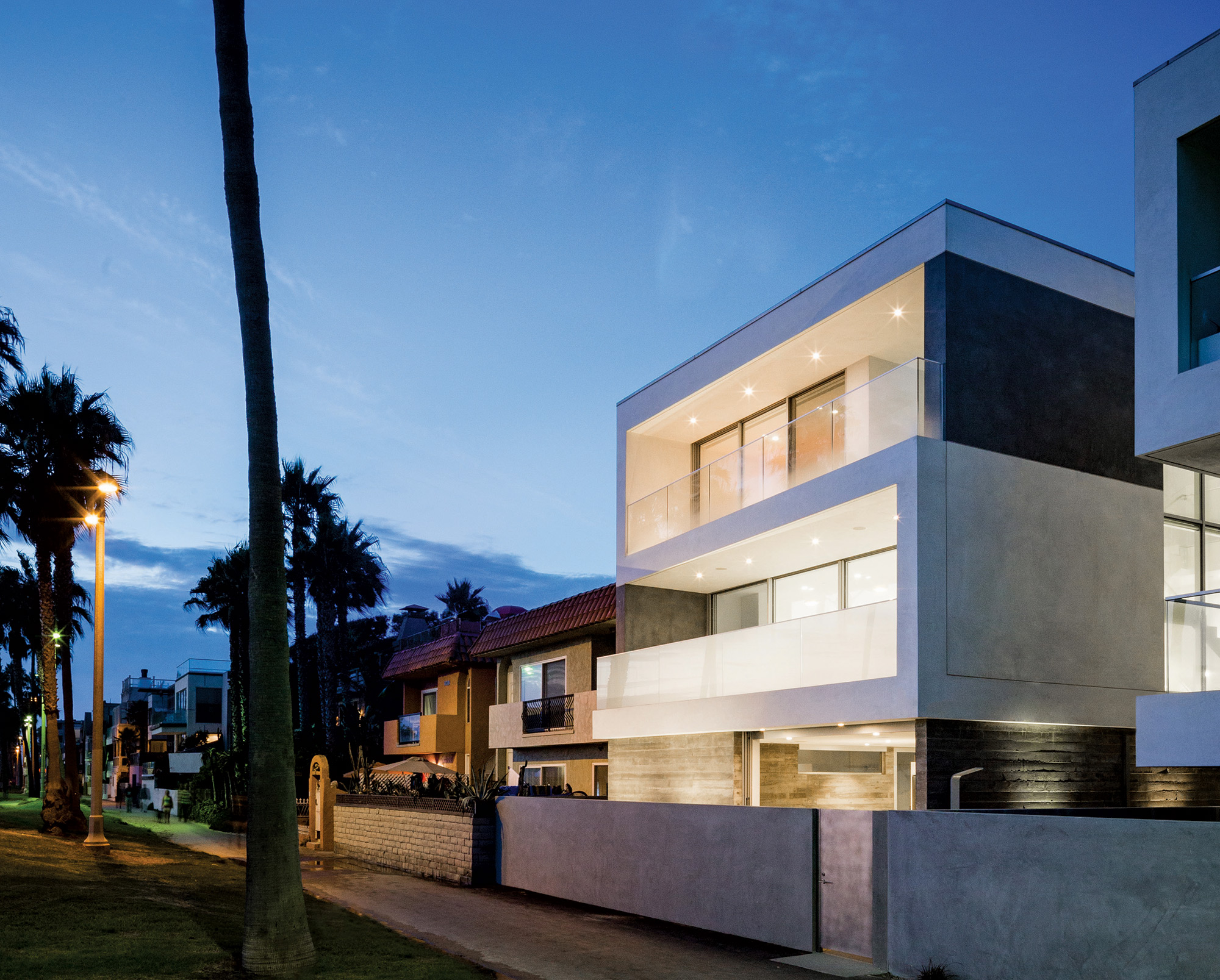 The Zig Zag House echoes the design of Flip Flop next door, but it’s unique in its use of dark gray stucco against white and the textured concrete walls on the lower floor. 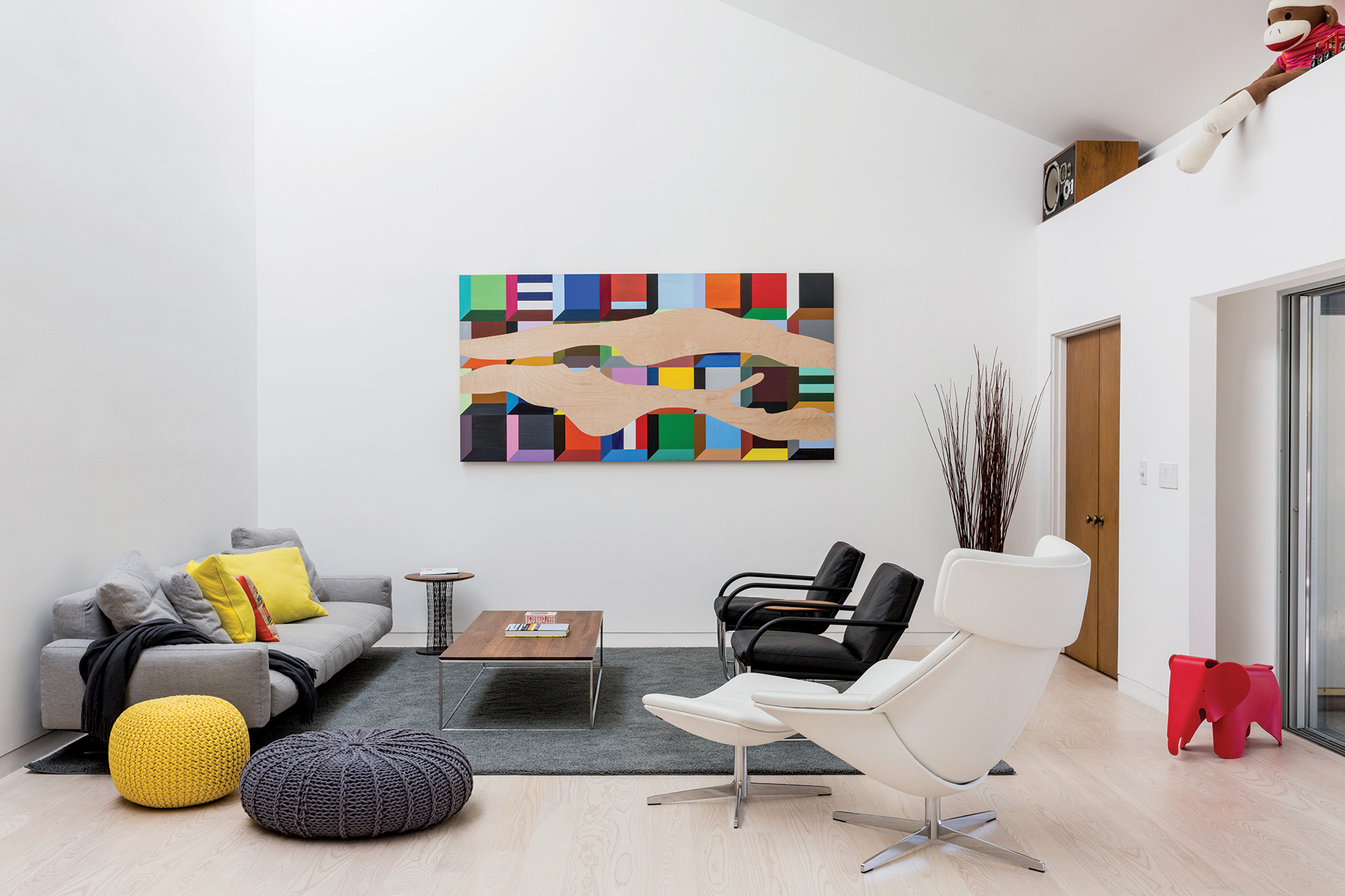 The living room is tucked into a corner of the open great room; vertical windows create a constant play of light. 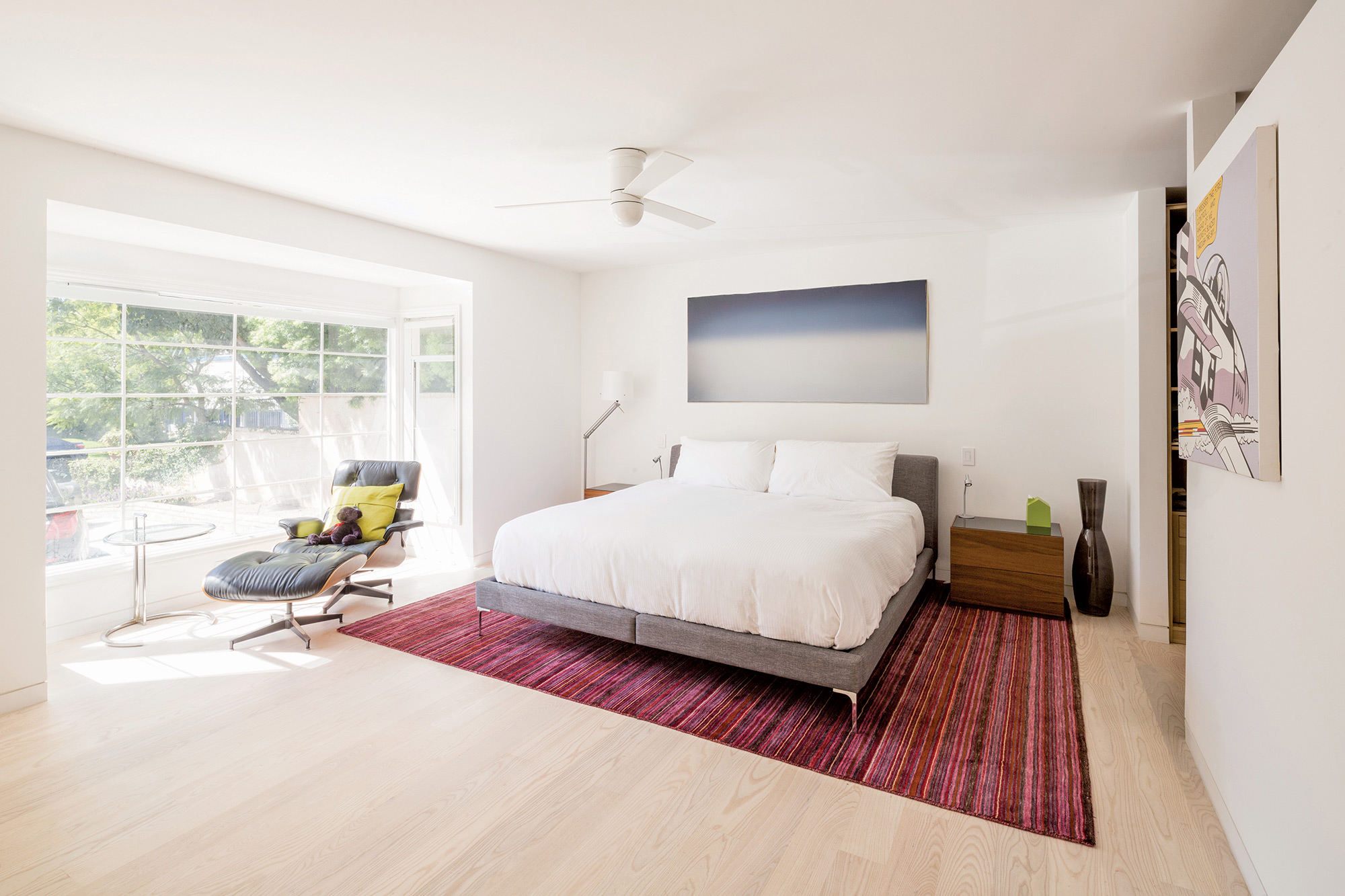 Light is a key design element in the master bedroom. 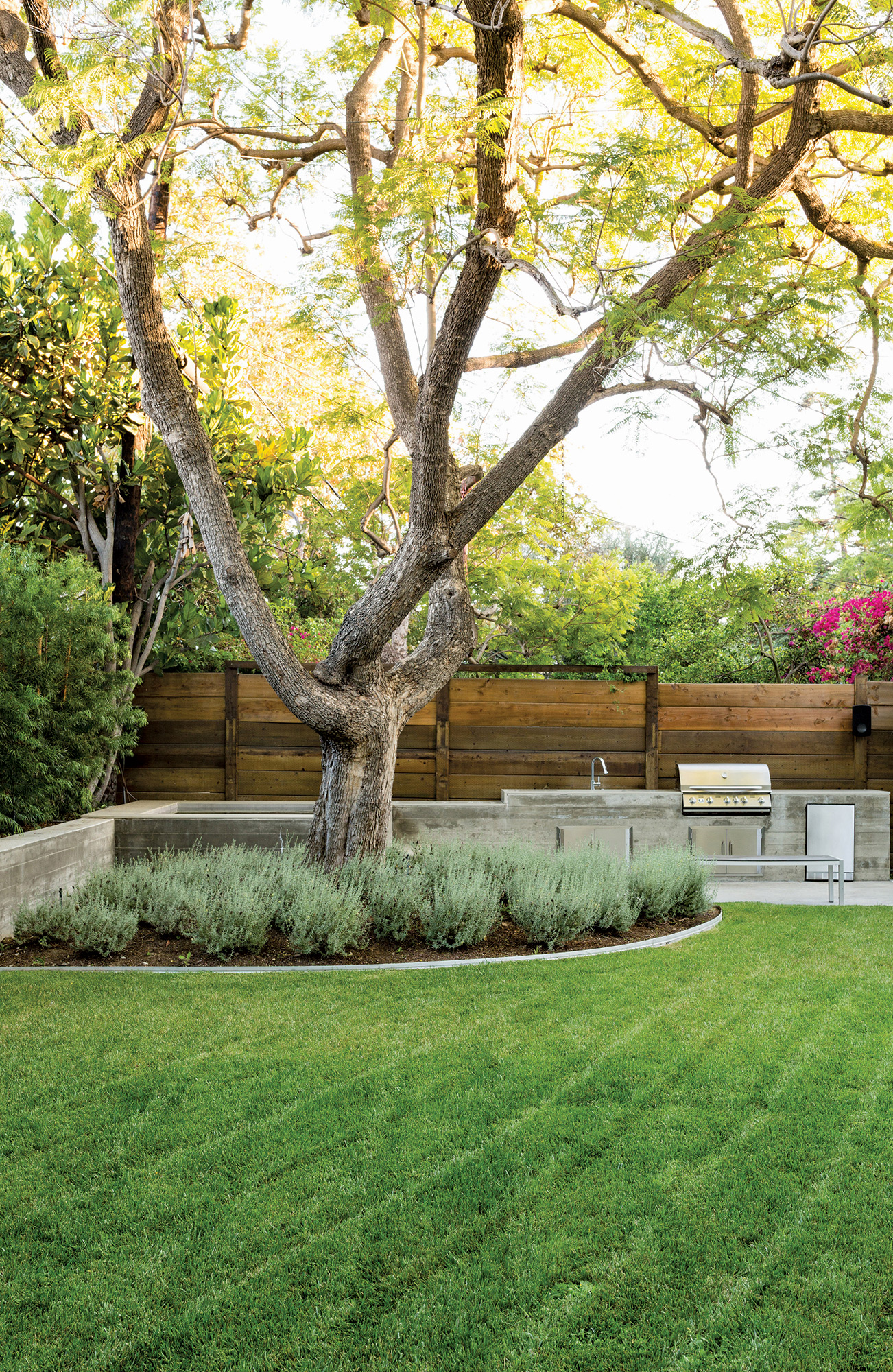 The backyard becomes another room where Brunn entertains around an outdoor kitchen and hot tub. 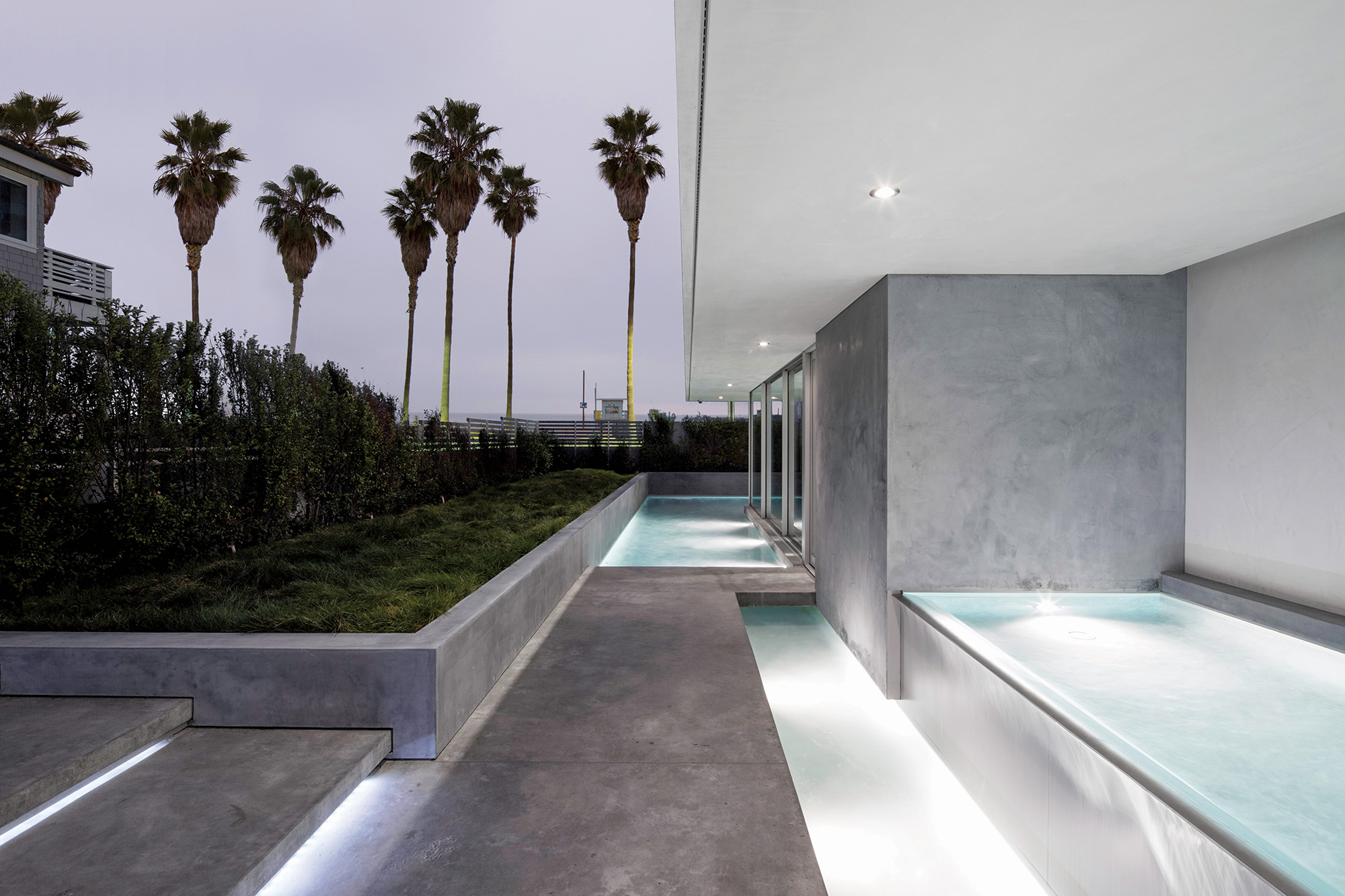 Outside, light is enhanced by reflecting pools. 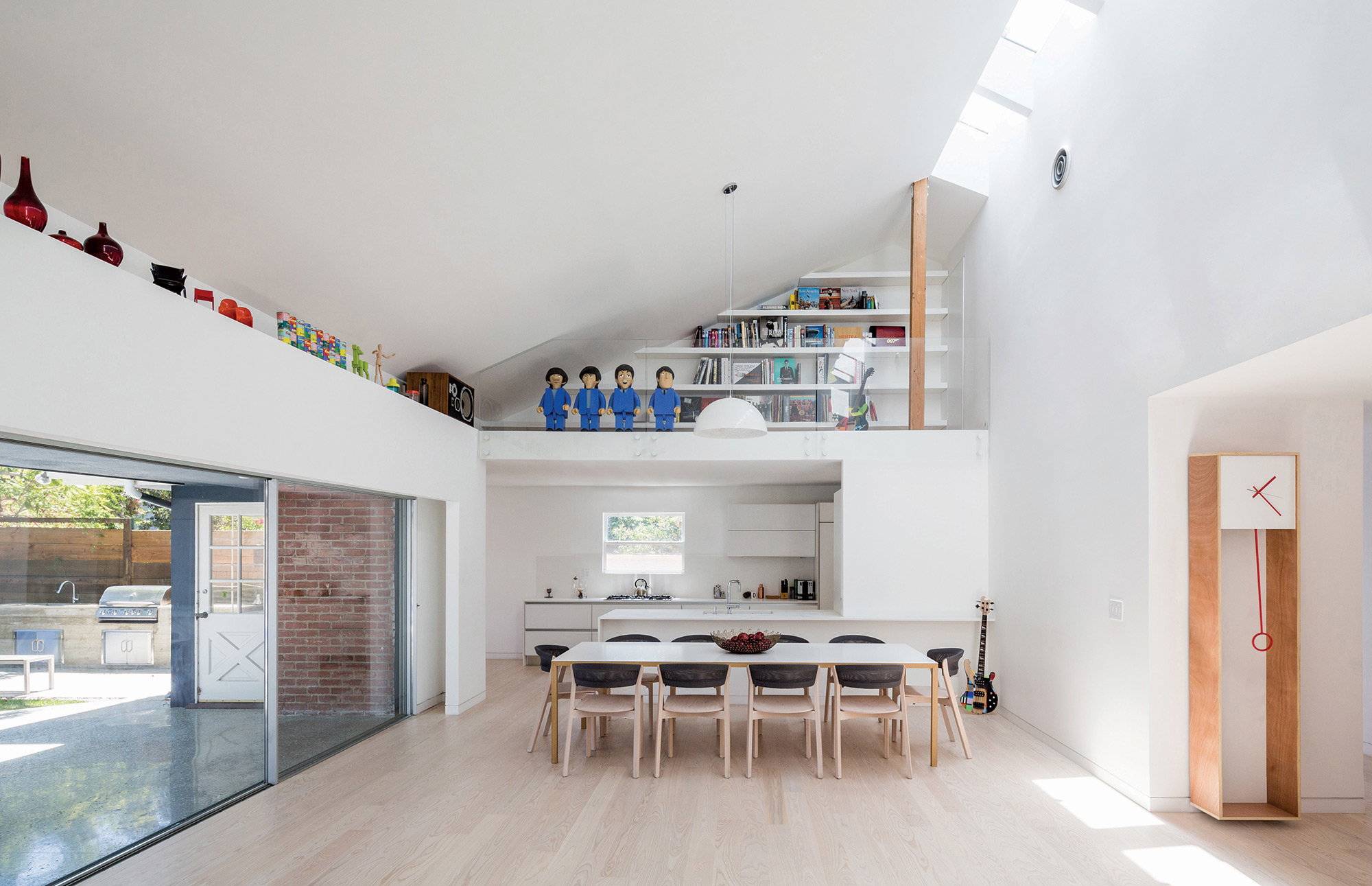 The great room in #9 Dream House was designed with an exposed peaked roof and a mezzanine for collectibles and music. 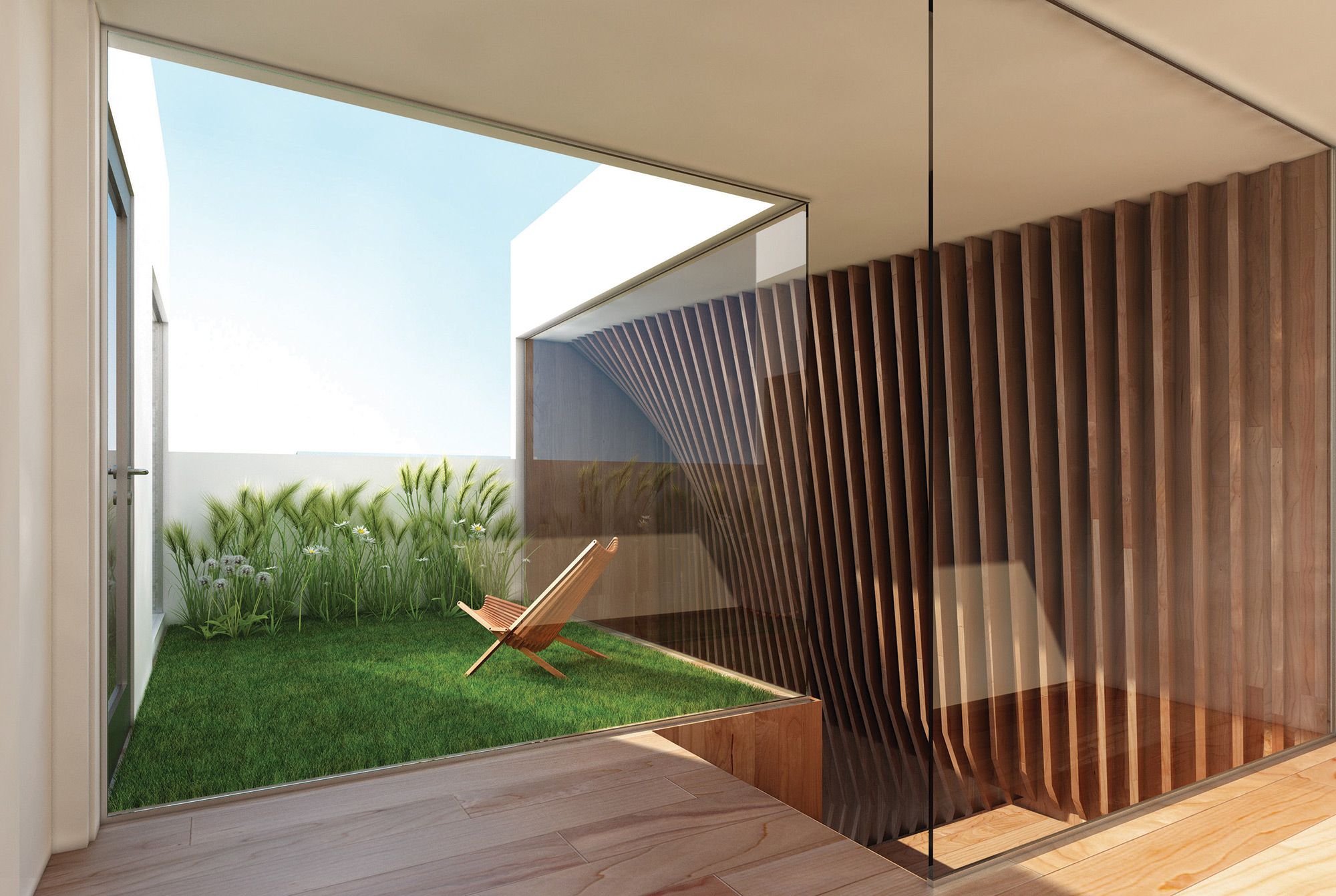