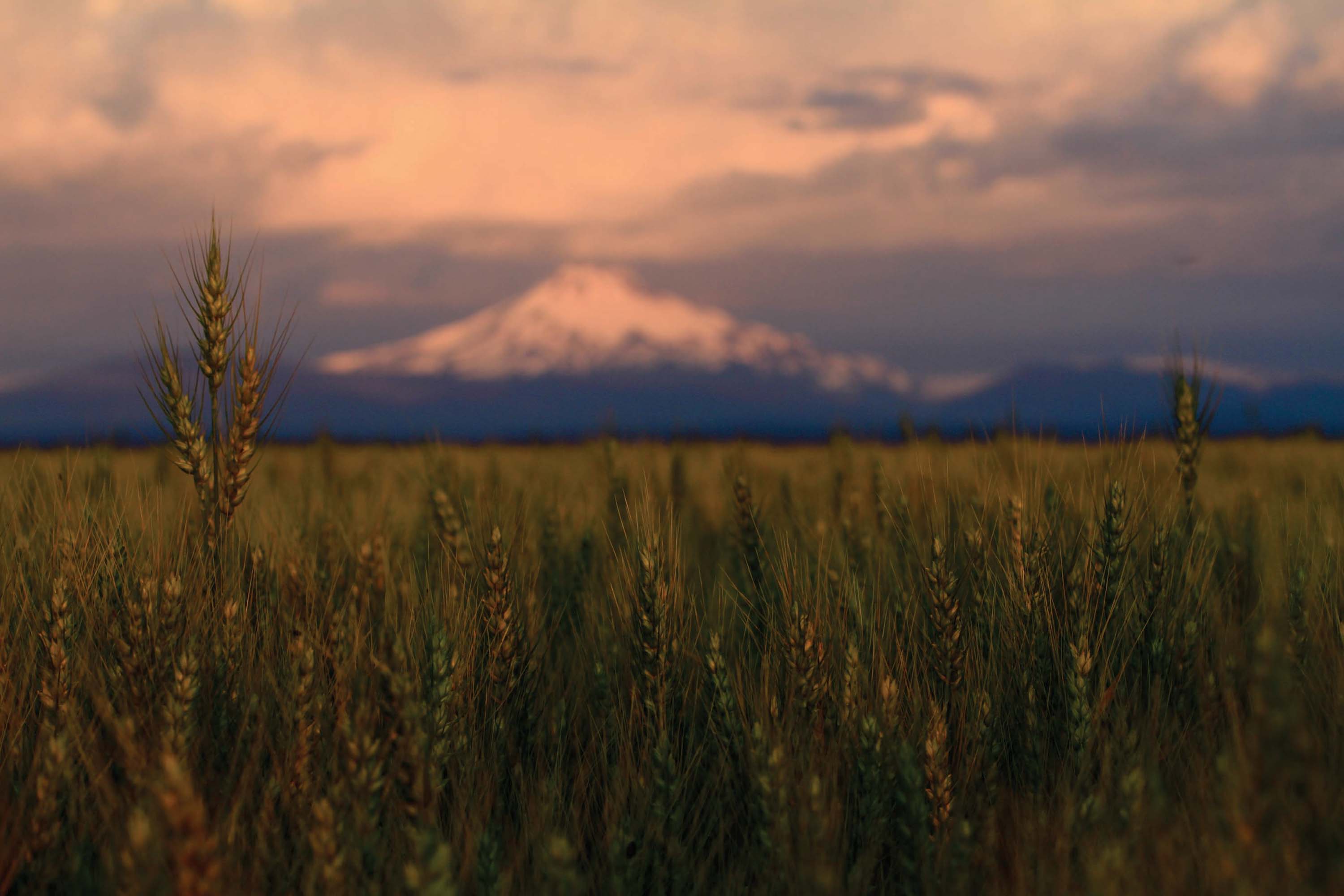 Sunset near Madras in Central Oregon.

Take a look at arty, sporty, vibrant Bend, Oregon, and it’s hard to believe this place was born a rough and shabby mill town that may have never become more. The city in Central Oregon was founded on the timber trade at the turn of the century and grew up slowly on the banks of the Deschutes River, the whole place nearly closing up shop when logging did.

That might have been the end of the story, but for a notion held amongst lovers of the outdoors — Central Oregon held some dandy secrets. The ski slopes of Mt. Bachelor, green golf courses, wide-open skies, gorgeous alpine lakes and trails and cool nights and sunny days were a powerful draw for vacationers. In the 1990s, folks began to come to stay. The population of Bend nearly tripled between 1990 and 2000, and grew by another half in the next decade.

Today it’s a small city of 80,000 that has more than once been called one of the best places to live in the United States. Visitors and locals struggle to choose which recreational, dining or event opportunity to partake of on a given day — there are too many to choose from.

All great Bend adventures, many think, should begin downtown, the picturesque, revitalized hub of the community, which sits alongside Drake Park and Mirror Pond on the Deschutes River and offers views of the Cascade Mountains. Stroll the 13-acre park to work up an appetite, as several of Bend’s best restaurants are downtown.

Fill up on Cajun Creole in a sleek atmosphere at Zydeco, or choose contemporary American at 900 Wall. You’ll find urban organic fare at 10 Below, located in a boutique hotel, The Oxford. Thirsty? To leave downtown without sampling a microbrew would be sacrilege. Bend is home to eight microbreweries, with another handful located in surrounding cities, and even more in the works. The region’s most famous was also Central Oregon’s first — Deschutes Brewery, founded in 1990. Its flagship brewpub offers pub fare alongside award-winning brews. Also downtown is Bend Brewing Company, another longtime pleaser of the hop-and-barley lover, which won best small brewpub of the year at the 2008 World Beer Cup.

Now for some shopping — don’t miss John Paul Jewelers on Bond Street, recognized for innovative, very cool pieces of jewelry, the result of blacksmithing techniques applied to metals. Another hip jewelry store, Silverado Jewelry Gallery, offers a beautiful selection of works — from stainless to sterling, pearls to turquoise — by local and regional artisans. Lulu’s Boutique boasts beautiful, flirty women’s clothing, and The Feather’s Edge sells gifts from wind chimes to ceramics. The Mockingbird Gallery — museumlike with its vast range of original artworks by emerging and important Western artists, as well as an impressive lineup of exhibitions — should not be missed.

When it’s time to turn in for the night, take a detour back to The Oxford Hotel. Melding luxury and sustainability beautifully, this boutique lodging is noted for its stunning design and décor, which blends a thoroughly modern aesthetic with themes reflecting the region’s Old West roots. Look for ceramic antlers, cross sections from fir trees hung as art and tree stumps replicated in fiberglass. If your tastes trend funkier, you’ll love McMenamins Old St. Francis School; the walls are literally covered with murals of fanciful and fabulous subjects, many of which depict Bend’s history. The Pine Ridge Inn offers a tranquil getaway overlooking the Deschutes River and Farewell Bend Park. Luxury suites offer amenities ranging from fireplaces to Jacuzzis, and the food — from chef’s breakfasts to afternoon appetizers with wine and microbrews — is mouthwateringly good.

From downtown, wind your way around Bend — literally — through the city’s roundabouts. A display of art has been installed in each; the more celebrated are Phoenix Rising (also known as the “flaming chicken”) at the corner of Galveston and 14th, Redsides, metalsmithed Redside trout that change direction with the wind, and Yakaya, in Riverbend Community Park, a sort of large-scale floral arrangement made of kayaks.

The Old Mill District is a high-end shopping and dining destination on the banks of the Deschutes River where Bend’s early mills once processed trees. Today the offerings are a bit classier. Lahaina Art Gallery offers paintings, sculptures and canvas giclee; Tumalo Art Company offers oil, acrylic, mixed-media, ceramics, glass and photography. Just over the footbridge is the Les Schwab Amphitheater, which hosts live music each season, some for free, on the banks of the Deschutes River. The sunsets here do their best to outperform the musicians. Bend is home to dozens of other events throughout the year, including the BendFilm Festival, which shows independent films from across the nation every year in early October. Shakespeare in the Park wows guests with iambic pentameter under summer stars and Balloons over Bend lights the sky with colorful hot air balloons each July.

If you still have time, take in a little of what drew folks here in the first place — the gorgeous outdoors. The Cascade Lakes Highway travels west out of town past snowy peaks including Mt. Bachelor, as well as several crystal-blue alpine lakes. Head east into the high desert to see native old growth juniper and sagebrush against a backdrop of rim rock. To the north is Powell Butte, a historic farming community and home to the luxury resort Brasada Ranch, which offers a traditional Western experience including horseback riding complemented by lodging, spa, pool and to-die-for cuisine. To the south, The High Desert Museum is an exceptional natural and cultural history museum boasting a huge collection of Native American art, Western sculpture and paintings, and live animals.

Sleepy mill town, no longer. A vacation to Central Oregon is a rich cultural experience surrounded by a stunning landscape. 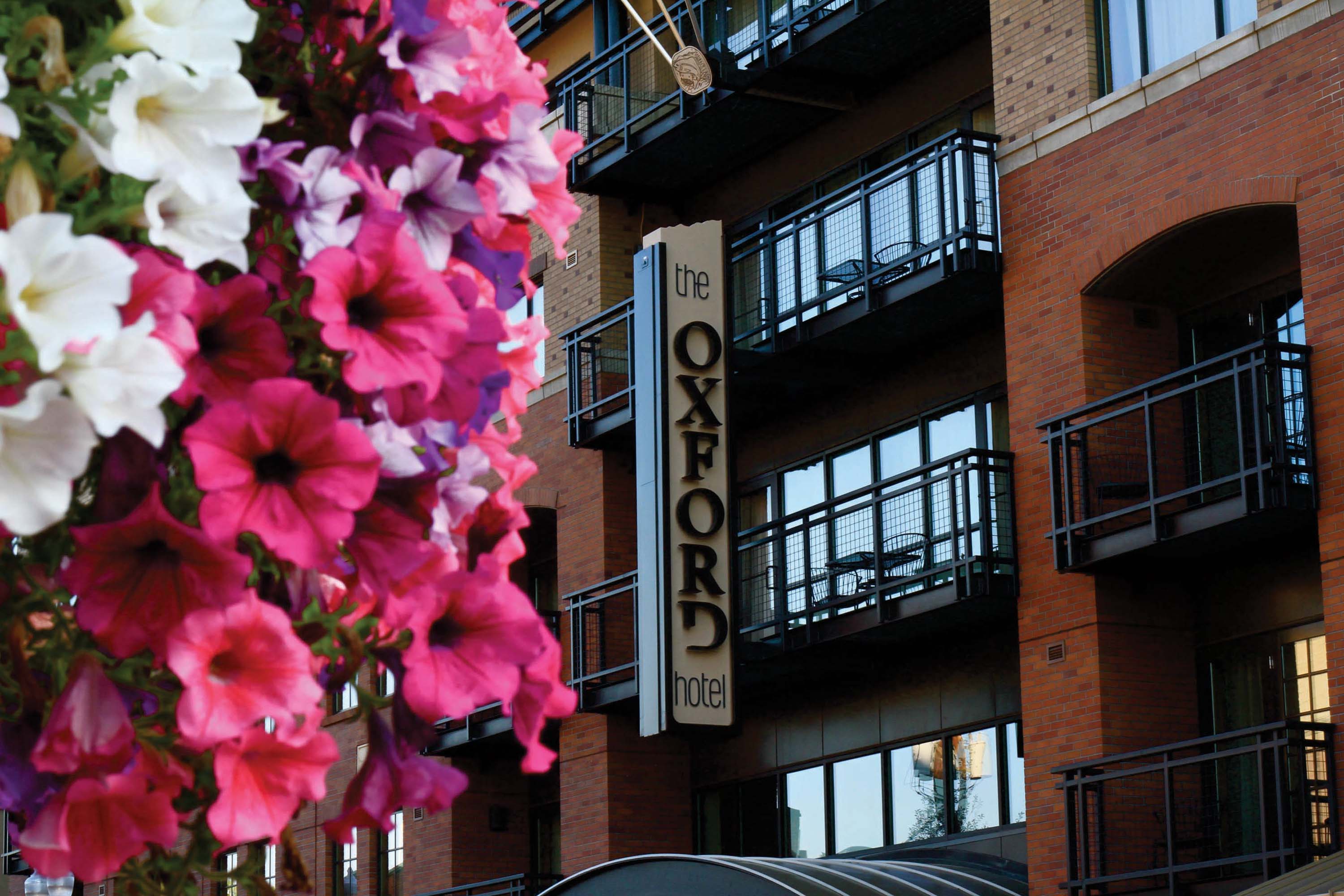 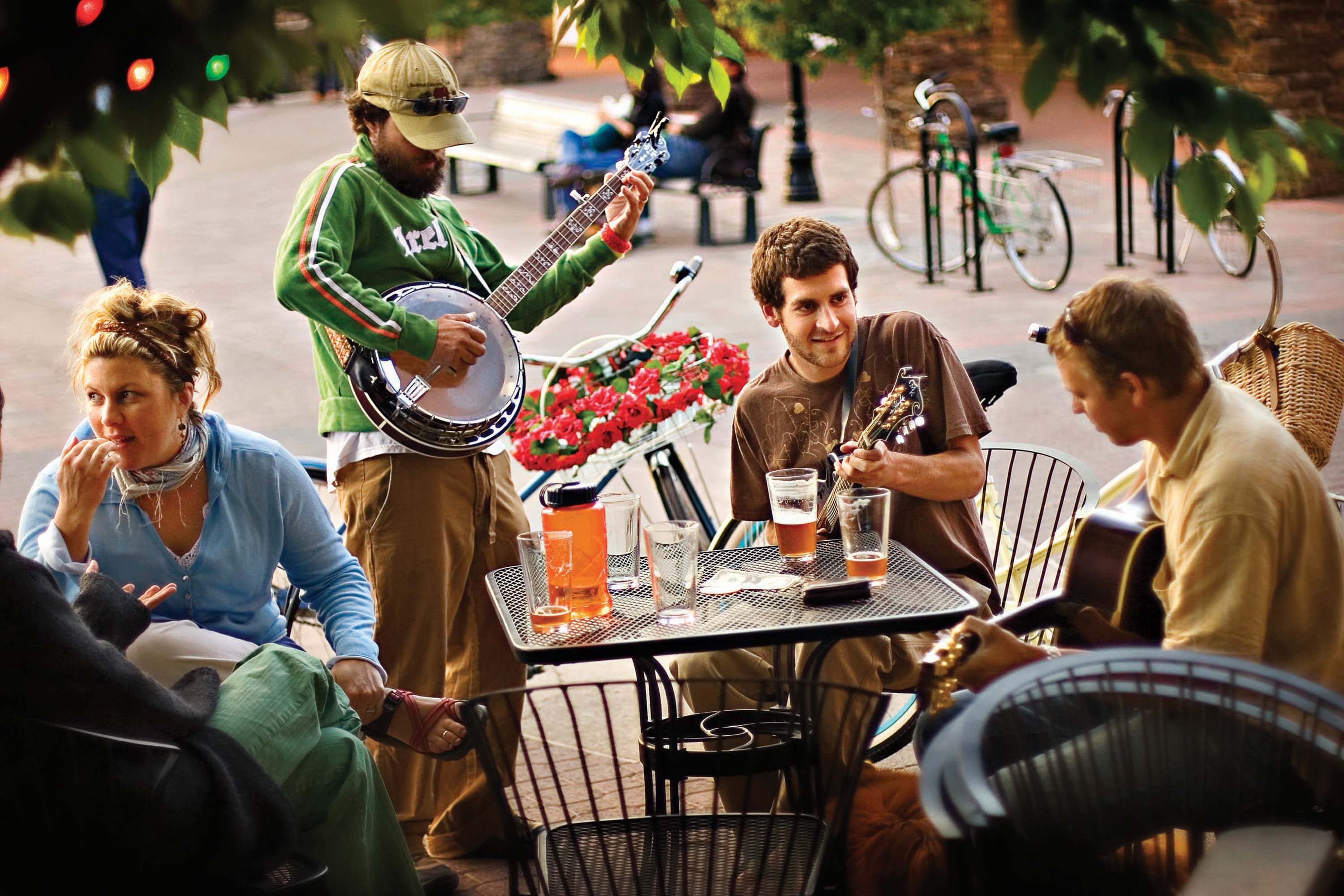 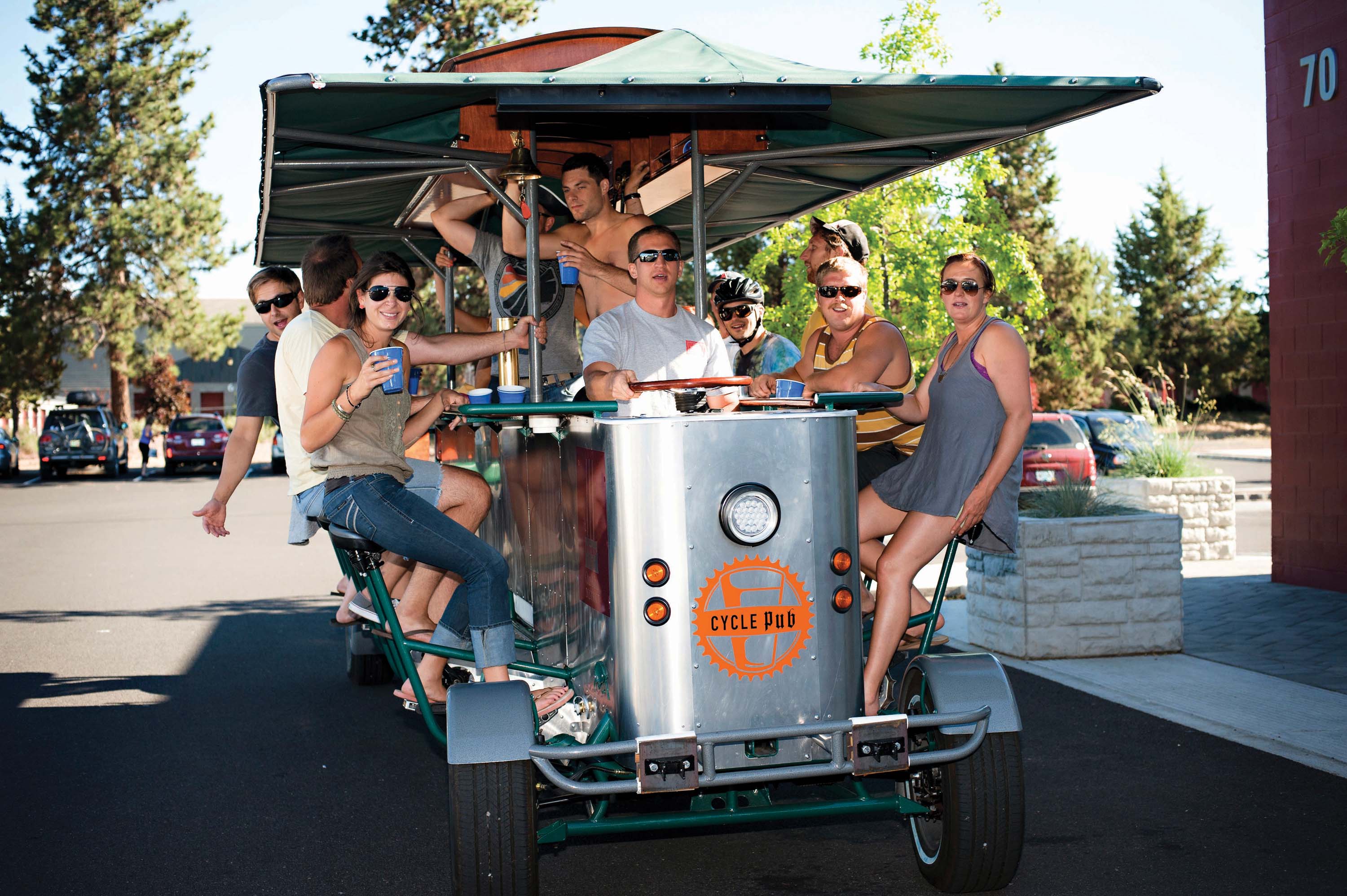 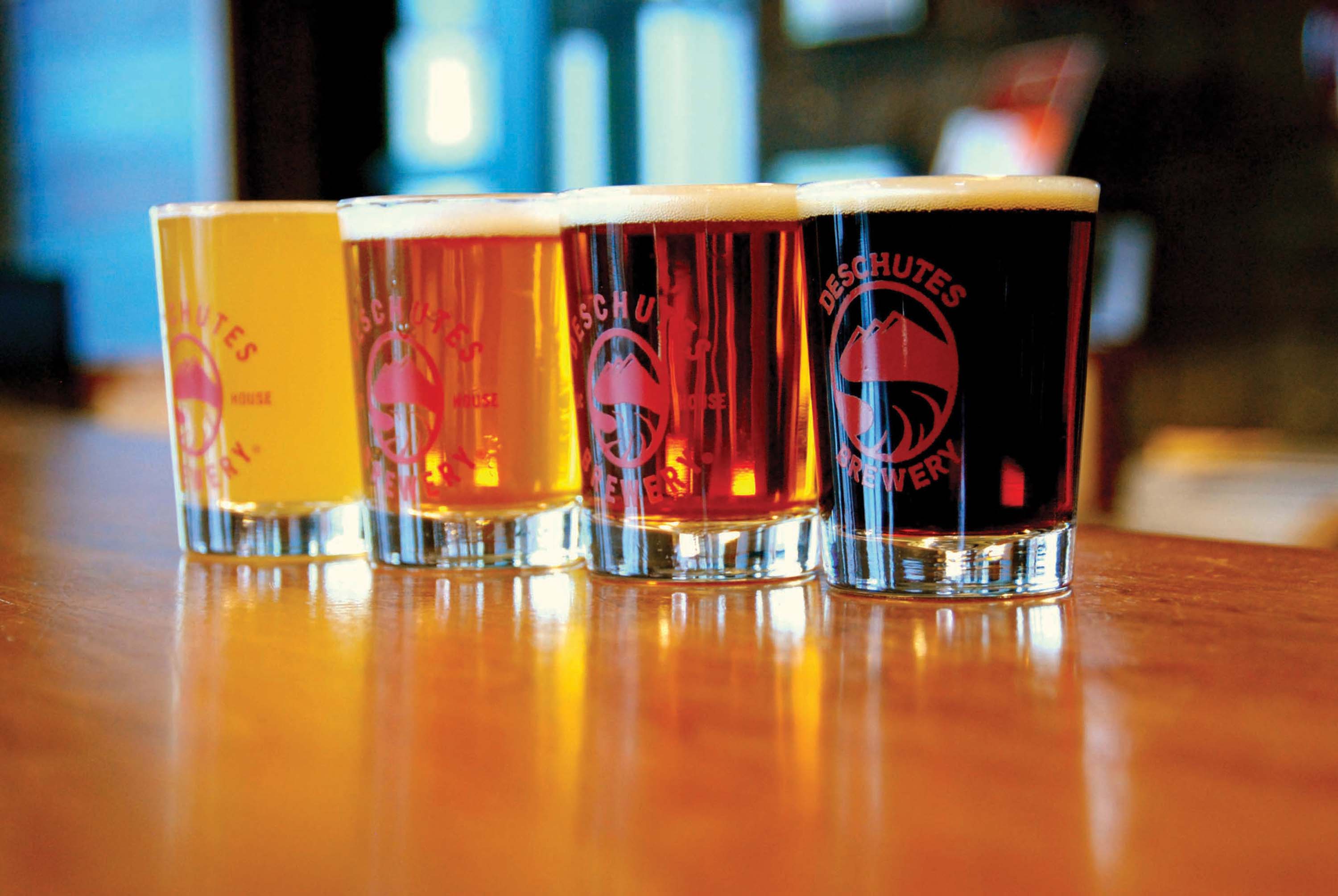 A rainbow of beer tastes at Deschutes brewery. 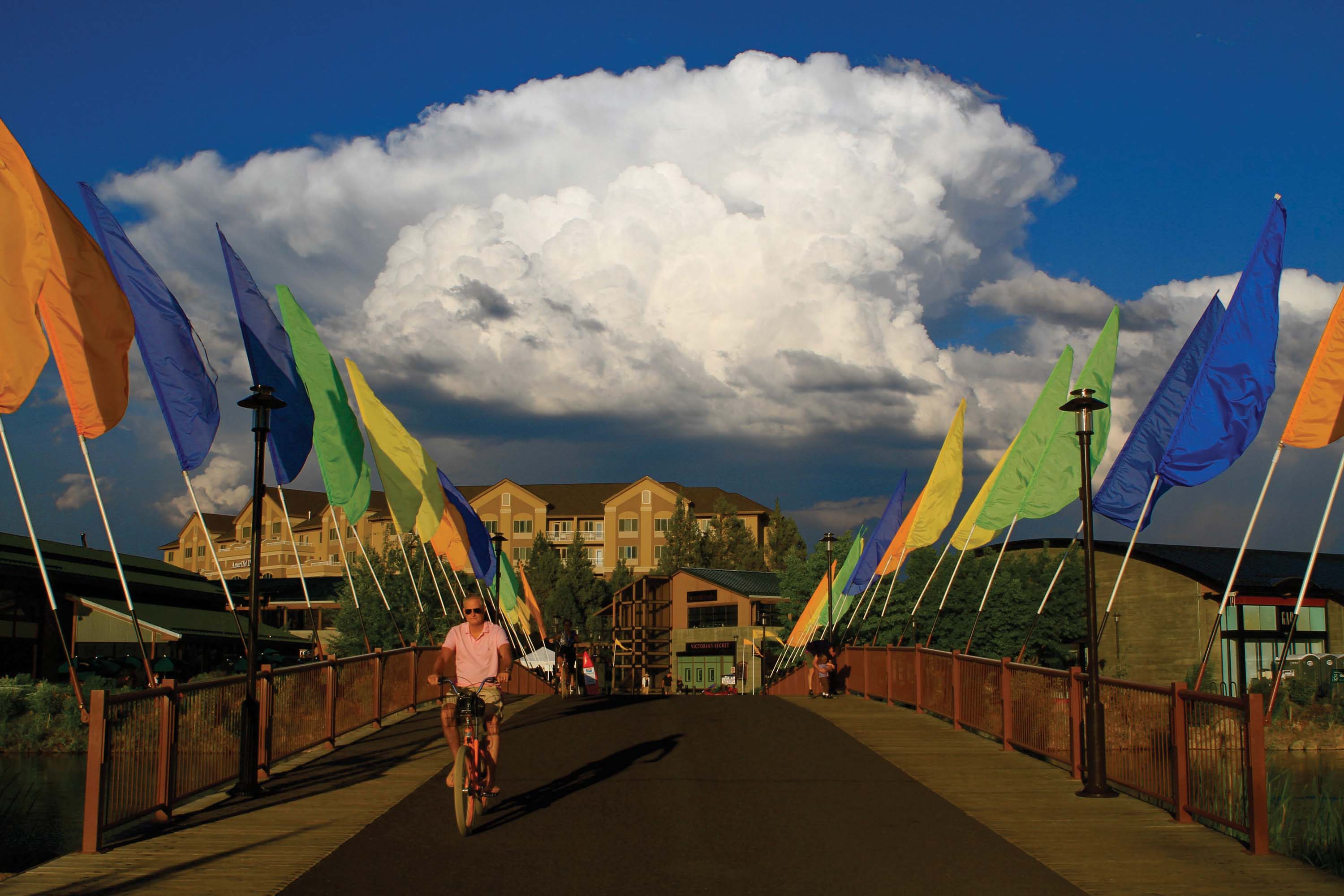 The flags on the bridge over the Deschutes River change color with the seasons. Here, a cyclist enjoys summer. 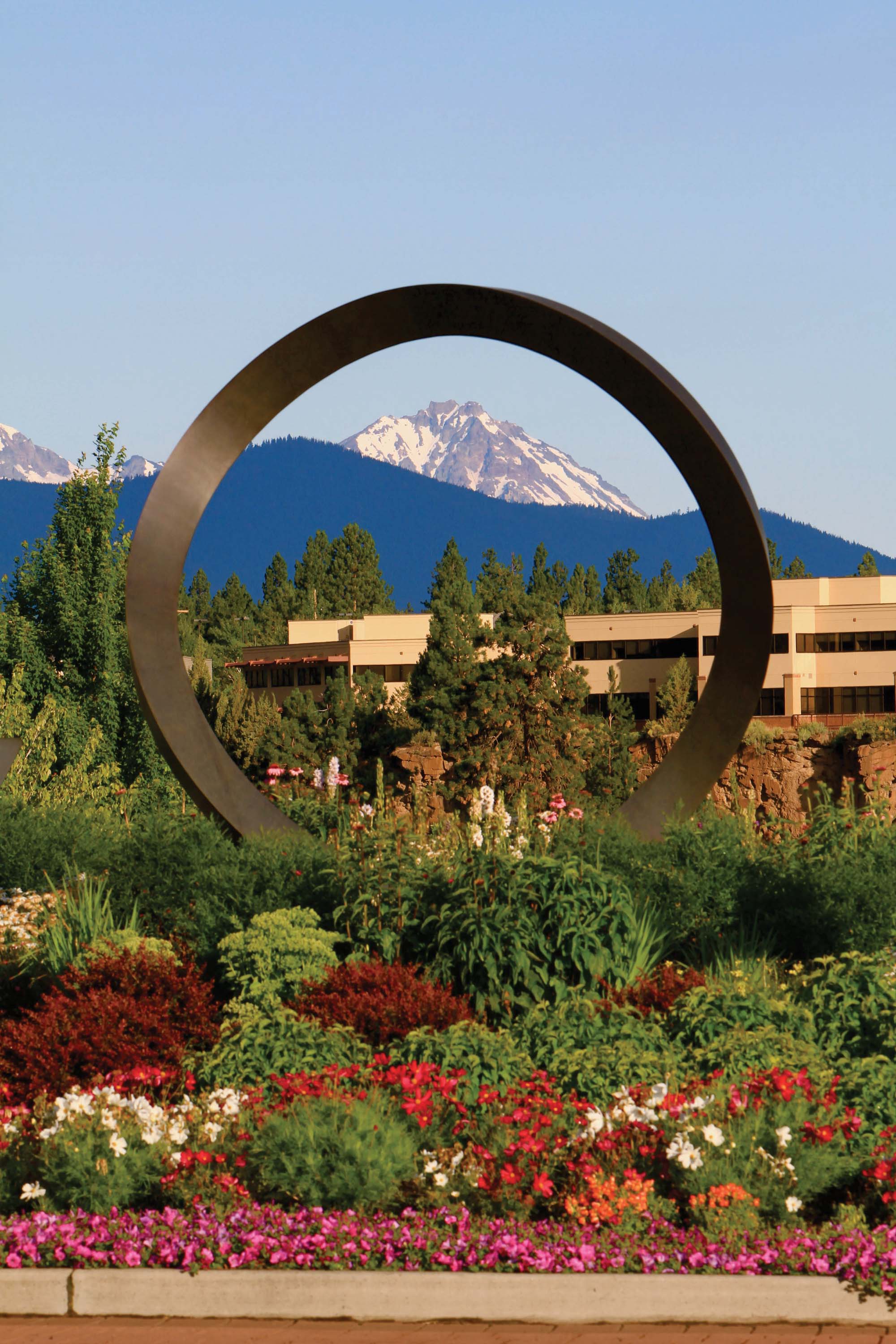 Just one of many eclectic sculptures that make up Bend’s Roundabout Art Route, “Lodestar” overlooks the Cascade Range from Reed Market Road. 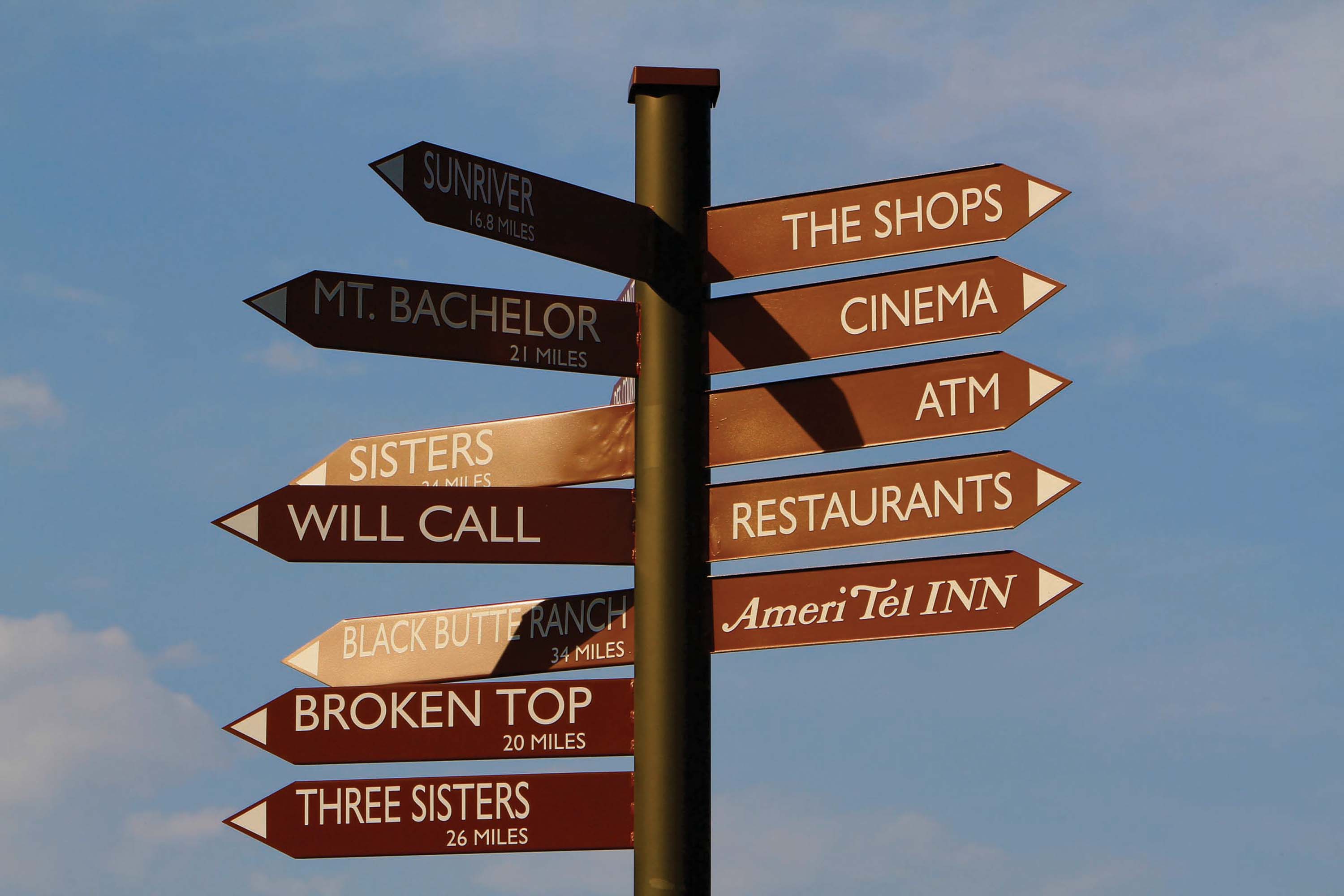 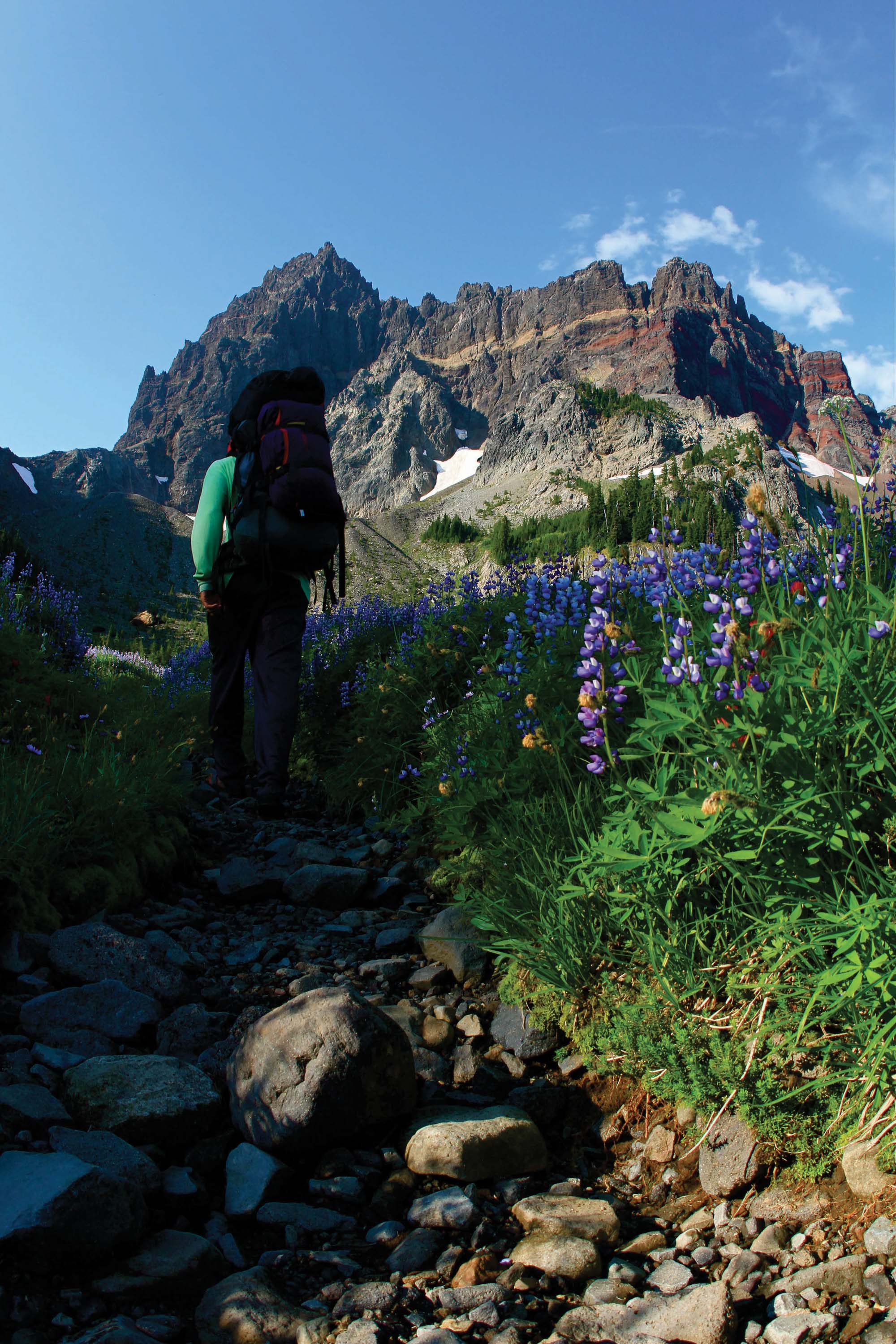