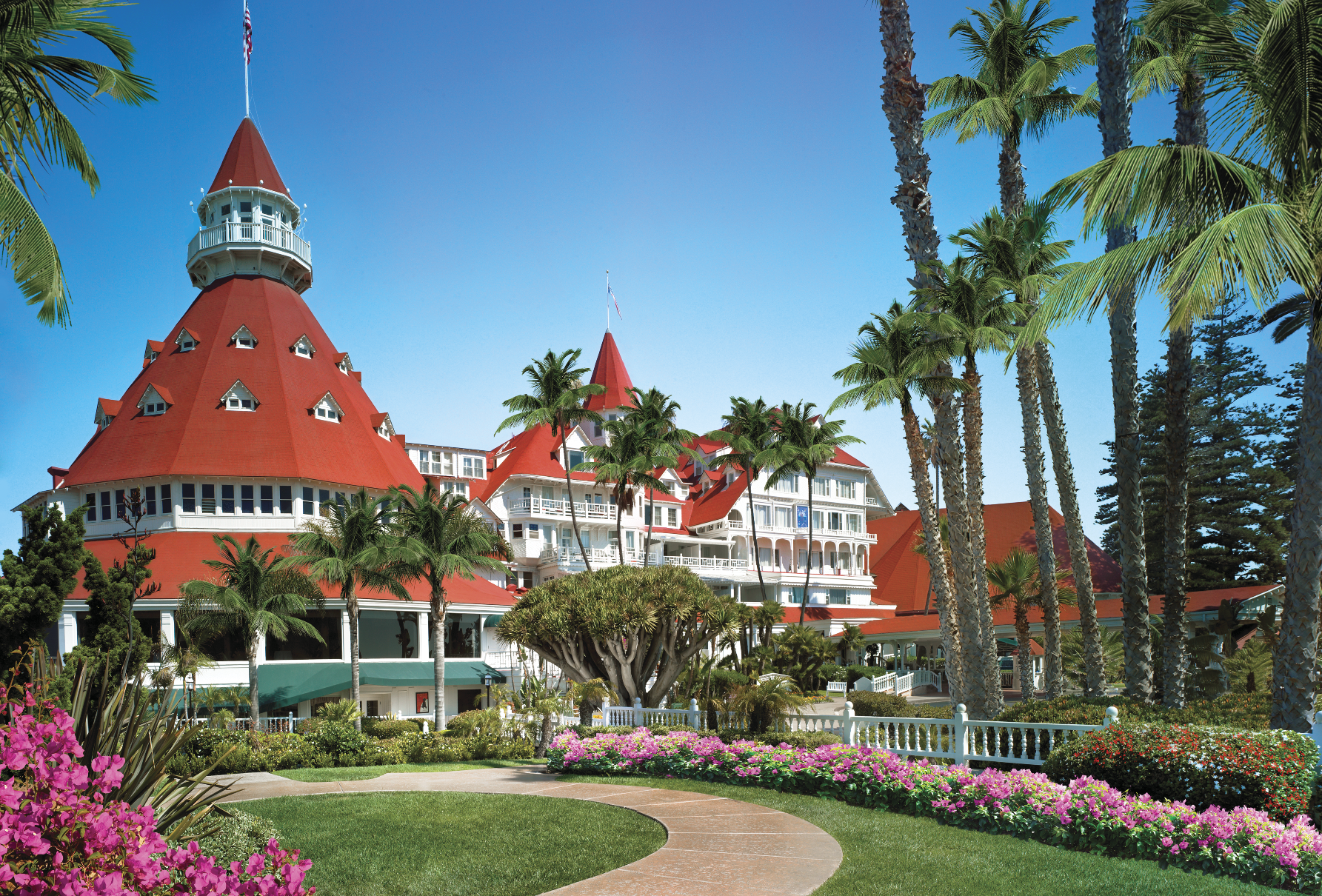 She’s a redhead and she’s known as “The Grand Lady by the Sea.”

With her whitewashed exterior of scalloped wood shingles and her steeply pitched roofs in brilliant red, the Hotel del Coronado personifies Queen Anne Victorian architecture. Her hodgepodge of turrets, gables and cupolas epitomize Gilded Age exuberance. Built in 1888, the lavish Queen Anne style was newly in vogue and this grand Victorian lady flaunted it at every turn.

Upon its completion, the California Architect and Building News wrote that the hotel was “perhaps the largest and most gorgeous in its appointments of any hotel in the world.” For certain, it was one of the world’s largest hotels at the time, with 400 rooms sprawled over 28 acres of beachfront property on Coronado, sometimes referred to as “Coronado Island.”

With its extensive beachfront verandas and unmistakable cone-shaped corner wing, the Hotel del Coronado was one of the first outside of New York City to use electric lighting — Thomas Edison supervised the installation of his incandescent lamps. Designed to serve the mega-rich of the late 19th century, it also featured many luxuries for its day, including telephones, elevators and even water under pressure in the bathrooms.

Its architect was a mere 34 years old; a product of New Brunswick, Canada, James Reid [1851–1943] had attended the Massachusetts Institute of Technology (MIT) and the Ecole des Beaux-Arts in Paris, France. One of three brothers, all architects, the Reid brothers would go on to complete scores of mansions, theatres, commercial buildings and wonderfully crafted skyscrapers throughout the Pacific Coast — including buildings in Portland, Los Angeles, Oakland, San Diego and Spokane — with the bulk of their work being done in the San Francisco Bay area.

Over its lifetime The Del, as it is fondly called, has undergone upgrades, additions and remodels. The mammoth property now contains 680 rooms and suites, including a cluster of luxury oceanfront villas. Recently, an $8-million-dollar renovation of its 368 guestrooms in the original 124-year-old Victorian building was unveiled. The design blended the historic architecture with modern comforts including 42-inch flat-screen televisions.

Conceived by Looney & Associates, the design philosophy for the project was “softly contemporary with historical and regional references.” The goal was “to introduce a more current, clean-lined direction without losing the sense of place and beauty for which The Del is known.” Now, this California icon has been transformed, defining modern luxury while retaining classic elegance and period style.

“As stewards of this national treasure, we are thrilled to unveil these latest enhancements and know that our guests will also share in our excitement,” says Todd Shallan, Vice President and General Manager.

Named by USA Today as one of the Top 10 Resorts in the World, The Travel Channel voted The Del the number two best place in the world to get married. Among its other accolades are that 11 U.S. presidents have been guests of the hotel, and it is home of a celebrated resident ghost, one Kate Morgan, who committed suicide there in 1892. Hollywood, too, found favor at The Del, filming Billy Wilder’s 1959 classic, Some Like It Hot, with Marilyn Monroe, Jack Lemmon and Tony Curtis. Wizard of Oz  author L. Frank Baum wrote much of his classic children’s tale at The Del and even based the overall look of The Emerald City on the hotel’s architecture.

Designated a National Historic Landmark in 1977, the Hotel del Coronado is one of the last remaining examples of American Victorian wooden beach resorts. 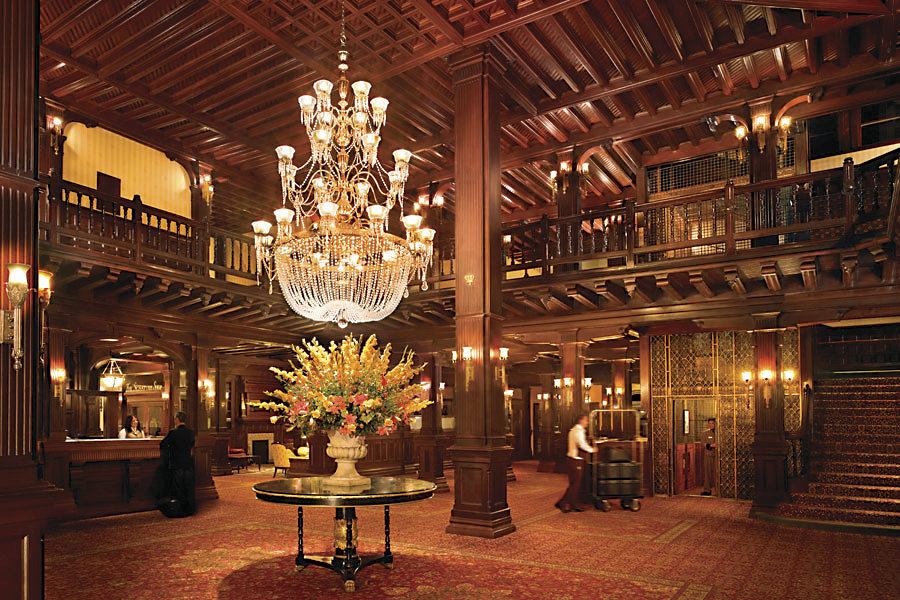 The grandeur of the lobby remains much as it was when it was first built in 1888. 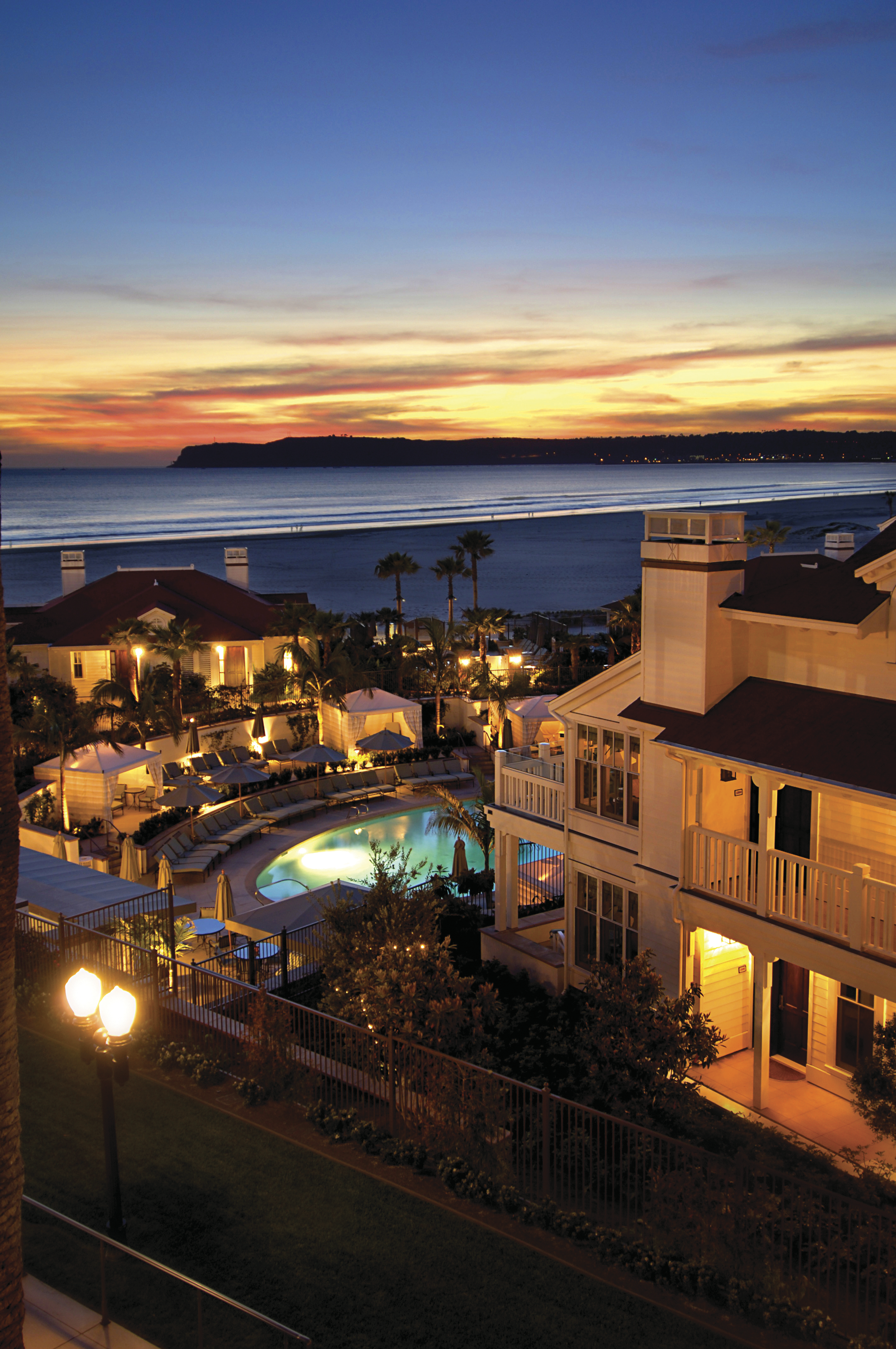 A cluster of luxury ocean-front villas are a part of the sprawling 28 acre property. 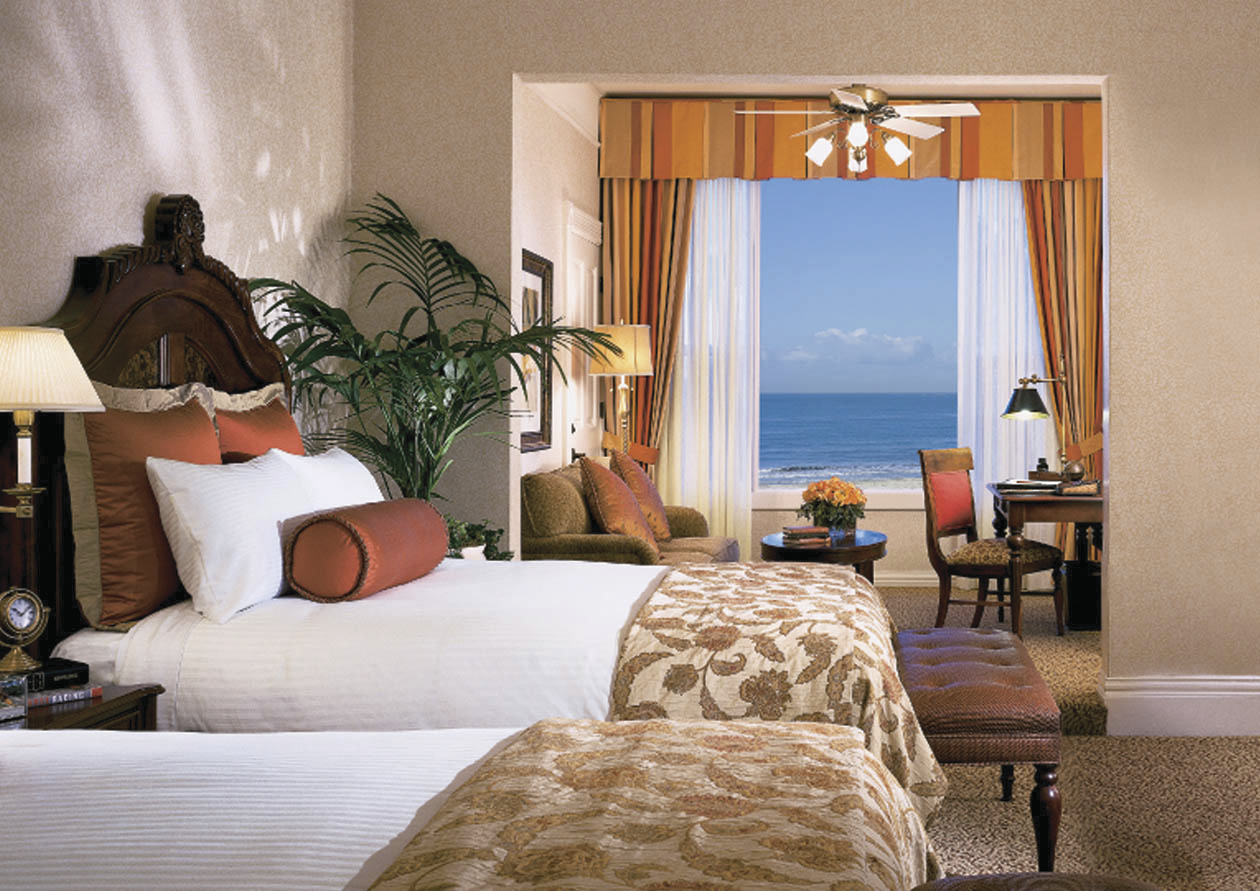 The ocean can be seen from a guest room, where the beach stretches for miles. 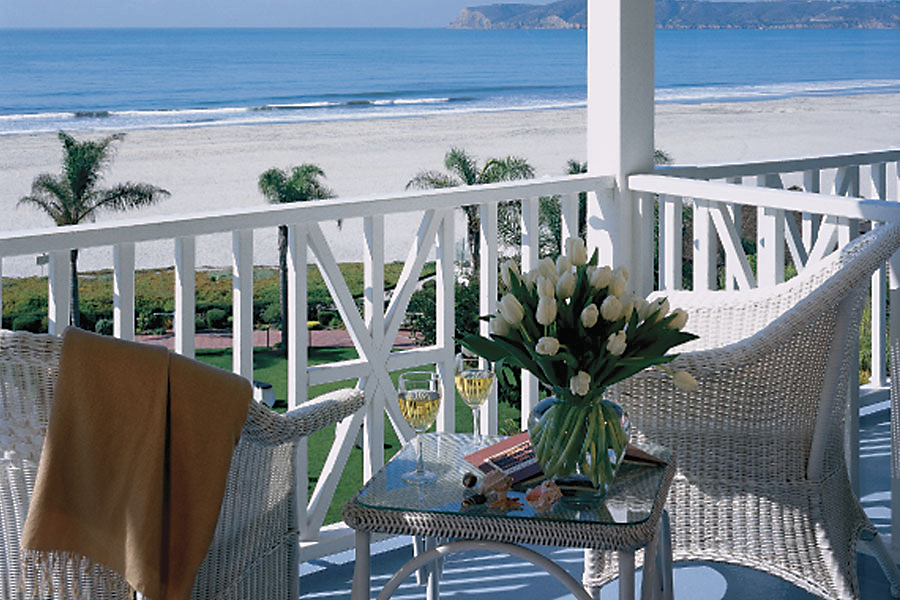 A recent renovation of its original guestrooms in the 124-year-old Victorian building blends history with modern day comforts. 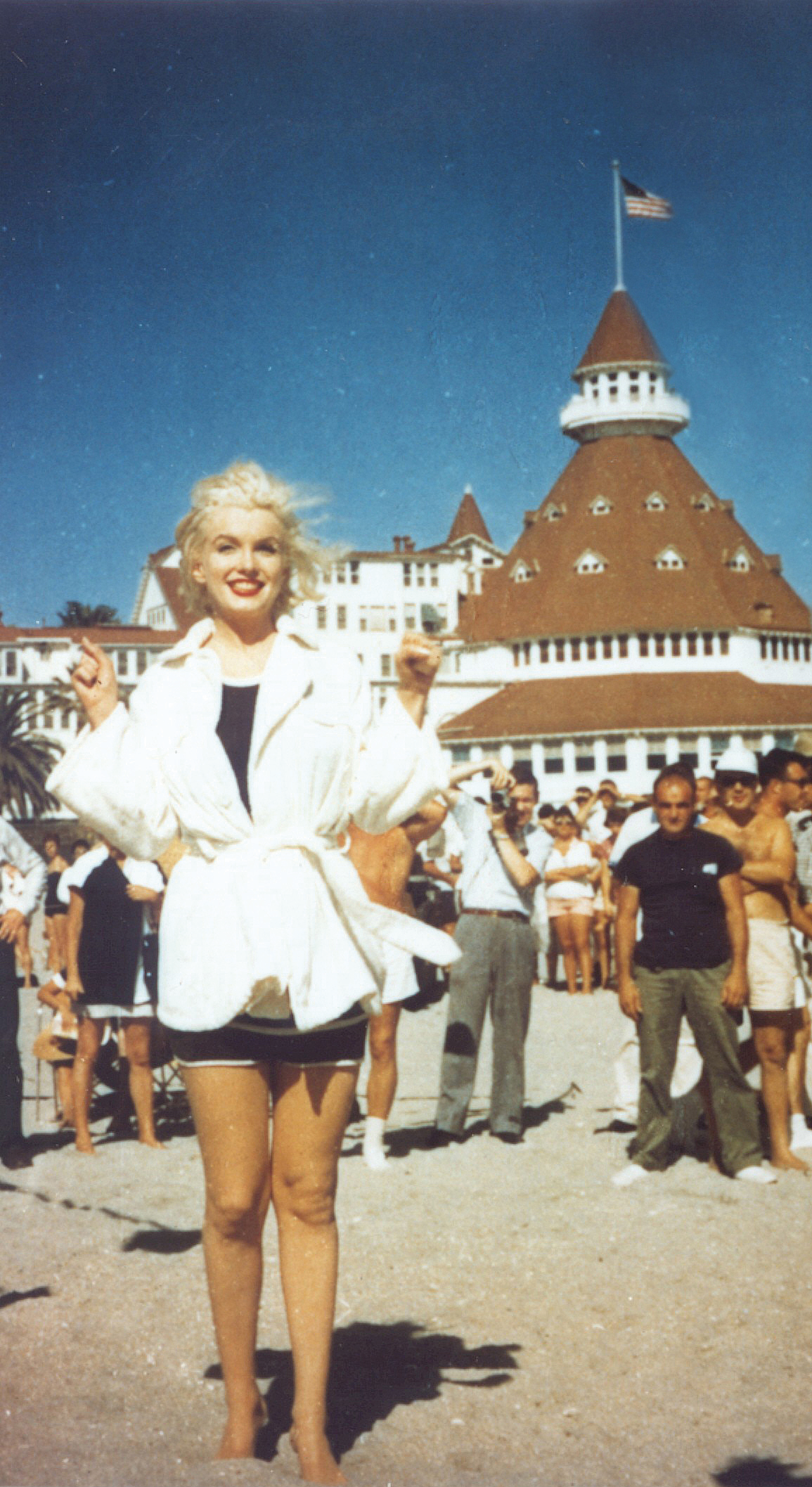 “Some Like It Hot,” one of Marilyn Monroe’s most famous movies, was filmed at the Del.