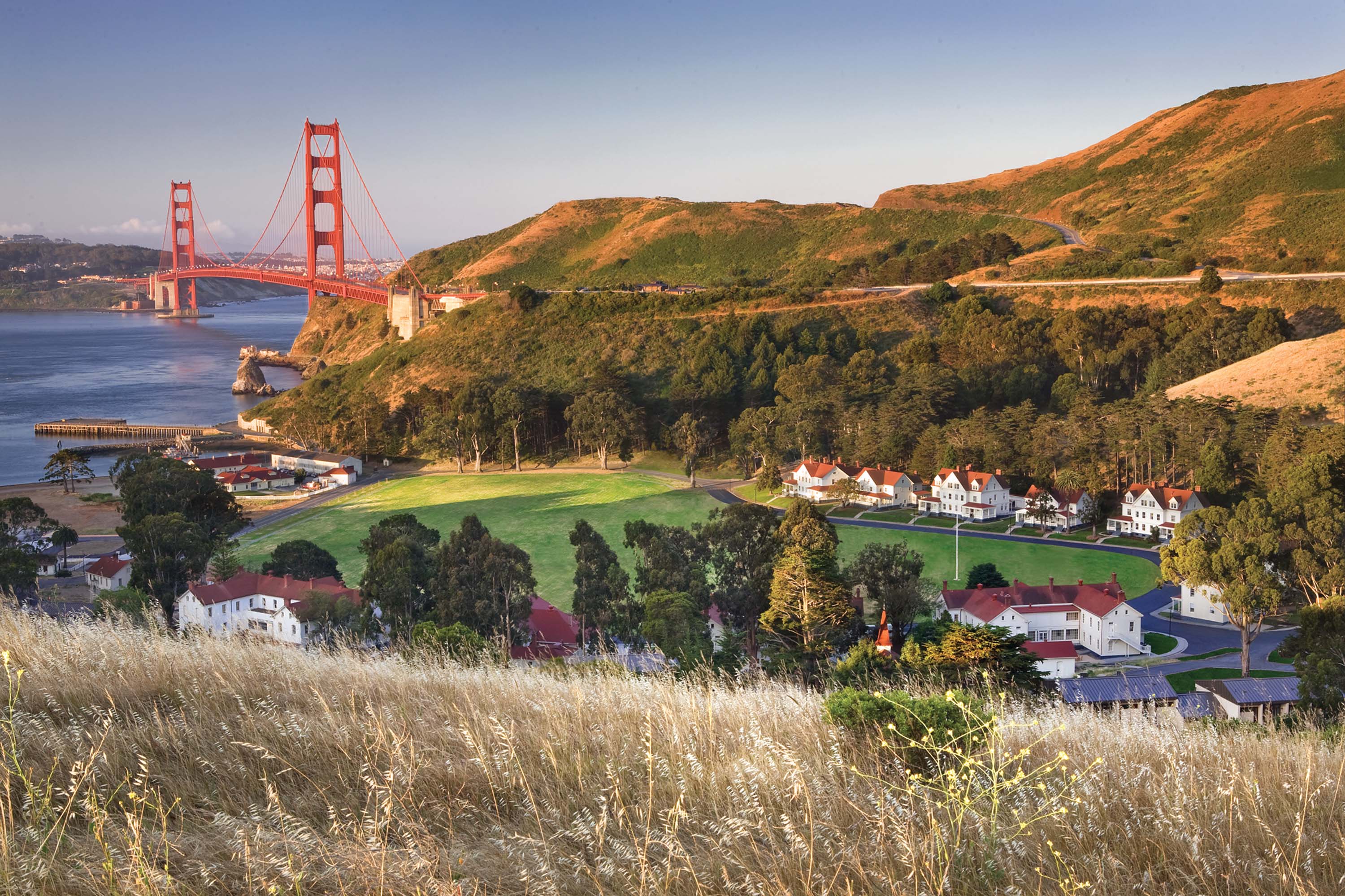 The Golden Gate Bridge, with its Art Deco articulation and International Orange color, is one of the world’s most iconic structures. For anyone who has crossed over or sailed under the famous landmark, though, almost equally iconic are the clusters of distinctive white houses set in the parklands flanking it. Well before the bridge was constructed in the 1930s, the Golden Gate itself was protected by the Presidio to the south and Fort Baker to the north. These geographically blessed sites, with their rolling hills, their open parade grounds, their scented eucalyptus trees and early 20th-century officers’ quarters, are one aspect of what makes the Bay Area so unique.

Marin County’s Fort Baker, which anchors the north side of the Bridge, was an active military base from 1866 through World War II. In 1973, the fort was listed on the National Register of Historic Places; in 2002 it was officially transferred from military oversight to the control of the National Park Service as part of the Golden Gate National Parks, one of the largest and most popular urban national park networks in the world. Occupying the original buildings and overlooking Fort Baker’s 10-acre parade ground is the Lodge at Cavallo Point, a small resort that combines a palpable sense of history with Zen-like serenity in a one-of-a-kind setting.

It is clear from the moment of arrival that Cavallo Point offers a unique experience. From the reception building, a former barracks, the view extends across the Bay to San Francisco, while the northern pier of the bridge thrusts up dramatically behind the closest wooded hills. The lodge’s historic rooms — repurposed from former officers’ housing and arrayed in a semi-circle — over-look the expansive parade ground. The contemporary rooms — new structures built on a hillside behind the reception and dining buildings — offer stunning dead-on views of the

Golden Gate Bridge, the city skyline and the Bay itself. Only a proven developer would have been granted the right to build a commercial venture in the heart of the historic and environmentally sensitive Fort Baker. Cavallo Point is owned by Passports Resorts, whose portfolio includes two other iconic, nature-immersed retreats: the Post Ranch Inn in Big Sur, and the Sea Ranch Lodge in Sonoma County. All three strive to be at one with nature; all three exhibit a profound sense of place.

From the outset Cavallo Point held itself to the highest possible standards, from construction methods and materials used to the selection of sustainably produced furnishings, locally sourced artwork, artisanal food and wine, and attentive service. The project won LEED Gold certification for its deliberate and thorough eco-consciousness, and acclaim for its sensitive historic preservation. The original pressed tin ceiling panels, for instance, were numbered then removed, scrubbed of lead-based paints, repainted and replaced; original radiators, with their grand ornate patterns, were also restored by hand and put back in use. Reception Golden areas feature wainscoting on the walls and narrow-gauge floorboards that speak to a bygone era, as do the ceiling fans in guest rooms. Both yoga classes and weddings are held in the relatively untouched original chapel. Art is also a big part of the Cavallo Point experience: Original works hang in every guest room and public space, and four times a year the art gallery mounts group shows thematically linked to Cavallo Point’s core values of nature, nurture, culture and adventure.

At Cavallo Point, its uniqueness is evident at all times, whether in the fog (horns lowing) or in the sun (bridge tower looming); whether the visitor is gazing across the Bay, with its sparkling water or glittering nighttime skyline; or taking in the rolling, undeveloped hills — with their promises of hiking trails, flora and fauna — that rise up behind the buildings.

Cavallo Point is imbued with a distinct sense of place. Every experience — from its stunning scenery and native landscaping, to its furnishings, artwork and cuisine — reinforces and strengthens that sense of place. Indeed, when dining in the Michelin-starred Murray’s Circle, sipping wine from nearby Napa Valley, dining on organic local produce, grass-fed Marin beef and Tomales Bay oysters, surrounded by black-and-white nature photography and gazing at the exhilarating view … there is only one place you could be. 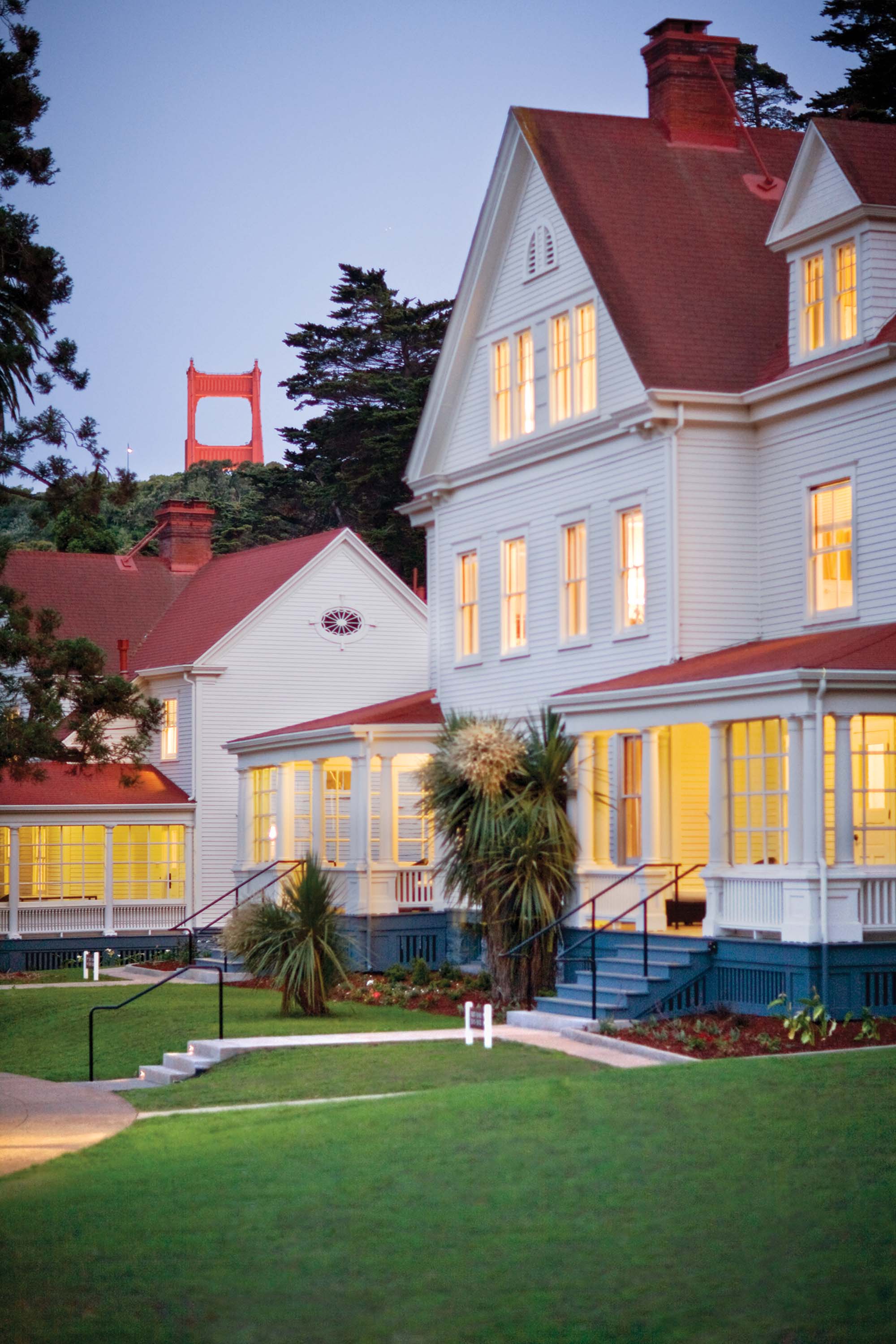 The Golden Gate bridge makes for a dramatic background behind the crisp white buildings and lush greenery. 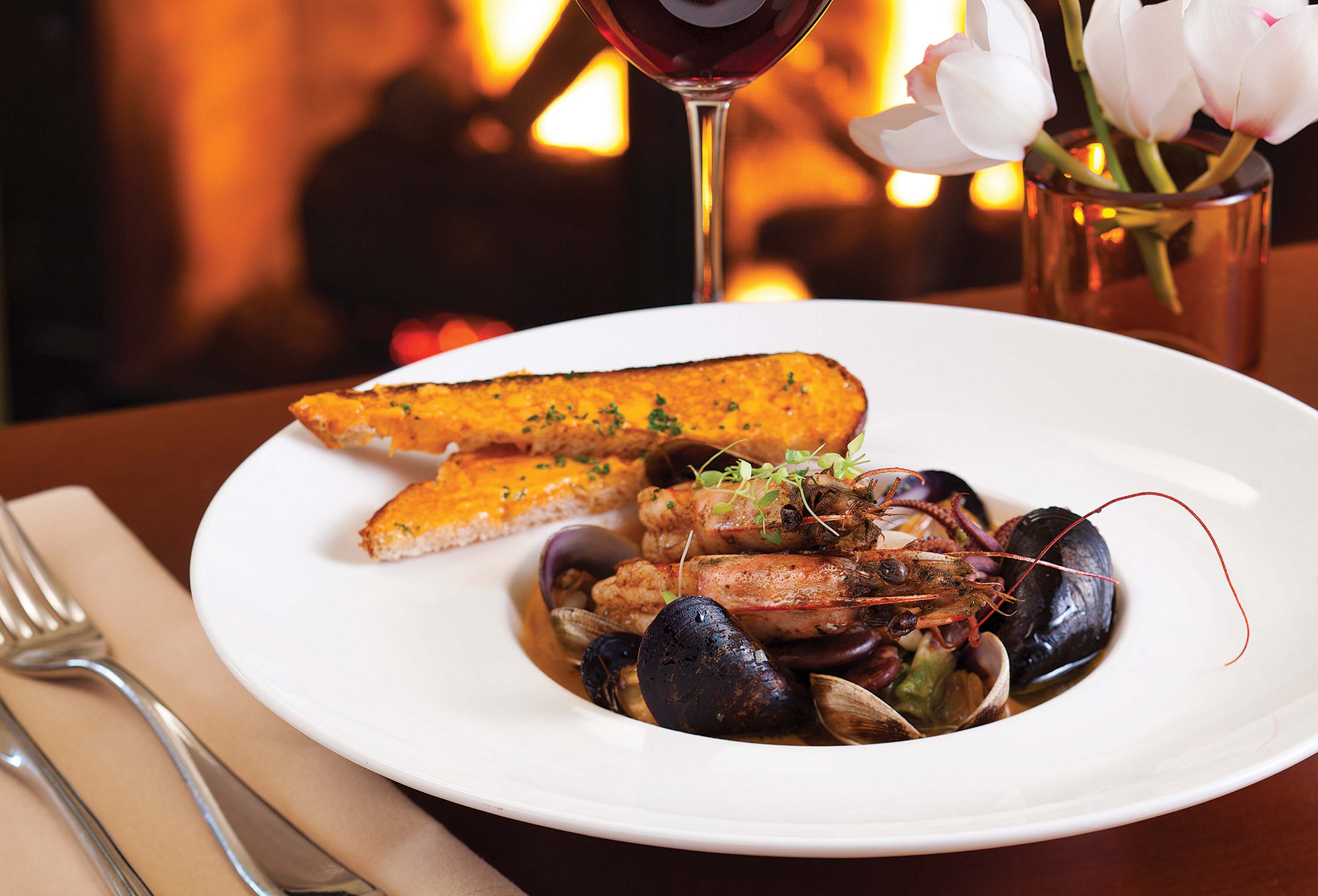 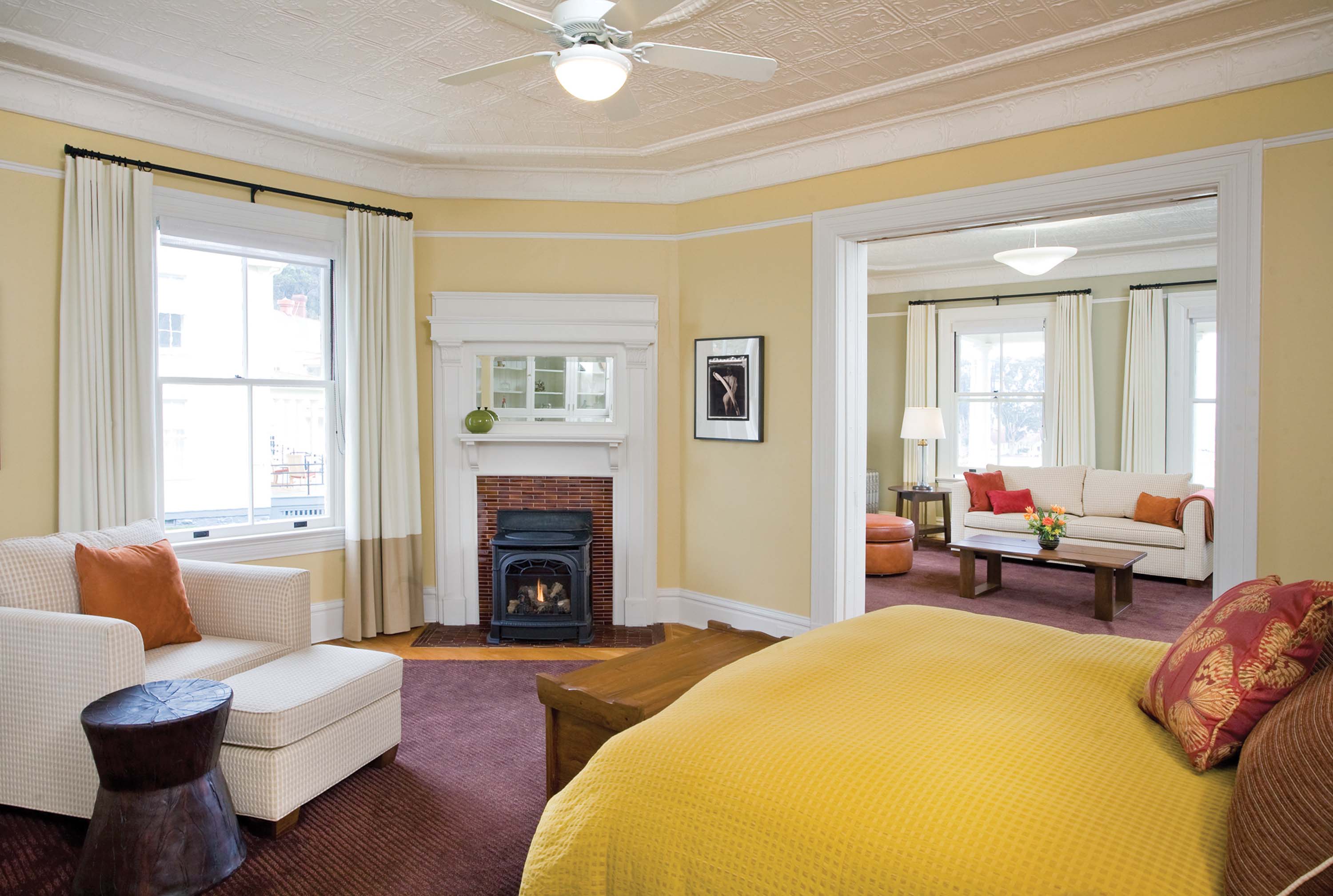 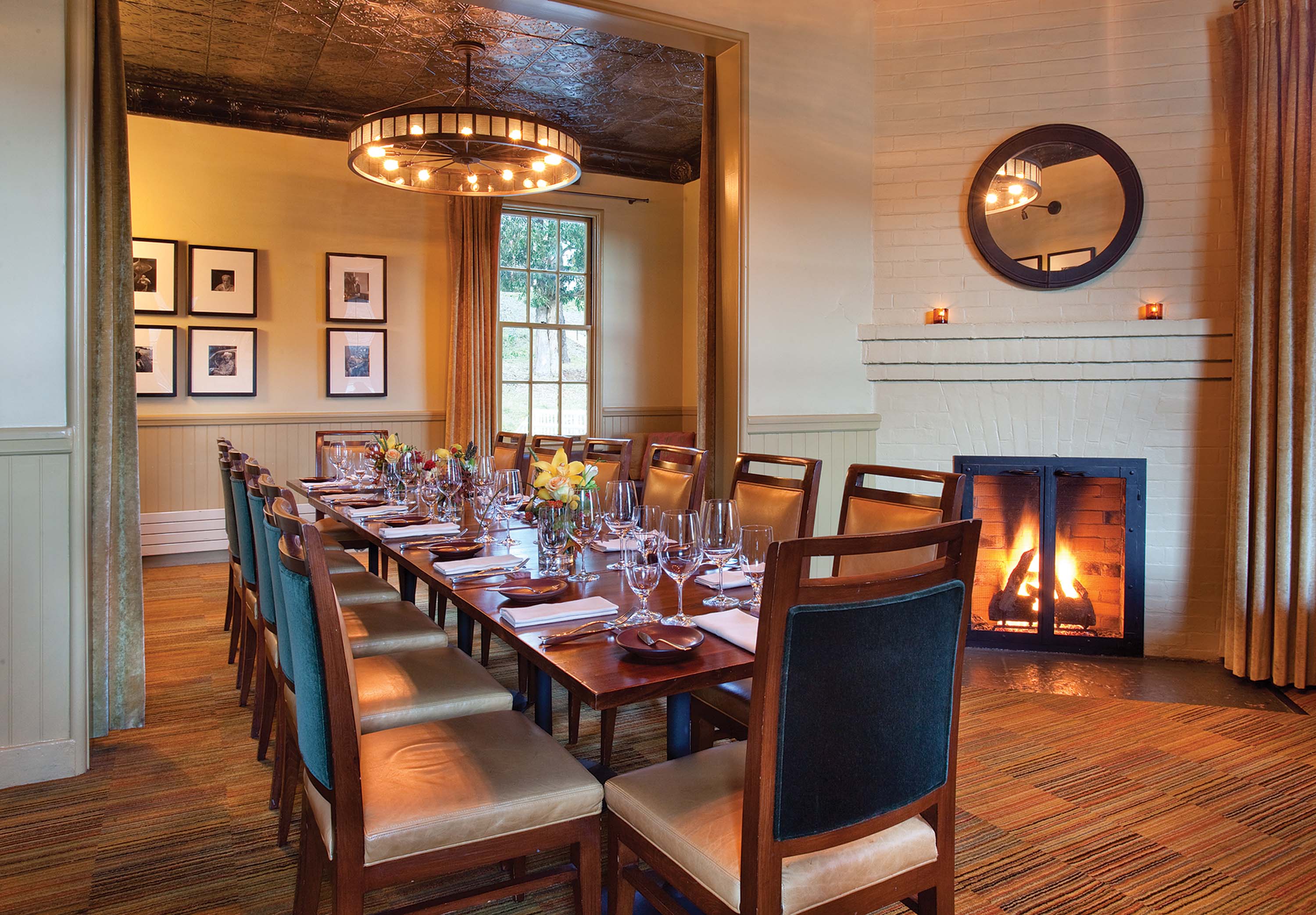 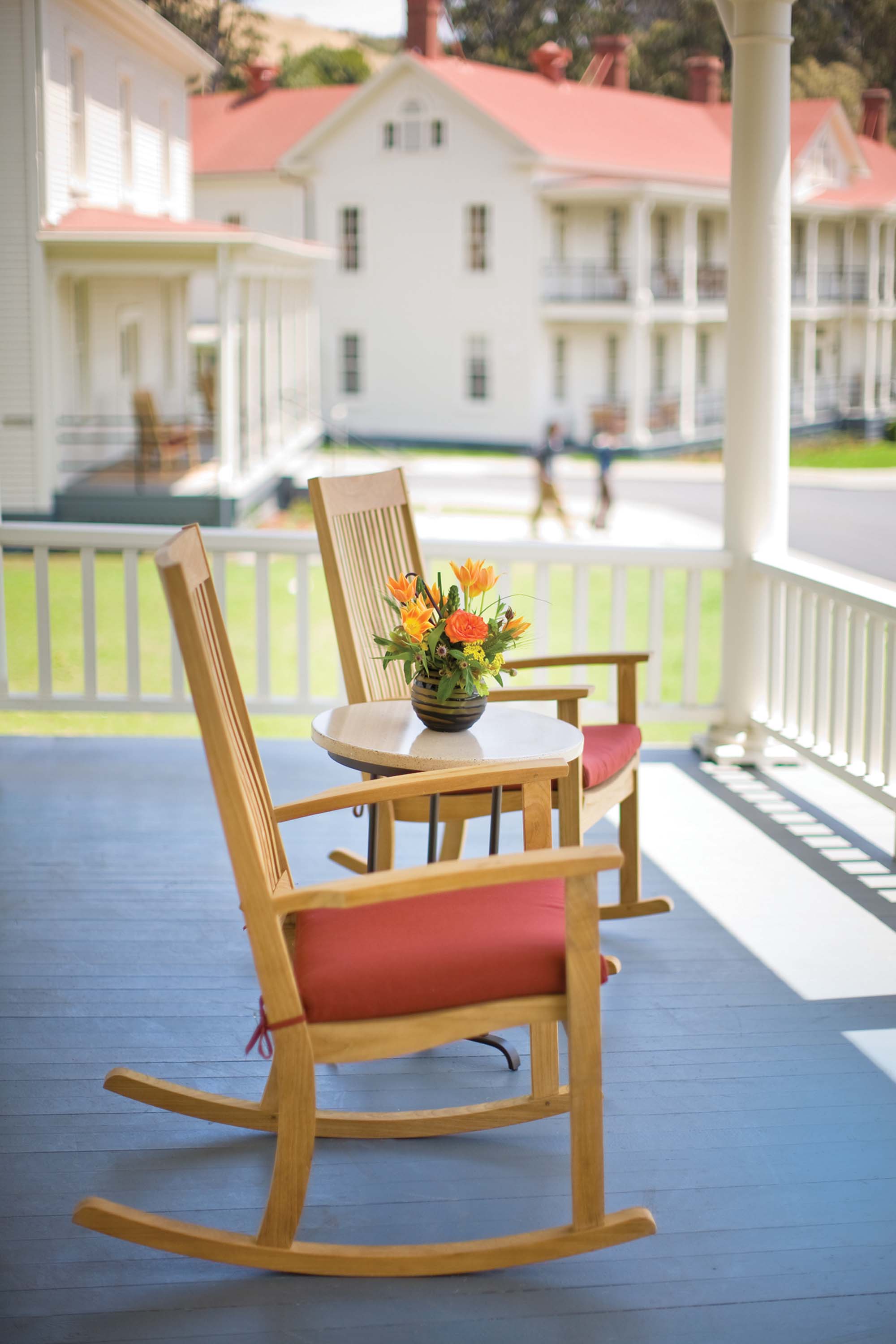 Former officers’ houses, arrayed around a broad expanse of parade ground, have been meticulously updated to retain their original charm.