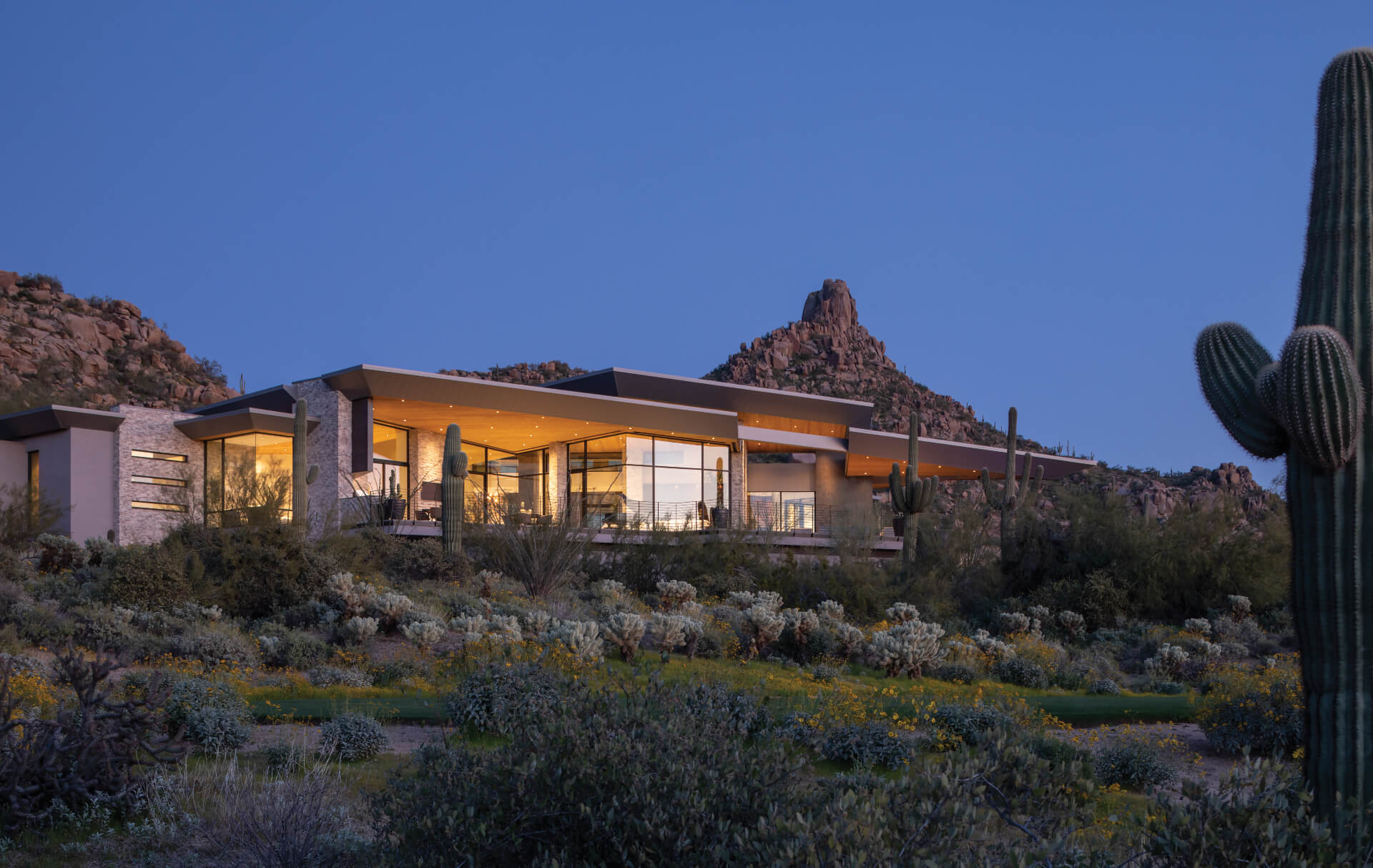 Scottsdale’s landmark Pinnacle Peak rises in the background of The Crusader, an angled glass and stone home designed in homage to the architect’s Marine Corps aviator father.

Glen Ernst wanted his last project to scare him. The Arizona-based home builder and operator of Peak Ventures knew he had a swan song on his hands.

Believing this to be his final major construction project, Ernst initiated the venture in 2017 after purchasing a lot in the Estancia Club, a private community and 18-hole golf course on the north slope of Pinnacle Peak in Scottsdale. The property runs alongside the eighth and ninth fairways and is situated on a peninsula with three sides exposed, offering tremendous views of the Sonoran Desert, Pinnacle Peak, and the city of Scottsdale. 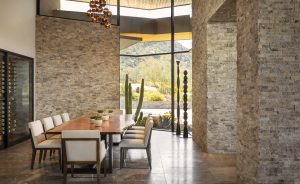 Ernst brought in architect C.P. Drewett and gave him free rein to create a home that was both exotic and difficult to build. Drewett created an immensely challenging home in homage to his own father, a naval aviator, mathematician, and woodworker who passed away in 2019. Named “The Crusader,” the design was inspired by Drewett’s father’s military service as a Marine Corps aviator and pilot of the F8 Crusader plane.

“Glen said he wanted a modern spec home,” describes Drewett. “I said, ‘How modern?’ And he said, ‘I want you to scare me.’ I was flying back from visiting my dad, and all that kind of coincided. I just started thinking about aircraft forms and how the wings of the crusader fold up, and they look even more radical. That’s where I really started diving into the core architectural precedent.” 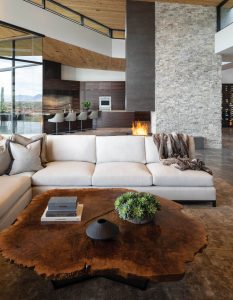 From above, the form is immediately recognizable, emulating an aircraft with its wings folded, which allows the angular home to tuck into its location in the Arizona desert. There are few right angles. Instead, the home’s design relies on dramatic, sharp turns. From the exterior, such aggressive geometry provides a sense of engagement, as if each corner is picking up speed. 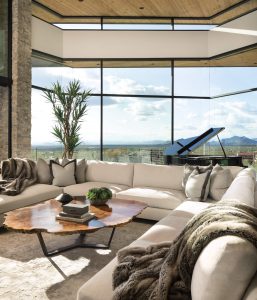 From the living room, the scenic panorama includes city lights and iconic Camelback Mountain in the distance.

“It’s so aggressive from certain viewpoints, but it provides tranquility from others,” says Drewett. “From an exterior point of view, it has a very aggressive nature, but from the interior, it’s very peaceful; it’s like a sanctuary of sorts.”

That tranquility is enhanced with scenic views from nearly every angle, and the home is nearly see-through with floor-to-ceiling windows that create a sense of weightlessness. The spine, lined with skylights, brings natural light in from all angles.

Drewett compares the structure to a plane in flight, especially when viewing the 42-foot cantilever overhangs that extend over the pool. “It’s not literally like a carrier deck, but it’s like that relationship,” says Drewett. 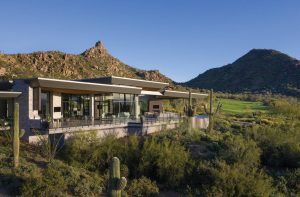 The lot, located in the Estancia Gold Club community, sits on a peninsula that’s highly exposed on three sides yet features tremendous views.

The home’s site was another source of inspiration and also a great challenge given its hyper exposure on a peninsula, says Drewett, who sought to tuck it into the landscape while also highlighting the immense views.

Though Drewett designs with a holistic approach, this project challenged him to dive deeper. “All those layers come together and lift upward,” he says, another nod to his father, but perhaps more of a spiritual metaphor. “The light gives life to the house.” 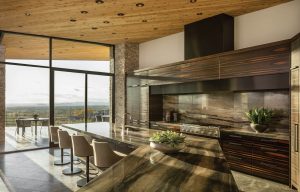 Sun streams across the kitchen’s Galapagos quartzite countertops and Macassar ebony cabinetry, highlighting the warm tones of the cedar ceiling. Material transitions are seamless from indoors to out, visually connecting the space when the glass doors are opened.

The National Association of Home Builders named The Crusader “Home of the Year” in 2020, and in June the project received a Golden Nugget Award for Best Custom Home, which honors architectural design and planning excellence and draws entries from around the globe. Drewett says such honors have made the project “that much sweeter.” 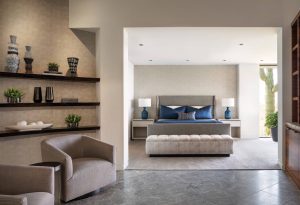 The Crusader’s roof opens up to the Sonoran Desert. The angularity of the house allowed the architect freedom to capture the views more effectively.

“It’s so fulfilling to have done something that meant so much to me, and for my peers and others to find that it had merit is very special,” he says.

Once it was finished, the Crusader sold for $7.5 million in March 2021. At the time, the home set a record for the highest price per square foot in Scottsdale, with just over 6,300 square feet of living space. 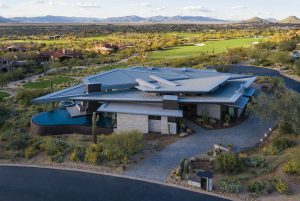 It was created as a spec home, which allowed the builder plenty of autonomy. “As a builder, to have creative control — and have clientele that will respond — is the most fun for me,” said Ernst. “Selecting the flooring, the cabinets, redesigning the floor plan, walking into the bedroom, adding skylights. I don’t want to have to ask someone; I like to have control.”

Ernst has been building houses for his entire career, primarily in the Los Angeles area, until relocating to Carefree, Arizona. The Crusader is one of a handful of homes he’s completed in Scottsdale’s Estancia Club. 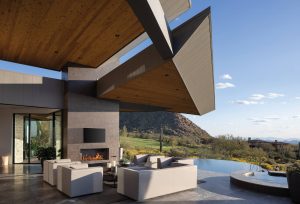 The overlapping rooflines of The Crusader provide aesthetic value and shelter from the hot desert sun.

“I am trying to create a work of art. There are so many thousands of details in a home that people don’t really think about. In each one of them, we are looking for what is perfect, what is the cleanest detail,” he says.

At age 72, Ernst says he was confident The Crusader would sell, but more than that, he was confident it would push his limitations as a builder. “I wanted to make it special,” he says. “I’m getting up there; I am not going to live forever.”

Ownby Design was brought in to complete the home’s palette and furnishings. Claire Ownby, owner of the interior design firm, frequently works alongside Drewett and has furnished several homes in Estancia. “Our design aesthetic is so similar,” Ownby says.

Ownby explains that the owners were purchasing The Crusader as a second home and live primarily in Hawaii. “They have a strong desire for texture, dimension but also calmness. We really tried to layer all our choices around those preferences,” she says. 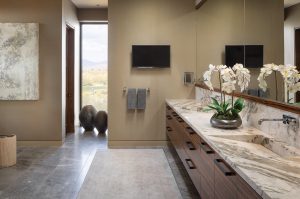 A Zen-like guest suite offers soothing tones and the abundance of nature outside its windows.

The project was of such a personal nature to the architect, and Ownby wanted to ensure that she honored the striking architecture of the home. “We helped the homeowner finish the project to their preferences, but also honoring what C.P. had designed. We wanted to make sure all those choices were harmonious and complementary to the architectural features,” she says.

The majority of the mingling spaces in the home are neutral, letting the exterior views take center stage. The home is a contrast of Douglas fir ceilings and cabinets featuring exotic woods, including Macassar ebony from Africa and pau ferro rosewood from South America. It’s accented with smooth and cool marble surfaces, rugged split-face travertine stone, and rusty-colored porcelain that contrasts with the metallic structure and framing. Outside architectural details are brought inside to the walls and fireplace, creating a holistic flow. 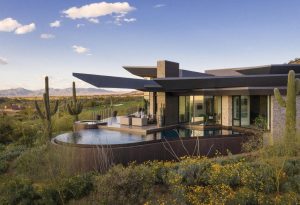 The angled roofline of the home hovers over a negative-edge pool, which surrounds the guest suite and office.

“That really brought the house to life,” says Ernst. “That great room is extremely dramatic. Everyone kind of stops and drops their jaw when they walk in.”

“Every detail meant so much to Glen,” Drewett says. “I’ve never really known another builder like him who would take it to this level and not look at me like I was completely insane. When I first presented this crazy triangulated piece of architecture that had no ounce of normalcy to it, he didn’t bat an eye. He has a ton of courage.”

Though Ernst had intentions to retire after the Crusader’s completion, he’s building “one more house.”

“I always threaten that this will be my last house,” he says, “but sometimes it doesn’t work out that way.”