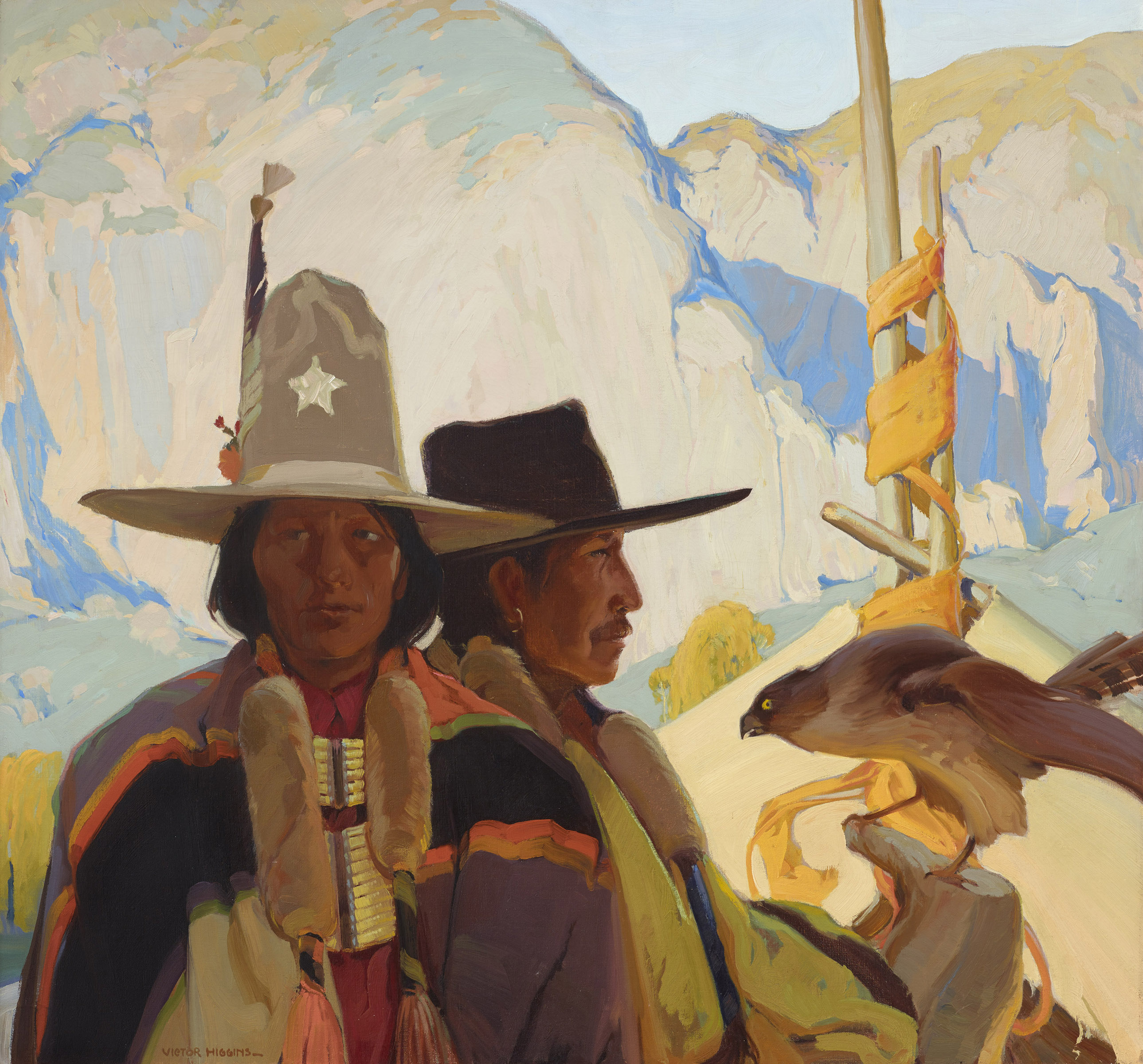 The Chrysler Museum of Art in Norfolk, Virginia explores how the American West became the iconic Wild West of legend and lore in its fall exhibition, “Branding the American West,” opening Oct. 28. and running through Feb. 5, 2017.

Discover a bonanza of Western paintings, films and sculptures in the Chrysler Museum of Art’s fall keynote exhibition. Branding the American West: Paintings and Films, 1900–1950 features classic images of cowboys, Native Americans, mountains, and deserts. Though many of the works closely correspond to most Americans’ ideas of the “Wild West,” the show also includes artworks that challenge those popular views. The exhibition, organized by the Brigham Young University Museum of Art and the Stark Museum of Art, will be on view to the public from Saturday, October 29, 2016 through Sunday, February 5, 2017 in the Museum’s Norfolk Southern Special Exhibitions Gallery. Admission is free.

Headlining this stampede of more than 100 works of art are iconic images by Frederic Remington, Charles Marion Russell, and N. C. Wyeth. These master illustrators created a visual “brand” for the frontier as a land filled with adventure and rugged individualism. Turn-of-the-century city dwellers adored nostalgic fantasies of the Wild West, but as this show reveals, some artists challenged these stereotypes and acknowledged the taming and modernizing of the region.

“At the crux of this show is the creation of a myth—the myth of the American West,” says Museum Director Erik Neil. “This exhibition addresses the role that myth has played in forming our American identity.” Since the Chrysler Collection has very few works of Western art within its sweeping American art galleries, “an exhibition of this scope and scale brings something new to our audiences. It transports visitors across the country—and back in time—to a place of mystery, beauty, and sometimes danger and contradictions.”

Paintings and novels about the Wild West fueled tourism and immigration to the region, particularly Utah, Arizona, and New Mexico. Branding the American West explores this moment of change, considering how the arrival of railroads, automobiles, and industry shifted the character of Western art. 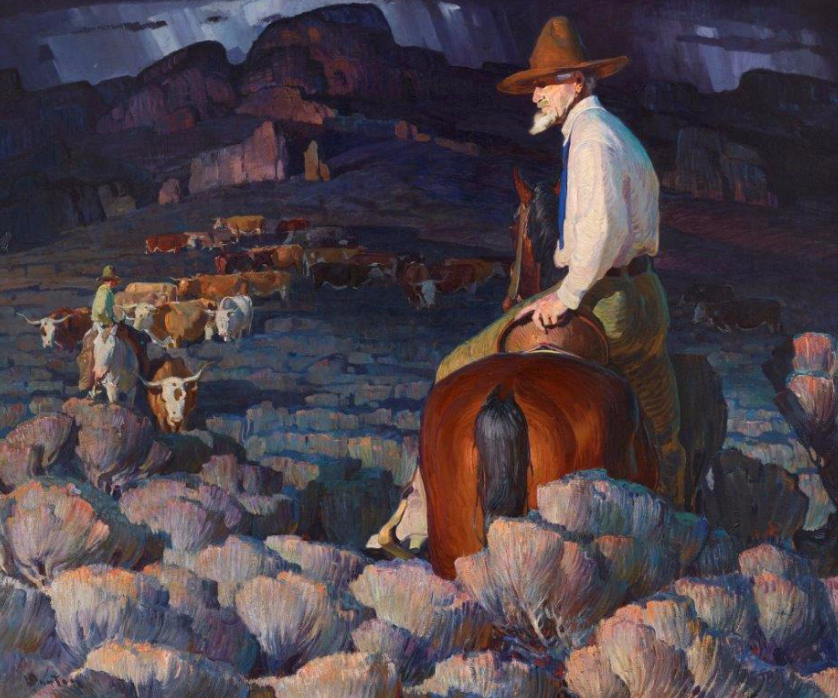 Painters discovered the bright sunlight and rich colors of the Southwest and responded with experimental and abstract styles of artmaking, as seen in Maynard Dixon’s Mesas in Shadow (1926) and other sweeping vistas. The show features more than a dozen powerful landscapes by Dixon, who described his work as capturing the West’s “sense of sun and space and silence—of serenity—of strength and freedom.”

“By 1900 the days of cowboys fighting Indians were over,” explains Brock Curator of American Art Alex Mann, who organized the Chrysler’s presentation of this show. “Some artists painted historical and fictional scenes, building a mythology that lives on today. Others chose to observe their immediate surroundings and record the modern West,” he says. “It’s exciting to tour these galleries, see two distinct brands of Western art in competition, and choose your favorite.”

Some of the finest paintings in this exhibition were created in Taos, N.M., a Pueblo village that developed a vibrant colony of artists beginning in the 1910s. These artists’ appreciation for both the landscape and cultural history of the West is evident in works like Joseph Henry Sharp’s Council Call of Crows, Montana (ca. 1908), a magnificent sunset view of an Indian camp. Other works by the Taos painters celebrate the extraordinary craftsmanship and design of Native pottery, baskets, and textiles. 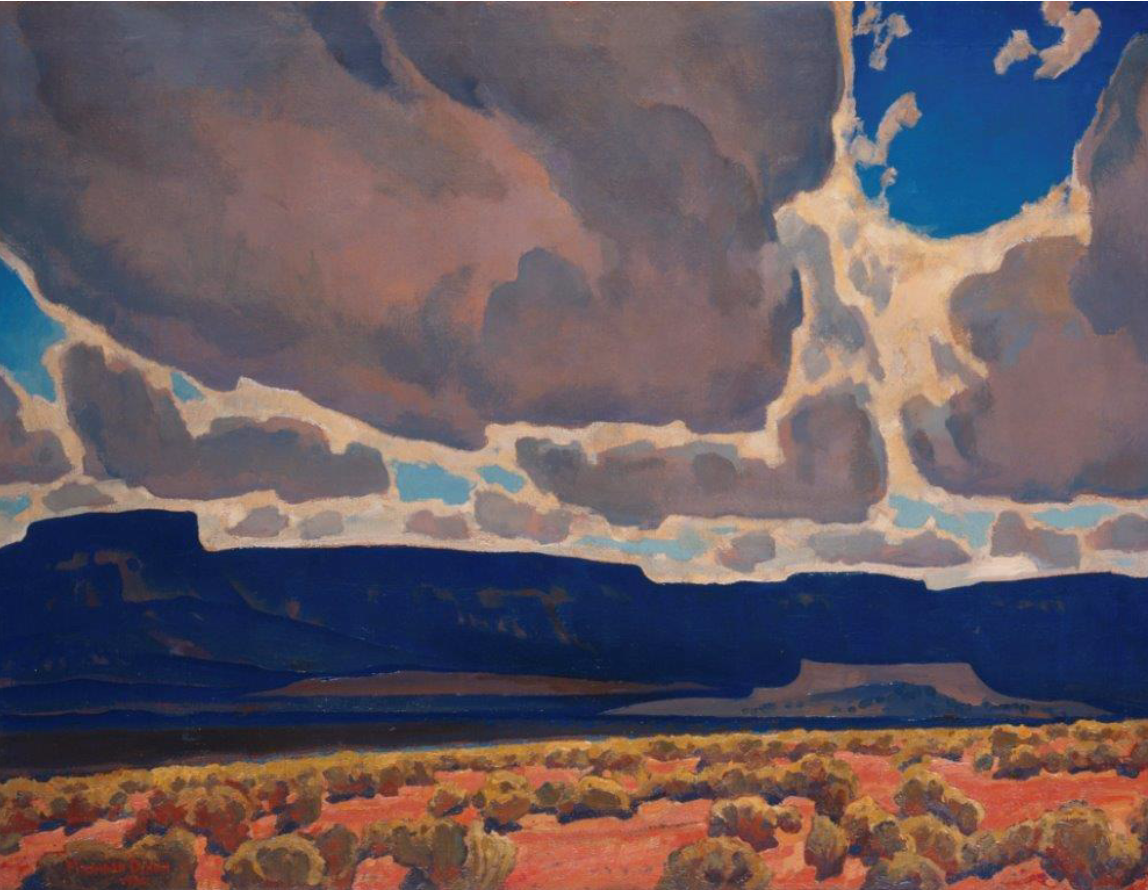 “Perceptions about Native Americans were changing,” says Mann. “Many of these paintings show sympathy for the political disenfranchisement of the Native Americans and respect for artistic traditions of the Pueblo, Navajo, and other tribes,” says Mann. The Chrysler Museum has drawn from its own collection to supplement the exhibition with selected ceramics and glass depicting Indians. Upstairs in the Museum’s Gallery 212, the Museum’s 19th-century American landscape paintings and sculptures have been augmented with a special loan from the Fenimore Art Museum in Cooperstown, N.Y. Thomas Cole’s early masterpiece Landscape Scene from “The Last of the Mohicans” (1827) provides a longer historical perspective on visual ideals of the frontier.

Perhaps the most innovative feature of Branding the American West is its comparison of fine art with film, breaking new scholarly ground by recognizing the importance of the American West to the early history of Hollywood. Throughout the galleries video monitors will juxtapose clips from classic movies by John Ford and Cecil B. DeMille with the works of Remington, Dixon, and their colleagues. These pairings show how filmmakers translated competing “brands” of the frontier from canvas to the big screen. A series of Western-themed programs, talks, films, and family activities complement the exhibition throughout its run.

“The Chrysler is proud to be the only East Coast venue for such a groundbreaking scholarly exhibition,” says Erik Neil. “With its creative mix of art and cinema, it balances familiar faces with surprising stories in an accessible, thought-provoking way.”

The show debuts exclusively for Chrysler Museum Members with a Preview Party on the evening of Friday, October 28, 2016. The show opens to the public on Saturday, October 29, 2016 and is on view through Sunday, February 5, 2017. Admission is free.

Branding the American West: Paintings and Films, 1900–1950 is organized by the Brigham Young University Museum of Art, Provo, Utah, and the Stark Museum of Art, Orange, Texas, and is made possible in part by the generosity of the Charles Redd Center for Western Studies and the Nelda C. and H. J. Lutcher Stark Foundation.

The exhibition’s presentation at the Chrysler Museum is made possible by the Joan and Macon Brock Endowment for American Art.

Discover how early films helped brand the American West and why Howard Hawks’ 1948 Red River may well be the perfect cinematic Western. Gary Needham, Senior Lecturer at Nottingham Trent University and Associate Editor of Fashion, Film & Consumption, explores the popular genre that started with The Great Train Robbery, as well as the similarities and tensions between American history and film interpretations. Stay for a 2:30 p.m. screening of Red River, starring John Wayne and Montgomery Clift. This special program is presented in partnership with Gay Cultural Studies and the College of Arts & Letters at Old Dominion University.  Admission is free, but seating is limited.

Mosey on over to the Museum for a rodeo of family fun. Our Fall Family Day features Western-themed performances, live animals, and creative hands-on artmaking. A highlight of the afternoon is a performance by Red Crooked Sky American Indian Dance Troupe. And be sure to rope yourself a copy of our Family Guide before you tour Branding the American West. Admission is free.

Third Thursday at the Museum

Wear your favorite boots tonight as the Museum wrangles up a Western-inspired evening in honor of our fall keynote show. Come at 5:30 p.m. to enjoy free line dancing lessons, then stay for live music by Country Rebels. At 6:30, take a guided tour of the exhibition, and at 7 p.m., take in a Kaufman Theater screening of several of the silent films from Branding the American West. And, of course, tonight’s cash saloon features all-American beer.

Admission is free for Museum Members and students with current ID, $5 for all others. Third Thursday is generously sponsored by The Capital Group Companies and Virginia Natural Gas/AGL Resources.

Film: The Last of the Mohicans (Rated R)

Daniel-Day Lewis stars as Hawkeye in this 1992 cinematic version of James Fenimore Cooper’s epic novel set in 1757. During the French and Indian War, British troops, colonial trappers, French soldiers, and Native tribes battle for control of the North American frontier and their own destinies in a classic tale of conflict, romance, and identity. Admission is free.

ABOUT THE CHRYSLER MUSEUM OF ART

The Chrysler Museum of Art is one of America’s most distinguished mid-sized art museums, with a nationally recognized collection of more than 30,000 objects, including one of the great glass collections in America. The core of the Chrysler’s collection comes from Walter P. Chrysler, Jr., an avid art collector who donated thousands of objects from his private collection to the Museum. In the years since Chrysler’s death in 1988, the Museum has dramatically enhanced its collection and extended its ties with the Norfolk community. The Museum, expanded in 2014 to add additional gallery spaces and amenities for visitors, now has growing collections in many areas. The Chrysler also mounts an ambitious schedule of visiting exhibitions and educational programs and events each season.

In 2011, the Chrysler opened a full-service glass Studio adjacent to the Museum. This state-of-the-art facility features a 560-pound capacity glass furnace, a full hot shop, a flameworking studio, nine annealing ovens, and a coldworking shop. In addition, the Chrysler Museum of Art administers two historic houses in downtown Norfolk: the Moses Myers House and the Willoughby-Baylor House.

The Chrysler Museum of Art, One Memorial Place, Norfolk, and its Perry Glass Studio at 745 Duke St., are open to the public Tuesdays through Saturdays from 10 a.m. to 5 p.m. and Sundays from noon to 5 p.m.

The Historic Houses on East Freemason Street are open weekends. General admission is free at all venues. For more information on the Chrysler Museum of Art, visit chrysler.org.