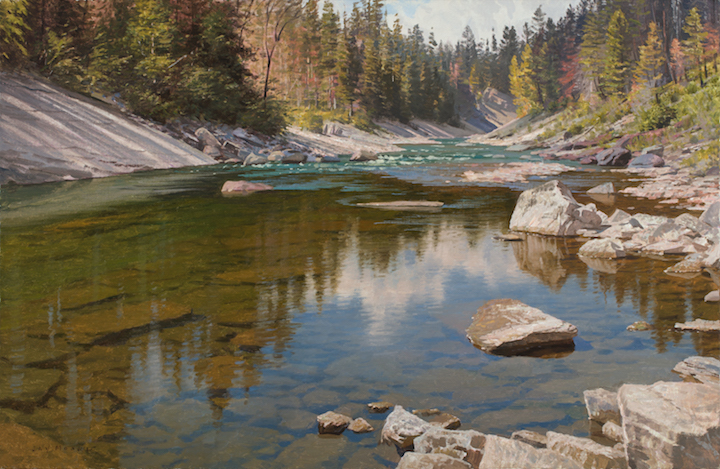 Trailside Galleries, in Scottsdale, Arizona, is pleased to present “A Life Outdoors” a one-man show of all new works by Colorado landscape painter Jay Moore. An Open House and artist reception will be held at the gallery on Thursday evening April 6 from 7 to pm., and the artist is scheduled to be in attendance.

Jay Moore grew up in Evergreen, Colorado, spending nearly every waking moment outdoors: fishing, camping, swimming, and absorbing the subtleties of nature that every good sportsman and artist needs. This bond with nature formed early and became deeply rooted. He graduated at the top of his class from the Colorado Institute of Art and worked in graphic design and illustration for several years. It was a plein air painting workshop with the master landscape painter Clyde Aspevig that convinced him to concentrate full-time on painting.

Moore is a modern-day naturalist, more at home amongst the elements, observing the natural world. The artist’s years spent exploring the Colorado highlands has given him a keen eye for the subtleties of the great outdoors. He can look at a patch of snow on the ground and tell you what month it is. He can even tell, often to the minute, when rain will fall by looking at the cloud patterns in the sky.

Moore's artistic focus is portraying the grandeur of the American West. His canvas size is a testament to the vastness of the outdoors, sometimes measuring as wide as 10 feet in width. “As an artist, a painting is like a conversation: I hear what the terrain says to me and respond on canvas,” says Moore. Reflecting on this newest collection of paintings, Moore notes, I am very excited about the upcoming show because it will include paintings from my usual haunts in Colorado as well as explorations in the past year to Glacier National Park, the California Coast, and Hawaii. I am broadening out and finding whole new subject matter that is very inspiring. I have been easel painting for over 20 years, but am as excited as ever.”

Jay Moore is a regular exhibitor at major museum shows including Quest for the West at the Eiteljorg Museum and Masters of the American West at the Autry National Center. His work is in the collections of the Denver Art Museum and the Pioneer Museum in Colorado Springs as well as many corporate and private collections. In 2015 he was the recipient of the Eiteljorg Museum’s Victor Higgins Award of Distinction for the Best Overall Body of Work.

Since 1963, Trailside Galleries of Jackson, Wyoming and Scottsdale, Arizona has been regarded as one of the pre-eminent dealers in American representational art, specializing in a rich and varied collection of works by the leading western, wildlife, figurative, impressionist, and landscape artists in the country. The artist roster includes members of the Cowboy Artists of America, National Academy of Design, Oil Painters of America, Plein-Air Painters of America, Prix De West, Society of Animal Artists, National Sculpture Society and Masters of the American West.