Stained Glass. His work includes everything from religious subjects and text to wolves, trout, wheat and mountains. His stained glass can create the illusion of 3D depth or a textured appearance, and he is equally adept at modern or contemporary styles.

A sixth generation Coloradan, Duke Beardsley has been drawing and painting the American west for as long as he can remember. Raised both in Denver, and on a 1000 acre cattle ranch in eastern Colorado, Duke's "duel" upbringing is the foundation for his unique blend of traditional western iconography and contemporary art sensibilities.  An unapologetic fan of all "things cowboy" Duke spends much time on horseback, joining his many friends and family on some of the West's greatest ranches. Duke rides with crews to participate, observe and document todays working cowboys and cowgirls in their element.  Formally trained at The Art Center College of Design in Pasadena, Duke now lives and works with his wife and two daughters in Denver.

Eric Dever (born, Los Angeles, 1962) moved to New York in 1986 to study painting and critical theory at NYU/Steinhardt (MA’88-studio art). His work since the early 1990’s has been exhibited throughout the United States and internationally. Dever is represented by Berry Campbell Gallery, New York.

For more than a decade, Dever employed a square canvas and limited palette, white for four years, then white and black for two years, and since then white, black, and red. Uncovering a staggering amount of variety, both in hue and composition, it was an exercise most notable when the works were placed together, each painting holding its own. 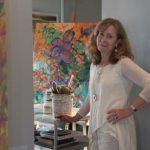 LeeAnn Brook is a Nevada City, California-based artist whose works explore the landscape through color and movement. Using an expressive layering of colors, unique textures, and an awareness of light, Brook’s large format contemporary landscape paintings are inspired by environments of water, grasslands, gardens and forests. 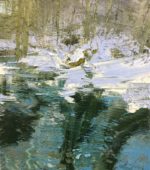 With masterful use of line, palette and texture Lynn Boggess carries the viewer into his richly verdant and luscious landscapes, where these works were conceived.

Lynn Boggess’ subjects reflect the diverse nature of West Virginia and its flora. Boggess draws the viewer into the deeply receding spaces of his images. The pictures, devoid of human or animal habitation, focus on Nature, free of the influence of human activity. Boggess compels the viewer to contemplate each scene in turn, and finally the cycle of scenes: the lapse of hours; the alternating character of the rocks, of the trees and of the land; the turn of season. The paintings themselves become the spaces they portray.

Marie Figge Wise was born in Davenport, Iowa and now splits her time between Texas and Colorado. From a young age, art has been a tremendous influence on Figge Wise’s life, cultivated at first from her studies at The Art students League of New York, then in Italy where she studied the studio arts and art history, and later by her family’s connection with Davenport’s Figge Art Museum. Marie has studied with Joe Anna Arnett, Sherrie McGraw, Gregg Kreutz, Nancy Bush, and Michael Workman.

As a result of working for over 30 years in the art of bronze patination, Patrick Kipper has one of the largest patina palettes nationally and internationally.

About 10 years ago, Patrick had to reduce his clientele from over 200 to just over 20 of his best clients. As a result, Patrick no longer takes on new full time clients on small works. From time to time, however, he does take on projects involving small
pieces of great value or importance and readily takes on life size and monumental bronze projects that may be a one time deal or have only a few within the cast edition. (Please contact Patrick if you are requesting his services for one of the above projects mentioned).

Scott Hardy, a fifth generation stockman, understands the dedication required to excel. Though largely self-taught, Hardy acknowledges the influence of modern masters Al Pecetti and Mark Drain. In his 31st year as a full-time silversmith and engraver, Hardy was commissioned by the Calgary Stampede to create 100 hand-engraved, silver and gold buckles commemorating the Stampede’s 2012 Centennial. Canada Post issued a stamp featuring Hardy’s buckle to celebrate the Stampede’s centennial making Hardy the first silversmith with work featured on a Canadian stamp. A full-time silversmith and engraver since 1981, Scott has been honored by the Academy of Western Artists, receiving the 2001 Will Rogers Award as Engraver of the Year. In 1994 his was judged Best of Show at the Cowboy Poetry Gathering in Elko, Nevada.

Àlvar Suñol Munoz-Ramos, also known as Alvar, is a Spanish painter, sculptor and lithographer. He is one of the few remaining living Modernist artists.

T. Allen Lawson is drawn to the quieter side of life. Over time he has developed a discipline of patiently observing and studying the often unnoticed rhythms and subtleties of his surroundings. In his paintings he strives to build layers and textures with pigment to create the abstraction and nuanced depth he feels in nature and the world around him.