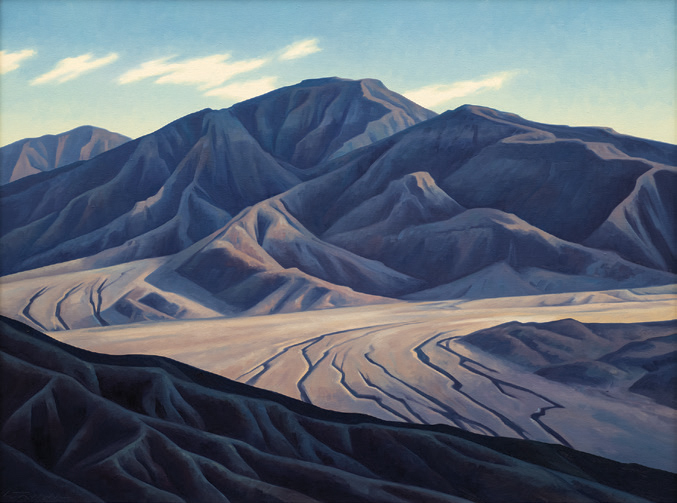 The exploration of the Western frontier lasted only a few hundred years, but it dramatically shaped our national identity. As historian David Hamilton Murdoch writes in The American West: The Invention of a Myth, “No other nation has taken a time and place from its past and produced a construct of the imagination equal to America’s creation of the West.”

To address this wealth of Western romanticism, a group of academics called the New Western Historians formed in the 1980s, seeking to study the American frontier’s past by examining race, class, gender, and the environment. In other words, they sought a more inclusive version of Western history, one that shook up the myths residing in our imaginations.

Similarly, a new genre of Western art has been emerging, reflecting many of the same values of inclusivity. New Western Art acknowledges the impact of Modern and Post-Modern art on today’s Western artists, and gives credit to Native American artists for their major contributions to the movement.

Seth Hopkins, executive director of the Booth Western Art Museum and guest-curator for an exhibition of New Western Art at Colorado’s Steamboat Art Museum, credits the Institute of American Indian Arts (IAIA) in Santa Fe, New Mexico, as the origin for the genre. “In my opinion, the work of contemporary stalwarts like Ed Mell, Donna Howell-Sickles, Kim Wiggins, Howard Post, Billy Schenck, and many others would not have been accepted as readily without the groundwork of Native artists,” writes Hopkins in the exhibition catalog.

He adds that Native American artists are “woefully uncredited” for these contributions, but unfortunately, “that’s nothing new for Indigenous art,” which for decades was considered craft and displayed in natural history museums instead of its rightful place in fine art institutions. Hopkins also notes that the abstract designs by talented early Native American artisans directly influenced pivotal artists of the 20th century who created the concept of Modern Art, including Pablo Picasso, Georges Braque, and Henry Moore, among many others.

New York City’s Museum of Modern Art (MoMA) provides a clear example of this influence. During Indian Art of the United States, a 1941 exhibit featuring approximately a thousand objects from Native American cultures, Navajo artists created meticulous, ephemeral sand paintings on gallery floors during live sessions, allowing visitors to observe their process. One such visitor was artist Jackson Pollock, who “was so enthralled by what he saw that he later cited this encounter as one of the major influences on his gestural style of painting, in which his canvases were laid directly on the floor,” according to MoMA. “In this manner, Native American artists working in traditions hundreds of years old [had] a profound impact on a generation of American artists forging radical new paths in artistic expression.”

The concept of New Western Art is a recurring theme throughout this issue. The genre is explored further in “Reflections of the New West,” which profiles the Steamboat Art Museum’s exhibition, pg. 126. And New Western artworks are found throughout these pages; consider painter Mark Maggiori, pg. 94, many of the top-selling artists in “Auction Block,” pg. 38, and bead artist Ken Williams Jr., pg. 50, to start.

While the important founders of Western art, such as George Catlin, Karl Bodmer, Albert Bierstadt, Frederic Remington, Charles Russell, and Thomas Moran, laid an invaluable framework that gave Western art its footing in American art history, New Western Art broadens our understanding of this ever-evolving and complex region. We hope you enjoy the various styles of artwork inside this issue, from “cowboy to contemporary,” each one a vision of our beloved West.