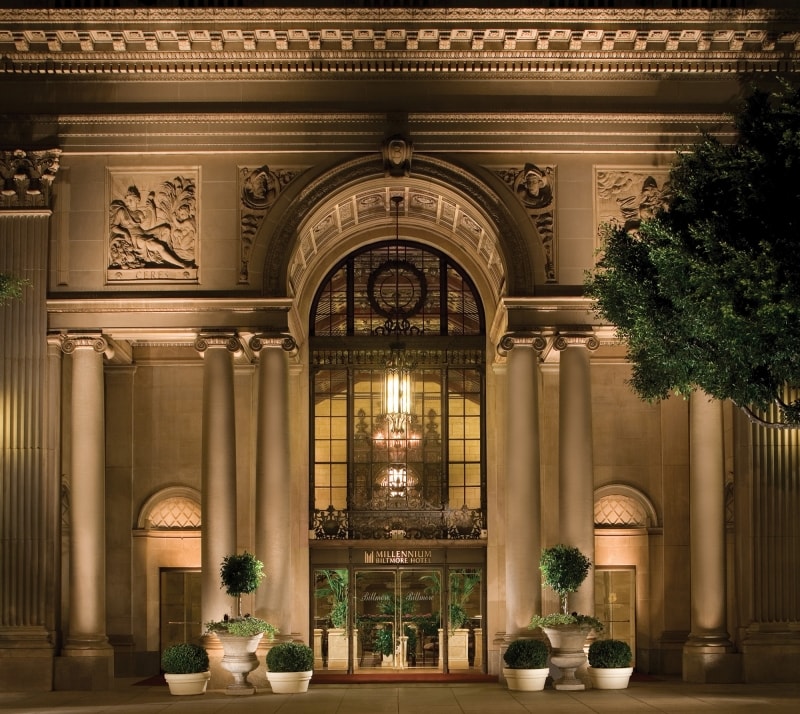 On Olive Street, the arched entrance to the Millennium Biltmore is reminiscent of ancient Rome, albeit with carvings of the explorers Vasco Núñez de Balboa and Christopher Columbus.

The iconic Millennium Biltmore Hotel, an architectural treasure in downtown Los Angeles, California, is located amidst the city’s outstanding cultural and culinary venues, its major financial, convention and sports sites, and a myriad of noteworthy historic structures. Heralded as the “Host of the Coast,” the hotel’s design incorporates elements from Beaux-Arts and Spanish-Italian Renaissance Revival architectural styles, a nod to the city’s heritage.

When the Millennium Biltmore made its debut in 1923, the 11-story, steel-and-concrete-framed structure was the largest hotel west of Chicago, Illinois. During the inaugural gala, hundreds of tiny red canaries were set free in the Galeria. The interior showcased carved marble fountains and balustrades, wood-beamed ceilings and intricate marquetry, a Baroque bronze doorway and stairwells, Venetian glass chandeliers and gold-painted, wrought-iron gates, plus an ornate, indoor pool complex constructed of gold, blue and green mosaic tiles. An early advertisement boasted of the “beautiful modern interpretation of Renaissance architecture influenced by the solidity of the Italian, the richness of ornament of the Spanish, and the grace and beauty of the French.”

Italian artist Giovanni Battista Smeraldi (known in the U.S. as John B. Smeraldi, who also painted inside the Vatican and the White House), as well as 50 other artists and artisans, created frescos and murals featuring Greek and Roman gods, mythological creatures and the “Biltmore Angel,” a symbol of both the city and the hotel. With art-filled walls, tapestries and sculptures, the spectacularly splendid results belie the reality that the grand columns are hollow and the 24-carat, gilded ceilings decorate plaster.

In 1969, the city designated the hotel a Los Angeles Historic-Cultural Monument. Subsequently, new owners who invested $30 million to restore the lobby, Music Room, Renaissance (Emerald) Room, Gold Room and Galeria, enlisted Anthony T. Heinsbergen, the American muralist whose father worked as Smeraldi’s apprentice. He developed a special formula to meticulously remove the smoke and dirt from the Crystal Ballroom’s ceiling and applied a buttermilk coating to protect the murals. In 1980, the hotel received the prestigious American Institute of Architects National Honor Award.

These extravagant public spaces have hosted World War II soldiers for R & R and countless social, political and business events. Recognizable celebrities appear in mural-sized photographs, illustrating one of the multiple Hollywood functions held at the hotel, including the Academy Awards eight times between 1930 and 1943.

John F. Kennedy called the Music Room (the current lobby) his 1960 campaign headquarters, while Lyndon B. Johnson was ensconced in the Emerald Room (originally the main dining room).

Since 2012, the five main ballrooms were recarpeted and in 2013, the hotel rebranded one of its dining outlets, Bugis Street Brasserie, L.A.’s popular Singaporean-Chinese restaurant. In spring 2015, the hotel launched a multimillion-dollar phased refurbishment of the 683 guest rooms, enlarged from the original 1,500. The spacious guest rooms are redecorated with a contemporary gray palette and outfitted with crown moldings, wood furnishings and classic draperies that feel invitingly serene.

This landmark is a truly grand destination. And if that weren’t enough, as with any proper landmark hotel in Los Angeles, the Biltmore has had its share of cameos and close-ups, appearing as the Sedgewick Hotel in “Ghostbusters,” the Pressman Hotel in “Fight Club” and the Beverly Palms Hotel in “Beverly Hills Cop,” among numerous other cinematic appearances. 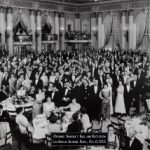 Pictured here is the first of many black-tie gala dinners held in the Crystal Ballroom; this one celebrated opening night of the Biltmore on October 2, 1923. 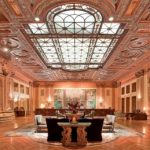 The original and elegant Music Room — with its classical marble fountain and ornate angels — became the lobby in the 1970s, when the hotel moved the entrance to Grand Avenue because it needed a porte cochère. 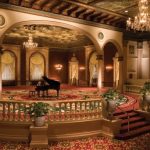 The Gold Room, which was frequented for afternoon tea, dinner and dancing in the 1920s, is named for its gold-painted coffered ceiling and also boasts gold frieze, a baby grand piano and decorative curtains. 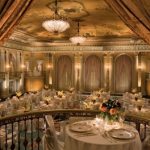 The Crystal Ballroom hosts one of Giovanni Smeraldi’s masterpieces and features balconies between tall columns topped by capitals freshened with gold leaf; two original crystal-laced Austrian chandeliers; and a ceiling painted in the Roman style of the 1st century. 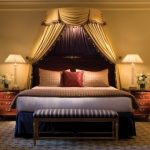 Majestic canopies and a blue- and gold-hued décor distinguish Club Level accommodations, which also include access to a 24-hour lounge. 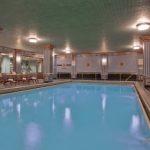 The Health Club pool built by Gladding, McBean and Company has a nautical motif with a cruise-ship railing and is surrounded by shell decorations in brass and polychrome terracotta tiles. A scene with Warren Beatty in the 1991 film “Bugsy” took place here.