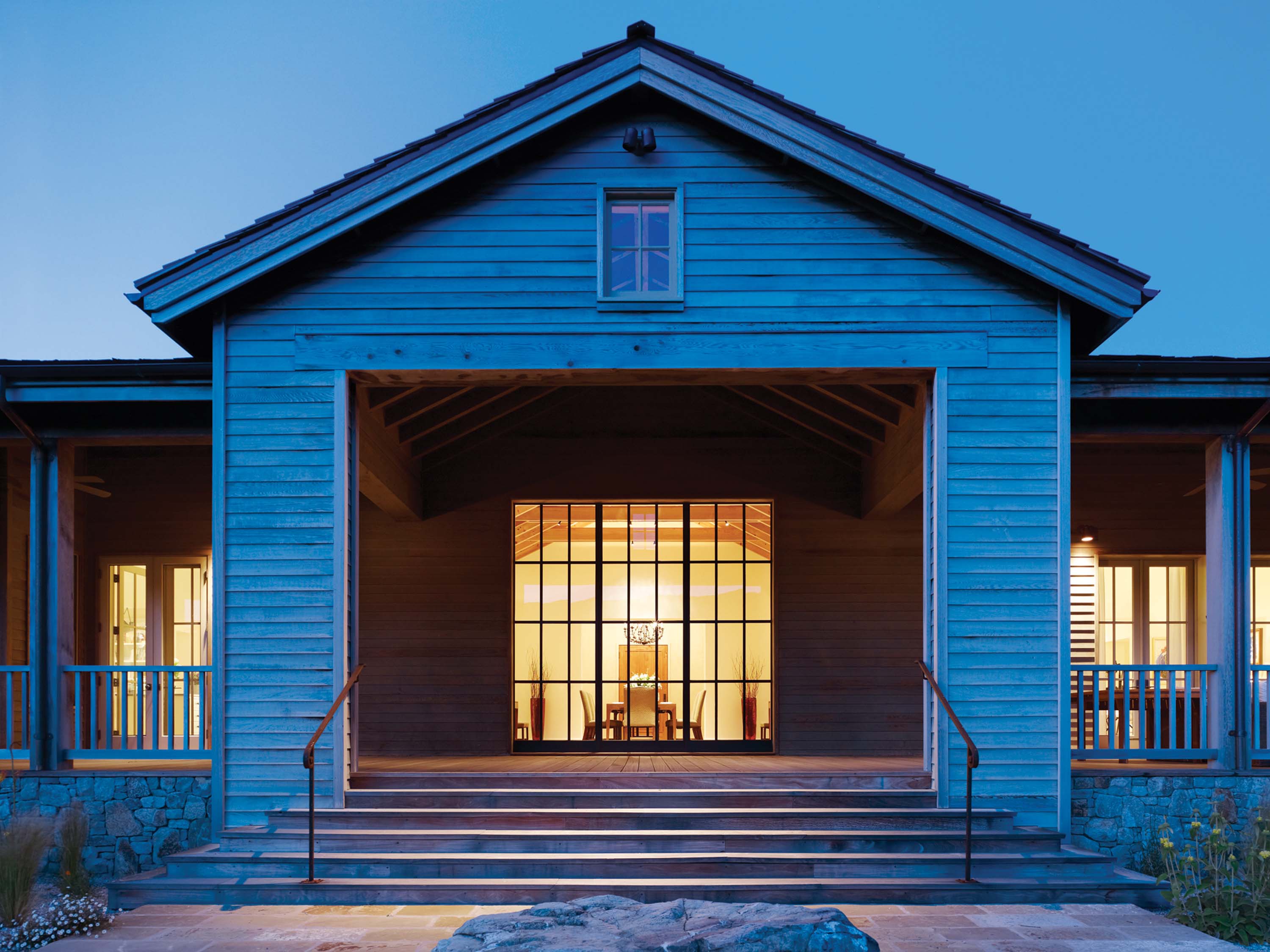 At night, against the cornflower blue sky, the wooden exterior makes the home look almost as if it is candlelit.

TO APPRECIATE THE REMOTENESS OF THE SANTA LUCIA PRESERVE, consider that a thousand years had passed after humans first inhabited the Monterey Peninsula before this land was discovered by the Rumsen Indians. Given a modern-day perspective, bear in mind that the stone-wall gate to this community in the foothills of the Santa Lucia Mountains is only three miles from the town of Carmel-by-the-Sea.

An eight-mile drive on a spidery road, up 3,000 feet and above the coastal fog, leads to 20,000 acres (31 square miles) under the stewardship of the Santa Lucia Conservancy.

Constructed with Western red cedar and may-inspired oversize windows, the may design aesthetic was achieved through a magnificent blending of dramatic landscape and indoor/outdoor design.

Of this expanse, 18,000 acres will forever remain intact, with the rest designated for developers, as one of the largest private land holdings in coastal California. Within this isolated parcel, 300 home sites exist where the element of solitude is enhanced by tower- ing oaks, rolling savannahs, wetlands and seasonal streams.

The geography helped lure one couple residing in a grandiose 17th-century country estate outside of London. British-born Anna and her American-born husband, Fred, had always spent their annual family holidays on Kiawah Island, South Carolina, but the summer humidity was unbearable for the avid golfers. After visiting Santa Lucia Preserve on an invitation from a friend (also one of its original developers) and experiencing the mild temperatures of a property accented by a world-class Tom Fazio-designed golf course, the couple found a new haven.

Without much deliberation, they purchased 18.64 acres and commis- sioned a 9,700-square-foot eight- bedroom home with a separate caretaker house, pool house and garages perched on a section of meadowland at the breaking point of the hill and overlooking the 13th hole of The Preserve Golf Course. The property is a quarter mile from the nearest neighbor.

With plenty to gaze upon at the Preserve, all of the architecture needs to be subordinate to the land, and this home is no exception.

“Being slightly elevated to provide views but not so far up that it looms over the valley and grassland, the home sits at the ideal spot,” says Richard Beard, FAIA, the home’s architect while a Senior Principal at San Francisco-based BAR Architects (he has since launched his own firm, Richard Beard Architects). Beard has a reputation for integrating architecture with interior and landscape design. “It’s also perfectly positioned between big oak trees because views are usually a lot more interesting if there’s something in the foreground.”

With plenty to gaze upon at The Preserve, all of the architecture needs to be subordinate to the land, and this home is no exception. Anna and Fred’s vision was to live in a California ranch home based on the models of Cliff May, the recognized father of that style of architecture. To achieve that goal, the couple hired BAR Architects and BAMO, a San Francisco interior design firm whose residential and hospitality portfolio includes such clients as Four Seasons, Ritz-Carlton, Rosewood, as well as private residences for a number of visionary entrepreneurs. Constructed with Western red cedar and May-inspired oversize windows, the May design aesthetic was achieved through a magnificent blending of dramatic landscape and indoor/outdoor design. The home is a warm and comfortable refuge for the couple’s extended family.

The project proved to be a fluid collaborative effort between architect, designer, contractor and client. To satisfy Anna’s sophisticated aesthetic and to design space for inherited family artifacts brought from England, the architecture is extremely clean and straightforward; the refined interior complements the roughness outside.

“The interiors follow the architecture with light and airy spaces designed to take advantage of the broad views,” says Michael Booth, Founding Principal at BAMO. “It’s very livable and exudes a simple elegance.” The couple loves to entertain and frequently hosts overnight guests, so the house was planned with expansive porches and a public area living and reception room space apart from the master wing containing his and her bedroom suites, plus a shared living room. The guest wing contains six bedrooms, each designed like luxury hotel suites with its own bathroom. “They wanted it to feel like a home but also wanted that hotel sensation of checking in and checking out,” says Booth.

As he does after finishing every project, Booth retreated outside at night to look back at the couple’s home. “With no outdoor lighting allowed at any of the homes here, the indoor lamps helped cast a glowing, warm setting instead of the structure looking like a spaceship,” says Booth. “The whole house functioned just as I imagined it would and then some.”

It’s a home that will surely stand the test of Anna and Fred’s time and for their future generations as well. 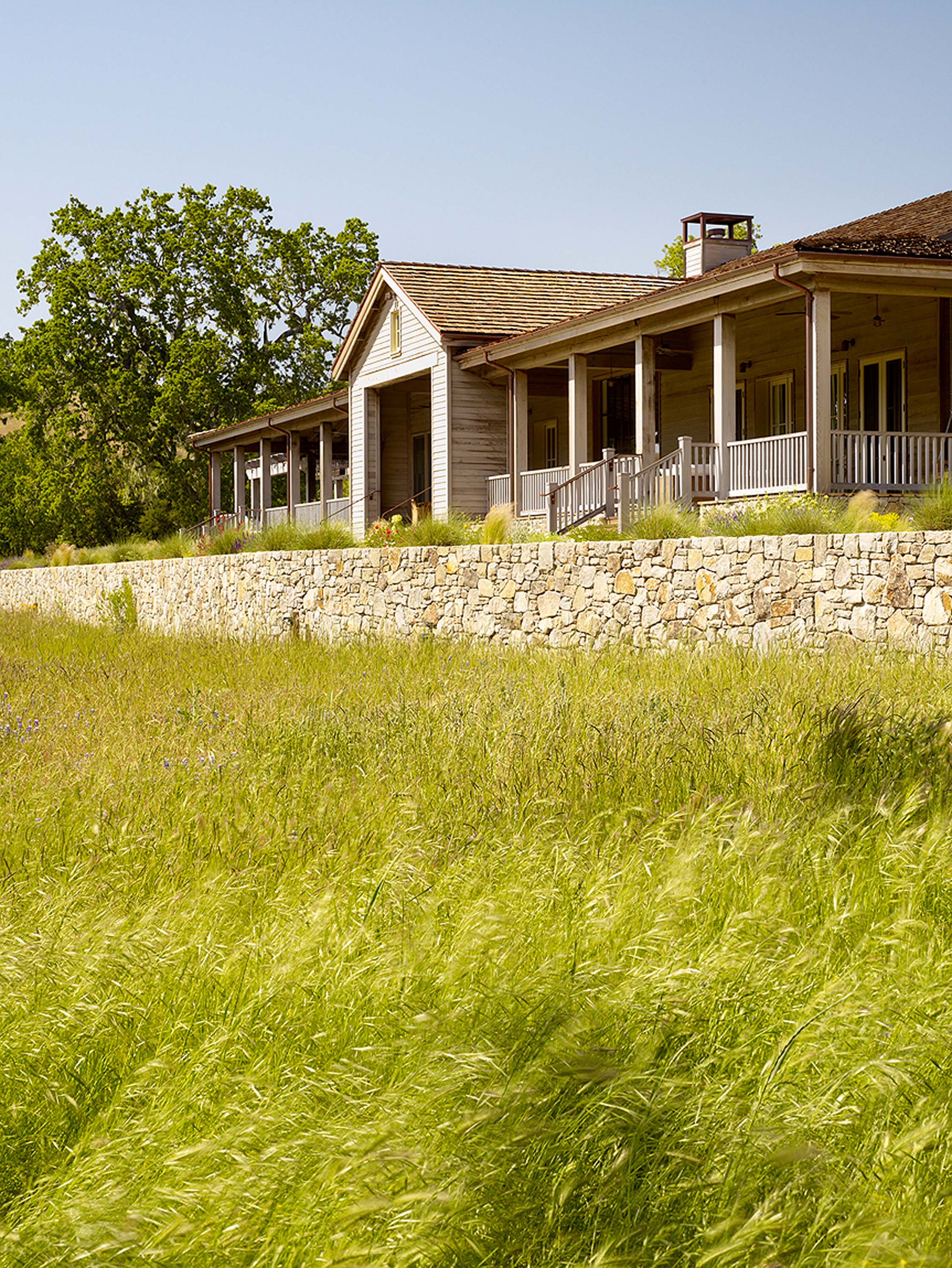 With native grasses that move like water in the breeze and flowering plants behind stone walls, the home’s landscaping looks like it was designed by Mother Nature herself. 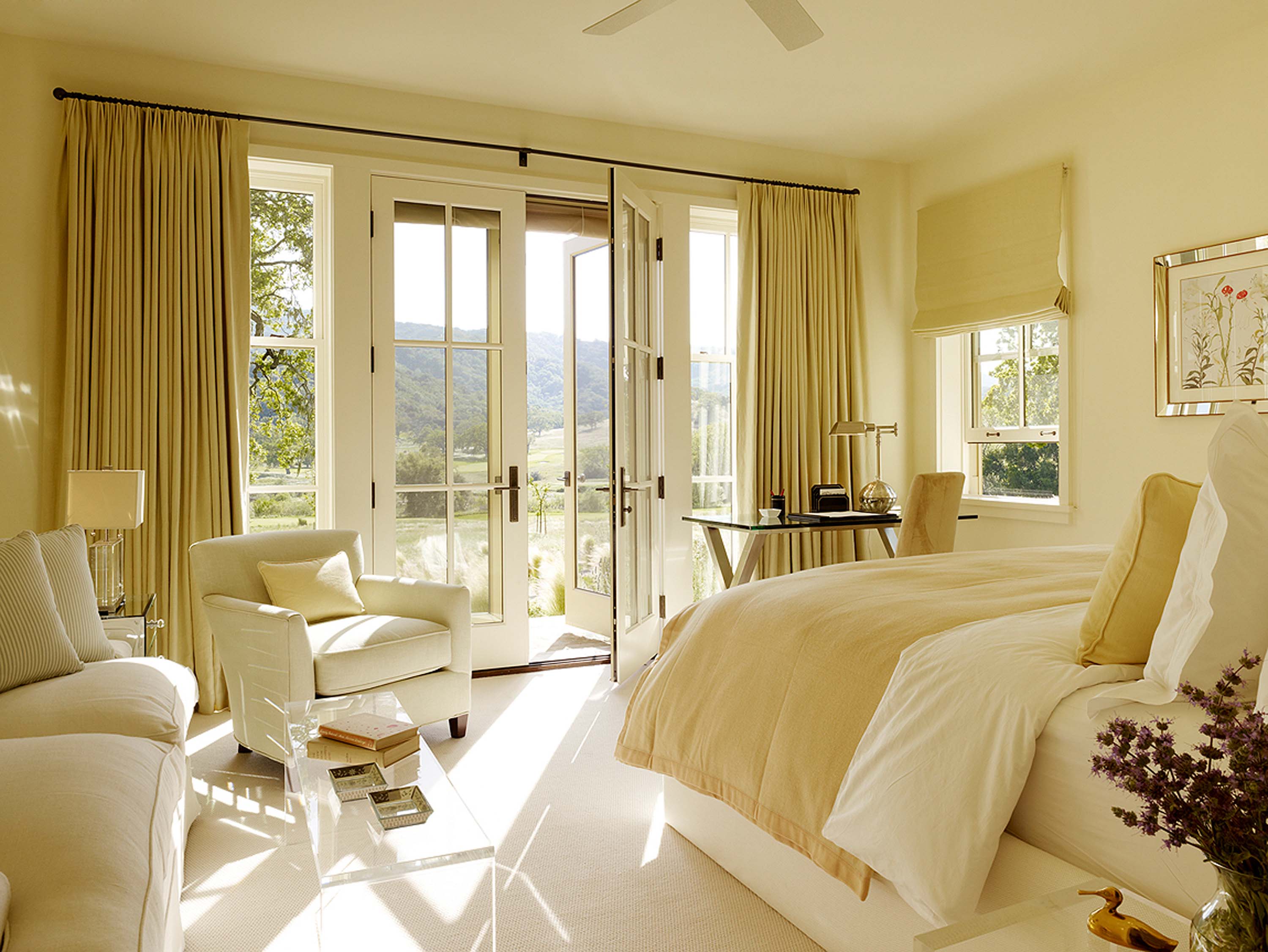 All of the guest rooms in the home have private outdoor areas. 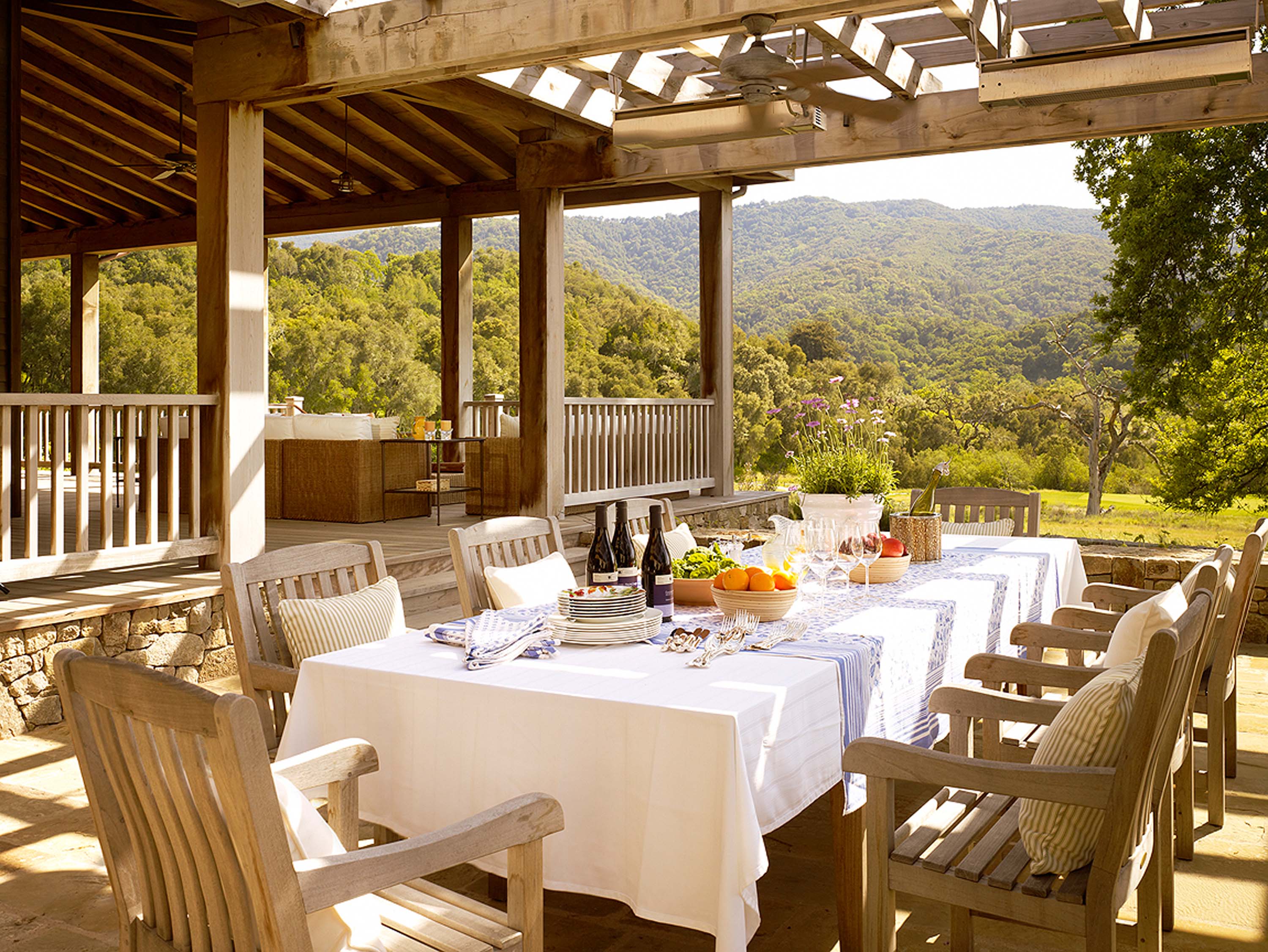 The family loves to entertain on their outdoor terrace which faces the meadow and golf course. 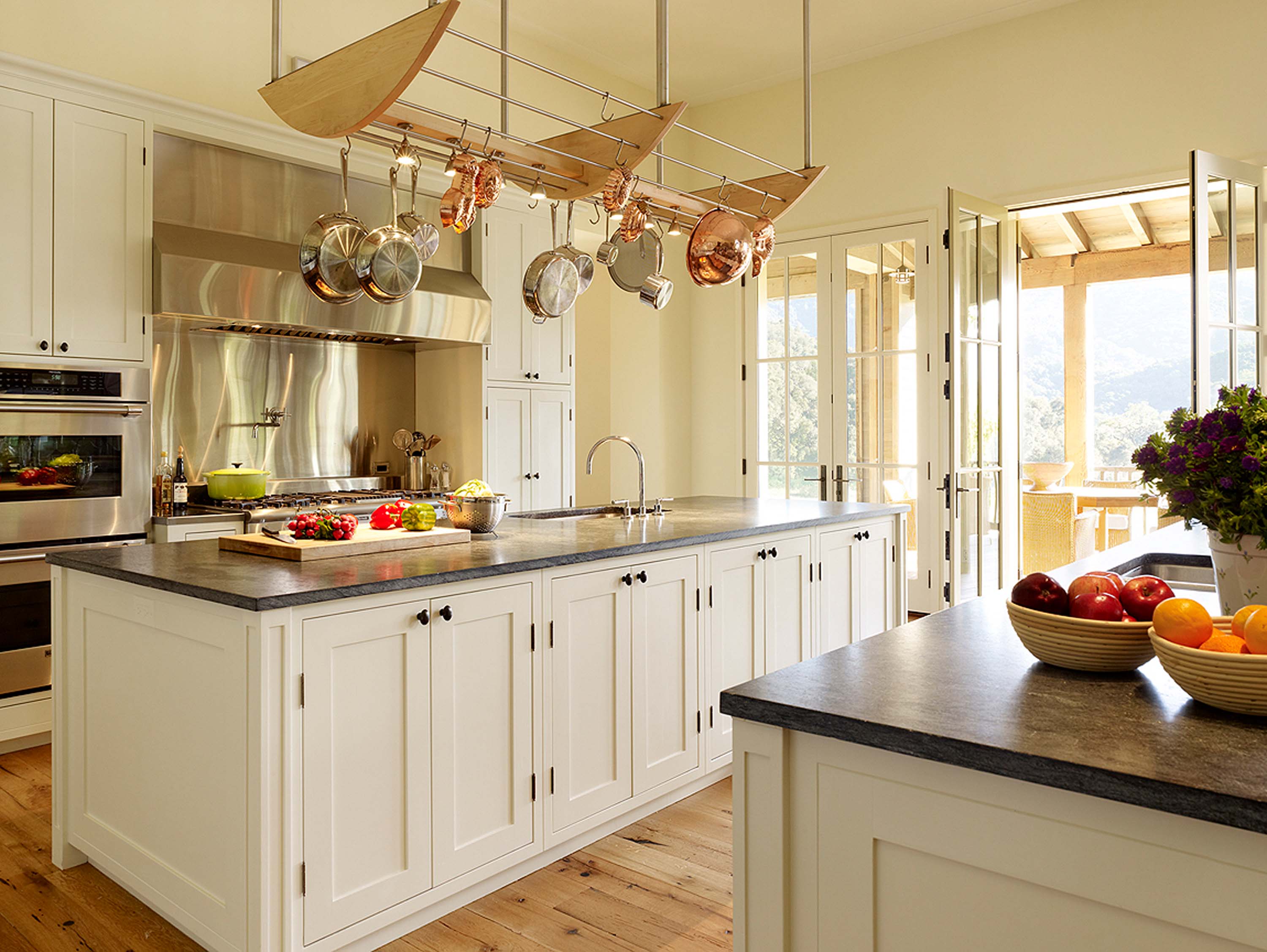 The kitchen, located off the family room, is a chef’s ream with farmhouse charm. 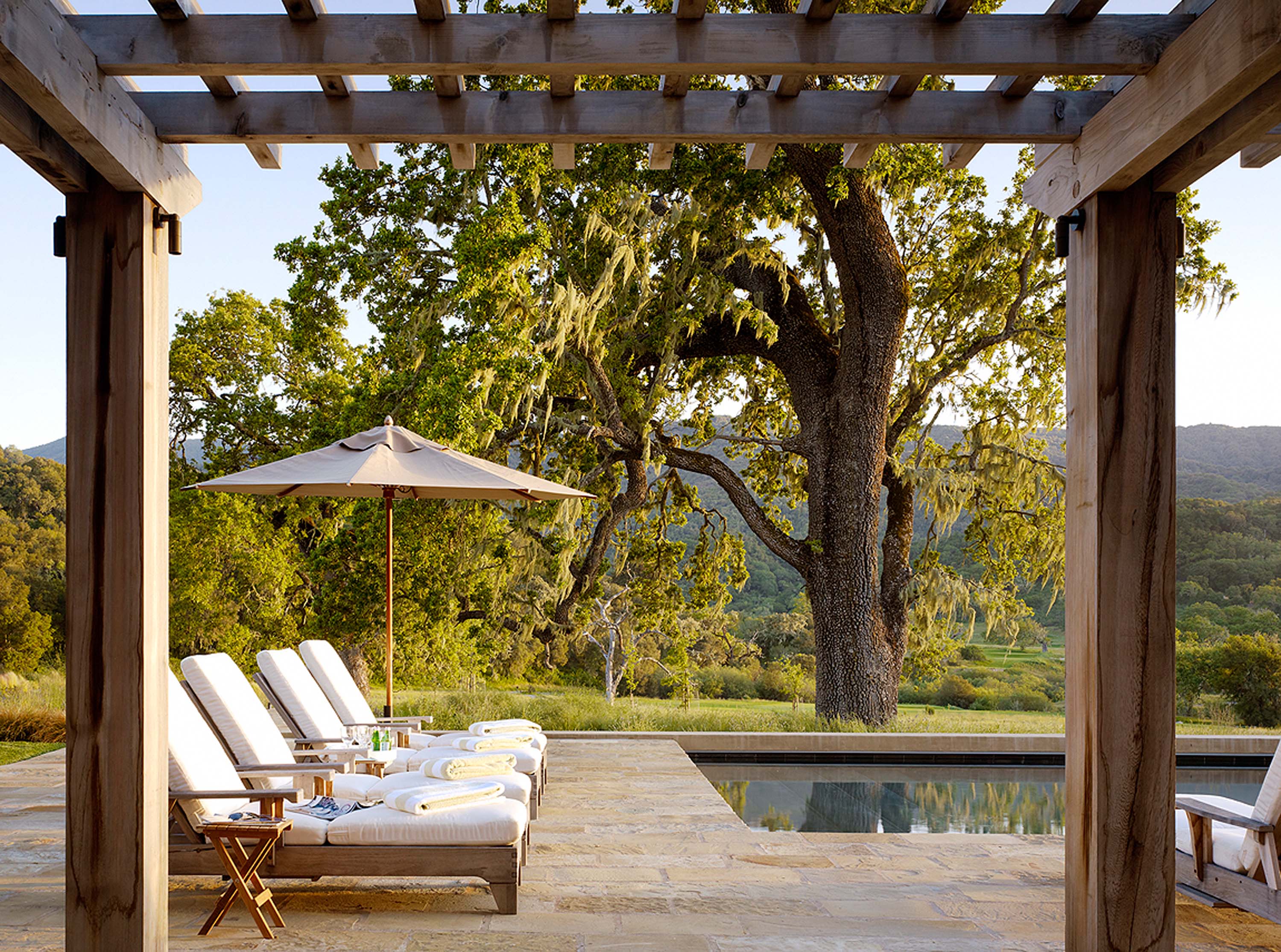 The pool house terrace provides another spot for relaxing and drinking in the pastoral landscape.

The kitchen, located off the family room, is a chef’s ream with farmhouse charm. 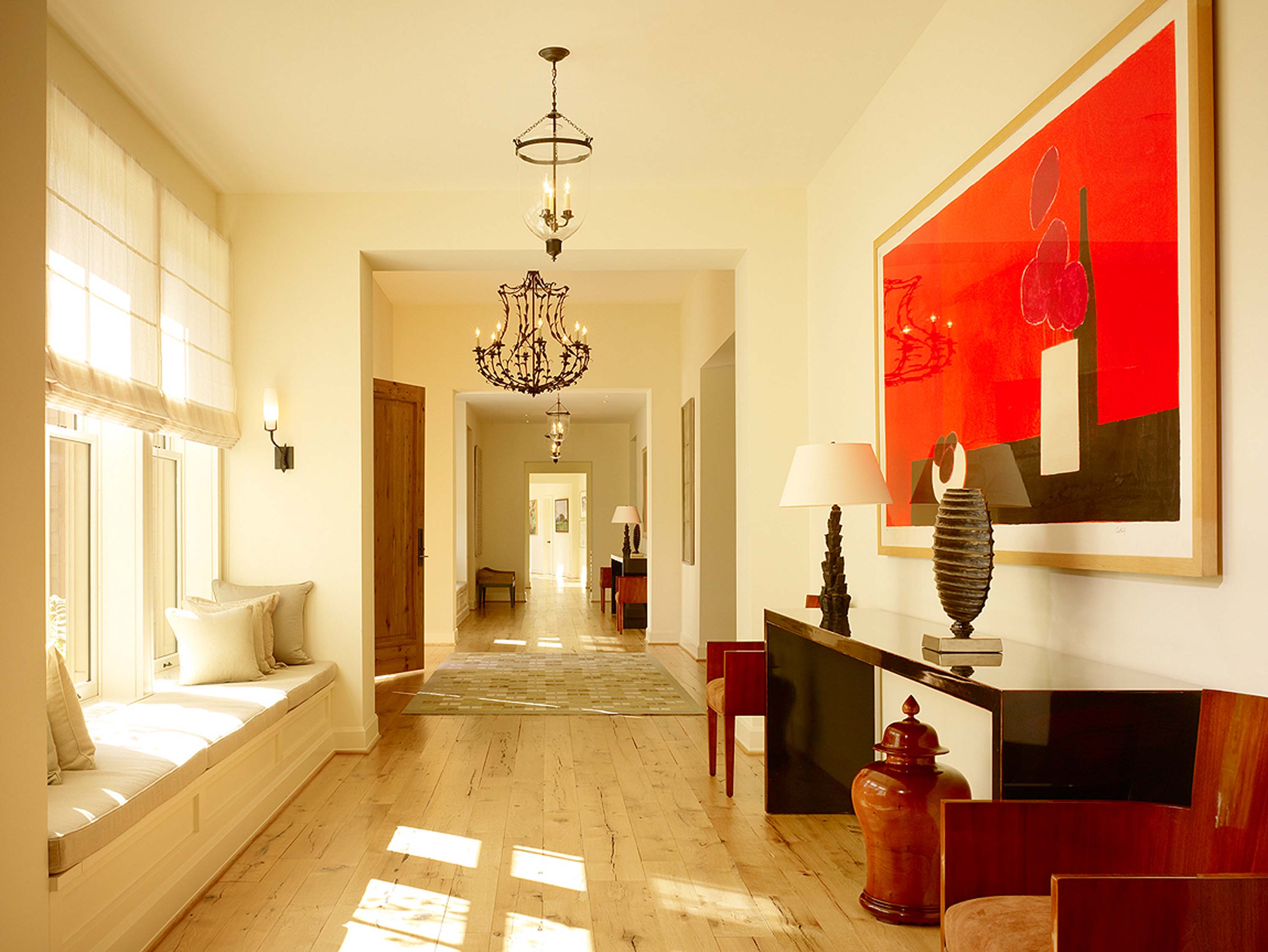 In the front hallway, expansive but comfortable window seats allow for relaxing in a pool of sunlight. Here too art, furnishings and antiques provide a stunning contrast to the earthy and creamy palette of the interiors. 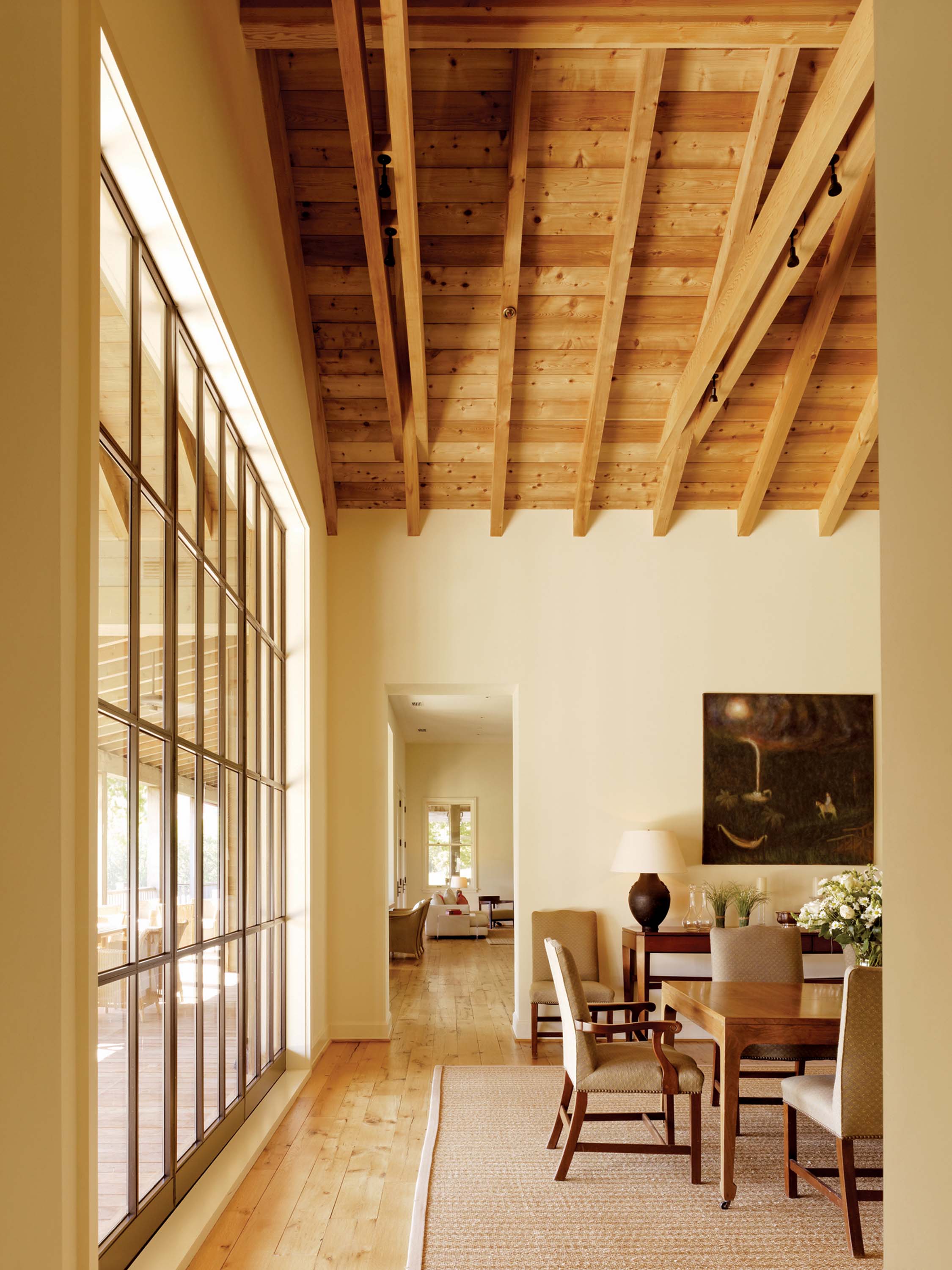 Exposed ceiling timbers and paneling add warmth to the dinning room and floor-to-ceiling windows wash the space in sunlight. 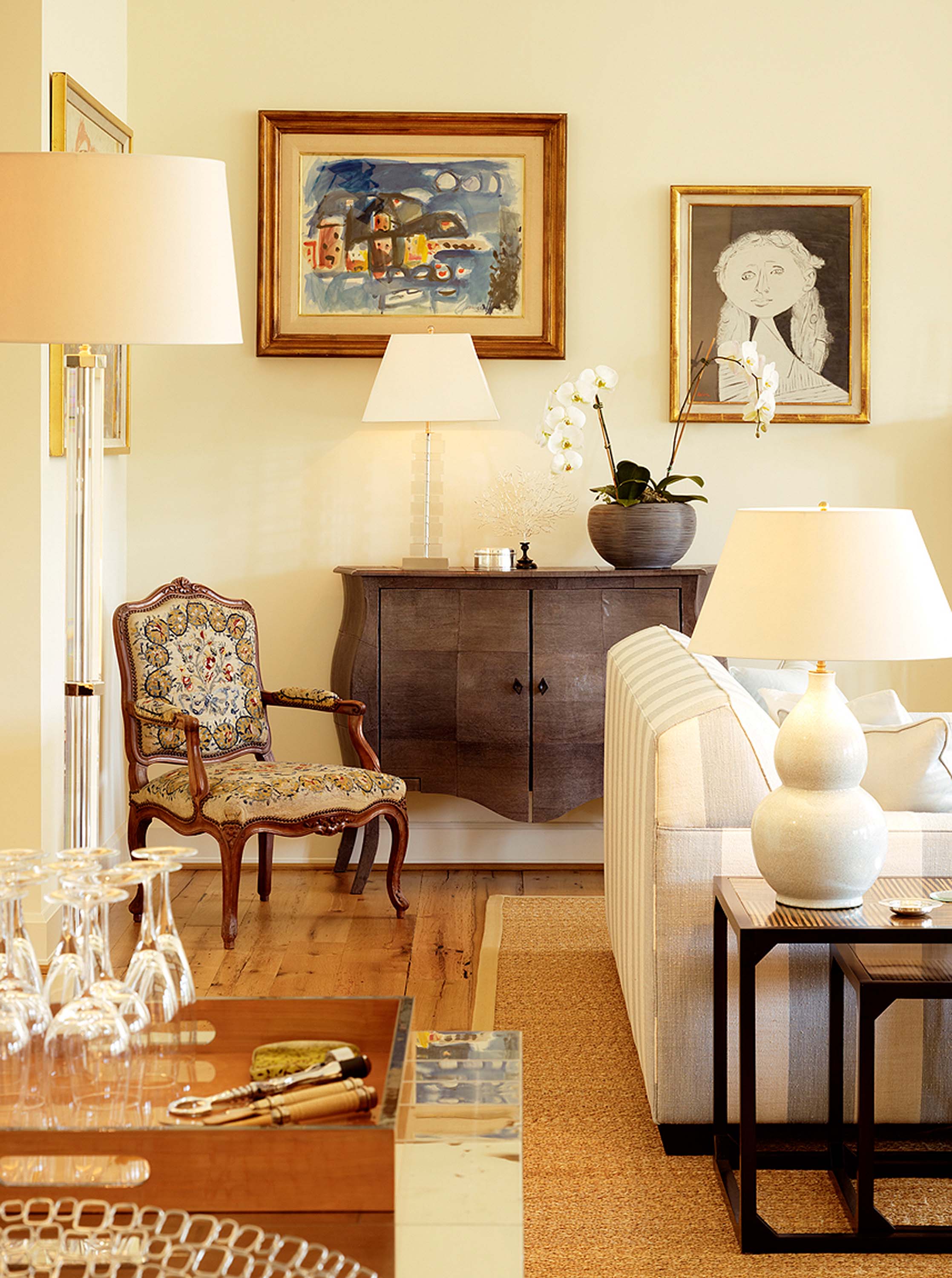 The drawing room is awash in neutral tones of cream and white, allowing the couple’s artwork and heirloom furnishings to stand out. 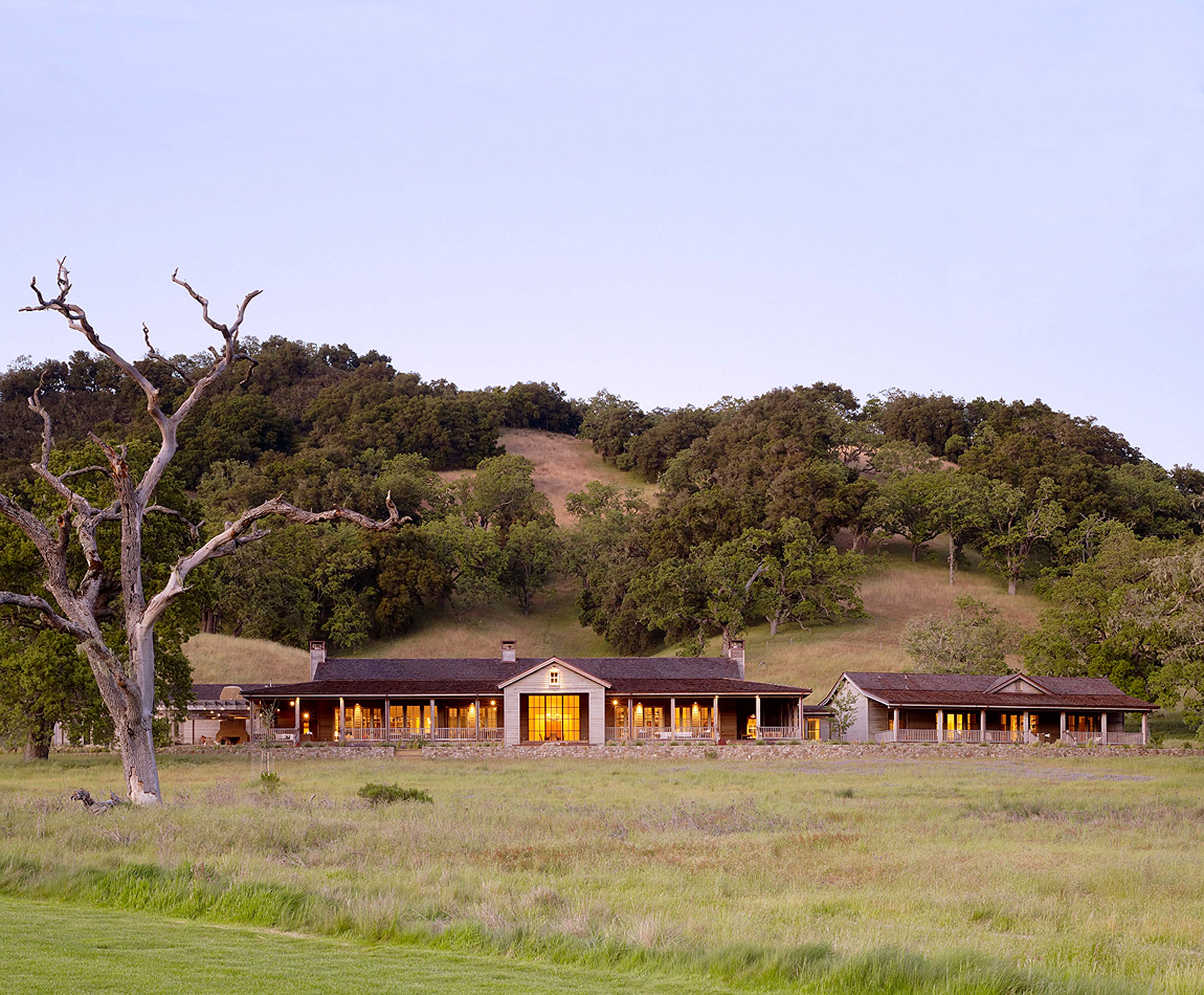 Seen here from the 13th fairway of the Preserve’s golf course, this Santa Lucia estate is nestled into the landscape. The Master bedroom wing is to the right and the main living spaces occupy the center of the home. The meadow between the fairway is full of native grasses and wildflowers.