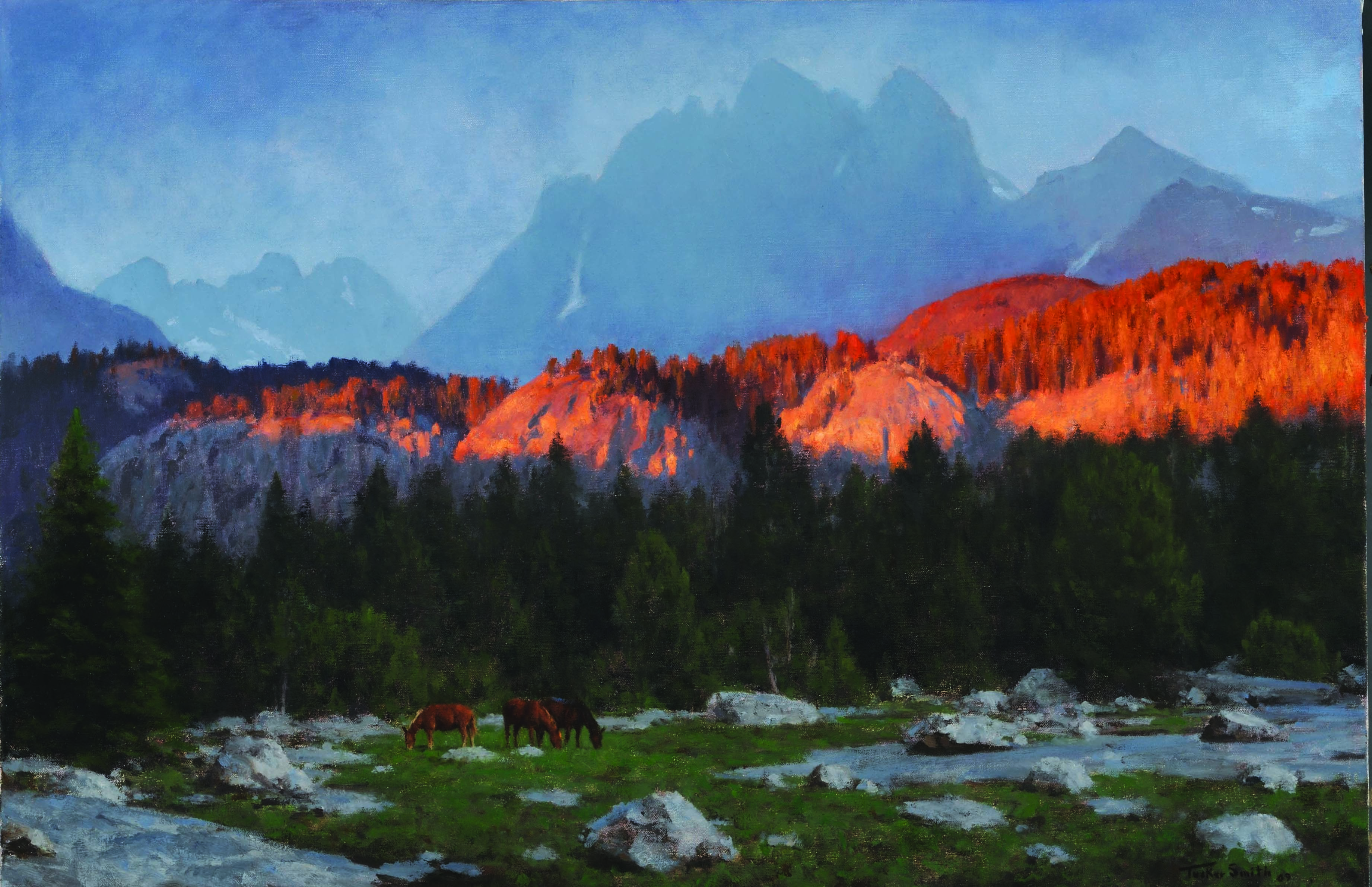 Think Cézanne at Mont-Sainte Victoire. Monet at Giverny. Van Gogh at Arles. Bierstadt in Yosemite. Or Russell Chatham, even, in a dell named Paradise. Pick a setting that’s been glorified two-dimensionally for visual posterity. What does it say about the artist’s relationship to that piece of terra firma? Is it enduring or ephemeral? Was it painted as a drive-by or a love letter?

Some venerated places on earth, like the artists who portray them, defy easy description. “Every landscape has its own intrinsic value, but there are some landscapes that are so valuable to our souls and character that they must be protected,” says Wyoming painter Tucker Smith.

Smith’s way of protecting places is by revealing them. Several years ago, my wife and I were hiking behind a pack train of horses led by a cowboy outfitter named Todd Stevie. We were walking because of my debilitating allergy to horse dander.

Stevie had not organized our exhibition into the remote Wind River Range. The planning fell upon Smith, a perpetually unassuming artist who had returned to the Upper Green River Valley as part of a permanent homecoming. And he was riding stoic yet buoyant in the saddle.

After a stretch of living in Montana, raising a family and generally feeling as if he was dwelling in geographical absentia, Smith and his wife, Jean (whose courtship began as high- school sweethearts in the 1950s), had gravitated back to the source of their roots. They had designed and built an abode made of logs pressed up against the edge of roadless wilderness. The setting gave Smith a studio view of distant high peaks bathed in natural light. And in the years since it has proved to be a potent springboard.

The year 2012 marked yet another big one for Smith. The public was treated to a breathtaking portrayal of a bison, Return to the Prairie, that debuted at the Autry Museum’s Masters of the American West show. He delivered a radiant elk study to the Salmagundi Club show and a masterwork of bison to help raise funds for the American Prairie Reserve that is hoping to restore a wild buffalo herd to the banks of the Upper Missouri River. He was the featured painter at the National Museum of Wildlife Art in Jackson Hole and was responsible for the top-selling painting — Through the Pines, which sold for $40,000 — at the museum’s 25th Annual Western Visions Show & Sale in September. On top of it, there has been robust interest in Smith’s works at auction and a flurry of commissions bound for private collections.

To an observer, it’s important to ponder how far Smith has traveled. On that summer I mention from long ago, Tucker and Jean Smith had invited us to tag along with a handful of artist friends on a trek that has become a ritual and a rare treat: tracing the emerald, serpentine flow of the Green River — a contributory of the Colorado — high into its alpine birthplace. In the big picture, it’s sanctified artistic terrain.

A century earlier, Carl Rungius, then a newly landed immigrant from Germany, had followed old Indian paths and wild game trails to the vicinity of Vista Pass where the scenery fueled his ambitions as a painter. Decades before, Albert Bierstadt had passed by the foot-hills and still earlier, in 1837, Alfred Jacob Miller offered, in oil, the Winds’ first introduction to the wider world.

While Smith is too modest to ever call himself a “Rungius scholar,” his knowledge of the master’s historic forays is impressive. As an artist himself, his own reputation then was in rapid ascent.

In 1990, Smith won the most coveted honor given to a living contemporary Western artist, the Prix de West Purchase Award. His stunning oil, Return to Summer, portrayed a herd of bison along Montana’s Rocky Mountain Front. Around the same time, the National Museum of Wildlife Art commissioned him to paint what has become one of the most popular pieces in its permanent collection, a massive horizontal titled The Refuge, depicting elk wintering on the National Elk Refuge.

Both confirmed what a loyal, growing base of collectors already knew — that Smith was among the premier wildlife artists in America. Refusing to rest on his laurels, he was determined to expand his palette by immersing himself in the outback just as Rungius had done. But unlike the others, he was there to remain in admiration, no mere interloper.

Joining him on our foray were two enormously talented plein air artists, Utahan Jim Morgan and

New England maritime artist Chris Blossom, the latter going on to win Prix de West in 2010. What those few days in the backcountry taught me is that as desired as Smith’s finished studio paintings are — they command princely sums at auction — a detail that many collectors fail to grasp is how well-informed each work is by stacks of vibrant field studies that serve as his original research.

They reveal not only a looser and more impressionistic aspect of Smith, but they speak to the welling emotion that beats in his chest. Today, there’s good reason, says art collector William Kerr, co-founder of the National Museum of Wildlife Art, why Smith has earned the title “Painter of the Winds.”

“At the top of his game, Tucker Smith is like Rungius,” explains Kerr, who has accompanied the artist on wilderness treks. “He can convey the spirit of a place. There’s a magic in those mountains that artists who are open to it grab on to.”

If anyone knew the exaltation of a setting, it was Wilson Hurley with the Grand Canyon and the nearby complex of red, pink and orange slickrock enveloping the Four Corners that was his muse.

Before he passed away in 2008, I had asked Hurley about Smith, to whom he had offered friendship and mentoring over the years. “The trick,” said Hurley (a 1984 Prix de West winner), “is that when you are closely associated with a place, you must avoid the cliché. Your job as an artist is not to confirm a person’s expectations but expand them. Everyone knows how Rungius painted the Wind Rivers. He (Smith) is opening them up in another way and that’s a perspective that is his own.”

Almost perennially, Smith has been cited for his work and rewarded. In 2010 and despite the deepest trough in the economy, a medium-size depiction of elk, Gardner’s Hole, sold for more than $80,000 at the Autry show. Another new, exquisitely designed piece, The Cut Bank, sold at the 2010 Coeur d’Alene Art Auction for $64,000, while a 1998 moose piece, October Ice, was gaveled at $58,500.

“There’s good reason for that,” says John Geraghty, a longtime Autry trustee. “He is to his generation what the great artists of the past were to theirs.”

What is the secret of Smith’s resonance? Some 15 years ago, Morgan offered an explanation that still rings true: “Tucker paints vibrantly, but he isn’t an artist who paints loudly as if to say, ‘Hey, look at me,’” he explained. “When you see his work on the wall at a museum or a big art show or auction, you realize there is a lot going on in the subtlety. His approach to painting is intuitive. Behind every animal or human figure painting is a landscape, and as you become familiar with them, they start to live inside you.”

Born in St. Paul, Minnesota, in 1940, Smith was 12 years old when his family moved to the cowboy town of Pinedale, Wyoming. Even with a minor in art from the University of Wyoming, Smith parlayed his degree in mathematics into a good job as a systems analyst and computer programmer with the state of Montana.

In the early 1970s, having just entered his 30s, Smith, with support from his wife, started painting full time. His work caught the attention of David Usher, founder of publishing company Greenwich Workshop, which reproduced several of Smith’s portrayals of historic trains and Western pastorals. The limited editions were huge hits.

When asked about his evolution, Smith notes: “My art training came from instructors with a Modern bent. They seemed to care less about the craft than they did about social philosophy. I had to hone my craft through experience with help from fellow artists. The positive of this is it put me on a lifelong learning curve. I am still trying to look and learn. I hope I will be able to improve my future paintings by seeing better.”

Smith was introduced to plein air painting by Bob Morgan in Montana and he went afield with the man who is arguably the best living landscape painter in that state,

Clyde Aspevig. “For me, plein air is a process of gathering information,” Smith says. “The value of plein air is observing the light and color of nature without being filtered through the camera. The time constraints of putting it down is the challenge and is what gives them their character, but the primary purpose for me is the information gained to be used in easel painting.”

The alumni of Smith’s plein air missions into the Winds include a veritable who’s who of Western painters: Morgan, Blossom, Aspevig, Carol Guzman, Ralph Oberg, Bill Anton, John Potter, Andrew Peters and Lanny Grant. “We share our ideas on methods and materials, but basically we do our own thing,” Smith says. “Everyone’s approach and vision is different. What we value most is the camaraderie.”

Smith represents more than an ambassador for the Winds among artists. In 2007, when he handed out a Governor’s Art Award to Smith — the highest art accolade in the state — Governor Dave Freudenthal said: “Tucker Smith has been called one of the most significant contemporary wildlife painters working today, and has achieved international stature for his work. Recognized with numerous national and international awards, Smith’s paintings capture the special qualities of Wyoming’s treasured wildlife and wild places.”

“I would rather convey a mood while portraying reality,” Smith says. “I want to paint the actual rather than the ideal, and I try to avoid sentimentality and nostalgia.”

Pleased to see how “wildlife art” continues to gain popular traction in the modern world, Smith isn’t a Luddite, though there are two things he doesn’t stow in his horse panniers: iPhones and iPads. “I think that as technology and increased population have separated people from nature, many either consciously or unconsciously yearn for our primal connection with nature. Art can remind us of that connection,” Smith says. I like to think artists have had an influence.”

Although art historians count Smith among the finest wildlife artists of the last half century, he says he still is climbing the mountain, claiming no higher ground over his peers. “I don’t think of it that way. As an artist, I consider myself young with a long way to go. I can relate to those younger artists who are working hard to learn more, because that’s what it takes.” 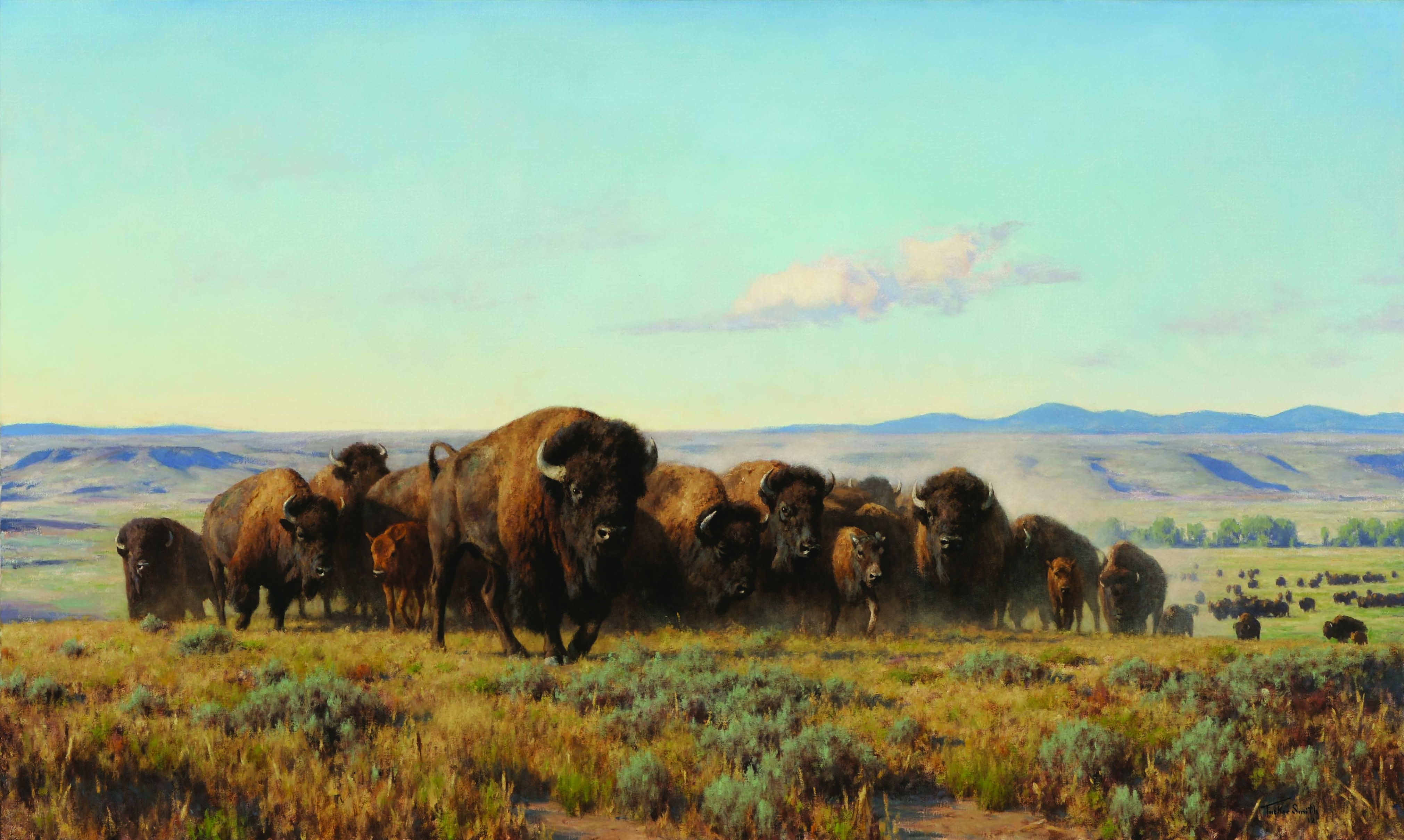 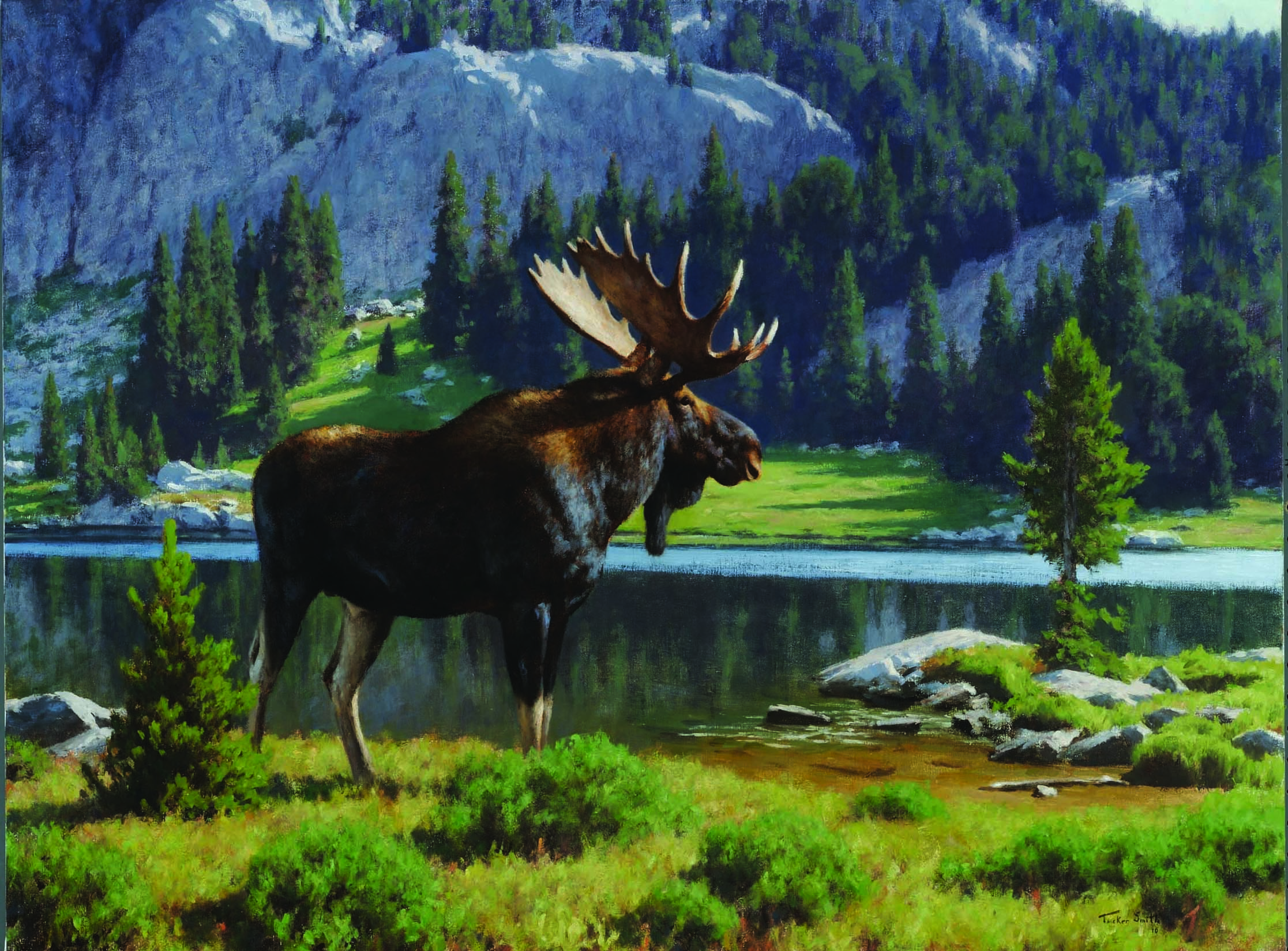 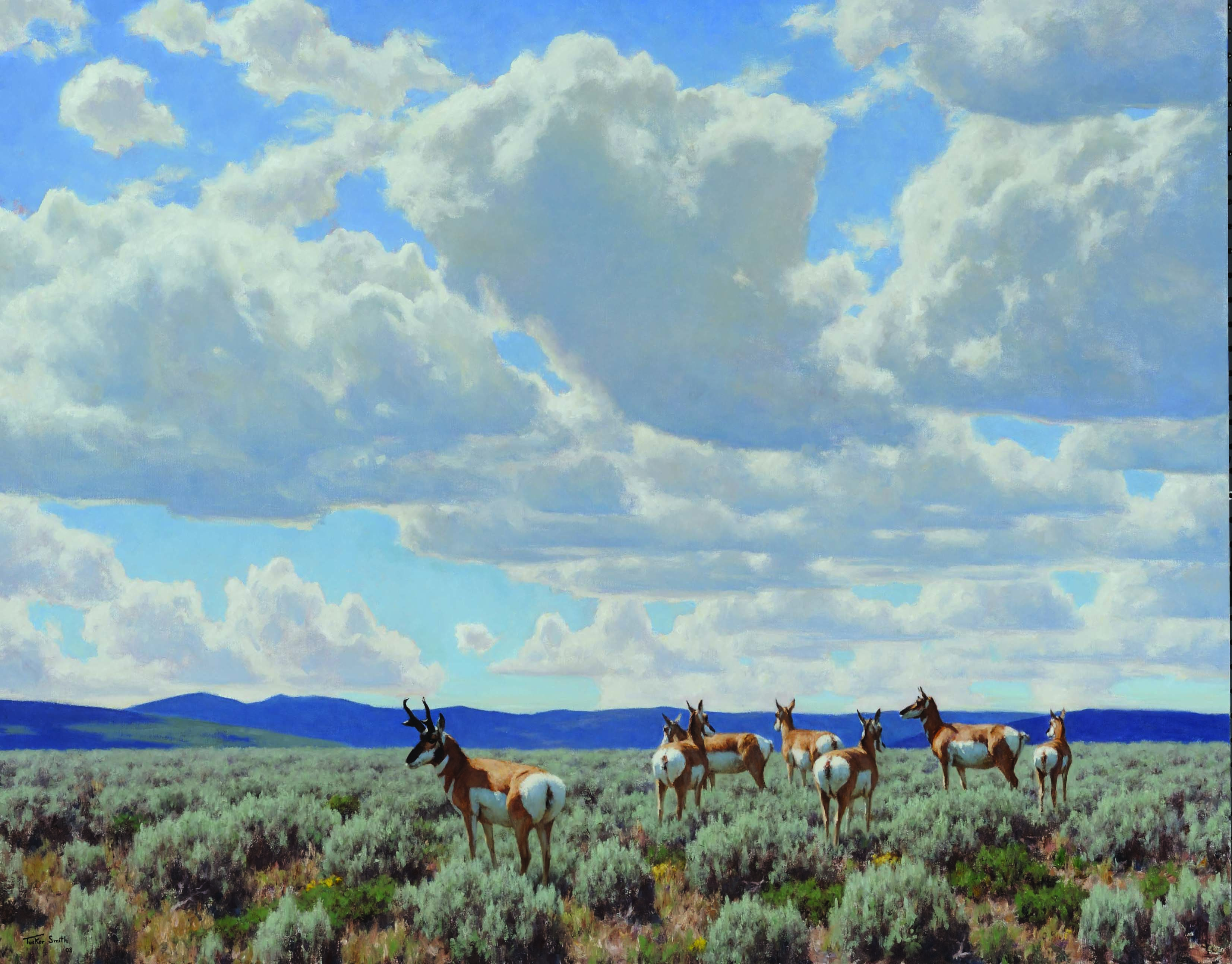 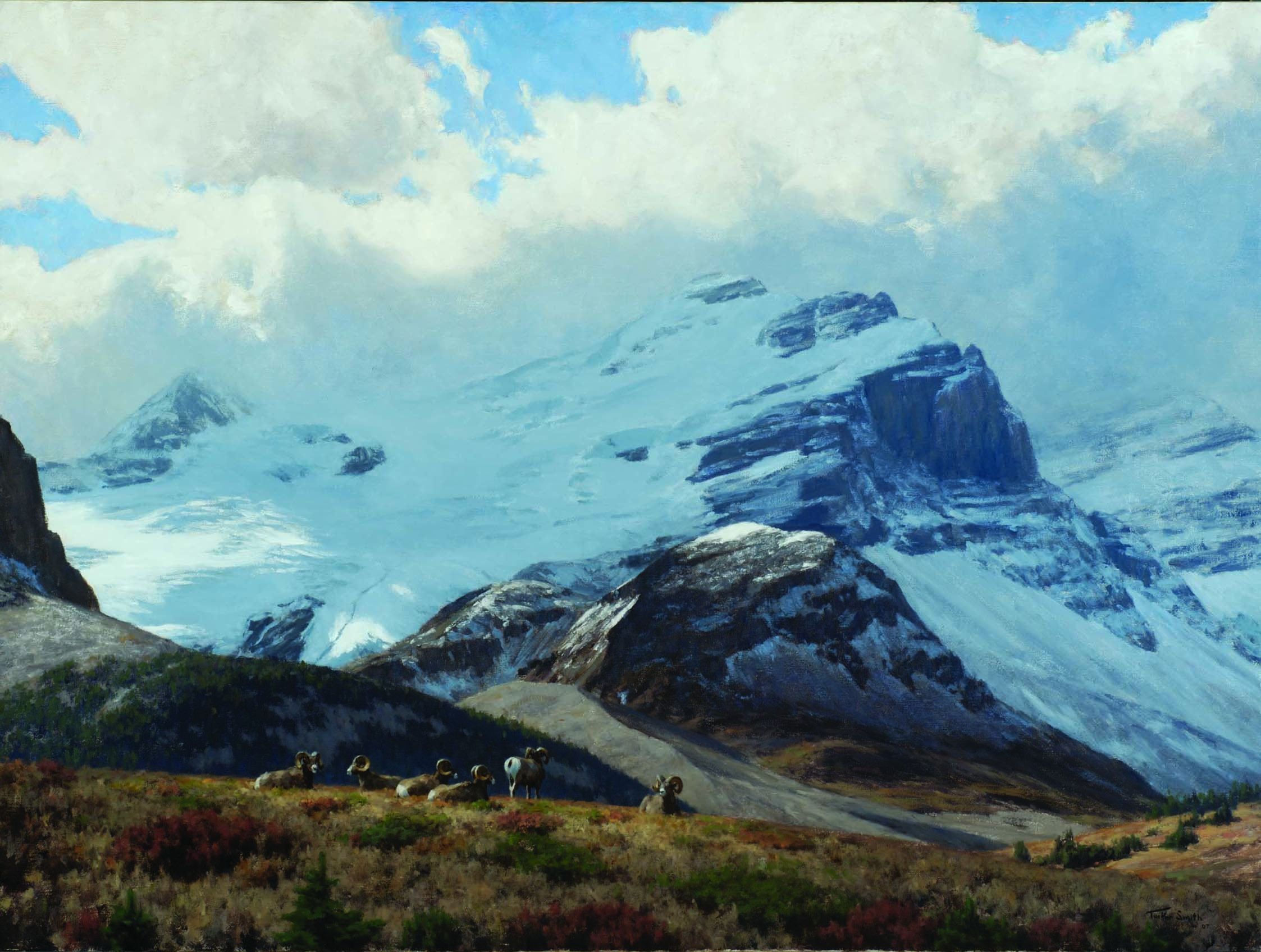 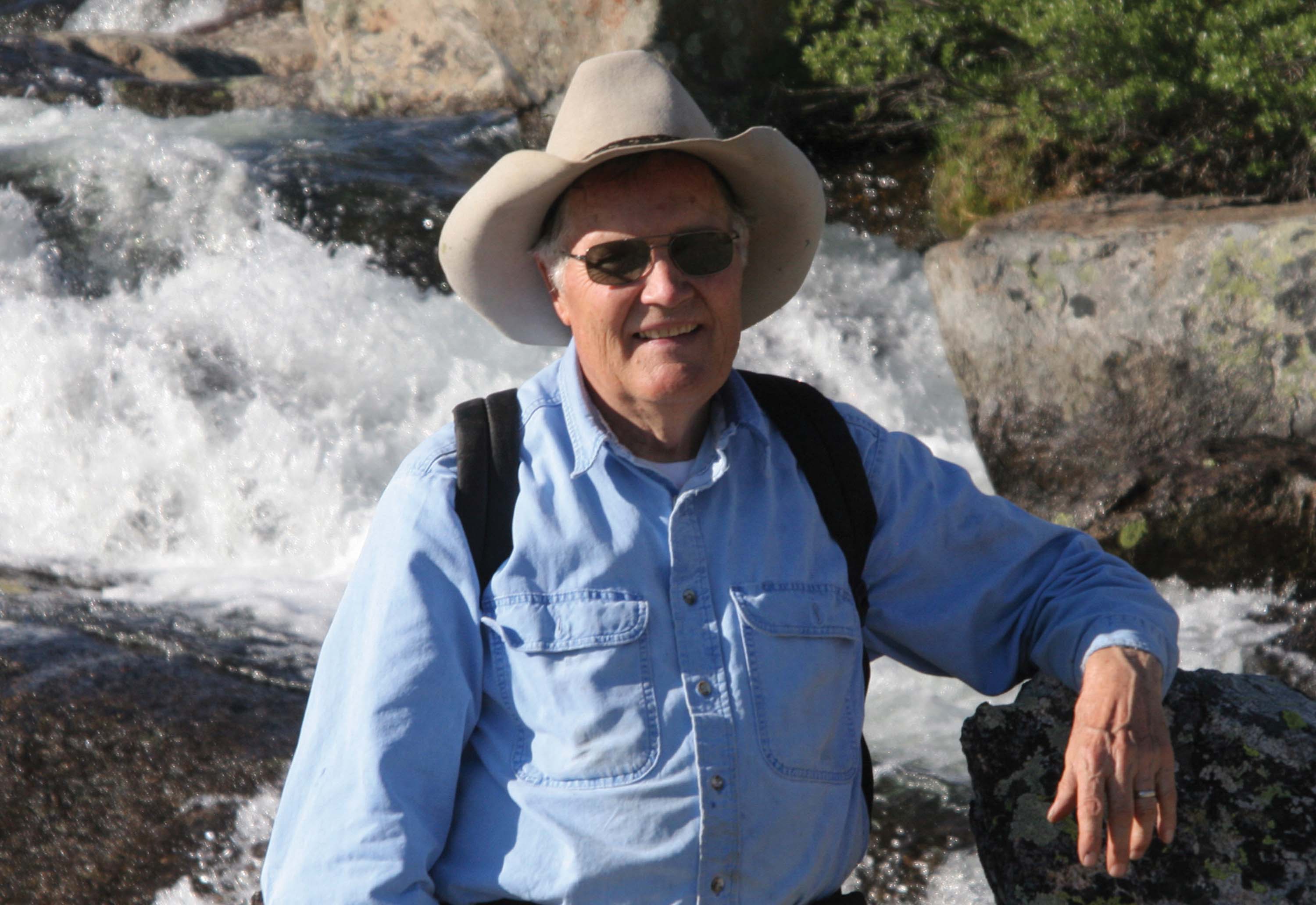