Known by his peers as a “master of the Grand Canyon,” Curt Walters didn’t arrive at that title painting just the Grand Canyon. That he has a passion for one of the world’s natural wonders is no surprise; it’s practically in his back yard. For Walters, who lives in Sedona, Arizona, where the red rock formations come to life at morning’s dawn, painting outdoors is only natural.

A native of the Southwest, Walters’ keen eye for painting light and atmosphere is obvious in his Grand Canyon pieces, but that skill is what makes his landscapes special no matter where he is painting. Take, for example, the body of work he created on a recent trip through Europe where, he says, the light was remarkably different in each place.

“In England, I never saw the sun,” he says. “There are a lot of quick changes in the atmosphere here in the Southwest … there, that doesn’t happen. It is damp and cold and so is the light.” Still he painted, finding delight in a sky where he had a chance to play with edges of clouds. At Penzance, where Gilbert & Sullivan’s comic opera, The Pirates of Penzance, was set, Walters’ head was filled with thoughts of the opera. Its most popular tune, “I Am the Very Model of a Modern Major-General,” ran though his mind. “I was having a good time, but Scotty, the local policeman, kept interrupting me with questions, wanting to know how one can capture the atmosphere so realistically.”

Traveling to Vienna from England, Walters loved seeing the sun for a change. “I found the light to be refreshing after England. There wasn’t a lot of play in the sky, just a little atmosphere, but not by the coast. I definitely added more moisture and more recession in values, but I never got to any place where I painted any depth.”

Most of all Walters loved Venice, even though, he says, the human element was a significant change from his vast and relatively unpeopled home turf. “It was difficult to find a spot to paint. Even with no automobile traffic, there are so many people walking around, it doesn’t leave any room for artists to set up.”

Determined, Walters found places to set up his French easel and paint, producing two paintings of the famous La Salute, one of the largest cathedrals in the floating city. He also painted nocturnal scenes in Venice, a challenge because of the economy. “They changed the kind of lights they are lighting the cathedrals with at night,” he says. “Once they used warm lights, now they use soft blue lights to save money. That changes everything. Still, you have to see Venice by night.”

In Seville, Spain, where the light was high, Walters had to obtain special permission to paint at the beautiful house and museum, Casa de Pilatos. Having to prove himself to be a professional artist with a presentation of his website, Walters eventually earned the curator’s permission and, thanks to numerous awards, his regard, as well.

Chuck Schroeder, President of the National Cowboy and Western Heritage Museum, marvels at the artist’s list of awards. “He won the coveted Prix de West Purchase Award in 2007, and has since been awarded the Nona Jean Hulsey People’s Choice Award four times and the Frederic Remington Award twice in his 15 years as a Prix de West artist!” he says.

Schroeder points out that not every award was a Grand Canyon painting. “His work, regardless of subject matter, reaches its viewers. While he is, perhaps, best known for his dramatic portrayals of the Grand Canyon, he has artfully addressed a wide variety of subjects with equal proficiency. Views of mountains and deserts, seascapes and lakesides, European cities and street scenes, inspiring internal and external views of great cathedrals and intimate old missions, even still lifes all spark a fuse from his heart to his hands, resulting in the art that ultimately touches others so profoundly,” Schroeder says. Walters will participate in this year’s Prix de West on June 7 and 8.

Demonstrating his ability to paint various landscapes, Walters currently has on his easel a long horizontal canvas, 42 x 90 inches, with a painting of Niagara Falls, a rainbow reflected in the mist of its waters. His admiration of one of Frederic Church’s paintings of Niagara Falls inspired him to paint it in the same dimensions as the deceased master. The panoramic piece, along with images from Arizona and his European tour, will be shown at Nedra Matteucci Galleries in Santa Fe beginning June 22 in a show titled, Curt Walters: Works from My Wishlist.

Matteucci says it is exciting to represent an artist with the distinction and dedication of Curt Walters. “He has already achieved coveted awards and recognition, yet Curt continues to push himself in search of broad subject matter and artistic innovation,” she says. “I look forward to every new painting and sharing it with our collectors because I expect to discover somewhere new and beautiful as Curt journeys further away from his beloved Arizona. He raises the bar and expectations and we are repeatedly rewarded with a growing repertoire of his beautifully dramatic and unique vistas.”

From the water lilies of Giverny to the Indian ruins at Mesa Verde, Walters’ paintings — including his Grand Canyon winners — have staying power in the memories of those who have admired them. Matteucci concludes, “I am reassured that the long tradition of great American land-scape painters is alive and well in Curt Walters.” 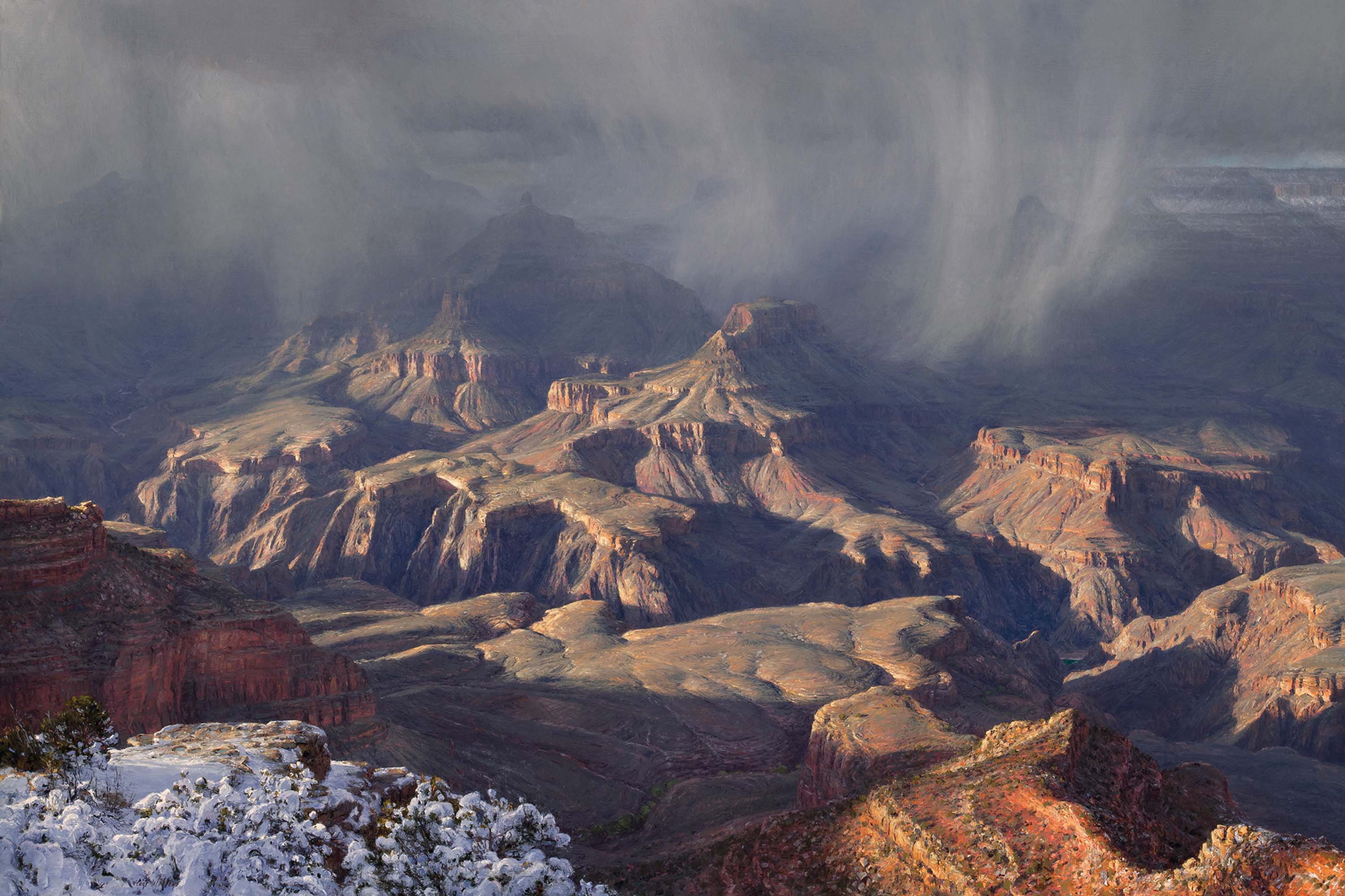 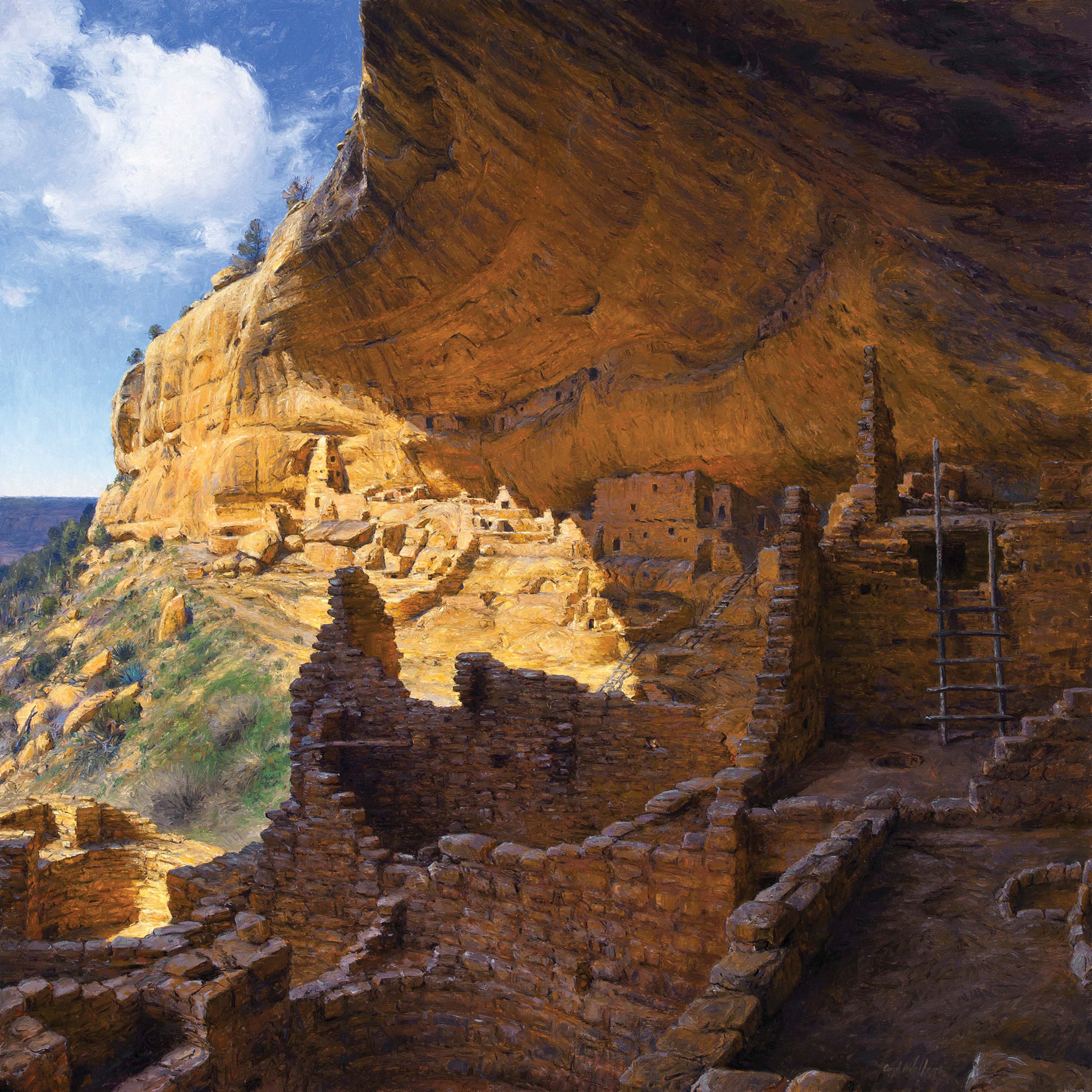 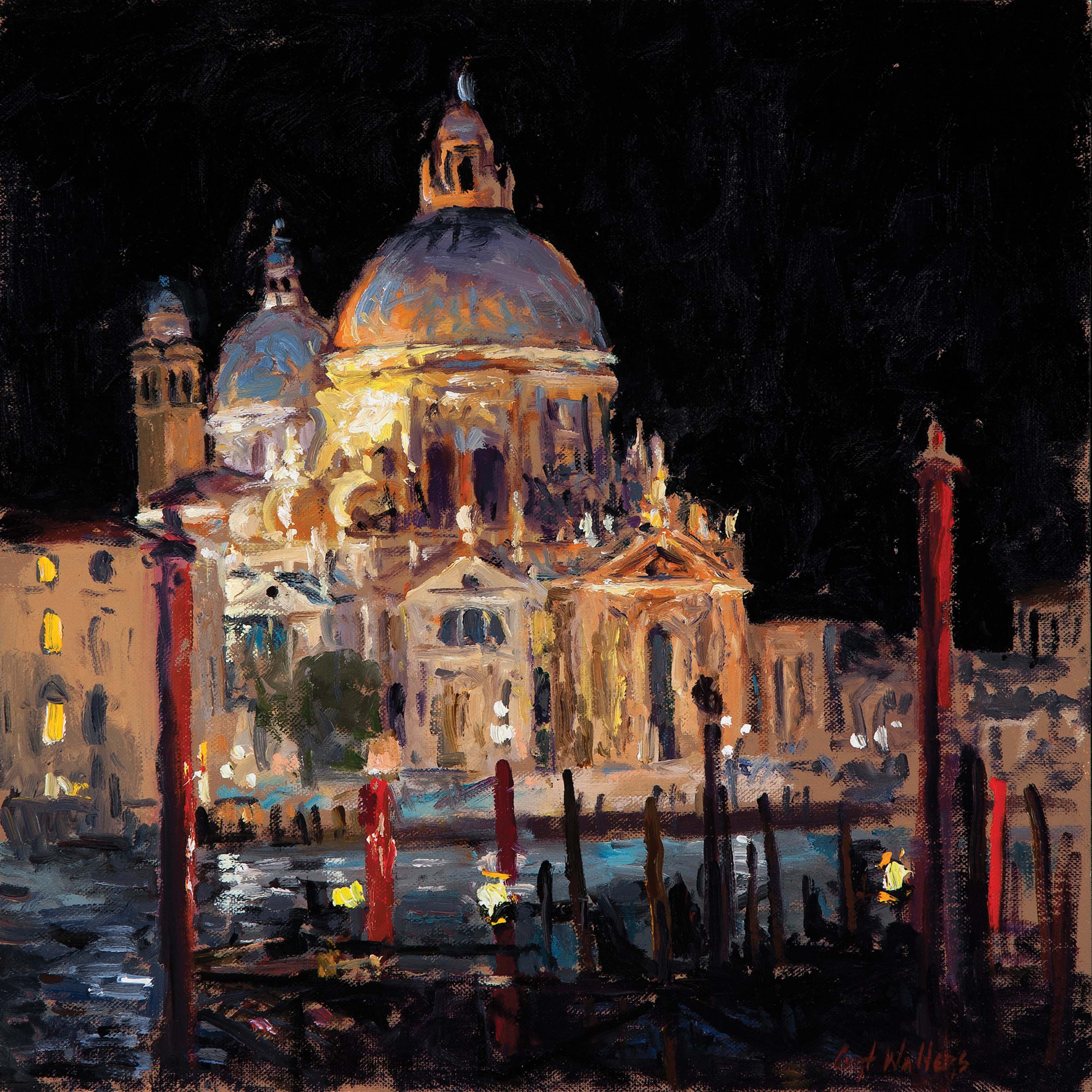 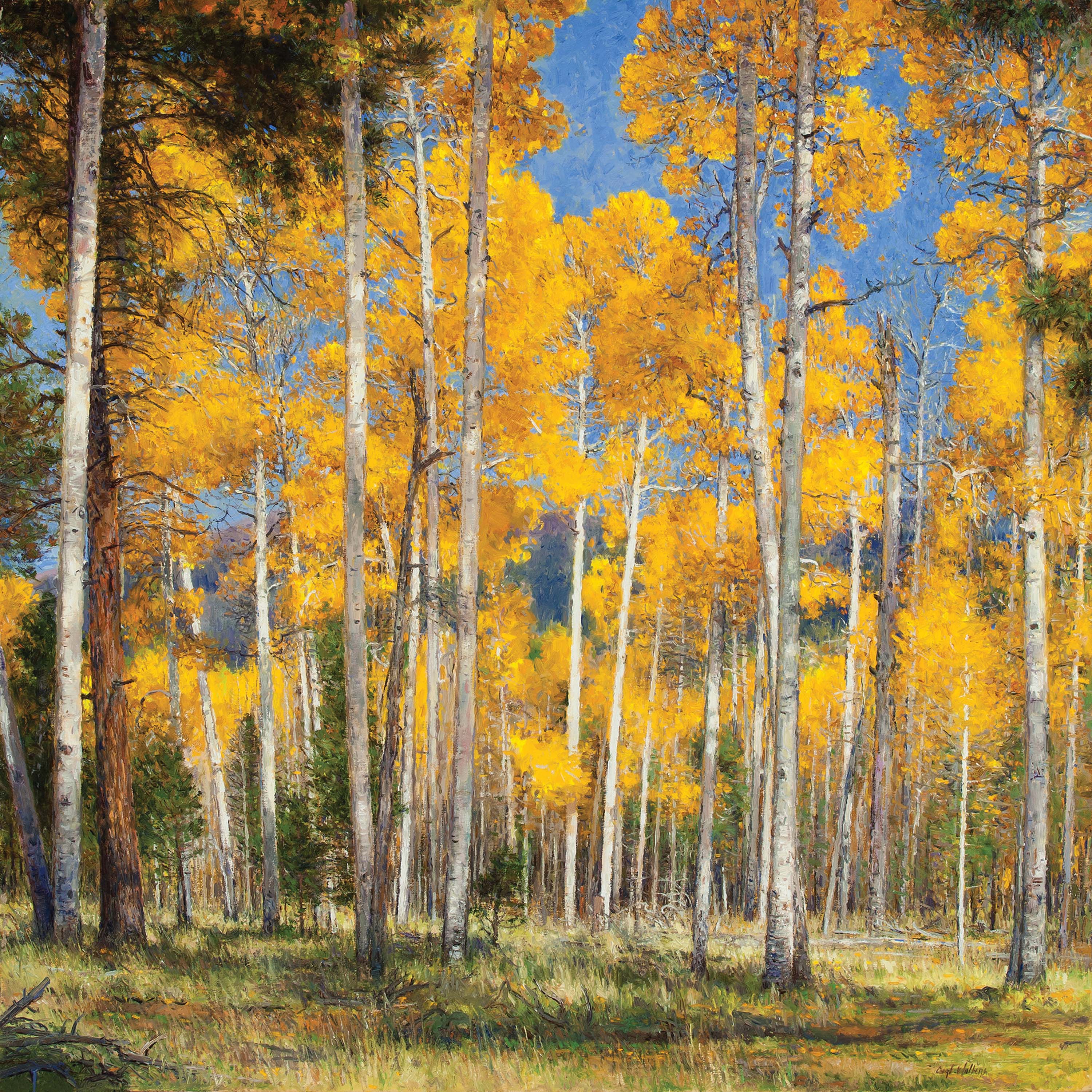 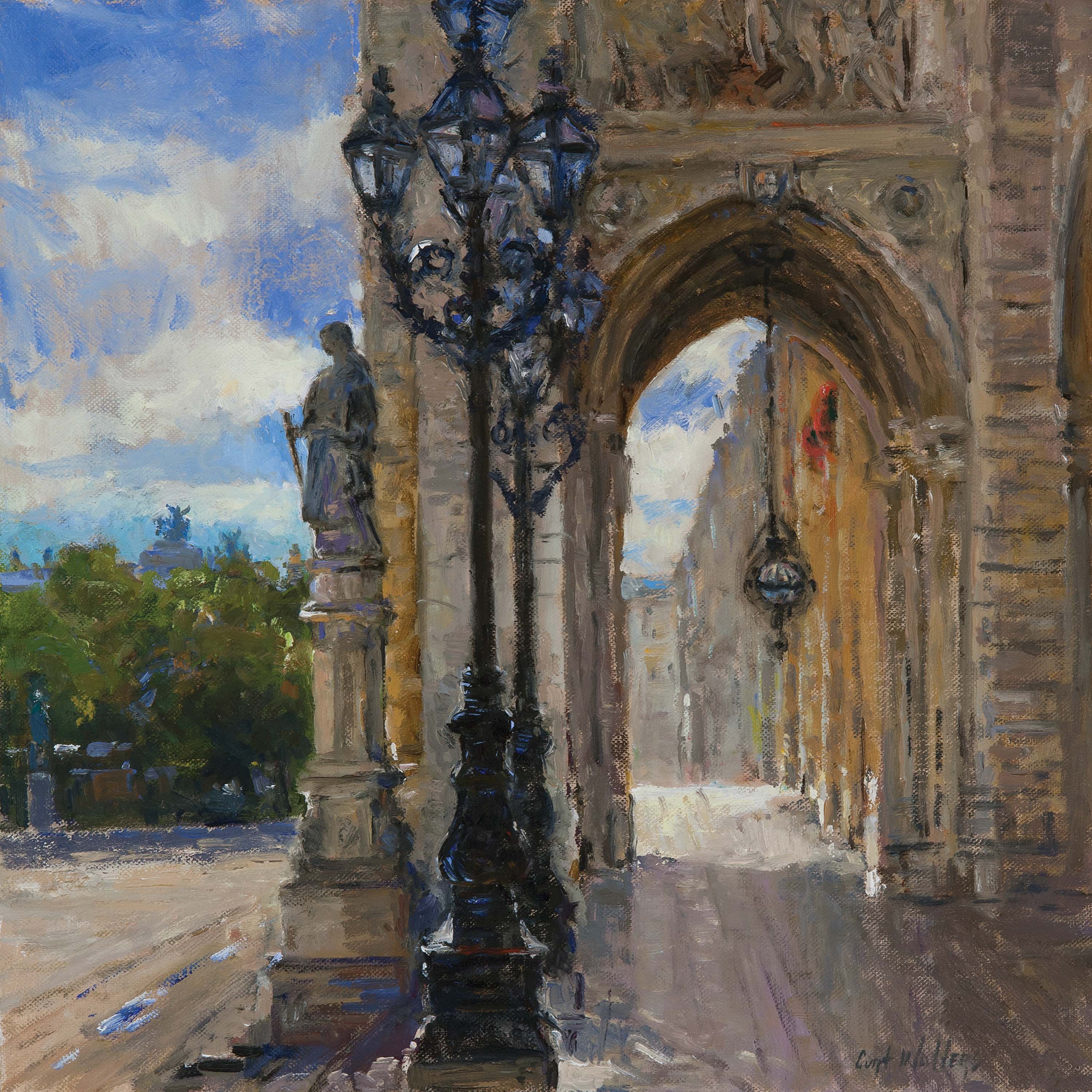 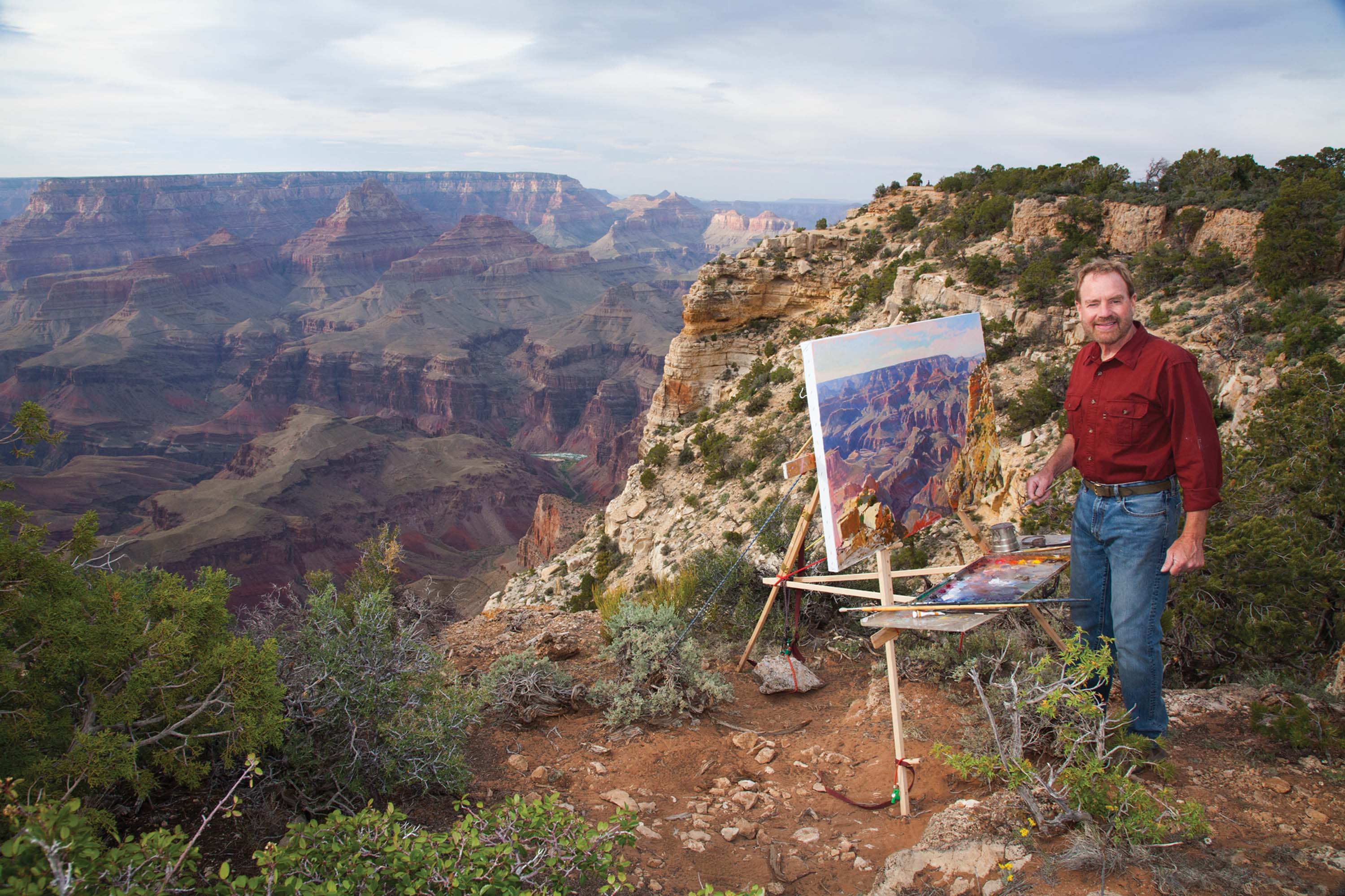 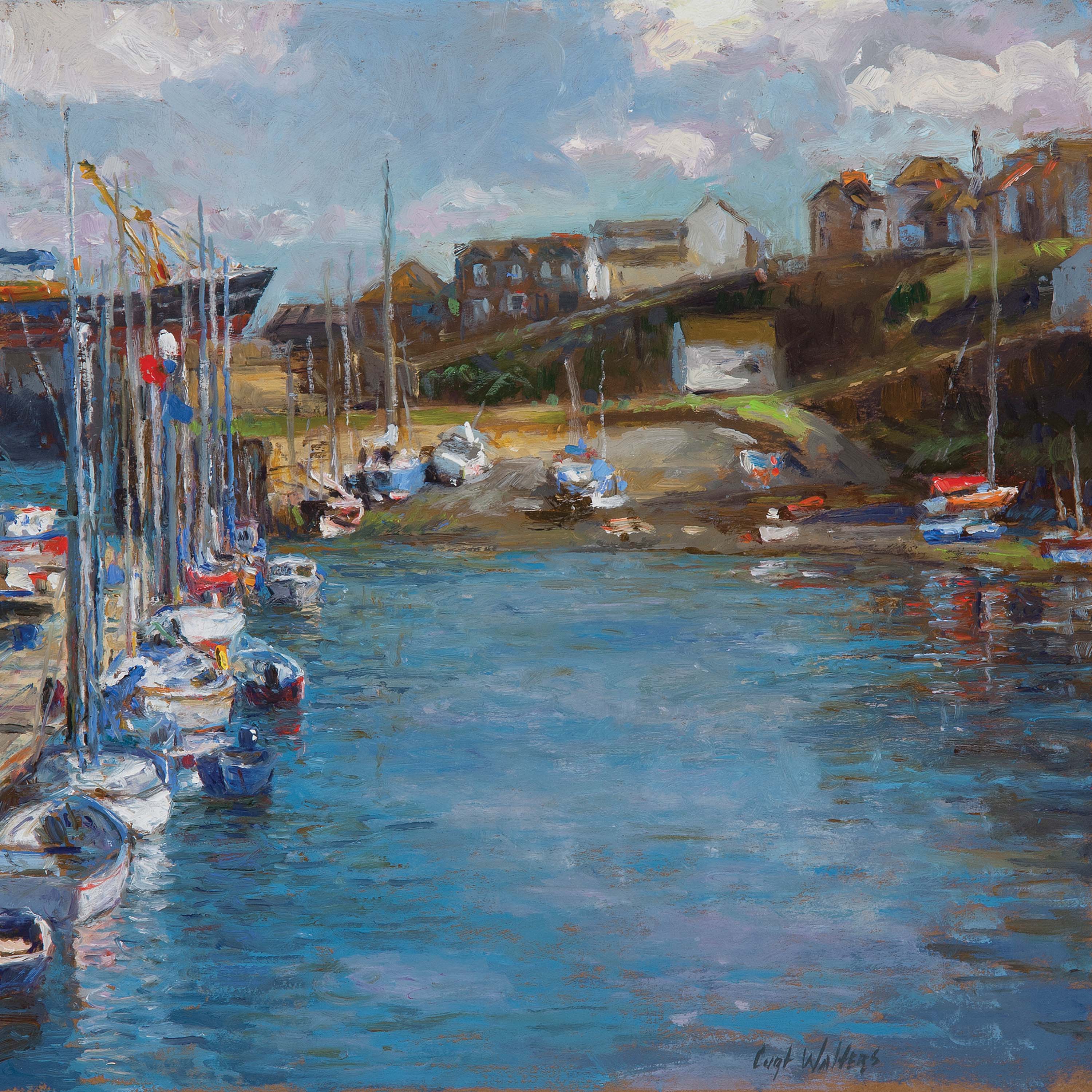