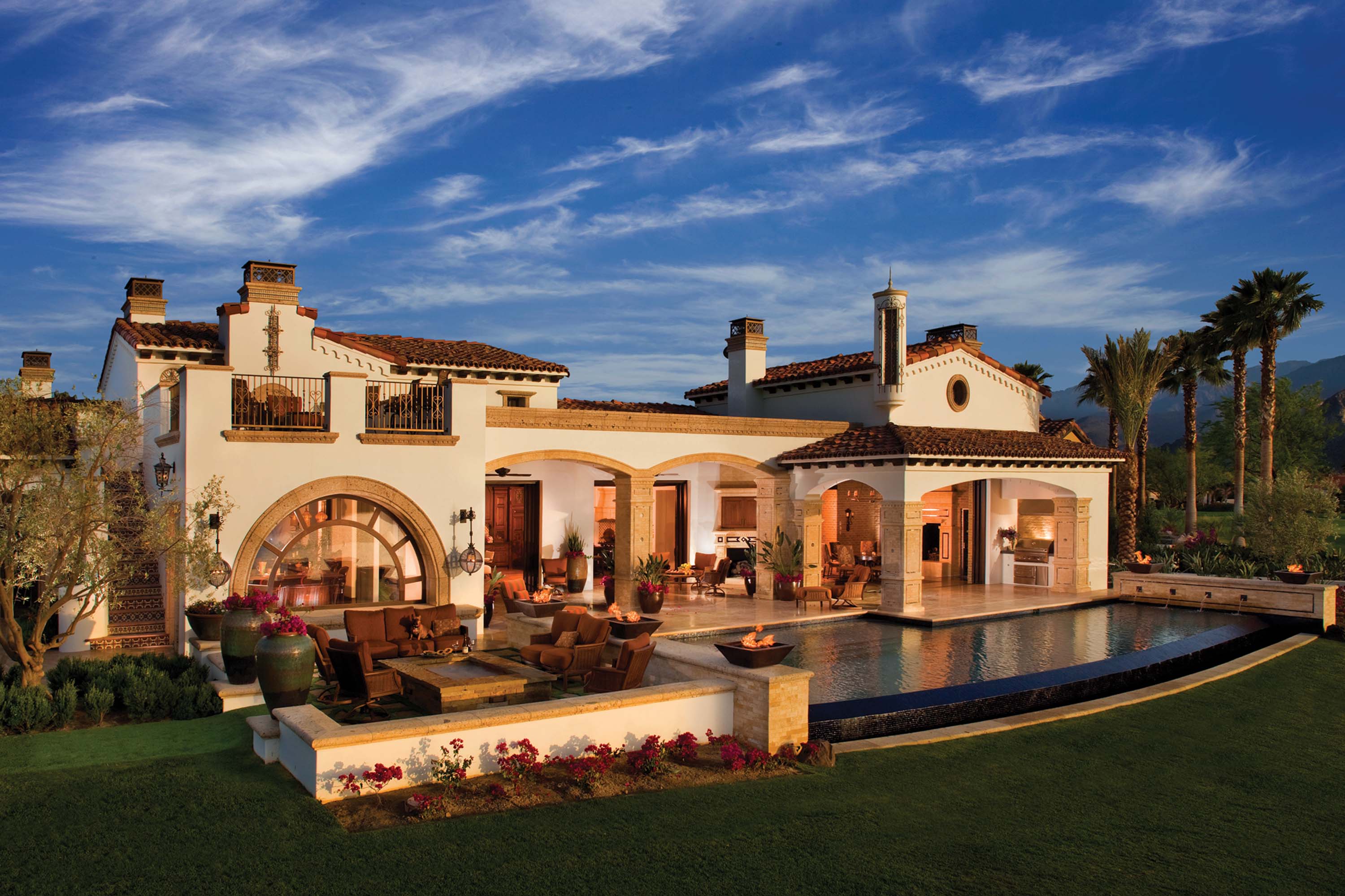 The pie shape of this lot allowed expansive outdoor living areas in the back, replete with a sky-deck, views of three fairways and the luminous Santa Rosa Mountains. Inset: Decorative, wrought-iron embellishments adorn the exterior, waking up the plain white stucco and bringing the Spanish element to full flush.

In the town of La Quinta, California, 25 miles east of Palm Springs, people build homes that can stand up to the surroundings — miles of uninterrupted horizon, dry, craggy mountains and a vast blue sky blanketing everything. Huge great rooms that melt into prodigious covered patios with cooling pools and views of the Coachella Valley are the norm.

When Barry and Sharon Taylor bought a .75-acre lot with a view of three fairways in the PGA West resort community, a wide-open floor plan was key to their vision. But preferences for Spanish-style architecture, a commodious bar for entertaining guests and a resortlike feel to the interior were also important. Two-and-a-half years after construction began, they had an 8,200-square-foot home, the grandness of scale of which was tempered by details deliciously evoca- tive of Old World Spain.

The pie-shaped lot, with its 250-foot back-end abut- ting the fairways, dictated much of the home’s shape, says architect Frank Stolz of South Coast Architects, Inc., and especially inspired its curved front, where a 22-foot turret is flanked on either side by graceful casitas.

“It establishes the entryway,” says Stolz of the palatial façade.

Because they entertain frequently, including big family Thanksgiving feasts, the Taylors wanted their dining room to be special. Sharon envisioned a wine cellar, cavelike feel. Stolz, pulling on 24-years of experience designing custom homes, wanted to be sure whatever they came up with would have access to the view.

“Why don’t we do the dining room walls and ceilings with tumbled brick and pocket doors,” he recalls suggesting. What he came up with was a barrel ceiling, with tumbled brick veneer from Eldorado Stone, carved cantera molding and a wine cellar that extends down to the basement room, beneath a glass floor. The result was an elegantly rustic, 17th-century European ambiance.

“It [does] create the feeling that you’re dining in a wine cellar,” says Stolz. But with two 10-foot-high pocket doors connecting it to the patio, evening desert breezes and lavender sunsets over the Santa Rosa Mountains are a bonus offering.

The high pocket doors, which span the length of the great and dining rooms, were important because they “allow a view that doesn’t interfere with how the mountains meet the sky.” Leaving the sky out of the view in the Sonoran desert, where 90 percent of the days are sunny and clear, would be like leaving stars out of the night.

With Barry giving Sharon the leeway to design and decorate their new home, she says, now that they’ve been living in it for two years, it’s everything she hoped it would be … and more. “I’m pinching myself,” she says.

When designing the Taylors’ home, Stolz drew inspiration from the glamorous Hotel Alfonso XIII in Seville, Spain, where he stayed for a period of time, immersing himself in the region’s architecture. Indeed, a few steps inside the Taylors’ front door, Alfonso-derived details pop out: The courtyard, where a sun-drenched olive tree grows in a planter doubling as a fountain, is bordered by five archways and a vestibule that features a fireplace and French doors leading to the guest casitas.

Cobalt-blue tile is a delicacy here — the jewel of the home, as Stolz puts it. Inlaid in clean blue rectangles and spherical balls in the fountain pedestal, the French limestone fireplaces and arched columns on the patio, the blue is like a pinch of spice that makes the dish come alive. 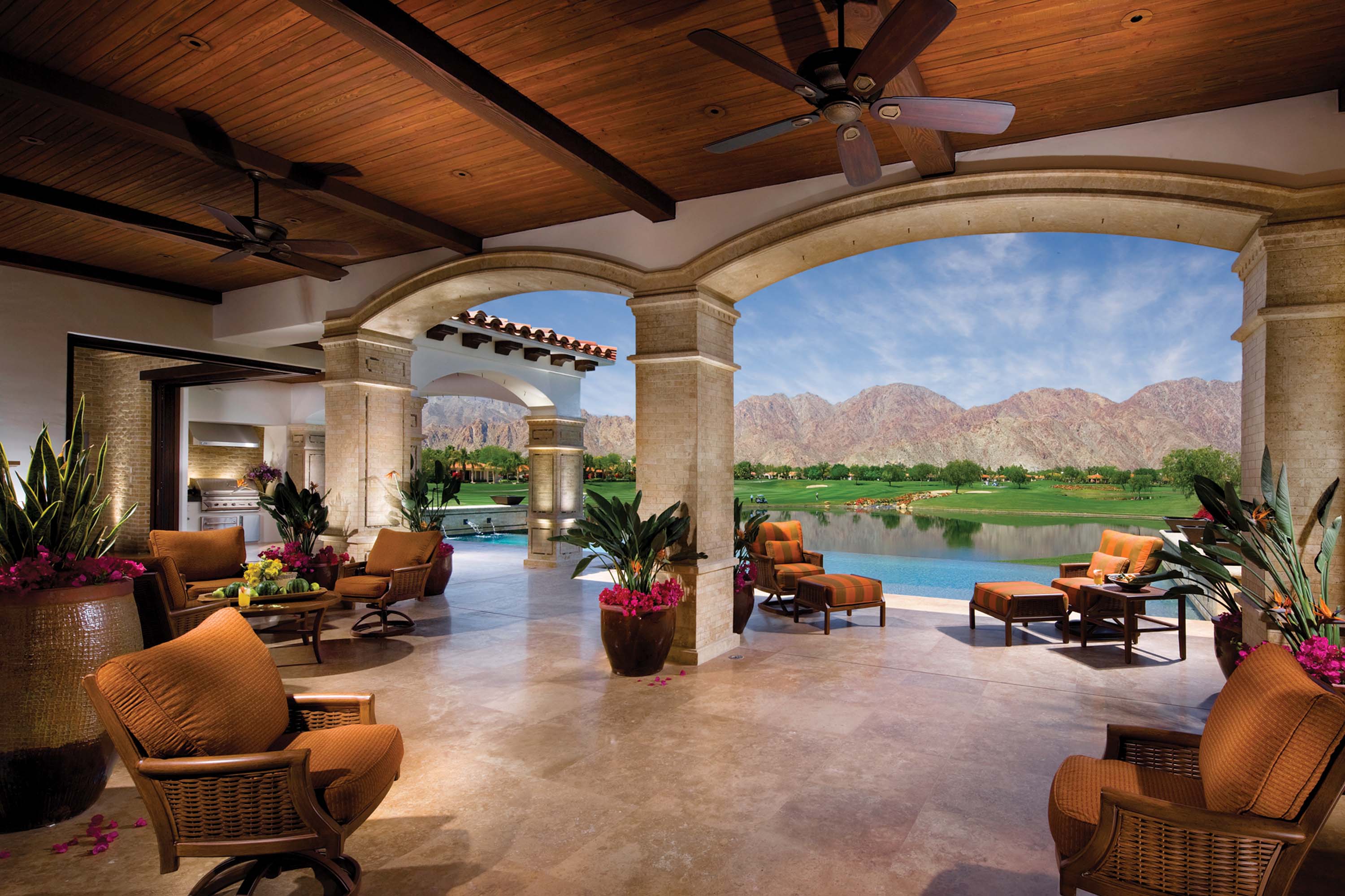 A back patio with polished travertine floors, limestone columns and cantera arches leads to an infinity edge pool that seems to flow directly into the fairway water feature. 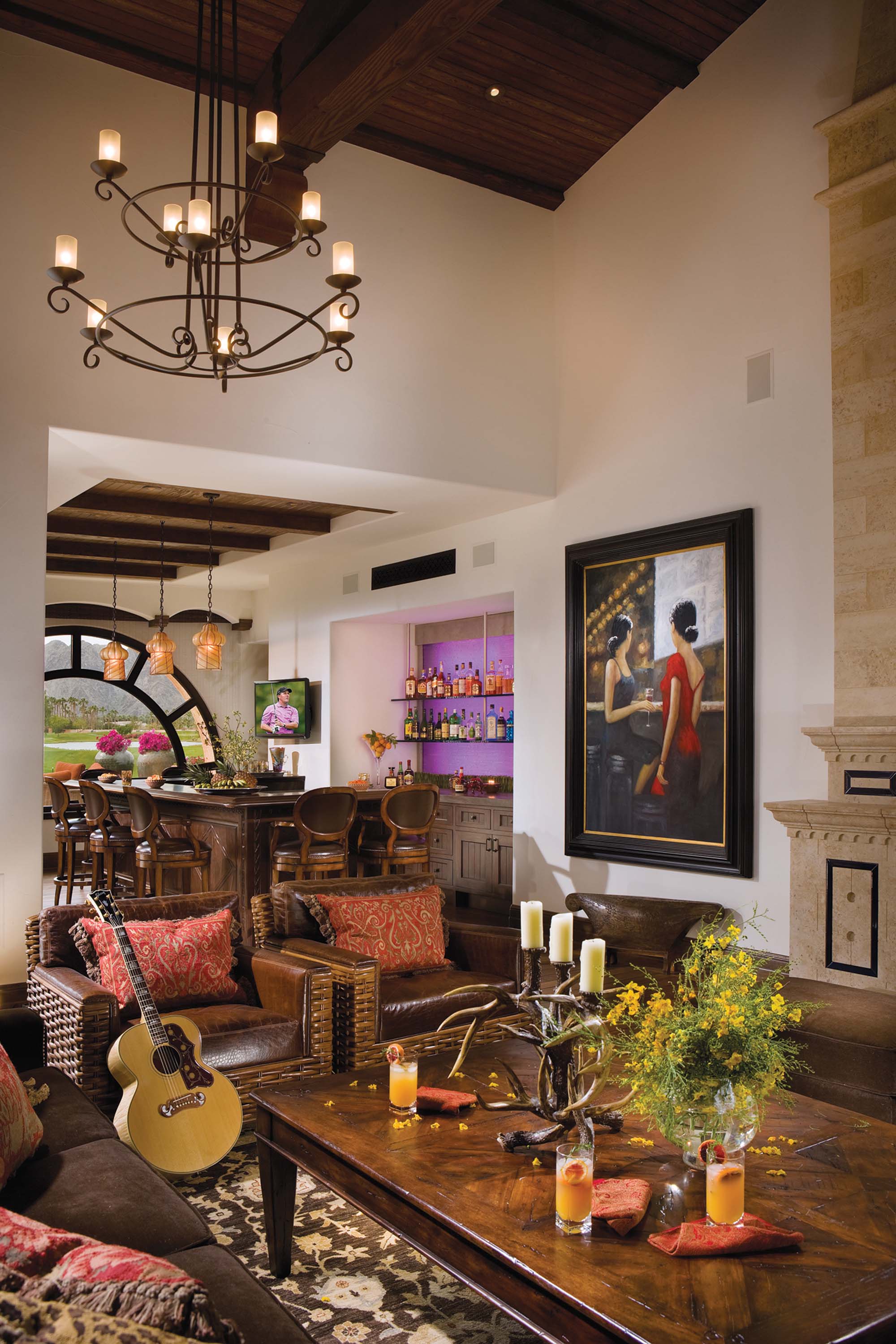 A large mahogany bar, made in France, has a color-changing back-lit fountain allowing the Taylors to indulge their love of entertaining. 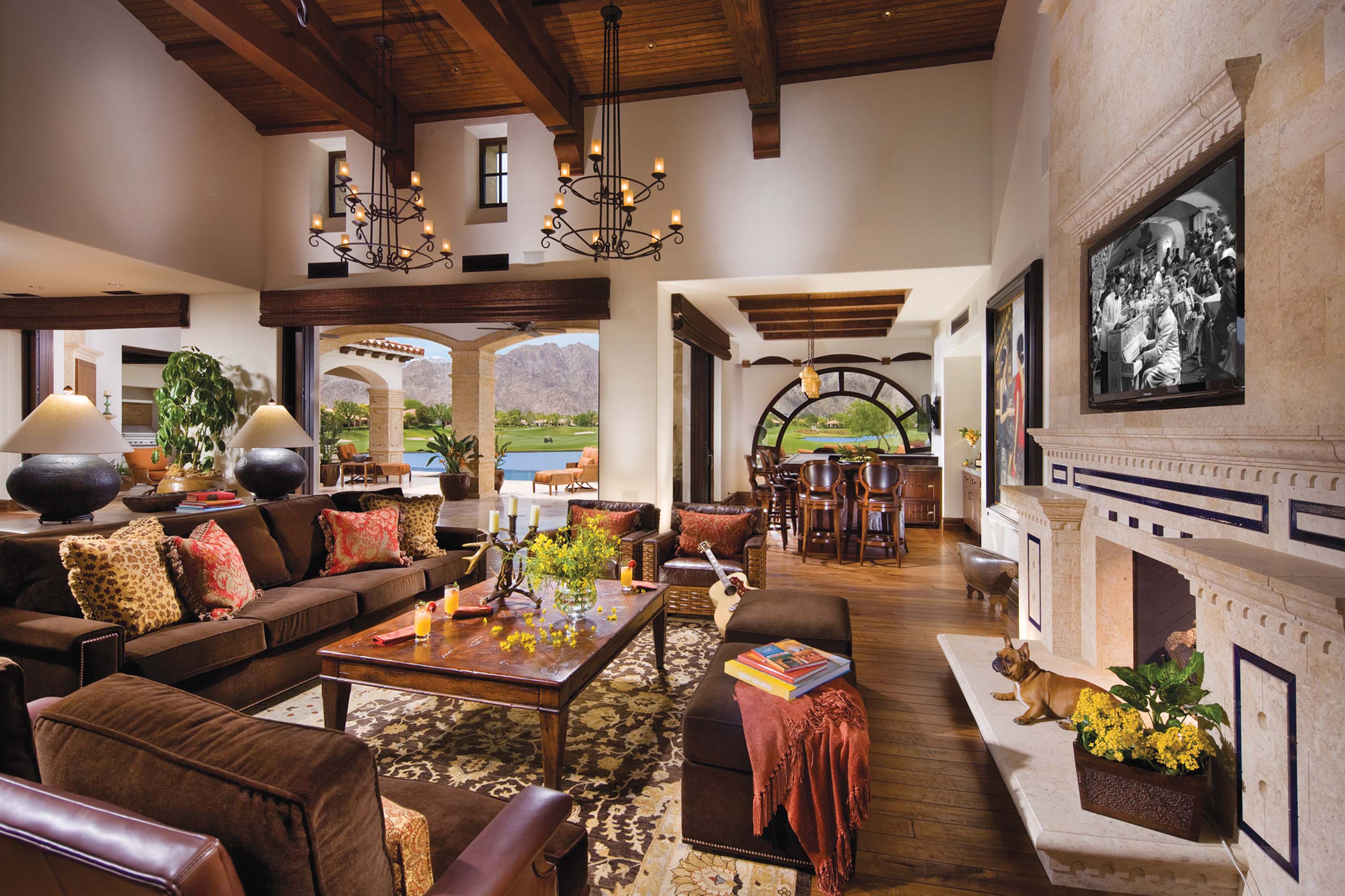 Outdoor living is the bedrock of the desert lifestyle, and wide, comfortable patios are ubiquitous.” 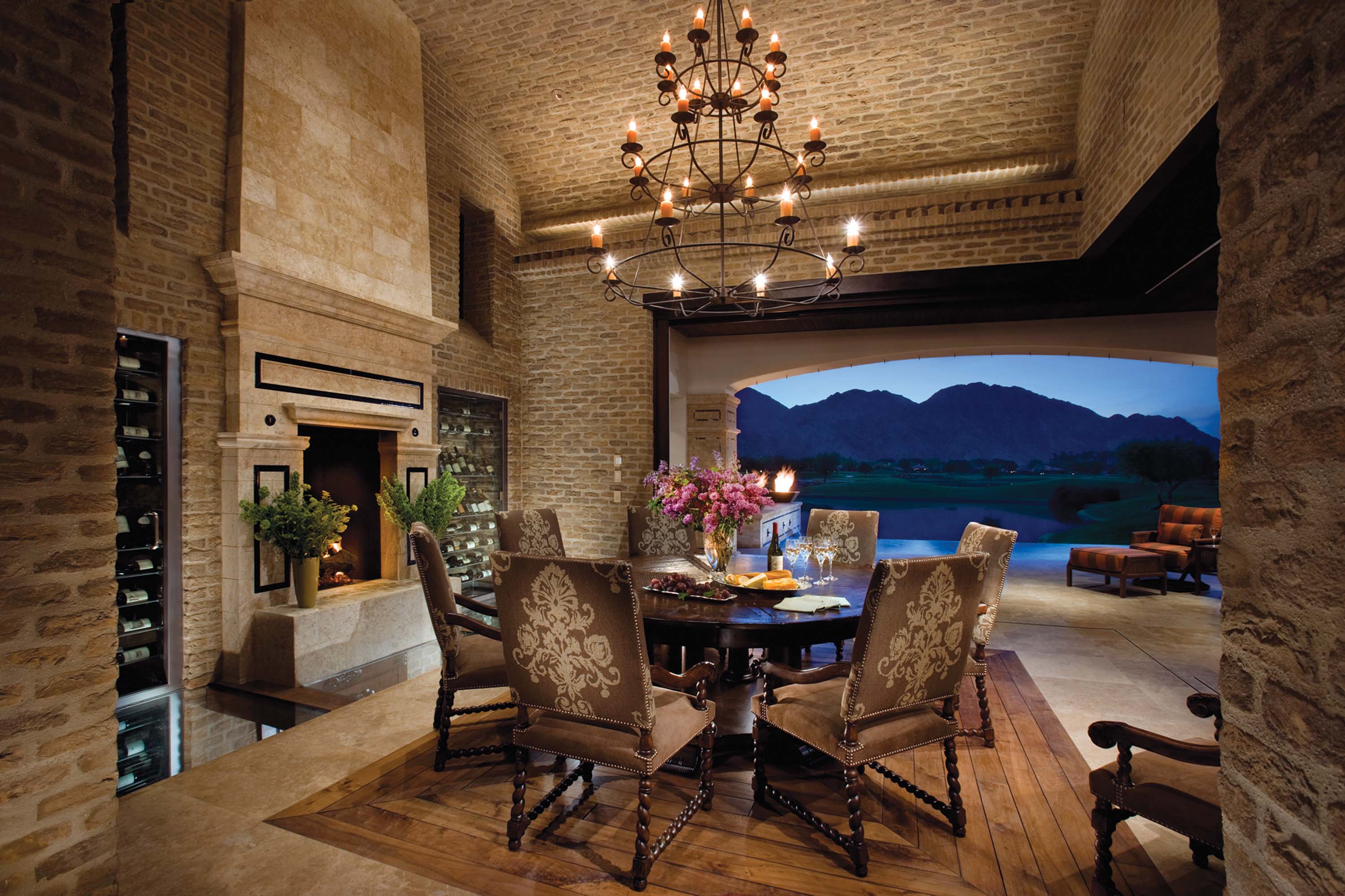 If the dining room was to have a cave-like feel, pocket doors with mountain, sky and fairway views were essential. 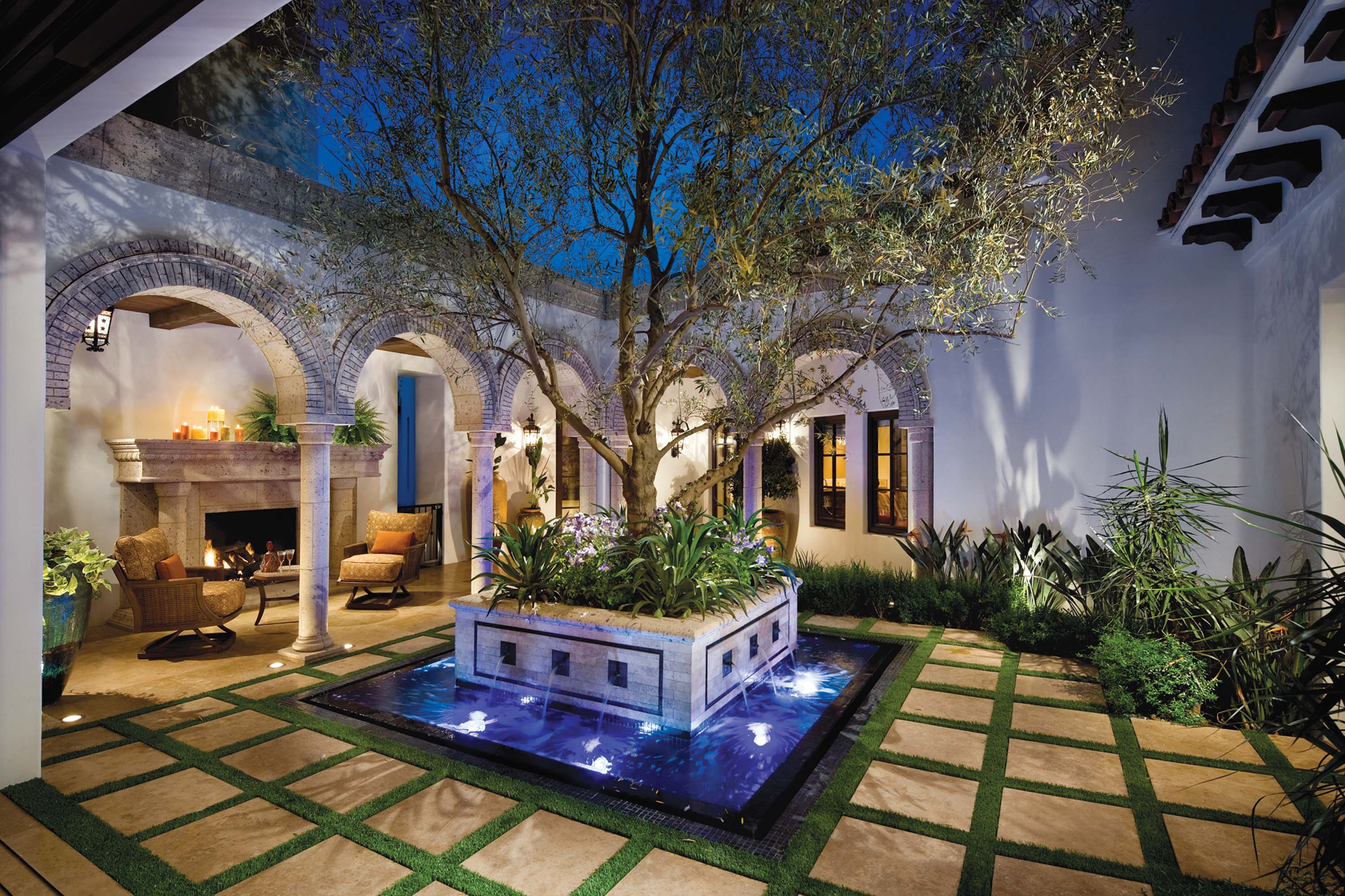 The limestone and cobalt-blue fountain shimmers at night. Wrapped in cantera carved archways, with a vestibule and sitting area, this courtyard is quintessentially Spanish style. 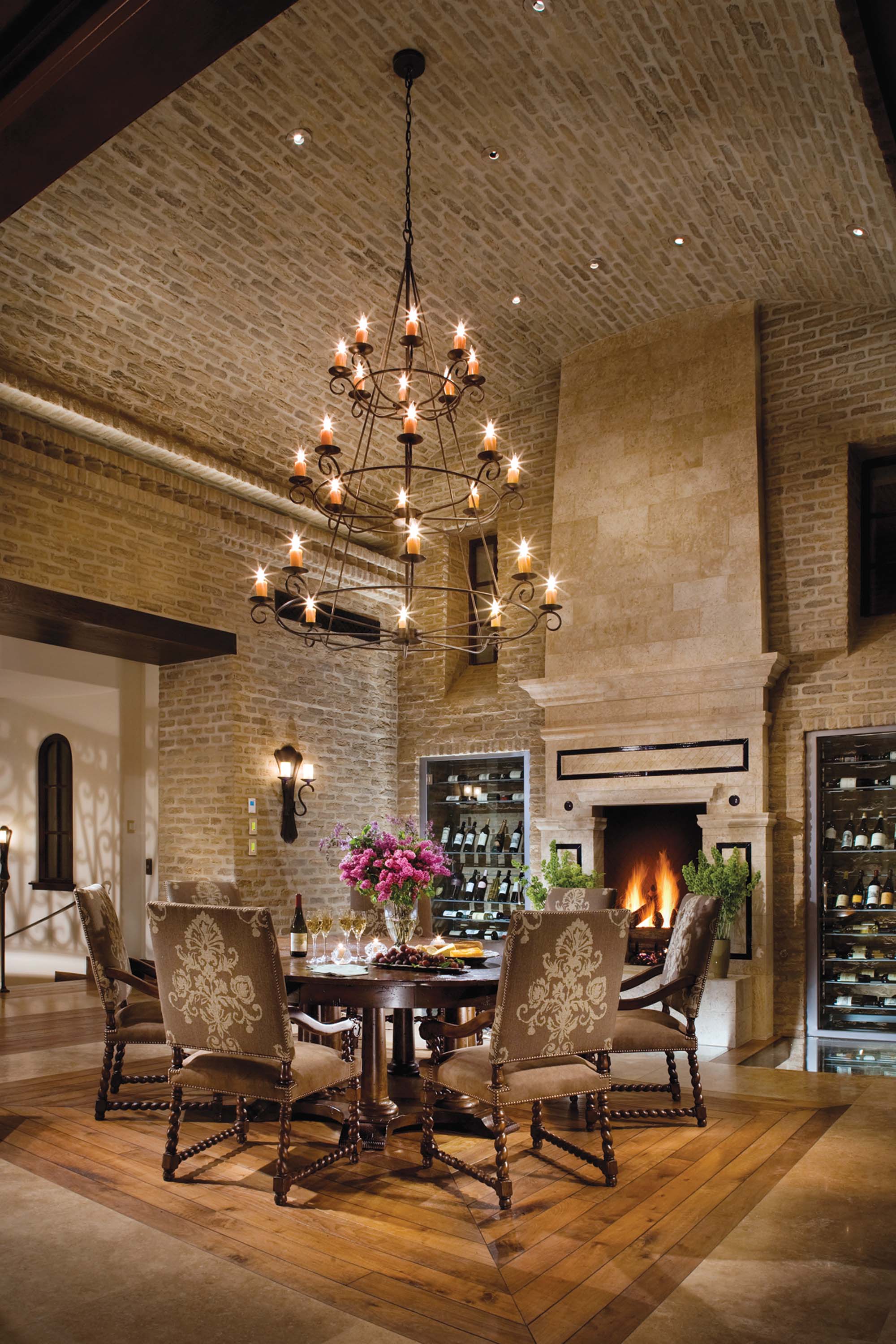 Sharon Taylor wanted a dining room with a wine-cellar feel. To pull it off, Stoltz used a tumbled-brick veneer, a barrel ceiling and put two wine cabinets that extend down to the basement, and can be viewed through a glass floor. 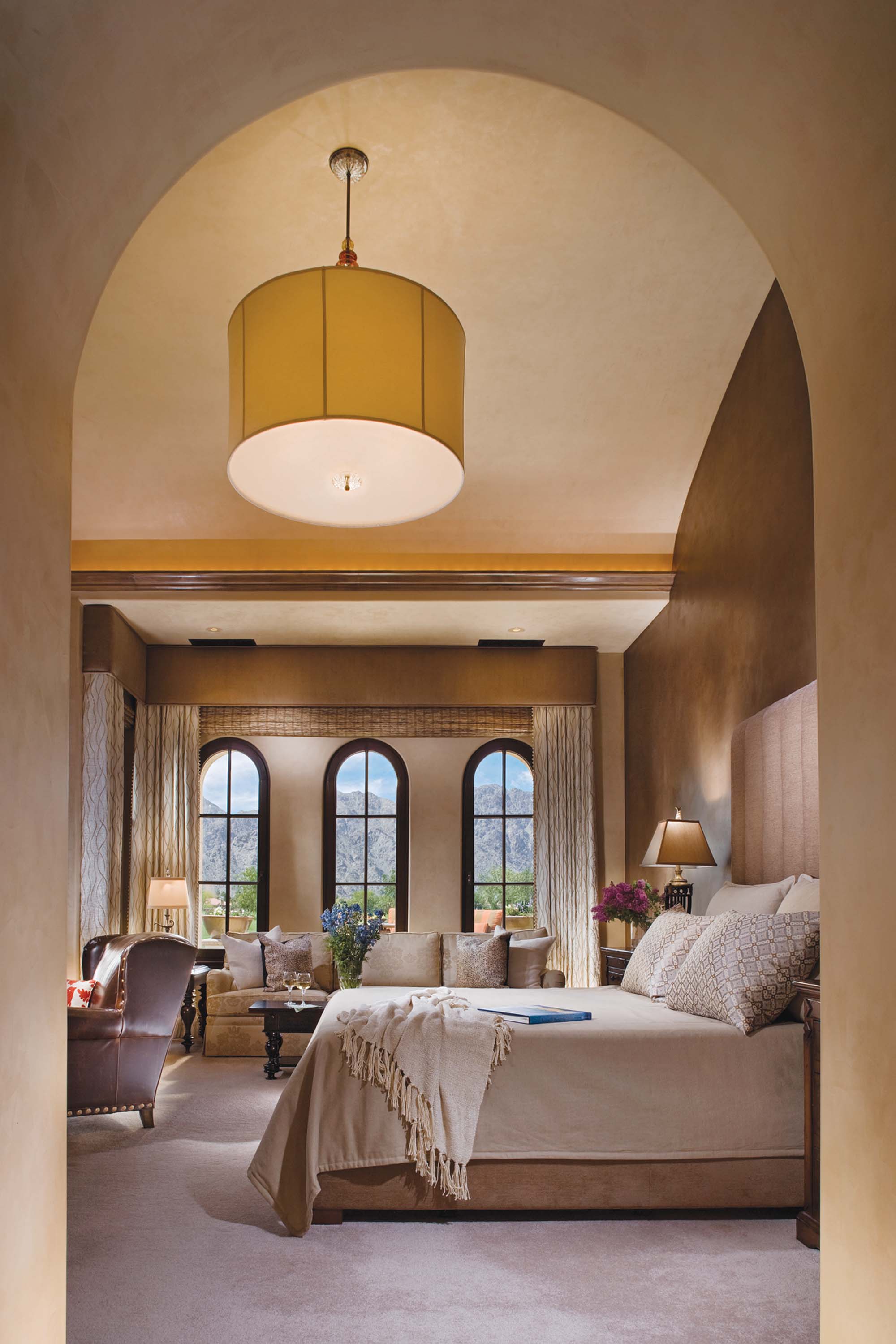 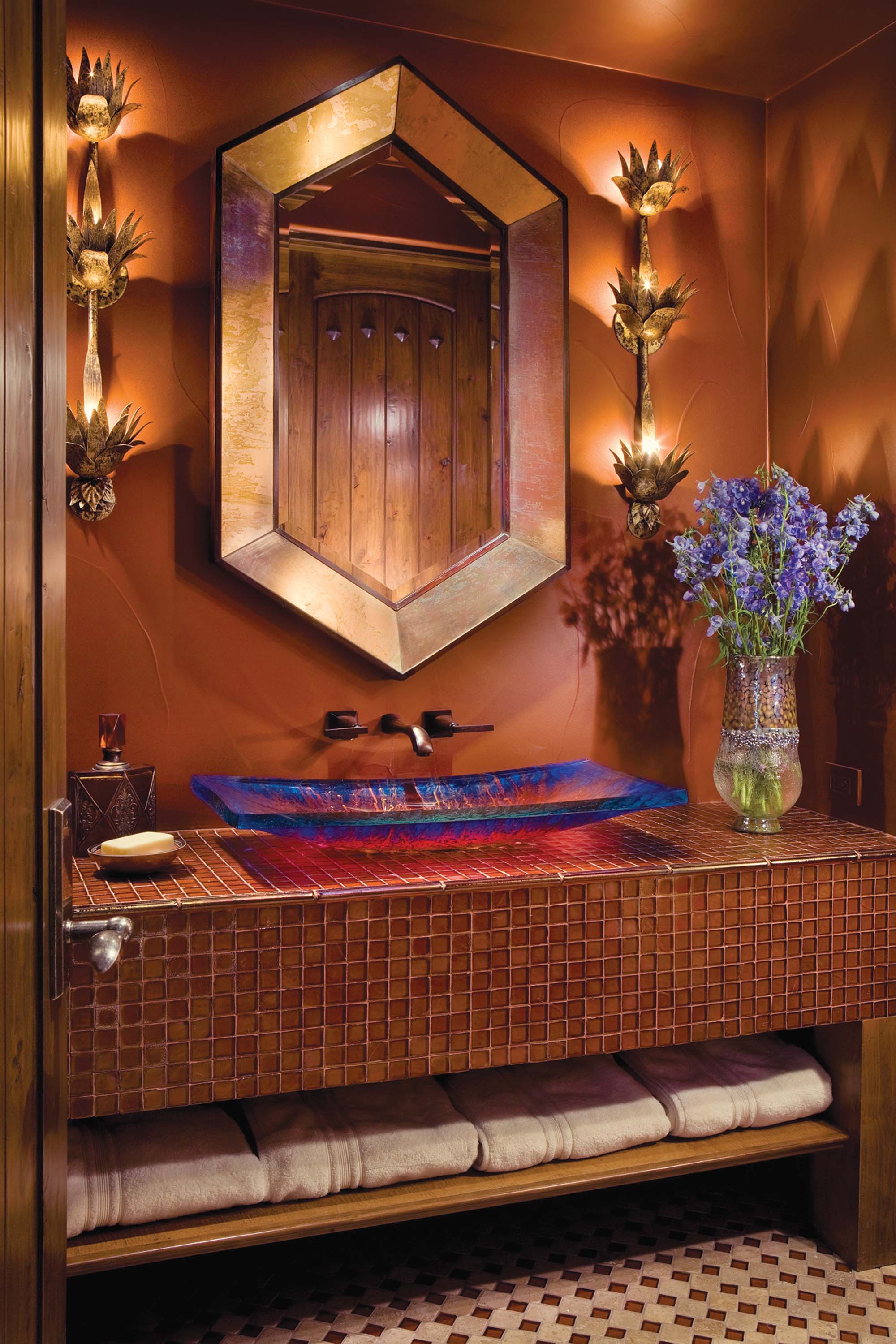 Every bathroom has its own signature. With its blue glass sink, heavy gold mirror and brass sconces, this one is a gateway to another time.