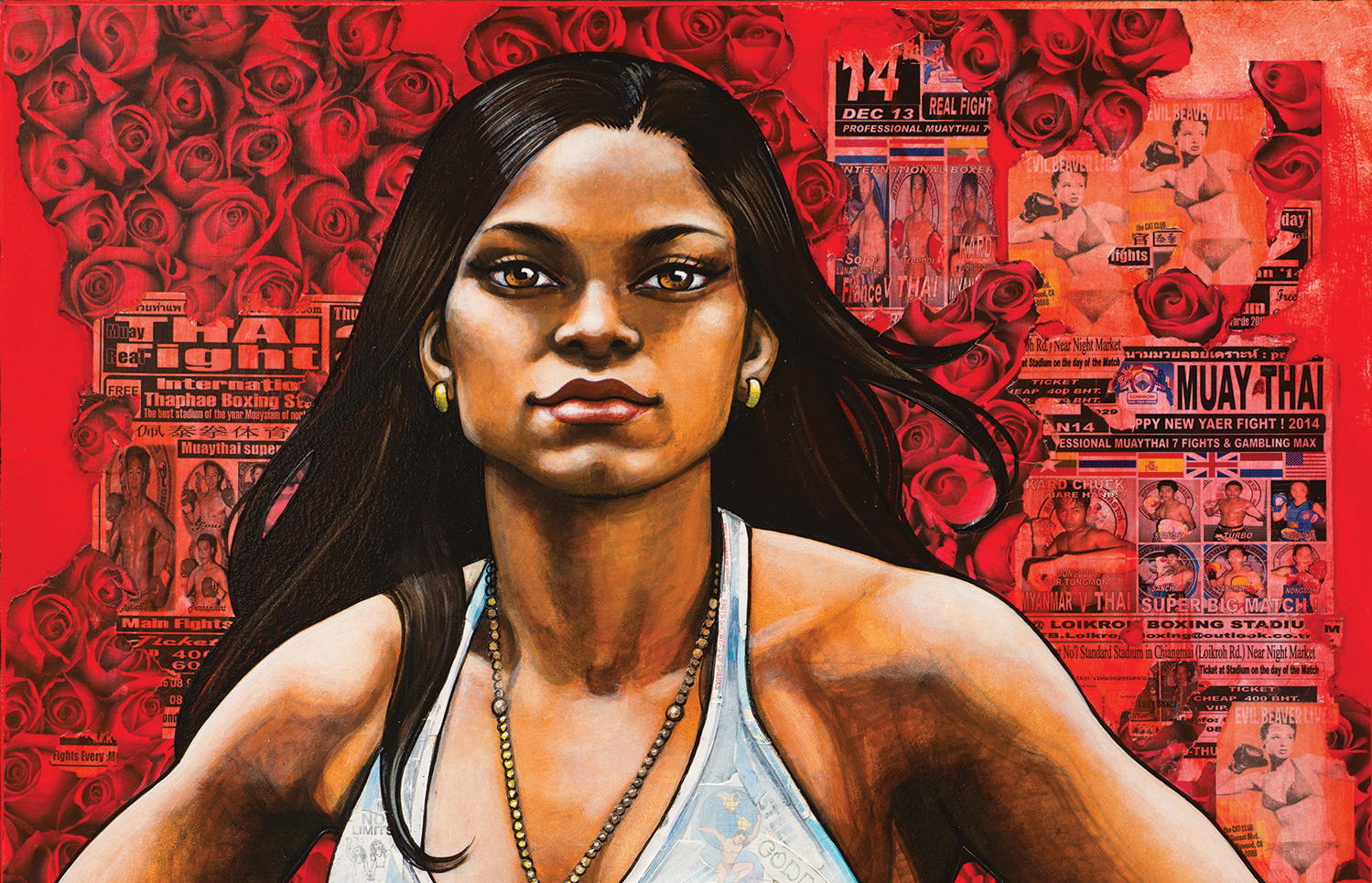 18 Sep THE ART OF JUSTICE

If, as Vincent Van Gogh said, there is truly nothing more artistic than to love people, Santa Fe, New Mexico, artist Erin Currier is at the pinnacle of her profession. “I’m most inspired by human beings and the human world,” she says. “One thing all my subjects share is that I admire and respect each of them for many different reasons. I could never draw or paint someone I didn’t feel that way about.”

Currier’s work blends acrylic paint with an assemblage of recycled materials. It’s informed as much by the social justice writings of Paulo Freire, Eduardo Galeano and Edward Said  and her extensive travels in the developing world, as by classical art history and technique.

“Erin’s work is an intersection of art, politics, compassion and hope,” says curator Dr. W. James Burns, who organized La Frontera, Currier’s fall 2017 solo exhibit at the University of Arizona Museum of Art in Tucson. “She lives her life the same way. She cares deeply about justice, peace, human rights, inclusion and truth, and uses her work as a vehicle to advance likeminded causes.”

Currier believes unabashedly in heroes. Not the heroes of myth or media, but everyday people who act with love and courage to make the world a bit better. Her subjects include a martial arts master from China, a curandera (healer) from Mexico, temple cleaners in Cambodia, and street vendor and activist Mohamed Bouazizi, whose self-immolation triggered the Tunisian revolution and the wider Arab Spring.

“When you see Erin’s work, it automatically makes sense,” says Leroy Garcia, who’s represented Currier for more than a decade at Blue Rain Gallery in Santa Fe. “One of the first things I saw of hers was a painting of vatos in prison. It just captured my attention, because as I looked through the body of work, she was capturing the everyday plight of man. Most of us have compassion for people in their struggle, and a lot of people are struggling. But Erin captures the beauty as well as the struggle.”

There was never any doubt that Currier would pursue an art career. “I’ve been making art pretty much all of my life,” she says. “I started drawing before I learned to walk or speak. My mom is very artistic. She was a kitchen designer for many years and a draftswoman. She also created oil landscapes and pen-and-ink architectural drawings, so she pretty much taught me every medium as a child. We’d paint together and do collage and sculpt.

“I went to school for theater and costume design, but by my last year of university, I was just painting and drawing all the time. I knew that was really where my love and passion lay.” 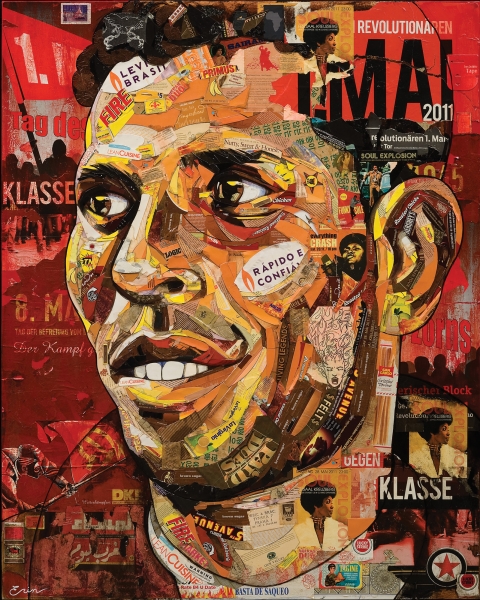 After graduating from the College of Santa Fe, Currier was working as a waitress and barista in Taos, New Mexico,  when she had a revelation. “I was struck by how much we threw away every day,” she says, “how many cups and tea wrappers and packaging. So, I started collecting that during my shift and bringing it back to my studio every day, and I made my first series of work out of trash.”

At the time, she was studying Tibetan thangka painting and those early works depicted Buddhist deities, including a Buddha, a Green Tara and a White Tara. “That grew into additional spiritual iconography,” Currier says, “including a black Madonna and even some Sufi imagery.”

A solo show at the coffee shop followed in 1998, and people responded to her work. “That was where I began to realize that maybe it was possible to do my art full time,” she says. Gallery representation at Tops Gallery in Malibu, California, and Parks Gallery in Taos followed, and that was the true beginning of her art career. “I’ve been so fortunate to have great gallerists,” she says. “That’s been a big part of my career.”

In a series titled Liberation, she painted Robert “Bob” Moses as the Medicine Buddha, Angela Davis as Green Tara, and Septima Clark — who taught thousands of people to read and write so they could vote — as the Goddess of Wisdom.

As her work began to sell more broadly, Currier started to travel. She took her first big trip in 2000 to China, Thailand, Nepal, India, Spain and Italy. “That’s when my work really changed, because I saw that the Civil Rights Movement was not unique to the U.S., that there was a similar struggle for human rights all over the world,” she says. “I was pretty blown away to discover there were thousands of people who were willing to risk their lives so that others could have equality and education and human dignity. They don’t have streets or churches or schools or holidays named after them, but I felt they were deserving of a portrait. That’s when my work became more sociopolitical and more international.”

To date, Currier has visited some 50 countries — always taking sketch pads and travel journals from which she will create larger pieces later — and that experience has strengthened her belief in humanity. “I think many of the divisions we think of between people are artificial and imposed,” she says. “So, I’m trying with my work, to break through the distinctions made by governments and religions — the distinctions made from above — that try to divide us. Because my experience in traveling is the opposite. We have far more in common than we’re conditioned to believe.” 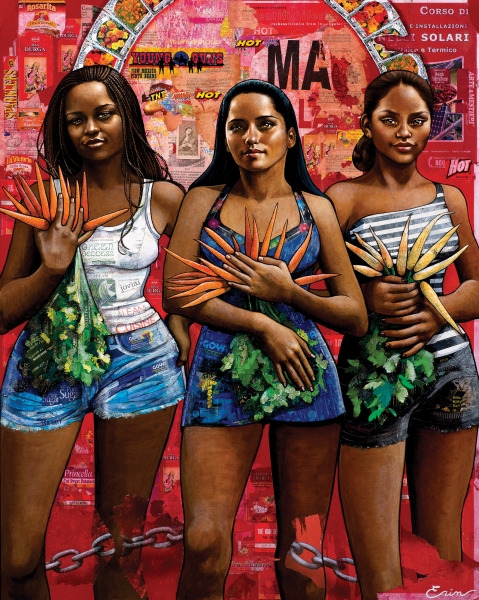 While traveling, Currier immerses herself in the daily life of the communities and countries she visits — studying the language, riding local buses and trains, making friends and learning to cook local dishes. She also collects “post-consumer waste” and ephemera from the streets and ships it home to her studio. These found objects will end up in every one of her paintings.

Incorporating recycled materials resonates with Currier on several levels. “First,” she says, “I believe that artists have always used materials close-at-hand. I am no exception. I use what is most readily available, prevalent and ubiquitous to my era — discarded packaging and product waste from our globalized consumer culture.

“Secondly, my use of trash is a spiritual practice in the sense that the discarded waste is transfigured, hopefully, into something of beauty.

“Finally, using post-consumer waste is a sociopolitical act. Not only is it a form of recycling, but also by virtue of the fact that it is written in every language and gathered from every continent, it expresses our interconnectedness and our commonalities as human beings — in what we value, share, consume and cast away.”

Currier’s studio is in her home in the South Capitol neighborhood of Santa Fe. “I’ve always worked out of my home,” she says, “because I work a lot and I love being able to work first thing in the morning or the last thing at night. I just like living with the art.

Today, Currier’s work is collected around the world by every ethnicity and every class, from billionaires to cobblers, carpenters, musicians and postal workers. She’s proud to be in a collection with artists such as Robert Rauschenberg, Andy Warhol, Henry Moore and Antoni Tàpies — but equally proud that two public school teachers felt it was more meaningful to own a piece of her art than to purchase a used car.

Editor’s Note: La Frontera is at the University of Arizona Museum of Art through January 7, 2018, and will travel to The Harwood Museum of Art in Taos from February 9 through May 13. In Santa Fe, Currier’s solo exhibition, Fight Like A Girl, opens September 15 and runs through the 30th at Blue Rain Gallery; blueraingallery.com. 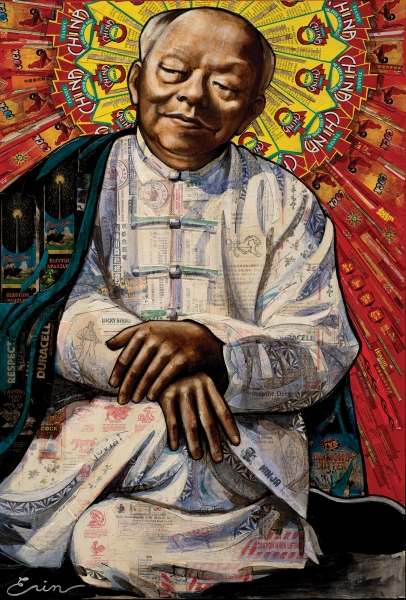