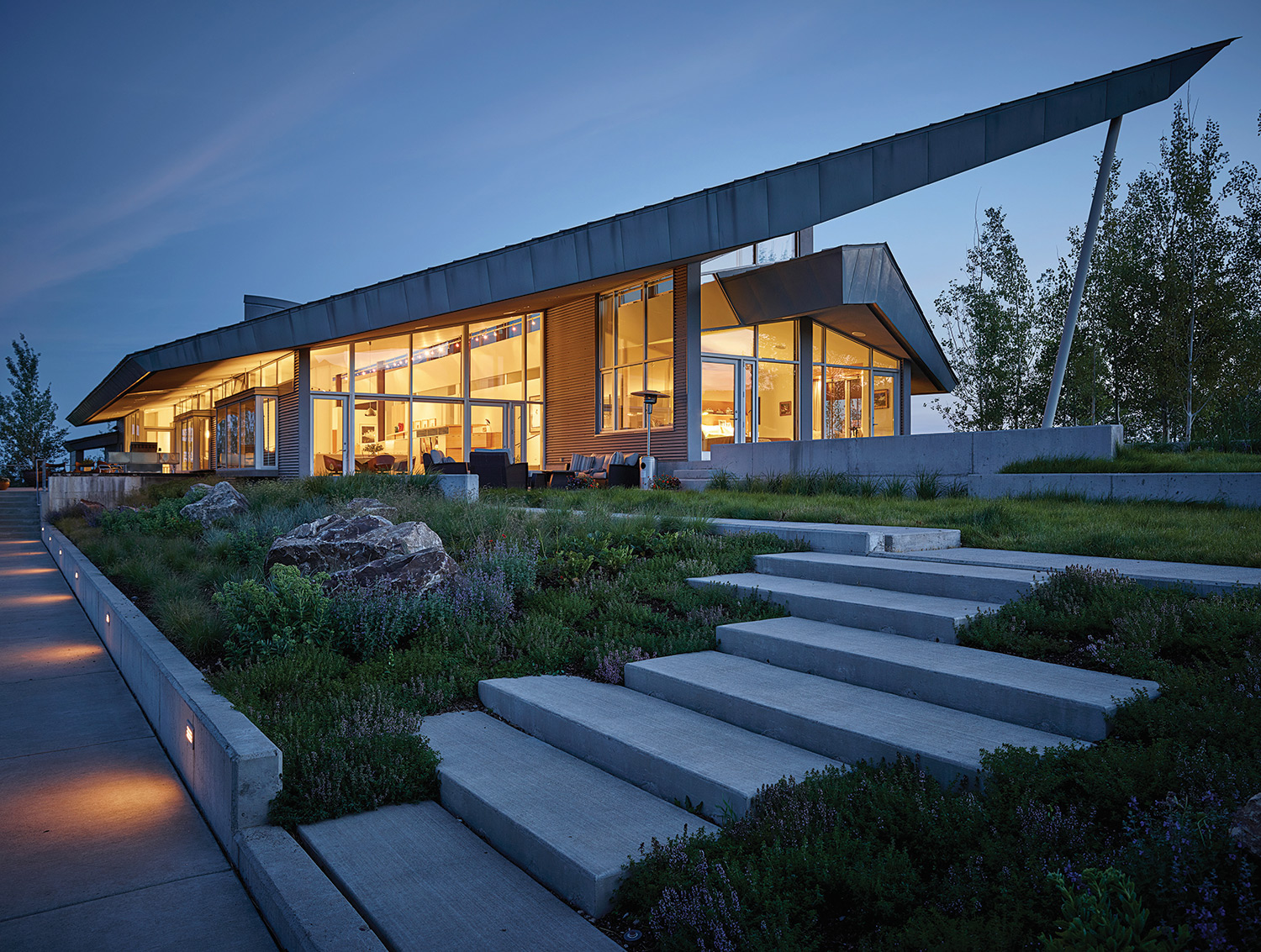 Planes of concrete slabs emerge from a landscape of native plants to establish a pathway to the residence.

ARCHITECT RICHARD KEATING IS BEST KNOWN for his skyscrapers, but he enjoys residential projects, too. “The opportunity just doesn’t present itself as often,” he says. So, when he was asked to envision a home in Alta, Wyoming, he welcomed the assignment. 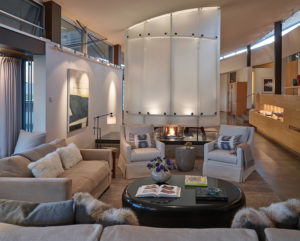 A circular fireplace beneath a wall of fiberglass panels delineates the living room and dining spaces while also providing a focal point that ties the open floorplan together. The Verellen loveseat, sofa and chairs surround a River Rock coffee table by Holly Hunt, fashioned from highly compressed laminated wood layers. Fur pillows by German designer Katrin Leuze sit on the couches. Others, crafted from Turkish hand-embroidered fabric discovered by Rush Jenkins and Klaus Baer of WRJ Design, rest on the chairs. Photos: courtesty of WRJ Design

Bordering a national park with a backdrop of majestic, snow-covered peaks against an endless cerulean sky, combined with undulant lowlands of meandering meadows, the Teton Valley offered a compelling prospect. It was an invitation to bring a touch of modern to the wonderland of wildness that is Wyoming.

With compelling views in every direction, the siting of the project was more of a practical consideration. To help make the decision, Keating flew over the 80-acre property with his associate and mentor, Bill Browning.

Once the site was selected, Keating created a modernist structure of metal, glass and concrete. Named the Murphy House, after its current owners, the house stands as a bold architectural achievement while at the same time remaining grounded by the agricultural roots that run deep through the valley. The angular roofline, a purposeful reference by Keating to the metal roofs of farm buildings, also mirrors the rugged mountain range.

“I always liked that when driving up to the house on the highway it sometimes appeared as just another metal-roofed agricultural building until you got closer,” says Keating.

Keating had designed the 6,000-square-foot residence and guesthouse in 2004 as a favor to the original owners. As successful as the project was, Keating’s vision wasn’t completely realized. “When you design a residence, you want to do everything, including the interiors,” he says. But the original homeowners had another direction in mind. 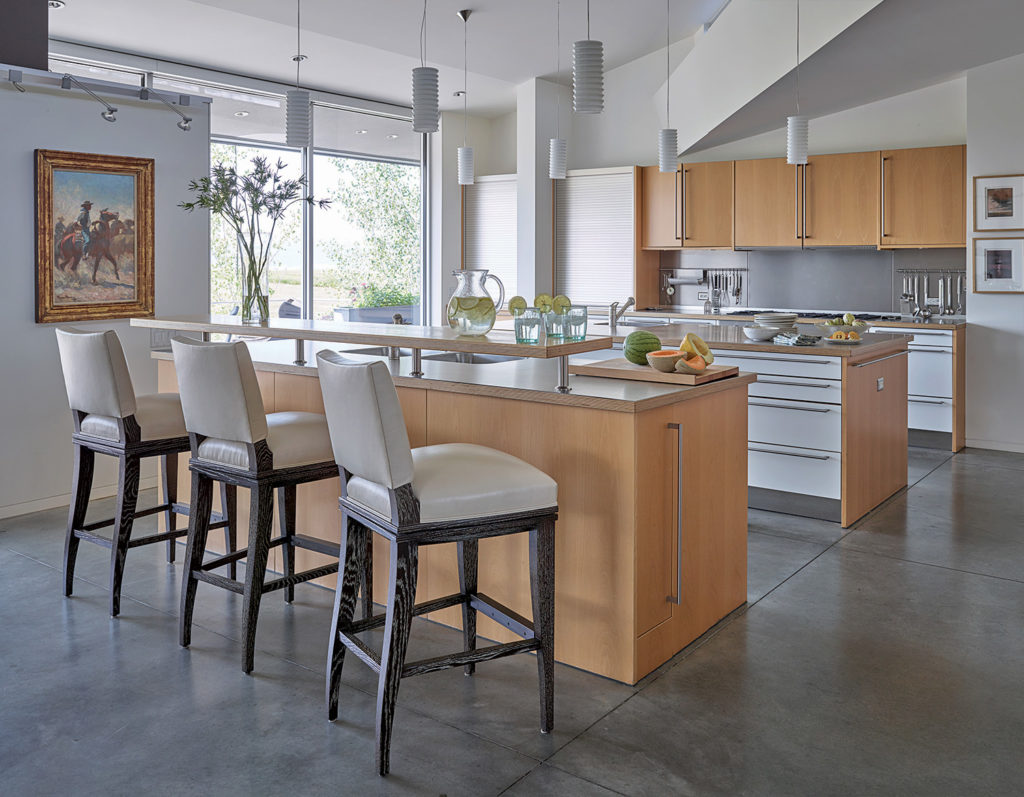 WRJ Design elected to keep the maple paneled Bulthaup kitchen specified by Keating for the residence; they framedit in a palette of soft grays. Bar chairs by Mattaliano sit at the island. Photo: WRJ Design

When Rush Jenkins spotted the renowned L.A. architect’s masterpiece for sale in 2014, he recognized the project as a once-in-a-lifetime opportunity to resurrect an important monument of modern architecture. As principal of WRJ Design in Jackson Hole, Wyoming, and the former design director for Sotheby’s New York City headquarters, Jenkins immediately saw the possibility of elevating the interior design to complement Keating’s vision. In describing the Murphy House, he refers to the interplay of the architecture with its surroundings as a “symphony of lines.” 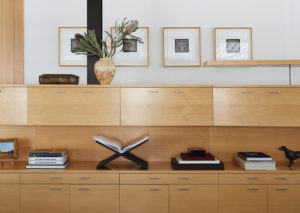 Maple also panels the custom built-in that spans the length of the living area. In addition to being a showcase for the owner’s artifacts, the cabinets offer plenty of sleek storage space. Photo: William Abranowicz

When Diane and KC Murphy asked whether they should purchase the home, Jenkins told them, “If you don’t buy it, I will.”

The Murphys knew they had found something extraordinary. But they weren’t convinced such a modern home could be an inviting hub for their family.

“Rush told us that he could, without a doubt, make this a warm and comfortable home. We trusted his vision,” says KC.

In 2015, Jenkins and Nida Zgjani, senior design director for WRJ, began the 18-month-long project by pulling nature’s palette indoors. The cool, polished concrete floors were layered with gray bamboo and silk rugs from Ralph Lauren. Subdued glimpses of color from draperies made of Loro Piana fabric and accessories, like the fur-covered pillows, provide splashes of umber. Varying shades of white and gray harken to the monotones of winter months.

“Keeping it quiet and pretty inside to be in the balance with both the architecture and the outdoors was key to our approach,” Jenkins says. Finding that harmony is the foundation of WRJ’s approach to design. 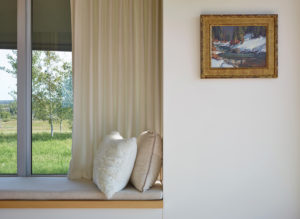 WRJ had cushions made for the window seats with fabric from Coraggio Textiles and Loro Piana. The tones, mirroring the palette of the natural surroundings, are repeated with custom Loro Piana drapes.

Next, WRJ sourced an eclectic mix of furniture to add texture. A BDDW credenza of gray leather and framed in bronze embellishes the entryway. Two-tone Poltrona Frau swivel chairs surround a Jiun Ho white lacquer-top game table. The combination mirrors the view just beyond the window.

“We like to introduce an element of European design and combine the contemporary with a few antiques,” says Jenkins.

Finishing touches such as a plein air painting by Scott Christensen in the entryway and a watercolor by Theodore Waddell over the game table further personalize the space.

To Brannon Bleggi, of Verdone Landscape Architects, the walls of windows at the Murphy House provide an everchanging view of the valley. For his firm, the priority was to open up those sight lines and expose new vistas that encourage a “sense of discovery.”

They began by culling back many plants that enclosed the house. “There was no invitation to go beyond,” says Bleggi. “We wanted to draw people to the outside.” 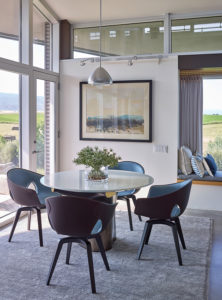 The Jiun Ho table creates an intimate seating area just off the living room, with engaging views of the outdoors.

Verdone made use of existing concrete slabs and native plants to establish outdoor spaces. Then they strategically created openings into the beyond. “We poked a hole through willow trees to provide a view to a creek that runs along the south side of the property,” he says. According to Bleggi, that brought a sense of intrigue and excitement. The project culminated with a trail that runs around the entire estate. “Our goal was to meld the constructed environment with the natural landscapes so that it feels like it has always been there,” he says.

For the Murphys, the question they put to Jenkins has been answered. The reimagined home reinvigorates Keating’s architecture and exceeds their original expectations.

“It’s a place where we feel comfortable when it is just the two of us, but it has also become a gathering place for our entire family,” KC says. 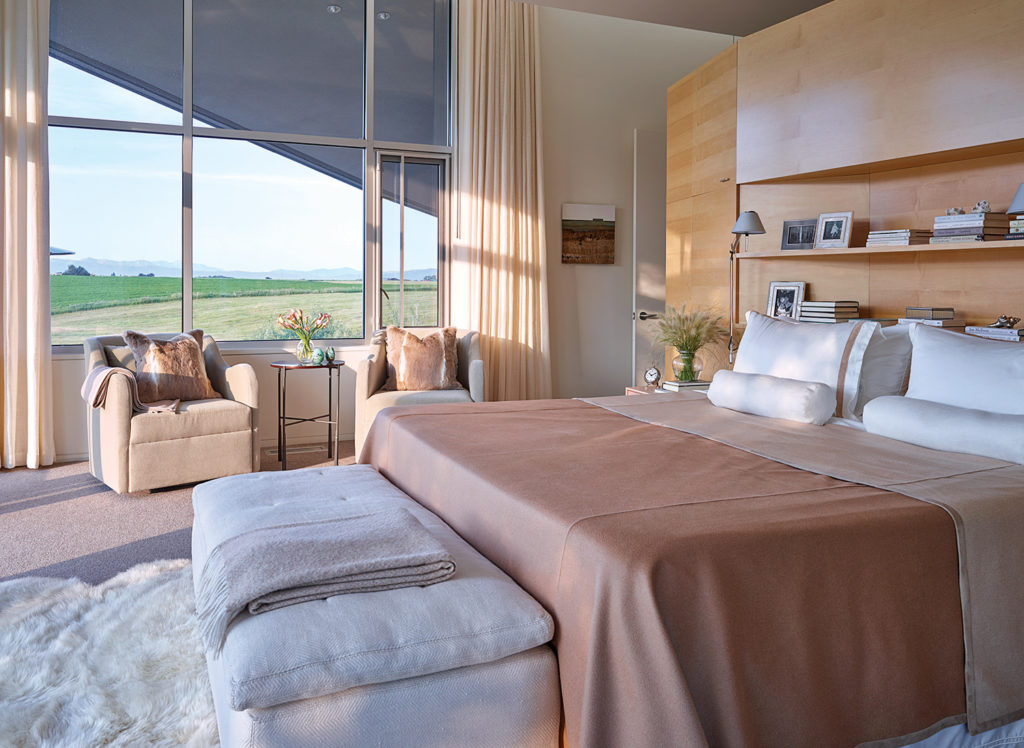 Polished concrete floors run throughout the home, with the exception of the master bedroom, which is clad with Ralph Lauren carpet in the same hue. Fur pillows provide accents to the Bolier chairs upholstered in Holly Hunt fabric. The gray ottoman by Verellen complements the Loro Piana cashmere blanket that drapes the bed. Photos: WRJ Design 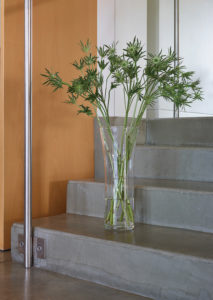 The earthy gray of the concrete floors provide a neutral background for the woods and textiles used throughout the residence. 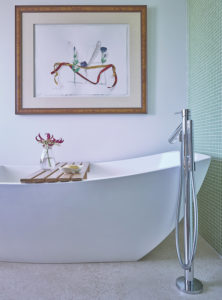