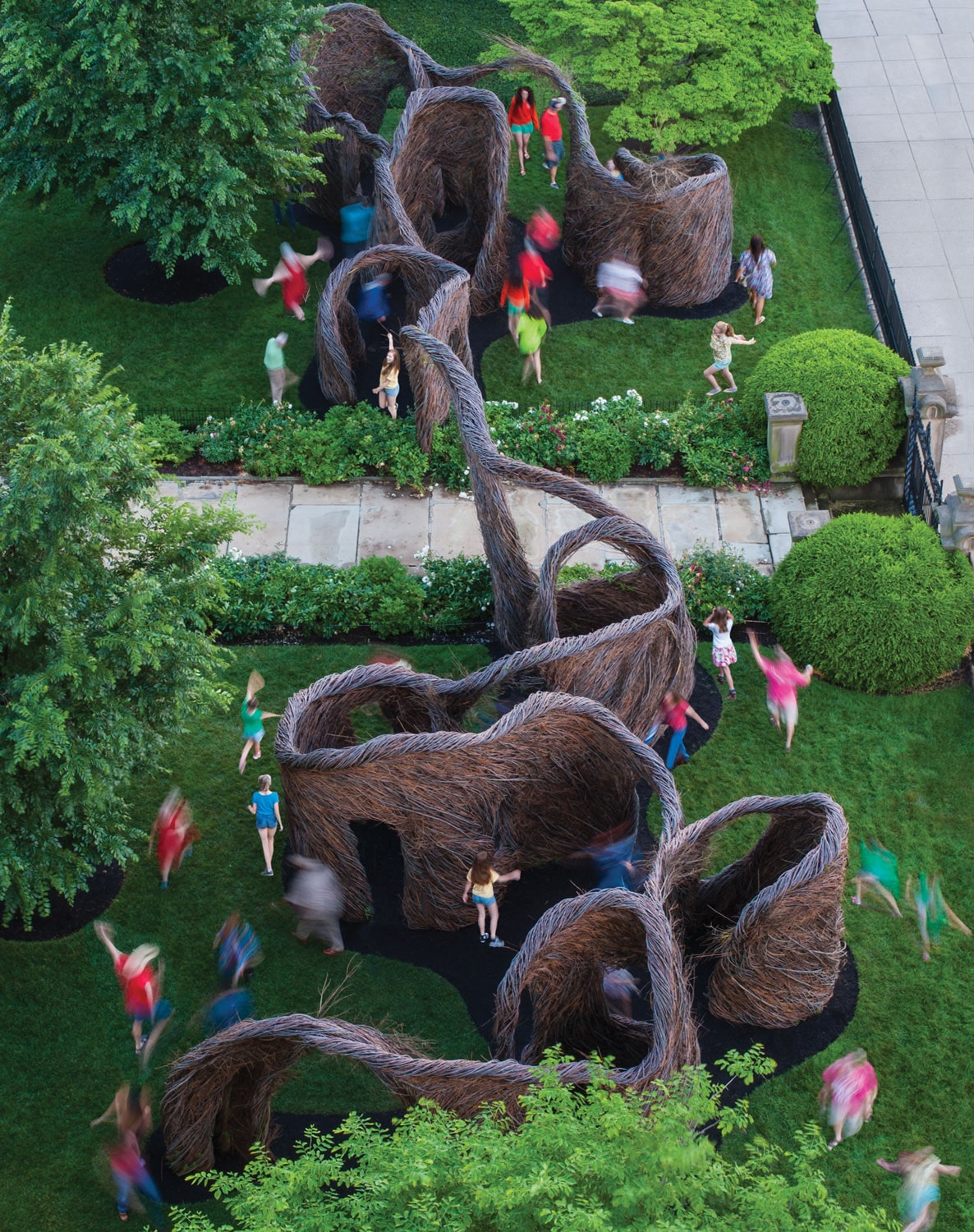 13 Mar From Saplings to Sculpture 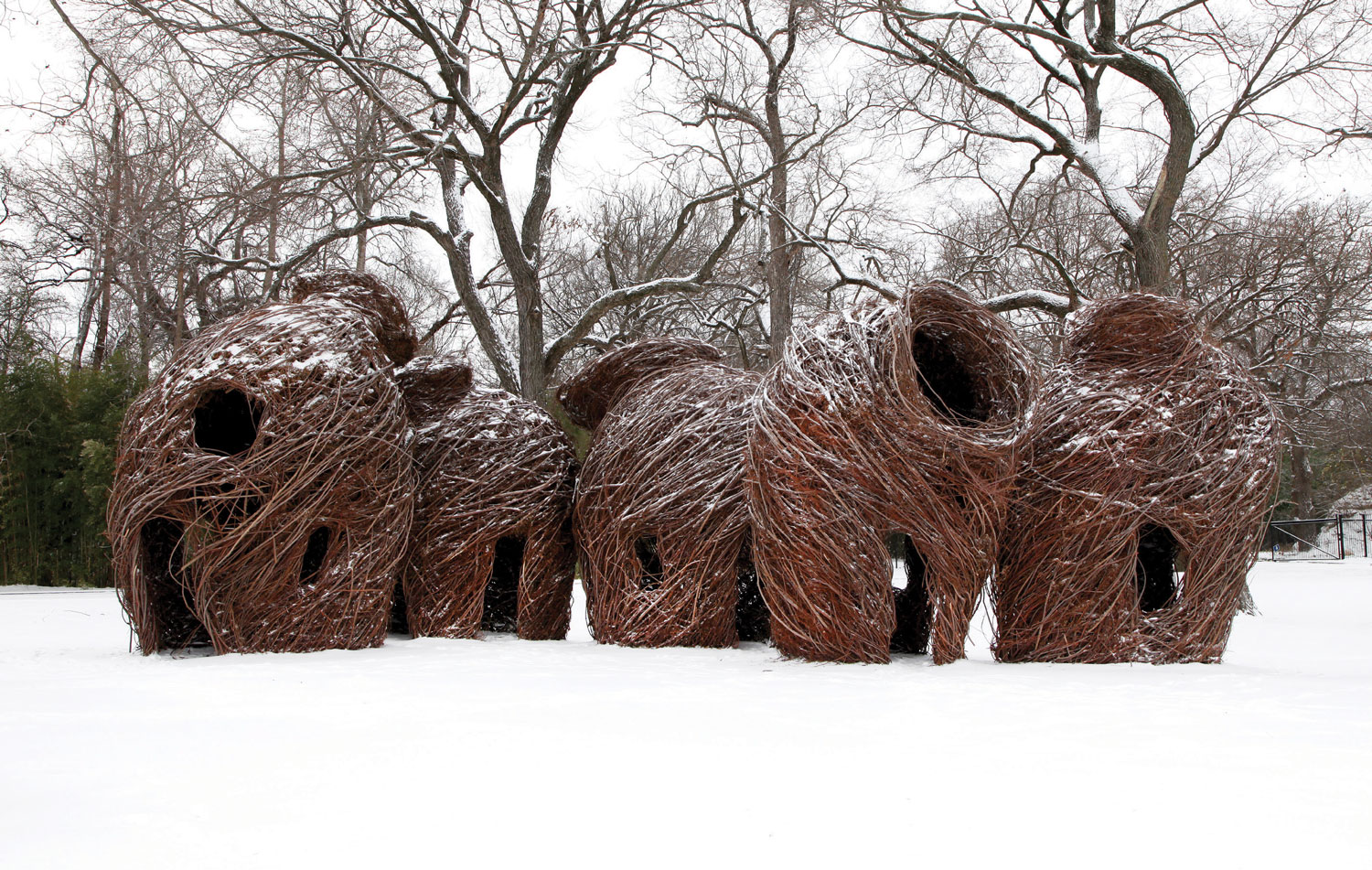 “I think it’s really my job to capture people’s imaginations,” says Dougherty. “There’s a subconscious attraction to the material which gives me a very willing audience.” 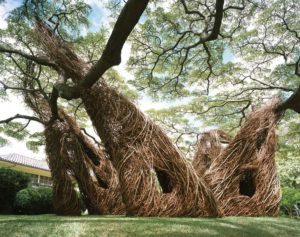 For some viewers, contemporary installation art can feel unfamiliar and even frustrating at times. Foreign material, ambiguous meanings, and formal gallery settings can seem inaccessible for those who have little or no experience with contemporary art. Dougherty’s refreshing stick works instinctually resonate with viewers of all ages and backgrounds as visceral reminders of childhood play, a walk in the woods, or a more primal existence. Dougherty’s material is emotionally relatable; we’ve held it in our hands, built forts with it as children, and gathered it for fire. Put simply: we “get” sticks.

This isn’t to say the work is juvenile; Dougherty is prolific. As of April 2019, he’ll complete his 300th monumental work worldwide, with sculptures appearing from Scotland to Japan to Brussels over the course of his 30-plus-year career. Booked two years in advance or more, each piece requires three weeks for construction on Dougherty’s rigorous schedule of 10 sculptures per year, making him one of America’s most sought-after installation artists. 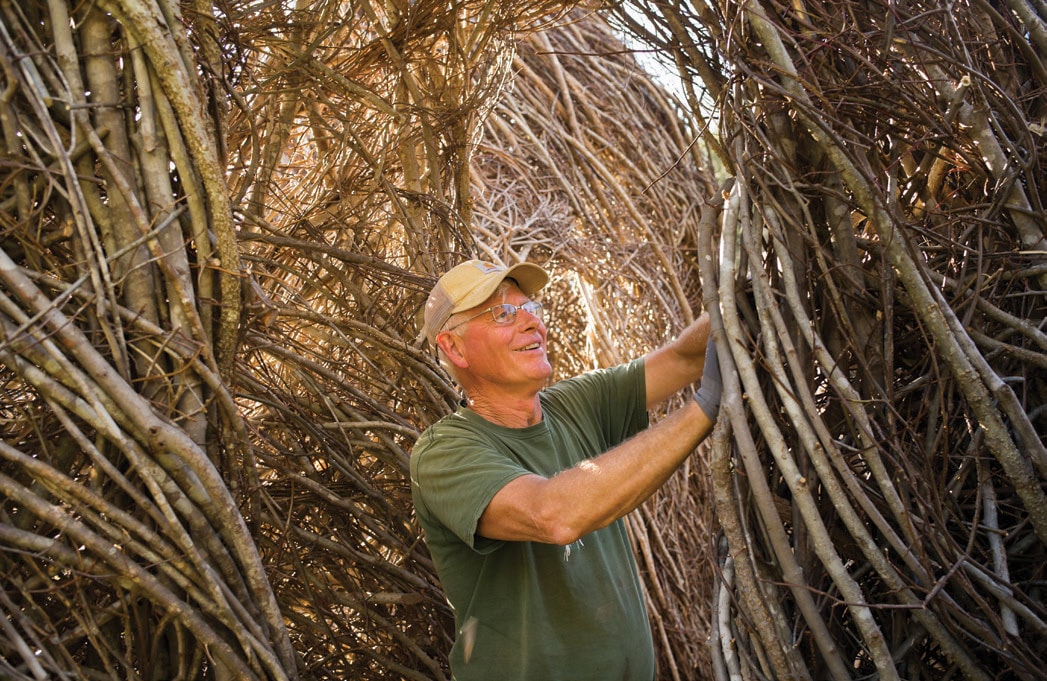 Patrick Dougherty works on an installation at Duke University in Durham, North Carolina, called The Big Easy in 2017

This was not always the case, however. Early in his career, dealers felt Dougherty had a limited collector base and denied his ephemeral works, which typically have a lifespan of one to two years before being reclaimed by the earth, or needing to be removed from an indoor space. And without a gallery, Dougherty couldn’t be successful, or so he was told. The interested institutions were still somewhat confused by his primitive medium and casual demeanor. “People didn’t understand that sticks were a legitimate working material,” says Dougherty. “They didn’t know whether I was a yardman or a janitor, if I should be taken out to dinner or brought home to meet their family. It was a learning curve on both sides.” 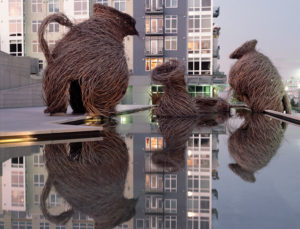 Dougherty’s early inklings toward his life as a sapling sculptor started in the 1970s with what he considers his first work: his home in Chapel Hill, North Carolina. He built his house from the ground up, using foraged material, a practice that extends into his installation process today.

At the time, he was on a business trajectory, with a graduate degree in hospital and health administration, but he had always been drawn to carpentry and hands-on work. His laborious interests had a creative bent, however, and his enchanting homestead features intricately patterned sticks that embellish doors, ceilings, and walls. Also on the property are decorative, yet functional, twig fences and an Andy Goldsworthy-esque stone wall and archway. 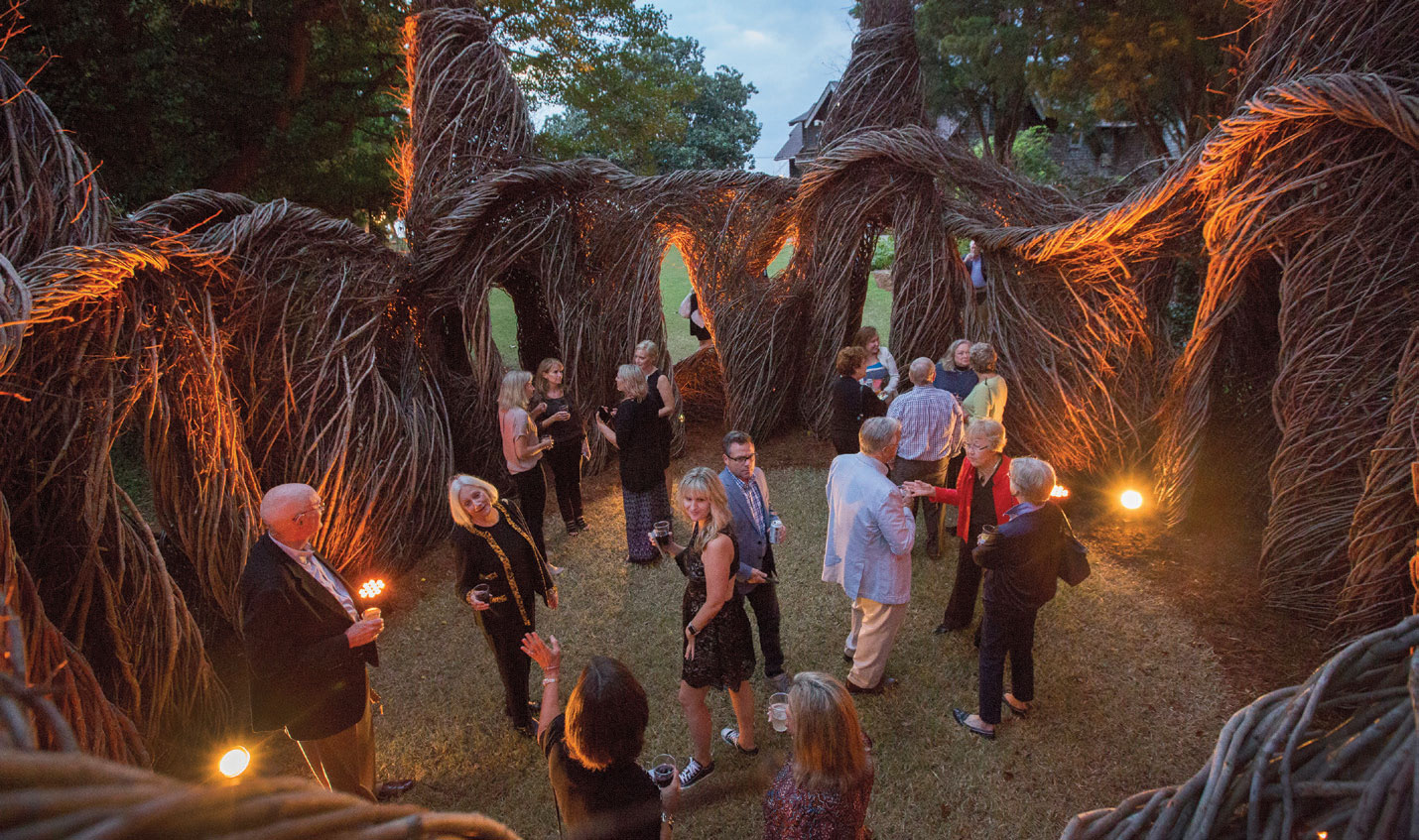 In 1981, Dougherty enrolled at the University of North Carolina to study art history and sculpture. His graduate work was an exploratory journey in which he sought an immediate, reactive method to create large-scale forms. He first experimented with clay but ultimately landed on tree saplings as his medium and the natural world as his canvas. “I found that sticks could be used as lines with which to draw,” he says. 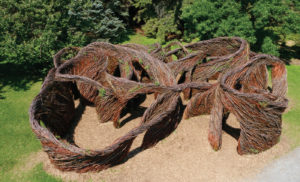 Dougherty’s site-specific vision and affinity for foraged, ephemeral materials echoes the sentiments of such Earth artists as Robert Smithson, Nancy Holt, and Michael Heizer, who established careers outside of the gallery system. “Their freedom infected me,” says Dougherty, who aligns with the spirit of the Earth art movement but distances himself from some of its political commentary. “I don’t see his work as being any form of social activism,” says Linda Dougherty, Patrick’s wife and curator at the North Carolina Museum of Art in Raleigh. “It’s more about getting in touch with the primal relationship between humans and nature.”

Janalee Emmer, curator at the Brigham Young University (BYU) Museum of Art in Provo, Utah, agrees. Ongoing through October 19 at the museum is Dougherty’s installation Windswept. “Patrick is continuing a dialogue that started in the late 1960s and early 1970s in that he’s re-thinking the gallery or museum space, while expanding our view of what art is,” she says. 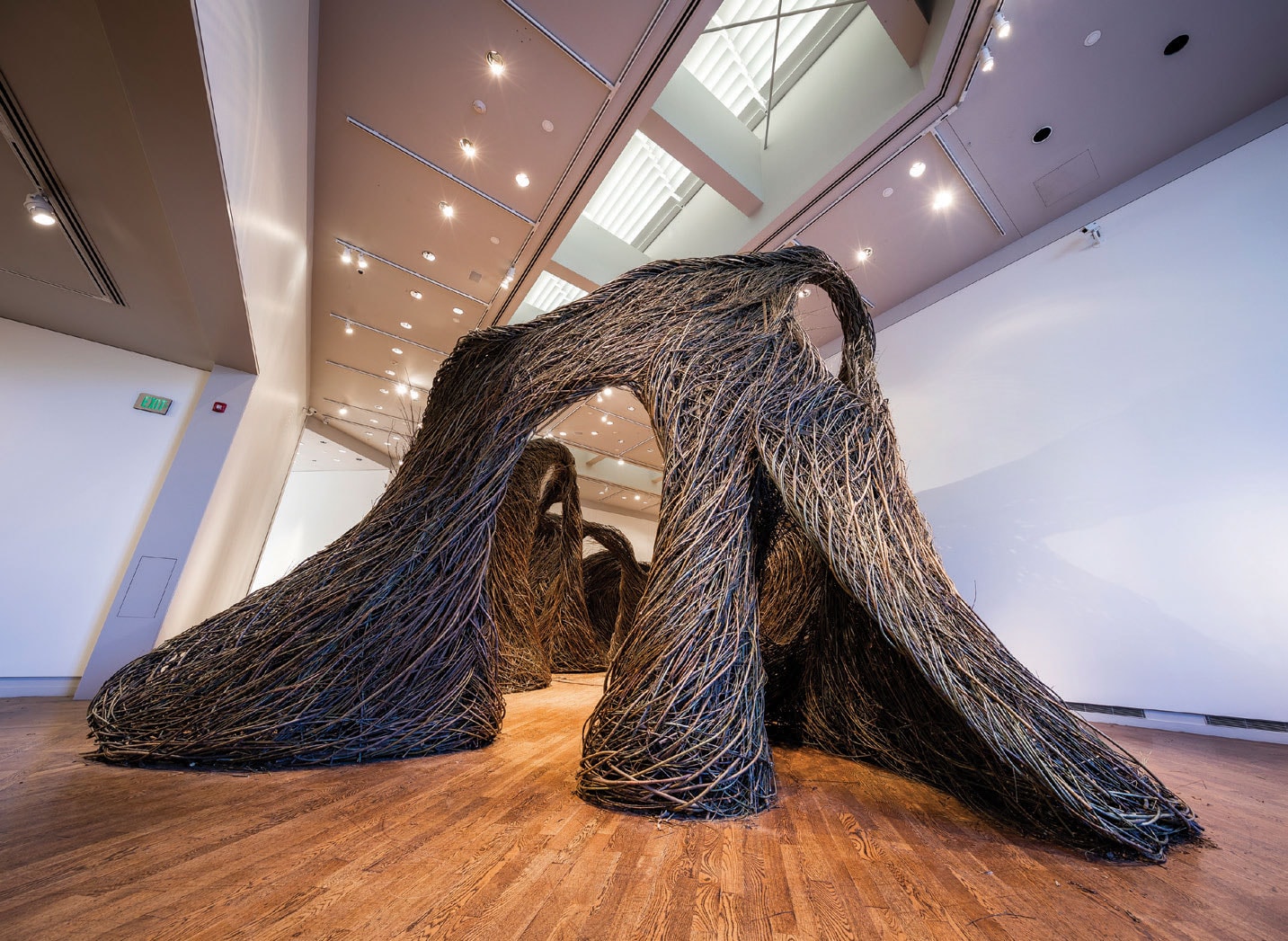 The sculpture is one of two stick works in Utah, the other being an outdoor piece at Utah State University in Logan. 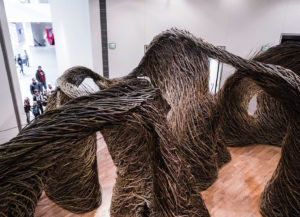 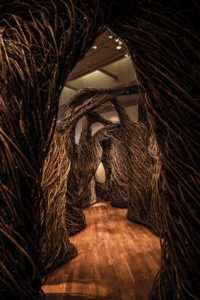 Dougherty’s process begins with a site visit and initial sketch. In the case of Windswept, this sketch consisted of a single serpentine line and a few poetic phrases. Word associations are key links between Dougherty’s initial ideas and their physical iteration. “Every flatlander loves a windswept mountain,” was scribbled into Dougherty’s sketchbook during his site visit at BYU, which lead to the exhibit’s title and overall vision for the installation. “To flesh out an idea, I write a few words down and then ask myself, ‘What does that mean?’” says Dougherty, whose undergraduate degree is in English. “My conviction is that a lot of what you know is in your subconscious; it’s just a matter of getting in touch with it.”

While Dougherty’s vision is rooted in the natural world, his sculptures have an equally jarring effect when installed indoors. No matter the location, each piece emulates the local landscape or plays off of a museum’s collection. At BYU, Dougherty was inspired by the grand mountain views that fill the museum’s windowed façade. Windswept extends that elevated ridgeline into the gallery with graceful “sheltering slopes,” another phrase from the artist’s sketchbook, which ebb and flow beneath two-story ceilings. A coiled cornice tops the piece as it unfurls through the room to form loping arches and narrow passageways, mimicking Utah’s natural architecture. 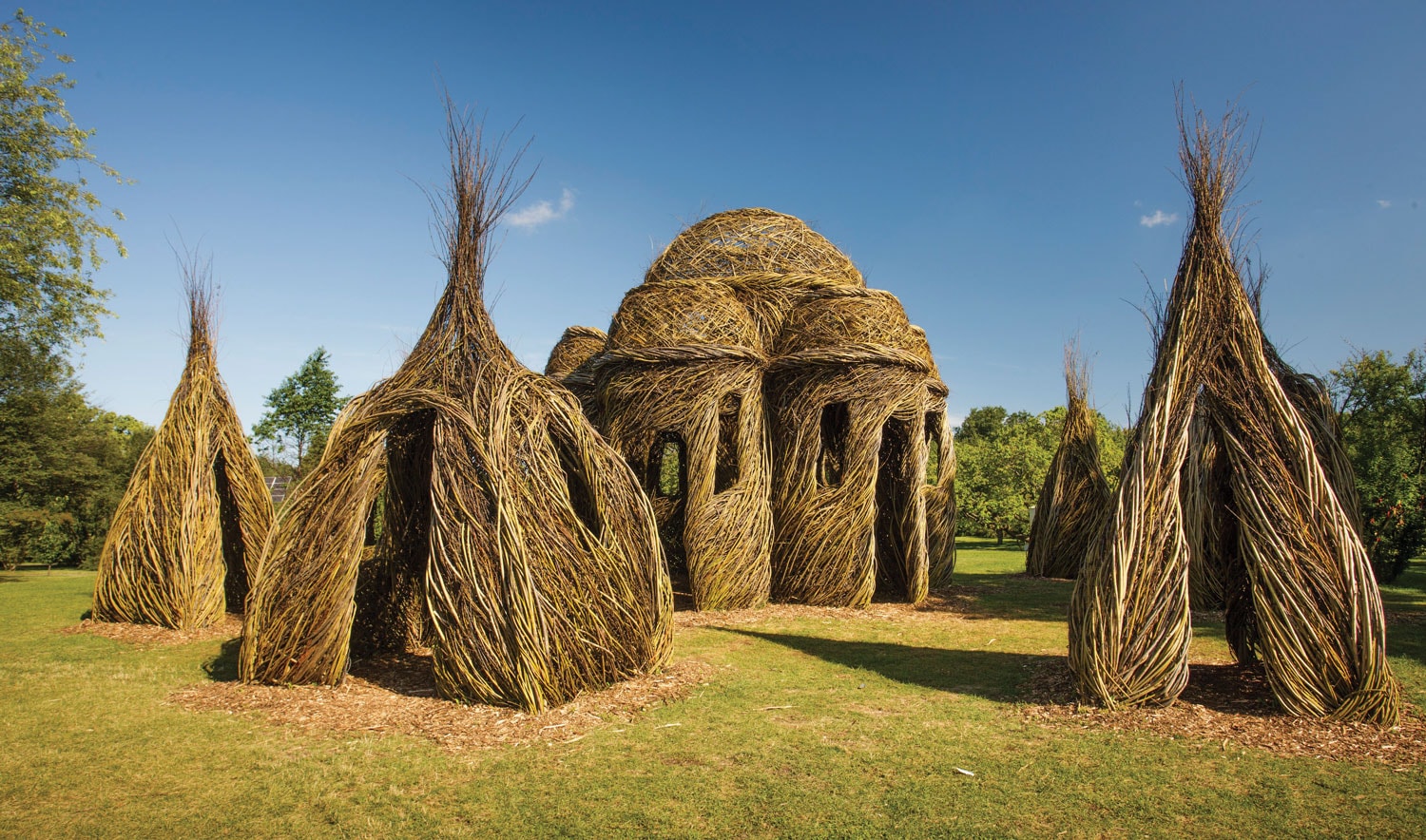 “He works through loose ideas and is very flexible and fluid in his process,” observes Emmer, who witnessed Dougherty calmly work through the structural challenges that come with a museum setting, while smoothly directing a team of community volunteers. Public engagement is an integral aspect of the work, and Dougherty and his assistants recruit locals to help construct each piece. This collaborative effort gives the community a sense of ownership over the artwork, while rejuvenating the artist’s repetitive, laborious process. 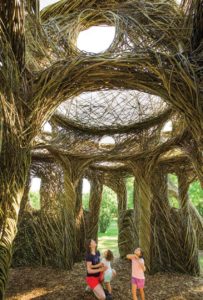 Even as he turns 73 this year, the industrious Dougherty anticipates that his future installations will be larger and more complex, due in part to his growing team of assistants. Dougherty’s son, Sam, recently came on board and has been instrumental in his father’s expanding vision; he’ll be a big part of the work’s evolution moving forward.

Dougherty’s 300th installation opens April 27, 2019, at the Denver Botanical Gardens in Littleton, Colorado. Like his other installations there, it will last until it naturally falls apart.

“I think it adds a certain quality to the sculptures in that they can’t last,” says Dougherty. “You have to enjoy it like you would a dance or a nice garden — you have to enjoy it during its lifetime. And that finality you’re anticipating adds to the desirability of the work.”