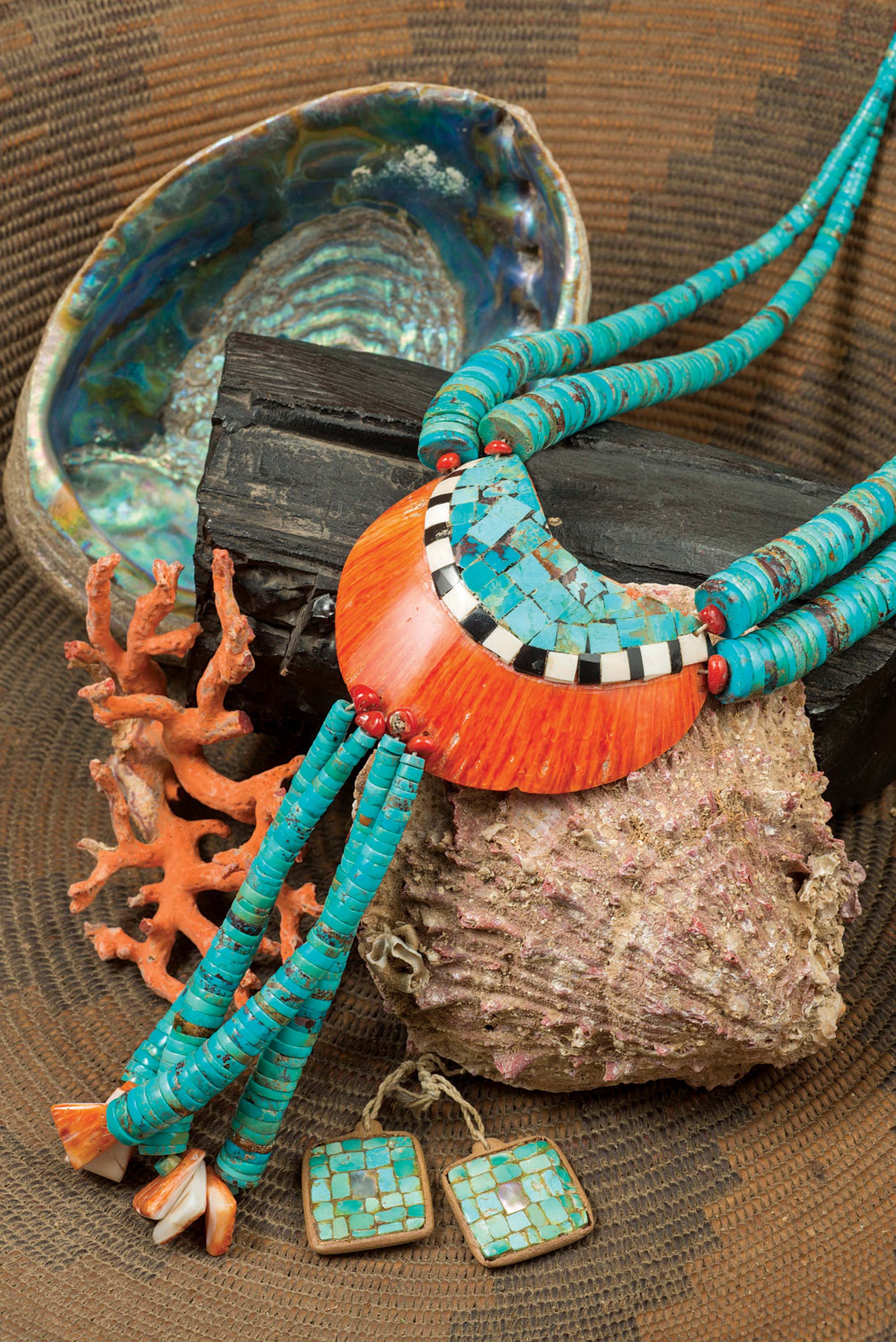 For some Native Americans, turquoise has a spiritual aura.

When most people talk about something “precious,” gold, of course, invariably comes up. It’s no secret that it’s considered among the most valuable of metals.

Turquoise is generally regarded as a distant relative, at best. But, unlike gold, turquoise can’t be measured only by a specific standard of value. This stone is measured by a much deeper set of standards. These are the stories of some of the people who create that value.

“To the Native peoples of the Southwest, turquoise is life itself,” says Maxine McBrinn, curator of archaeology at the Museum of Indian Arts & Culture in Santa Fe, New Mexico. “Turquoise stands for health, happiness, the continuity of life and tradition and family. But it can also mean different things to different peoples,” she explains. “To the Pueblo people, for example, it symbolizes the lake where people first emerged onto the Earth. And to the Zuni, the blue turquoise can stand for the sky, and the green for the water — which is, of course, very important to the peoples of the Southwest.”

However, McBrinn explains, turquoise is hardly unique to the Southwest. It has been mined for thousands of years in Iran. Named by the French, who got it from middlemen in Turkey (hence “turquoise” for “Turkish stone”), the stone has been used as jewelry in the Middle East for thousands of years. In fact, King Tut’s death mask has turquoise in it.

“Turquoise is formed underground by a mixture of copper and aluminum, and the movement of water on those two substances,” says McBrinn. “And it’s only formed by water, if you think about it, in lands where water is scarce … such as the Southwest or the Middle East.”

Douglas Magnus exercises the ultimate system of quality control. He not only creates belts, buckles, necklaces and pendants in his Magnus Studios in Santa Fe, but he also owns the mines from which his turquoise comes. In fact, he owns six mines in the Cerrillos Hills near Santa Fe, at the northern end of New Mexico’s historic Turquoise Trail.

“These mines actually go back a thousand years,” Magnus says. “[They] were used by the Anasazi and some Meso-American peoples. I bought them in 1988. They’re not profitable on the business end for me. But they provide me with very high-quality stones.”

“When I find a good stone, it talks to me,” Magnus says. “And when that happens, I want to create something beautiful with it.”

Na Na Ping grew up on a Pascua Yaqui reservation in southern Arizona. He married a Nambé woman from New Mexico and has spent the past 40 years on the Nambé reservation near Santa Fe. During that time he’s become one of the most respected turquoise artists in the world.

“I didn’t know a thing about jewelry making or turquoise until I was a young man,” he says. “I went to work for my uncle in Albuquerque, who had a thriving turquoise piecework shop. It was just for the money, really. But along the way, something happened. I fell in love with this stone.”

Ping works only with all-natural stones, rather than with stabilized stones that might have a thin sheet of plastic covering or are treated with an epoxy resin.

“Now, turquoise has great spiritual meaning to me,” Na Na Ping says. “When I’m working with it, it tells me to be thankful to the Creator for making such beauty. And to be thankful for the gift of bringing happiness into peoples’ lives.”

The husband-and-wife team of Lorenzo and Mary Louise Tafoya grew up on the Santo Domingo Pueblo outside Albuquerque, where the stone was an important part of their culture. They each grew up with a love of turquoise because their parents worked with it. Now, their silver and turquoise jewelry is displayed in museums, including the Eiteljorg in Indianapolis and the Heard in Phoenix.

“Turquoise has stood for good things in our culture, for thousands of years,” Lorenzo Tafoya says. “That explains why it’s been found in ancient Anasazi ruins.”

Steeped in tradition, the Tafoyas have evolved their craft into pieces that reflect contemporary style. “Our purpose in adapting a more contemporary style is to give more people the opportunity to enjoy it,” Lorenzo Tafoya says. “We’re trying to bring turquoise to a wider audience.”

As a fourth-generation turquoise artist, Joe Dan Lowry knows more about the stone than just about anyone in the world — and he’ll gladly tell you so. And many artists and collectors agree. He researches the stone in all its facets, from its chemical content to its history. He’s written three books and lectures all over the world. Lowry also owns the Turquoise Museum in Albuquerque, with a workshop in which he crafts the stone.

He’ll tell you immediately that most information on the stone is more marketing-driven than fact-based.

“None of us can see without those before us,” he says. “I’ve spent my life researching turquoise, buying turquoise, working with turquoise and lecturing about turquoise. But … we couldn’t research turquoise today without the gift of the knowledge given [to] us by earlier peoples.”

Lowry, too, points out the stone’s international heritage, ranging from ancient Persia to modern China, the world’s largest producer of turquoise.

“A diamond has a specific set of ‘judging’ characteristics,” Lowry says. “But turquoise is much more personal … it’s about what it says to you.”