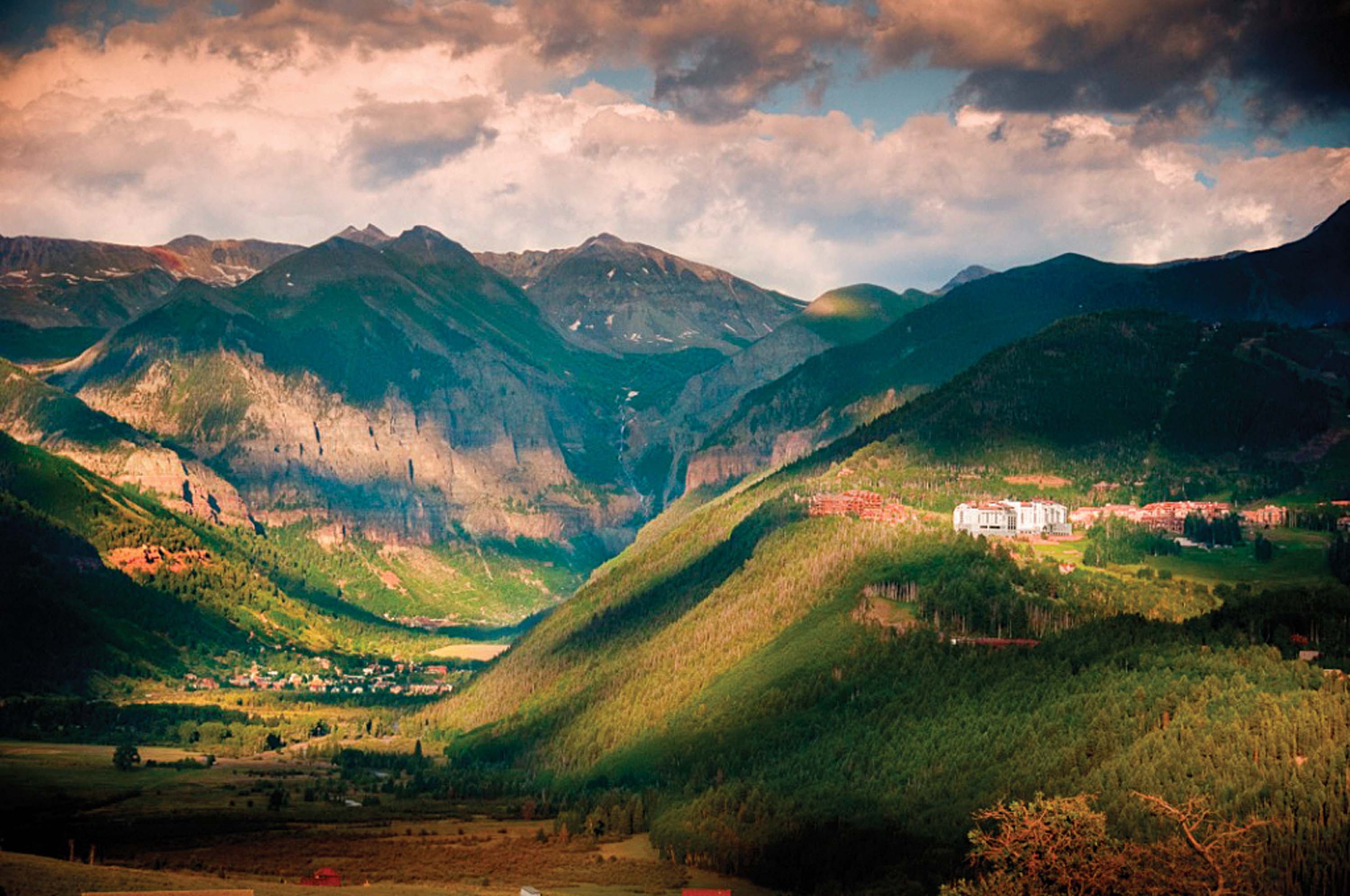 Stunning in four seasons, the Peaks Resort & Spa is 7 miles from the airport, a gondola ride from town, and just steps from more than 125 telluride ski trails. Image courtesy of the Peaks Resort and Spa

An old Colorado mining town turned ski resort might not be first on the list of obvious spots for a vital art scene, but Telluride is a series of surprises to the uninitiated. Ask yourself, how many towns with a population under 3,000 have a Cultural Master Plan? Telluride is one of the top five candidates of 44 vying to be named one of Colorado’s newly instituted Creative Districts. And while Telluride is known worldwide for its skiing and its nearly 40-year-old end-of-summer film festival, the place is positively festival happy, especially when it comes to summer and the arts.

Celebrities such as Tom Cruise and Jerry Seinfeld may have bought homes in Telluride (and Ralph Lauren’s ranch is nearby), but Aspen it’s not. Forget about designer boutiques. The year-round population is laid back, more socially conscious than status-conscious. And really into good food.

Both of the major art festivals have culinary components, and on summer Fridays at the Telluride Farmer’s Market, artists and artisans set up tents next to vendors like High Wire Ranch with its sustainable grass-fed elk and bison. The shoppers are local chefs, year-round residents, owners of second homes and a fair share of folk who failed to get the memo announcing the ’70s were over.

Telluride is one of those places people visit, only to find themselves permanent residents. It might have something to do with the altitude — it’s 8,750 feet above sea level, leaving many gasping (its satellite, Mountain Village, is 9,545) — but it’s the sheer beauty of this box canyon in the San Juan Mountains in Colorado’s southwestern corner that many find they simply can’t leave, even if it means having bears assault their trash cans. It’s spectacular in the winter snow, lush in summer and in the fall the poplars on the mountainsides turn gold. Downtown’s Victorian houses and brick commercial buildings were declared a National Historic Landmark District in 1964.

Join a Thursday Night Art Walk, when 15 venues open their doors — including, of course, some eateries. Check out local artists at the Ah Haa School for the Arts in the old train depot, or the gallery at Telluride Arts at the Stronghouse Studios and their auxiliary across Fir Street, Gallery 81435. Stronghouse Studios provides work space for residents such as Flair Robinson, a mixed-media artist. On the main drag, director Baerbel Hacke, of the 28-year-old Telluride Gallery of Fine Art, shows not only such internationally recognized artists as Christo and Francisco Zuniga, but more affordable emerging artists as well. Around the corner on Pine Street, Lustre Gallery, offers a range from églomisé chandeliers by Ulla Darni to baskets from the Panama rain forest.

In early July, there’s the Telluride Plein Air Festival, followed by the Telluride Art + Architecture Weekend, from July 17 to 21 — sponsored by Telluride Arts, with a studio tour day followed by culinary day, finishing with home tours — which coincides with the Ah Haa Auction on July 18. The Telluride Arts Festival takes place August 16 to 18 in Mountain Village (connected to town by a complimentary gondola). Of course, it’s a culinary as well as an art festival, a juried exhibition with artists applying from across the country.

Luckily, the Arts Festival weekend once again coincides with the Telluride Mushroom Festival, which inspires local chefs to add fungi to their menus. The Hotel Madeline offers a mushroom foraging dinner for 20 guests. First there’s the foraging, led by John Sir Jesse, a well-known local fungi and wild plants expert, then an eight-course mushroom-inspired dinner and wine tasting under white cabanas in a rolling field.

Nestled into Mountain Village, the Hotel Madeline’s walls double as an art gallery, curated by Sara Eyestone, an artist who also oversees the Madeline’s sister property, La Posada, in Santa Fe. “There’s never enough wall space for the talent,” she says ruefully. Everything is for sale with no commission charged the artists. So you can luxuriate in the spa, lounge by your fireplace, sample bartender Oshane’s cocktails and chef Cory Sargent’s menu at reV and leave for home with a piece of art.

The Peaks Resort & Spa is Mountain Village’s original luxury hotel, and its walls are a gallery of local artists. The ski-in, ski-out Peaks has Colorado’s largest spa and, as overused as the word is, the views are, indeed, breathtaking.

When you’re not looking at art and meeting artists, Telluride is an ideal base for hiking forays, laced as it is with beautiful trails at all levels of difficulty (but remember, the altitude knocks some people out for a few days). The extra-fit set off up Tomboy Road toward Bridal Veil Falls in the canyon’s fold. For the less ambitious, Telluride Outside offers four-wheel-drive tours up the crazily narrow dirt road, bouncing along past abandoned wildcat mines, skirting precipitous drops and learning a bit about the area’s colorful history. Telluride Outside can take you fly fishing or river rafting as well.

Bring your appetite to the organic café, The Butcher & Baker, for everything from eggs to salads and sandwiches, or family-owned Floradora Saloon, where the casual menu is fresh, local and organic, from burgers to duck quesadillas. Or have a steak, rack of lamb or nut-crusted trout at the new Sheridan Chop House & Wine Bar in the historic new sheridan Hotel and opera house. There are flights into Telluride Regional Airport — landing on the mountaintop strip is quite an experience — but there are more flight options 70 miles to the northeast at Montrose Regional Airport, an approximately one hour and 45 minute shuttle ride, depending on road conditions. And to be totally connected even before you arrive, check out www.tellurideinside.com. 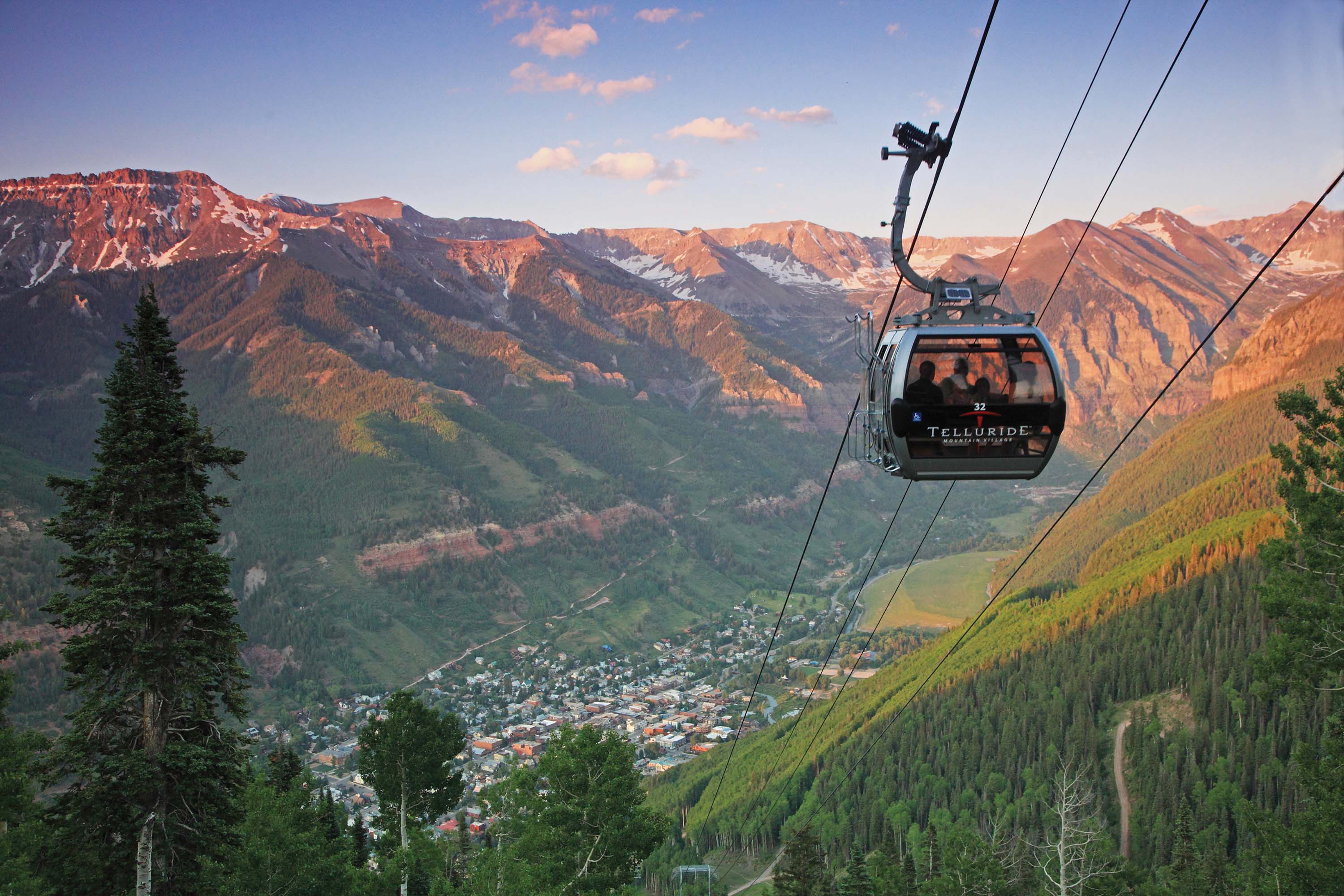 The gondola ride offers an easy way up to telluride’s best views. images courtesy of the telluride tourism board. Photos: Ryan Bonneau 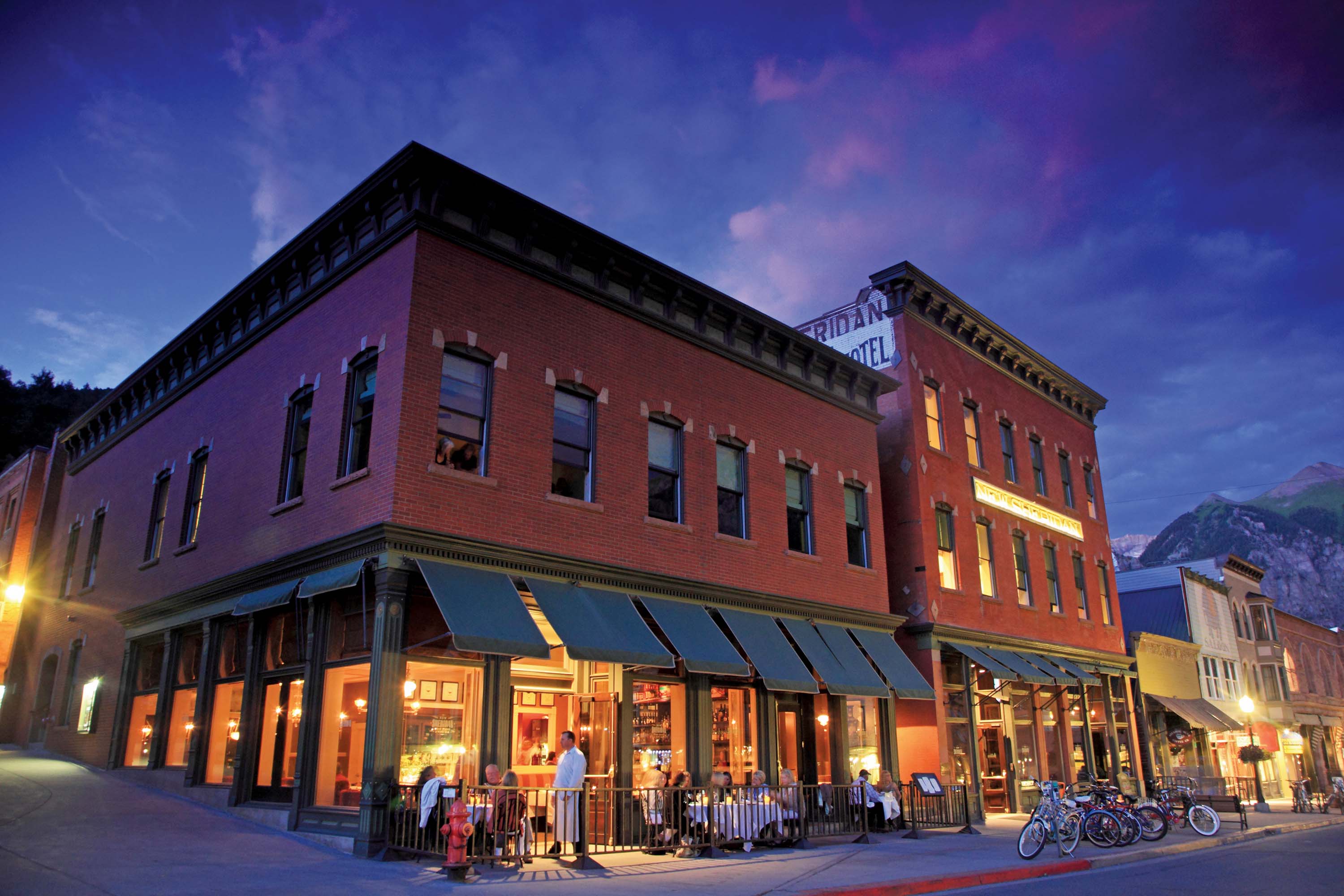 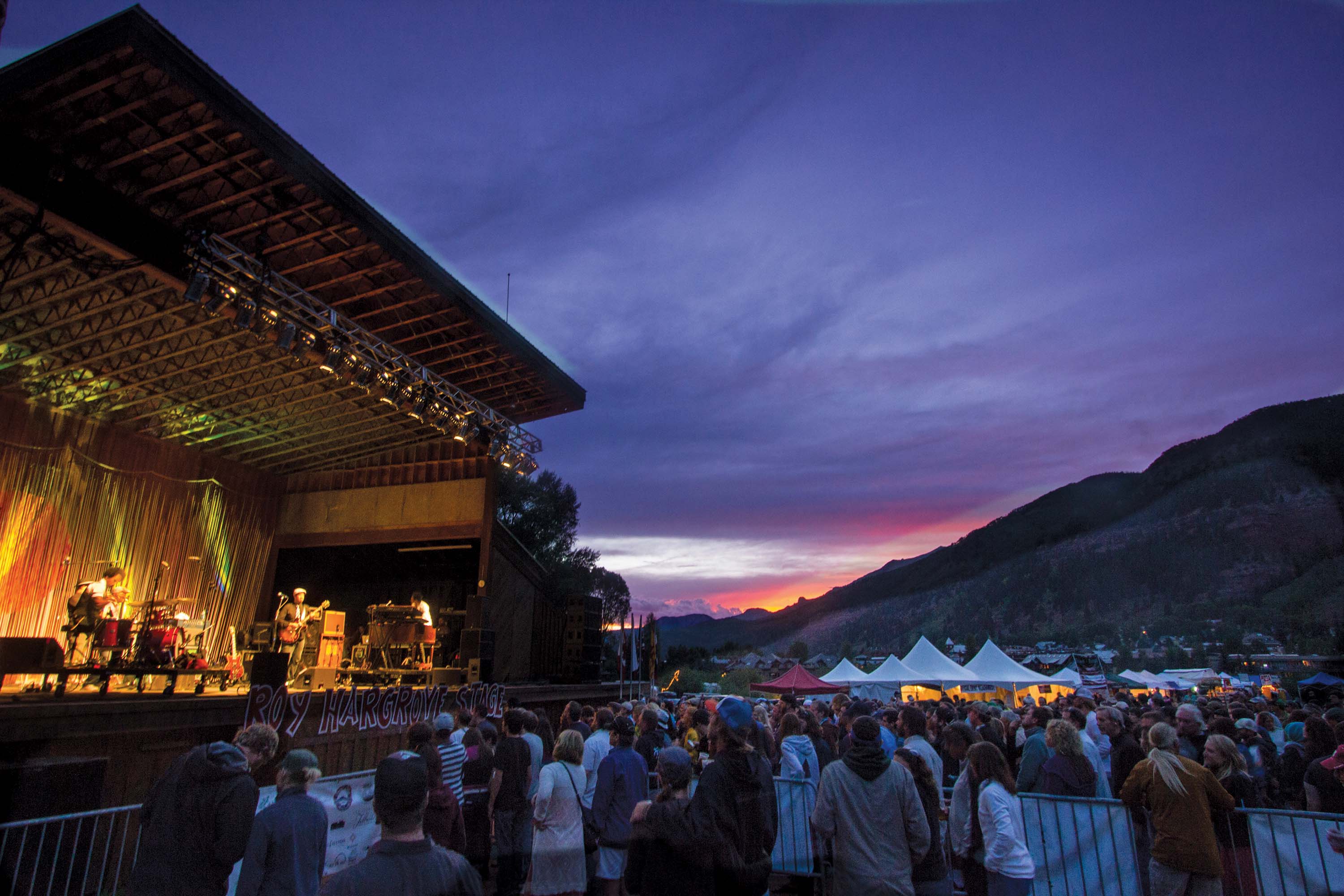 The summer sun sinks behind the san Juans at the annual Jazz Festival. images courtesy of the telluride tourism board. Photos: Ryan Bonneau 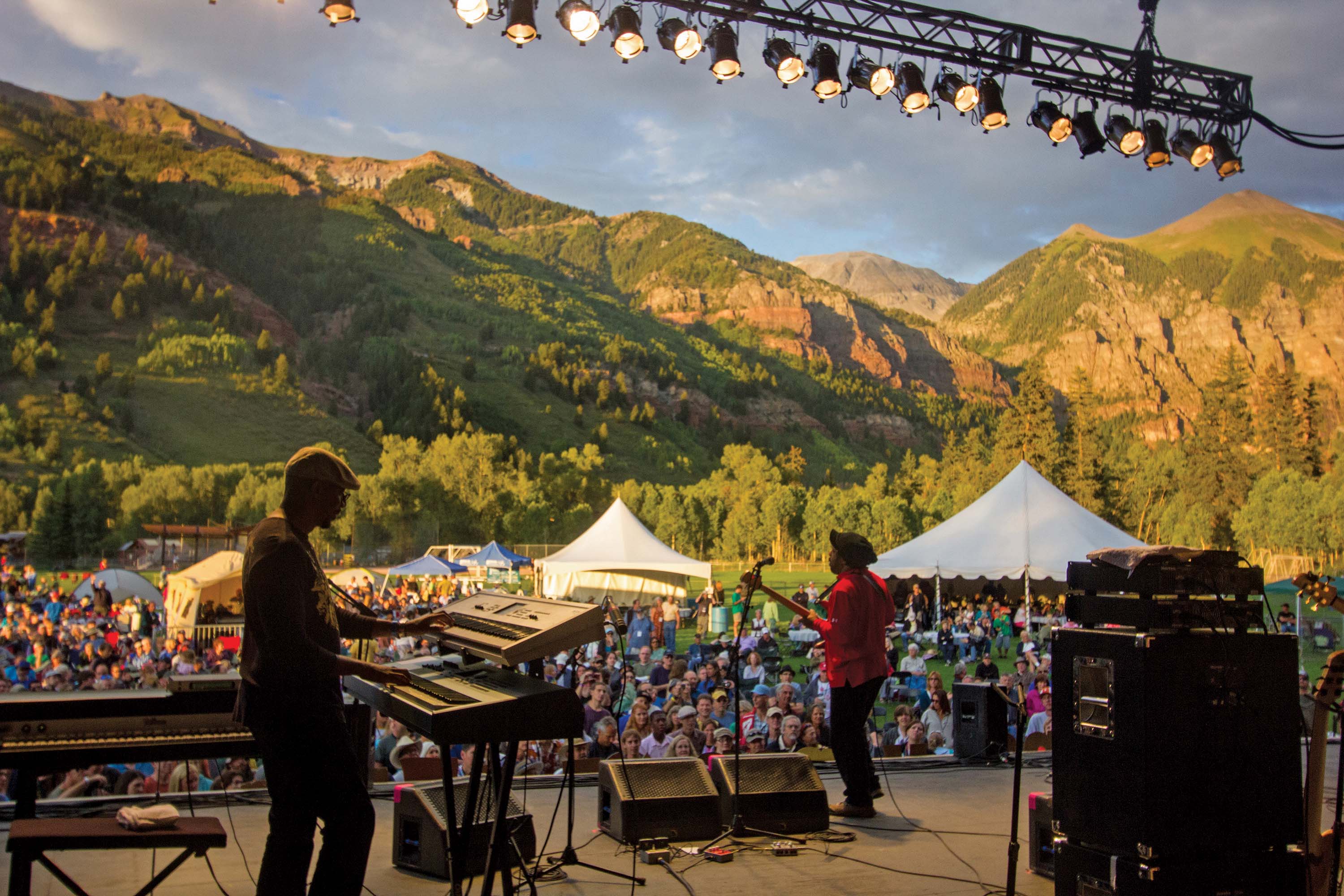 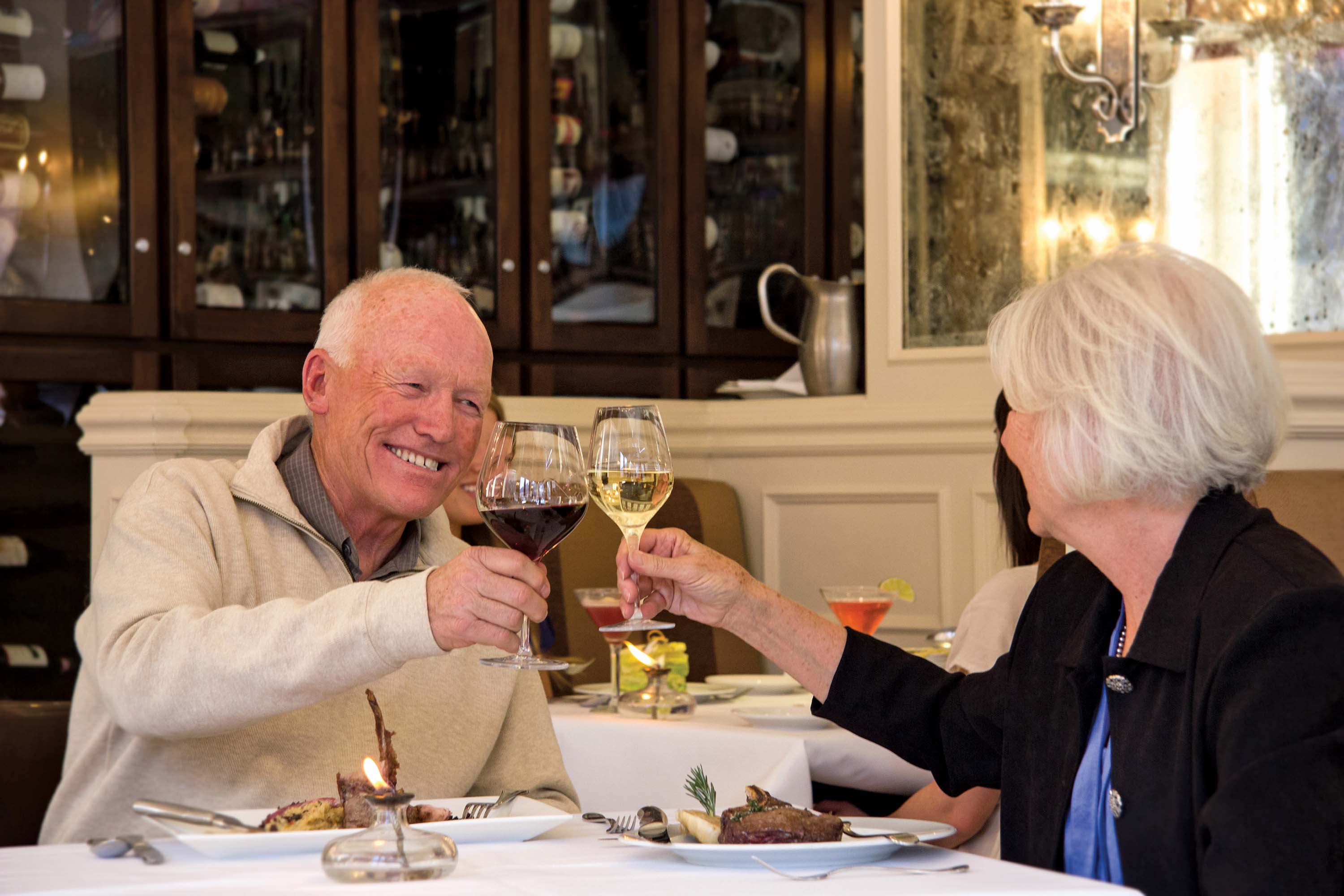 This ski/art/food town offers a winning mix of gourmet eateries. 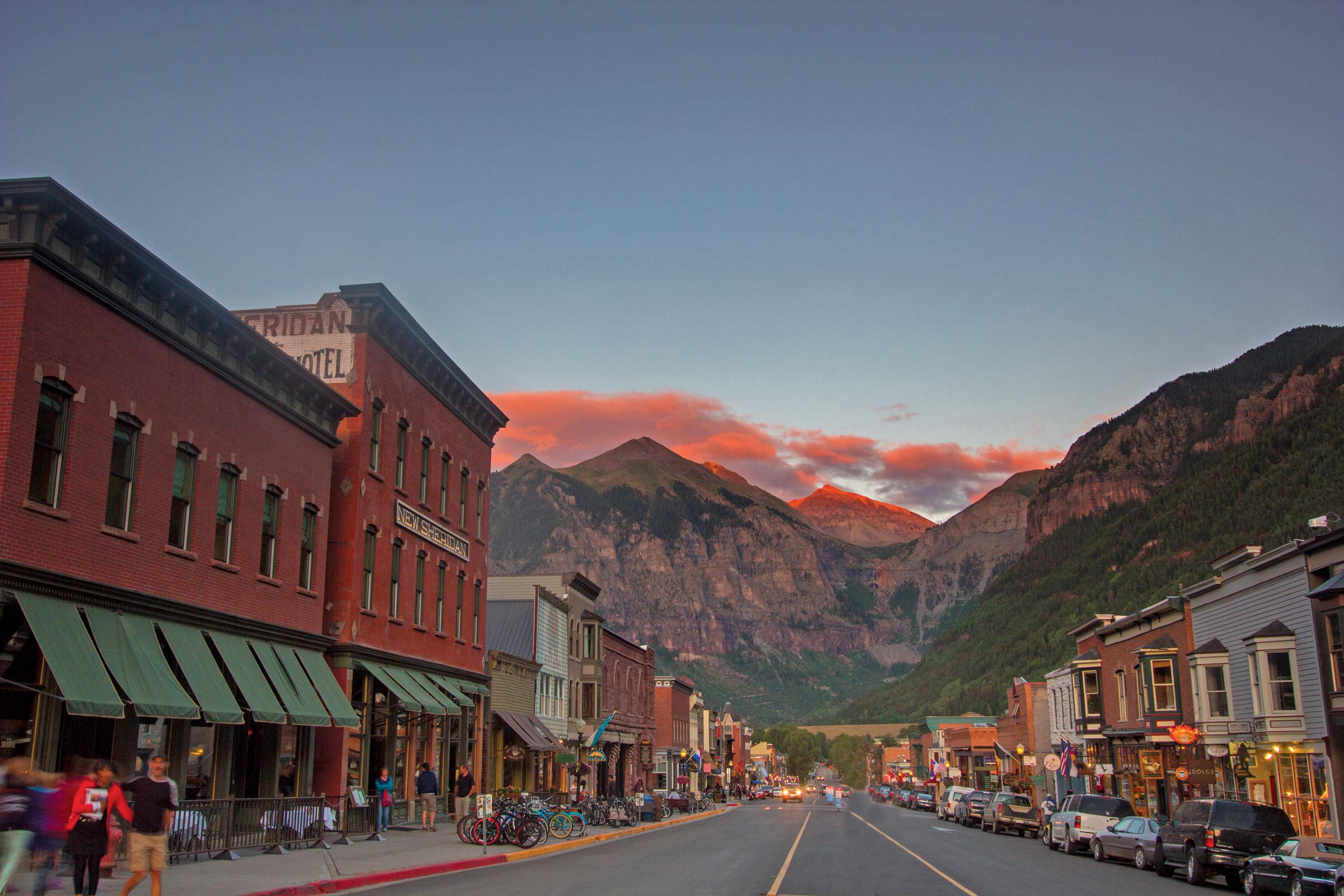 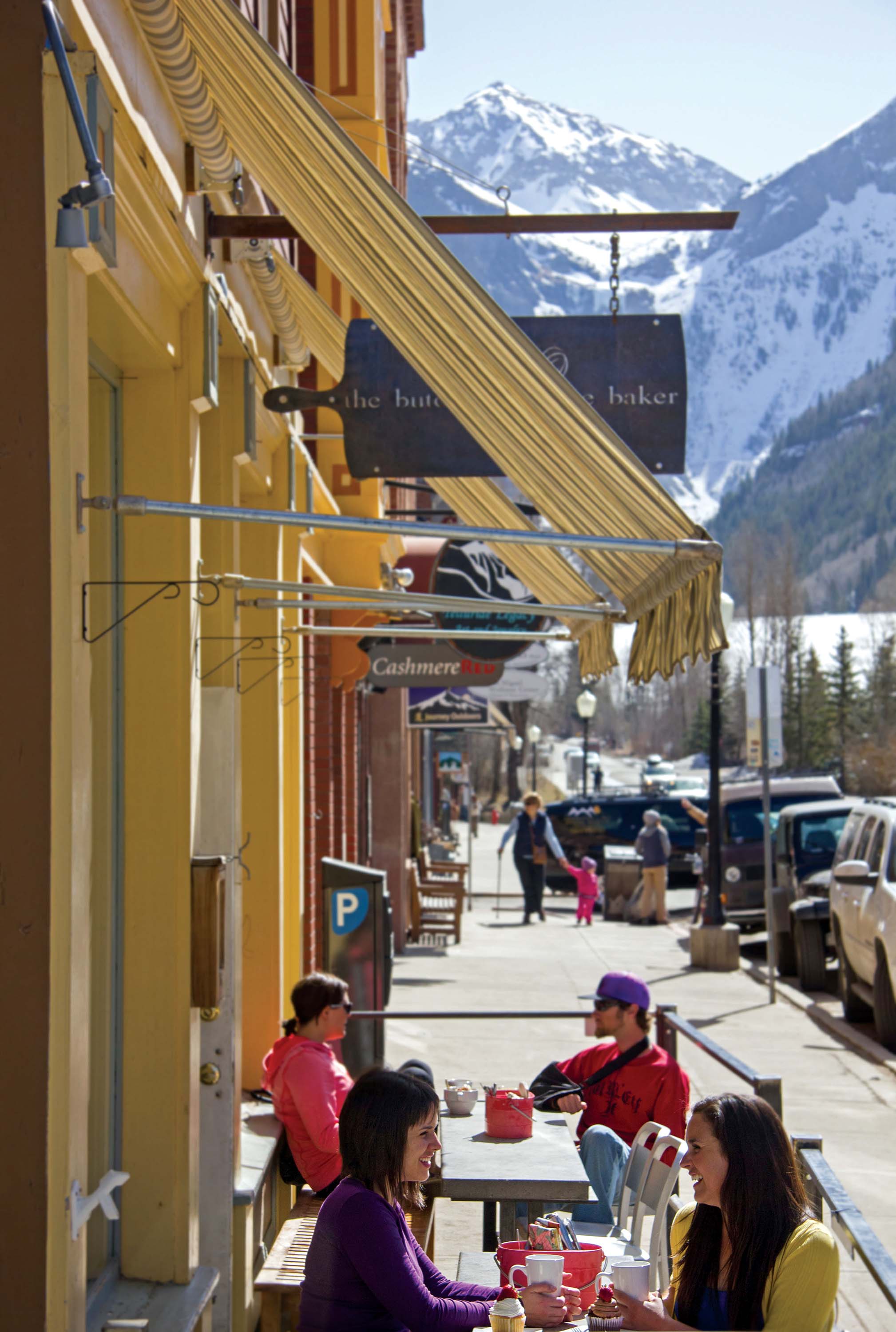 In telluride, year-round, it’s all about the outdoors. From sidewalk dining at the butcher & baker (top), and taking in good music at the town Park Festival (center) to soaking in the spectacular mountain vistas (bottom) this valley serves up in every direction, summer in telluride is a feast for the senses. 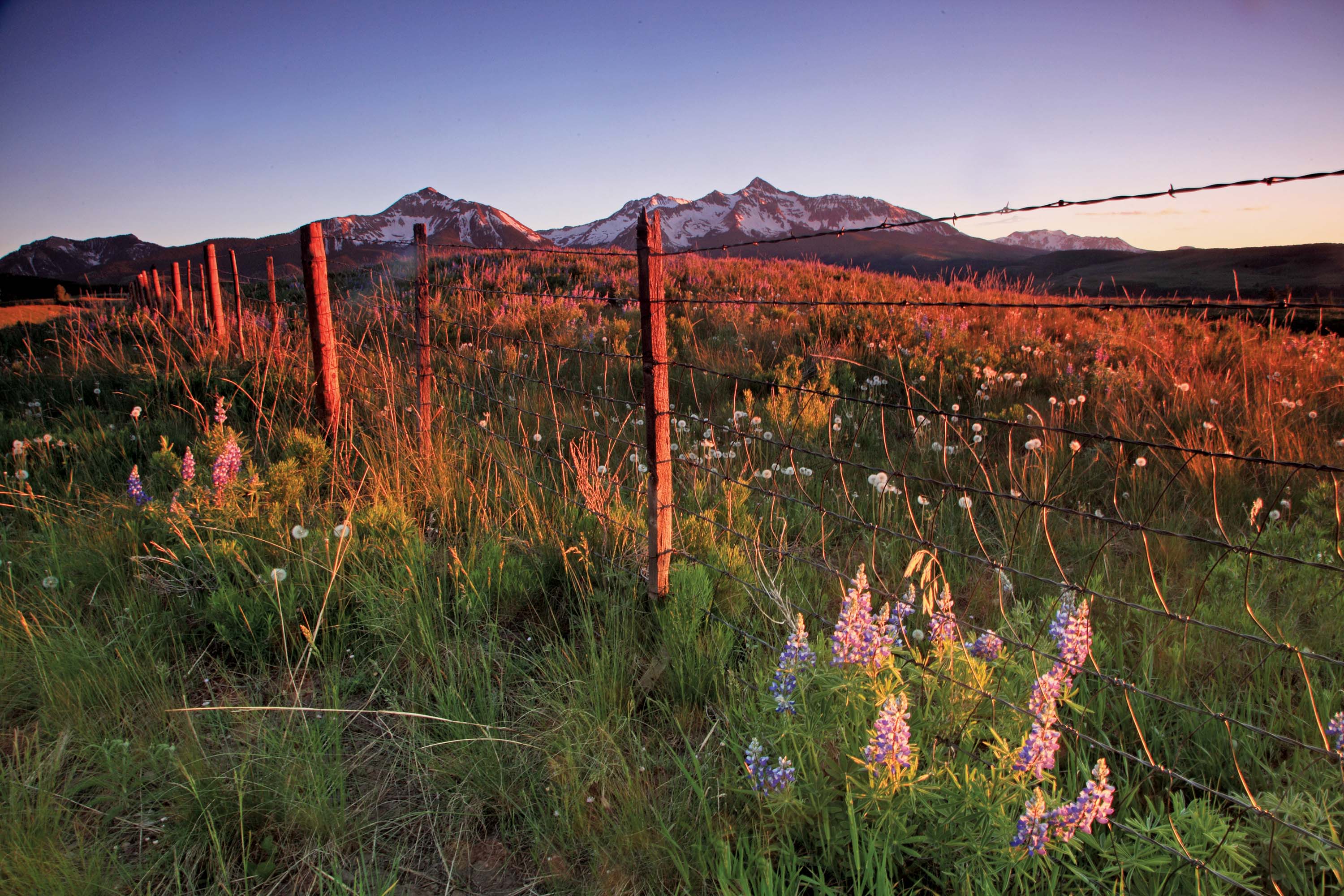 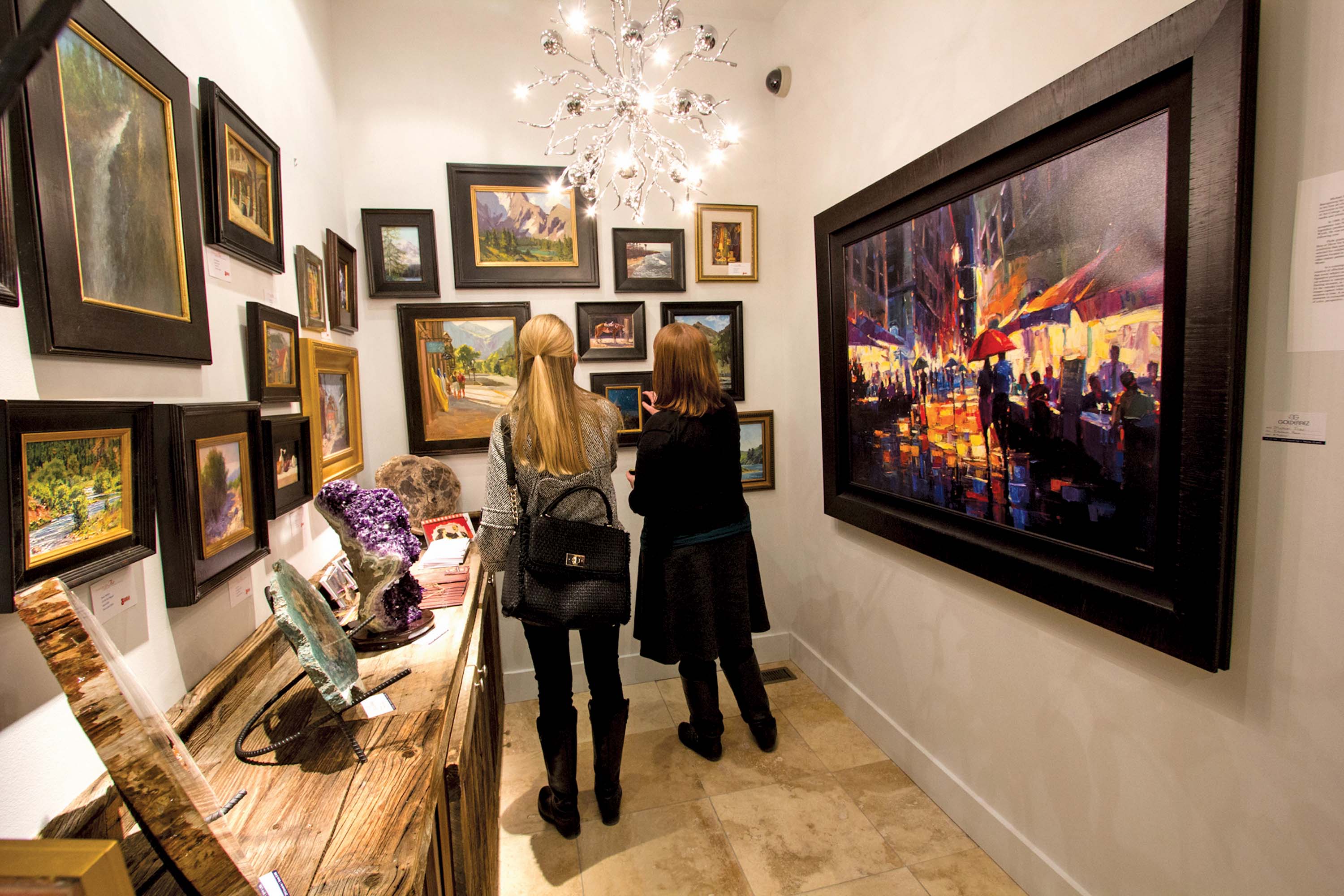 Thursday night art walks open up some 15 galleries and a number of eateries to collectors and browsers alike. 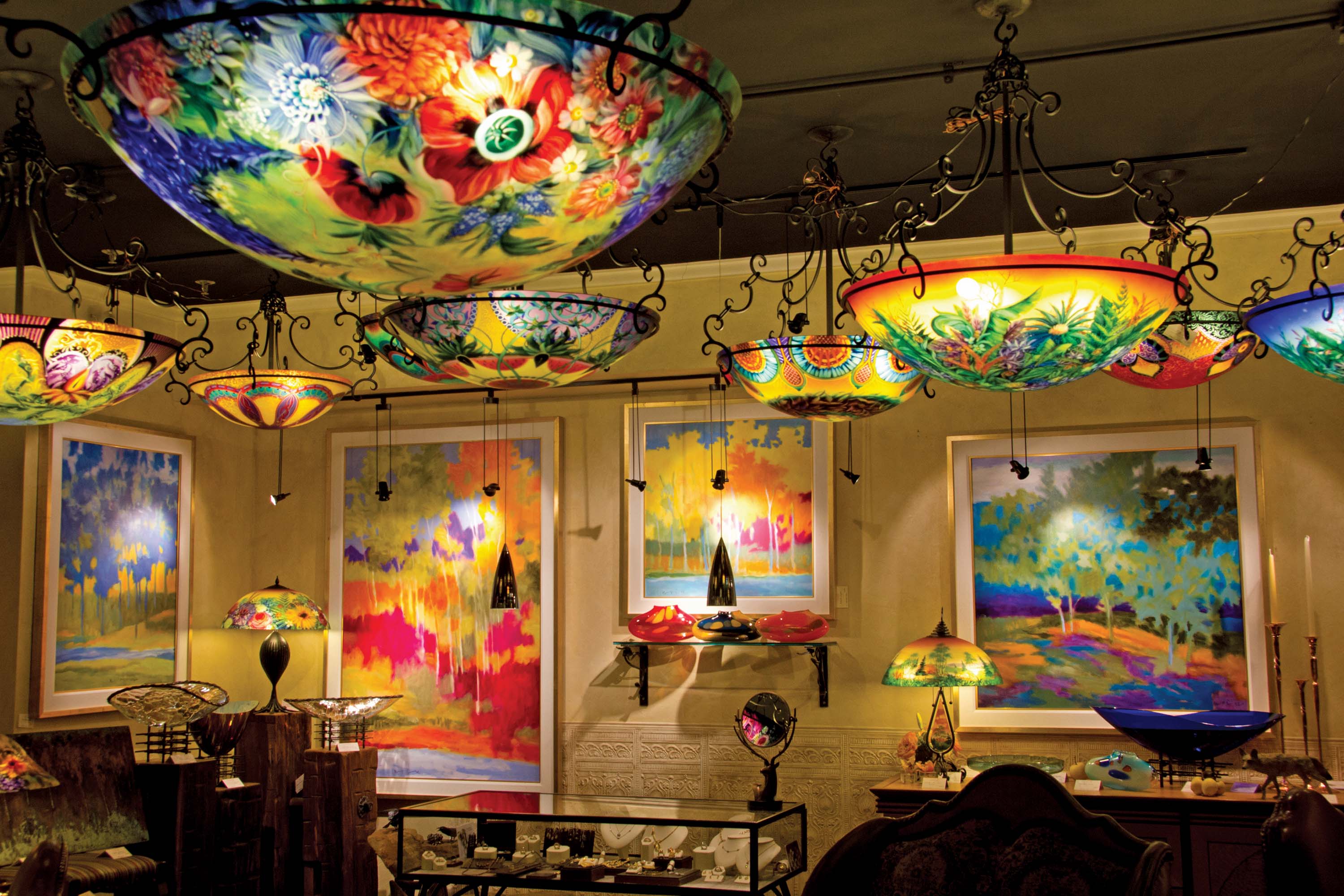 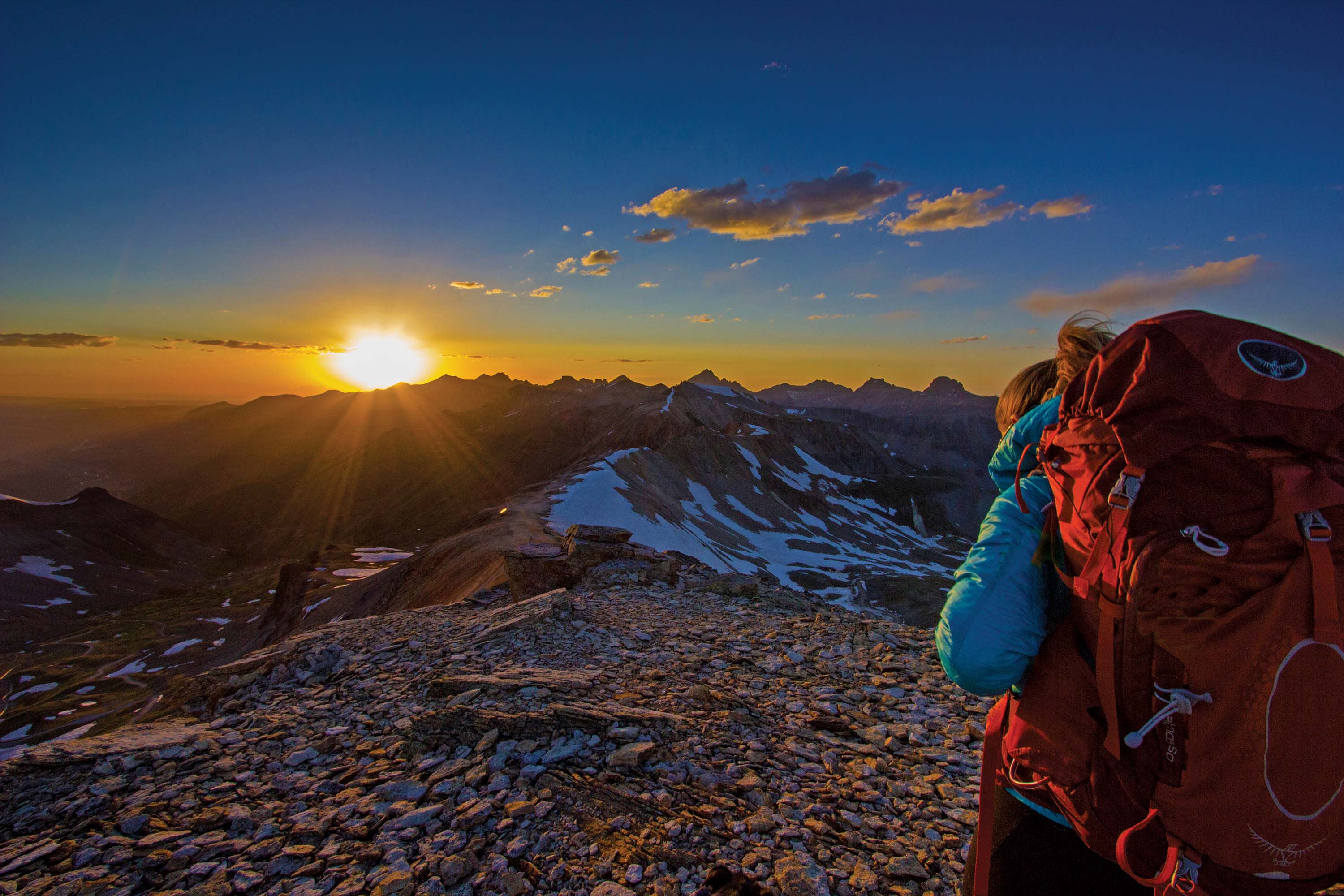 Hiking is just one way to appreciate telluride’s phenomenal sunsets.