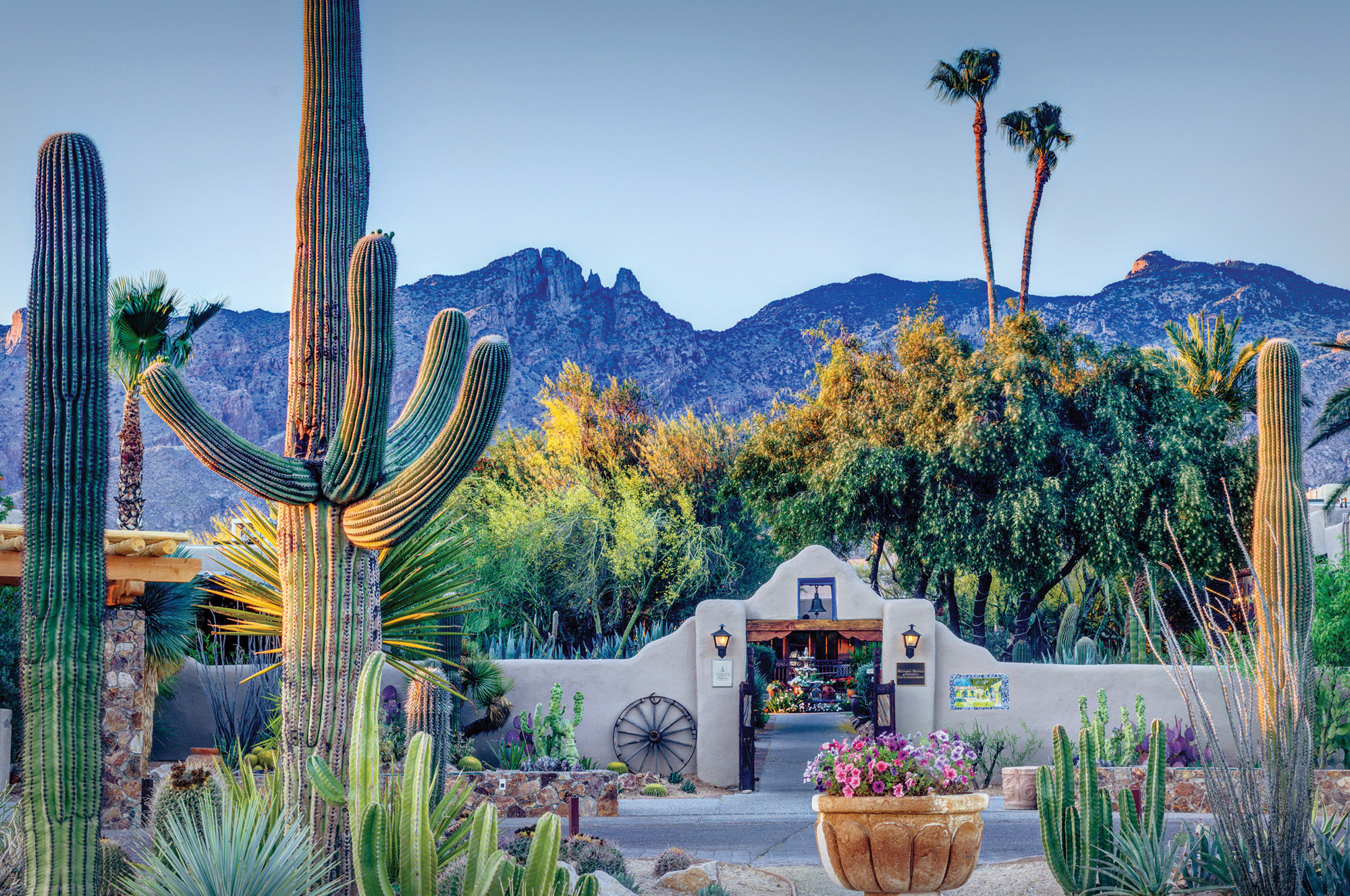 “Welcome to Hacienda del Sol, miss,” might have been the greeting a young lady from the East Coast heard after her long journey West in 1929. It’s likely she was handed a cowgirl hat to protect her from the hot Arizona sun and, shortly thereafter, assigned a horse.

Today, chances are one will still be greeted with a warm welcome, but visitors are less likely to be assigned a horse… unless, of course, they decide to spend their time riding the trails on the 35-acre property.

Hacienda del Sol, translated from Spanish to “Ranch of the Sun,” was originally a girls’ boarding school built by John and Helen Murphey in 1929. The school attracted students from families with familiar names — Pillsbury, Westinghouse, Vanderbilt and Kellogg, to name a few.

Now, the “Hacienda,” as locals refer to it, is a destination resort in the shadows of the Santa Catalina Mountains in Tucson, Arizona. It was appointed into the Historic Hotels of America under the auspices of the National Trust for Historic Preservation, joining 275 other landmark hotels such as the Grand Hotel on Mackinac Island in Michigan and the Gettysburg Hotel in Pennsylvania. “Each place has been inducted into this distinguished program based upon historic significance and its record of preserving authenticity, sense of place and architectural integrity,” says Lawrence Horwitz, executive director of the organization.

And the resort has earned the designation, especially in its rich architectural history. After a fire in the 1930s, the Murpheys hired architect Josias Joesler [1895–1956], an early practitioner of the Spanish Colonial Revival style, to rebuild and redesign sections of the ranch. (He ultimately designed 400 buildings in Tucson under the Murpheys’ patronage.) The architect was from Switzerland and came to the U.S. after he spent years designing structures abroad, including those in North Africa, Spain, Cuba and Mexico. His experiences in these countries help explain his knowledge of the Moorish nod in Spanish Colonial style.

Joesler designed the Hacienda as a Spanish Colonial Revival with curved archways and doors, hand-forged, wrought-iron elements and original hand-painted tiles that grace stuccoed walls. These tiles, known as “Mexican tiles,” decorate stairways and delight guests when they unexpectedly appear on sidewalks. Original adobe and brick remains preserved in a historic section of the resort.

In 1944, the Hacienda was converted into a guest ranch that immediately attracted the silver screen’s most notable stars, among them John Wayne and Clark Gable. Legend has it that Hacienda’s Casita Grande was the favorite hideaway of Spencer Tracy and Katharine Hepburn. At 2,000 square feet, it is still one of the most popular suites at the resort today.

In 1995, the Hacienda was purchased by a group of local investors who carefully renovated the property, transforming it into the luxury boutique resort that’s earned kudos from locals and visitors alike.

In 2015, the addition of 30 rooms, constructed in the spirit of the original hotel, expanded its capacity to 59 rooms. The new Catalina rooms, arranged as if they are a village, are spacious at 550 square feet each. Ten-foot ceilings make each room feel capacious with stunning mountain and city views. The furnishings are artlike, handcrafted of alder with hand-forged hardware. The accoutrements of Spanish Colonialism are present in the Talavera tile sinks in each suite, in the beams of the ceilings and the trim of the walls.

Well more than $1 million of art graces the Hacienda, both inside and out. Its gardens and lush desert grounds are filled with sculptures, including those by Jeff Timan, a partner of the Hacienda, whose welded steel sculptures feel as if they are an organic part of the landscape. Timan’s son, Zak, also adds to the ambiance of the dining room with his hanging glass pieces.

Santa Fe artist Carlos Carulo’s works, both paintings and sculptures, are part of the Hacienda’s collection as are works by Steven Derks, Rigsby Frederick and Ted Silverman. These artists’ works — many outdoors — delight guests as they explore the botanical offerings of the High Sonoran Desert, which includes a vegetable garden on the property.

The Hacienda’s Grill, established in 1997, firmly put the resort in a category of fine dining establishments, as noted by various publications, among them Wine Enthusiast Magazine, which honored it with an Award of Ultimate Distinction. The kitchen staff presents guests with delights from the garden and from the mature fruit trees on the property, including a rare variegated lemon tree. And with five sommeliers on staff, the Hacienda is noted for its extensive wine cellar, one of the finest in Arizona, housing in excess of 700 labels, and amounting to more than 6,000 bottles of wine.

Today, the Hacienda gifts its visitors with an ephemeral feeling of an era past but now returned… in grandeur and glory. 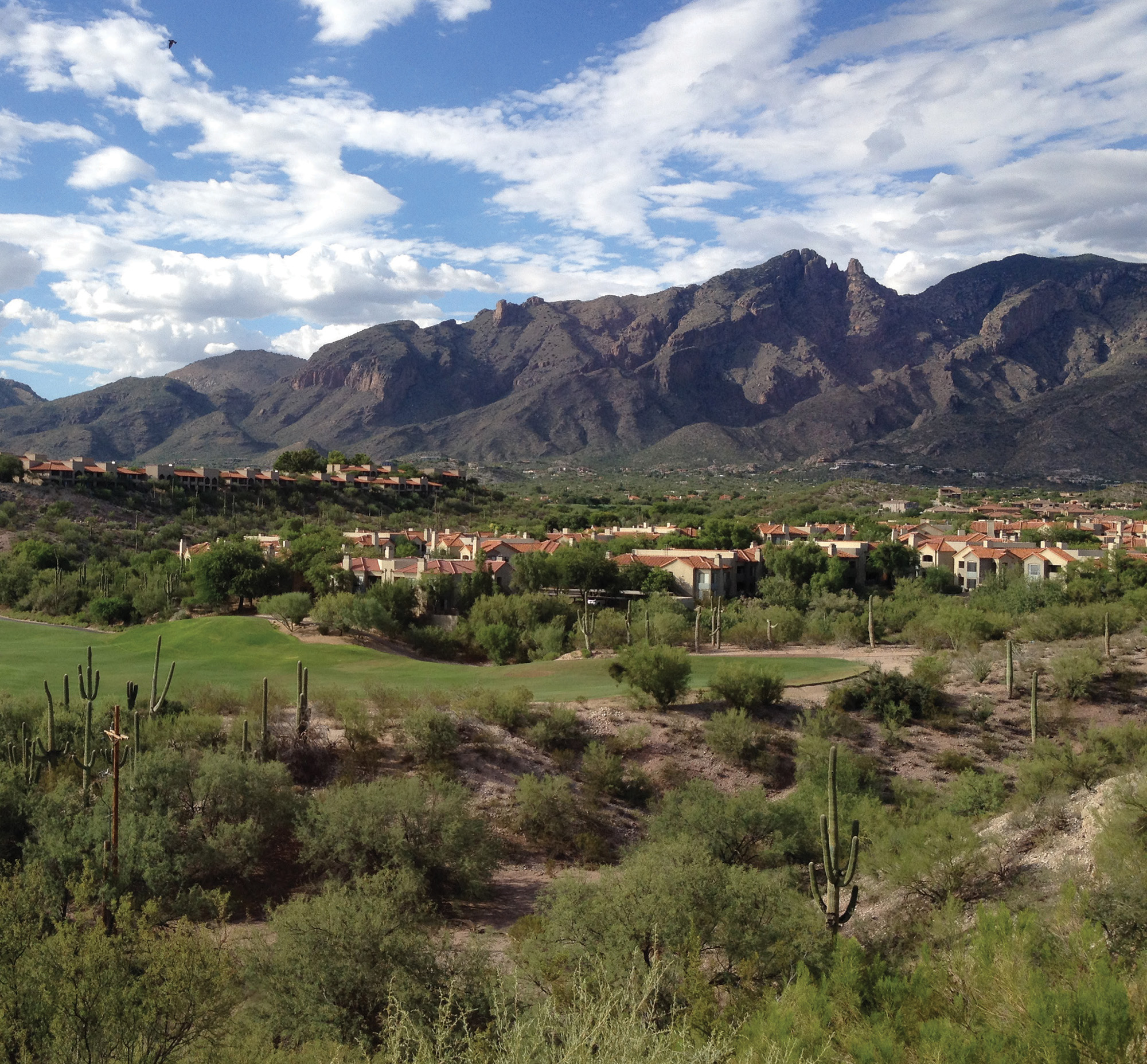 The Santa Catalina Mountains tower over the desert where the Hacienda resides. 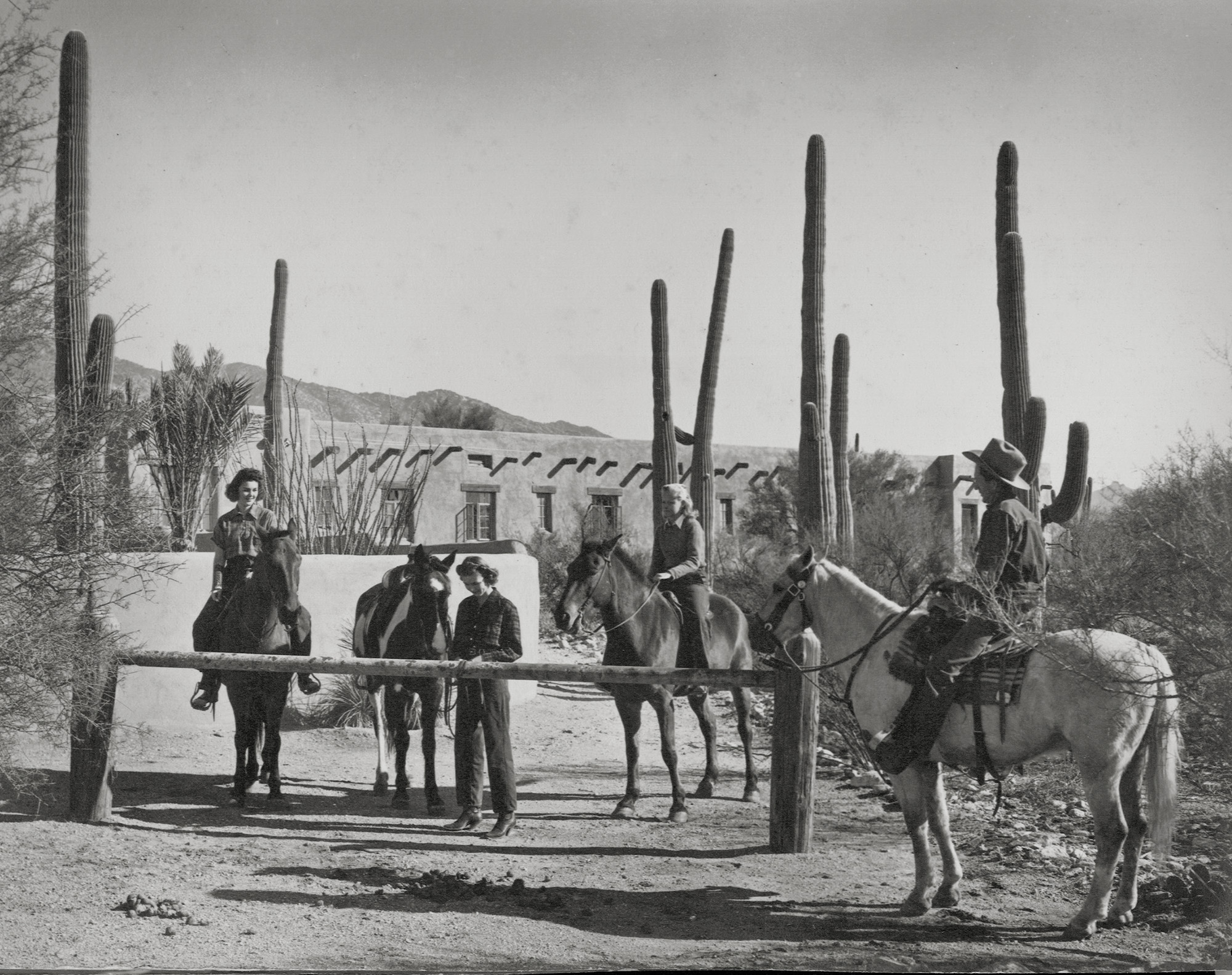 Horseback riding was a way of life for girls during their school year.

With spacious rooms, many spa services are available en suite. 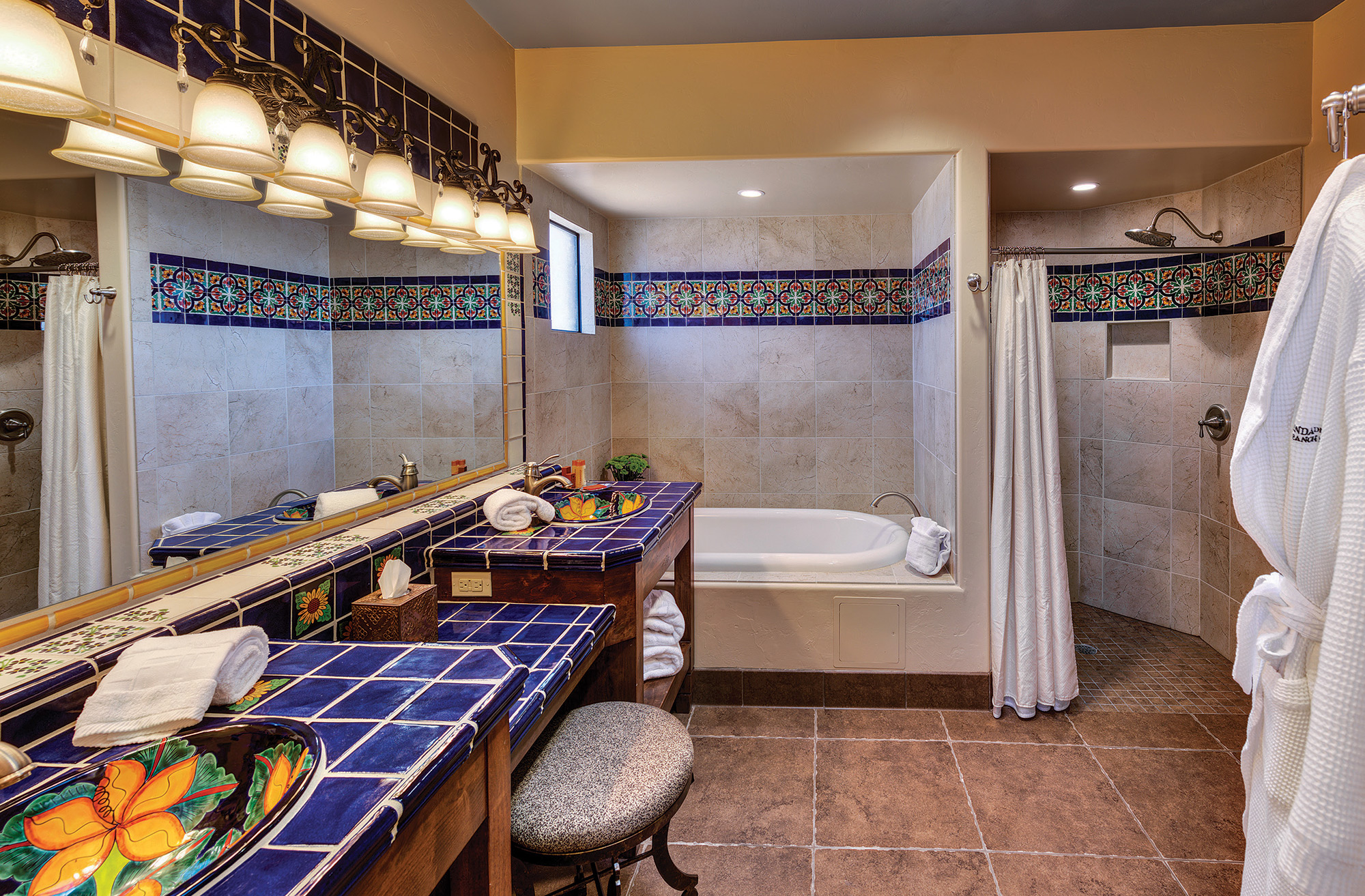 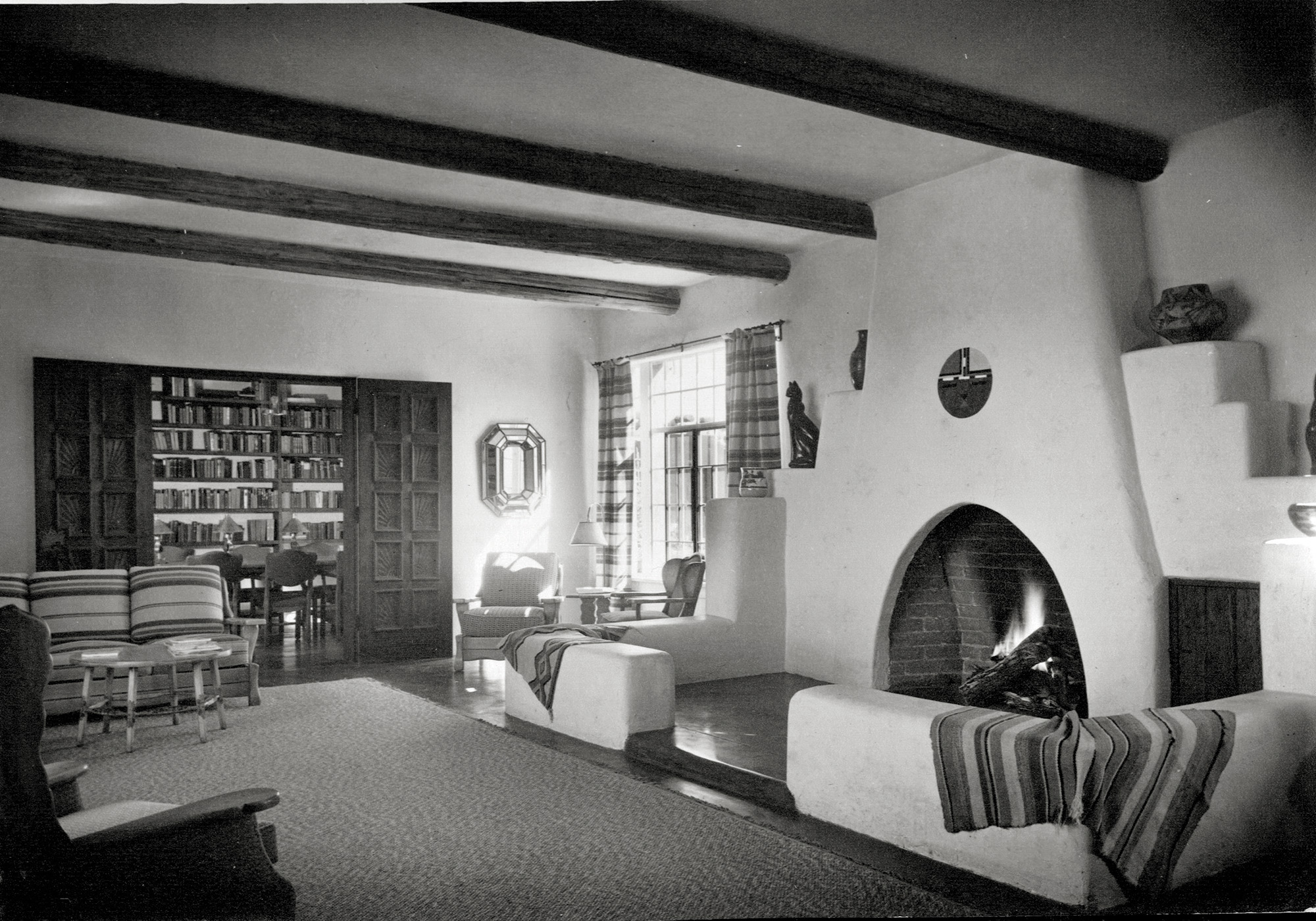 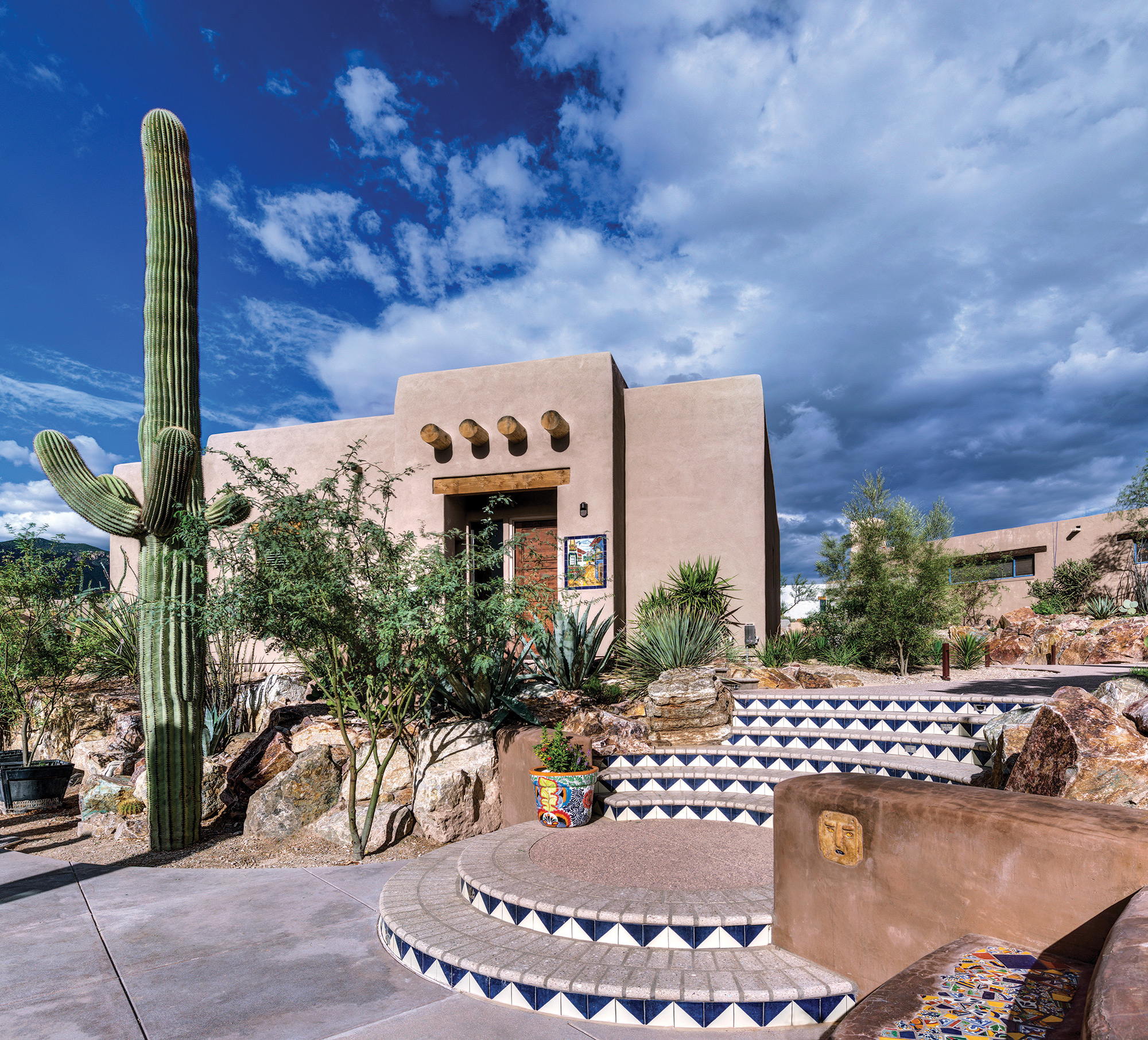 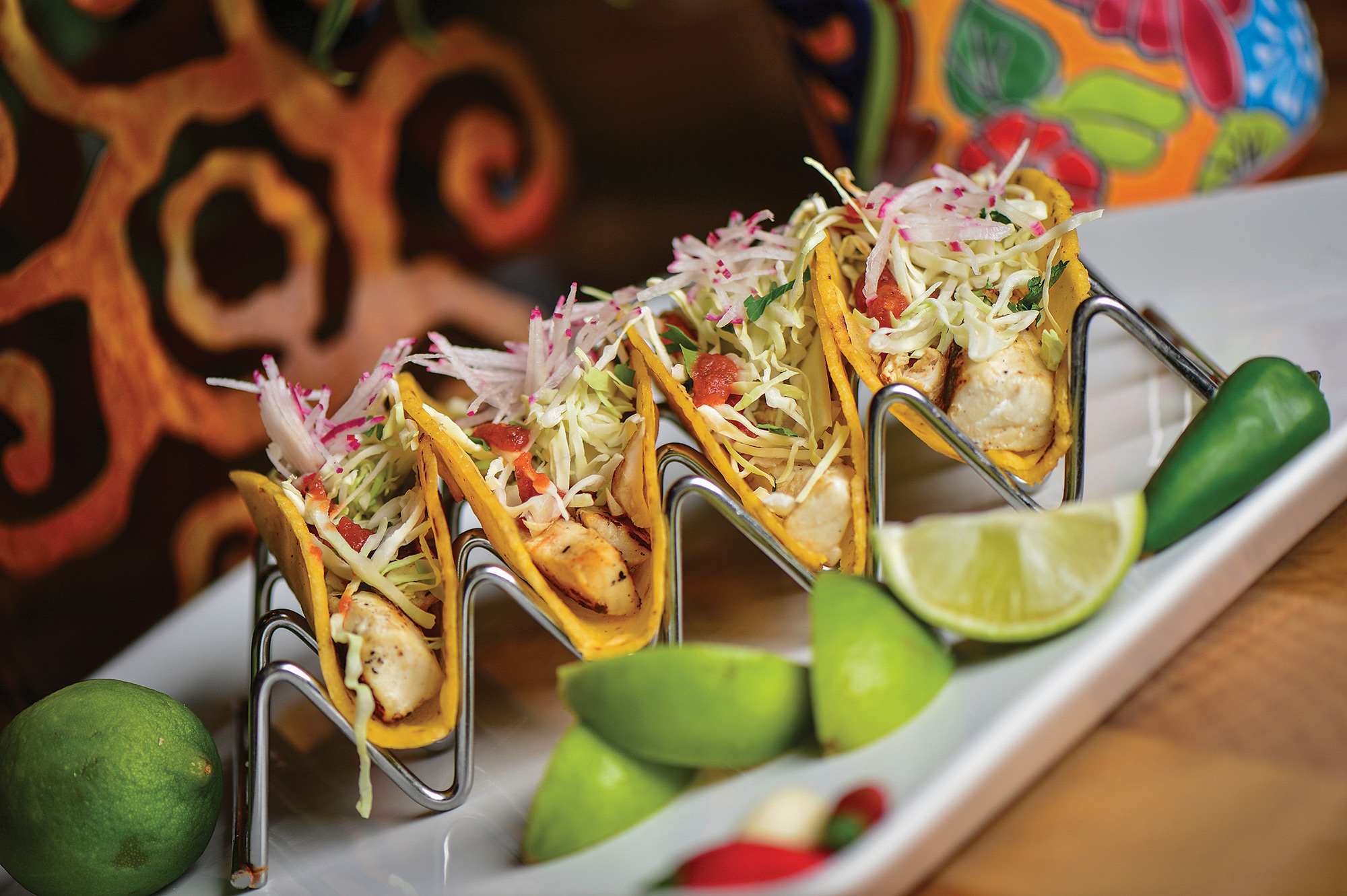 A bevy of creative chefs cater to every taste. These fish tacos are garnished with cilantro straight from their herb garden. All photos courtesy of Hacienda del Sol Guest Ranch Resort 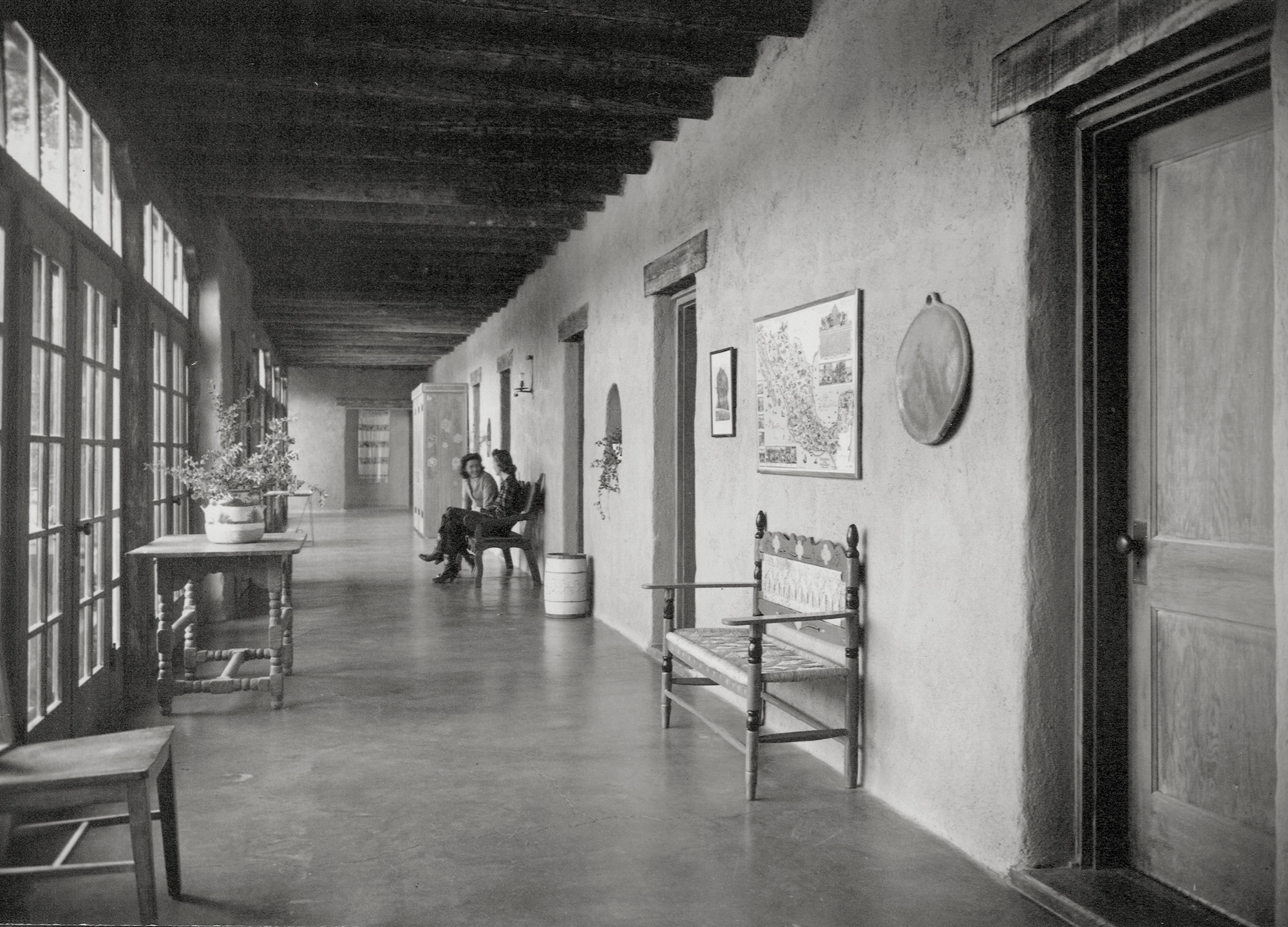 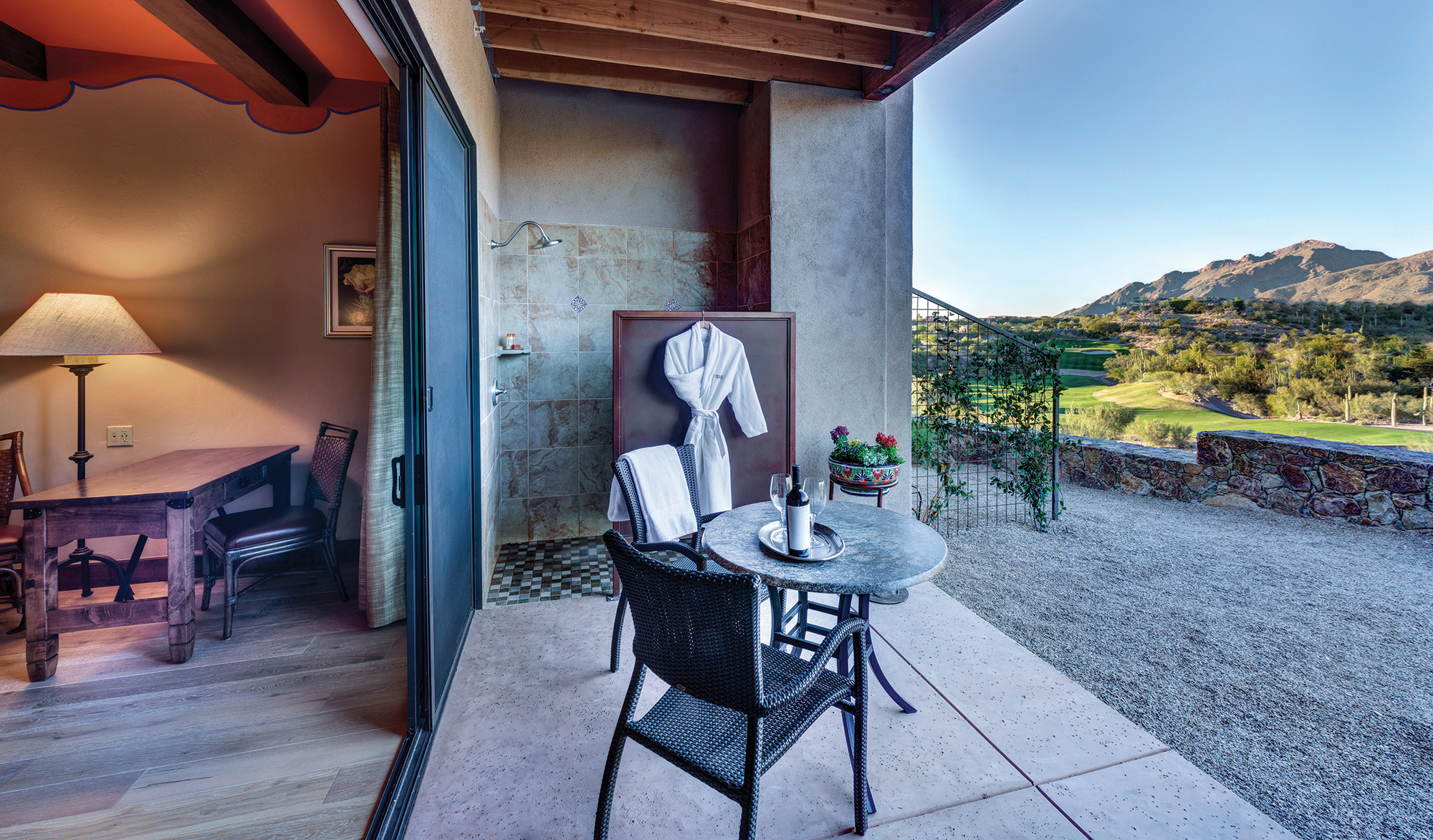 Every room has a view, whether it’s of mountains or Tucson’s city lights.