The original Presidio Barracks have been beautifully restored by the Presidio trust and now house its offices; a new restaurant, the Commissary; the Disney Museum and additional office space.

Brigadier General Frederick Funston, commander, Presidio of San Francisco, Cosmopolitan Magazine, July 1906: “I was living with my family at 1310 Washington Street, near Jones, one of the most elevated parts of the city, and was awakened by the earthquake shock at 5:16 a.m. on that never-to-be-forgotten 18th day of April.”

With federal troops from the Presidio, Funston helped build the famous tent cities that housed many of the survivors, and his wife, Eda, worked with the nurses at the fort’s Letterman Hospital to treat the wounded.

Topping the list of candidates to lead America’s Expeditionary Force in World War I, Funston [1865–1917] died weeks before Congress declared war on April 6 — and General John J. ‘Black Jack’ Pershing got the job.

Amidst groves of eucalyptus and cypress trees, the four-bedroom Funston House opened in July 2013 as an addition to The Inn at the Presidio, which debuted in April 2012 as the first hotel at the Presidio, a National Historic Landmark in the Golden Gate National Recreation Area.

Minutes from downtown San Francisco, the 24,800-square-foot property, built in 1903, is a pleasant 15-minute stroll across the Presidio parade grounds and walkways to the Golden Gate Bridge. And, just over the historic span north is Marin County and wine country. The Inn at the Presidio combines historical architecture with comfortable, contemporary furnishings, a significant art collection and a stunning natural setting.

Comprising three floors and a basement, the 21-room inn was originally purposed as the unmarried officers’ quarters until the extensive renovation began in 2011 by The Presidio Trust.

The Trust was created by Congress in 1996 and dually charged with rehabilitating and repurposing the historic buildings and environmental resources as well as operating the Presidio as a vibrant public park. Almost 3 square miles, the site was originally founded by the Spanish in 1776 as one of the many forts they established throughout the country.

Dating to 1889, when the building was an Army officer’s residence or “quarters,” Funston House has been meticulously renovated by The Presidio Trust to combine contemporary style and comfort — including ultraluxury beds, Wi-Fi and flat screens — while maintaining the integrity of the inn’s Greek Revival style.

Funston House, which can be booked entirely or by individual rooms, sleeps up to eight in three bedrooms and one master suite. Common areas include a living room, dining room, kitchen, outdoor patio and porch. A neutral palette of colors and fabrics with contemporary touches and finishes was created by BraytonHughes Design Studios in San Francisco, which previously completed the interior design at the inn.

Julie Coyle Art Associates of Sausalito, California, incorporated artwork — including photography and original paintings — celebrating the history of the Presidio. Some works are part of collections that continue throughout the property.

“The Presidio Trust made it very clear from the beginning that our mission with the art program at the inn was to encourage the hotel guests to go out and explore the Presidio,” says Coyle, an artist and art consultant who tells stories through art and objects in public projects, especially hotels.

For example, welcoming visitors in the foyer of Pershing Hall, the main part of the inn, is a focal-point collection of 18 bugles dating to the Civil War, including Union and Confederate examples.

Also displayed are a 33-rpm record of bugle calls, 1917 cavalry spurs and horse tack and a number of pieces from the Presidio salvage yard, which also yielded the inn an old directory, a crest that once hung at the Officer’s Club and a large frame repurposed as a dining-room mirror.

“The artwork in the Funston House is an extension of what we did at the inn, but with a slightly softer, more feminine approach,” she says. Following the procedure at the inn, each guest room includes a photograph of a place to discover within the Presidio as well as historical images, many from the Presidio’s National Park Service-managed archive, and nature shots taken within the Presidio. In all, there are 80 pieces of artwork at Funston House.

A Coyle employee, Marin County’s Michael Kirkbride, created an oil painting portrait of Major Dana Crissy, for whom Crissy Field at the Presidio is named, from a historical archive photo of the airman. The portrait hangs above the living room fireplace in a place of honor.

Another portrait in Funston House is of Charles Young [1864 – 1922], a Buffalo Soldier who, the son of slaves, became just the third African American to graduate as a West Point cadet and be commissioned as an officer. He served as 9th Calvary Company commander in 1903 at the Presidio. In the foyer hallway, the portrait of the distinguished 37-year career soldier comprises 1-inch black-and-white magazine squares selected and assembled by Coyle.

In the dining room are 1920s and ’30s plates typical of what may have been used by the families at the Presidio. These have been mounted on white linen. Here, too, a butterfly collection is shadowboxed. “Because we did not want to use actual butterflies, we repurposed Presidio annual report and trail guides cut into butterfly shapes,” she says.

Also included are photographs of Presidio flora by Marin County’s Calvin Smeltzer and landmarks by Chere Pafford, of Sonoma County. Coyle used old Presidio keys, too, including those for the jail house — to make guests feel securely at home.

“Funston House offers guests the experience of a charming cottage in the woods for those who prefer renting private residences,” says the inn’s general manager, Terry Haney. “It has become one of San Francisco’s most in-demand lodging choices for families, friends, reunions and weddings,” he adds. “It’s private and offers pure pleasure in the Presidio.” 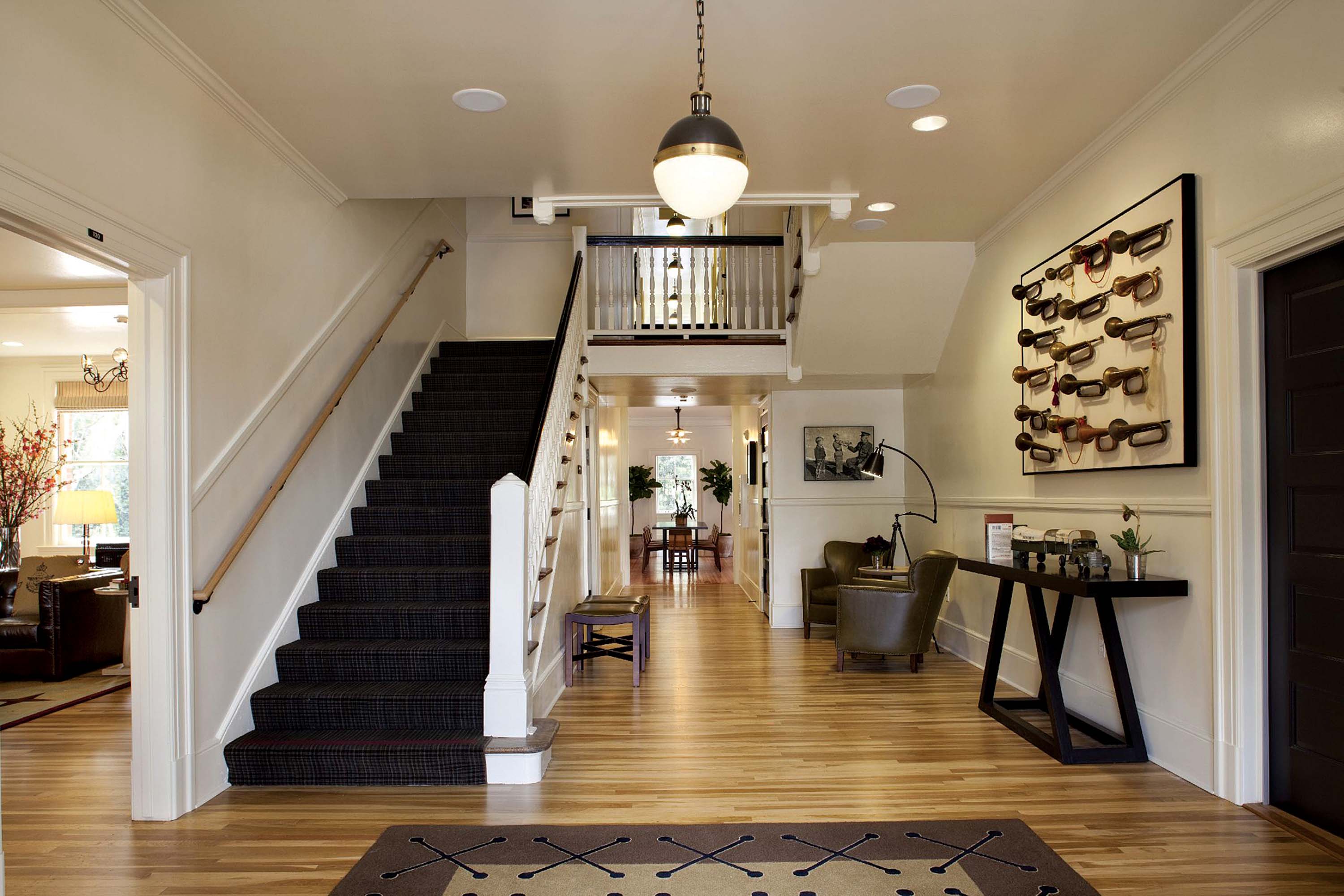 In the foyer of The Inn at the Presidio, guests are greeted by the art and artifact component of the experience, in this case a collection of bugles dating to the Civil War. 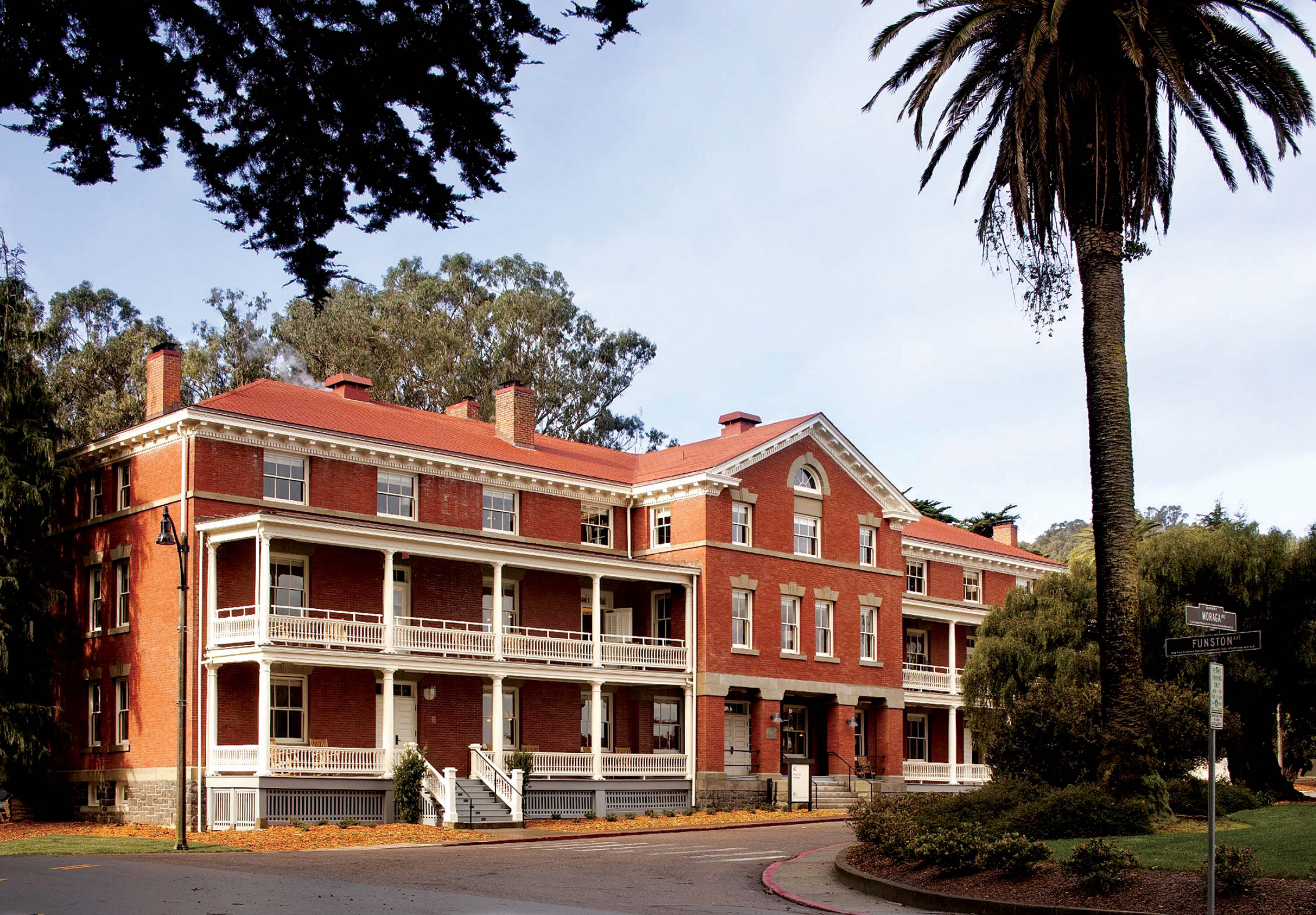 The Inn at the Presidio opened in 1903 as the unmarried officers quarters, and today married people are also enjoying its change-of-pace combination of hospitality and history. 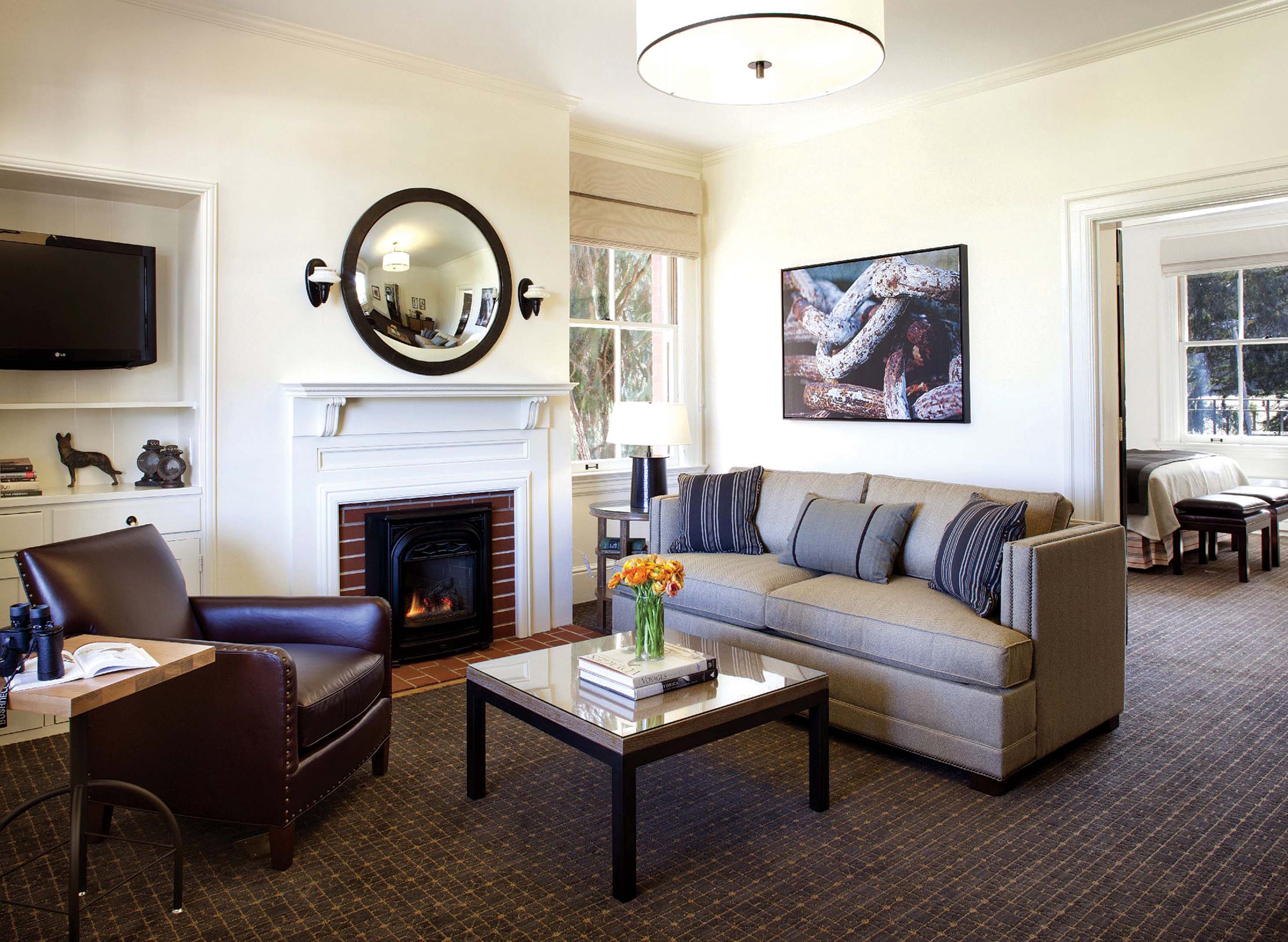 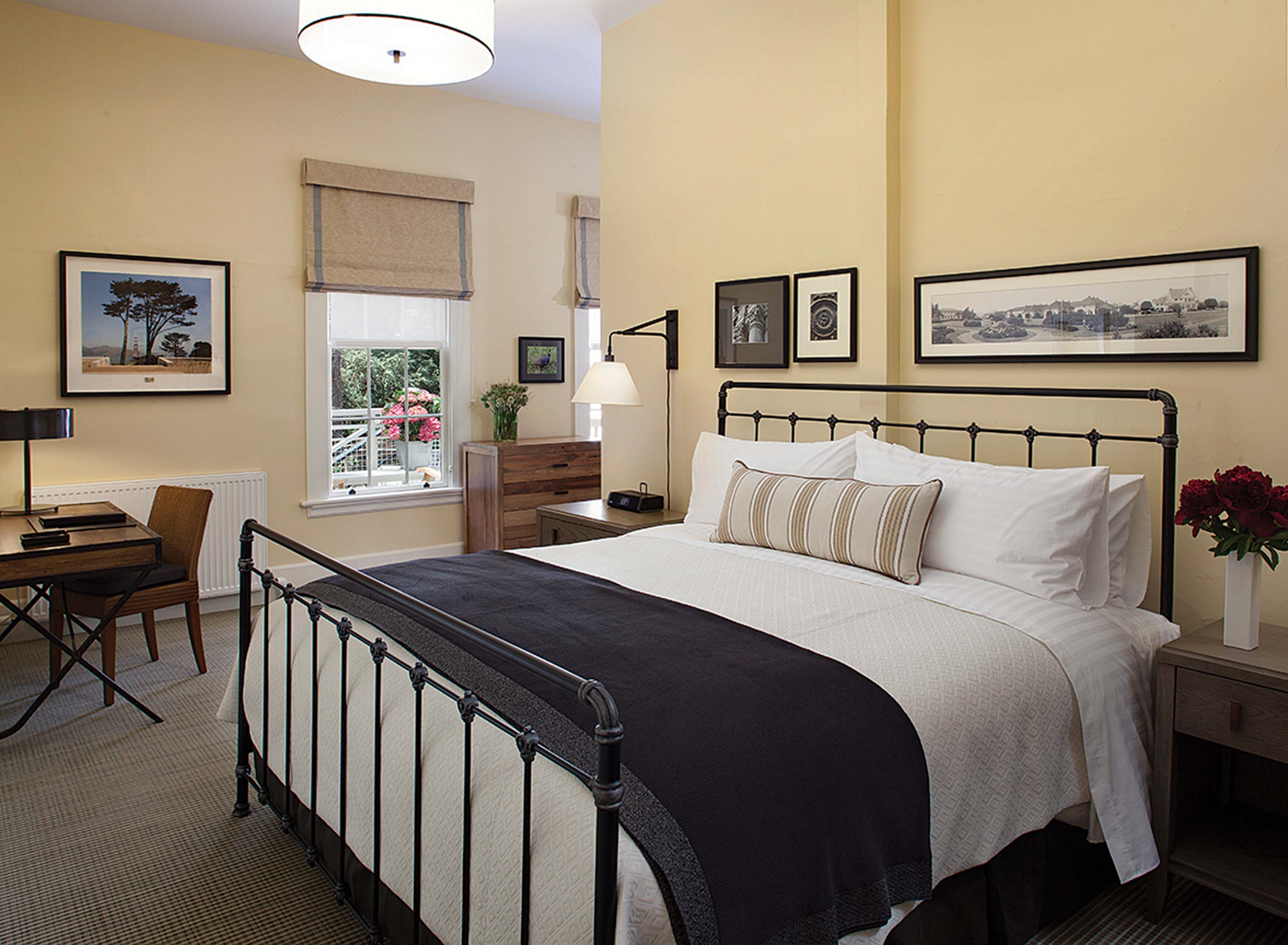 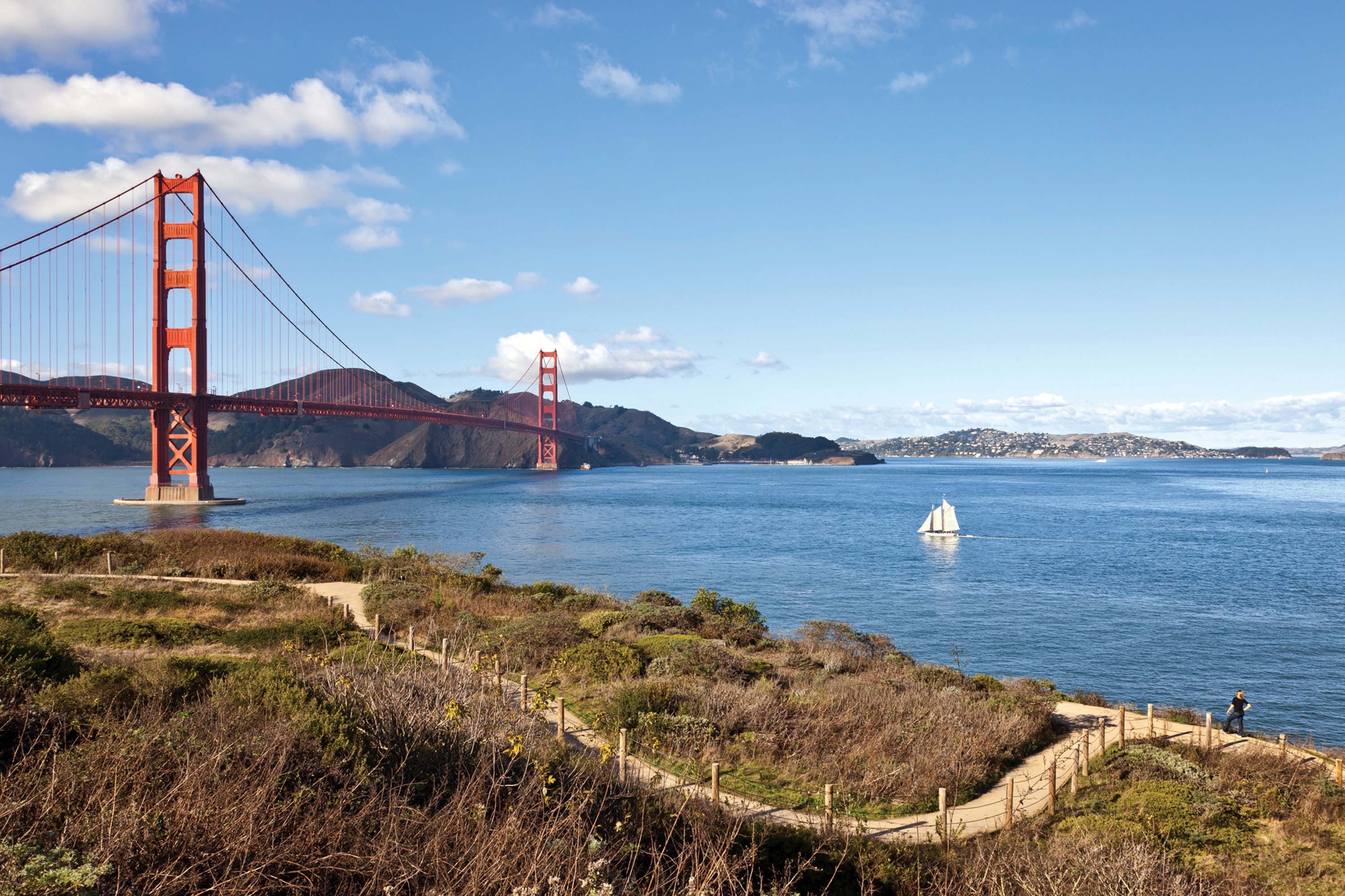 The Golden Gate Bridge is an inspiring 15-minute walk from the Inn at the Presidio and Funston House. From the third floor of the inn, you even have views of the landmark.