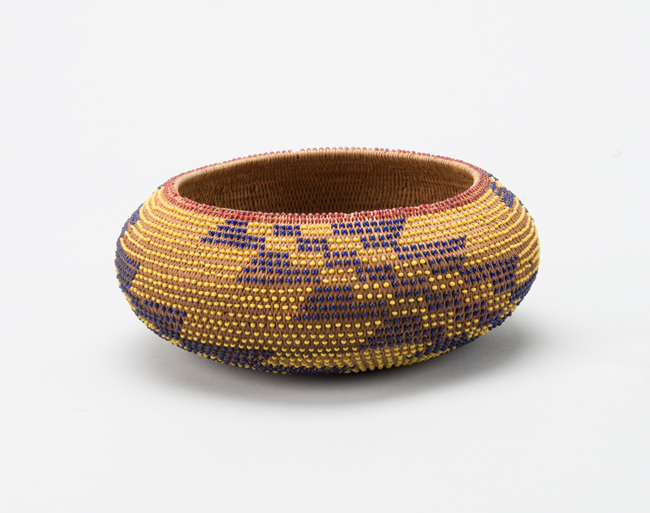 A new exhibition at the Eiteljorg Museum in Indianapolis showcases the work of some of the most admired Native American basketmakers while celebrating two of the museum’s most generous supporters: Mel and Joan Perelman.

The Perelmans recently gifted to the museum their collection of 147 baskets, cradles and bags spanning much of North America, with a focus on the Southwest and Far West regions. A selection will be featured in a special exhibit, Interwoven: Native American Basketry from the Mel and Joan Perelman Collection, that opens in the museum’s Paul Gallery on Saturday, April 14, and continues through August 5. 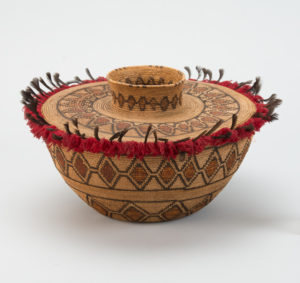 “The Eiteljorg Museum has benefitted profoundly from the generosity of Mel and Joan Perelman over the past two decades,” Eiteljorg President and CEO John Vanausdall said. “Their exquisite judgment in collecting fine art of Native America and the West is reflected in this outstanding collection, representing many cultures, that the public will be fascinated to see. In light of the extraordinary quality of this basket collection, it’s appropriate that we share it with the public.”

As art collectors who sought out fine art during their travels to the Southwest, the Perelmans developed a deep appreciation for the technical and creative skills of Native basketry artists, which led to collecting other art forms, such as Katsina carvings and pottery. A previous Eiteljorg exhibit, Spirited Connoisseurs in 2004, featured Western paintings and Native art the Perelmans had collected. 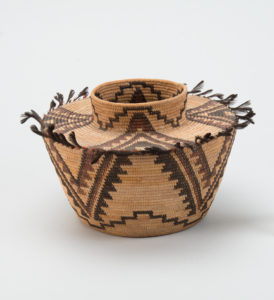 Native baskets in the Interwoven exhibit are primarily the works of women artists, including Louisa Keyser (Washoe), Lena Dick (Washoe), Elizabeth Juan (Tohono O’odham), Lucy Telles (Paiute), Magdelena Augustine (Chemehuevi) and others, some whose names were not recorded. The baskets reflect the knowledge of materials, techniques and designs passed down through multiple generations that contributed to the survival of many Native cultures despite dramatic and traumatic transitions of the late 19th through early 20th centuries.

While the collection is mainly of baskets, it also encompasses Lower Klamath River basketry hats and other forms of woven items such as a Hoopa cradle and Nez Perce twined bag. The Perelmans also collected the work of living artists from numerous communities who continue the traditions and innovations seen in earlier works.

The Perelmans are among the Eiteljorg’s most active supporters, and Mel Perelman serves on the museum’s board of directors. The museum’s expansion wing, which was built in 2005 and doubled the size of the building, is named in honor of them.

To recognize Mel and Joan Perelman for their support of Native fine art and philanthropic endeavors for the museum, the Eiteljorg will host a special gala celebration Thursday, June 21. For information about tickets and reservations to the gala, please contact Mary Whistler at mwhistler@eiteljorg.com or 317.275.1316.

Visitors who see the Interwoven exhibit also can experience the Eiteljorg’s ongoing special exhibition, The Reel West, about the cultural influence of Hollywood Westerns. Both exhibits are included with regular museum admission, and Eiteljorg members are free.