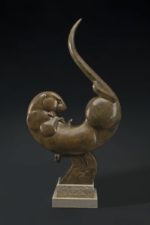 Tim produces sculptures which not only attract the viewer’s eye but also the viewer’s hand. Born in Calgary, Alberta in 1965, Tim grew up in Nelson, a town located among the rugged Canadian Rockies in southeastern British Columbia. This is where he developed a love of wildlife and the outdoors. Escaping into the wild was then, and still is, a spiritual experience. At sixteen Tim began working summers as a cook and wrangler for a hunting outfit, which took him into the wilderness country of northern British Columbia. By the time Tim was eighteen he was guiding his own clients on two week trips.