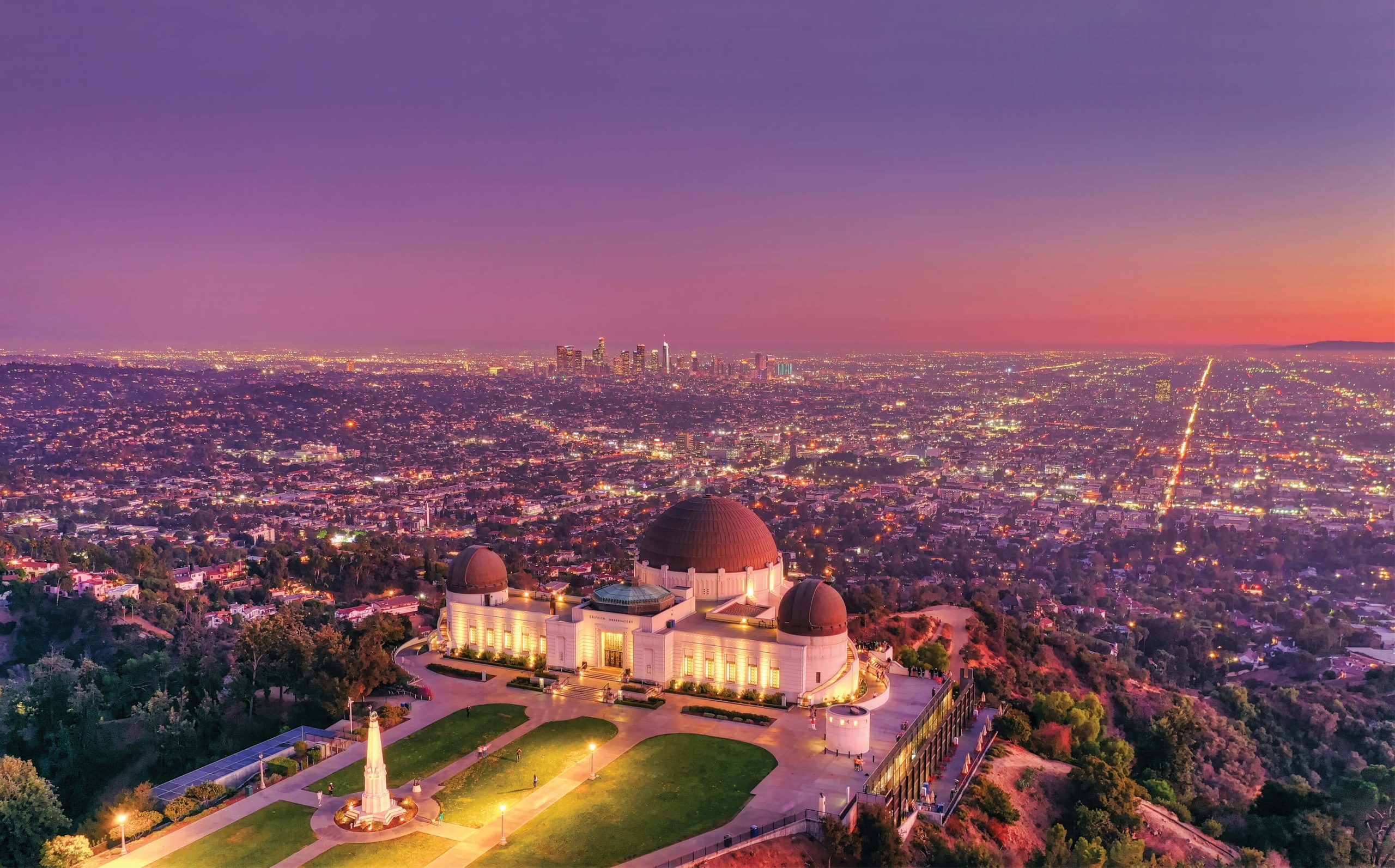 11 Jul Wanderings: Angels in the Architecture

Los Angeles boasts among the richest troves of public Art Deco architecture in the nation. With its well-crafted bold geometries and bright colors, the style emerged at the 1925 International Exhibition of Modern Decorative and Industrial Arts in Paris, France, and made its way around the world. Art Deco suited brashly booming L.A., whose architects often added their own embellishments. 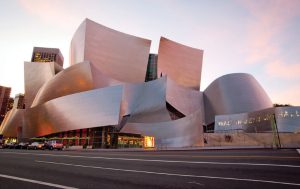 Two historic preservation organizations — the Los Angeles Conservancy and the Art Deco Society of Los Angeles — offer Deco-themed tours and events. In addition, we’ve compiled this self-guided three-day architectural tour of historical buildings. Focusing on three areas of the city, it offers an opportunity to indulge in this distinct style and gain a better understanding of L.A. 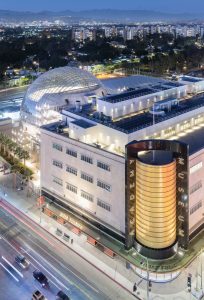 At the corner of Wilshire and Fairfax, the Streamline Moderne May Company Building was reimagined as the long-awaited Academy Museum of Motion Pictures in 2021. Photo by Iwan Baan, Courtesy Academy Museum Foundation

The historical hub of Downtown makes an ideal first destination. Begin at the grand palace that has welcomed people by the trainload for 83 years: Union Station Los Angeles (1939, Parkinson & Parkinson). This eloquent amalgam of Moorish, Spanish Colonial, Mission Revival, and Art Deco architecture has appeared in many movies, including “The Way We Were,” “Bugsy,” and “Catch Me If You Can.” 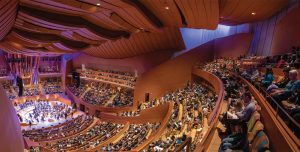 A short stroll leads to Los Angeles City Hall, completed in 1928 by a consortium of local architects. Its iconic 28-story pyramid-topped tower will be familiar to anyone who recalls the opening credits of the TV series “Dragnet.” Must-see features include a 135-foot-wide rotunda with 46 types of marble; the stately City Council Chamber; the 26th-floor mayoral portrait gallery; and the 27th-floor observation deck’s panoramic views. 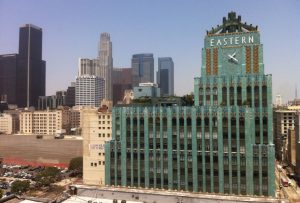 Next, head to Los Angeles Central Library (1926, Bertram Goodhue). The square-block structure evokes an ancient temple of learning, its history chronicled in Susan Orlean’s recent bestseller The Library Book. Expanded in 1993 with an eight-story atrium, the 540,000-square-foot library features a soaring rotunda — with 9,000 square feet of murals depicting California history by Dean Cornwell — and a peaceful 1.5-acre public garden. 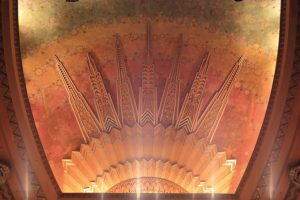 While you could happily spend all day at the Central Library, allow time for a 20-minute walk to the nearby Eastern Columbia Building (1930, Claude Beelman). Wonder at its 13 stories of steel-reinforced concrete clad in terracotta tiles glazed in shades of turquoise and trimmed in gold. 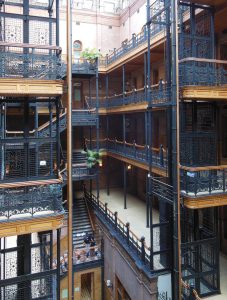 Young architectural draftsman George H. Wyman was inspired by a description of a futuristic building circa 2000 in Edward Bellamy’s novel Looking Backward, resulting in the wood-and-wrought-iron atrium of the 1893 Bradbury Building. Photo courtesy of L.A. Conservancy/Annie Laskey

Once you’ve refueled, continue your creative journey with a stop at The Broad, a contemporary art museum that opened in 2015 and features works by Jean-Michel Basquiat, Roy Lichtenstein, Kara Walker, Andy Warhol, and Christopher Wool, among many others. Then seek serenity in the postmodern Cathedral of Our Lady of the Angels (2002, José Rafael Moneo). Designed by the Spanish architect, this contemporary cathedral has virtually no right angles, which imparts a sense of mystery. 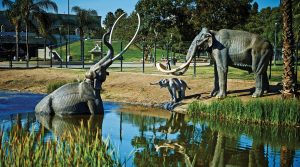 Less than half a mile east of the Academy Museum on Wilshire, the La Brea Tar Pits trapped now-extinct mammals, including saber-tooth cats, giant sloths, and wooly mammoths, from about 38,000 years ago. The fossilized skeletons are now on view in an adjacent museum. Photo courtesy of La Brea Tar Pits

End your day Downtown with a Los Angeles Philharmonic performance inside the swooping, gleaming stainless-steel forms of Disney Concert Hall (2003, Frank Gehry) or a show across the street at the Music Center (1964, Welton Becket & Associates). 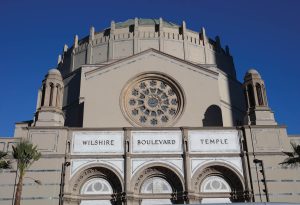 Since 1929, Wilshire Boulevard Temple — inspired by Byzantine architecture with Art Deco flourishes — has served as a vital spiritual and cultural center for the city’s Jewish community and Los Angeles at large. Photo courtesy of L.A. Conservancy/Adrian Scott Fine 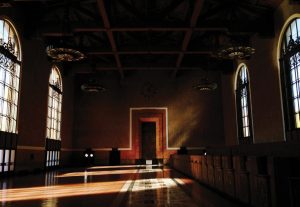 With its broad expanses and towering ceilings detailed in marble and tile, Union Station, dating to 1939, is widely considered to be the last of the grand train stations built during the age of railway travel. Photo courtesy of L.A. Conservancy/Adrian Scott Fine 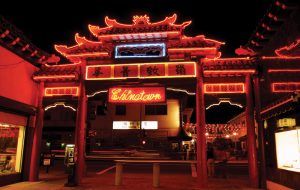 Though some of the welcome gateways to L.A.’s extensive Chinatown quaintly recall the past, the area is a thriving community of more than 37,000 people. Photo courtesy of L.A. Conservancy Archives 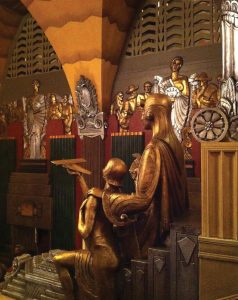 During a renovation of the Pantages Theatre completed in 2000, some 85,000 square feet of gold, silver, copper, and bronze leafing were applied to the ornate interiors, including the Art Deco statuary in the lobby. Photo courtesy of L.A. Conservancy/Adrian Scott Fine

Two miles further west along Wilshire is the “Miracle Mile,” a stretch between La Brea and Fairfax avenues, developed in the late ’20s and ’30s. You’ll spy several Art Deco buildings here, though many have disappeared or are in disrepair. But your main destination, just past the La Brea Tar Pits & Museum (the world’s largest deposits and displays of Ice Age fossils) and the now-under-expansion Los Angeles County Museum of Art, is the latest repurposing of an L.A. Art Deco landmark: the May Company Building (1939, Albert C. Martin and Samuel A. Marx). Originally a Streamline Moderne department store, it was recently refurbished to its original glamor and was renamed the Saban Building as the permanent home of the Academy Museum of Motion Pictures. Inside, find state-of-the-art exhibits on cinematic arts and memorabilia. A gigantic spherical, glass-domed extension by project architect Renzo Piano houses a 1,000-seat theater and a city-view terrace. After a film screening, enjoy dinner at the museum’s restaurant, Fanny’s, which serves contemporary cuisine with a touch of Hollywood glamor. 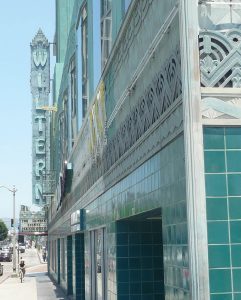 Plan your third day for a Friday, Saturday, or Sunday, to ensure access to the grand finale. Begin on Hollywood Boulevard — with its well-known Hollywood Walk of Fame honoring entertainment legends — near the Chinese Theatre (1926, Meyer & Holler), an extravagant Asian fantasia inside and out. The best way to appreciate the interior is to see a movie, but allow time to study the forecourt’s footprints, handprints, and signatures of stars past and present preserved in cement. 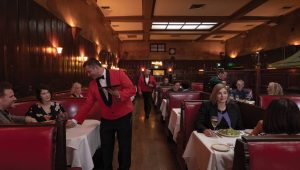 For more Art Deco exuberance, travel a mile east to the Pantages Theatre (1930, B. Marcus Priteca), the nation’s first movie palace designed in that style, now home to touring productions of Broadway musicals. Its glorious 2,812-seat interior — designed by Heinsbergen, who also brought the Wiltern to life — hosted the Oscars from 1949 to 1959. Before or after a show, dine at Hollywood’s oldest restaurant, the nearby Musso & Frank Grill, which opened in 1919. It’s a casually clubby spot for celebrity sightings and old-school cuisine, not to mention L.A.’s best martinis. 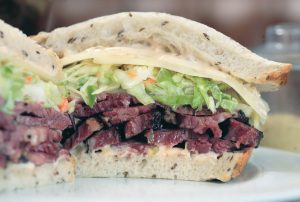 There’s no better way to end an Art Deco tour of L.A. than to head northeast into Griffith Park. At 4,103 acres, it’s one of the nation’s largest urban parks. Poised on a promontory partway up the south slope of 1,625-foot Mount Hollywood stands Griffith Observatory (1935, John C. Austin, Frederick M. Ashley), open and free to the public from noon to 10 p.m. on Fridays, 10 a.m. to 10 p.m. Saturdays and Sundays. With three domes, the central one 84 feet in diameter and clad in copper, the retro-futuristic building has appeared in such films as “La La Land,” “The Terminator,” and “Rebel Without a Cause.” After watching a planetarium show, studying science exhibits, and gazing through a telescope trained on the heavens, conclude your visit on the parapets for unrivaled nighttime vistas stretching to the Pacific Ocean. You may well feel, at last, that you understand the City of Angels.

Cathedral of Our Lady of the Angels