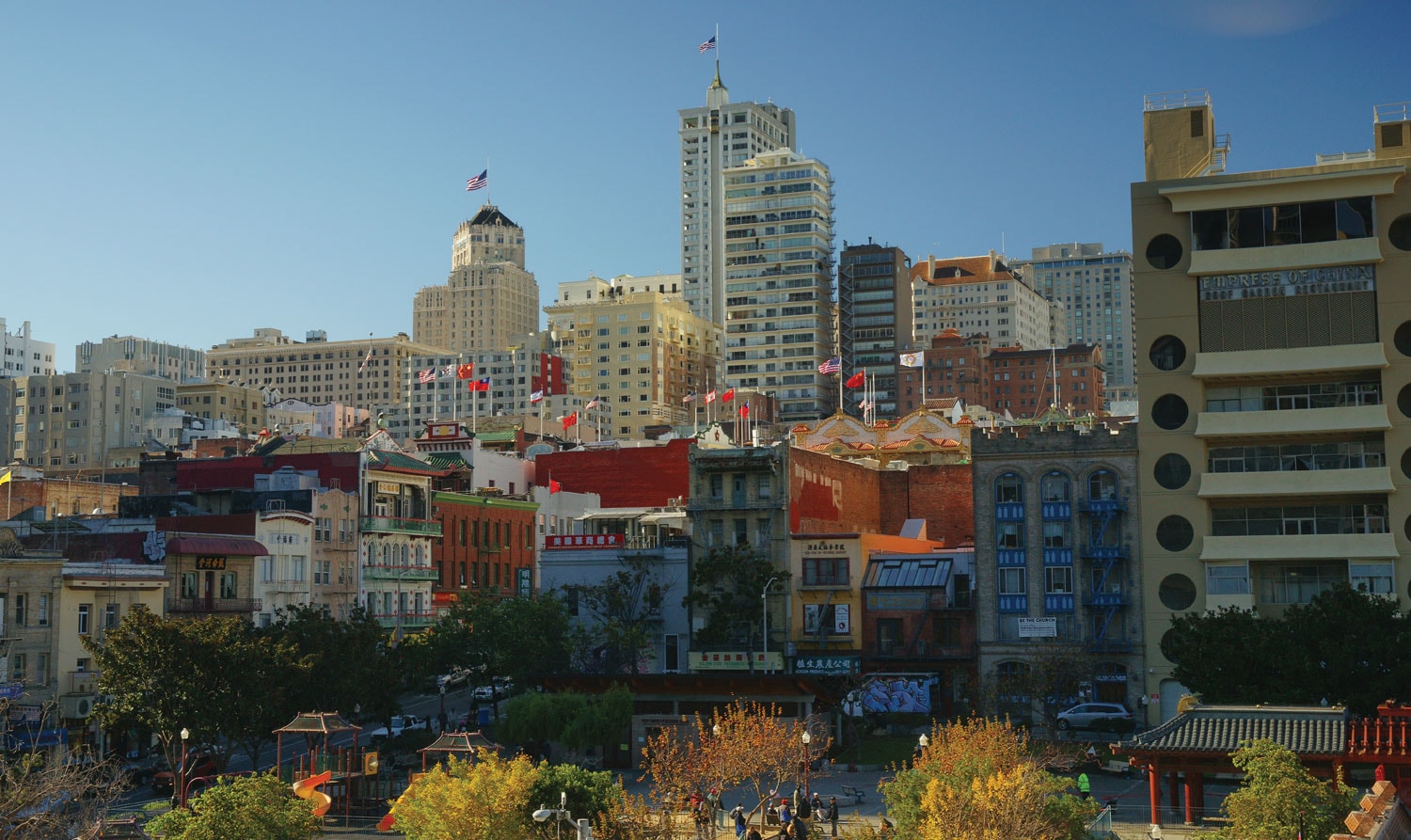 The Chinatown skyline serves as the backdrop for Portsmouth Square, regarded as the community’s living room.

When Kathy Fang was only 6 years old, she peeled eggs, wiped down tables, squeezed bags of soybeans for fresh soy milk, and did everything a kid could possibly do at House of Nanking, her parent’s restaurant in Chinatown in San Francisco, California. When things got hectic at her grandfather’s Little Star café a few blocks away, her father would tell her to walk over and assist him. That was back in the 1990s. 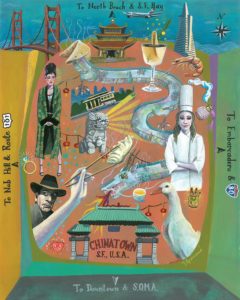 Something about the food industry must have stuck, for today she is a celebrity chef and owner of Fang Restaurant, also in the city. She’s so fond of her Chinatown heritage that when she finished culinary school in Southern California, she returned. “This is my home; it is special,” Fang emphasizes. “I became who I am because of this place.”

While many Chinatown offspring took off after college and settled in the suburbs, Fang is still charmed by the raucous produce markets and the roast ducks hanging by their heads in deli windows. “I am young, but I am still old school at heart,” she says. “I love all of the Chinatown stuff.”

But there are changes afoot in the district. Asian pear cocktails. Radiant public murals. Sophisticated boutiques selling locally designed kimonos. Clearly, this is not your grandma’s Chinatown. But then again, it is. North America’s oldest Chinatown stands on the brink of transformation while clinging to its cultural roots. And, for now, that’s a good thing, especially for visitors. 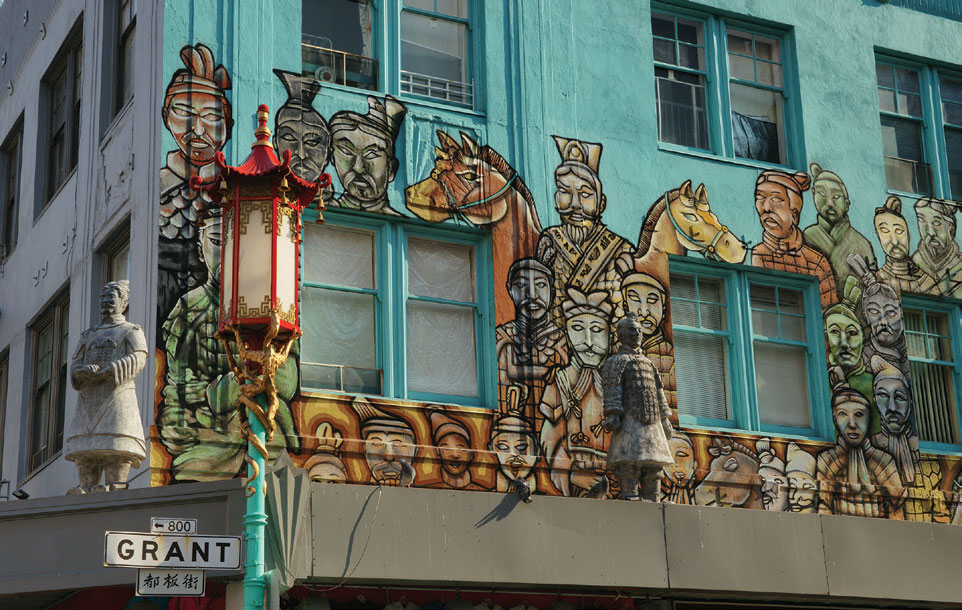 These terracotta warriors were crafted and imported from China.

Today’s Chinatown (about 1-mile square) is a paradise for the curious and remains a top tourist attraction in San Francisco. It’s a city within a city, a sub-society with its own Chinese-speaking hospital, schools, library, and churches. Chinatown inhabitants take for granted the colorful architecture, exotic shops, restaurants and bakeries of every price point, and mysterious streets with storied pasts. For tourists, there are many ways to learn about this Asian enclave. On any given day you can sign up for an alley, food, social justice, or history tour with an experienced local. 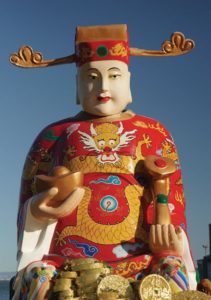 An ancestral figure tops a float during the Chinese New Year Parade. 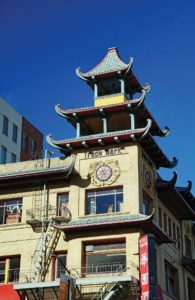 This 1910 signature pagoda represents one of the original architectural motifs erected to entice tourists.

Linda Lee, owner of All About Chinatown Tours, is as passionate talking about her hometown of 14,000 residents as ever. She grew up folding brochures and answering phones at her parents’ Chinatown travel agency and started her walking tours 35 years ago. She travelled the world after college and could have lived elsewhere but, like Fang, chose to return. “Chinatown is everything that is me. My roots are in Chinatown, and everything I need is here,” she says. “There is no better spot to enjoy a dynamic city than from my perch on Grant Avenue.” 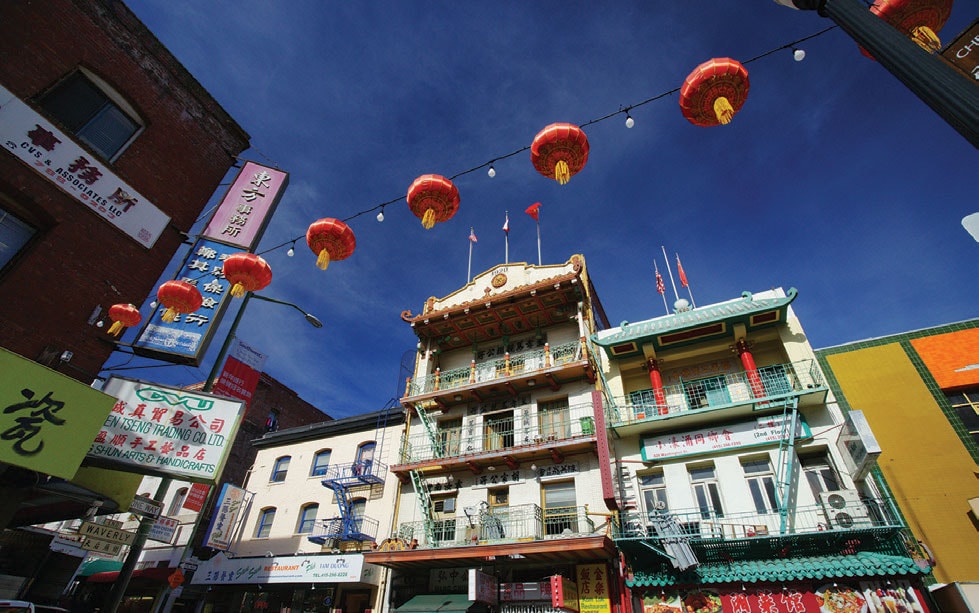 Many revere the Chinese Consolidated Benevolent Association, one of most influential Chinese family associations in the neighborhood.

Formed in the late 1840s, Chinatown was renowned for its rough-and-tumble drug dens, houses of ill repute, and notorious gambling joints. San Francisco leaders soon realized that the seedy area sat on prime real estate next to well-to-do neighborhoods. They strongly urged Chinatown to move to Hunter’s Point, an undesirable sector on the fringes of town. However, Chinatown leaders fought back, offering up the idea of creating a tourist town with Chinese restaurants, movie theaters, clubs, and souvenir shops unlike anything else in the U.S. The idea took hold, allowing the community to stay put. 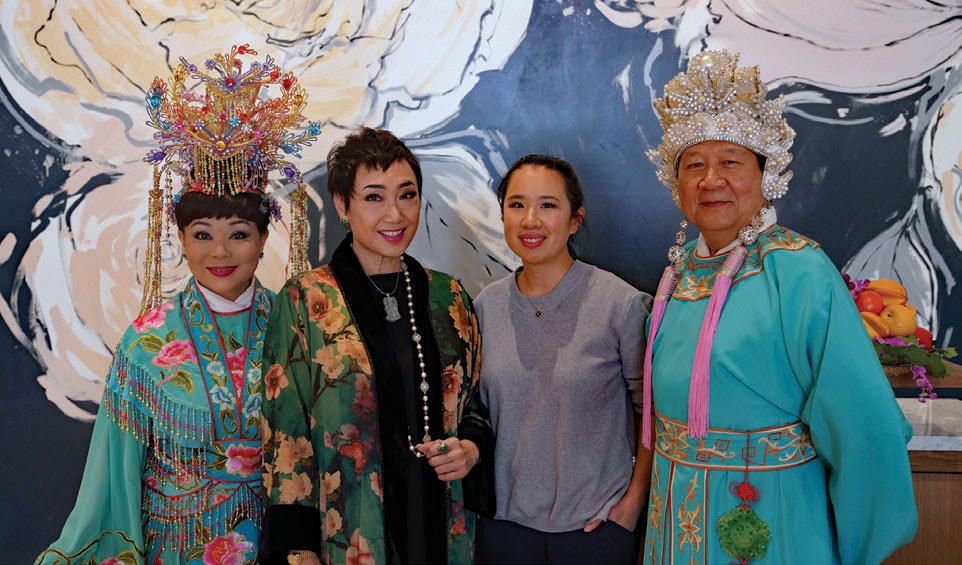 After cleaning up its act, Chinatown morphed into an urban hub, attracting Chinese immigrants who set up family associations that existed to help newcomers find housing and employment. By the 1950s and 1960s, the majority of tenement apartments were occupied by low-income and elderly residents. Succeeding generations fled the confines of the neighborhood, leaving behind the older folks who felt more comfortable staying. 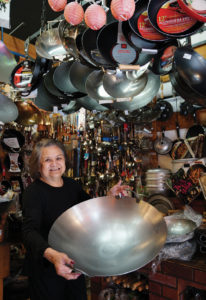 Tane Chan, owner of The Wok Shop, shows off one of her larger pans.

The Chinatown of this decade has not changed much in terms of its ethnic and demographic makeup. The 900 small businesses — from inexpensive hair salons to five-star restaurants — are slowly evolving, one storefront at a time. High-end restaurants are gaining national attention as next-generation offspring run new shops that cater to world travelers. Age-old storefronts such as the The Wok Shop stay alive through online sales. And a plethora of Chinese civic organizations and social services work to maintain a sense of cultural identity within the community.

Mow Lee Sheng Kee and Company, a hole-in-the-wall Chinese deli that only sells Cantonese-style cured meats, poultry, and sausage, is passing its recipes and business acumen down to its seventh generation. The store opened in 1856 and represents the oldest enterprise in Chinatown.

Innovative restaurateurs are leading the charge, introducing Chinese fine dining that prioritizes quality above quantity. George Chen is owner and executive chef of the relatively new China Live, a four-story food emporium comprised of two restaurants, two bars, and a gourmet retail shop. He was delighted when he found out that his restaurant Eight Tables was named as one of Time Magazine’s World’s Greatest Places in 2018. Guests are rapidly booking the 10-course, $225, three-hour tasting experience of small, exquisitely-plated dishes. 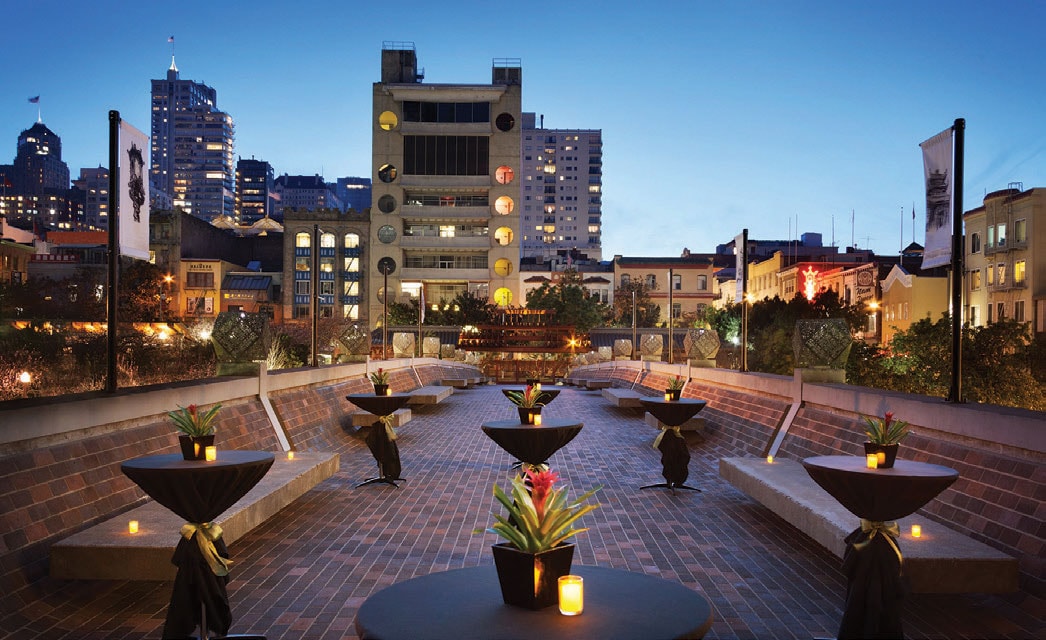 At Eight Tables, customers enter through a back alley to an elevator that transports them to an abode that’s reminiscent of a wealthy Chinese family’s living room, with exactly eight tables. Customers have included a 6-year-old foodie and a 27-year-old techie who came for his retirement party before moving to Paris. “Everyone thinks Chinese food has to be cheap with big portions,” says Chen. “People are thanking me for elevating Chinese cuisine, and that is the ultimate compliment.” Many a diner find delight in the first course, a sampler of the Nine Essential Flavors of Chinese Cuisine presented in nine tiny circular plates, each unique. 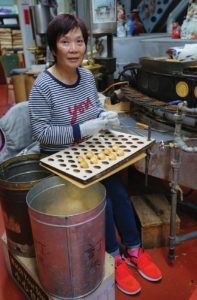 At the Golden Gate Fortune Cookie factory, workers shape each confection by hand. 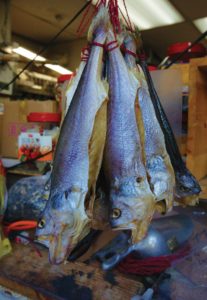 Dried salted fish is a common Chinese staple, steamed and eaten with rice.

Notable chef Fang of Fang Restaurant has put a modern spin on Chinese cuisine with such signature dishes as the spicy chile puffed rice salad and Nanking sesame chicken with sweet potatoes. Since starting the restaurant with her father as partner, Fang has won the Food Network’s “Chopped” competition twice and continues to rise through the city’s culinary scene, speaking at roundtable discussions and appearing on television. She also continues to help at House of Nanking, now a Chinatown institution since 1988.

Other women are also developing Chinatown businesses that take on a contemporary vibe. Tiffany Tam and her sister Renee recently opened Kim + Ono, a trendy boutique that focuses on hand-painted Chinese kimonos designed in San Francisco and manufactured overseas. Both women were raised in Chinatown and learned about business by working at their parents’ souvenir stores. Unlike the typical Chinatown trinket shop, jammed with back scratchers and faux jade carvings, this store is roomy with sitting areas, curated jewelry, fragrances, and clothing treasures. 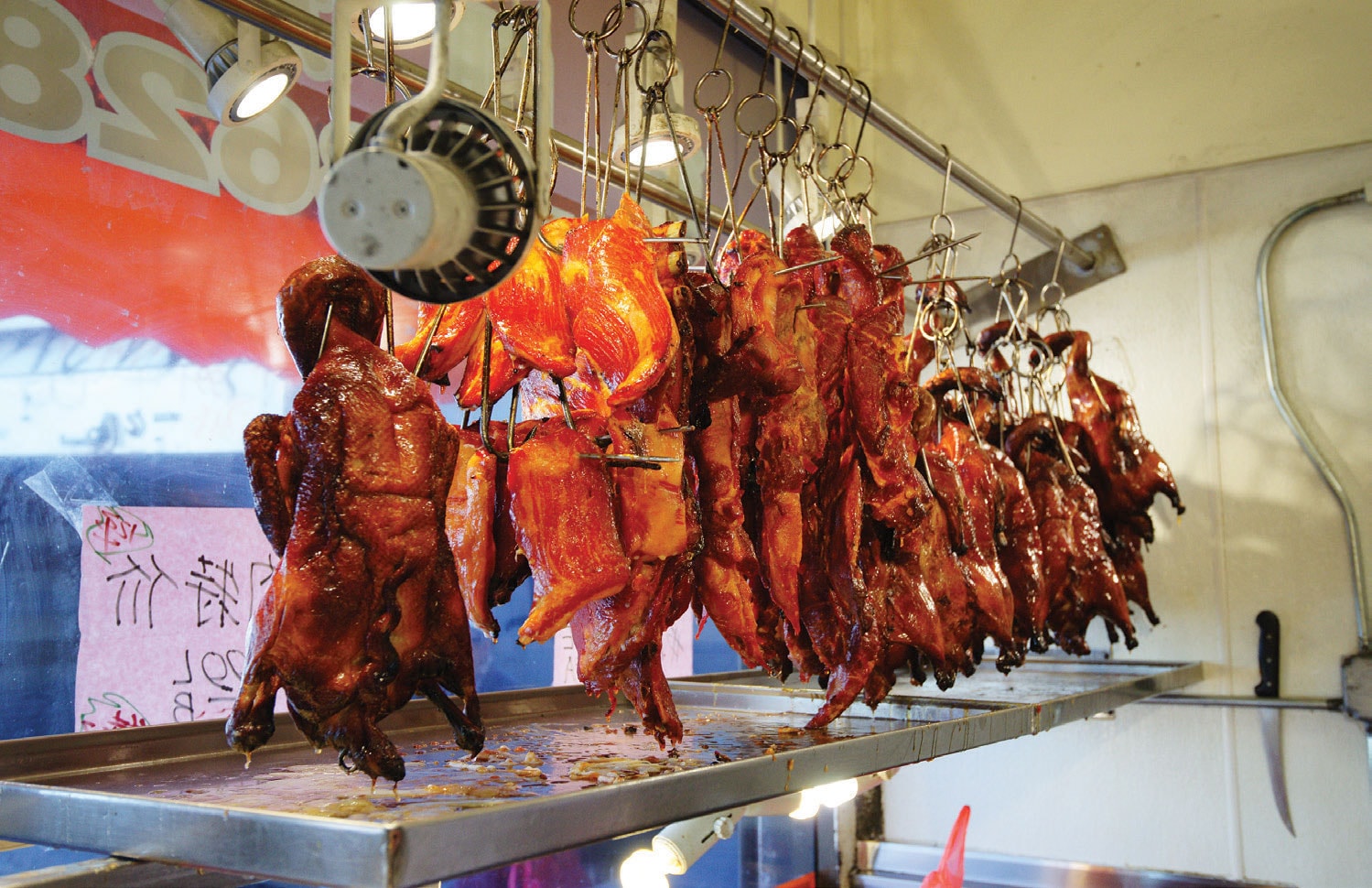 And over at the Red Blossom Tea Company, owner Alice Luong has reinvigorated her father’s heritage tea shop with a focus on educating the masses. Tea samplings are conducted like wine tastings in a modern setting. She lightened the dark, narrow space with new wood floors and elegant shelving showcasing tea canisters and tea sets. 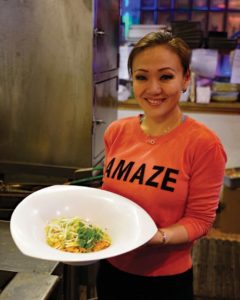 A graze through Chinatown is an adventure sown with sensory gems on the hilly streets and avenues. Old men chatter over Chinese checkers at the age-old Portsmouth Square community park. Along the main artery of Grant Avenue, other seniors put bow to the two-stringed erhu, a Chinese fiddle, if you will. At least 20 murals, with more coming, depict the Chinese American story from different points of view. Through a store window, the owner of Dragon Papa Dessert is hand-pulling maltose syrup and spooling it into white threads to become the Dragon Beard snack with sesame seeds and peanuts. The unique treat is rarely found in the U.S., and its preparation is considered an art form.

Signs of Sino-Portuguese architecture are apparent as you pass the pagoda-topped buildings and glazed tile roofs — all created after the 1906 San Francisco earthquake. These structures, with imitation Chinese flourishes, were designed specifically to attract tourists after most of Chinatown was leveled. The original architect was T. Paterson Ross, working with engineer A.W. Burgren, white men who never visited Asia but managed to pull off the look of an exotic land concocted to mesmerize visitors. More contemporary structures include the Dragon Gate, erected in 1970, as an elaborate archway with green roof tiles, stone columns, and a pair of stone guardian lions. And on Grant Avenue, five replicas of China’s Terracotta Warriors stand on an overhang with a mural depicting more soldiers behind them. 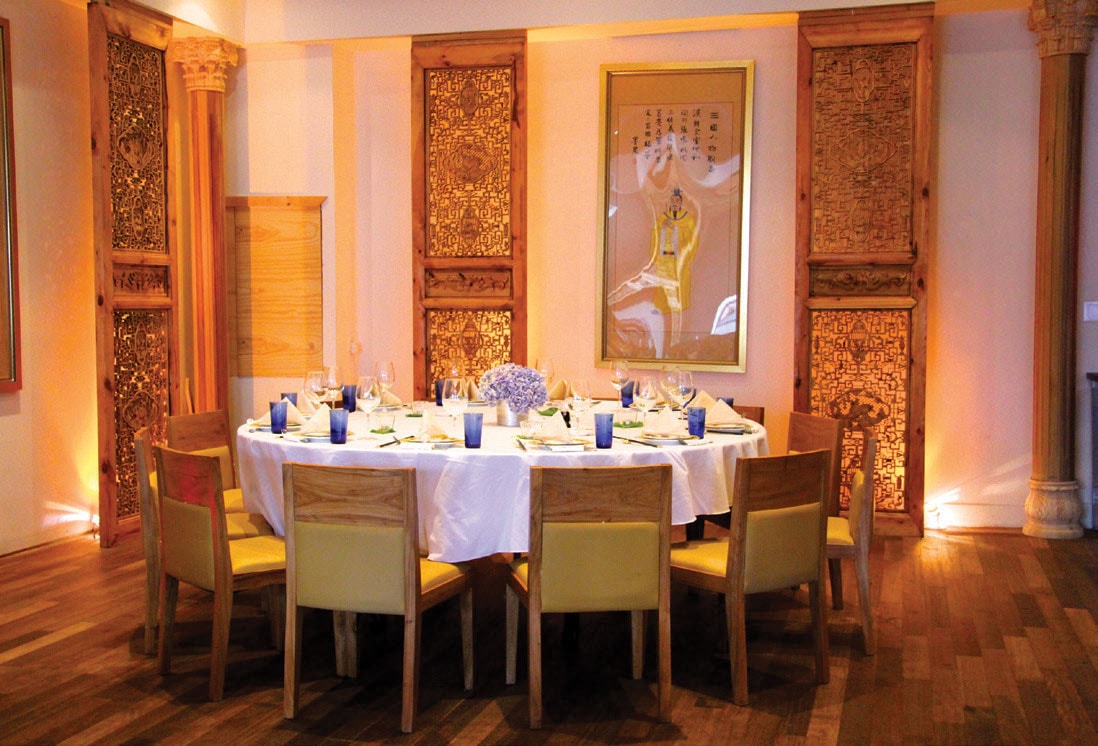 Then there’s Stockton Avenue, packed with outdoor markets, the watering hole for mothers and grandmothers who venture there daily to pick fruits and vegetables. The cacophony of loud voices and rude vendors can be off-putting for the unsuspecting. Says Chef Fang, “As crazy as the local market can be, it gives me a sense of comfort because I have been walking these markets since I was 5. To this day, it still feels the same.”

To truly “get” Chinatown, outsiders must realize that many merchants hail from rural villages with no understanding of American expectations, she explains. “They have a lack of exposure to the customer service us Americans have grown accustomed to.” 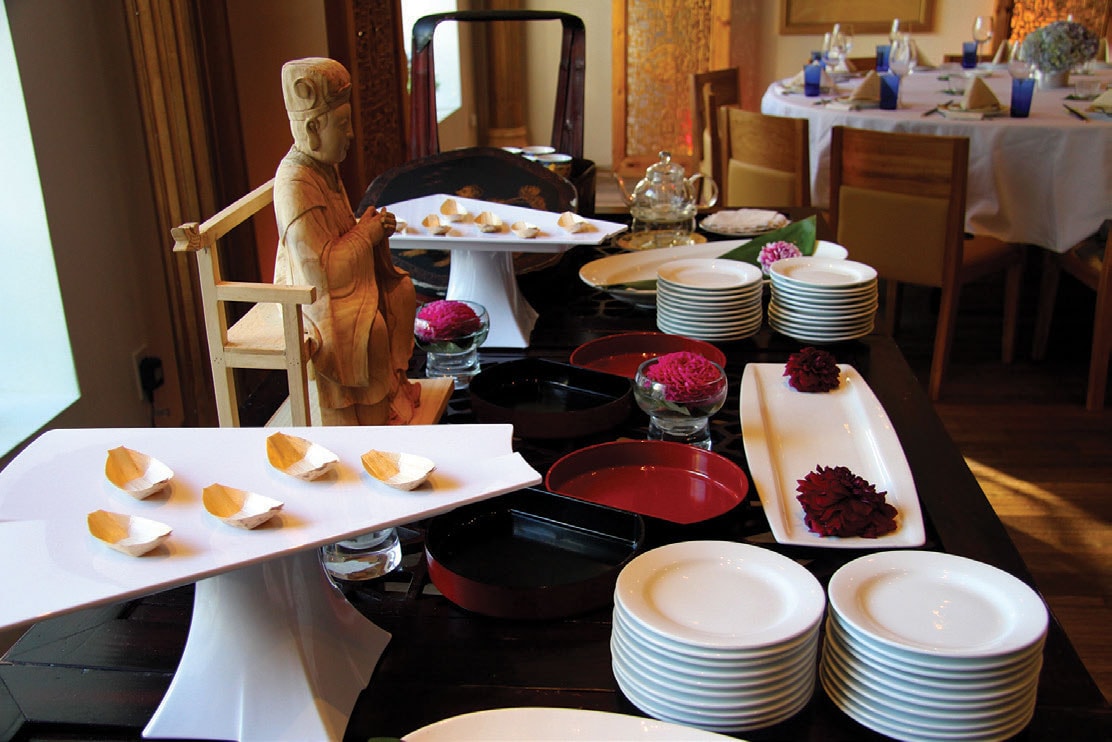 A private dining room at Fang Restaurant set up in the traditional Chinese banquet style, photo courtesy of Kathy Fang.

Coarseness is, well, part of China-town’s authentic ambiance. When Betty Louie, a popular real estate owner in Chinatown, dined at a favorite café, she asked for a bitter melon dish, but the server informed her that the cook didn’t feel like making it. “She told me I couldn’t have it, and he would make me something else, and that I would like it,” Louie recalls. “I think it was some pork dish, and I just ate it. And yeah, it was good.”