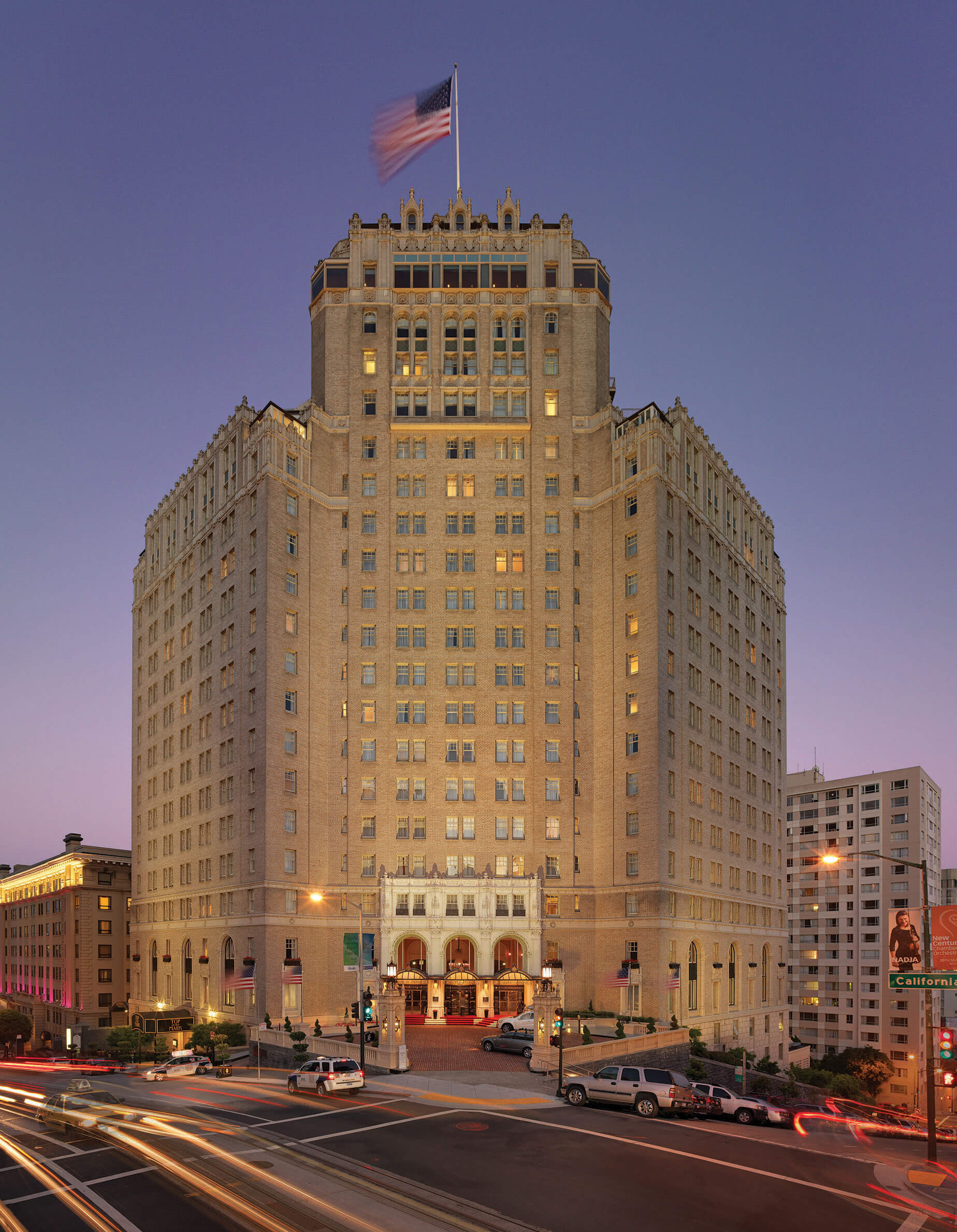 Since its opening in 1926, the InterContinental Mark Hopkins Hotel has galvanized its position as a San Francisco landmark. Located atop the city’s celebrated Nob Hill neighborhood, the hotel stands in the footprint of a grand Gothic-style mansion built by Mark Hopkins, one of the four railroad barons of the Central Pacific Railroad. Hopkins hired a team to build the estate for his wife on the hilltop site in 1878 but died before its completion, and the original 40-room mansion was destroyed in the 1906 earthquake.

Nearly 50 years later, successful mining engineer and investor George D. Smith purchased the lot, intending to build a magnificent hotel. He saw his dream come to fruition and opened the hotel in December 1926. San Franciscans hailed the 19-story structure composed of brick, steel, and poured concrete as “architecturally perfect, flawless in its erection, comprehensive in its accommodations, [and] strikingly representative of the best there is in modern hostelry.” 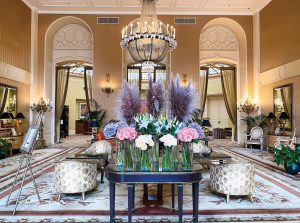 Fresh floral arrangements are a hotel tradition and welcome guests amid gold wallcoverings and a historic crystal chandelier in the lobby. Photo: Mark Hopkins Hotel

Smith also commissioned nine 7-foot-high panels painted by Maynard Dixon and Frank Van Sloun for the hotel’s Room of the Dons. The priceless murals speak to early California history and the legend of the fictitious Queen Califia. According to Historic Hotels of America, the murals were an “instant sensation” when the hotel opened. The organization, which is part of the National Trust for Historic Preservation, recently named the Mark Hopkins among the top 25 hotels with the most magnificent art collections. Its latest acquisition is a bronze sculpture, Aurora by Richard MacDonald, in the lobby.

By 1939, Smith came up with another ingenious idea. Upon the vacancy of the hotel’s 19th-floor penthouse, he envisioned a vast skyline lounge embraced by glass panels to take in panoramic views of the city. When finished in May, buzz concerning the fabulous Top of the Mark spread, and crowds formed outside the elevator doors. The who’s who of the city immediately flocked to the new hotspot to have a drink amid 360-degree views. Luminaries came to stay at the grand hotel, including actors Elizabeth Taylor, Judy Garland, and Betty Grable; singer Elvis Presley; and two former U.S. presidents, Herbert Hoover and Franklin Roosevelt. 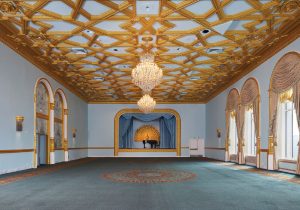 The plaster ceiling pattern in the restored Peacock Court was part of the original ballroom but is now highlighted in gold. Photo: Russell Abraham

To visit is to journey into the era of the Model T automobile. Interiors adorned in gold and salmon stand in contrast to contemporary trends favoring minimalist gray and white. The bronze U.S. mail chute on every floor still operates. Patterned carpets, wrought iron railings, and marble bathrooms uphold 1926 opulence. Seven suites offer enclosed sunrooms, and no other San Francisco lodging claims this architectural feature.

“Coming back to the InterContinental Mark Hopkins is like revisiting an old friend’s home,” says Jennifer Dunn, director of sales and marketing. At the hotel, traditions possess endearing value. At the Top of the Mark, veterans and active military personnel can receive a free shot of liquor known as the Squadron Shot, honoring a ritual that began among service members during WWII. And after decades, gloved doorkeepers continue to greet visitors. “They are ambassadors for our hotel. They know guests by name and are the first point of contact upon arrival,” says Connie Perez-Wong, creative director at the Mark Hopkins.

A third tradition is the New Year’s Eve dinner which began when the hotel opened and cost $8 for three courses, including prime rib. Today the celebratory meal runs $495 for seven courses and includes live music and a pre-dinner reception. 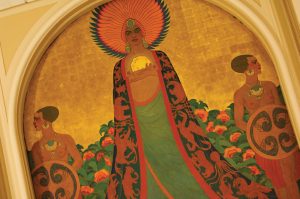 In the Room of the Dons, the nine murals on the ceiling were painted by Maynard Dixon and Frank Van Sloun. Photo: Mark Hopkins Hotel

New in 2022 was the top-to-bottom restoration of the Peacock Court. At the September unveiling, guests sipping turquoise-tinted cocktails gasped at the crystal chandeliers, gold ceiling trim made of plaster, and fresh mint wallpaper. Stealing the show was the gold peacock statue in full plumage. Top-tier hospitality and development executive Nile Tuzun led the project in collaboration with general manager Michael Pace. “He wanted to keep to the traditional look and feel and glamour of the original,” Tuzun says. “Since all the photos were in black and white, we decided to use the theme of the peacock and drew our color palette inspiration from that.”

While respecting the past, the property strives to satisfy travelers with modern amenities. Unlike other venues, it does not charge a pet fee. And new Porsche-branded EV chargers enable guests to top off compatible electric vehicles for free. 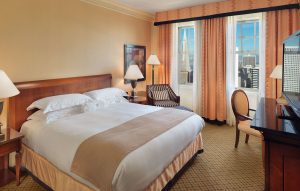 Each of the 383 rooms and 26 full-sized suites at the InterContinental Mark Hopkins San Francisco offers a stellar view of the city. Photo: Rien van Rijthoven

The architectural icon has secured bookings from the White House and the mayor’s office. Ambassadors and diplomats from embassies and consulates want to lock in their post-pandemic meetings at the hotel, says Dunn. By 2026, the InterContinental Mark Hopkins San Francisco will reach 100 years old. If sumptuous parties from previous galas are a clue, what is in store for the centennial soiree will be off the charts. “For now,” adds Dunn, “we are working to fill the pent-up demand.”

WA&A contributor Kathy Chin Leong married the man of her dreams, Frank Leong Jr., at the Mark Hopkins in 1985. She recently returned to the hotel to celebrate their 37th anniversary. She is a freelance writer based in Sunnyvale, California.