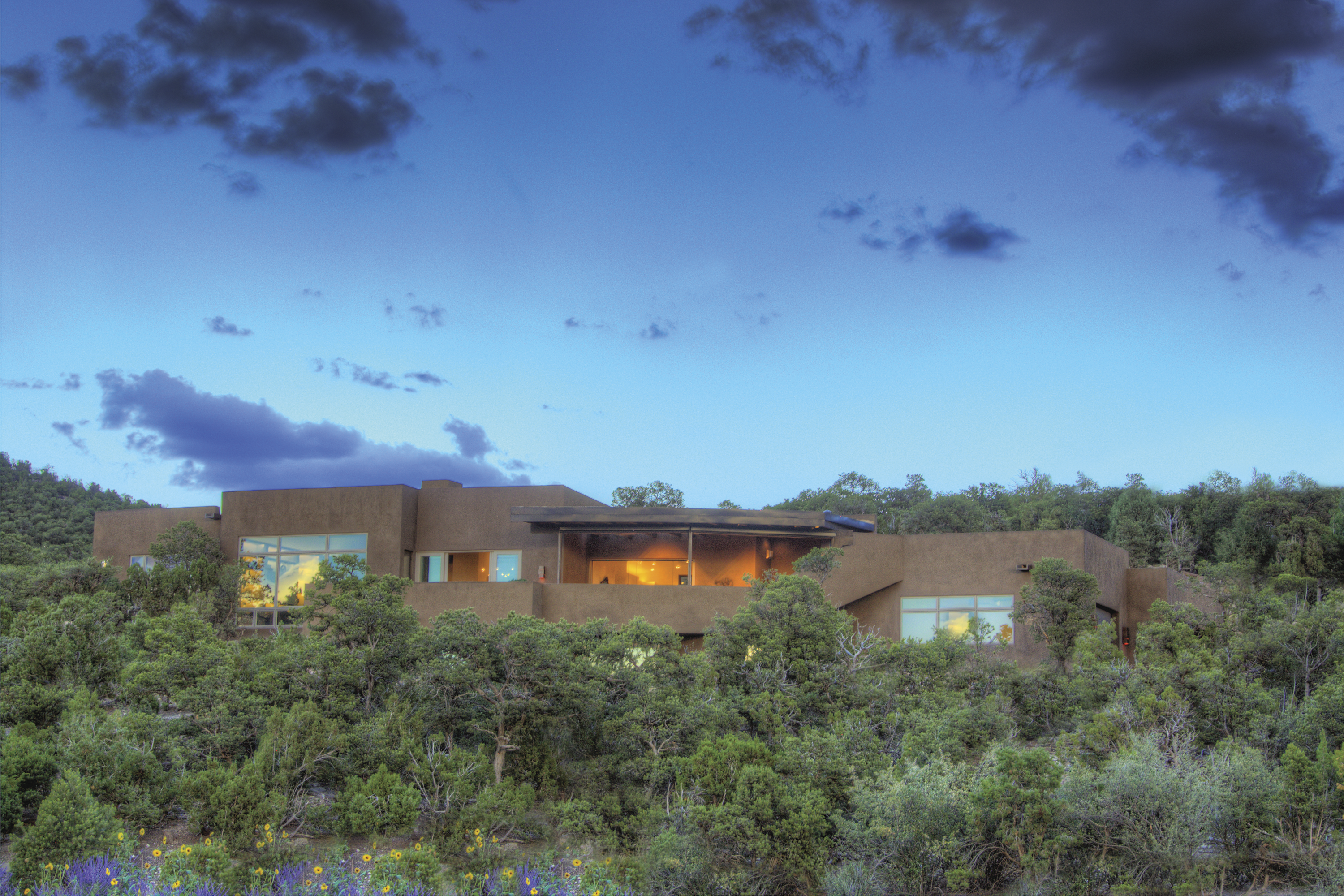 Nestled into a hill high above the famous Bishop’s Lodge, this contemporary home becomes a part of the landscape.

THE LURE OF THE WEST captured Dan Klein and Robbyne Jones when they visited Santa Fe, New Mexico. The couple, living in the inner beltway of Washington, D.C., visited the city while on a business trip “out West,” studying places to which they might be interested in moving. The landscape, along with the interesting residents who live in Santa Fe, convinced them to make their move to the high desert capital of New Mexico.

Making the move from a Victorian home in a lush area to a contemporary home in the desert was a big move. They purchased property north of the city, overlooking the Tesuque Valley with wraparound views all the way to the Jemez Mountains, and for five years strategized with the architectural firm of Hoopes and Associates. Architect Craig Hoopes’ philosophy of melding the classical as well as the modern into his designs was just what Robbyne and Dan wanted. The result is a home that was recently highlighted in Santa Fe’s annual Parade of Homes.

Among its most well-known projects, Hoopes and Associates was lauded for its redesign of Santa Fe’s historic Lensic Theater, the Carmelite Monastery in Maryland and Escuela Superior Politecnica del Litoral in Ecuador.

Bringing in interior designer Lisa Samuel, of Samuel Design Group, the couple formed a team and began the long process of creating the house of their dreams. Samuel developed a process based on the couple’s likes and dislikes: “Robbyne came to me with a book on homes in San Miguel, Mexico,” she said. “She had specific ideas of what she wanted but more ideas of what they did not want.”

From that beginning, Robbyne and Dan now have a home built around a plaza — a concept mastered in Mexican architecture — with activity on each side. Throughout the home Samuel included hand finishes — much like those in Robbyne’s book — such as a hand-hammered iron stair railing created by Sheehan Prull, son of the builder, who studied knife making in Japan.

Craig Hoopes likens the home to a modern-day cave dwelling. “This home is nestled into the hillside which gives a sense of feeling intimate and protected. Yet on the opposite side, you are exposed to the world beyond, with views 90 miles away, all the way to Colorado.” He explains that the way the house revolves around the plaza gives the “intimate to expansive feel,” depending on where you are. “When looking in toward the plaza, your eyes can rest from the expansive views,” he says, likening the experience to a comforting embrace. “That’s very important.”

The office wing of the house sits on one side of the plaza, while the master suite, perpendicular to it, connects to the main living space. Robbyne can be in the kitchen and see Dan at work in his office, creating intimacy through proximity. At the same time, Dan, sitting in his office can look through the windows of the home to view the distant mountains.

Access to the plaza is gained through a metal-and-wood door, built on the lower level. Stepping upward along a terraced hillside, built with limestone excavated from the site along with imported stones stacked loosely, one emerges in the concrete tiled plaza.

Hoopes sited the residence using the natural landscape so that the view of neighbor homes would not intrude, pleasing Robbyne and Dan who wanted privacy without window coverings.

With a natural curvature to the home, each deck, portal and window has unique views allowing light to enter the home at different angles with changing light patterns throughout the day.

Samuel, a fourth generation New Mexican, brought troves of ideas to Dan and Robbyne, including a hiding place for their Jack Russell terrier. “Daisy’s Domain” is located in a hallway under a counter. Its walls and doors are structured so Daisy can see out but still have her privacy on her bed.

Together Hoopes and Samuel, along with Prull Builders and the couple who dreamed it up, have created one of Santa Fe’s newest and finest contemporary homes. 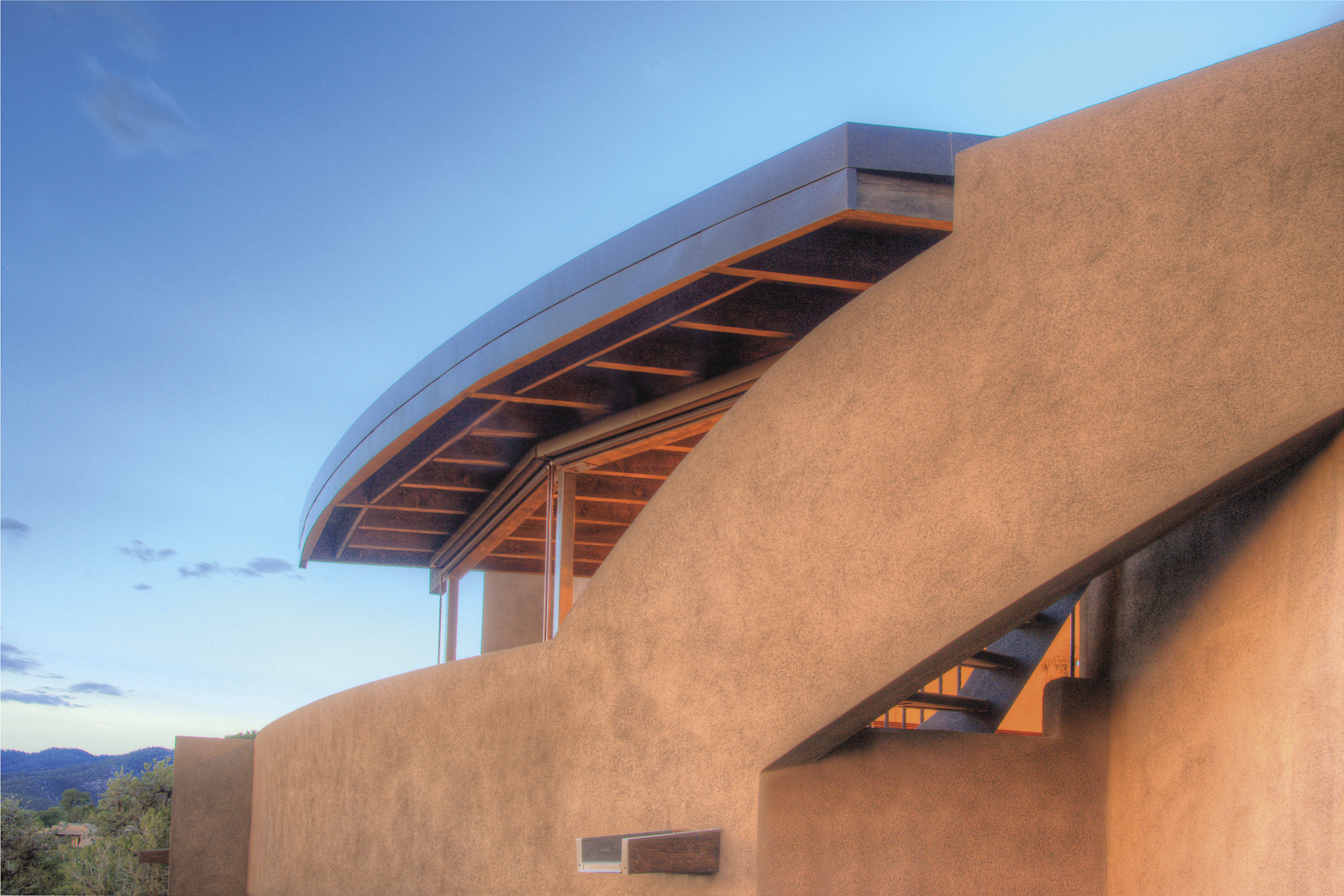 Curvature of the portal and its roofline provide an intriguing accent. This page: Indoor and outdoor spaces meld with the use of disappearing doors from the kitchen/dining room to the portal. 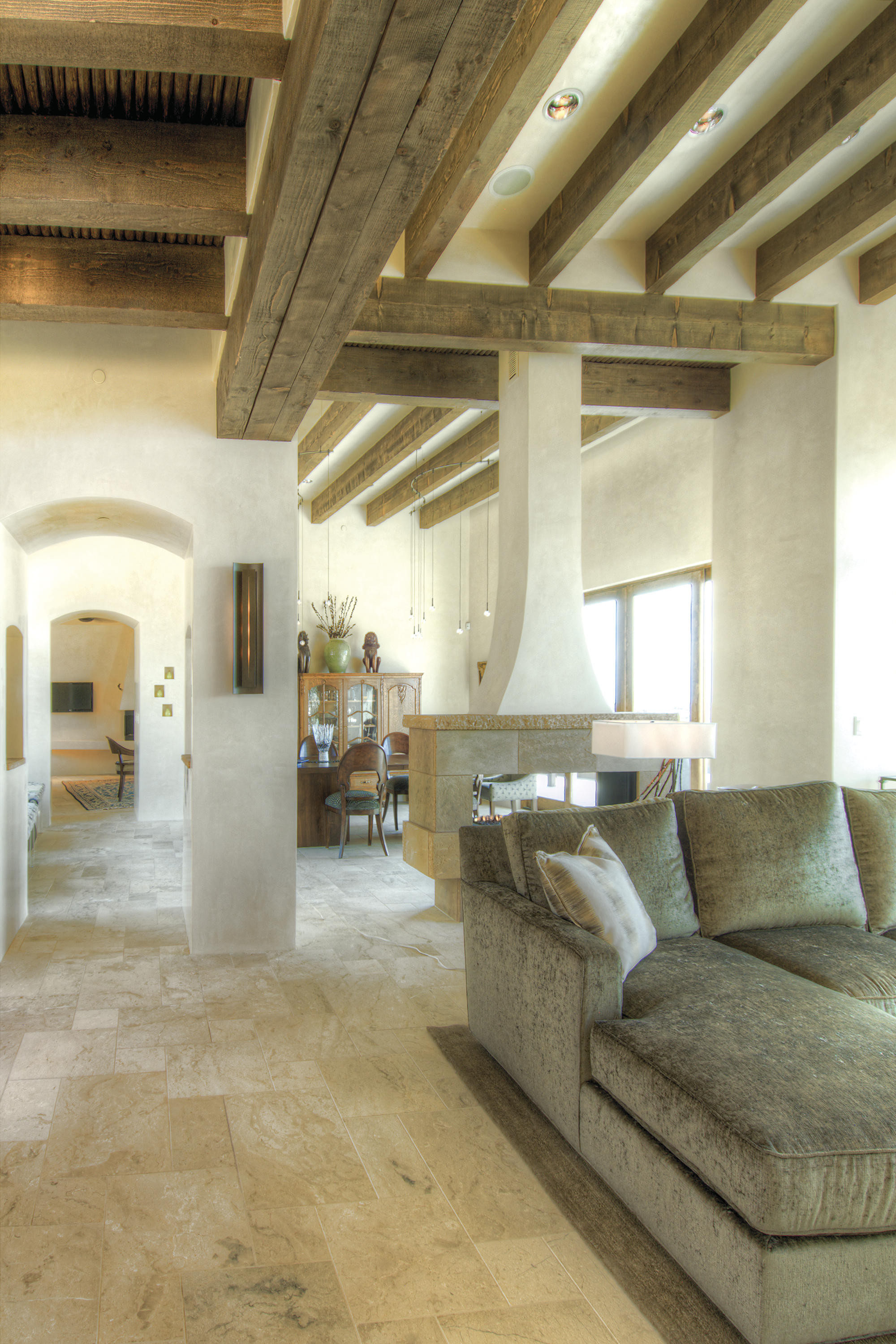 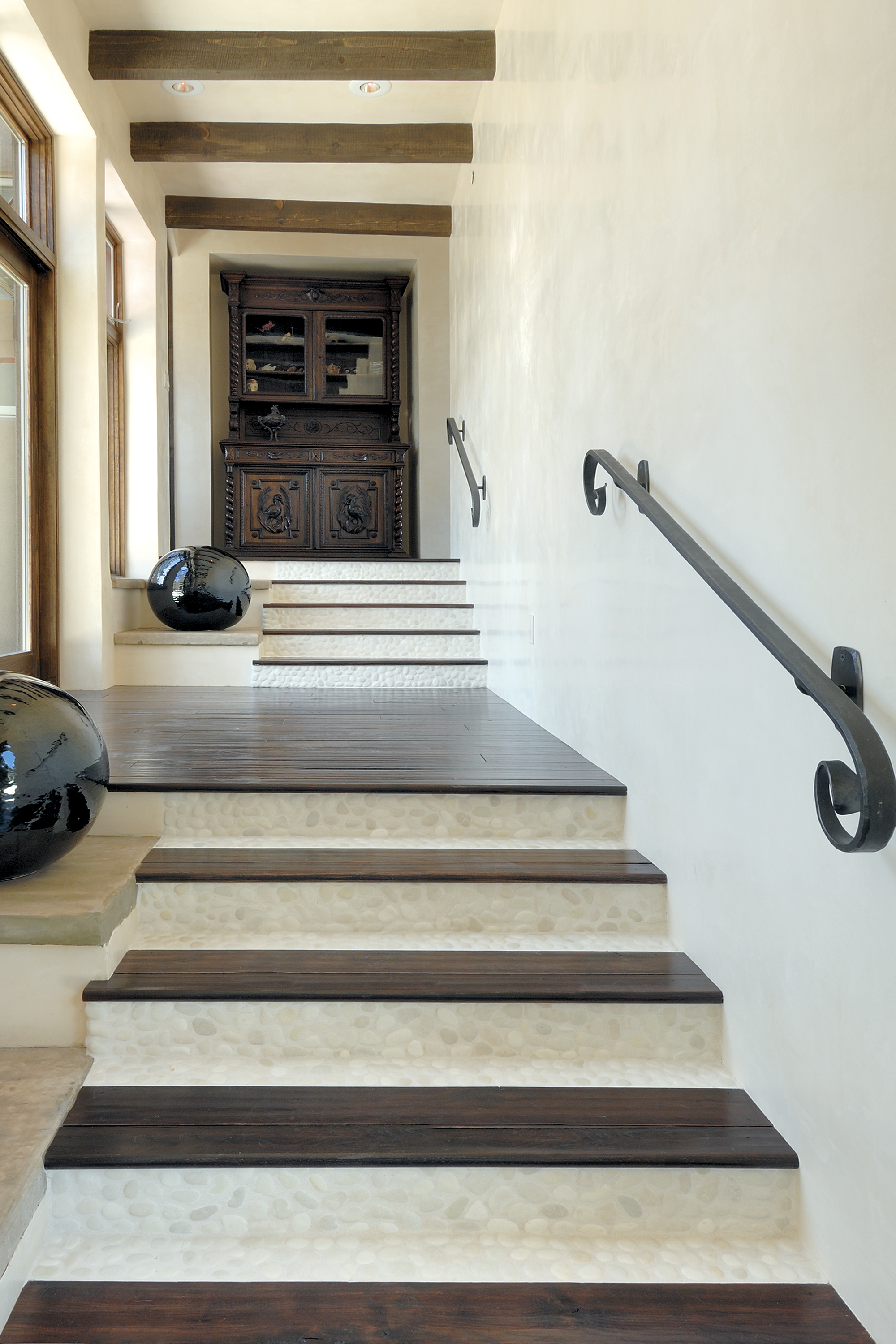 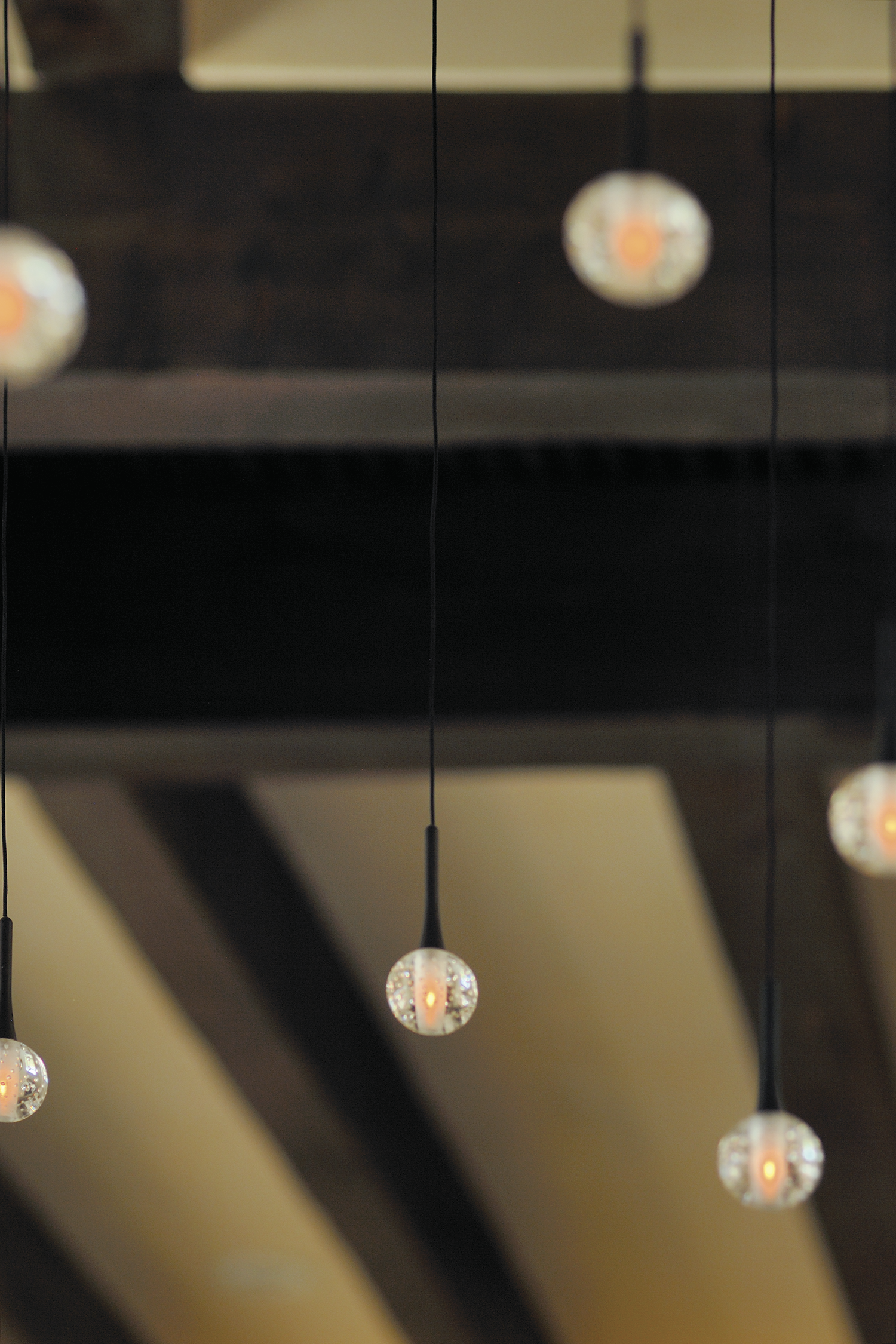 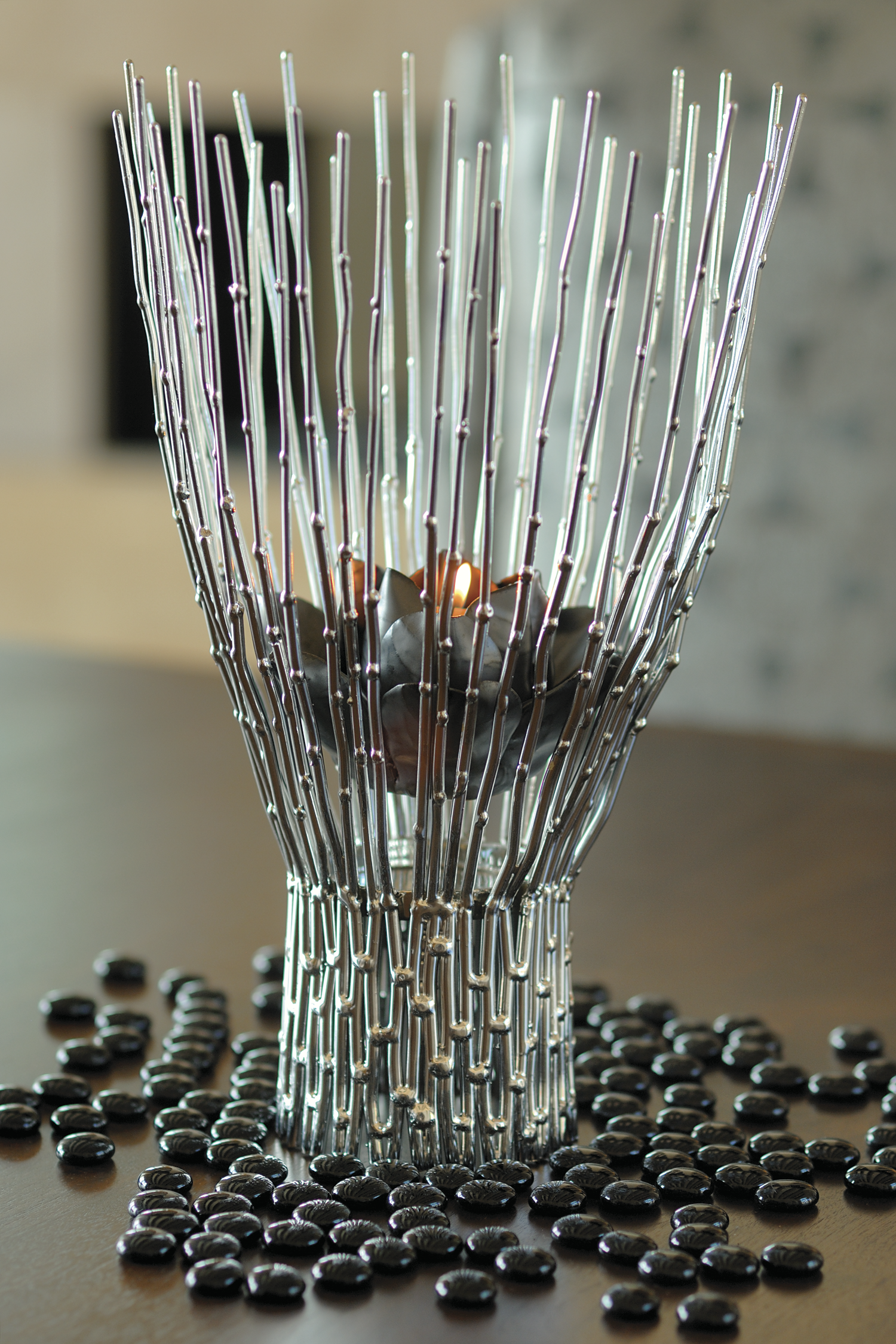 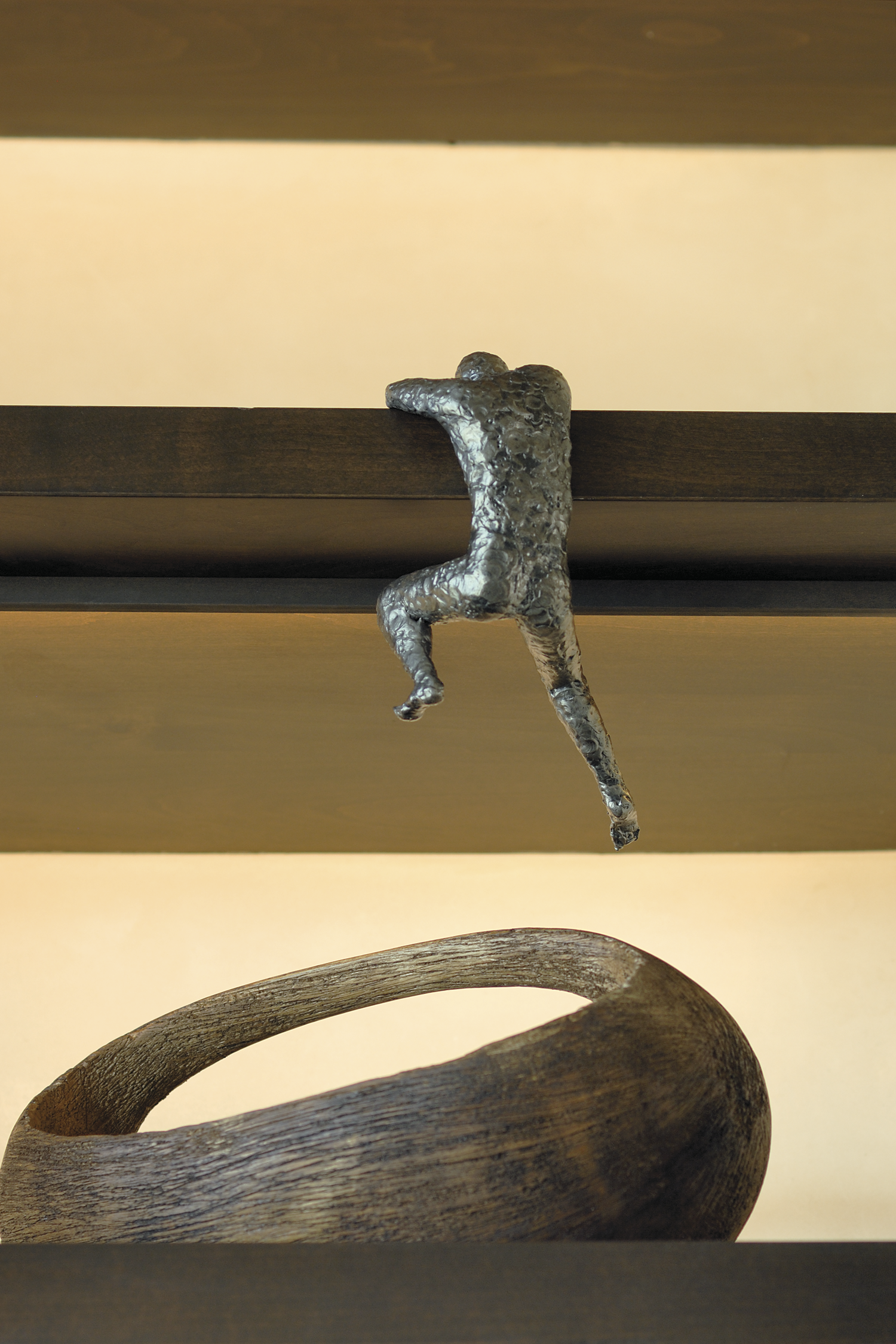 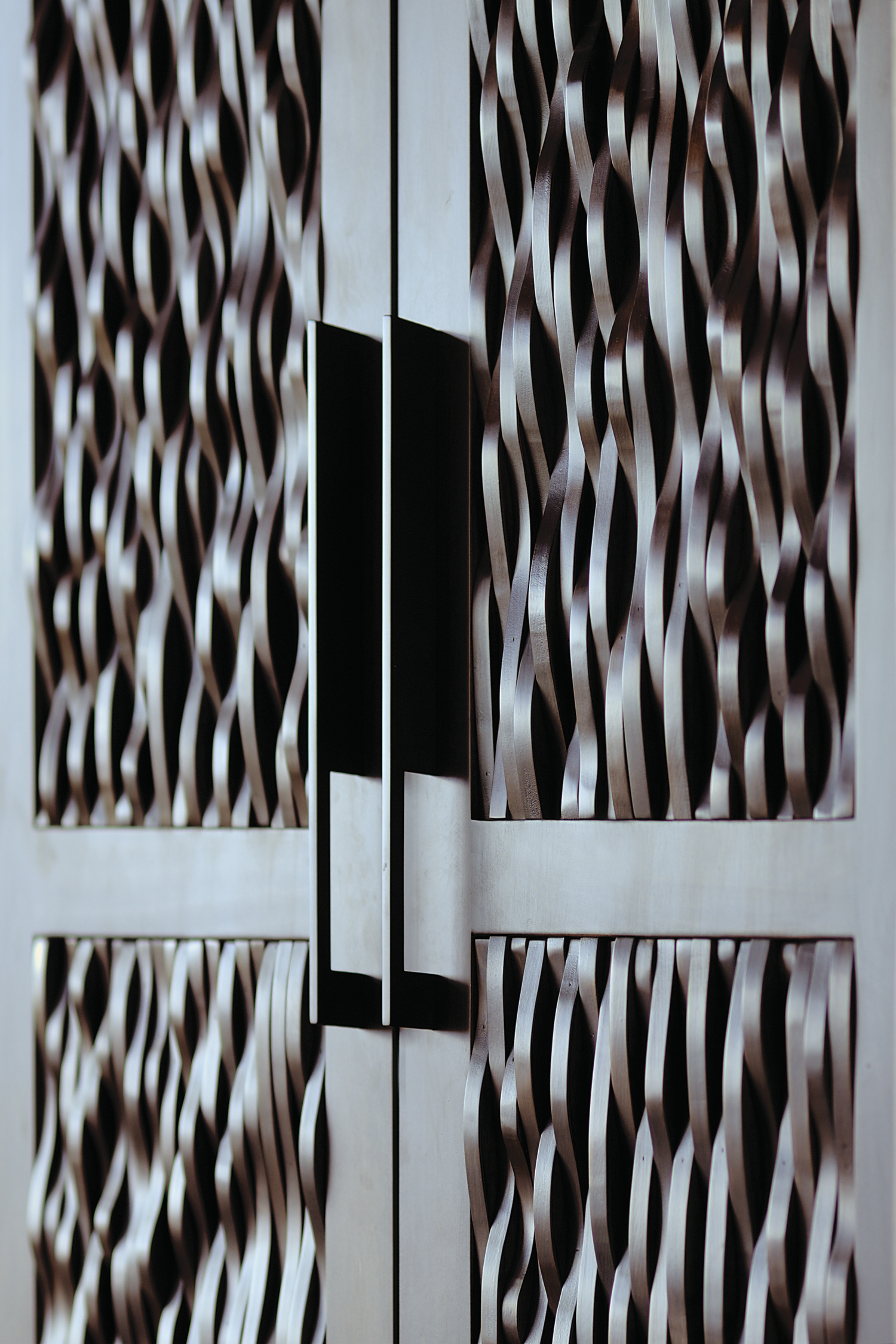