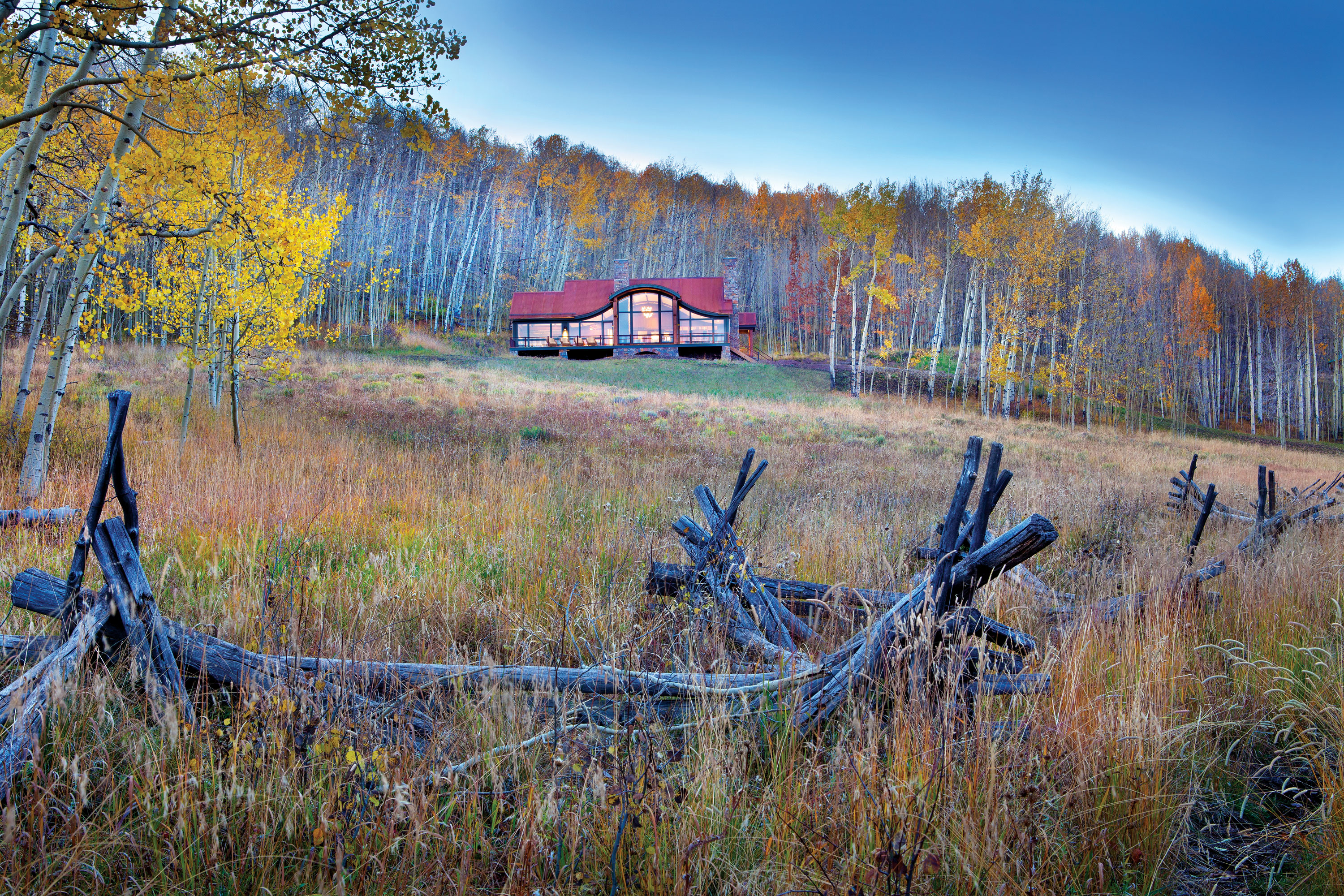 The muted red corrugated steel roof blends into the tonality of the landscape surrounding the home.

SITTING AT 9,820 FEET AND SURROUNDED BY SHIMMERING ASPEN TREES, the Gould residence overlooks the San Miguel Range and its crown jewel, the 14,250-foot Mount Wilson, near Telluride, Colorado.

Beautiful in its simplicity and sophistication, the 2,200-square-foot home redefines the mountain cabin in modern terms by blending traditional aspects of regional design with contemporary elements. The home doesn’t take its location for granted, and it’s evident in each architectural detail.

“One of the primary directives was to capture the view of Wilson,” says homeowner John Gould. “It is a iconic mountain range and we wanted to make sure that the home was sited properly to capture that view.”

To achieve this, Thad Siemasko, principal of Siemasko + Verbridge, toured the site with the homeowners, selecting an area where a rambling meadow rises to meet an aspen grove. The home faces Mount Wilson and rests against the backdrop of the old-growth trees. Its southern exposure captures the view and light radiates throughout the home. The character of the site is further enriched by a game trail and a nearby snake-rail fence that zigzags across the landscape.

“By being involved in the site selection, I was able to point out some aspects of the land that perhaps only an architect can see,” Siemasko says. “The home faces the right direction and the land had a series of benches that worked their way up, so it’s a nice level bench area that the house could naturally fit on.”

The home stands up to harsh weather with an assortment of hearty materials that reflect Telluride’s design vernacular. Timber and rust-colored steel offer a natural color palette that appears to be derived from the surrounding terrain. Stone at the home’s foundation anchors the structure to the ground while chimneys stretch skyward, and the organic shape of the arched roof reflects the rising peaks of the San Miguels.

The 2,300 residents of Telluride live in a box canyon surrounded on three sides by rugged 14,000-foot peaks. The town’s rich mining history is depicted in historic structures found throughout the small community. Mountain cottages, colorful Victorians and examples of Parkitecture mix with the clapboard storefronts downtown. Siemasko and Gould toured structures in Telluride, collecting examples of architectural details. Together, they explored the traditional aesthetic and then applied their original twist.

“[The Goulds] didn’t want an old recovered mining hut kind of house, but [they] also didn’t want a ‘Star Wars’ house,” says Siemasko. “They wanted something that had all those nice natural materials that you might find in Telluride but used in a more contemporary way. Everything is pretty clean but if someone was going into the house looking for a traditional home, they could see it and if they were looking for a contemporary home they can also see that. That’s kind of the trick of it.”

Instead of designing the home to maximize select views, the central sweeping curve of the roof arches over an open floor plan. Custom floor-to-ceiling windows frame the view and create the home’s southeast facade, providing mountain views from the master bedroom, den, great room and dining room. A porch links these primary living areas and draws the family outdoors.

“[Thad] was visiting Telluride and at two or three in the morning he started sketching and came up with this very interesting curved roof,” Gould says, noting that initially they planned to build a gabled structure. “What that did was give us a much better view by definition, but also it’s very important for livability as the home feels much more expansive.”

The design of the sculptural roof was inspired by the mountains, Siemasko says, and the resulting cathedral ceilings are softened with interior details including the light fixtures in the great room that evoke aspen leaves.

“I’ve never built a house with a curved roof. I’ve done some wild projects — one house with slanted walls, that was very unique, and another one that was 15,000 square feet — but this one has to be one of the most unique homes I’ve ever done. You really had to plan ahead,” says Kent Parkison of Old West Builders, who brought 45 years of experience to the project. “It was difficult to frame, you had to work with the curves all the way through from inside to out. It tested your mind, if you will.”

The Goulds made a concerted effort to avoid overbuilding, but they still wanted to create a space that was comfortable. Despite the home’s modest size, it can sleep up to 10 people comfortably between its two bedrooms, bunk room and loft, says Gould. In addition to its small footprint, the home is off the grid to accommodate the fragility of the landscape, says Siemasko. Power is generated from a solar array that’s discreetly set aside from the home and water is sourced from an on-site well.

In keeping with modernity, the home’s interiors are clean and contemporary. The Goulds wanted dual-purpose spaces with warmth and flexibility, says principal Jean Verbridge, who approaches interior design as an extension of the home’s architecture.

The homeowners had worked with Siemasko + Verbridge during a renovation of their Massachusetts home. “I knew [Thad Siemasko] was very creative and I also knew he had a highly capable staff,” says Gould.

Based in Beverly, Massachusetts, Siemasko + Verbridge specializes in architecture, interior design and landscape architecture. The firm defines its design philosophy as both site specific and custom-tailored to clients needs, personalities and aesthetics. “It’s pretty common to go to a place we’ve never been before and look over the situation and deliver something that we think is a really fresh view of the area, but still fits the area,” Siemasko says.

Gould also says that father-and-son team Kent and Kody Parkison, along with Mike McCullough, of Old West Builders delivered expert craftsmanship while making the process enjoyable. “Part of what I cared most about was integrity,” says Gould. “It became fun and these guys are so honest. It’s as if they were building their own house. There was a level of concern about the home and about [our] money, too. Old West understood that the decisions they make can impact funding.”

As an avid alpine climber, Gould has tackled peaks across the country and Europe. He came to Telluride on the recommendation of a climbing guide about 12 years ago and was attracted to the quiet of the box canyon and the red sandstone on the mountainsides.

“With the 14,000-foot peaks and all the great activities — the great hiking, great skiing, great river rafting, great kayaking — everything to like if you enjoy the outdoors is there and it’s multiseasonal,” Gould says, noting that he plans to ascend Mount Wilson, one of Colorado’s toughest fourteeners to climb among the state’s 53.

By dedicating themselves to understanding the region, Siemasko + Verbridge designed a home that’s firmly rooted in its appreciation of the site, something they both feel connected to as well. “We can’t wait to get back to Colorado,” Siemasko says. “It was really great to be there. [We went back recently and] there was a wonderful sense of being home. We have lived the project so much in our minds that to wake up there in the morning, I felt like I lived there.” 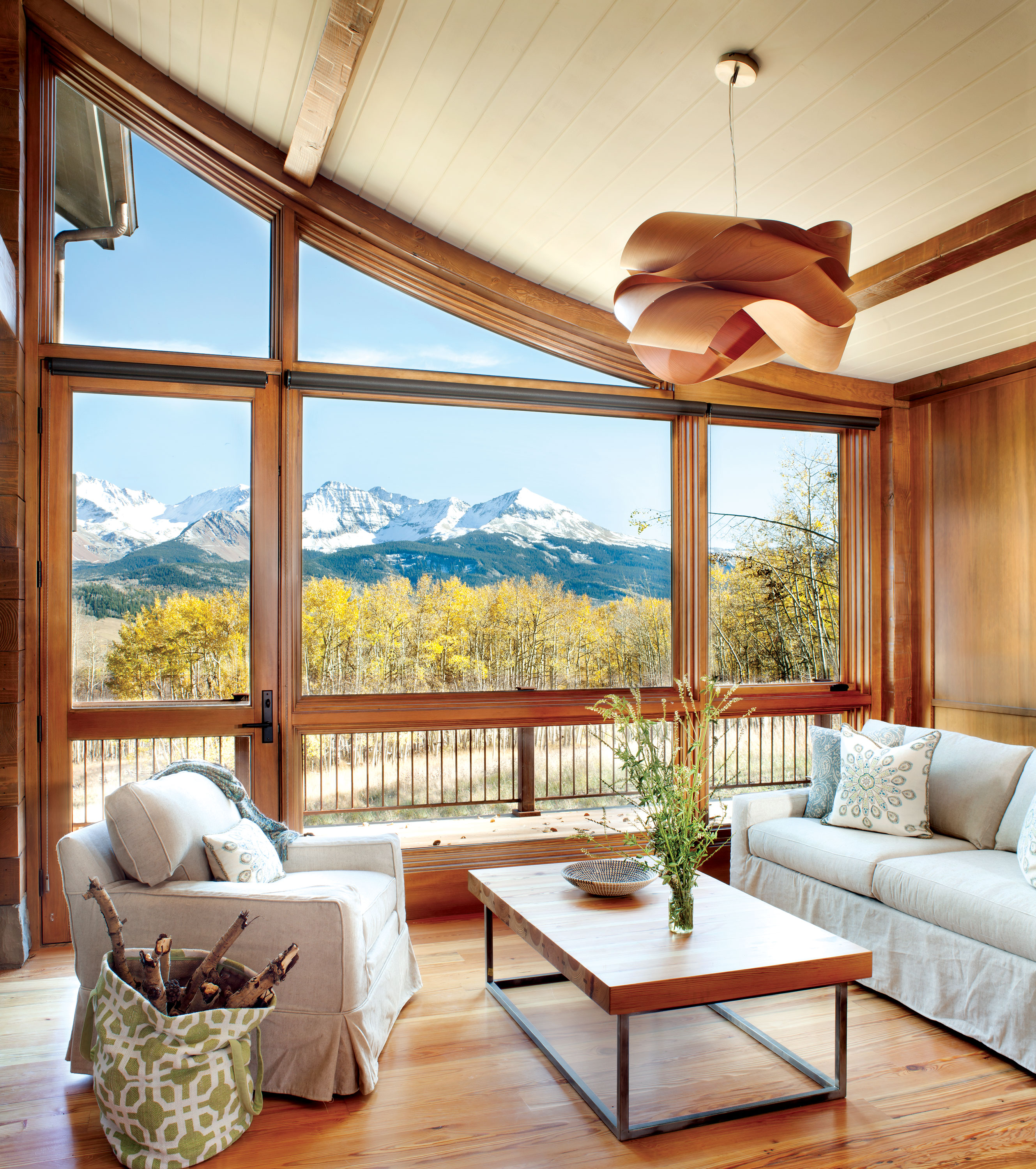 Flexibility in the home’s interior design was important to the homeowners, who selected details and furnishings, with the help of Jean Verbridge, that were clean, contemporary and warm.

The home’s large foyer is a welcoming entry and the perfect place to display pots by renowned Japanese potter Hideaki Miyamura. 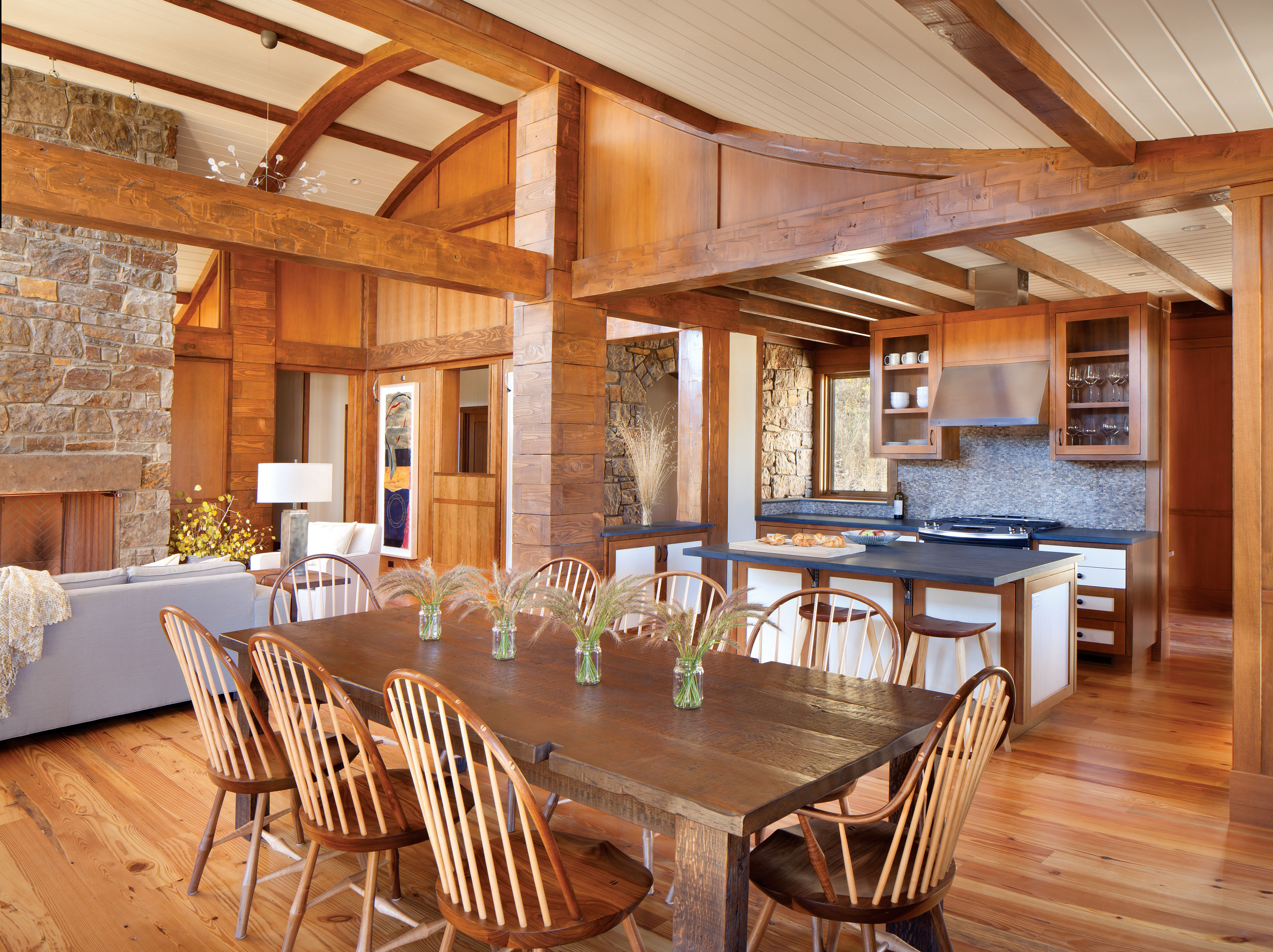 The home’s open floor plan flows from one area to the next. Elements of the traditional log cabin aesthetic were updated to capture the spirit of Telluride. 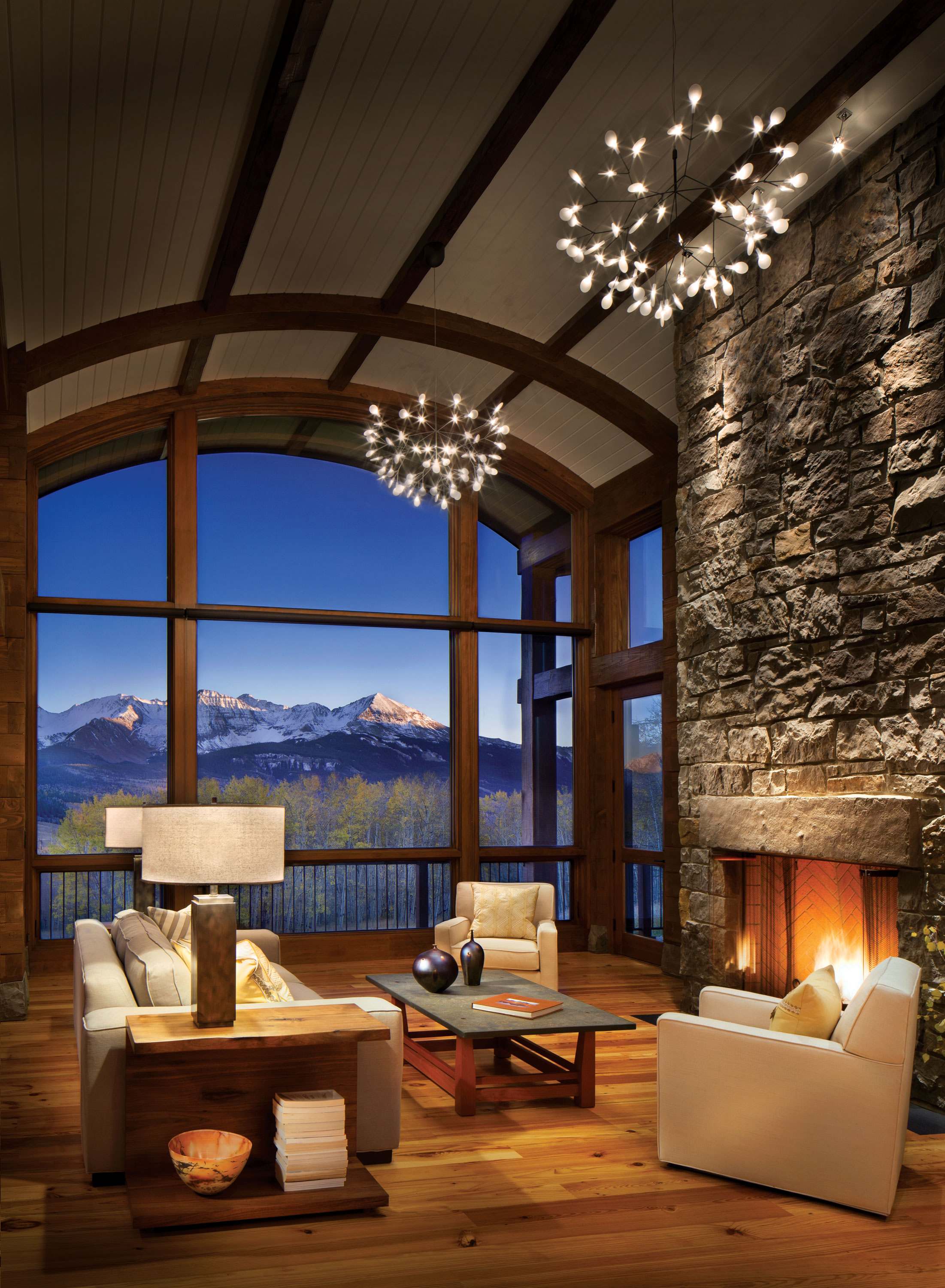 Custom floor to ceiling windows line the home’s facade. In the great room, the sculptural roof captures the view and adds height to the home’s primary volume. The space was softened with chandeliers that evoke the aspens found outside. (Click image to expand.) 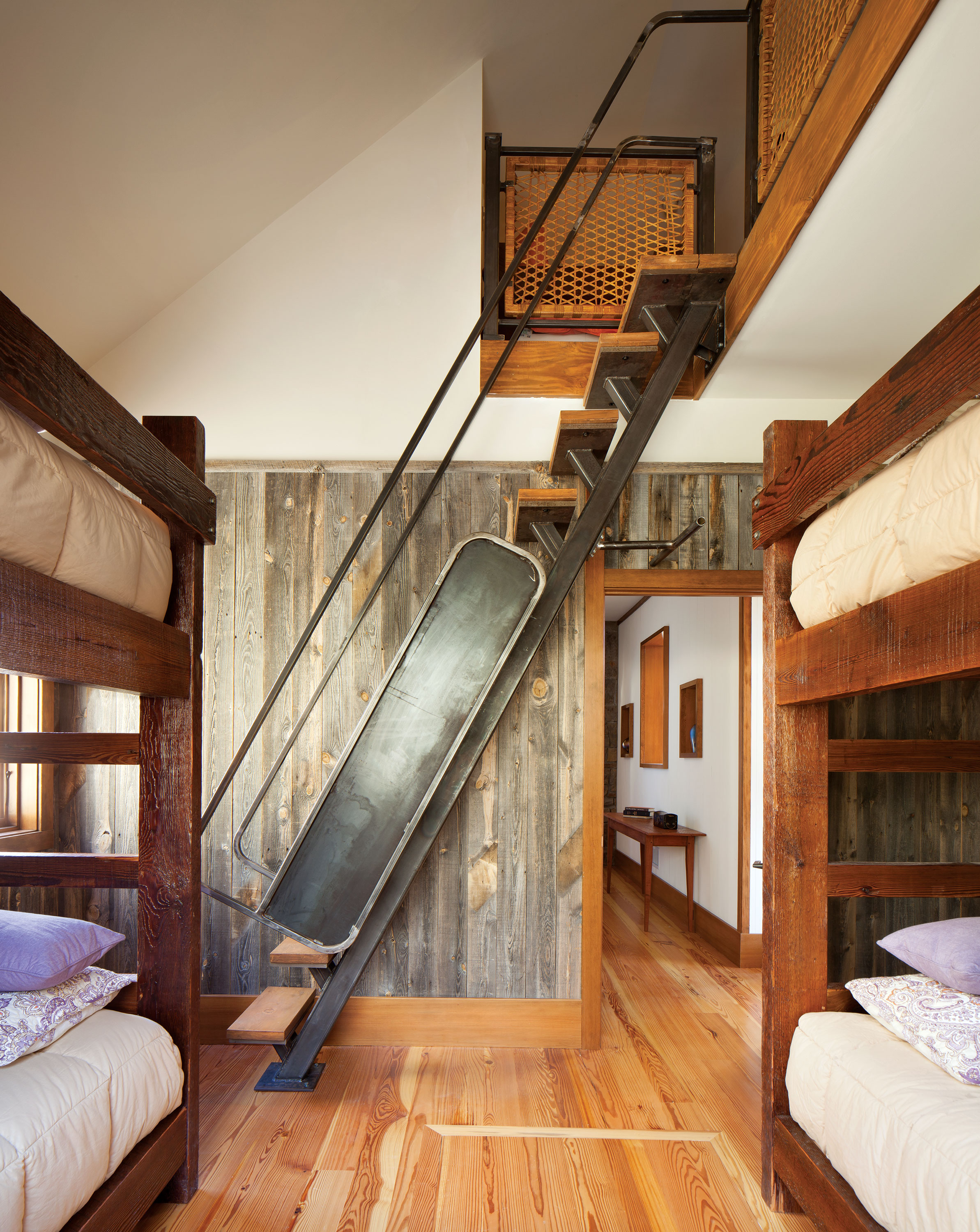 The loft, located off of the bunk room, includes architectural details of an utilitarian steel ladder and upstairs railing made by a snow shoe company. 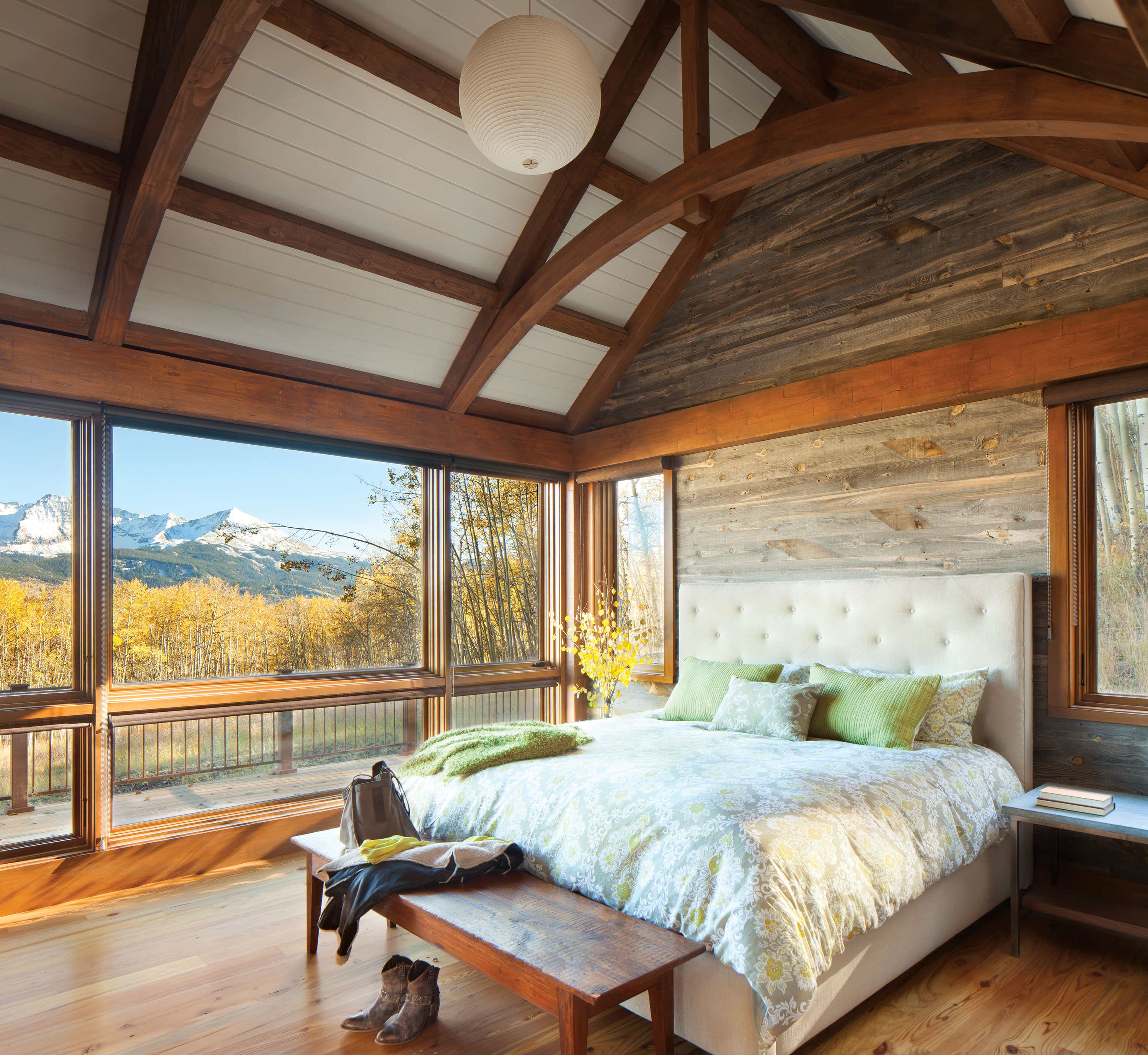 Snow fence, a thematic material used throughout, appears on the wall behind the bed in the master bedroom.