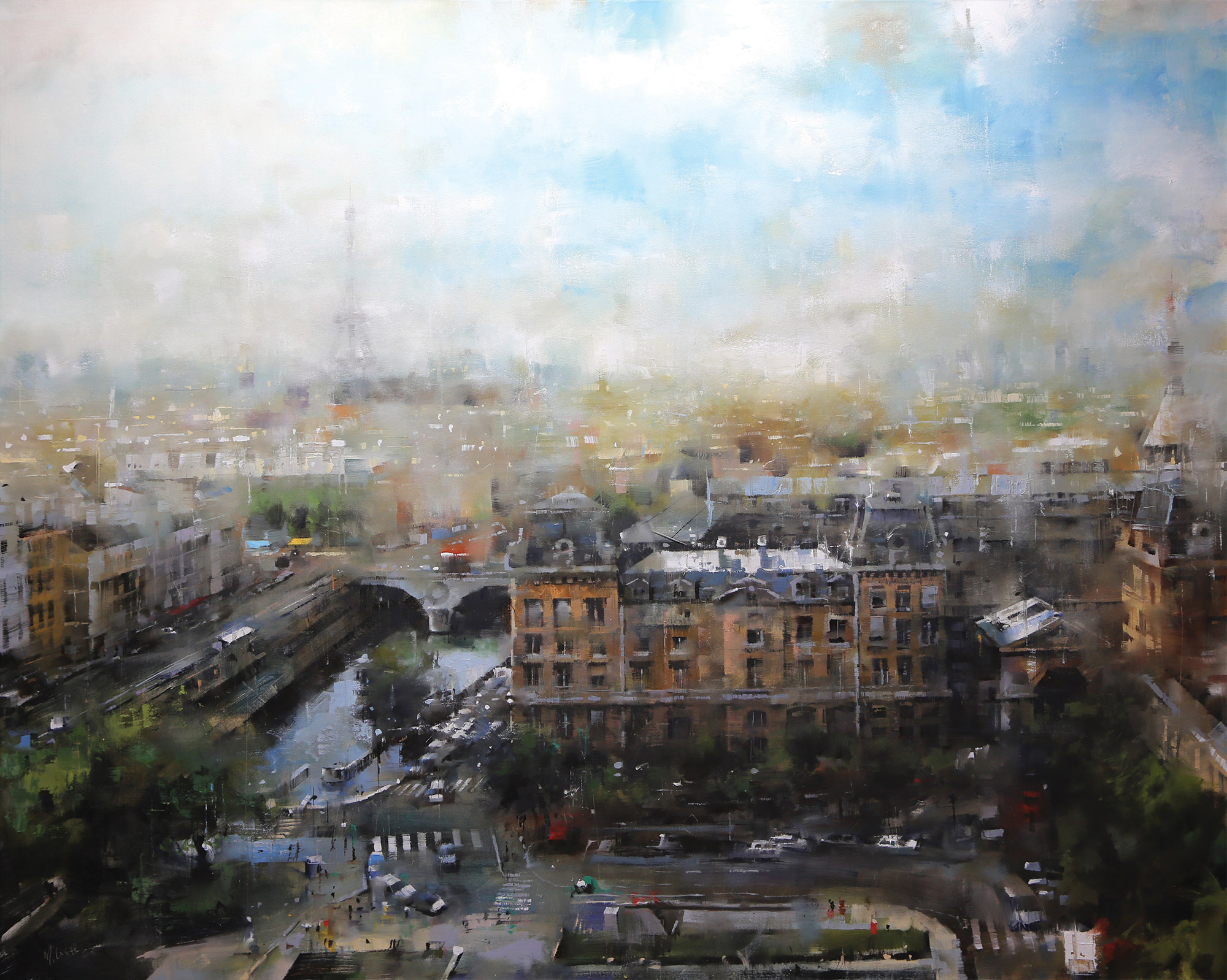 17 May Master of Light

WITH A LOOSE, PAINTERLY STYLE, Mark Laguë conveys familiarity through a fog of abstraction. The artist directs our gaze with hard and soft edges, his compositions bring us somewhere concrete while the out-of-focus areas blur, fading into our imaginations. His work shares the sensation of a place or subject. By observing, we experience his dreamscape.

“When looking for a relationship between Laguë’s work and traditional Western art one needs to look no further than his ability to tell a story while simultaneously capturing the specific essence of a moment in time,” says Michael McCormick, with Horizon Fine Art Gallery. “These moments unfold in different ways, whether it is through precise mood, an animated gesture or even movement.”

Born in Quebec, Canada, Laguë was interested in drawing from an early age and practices this skill daily. After graduating from Montreal’s Concordia University in design, he worked for 13 years in the animation industry as a background designer and art director. During that period, he won numerous awards for his watercolor paintings, a skill he pursued on the side while working full time.

In 2000, he switched to oil painting and won several international awards in that medium. The most outstanding was the BoldBrush Art Competition for his oil Over Paris. This award gave the artist confidence to canter forward as an inventive master of light and full-time painter in 2002.

For Laguë, the most exciting part of painting has always been the study of light. “Whether it was the great masters of the Renaissance, the French Impressionists or the many contemporary painters that I admired, the one thread that was common to all of these works was an advanced understanding of light and how to use it dramatically,” Laguë says.

The painter is enchanted by the ways in which light reflects on architecture. From Paris to San Francisco, New York and Montreal, he captures unique place-based detail with gestural brushstrokes. Laguë’s upcoming solo exhibit at SmithKlein Gallery in Boulder, Colorado, will feature large aerial cityscapes. The opening takes place on June 3, and the show will hang through the end of the month.

“Many times people think of American Western art when the term Western art is brought up, but Western art in an international context goes far beyond horses and cowboys,” says Lize Brittin, manager of SmithKlein Gallery. “While Mark doesn’t lean toward what most people see as traditional Western themes in his paintings, his mixture of Impressionism and Realism is a style that’s new yet somehow familiar [to the genre].”

In his resilient, gleaming New York Sun, lines of paint drip across the canvas, correlating to the edges of buildings and streets. Light is the focus of the painting, and as though the canvas were imbued with energy, its brightness commands our gaze.

“Owners of Mark Laguë’s paintings in 20 to 30 years from now will still be stopped in their tracks and forced to wonder at his vision of the world and his capacity for capturing moments within it,” says Barbara Nowak, owner of Horizon Fine Art Gallery.

In describing his technique, Laguë says the thin vertical lines running through the painting were scraped into being with a palette knife “organically, as part of the painting process.” He begins each work with a base drawing and then establishes value. He moves on to complete the focal area of the painting. Next, he creates depth, adds color and further fills in the shape.

“The blocks of colors in the buildings correspond to the squares on the street in a way that lends to the balance and harmony in the work,” he says of New York Sun. “The dark horizontals and the oblique shapes lend to the necessary tension.”

Laguë says he’s more interested in establishing the composition and a mood than being true to his reference. “I greatly simplified the shapes on the distant buildings in order to give a feeling of depth, and also to give more impact to what I wanted to be the main focal area in the painting,” he says. “There is a dual meaning of capturing this kind of moment to me. The first is that I was trying to capture the hazy city feeling you get in Manhattan on a hot, sunny day. The second is that I was going for an ethereal, dreamlike state, which is precisely how I feel every time I go to New York City.”

In the pastel-colored Montreal Turquoise Rain, there is a rhythmic feeling of bright sunlight cascading across a rain-soaked street. The black streets and windows balance shiny drips of paint, luminous terraces and flashy car headlights. Pastel pinks and turquoise are bright, punctuating, while the rain softens the canvas with tepid blue-grays. There is a balance. We see the city’s season of colors.

“I usually don’t begin a painting with such a clear idea of where I want the work to go, but in this case I really had conviction that a monochrome, turquoise-gray mother color was what this painting needed,” Laguë says. “Given that, I felt a few strategically placed touches of cadmium red would be just enough of a foil to the turquoise to give warmth and brightness to an otherwise gloomy scene.”

Moving forward with this creative vision, Laguë plans to expand his inventive techniques of altering planes. From street scenes to figurative work, wide angle to aerial, Laguë’s brush will guide us through his representational abstractions, continuing to show us an artist’s translation of light. 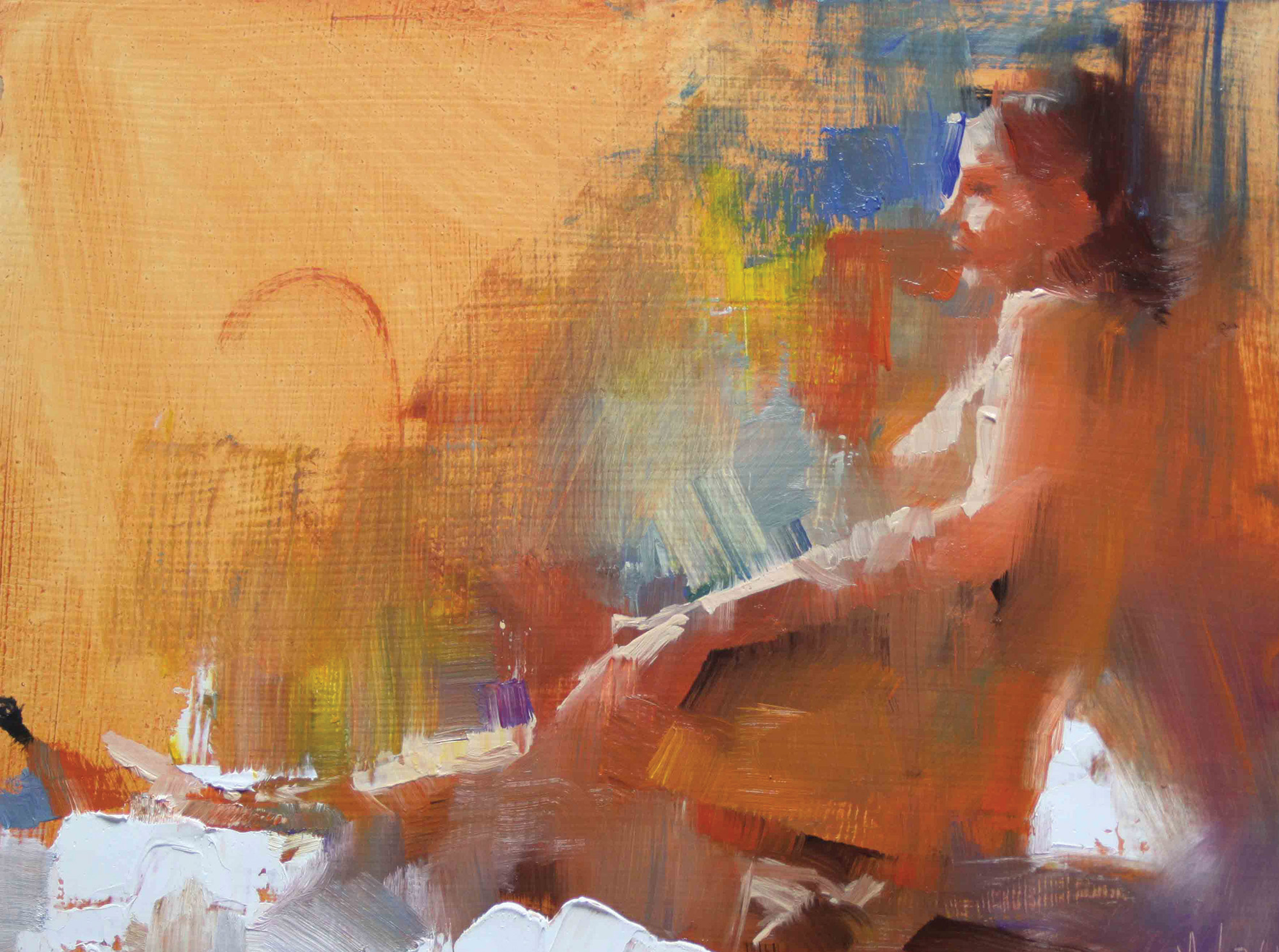 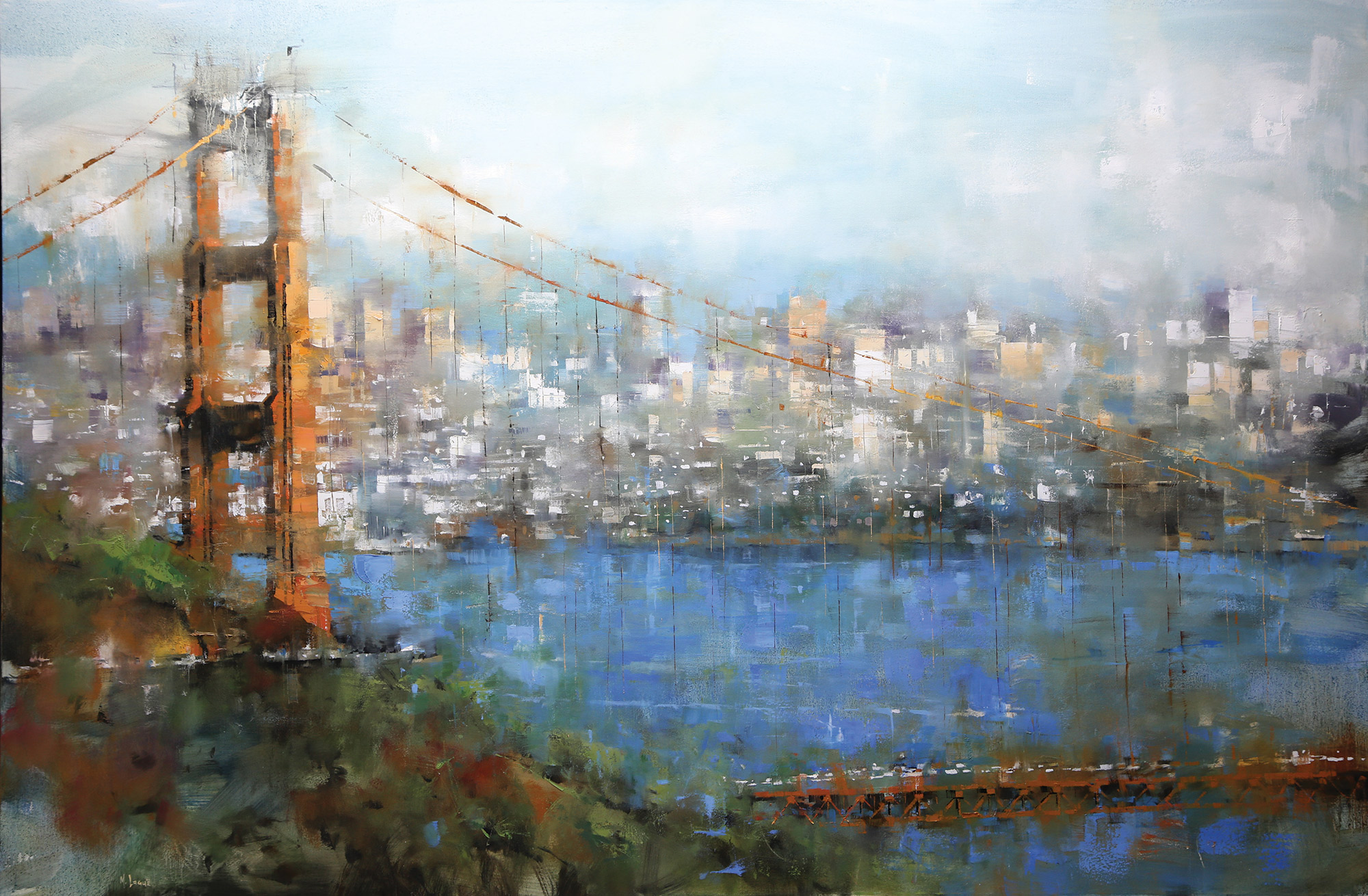 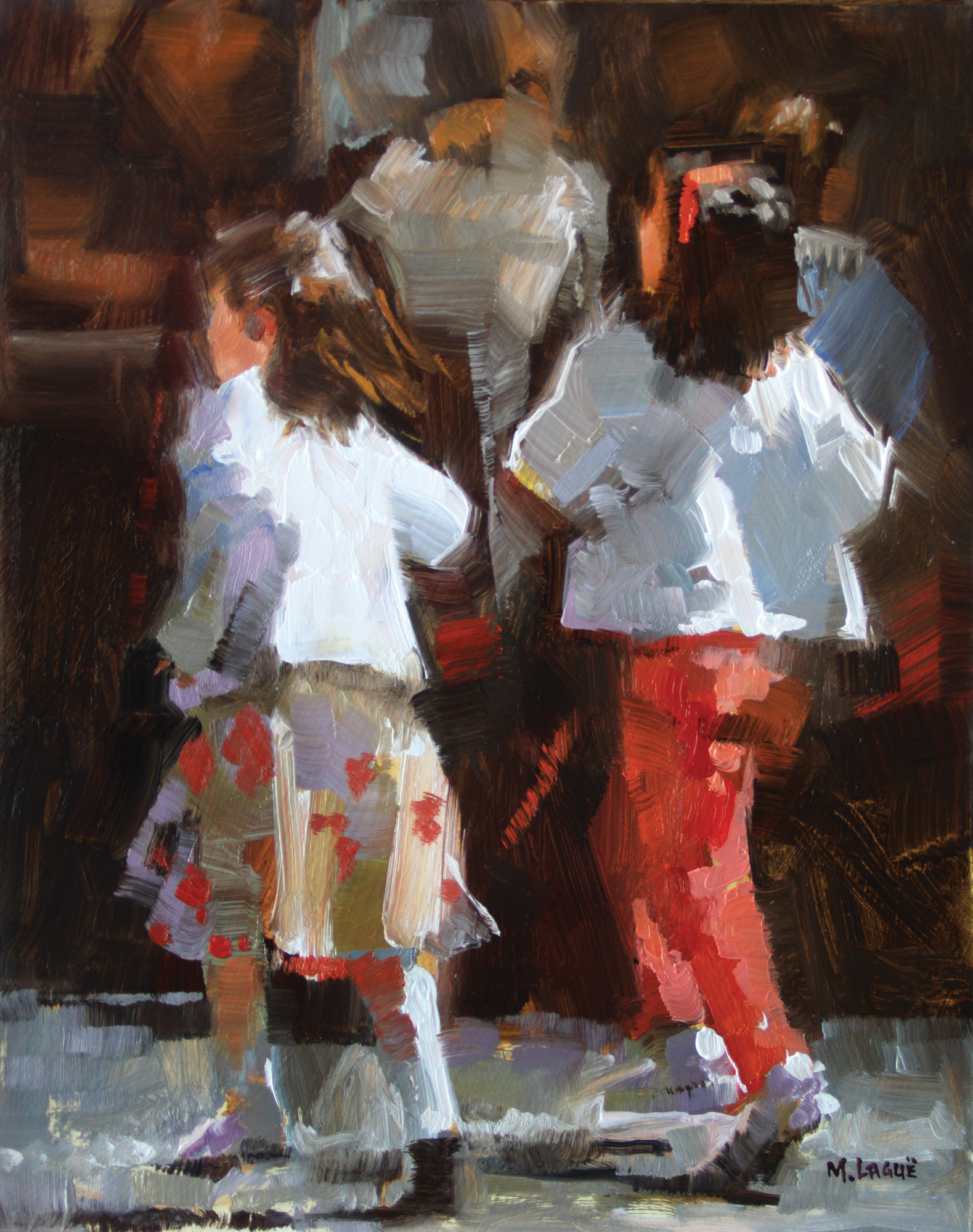 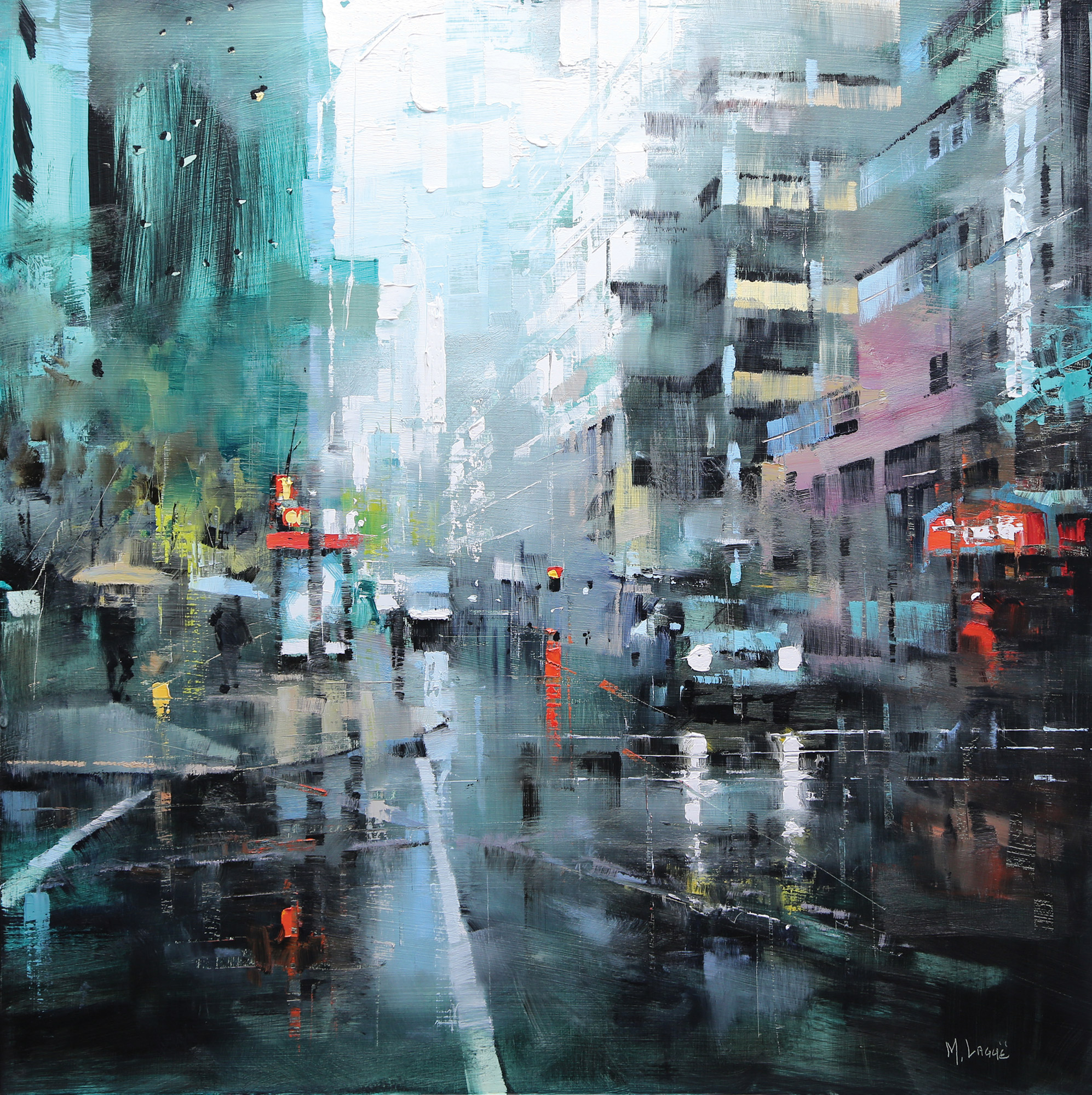 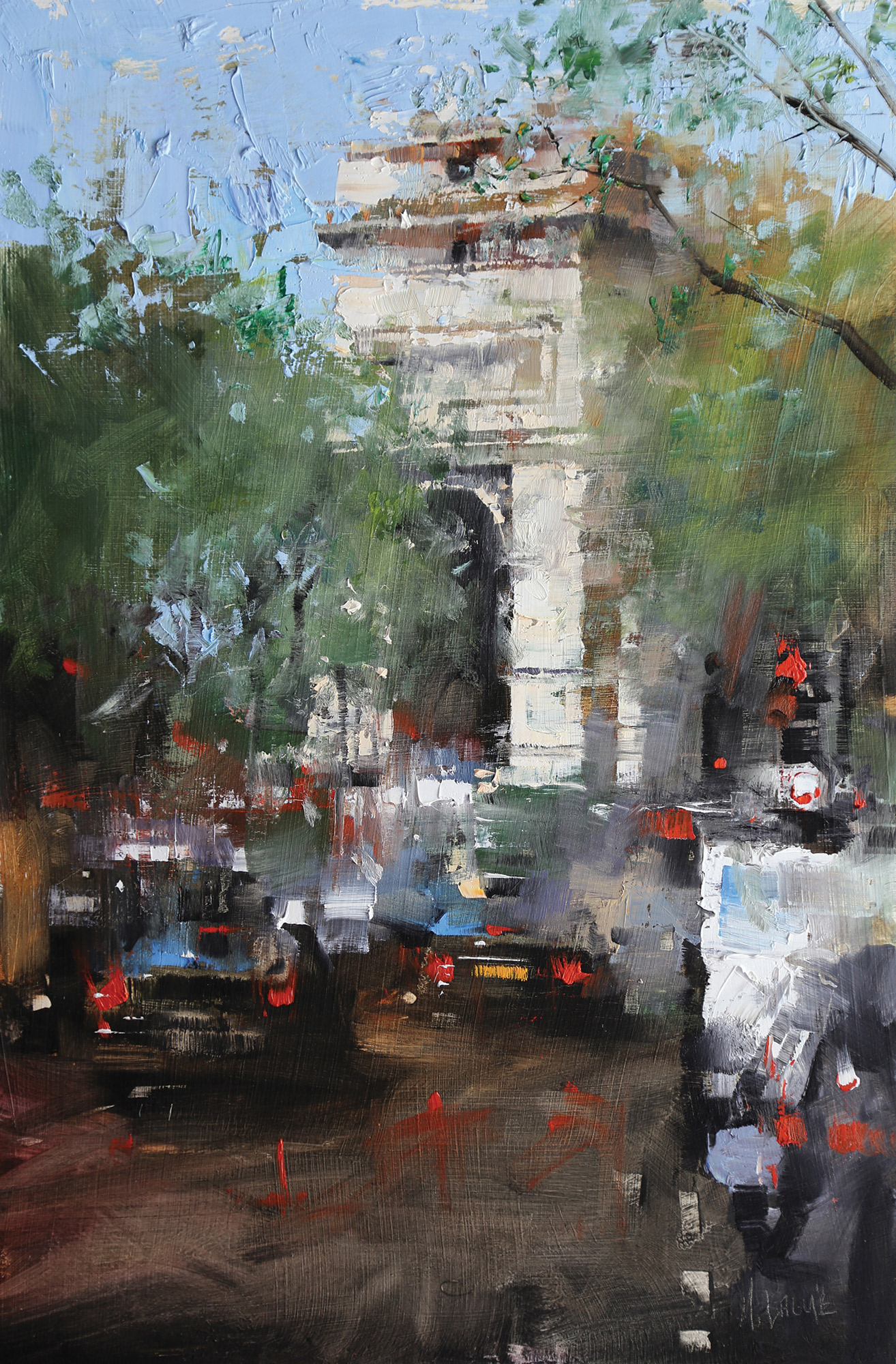