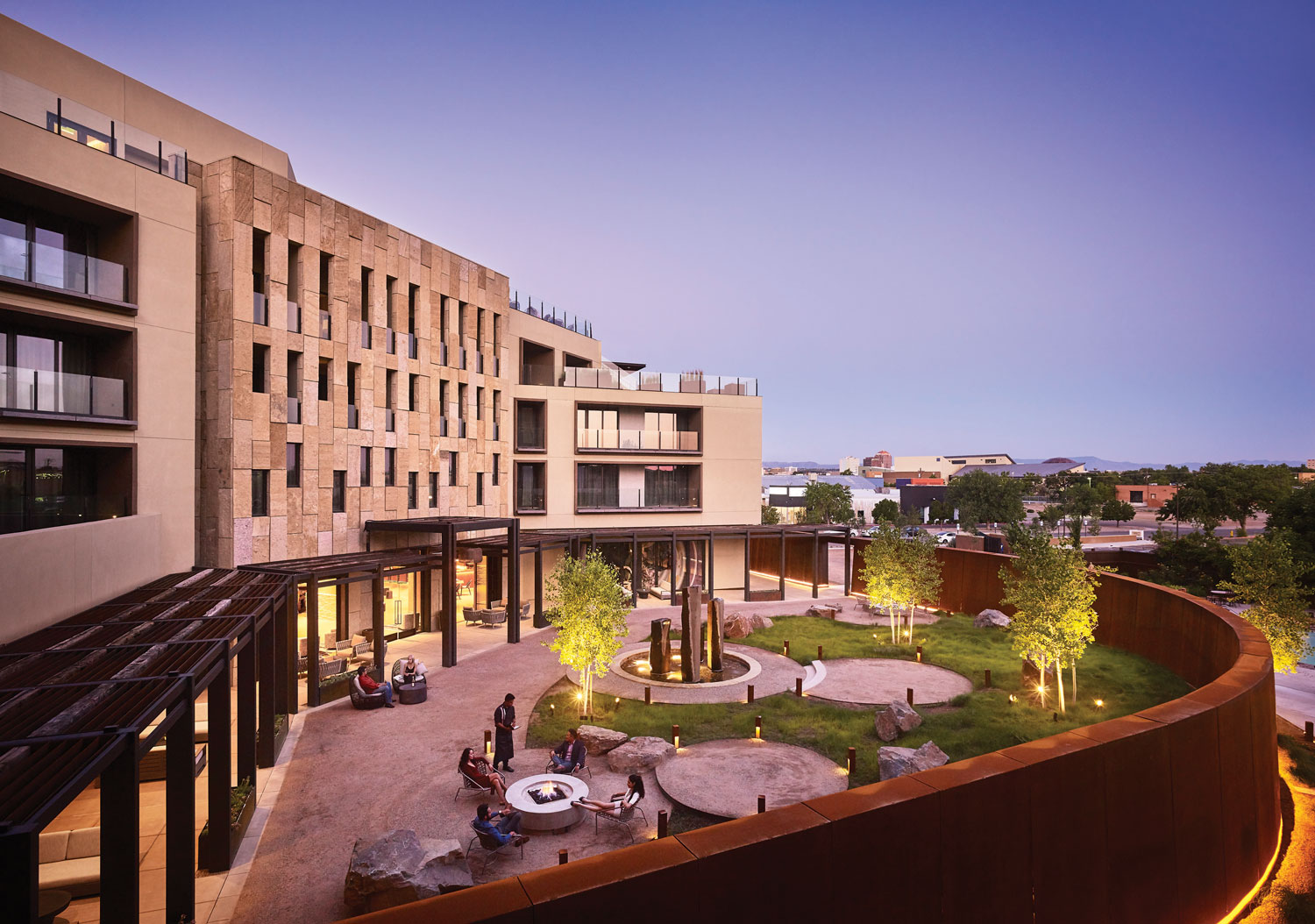 AS ONE OF ONLY 23 UNESCO WORLD HERITAGE SITES in the U.S., New Mexico’s Chaco Canyon was occupied by the Pueblo people between 850 and 1250 A.D. Home to thousands, the community consisted of the largest collection of buildings in North America until the 1800s. The early Puebloans used complex engineering to create their settlement, complete with an irrigation system that harvested rain run-off from the surrounding cliffs. Embedded throughout the architectural design are features important to the social and religious life of the people who lived there. 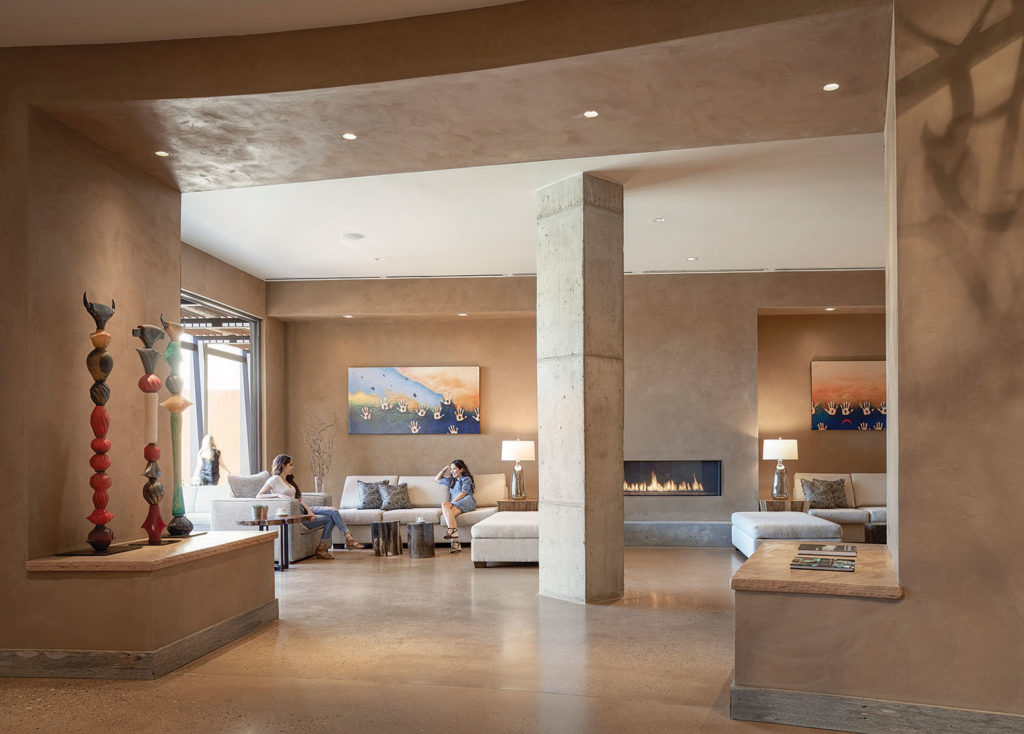 It was this unique, historic site that inspired the art and architecture of one of Albuquerque, New Mexico’s newest resorts, Hotel Chaco. James Long, founder and CEO of Heritage Hotels, is a 12th-generation New Mexican with a reputation for creating accommodations that reflect the local community. Hotel Chaco is his first hotel imagined from the ground up.

From the front entry, guests are immersed in the spirit of the culture. 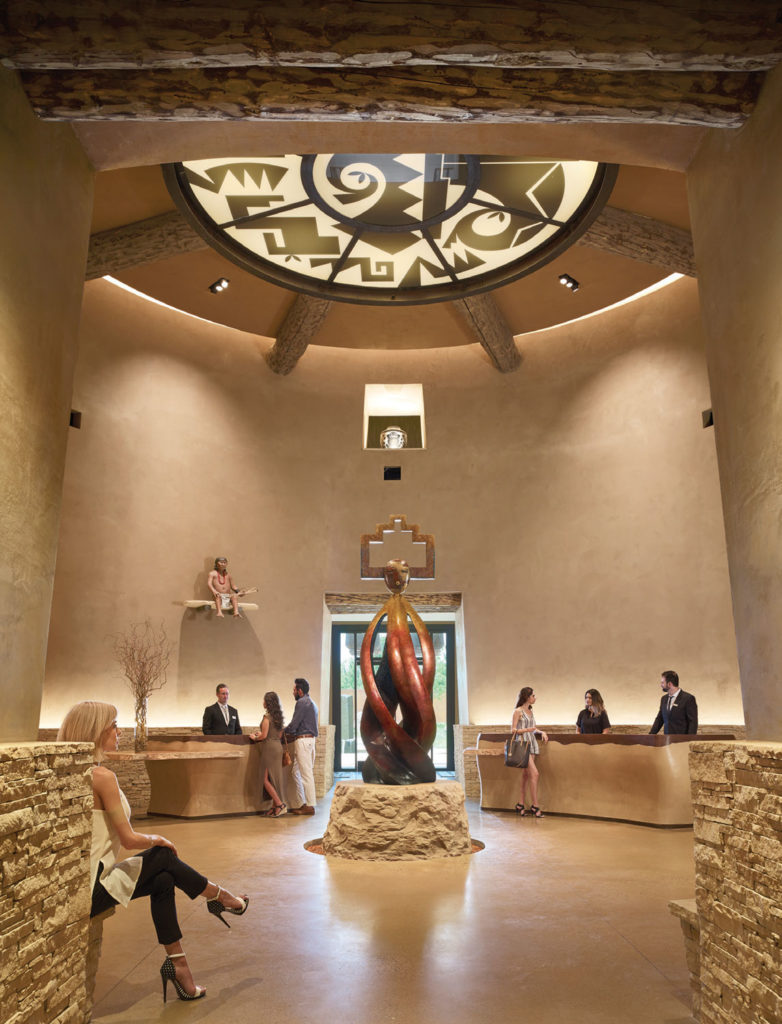 Hotel Chaco’s circular lobby and entrance design was inspired by the architecture at the historical site. Stacked stone is used throughout the main floor, highlighted by recessed rock and wood elements. Roxanne Swentzell’s sculpture The Guardian (upper left) watches over the lobby.

Native American artists were selected to create special artworks that reflect ancestral themes. The heavy front doors, created by Tammy Garcia (Santa Clara Pueblo), are a modern interpretation of the famous black-on-black Santa Clara pottery. The design features Avanyu, the Tewa water serpent depicted in petroglyphs in Chaco Canyon and repeated in many spots in the Southwest.

Guests enter the hotel through a small, round space and walk past niches on either side — one representing fire, the other water — into the lobby. Stacked-stone walls echo the intricate stonework at Chaco. 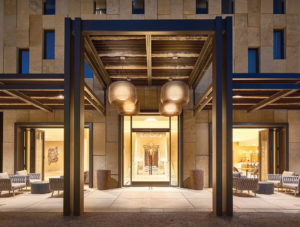 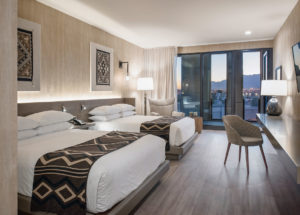 The lobby is reminiscent of a kiva, an underground sacred space for Puebloans, in its circular shape. In the center of the round room stands Oneness, a sculpture by Joe Cajero (Jemez Pueblo), representing the “unity with nature of body, mind, and spirit; the convergence of male and female; and the returning to the source, the Earth.” A blessing ceremony was held at the installation of Oneness and sacred red dirt from the Jemez Pueblo encircles the base. Above the sculpture, an oculus by Garcia draws viewers’ eyes skyward.

Overlooking the lobby is The Guardian, a sculpture by Roxanne Swentzell (Santa Clara Pueblo). This figure, a sort of Native American guardian angel, watches and judges the rightness of the spirits of those who approach. The Guardian holds a bow which was owned by the sculptor’s grandfather. 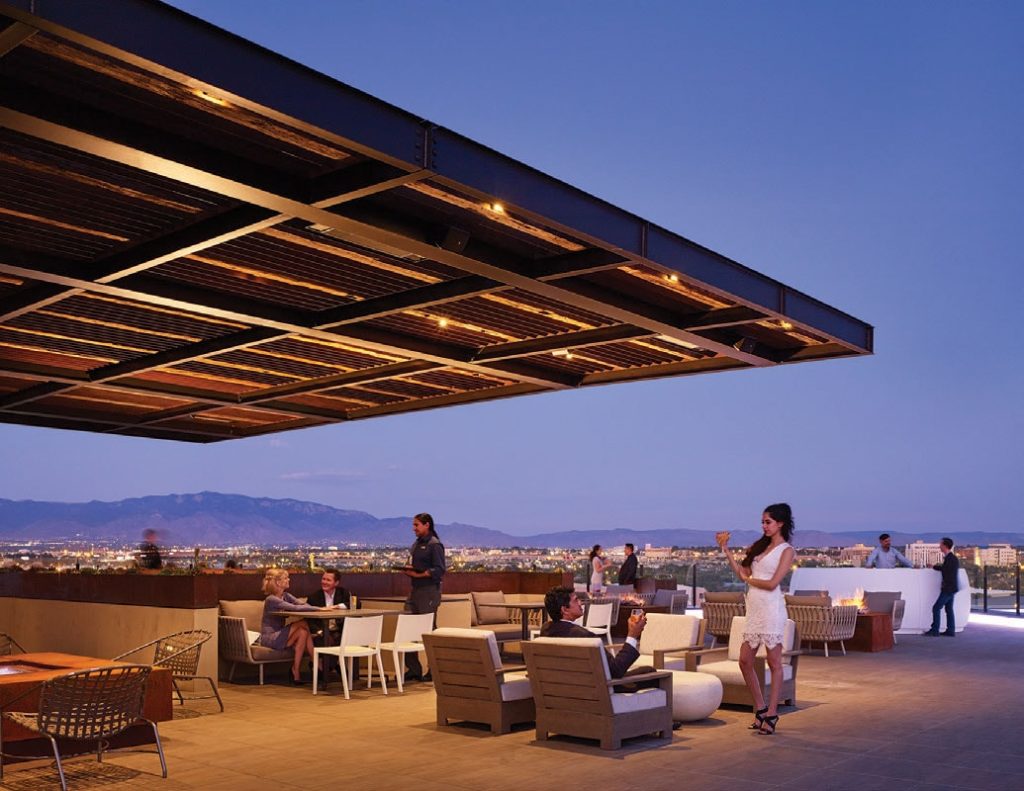 Level 5, Hotel Chaco’s rooftop restaurant and lounge, is an homage to Chaco Canyon’s Pueblo Bonito, which had five levels. From here, guests enjoy panoramic views of the Sandia Mountains, the downtown skyline, historic Old Town, and the property’s desert gardens and pool.

Kris Lajeskie Design, of Santa Fe, planned the hotel’s interiors and curated the art, which was produced by a number of other, well-known artists, including Tony Abeyta (Diné), Ira Lujan (Taos, Ohkay Owingeh pueblos), Rhett Lynch (Diné), Marla Allison (Laguna Pueblo), and many others. 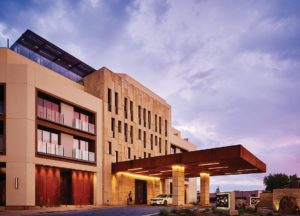 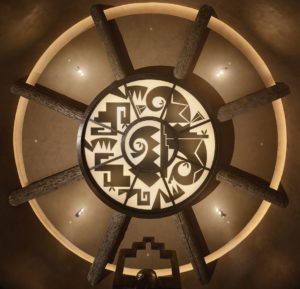 Hotel Chaco’s circular lobby and entrance design was inspired by the architecture at the historical site. Stacked stone is used throughout the main floor, highlighted by recessed rock and wood elements. Roxanne Swentzell’s sculpture The Guardian (upper left) watches over the lobby.

The hotel is California-based Gensler Architects’ first design project in New Mexico. Members from the firm actually camped out in Chaco Canyon for inspiration, resulting in a design that honors the architectural history of the Pueblo people.

Materials used in the construction of the hotel depended heavily on stone and native woods. Even the restrooms feature special touches — in one, the sinks are made of petrified wood. Guest rooms are decorated in earth tones and Two Grey Hills-style; hand-woven rugs from the Toadlena Trading Post decorate the walls.

Nature provides the décor in Level 5, the rooftop restaurant and deck that attracts guests with a spectacular view of the Sandia Mountains. Food, too, reflects locale, and even the uniforms worn by employees were inspired by Chaco pottery shards and were created by fashion designer Patricia Michaels.

Together, artists, architects, and designers brought the vision of the hotel’s founder into being — to celebrate the ancient artists and architects of New Mexico. Hotel Chaco is more than an homage; it is a love letter.