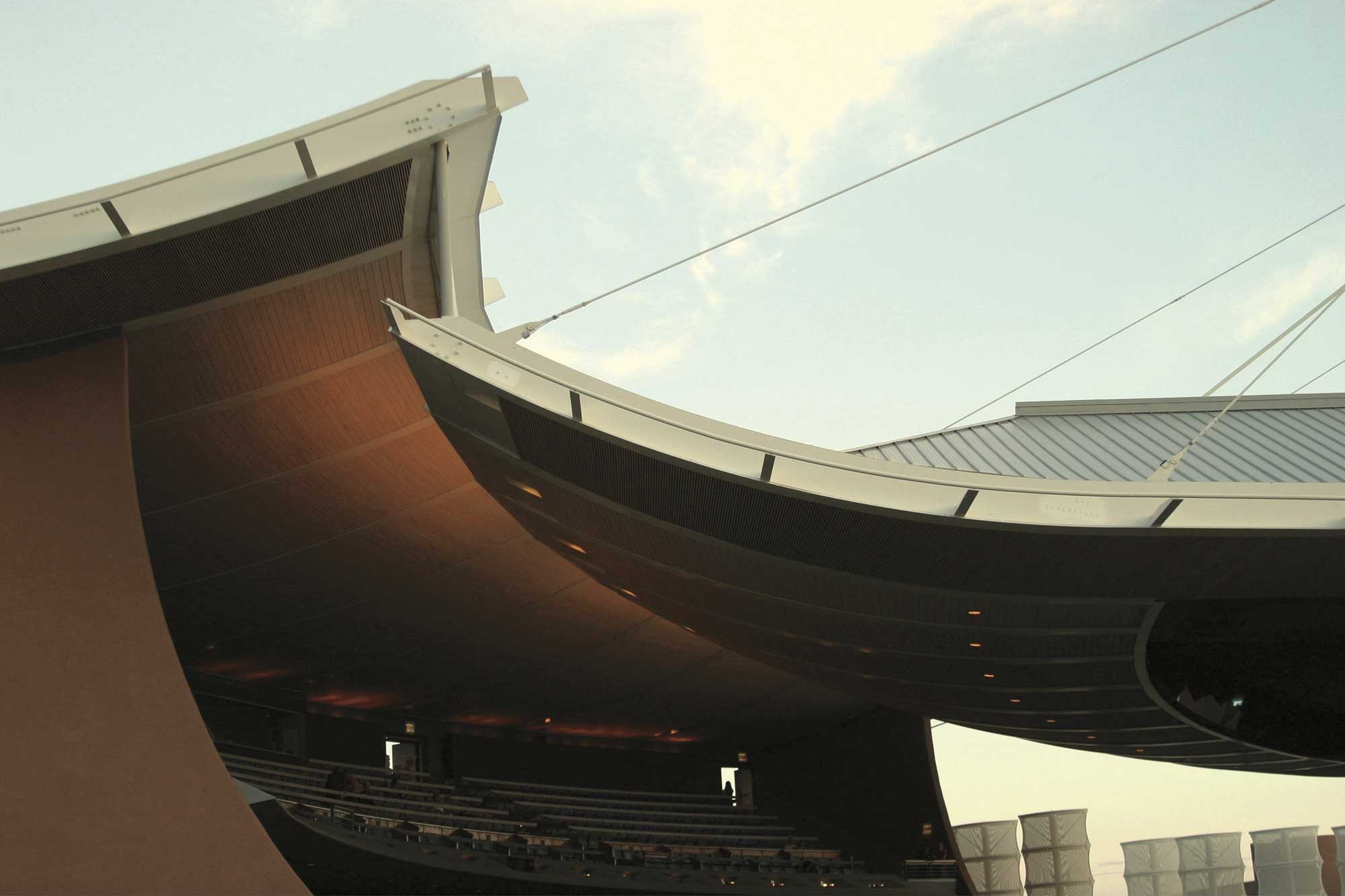 The Santa Fe Opera performs to sold-out crowds in this open theater.

As the sun settles on a warm velvet evening, we drive north of Santa Fe to the acclaimed Santa Fe Opera. The open-air amphitheatre, a modern sweep of adobe, rises from a mesa overlooking the Sangre de Cristo and Jemez Mountains at the southern tip of the Rockies. Dressed in evening wear, we step from the car and — I could not make this up — folks are tailgating at the opera! Tables are set up behind vehicles in the parking lot and spread with linen cloths, candlesticks, wine and cheese. Right beside an elegant table with a butler is a pickup bed, spread with a Navajo blanket, fruits, breads and salads. There’s a relaxed air and we’re invited to join a group. Most wear evening attire, but I spot cowboy boots, tight blue jeans and a sequined top. Minutes before the opera begins, the theatre fills. The backdrop is an astonishing sunset fading into the night. Opera redefined.

Maybe it’s the dichotomy of the region that’s so intriguing — rustic sophistication, cultural diversity, high desert, mystical spirituality, historic, yet hip. You simply have to surrender to the earthy, colorful, casual allure of Santa Fe.

Santa Fe’s heartbeat is art — or is it history — or architecture? Here we go again with that tug of harmonious diversity. There is a perceptible aura of art in the city. One of the world’s major art centers, it has the highest rate of art business per resident of any city in the nation. In 2005 it was designated by UNESCO as America’s first ‘Creative City.’ At the turn of the last century, a migration of artists founded the art colonies and established the region as an art center. In 1918 W. Templeton Johnson wrote in Art & Archaeology, “Why should it not become a great center for art and culture? … In the art colonies of Taos and Santa Fe there are men of national reputation. There is probably no city of twice its size in the United States that has half its enthusiasm for art and archaeology.”

Take off walking in any direction from the Plaza to find the artisans, galleries and museums that make up the art scene today and set the historic background of the city. The north side of the Plaza at the Palace of the Governors is a good place to set your historic compass. It’s the oldest seat of government in the United States, established as a capital by the Spanish in 1610. In its history have flown the flags of Spain, Mexico, the Confederacy and the United States. The Pueblo Indians occupied it in 1680 for 12 years and almost 200 years later, in the 1870s; Territorial Governor Lew Wallace wrote part of Ben-Hur while living in the Palace. Santa Fe is the second oldest city in the country (after St. Augustine, Florida), and claims the oldest house and one of the oldest churches still in use. There’s some serious history going on here. On the portal in front of the Palace, Pueblo Indian artists have sold their jewelry and pottery since the 1930s.

A distinctive and diverse regional menu has evolved in Santa Fe — nuevo New Mexican cuisine with chile the undisputed universal ingredient. The locals have breakfast at the Plaza Café and enjoy Blue Corn Piñon Pancakes or a delicious crusted French toast. Karen, the waitress, works her cheerful magic in tandem with the pick-me-up cup of coffee. La Casa Sena, in the hub of the city, is perfect for lunch. In the courtyard, shaded by a huge old cottonwood, a lovely fountain provides a sculptural element and vines, shrubs and flowers spill randomly from stone borders. Re-energize with the Sena Sampler and you’ll be ready to take to the streets and discovery. The Guadalupe Café serves good, traditional New Mexican cuisine as does Tomasita’s, one of the most popular restaurants in town that serves it up hot (chile) to a lively crowd. Offering elegant dining, La Casa Sena’s executive chef Patrick Gharrity elevates cuisine to an art form and the Amavi Restaurant raises eyebrows with surprising flavors.

Take an afternoon to explore a concentration of some 80 galleries on Canyon Road. Just off Canyon Road on Paseo de Peralta the Gerald Peters and Nedra Matteucci Galleries specialize in classic Western art with a strong showing of Santa Fe Colony and Taos Society artists, in addition to contemporary art.

What defines the current art of Santa Fe? Artist Jeff Brock, who carves stone fetishes, says, “It’s more modern — edgier, but linked to the past.” His wife, Star York, creates monument-sized bronzes, which are not mere arrangements of lifelike models, but luscious shapes with unpretentious grace. She says, “The culture supports the arts and artists are considered serious professionals.” What do they do for fun? A fox hunt in the strictest English tradition in the high desert of New Mexico! The Casa Ladrons are a group who hunt coyotes rather than fox by necessity; they named themselves after the mountains which were tagged for the banditos who hid out in them. Life and art are edgier in Santa Fe.

Institutions of culture celebrate and showcase the arts. The New Mexico Museum of Art is a legacy from the artists of the 20th century who drew national and international acclaim to the region — from the Abstract Realism of Russian ex-patriate Nicholai Fechin to the over-scaled abstracts of Georgia O’Keeffe; the color woodcuts of Gustave Baumann to the distinctive art of the Taos Society Artists and Santa Fe Art Colony.

The Georgia O’Keeffe Museum exemplifies her rather exotic lifestyle of defiant independence. We left with a new perspective on a woman whose life was art.

The artistic verve is carried out in the rich textures and curves of adobe in most structures from the ancient mission churches — crude, primitive and majestic — to modern homes, hotels and museums. There are no buildings scraping the sky in this city. The architecture that rises from the earth, emulating the mesas and cliffs, did not just happen. The Historic District Ordinance, passed in 1957, created a review board to approve architecture in the historic districts — think adobe, vigas, earth tones and height restrictions. It has caused years of controversy, but the effect is natural and harmonious. Way back in 1918, W. Templeton Johnson wrote, “It would be a brave man who would commit an architectural monstrosity in this environment.” Indeed.

San Francisco Street comes to a halt at the imperial St. Francis Cathedral, which reigns over the city in French Romanesque style. The building code was not yet established in 1869; however, the umber sandstone does blend with adobe. Bishop Lamy built the cathedral and the Loretto Chapel for the Sisters of Loretto in 1873.

Apparently, in the chapel, the architect forgot to include a stairway to get to the very high choir loft, which seemed an impossible obstacle, as there was no room to incorporate one. The sisters appealed to St. Joseph, patron saint of carpenters. A man appeared on a donkey and built the “miraculous staircase” with a hammer, saw and T-square. Upon completion the sisters attempted to pay the carpenter, who had disappeared. The local lumberyard knew nothing of the project and the wood is not indigenous to the area.

The beautiful staircase makes two complete 360-degree turns with no supporting pole up the center and is an architectural and engineering phenomenon. Legend has it that St. Joseph himself built the staircase. In 2000, Santa Fe historian Mary Jean Cook concluded that the builder was a French craftsman who had migrated to a remote canyon in New Mexico. You choose. I like the quiet mystery.

It was our good fortune that the Santa Fe Desert Chorale was performing when we were in town. The men of the Desert Chorale strode into the Loretto Chapel with energy and purpose and it was clear that we were in for a strong, powerful performance. Their superb music filled the chapel to its 85-foot gothic rafters.

There’s a tri-cultural harmony of American Indians, Hispanics and Anglos with festivals, fiestas, markets and Feast days to celebrate them all. The historic and cultural complexity of Santa Fe have contributed to its art, which has recorded the true spirit of the region. There has been an esoteric mix of hand-carved, woven, forged and painted art from each cultural group inhabiting the area as far back as the Pre-Puebloan society. Here, there is a place for traditional as well as some of the more original and unsettling expressions of the artistic spirit. The International Folk Art Festival was instrumental in qualifying the city for the UNESCO designation. The most celebrated event of the year is Indian Market, held every August.

I admit, I found Santa Fe’s motto, ‘City Different,’ contrived. Now I understand. Santa Fe has always sensed it is a unique city. Its love of art, history and food, its multi-cultural diversity, its hospitality and its contrasts set it apart. Santa Fe has not — will not — conform. As the sun sets behind the opera stage our senses sharpen and we become aware this is a place where art and earth harmonize, and we applaud.

Inn on the Alameda

Inn and Spa at Loretto

330 East Palace Avenue | 505.986.0000 | Just two blocks from the Plaza, La Posada is an oasis in the heart of  Santa Fe with elegant rooms and inspired outdoor spaces.

Museum of New Mexico History (Palace of the Governors)

History and archeological buffs, there’s no shortage of Indian Pueblos, ruins and historic Spanish villages in the immediate area. For outdoor enthusiasts, the Rio Grande and its tributaries have worked thousands of years to provide canyons and gorges for scenic river rafting and fishing. Pick your season and hike, bike, ride horseback, cross-country ski or snowshoe through acres of wilderness in the Sangre de Cristo Mountains minutes from downtown Santa Fe. Nature shows off with fir, spruce and thick stands of aspen with their mystical white trunks and spectacular seasonal foliage — fall gets the press, but hot green spring leaves, whispery summer leaves and stark white winter branches have inspired the artists of the region for years. A popular trail for all hiking abilities is the Aspen Vista Trail. Locate the trail for you on www.santafe.org. 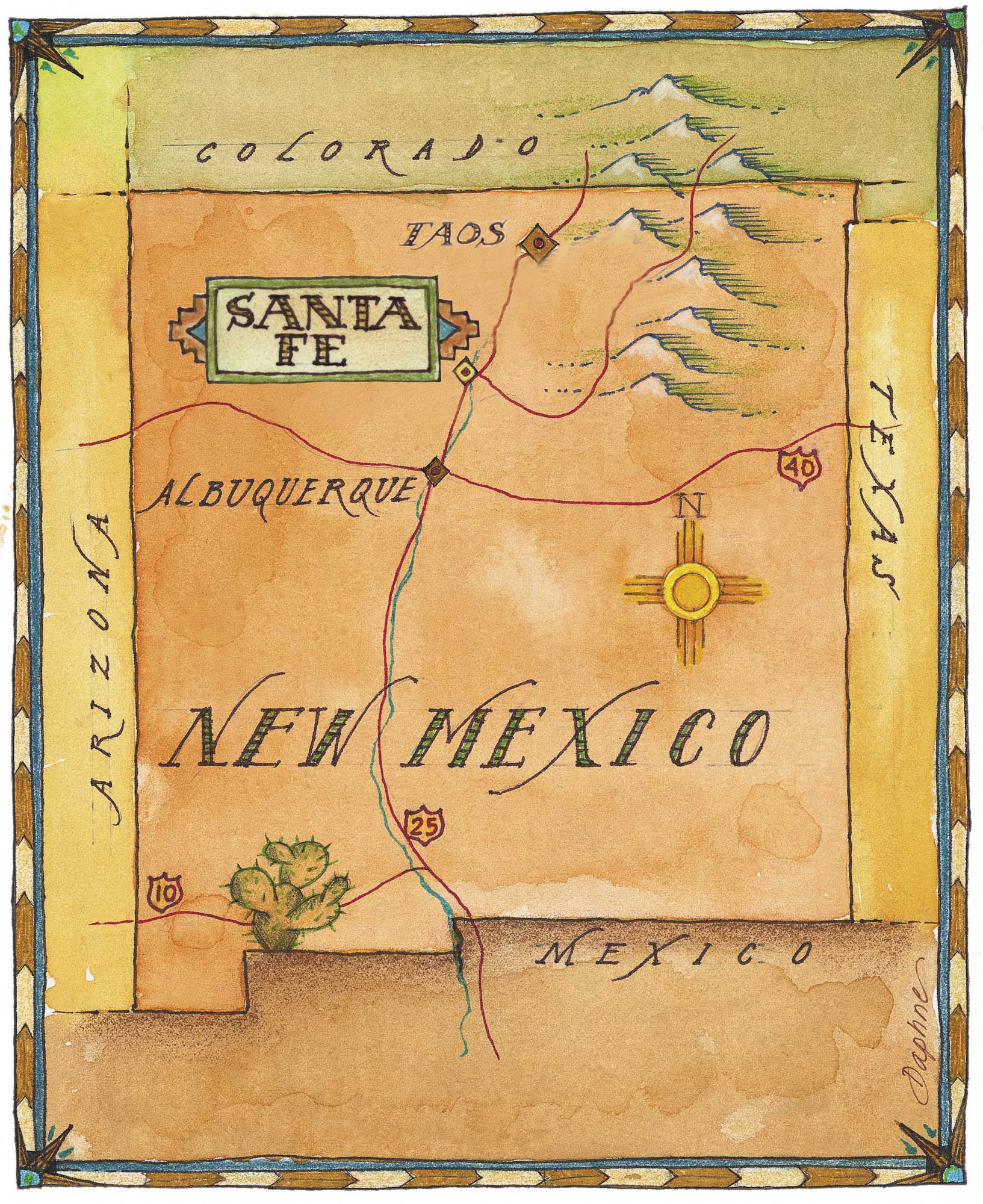 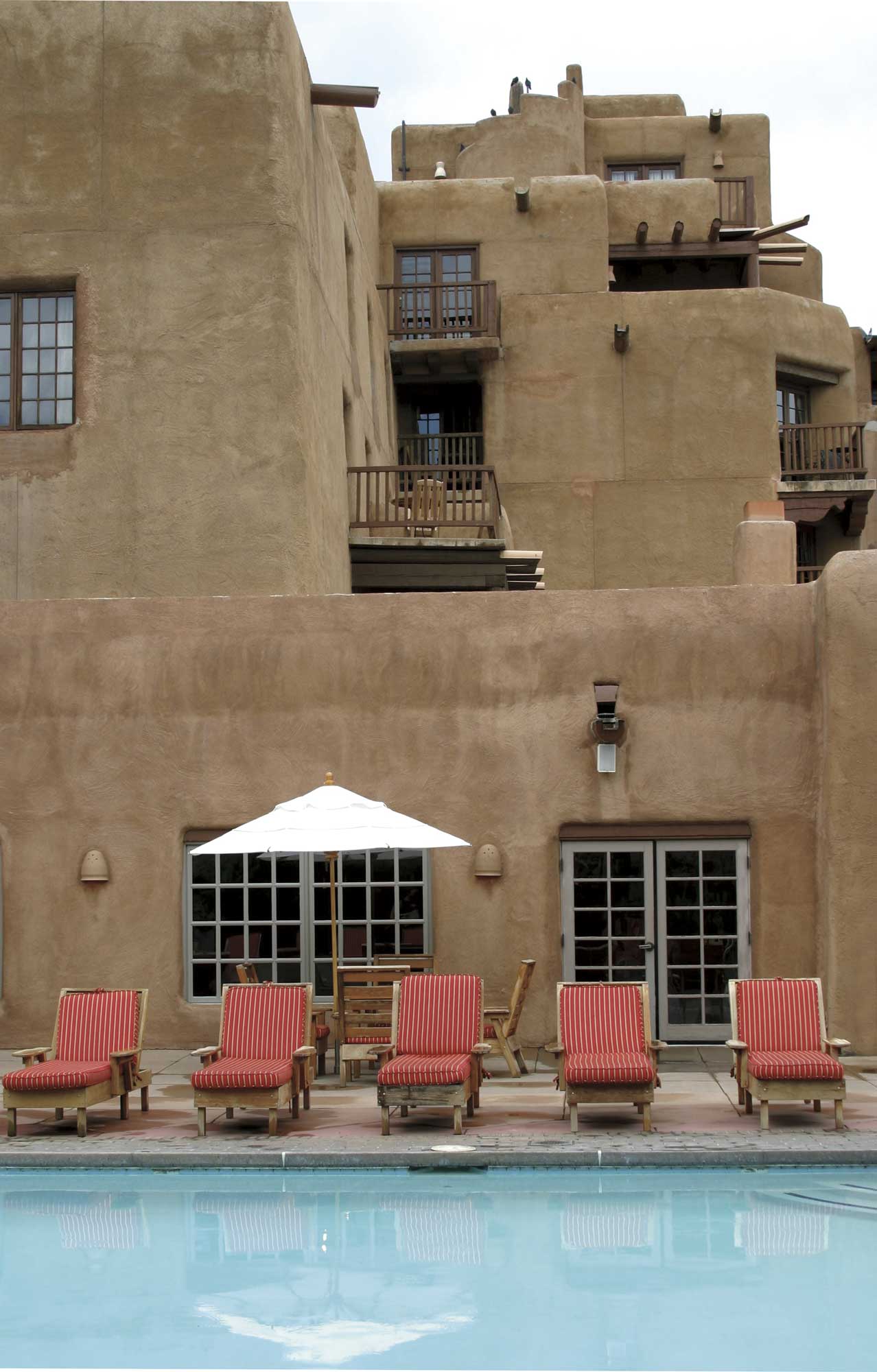 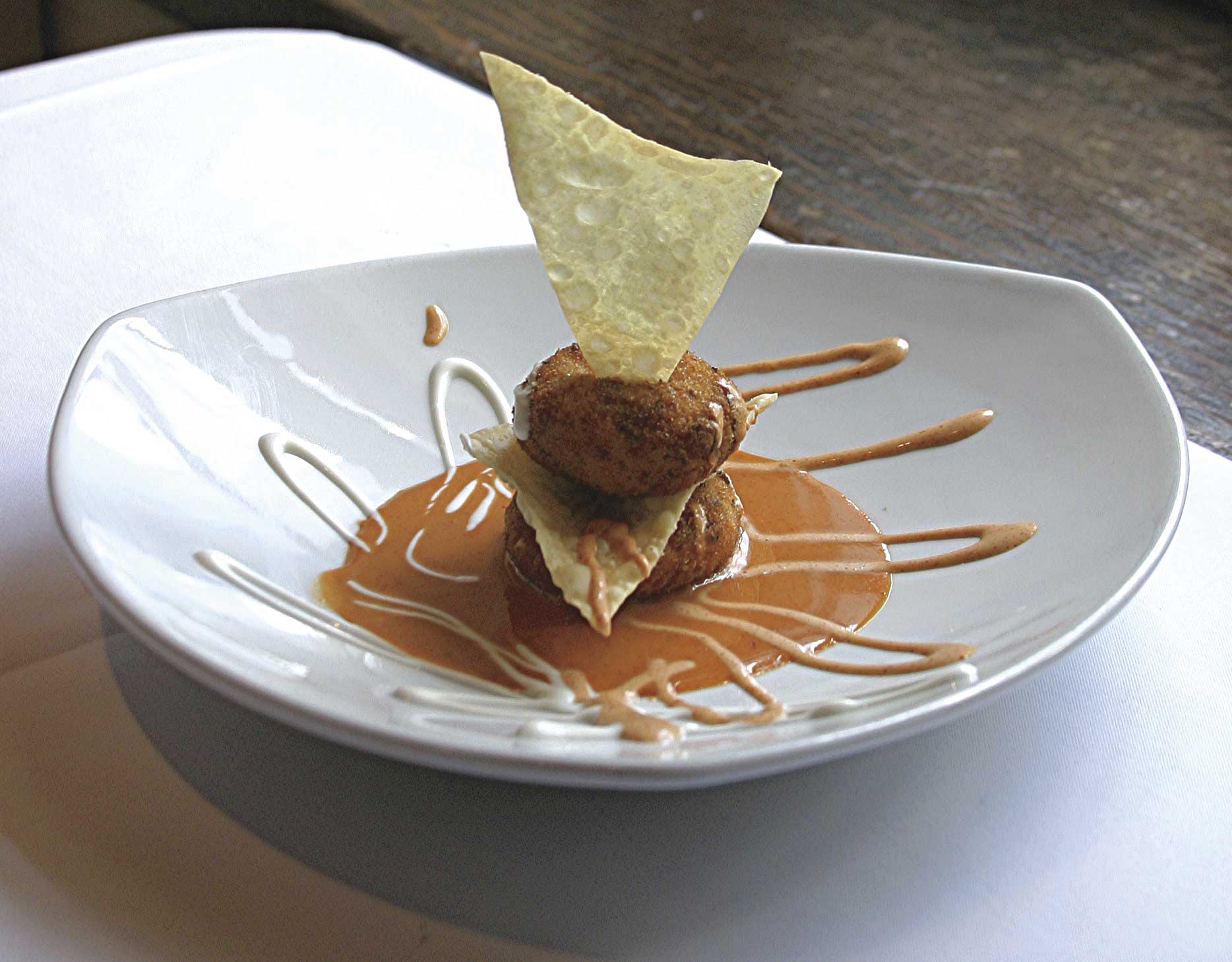 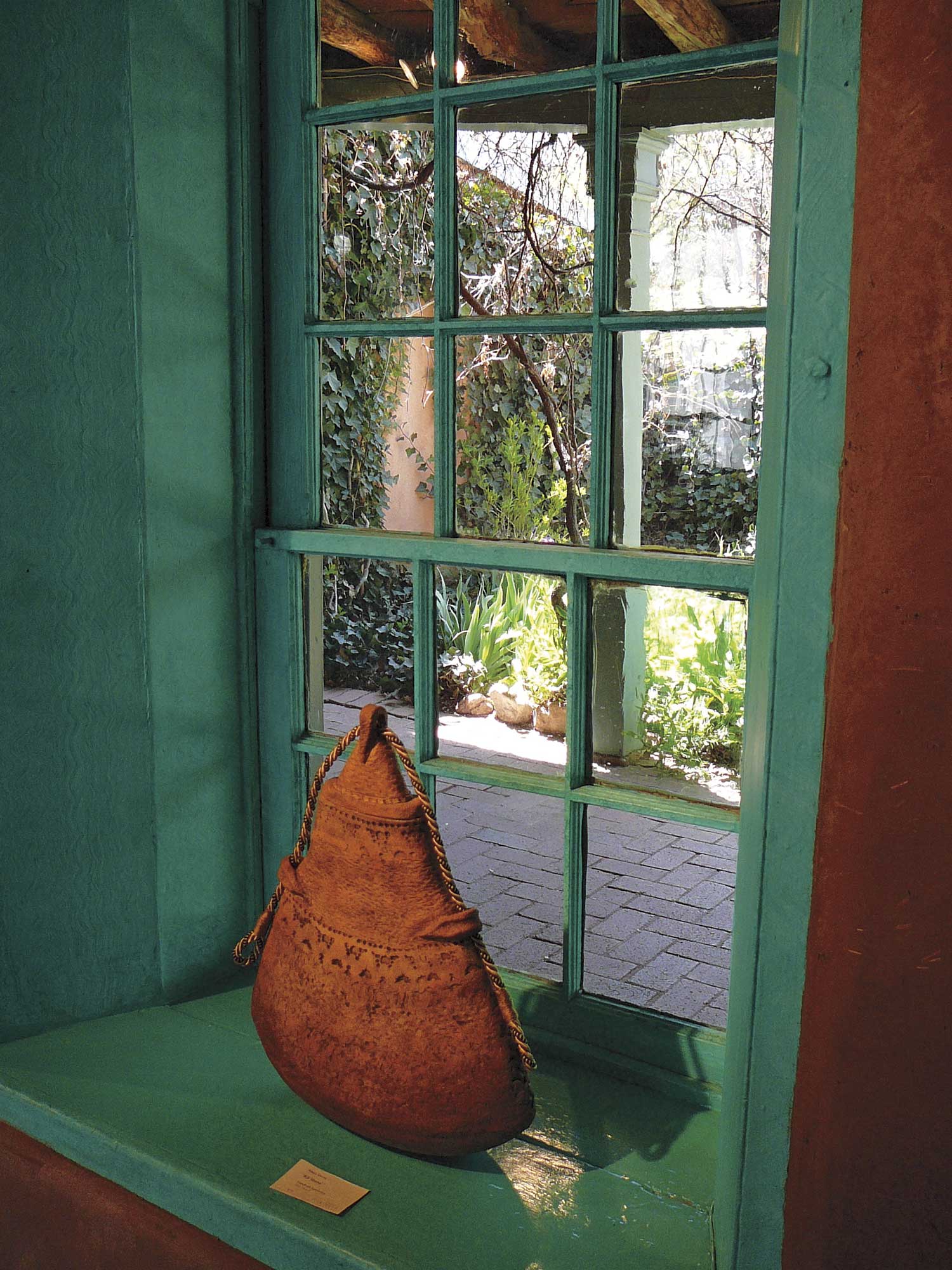 Art is everywhere among the varied galleries along Canyon Road. 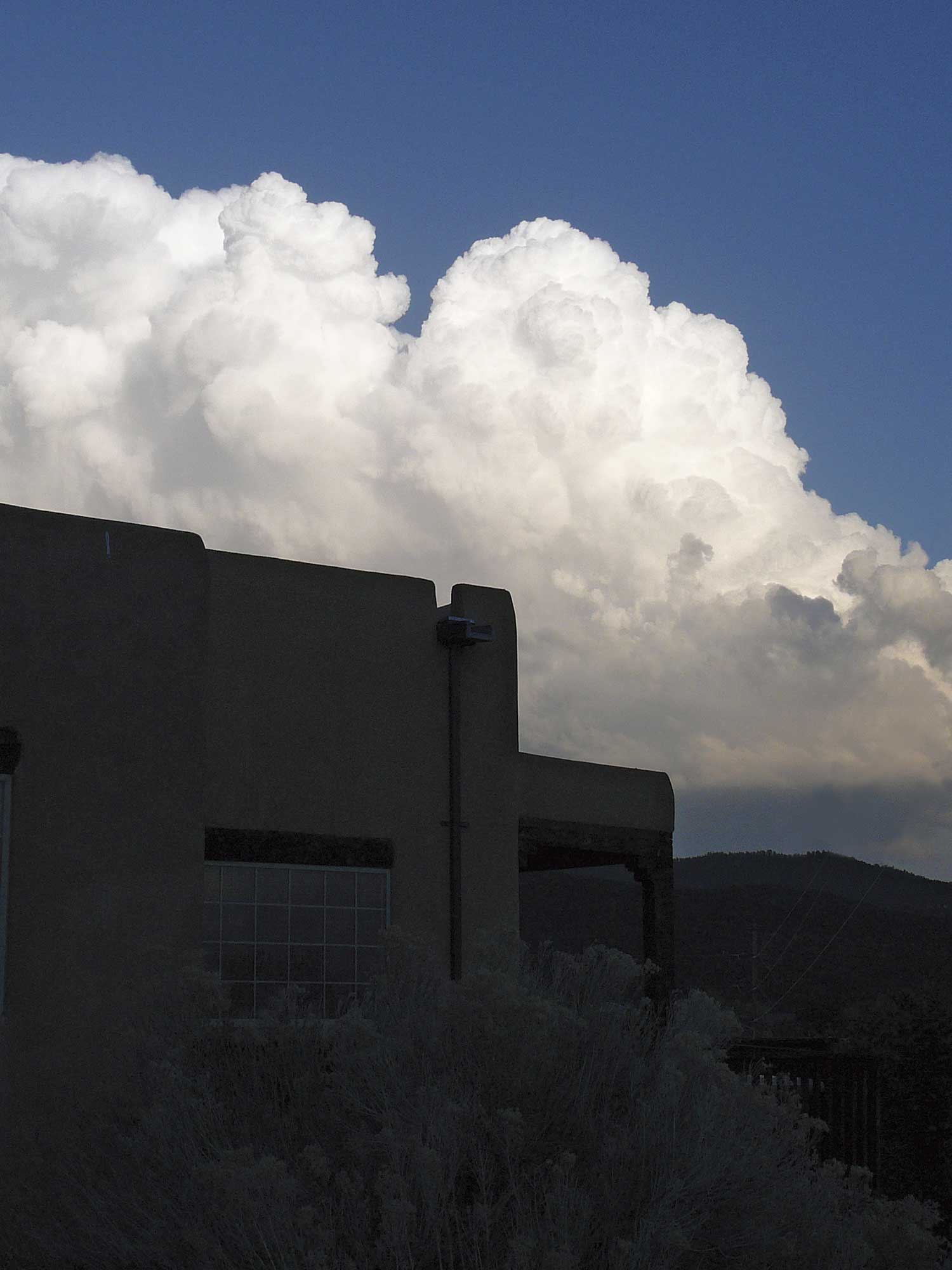 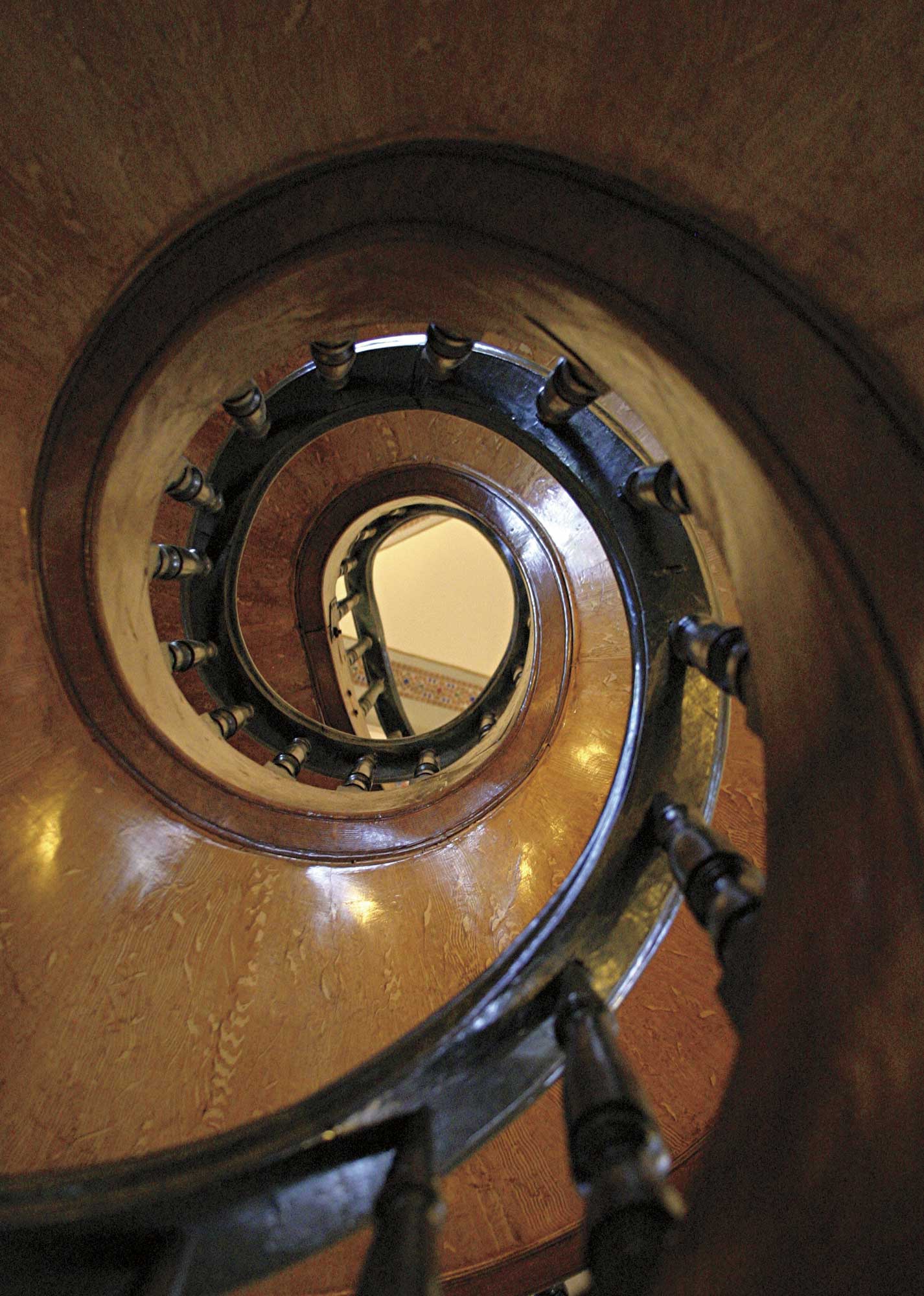 The mysterious spiral staircase of the Loretto Chapel. 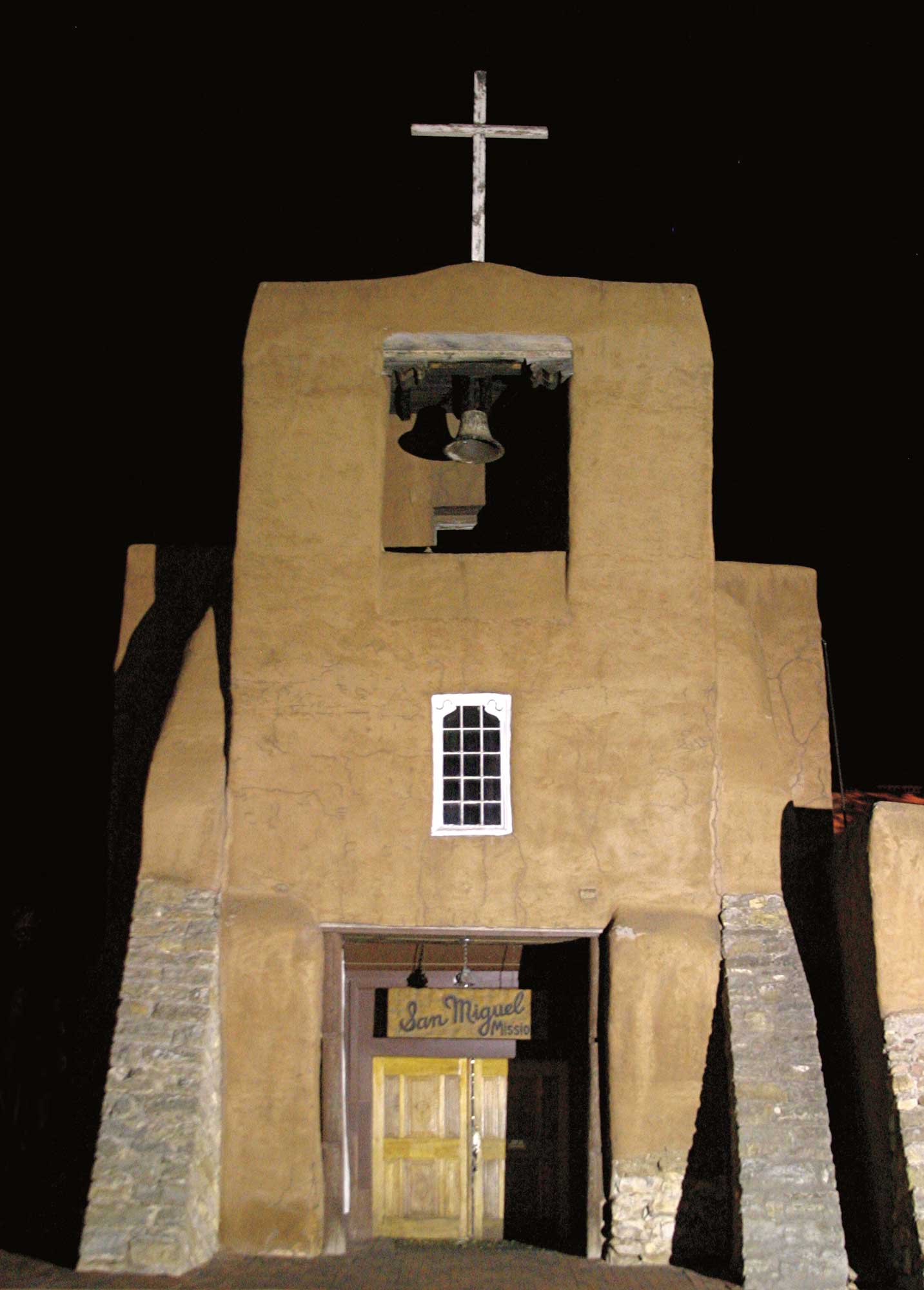 The San Miguel Mission was constructed in 1610 and is said to be the oldest existing church in the United States. 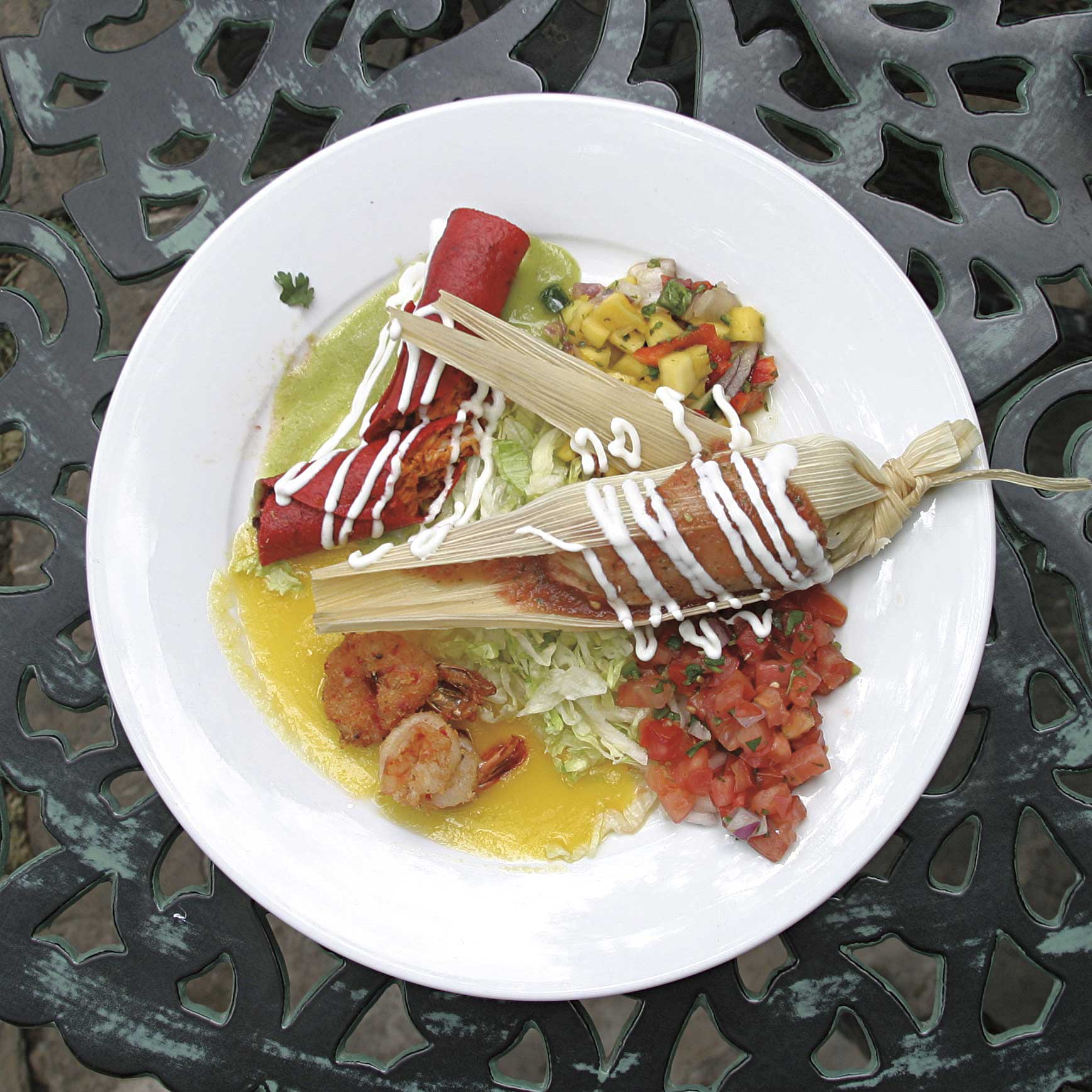 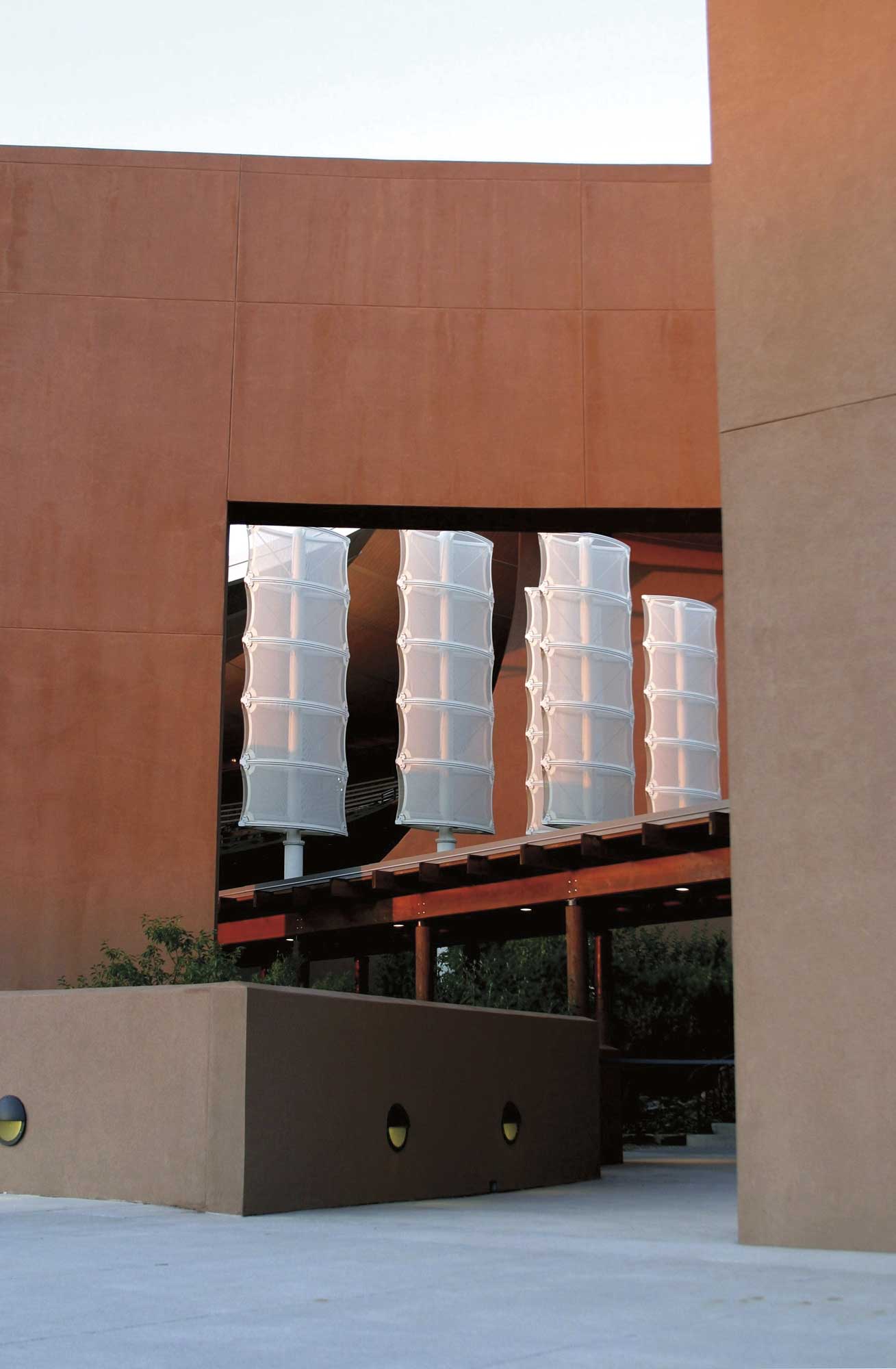 The Stieren Orchestra Hall at the Santa Fe Opera. 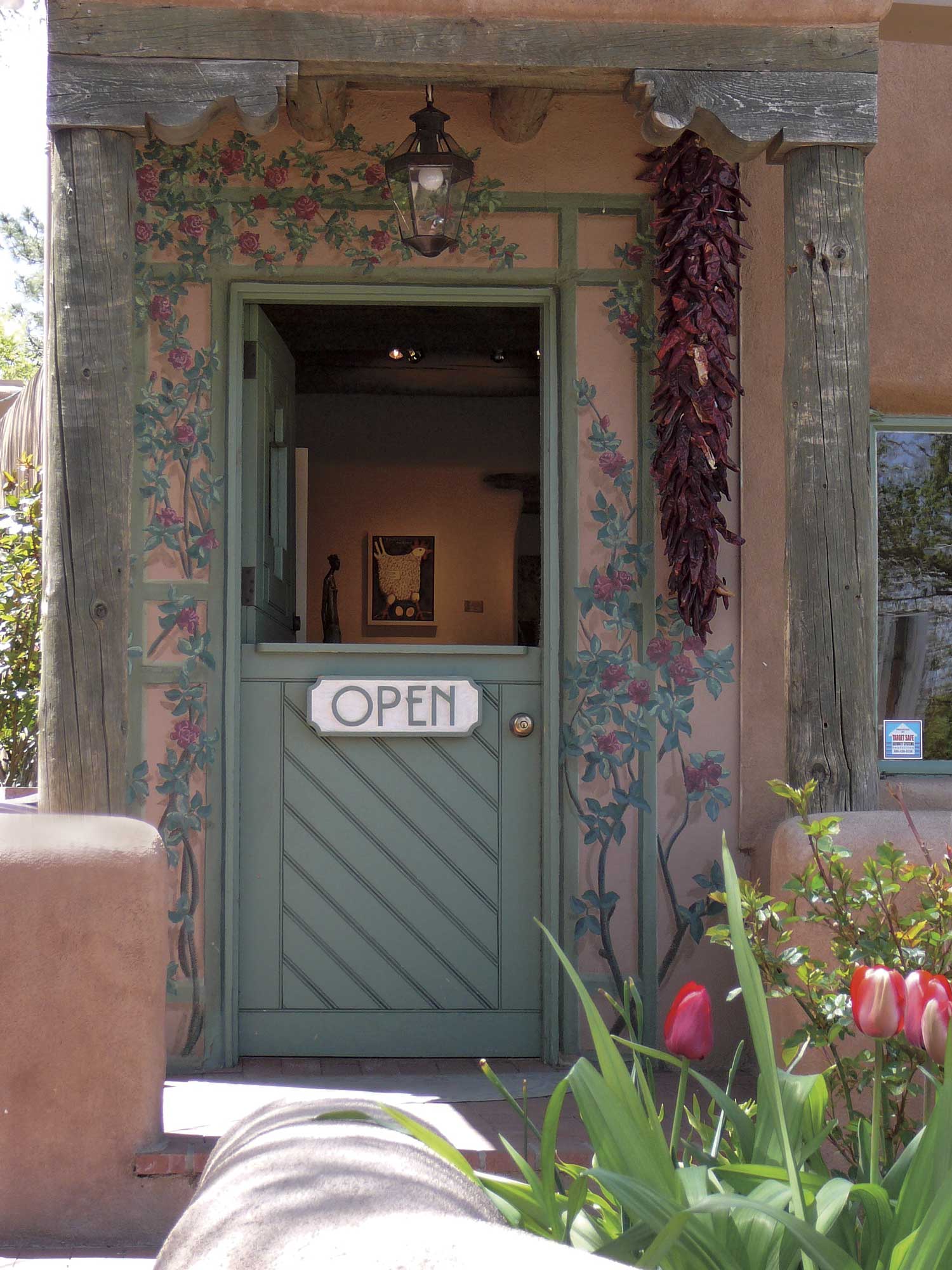 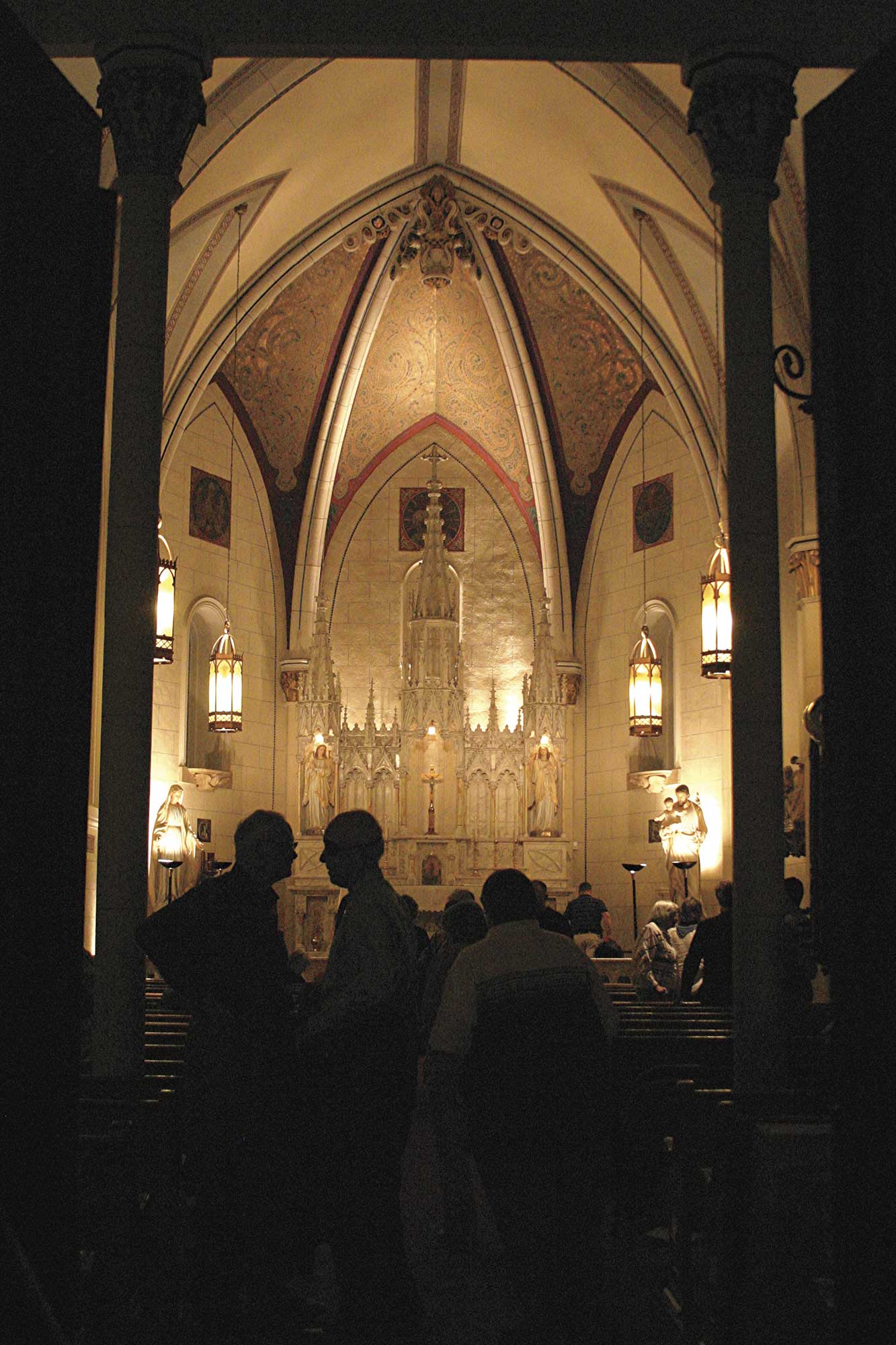 Intermission of the Desert Chorale performance at the Loretto Chapel. 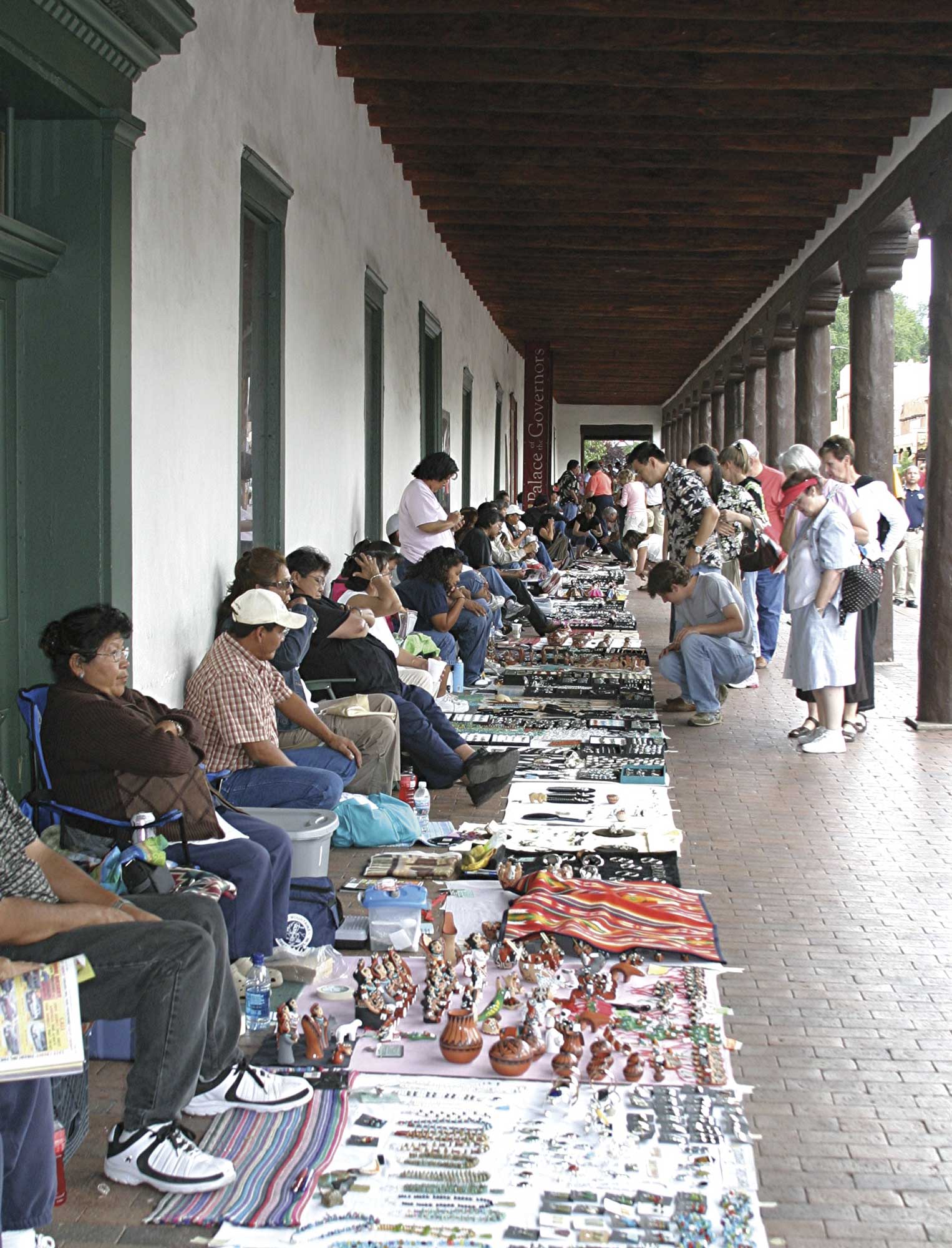 The Portal Program at the Palace of the Governors has allowed artisans with tribal enrollment to sell jewelry and art in front of the Palace since the 1930s. Bartering is unacceptable, but all artisans certify that their products are handmade, the turquoise is regional and the prices are fair. 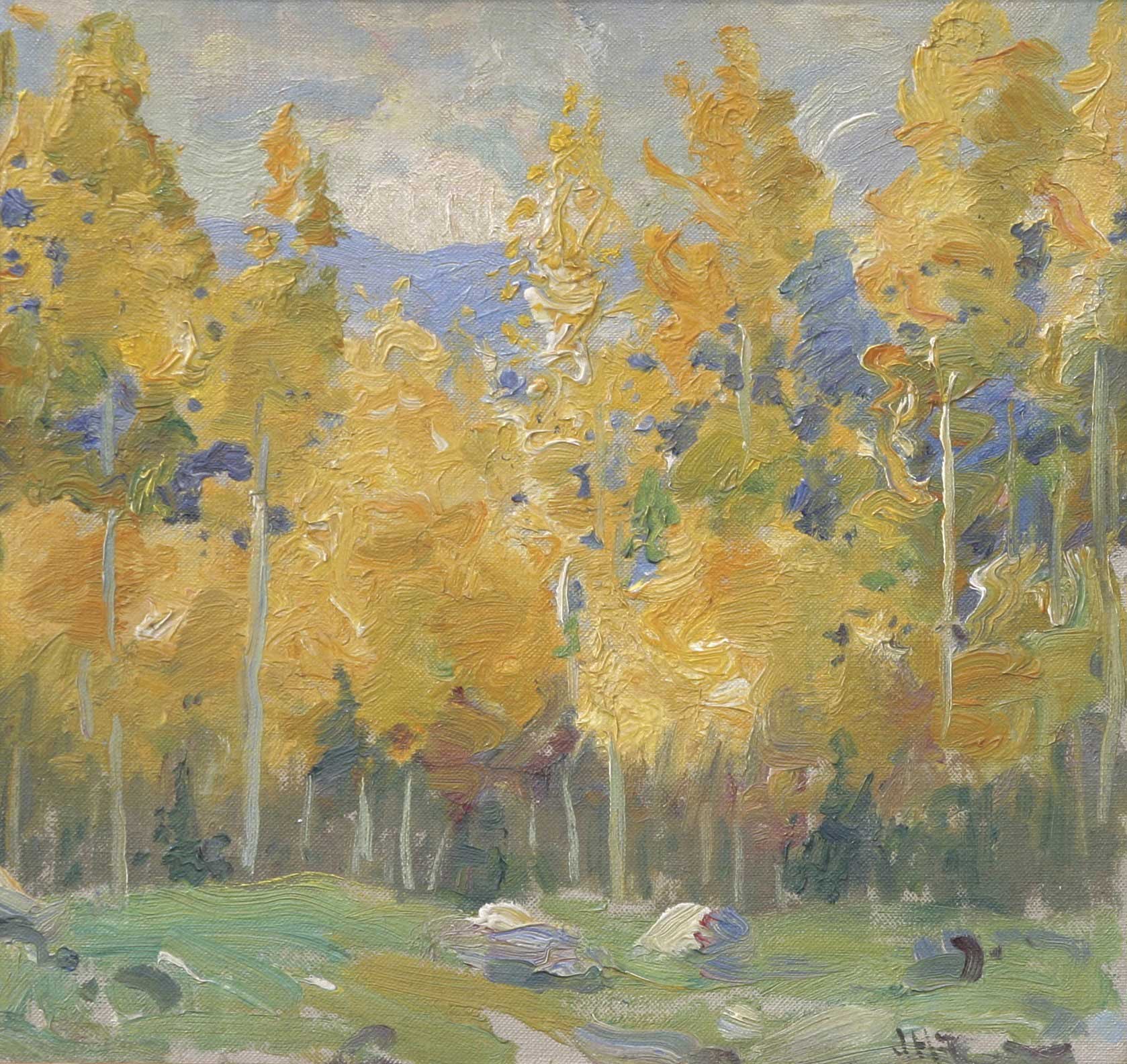