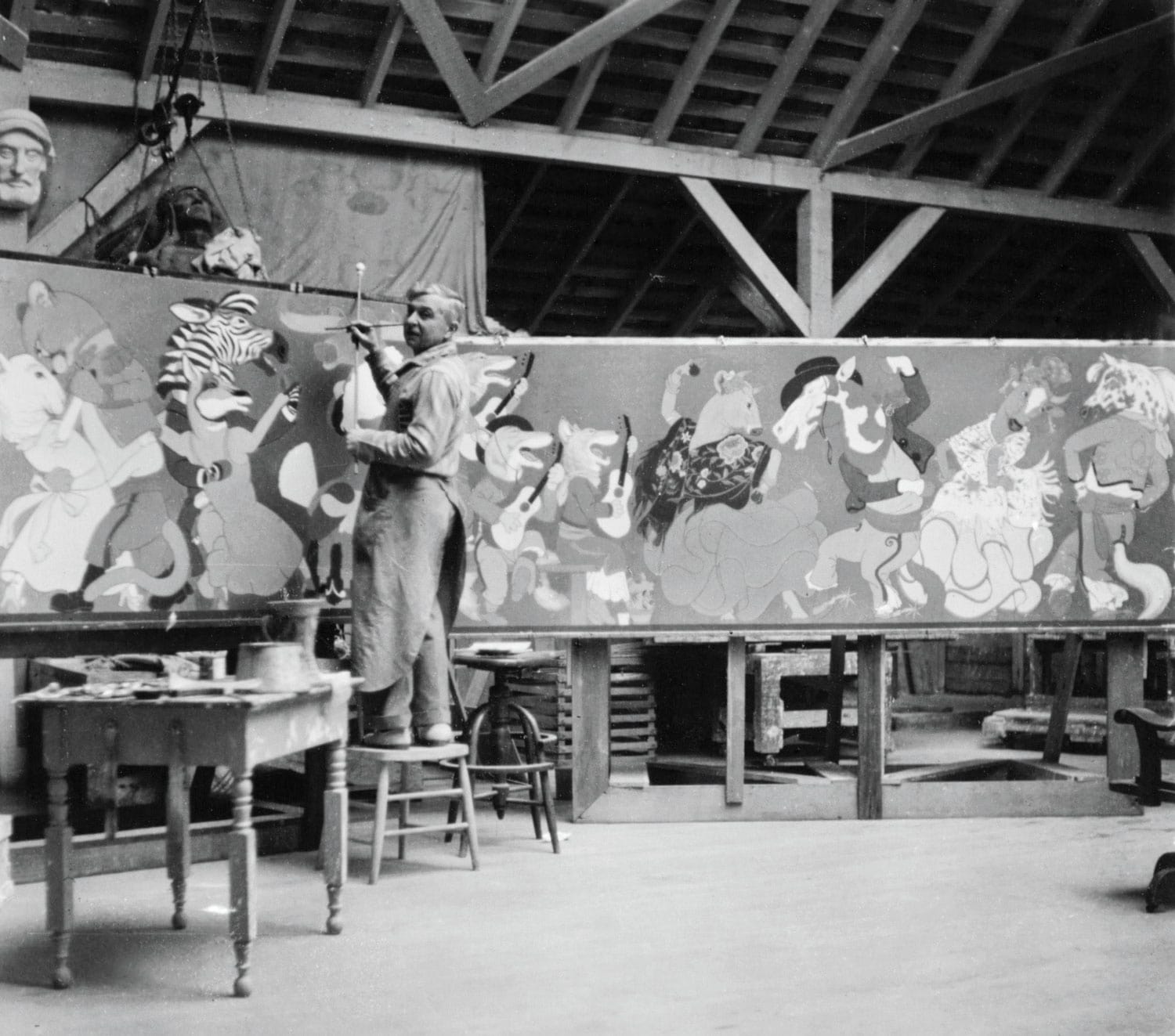 Jo Mora in his studio, at work on one of his murals for the Fable Restaurant in the Hotel Drake-Wiltshire, formerly in San Francisco, in 1936. The murals are now found at the Trotter Galleries in Pacific Grove, California.

He was the scion of distinguished European artists, yet a roughneck who proved himself a cowboy on Texas cattle drives at the turn of the last century. While a young man, he enrolled at the Art Students League in New York City, apprenticing to the Beaux Arts painter William Merritt Chase, yet later, he enjoyed a profitable career as a commercial illustrator. He was a Spanish-American from Uruguay who traveled the California coast, sketching Roman Catholic missions. He was an accomplished horseman who spent years in Arizona, photographing, painting, and living with the Hopi. He was a historian of the American Southwest, yet a man who wrote children’s books and scribbled cartoons his entire life. He was a sculptor of Remington-like bronzes, yet a playful mapmaker whose images of national parks sold widely during the 1930s, and whose art would adorn the cover of “Sweetheart of the Rodeo,” The Byrds’ 1968 album of Country Western ballads. He was Joseph Jacinto “Jo” Mora, widely known as a Renaissance man of the West. 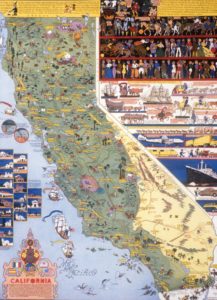 “To him, art was an entirely natural occupation,” Nigel Holmes writes in the book, Pictorial Maps. “Whether it was drawing separated linework for a map, painting a classical portrait in oils, or modeling a cowboy and his horse for a bronze statue.”

Mora was born in Montevideo, Uruguay, in 1876, but his family had immigrated to America by 1880. His paternal ancestors were sculptors in Catalonia, and his father, Domingo Mora, sculpted architectural adornments for buildings as noteworthy as the Metropolitan Opera House in New York City. Also artistically gifted, Mora’s older brother, F. Luis Mora, was a European-style, Post-Impressionist painter, who was elected as the first Hispanic member of the National Academy of Design in 1904. Luis’ portrait of Warren G. Harding hangs in the White House. 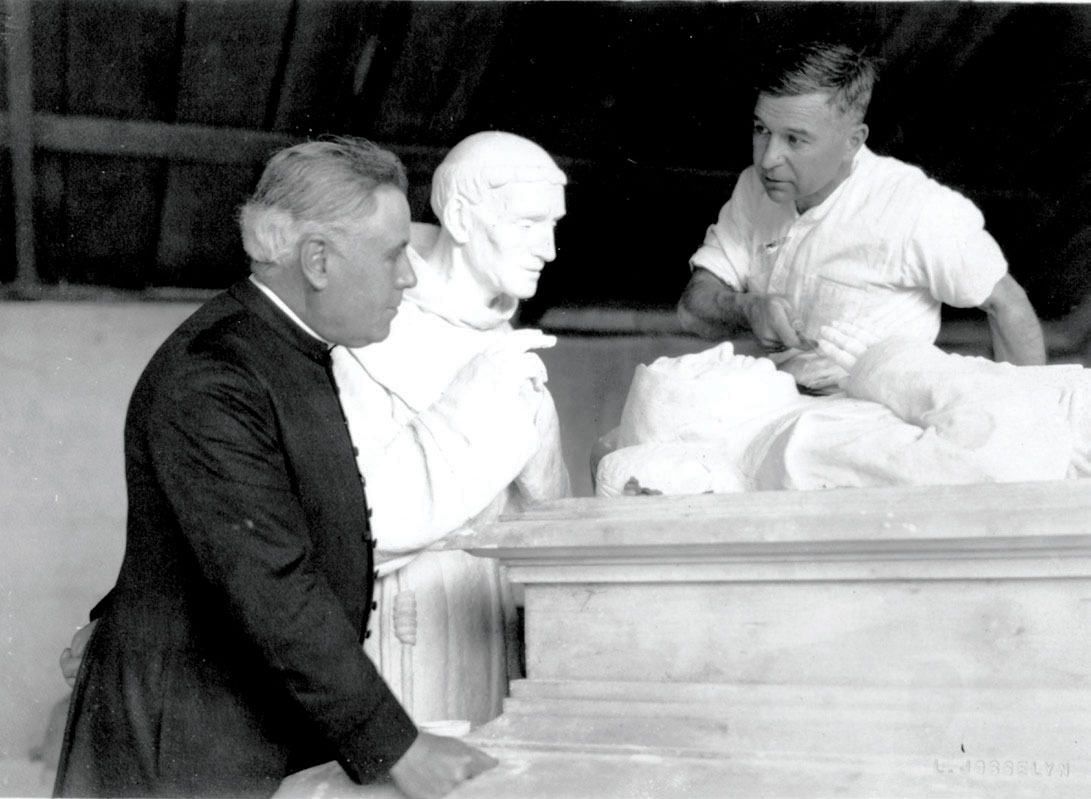 But Jo was of a different stripe. By his early 20s, he was a successful cartoonist for the Boston Herald and an illustrator of children’s books. Unexpectedly, he quit that life in 1903 and decamped from Boston to California. Mora had heard his father’s tales of Uruguayan gauchos growing up, and had seen Buffalo Bill’s Wild West Show in New York City. Horace Greeley’s advice to “Go West, young man,” was in the air, and America’s dime novels and magazines echoed that mandate. His father held a keen interest in Native Americans; Jo had first met them in Mexico, where the Moras had moved to escape prejudice before and during the Spanish-American War. In that period, he worked as a cowhand, driving cattle through Texas and Mexico. 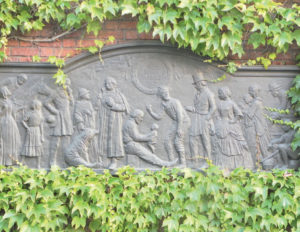 Bret Harte memorial at the Bohemian Club in San Francisco. Courtesy of the Bohemiam Club, photo by Peter Hiller.

According to Stephen Mitchell, in Jo Mora: Renaissance Man of the West, Frederic Remington saw Mora’s work during the mid-1890s in Texas and told him, “Just keep doin’ what you’re doin’, son, you’re doin’ just fine.”

But by 1904, fascinated by the Hopis’ religious rituals and ways, Mora set out from California to join them. He would spend three years in their desert outpost in Northeastern Arizona, sketching their colorful katsina costumes and photographing their Snake, Buffalo, and other dances.

Mitchell calls these years, from 1904 to 1906, “the most creative in Mora’s professional career.” The portable Kodak camera was new, and Mora took full advantage of its mobility. The photographs he took were mesmerizing, and a retrospective of them appeared at the Smithsonian Institution in 1979. As Tyrone H. Stewart wrote in that exhibition catalog, his photographs and paintings “should eventually be recognized as one of the greatest visual contributions a non-Indian has produced on the Hopi culture.” 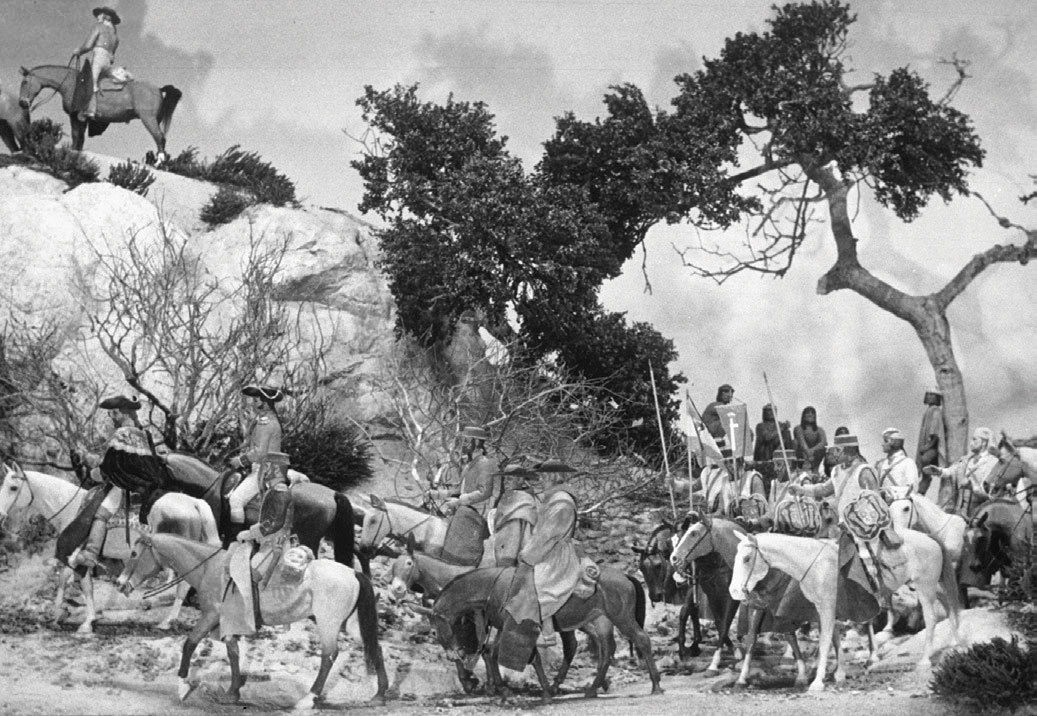 Detail of the Portola diorama. Photo from the Jo Mora Family Trust.

Mora was accepted by the Hopi so completely that he was welcomed into the tribe, undergoing an initiation ceremony that included flogging. “I received the Tunwap Flogging on my bare arms, thighs, and back,” he wrote in his journal. He was given the Hopi name, Nalje. 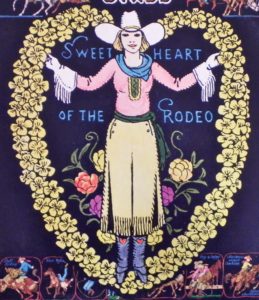 Detail of The Byrds album cover art by Jo Mora.

Mora returned to California and married Grace Alma Needham in 1907. The couple lived for a time in Los Angeles’ Ocean Park, then retreated to the northern coast, where Jo set up a studio in Mountain View.

After the death of his father in 1911, Mora became riveted by sculpture — as if wishing to extend his family’s legacy. As Mitchell writes, “The Mora sculptors were well-known throughout Europe, dating back to José Mora in the 16th century.”

“Domingo was as important a teacher to Jo as anyone else,” says Peter Hiller, curator of the Jo Mora Trust Collection and author of the forthcoming biography, The Life and Time of Jo Mora: Iconic Artist of the American West. “Domingo was a classically trained sculptor,” Hiller says. During this period, Mora would sculpt a number of cowboy-themed bronzes and bas-relief memorials, including the Bret Harte Memorial at the Bohemian Club in San Francisco. He created relief panels and vast, multi-figured dioramas, such as The Discovery of the San Francisco Bay by Portola for the 1939 and 1940 Golden Gate International Exposition. With 64 sculptures of humans and more than 200 animals, the diorama won best of show at the event. He later made a comparable diorama for the Will Rogers Memorial Museum, in Claremore, Oklahoma. 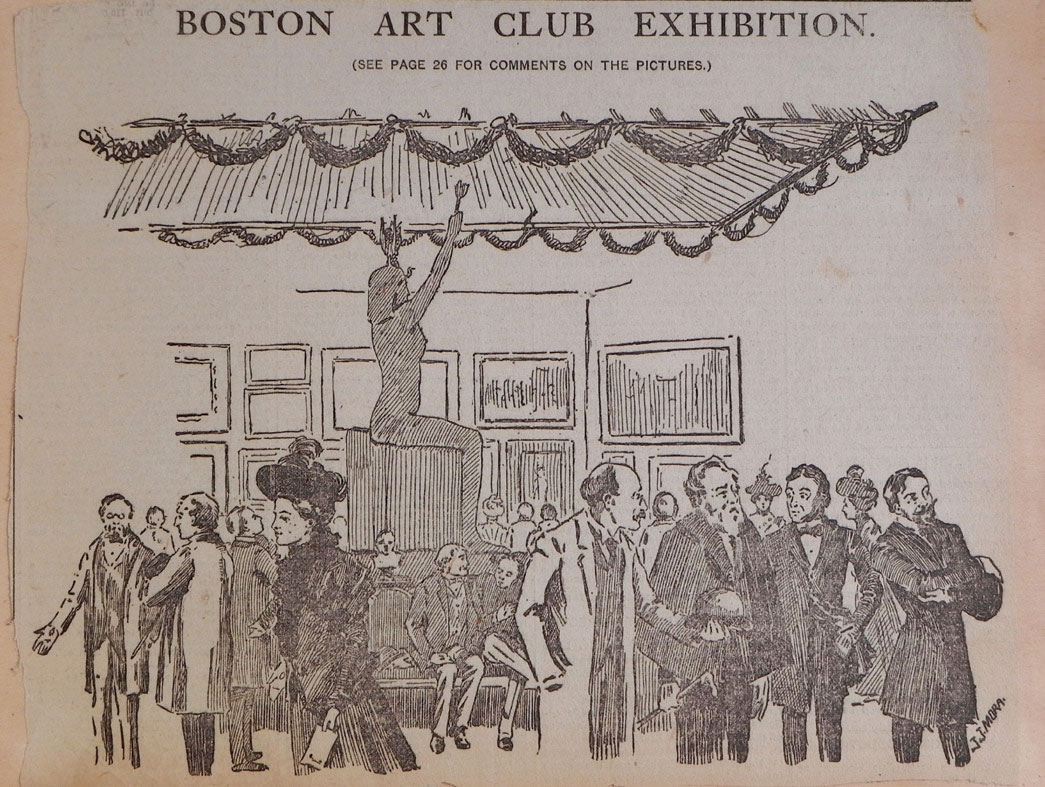 But a strikingly impressive piece, perhaps his best, had already been carved in Carmel-by-the-Sea at the Mission San Carlos Borromeo in 1922. It was a cenotaph of Father Juniperó Serra. “He considered this his most important work,” Hiller says. Fashioned from bronze and travertine, it shows three priests praying over the body of Father Serra, which lies on a marble base; the stone materially suggests the cliffs and coastal bluffs nearby. The arrangement is classical, but the mood is California-Spanish. In a photograph taken at the cenotaph’s completion, Mora poses in a short jacket, wide sash, and snug trousers, like a Spanish grandee. 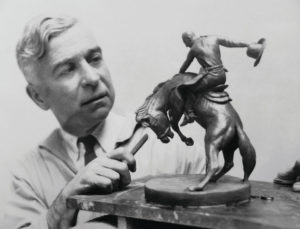 Mora at work on a trophy for the Salinas Rodeo.

The cenotaph is also indicative of what may have been Mora’s considerable interest in spirituality, as
suggested by his work with the Hopi and his early travels along California’s Mission Trail from Santa Ines to Ensenada, Mexico. But history was of even greater interest, writes Hiller, noting that primarily he saw the missions as historic buildings. In his journals, Mora mentioned their striking appearance. On June 26, 1903, he wrote of San Juan Capistrano, “I wandered around and walked up to [the] mission. A beautiful old spot, with its refreshing garden, and picturesque arches … The sun had set, the colors had slowly faded out of things, and as I stood there in the twilight by the ruins of the once imposing structures … I could not help but imagine myself back in the old mission days.” 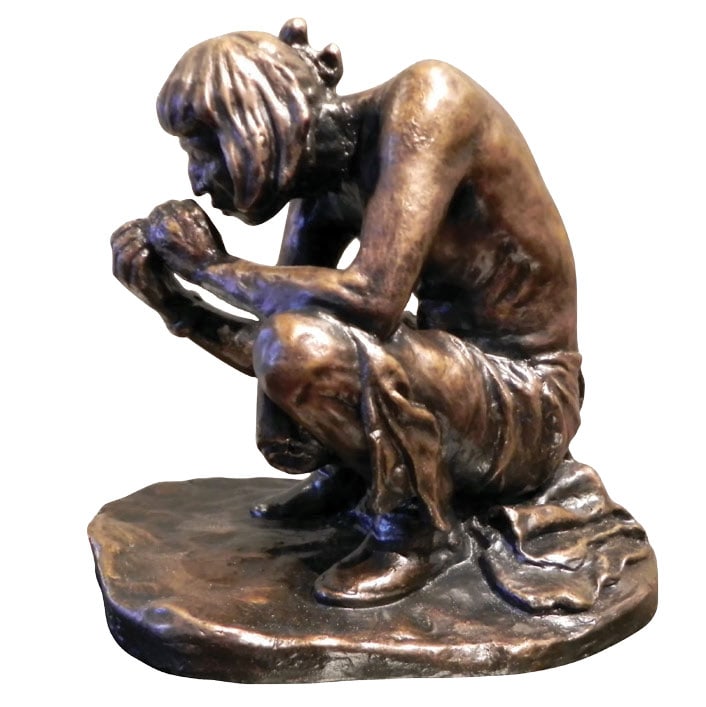 Mora’s love of history was further expressed not only in the two books he wrote about cowboy life, Trail Dust and Saddle Leather and Californios, but in the extraordinary poster-like maps he created during the Depression. They were illustrative, compositionally daring, and resembled Egyptian friezes in their pictorial format. These “cartes” portrayed subjects such as the history of the American Indian and life around Carmel-by-the-Sea, Yellowstone, Yosemite, the Grand Canyon, the Monterey Peninsula, and other locations. The most famous poster, drawn in 1933, was titled The Evolution of the Cowboy. It combined detailed illustrations of rodeo life and cowboy history, from the Spanish era to the 20th century. 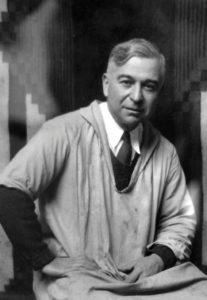 Portrait of the artist c. 1945, photo from the Jo Mora Family Archive

Mora considered himself very much an artist, but also a horseman, a vaquero. He’d learned horsemanship on the vast Donohue Ranch near Solvang, California, and his knowledge of cattle drives, branding, roping, saddles, bits, and the minutiae of cowboy life — which he demonstrates in his books — is unparalleled. As Mike Beck and Ian Tyson wrote in their song, “Old California:” Jo Mora told the story / all the color and the glory / And the Californios who rode / through dapple green and gold/ Aye yi yi aye/ In old California.

Mora is recognized for his love of that state. The largest publicly available collection of his art belongs to the Monterey History and Art Association. The Monterey Museum of Art mounted a retrospective of his work in 1998. In 2018, The Byrds performed their “Sweetheart of the Rodeo” 50th anniversary tour, for which Mora designed the album cover. Mora’s artwork was prominently displayed and seemed to speak both of his affection for the American West and of his dedication to popular, less-stylized arts. As Mora wrote in his preface to Trail Dust, “In presenting this book to the public, I assure you I had no high ambitions of the belles-lettres brand as my incentive.” 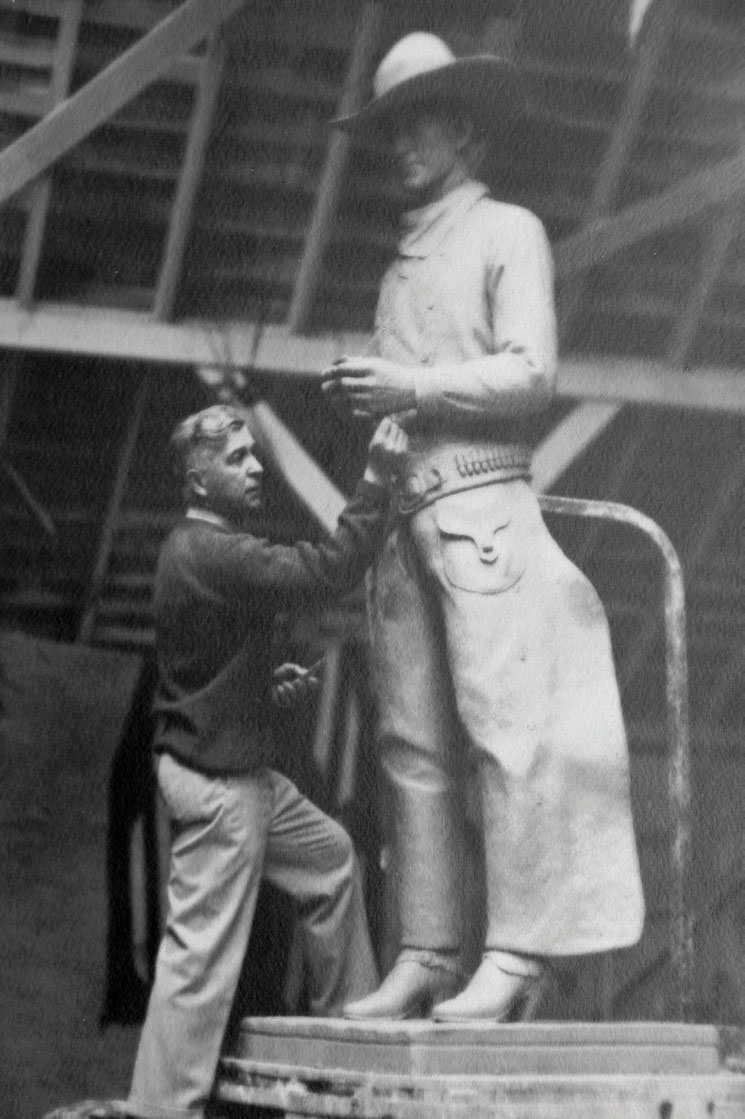 Mora at work on a heroic bronze, The Cowboy, now residing at the Woolaroc Museum in Oklahoma.

Mora died on October 10, 1947, ever the cowboy. As he’d noted in Trail Dust’s preface: “I still have a long hitching rail under the pines within 50 feet of our garage entrance … I pray that good old Gabe, when he takes down his saxophone or whatever it is he uses these days, to give me the clarion call for that last inspection, [that he] will let me ease into the saddle with my boots on and jog to that rendezvous.”