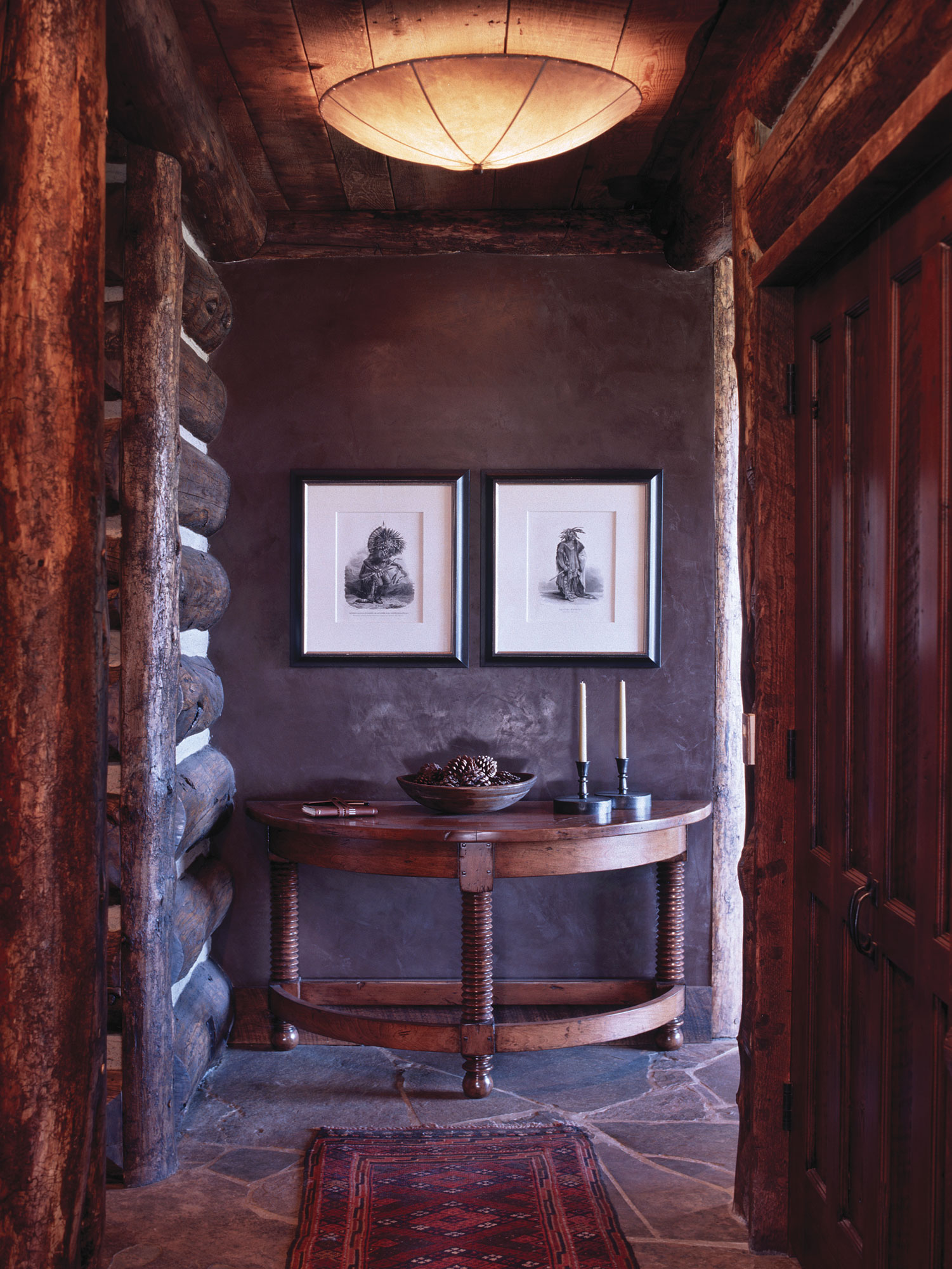 In contrast to the rustic front entry, the hallway segues to a sophisticated vignette that displays two unusual Karl Bodmer etchings.

RISING OUT OF THE UNDULATING PRAIRIE, South Dakota’s Black Hills are a shock of highland forest in a vast sea of grass. Likewise, the gabled roof of a family cabin, nestled into the thick ponderosa pines and Black Hills spruce, stands on a hill overlooking these rolling uplands. Humble and homey, it looks as if it has been here since the days when Lieutenant Colonel George Armstrong Custer’s fact-finding expedition surveyed this country in 1874.

“My first impression of this property was that it was a perfect location for camp,” said architect Candace Tillotson Miller, principal of Miller Architects in Livingston, Montana.

Drawing on the remote features of this former ranchland, Miller tapped influences from classic structures of the American West, utilizing old standing-dead logs from lodgepole and fir and incorporating stone accents. Miller called upon the expertise of Bozeman, Montana’s Yellowstone Traditions as the contractor. An old Boy Scout camp just down the road lent credence to the campsite concept, as did the vivid backdrop of Custer’s exploration here, and before him, the findings of Lewis and Clark as they explored the area in the autumn of 1804.

Sited as a traditional homestead might have been — sheltered from wind and wayward travelers- — a covered porch is angled south, to take advantage of passive solar benefits throughout the day. A century ago this light-catch was pragmatic, today — with the luxury of electricity and radiant heat — it’s no longer a necessity, but a bonus that brings the outdoors in and provides sweeping vistas from the main living spaces in the home.

A gateway to the West, the Black Hills are a precursor to the great Rocky Mountain Range and the Continental Divide, a prominent landmark that is home to Native American sacred ceremonial sites, Mount Rushmore and the Crazy Horse Memorial.

With the Custer expedition, the gold rush soon followed and the railroad quickly after that — all apt markers of the area’s recent history — but for the Lakota tribes, the Black Hills, or Paha Sapa, is the origin of the world and the source for all of their creationist stories.

With this knowledge of recent and ancient history, the owners set out to honor the region’s foundation — first in building a cabin that mirrors the classic Western camps of the 19th century, built of available materials, in a practical manner and without flourish; and second, in the artwork displayed throughout their home.

“We wanted a true Western home in western South Dakota that would feel authentic,” explained the owner. “We wanted it to fade into the landscape and have an intimate connection with it.”

Upon entering the cabin, just past the wrought-iron coat hooks, boot bench and shelf of cowboy hats, in the hallway that leads to the open kitchen and living area, a pair of dramatic Karl Bodmer etchings hang over a half-moon shaped, turned-leg table. According to art dealer Jim Brown, of Old Main Gallery in Bozeman, the 1850s black and white #41 and #43 etchings depict western Native American figures in traditional regalia and were an unusual lot printed on high-quality cotton fiber paper. He remarked that the etchings were little known and, in the classic style of European-trained artists, represented highly anglicized physical characteristics typical to Bodmer’s era.

“One of the things we tried to do with this project is to give the cabin a look that is timeless, but the owner didn’t want it to look like a museum. So our goal was to give the cabin a look of things being collected over the last century — art, antiques and contemporary pieces,” said designer Debra Shull, who worked with Phoebe McEldowney as a team for Design Associates of Bozeman; the pair are now partners in their own firm, Haven Interior Design, also in Bozeman.

Turning into the cozy kitchen, the house is centered on an open floor plan that connects to the dining room and adjacent family room. The owners use the home mostly in the summer, welcoming a flood of guests and family members throughout the season. To that effect, Miller Architects crafted living space that would ebb and flow from inside to outside with ease. Three bedrooms and a modest 4,017 square feet of living space allow the house to expand appropriately as the number of guests come and go. The outdoor living spaces make up for square footage. Just off the kitchen a corner porch catches long sunset views, while the central screened and covered porch allows for warm southern exposure during shared meals; and the radial porch takes advantage of sunlight from the summer solstice to the winter solstice, according to the owner.

Surrounded by National Forest Service land, the home was built at 6,500 feet and overlooks a cliff formation that is a classic geological feature of the Black Hills. Back inside, the homeowner’s art collection mirrors the subtle beauty of the landscape. Adorning the kitchen’s pantry is a handpainted image of the 80-acre property by Montana artist Jennifer Bessen. In the living room, above the central stone fireplace, a contemporary oil landscape by Jim Urbaska brings muted tones to the interior, where Shull and McEldowney selected a natural palette of washed greens, tan and grey, accented with red. To the right of the fireplace hangs an antique territory map of the Black Hills, produced after Custer’s expedition. The owners’ property is detailed on the creased and age-marked map, many of the creek, drainage and mountain names remain the same more than 100 years later. The home’s timeless effect resonates with its owners as a family legacy brought on by reverence for the past.

WA&A editor Seabring Davis is at work on a book about Montana cabins, to be published in 2008 by Globe-Pequot Press. 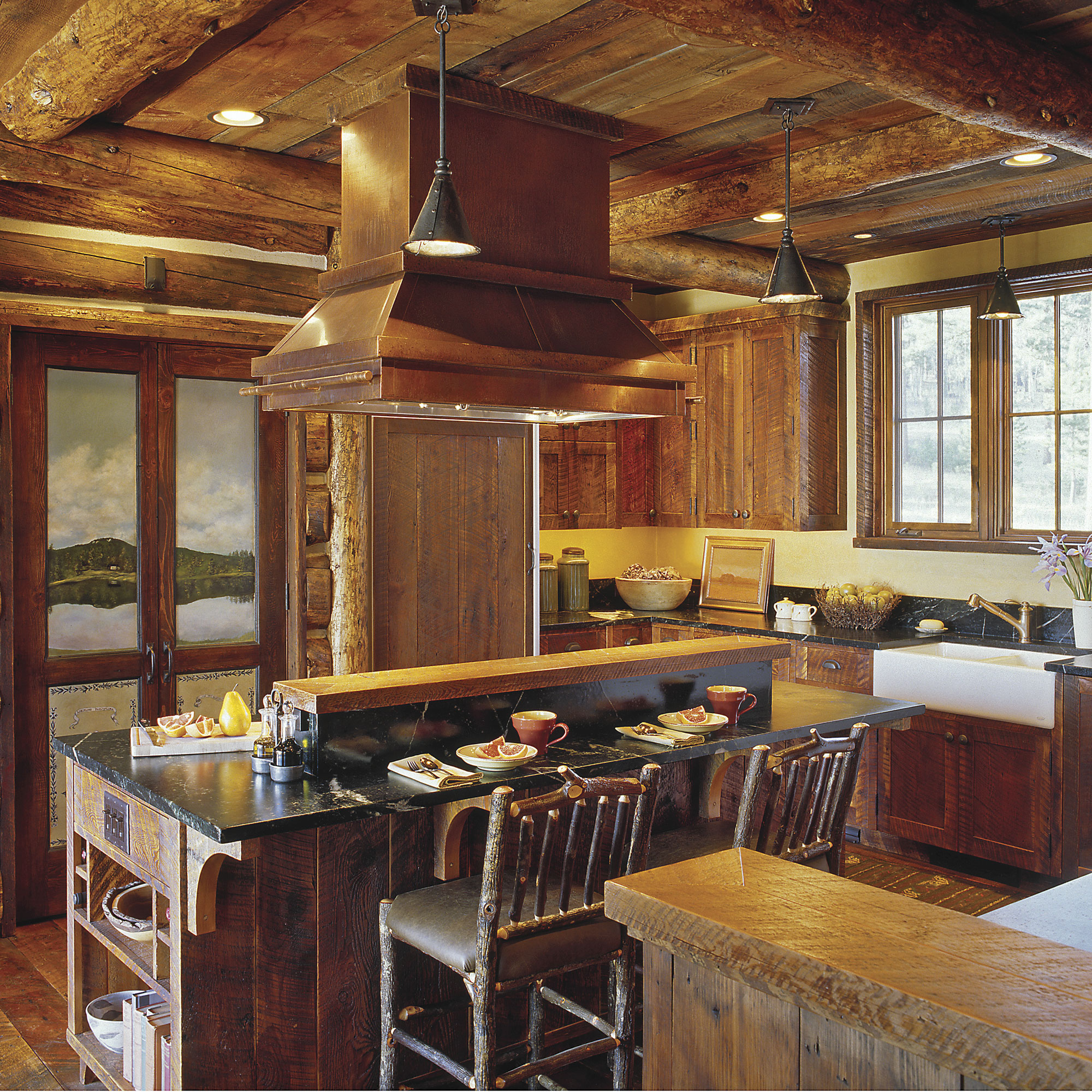 In the kitchen the pantry was personalized with a hand painted mural of the property by Jennifer Bessen.

Tucked into the trees, Miller Architects crafted a low profile, low-impact retreat for the owners. 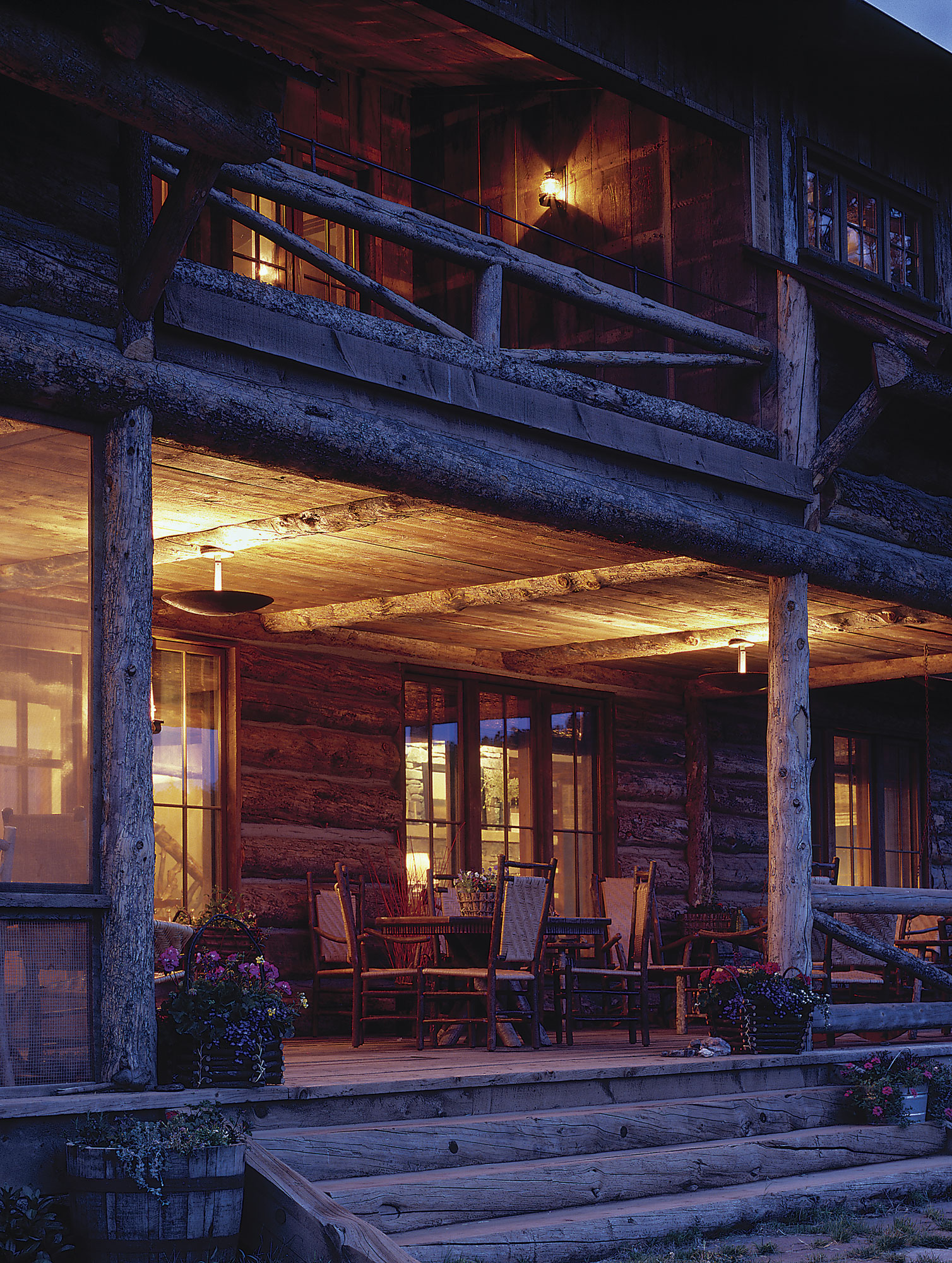 The sheltering comfort of the back porch draws people outside where almost any time of day the views are dramatic. 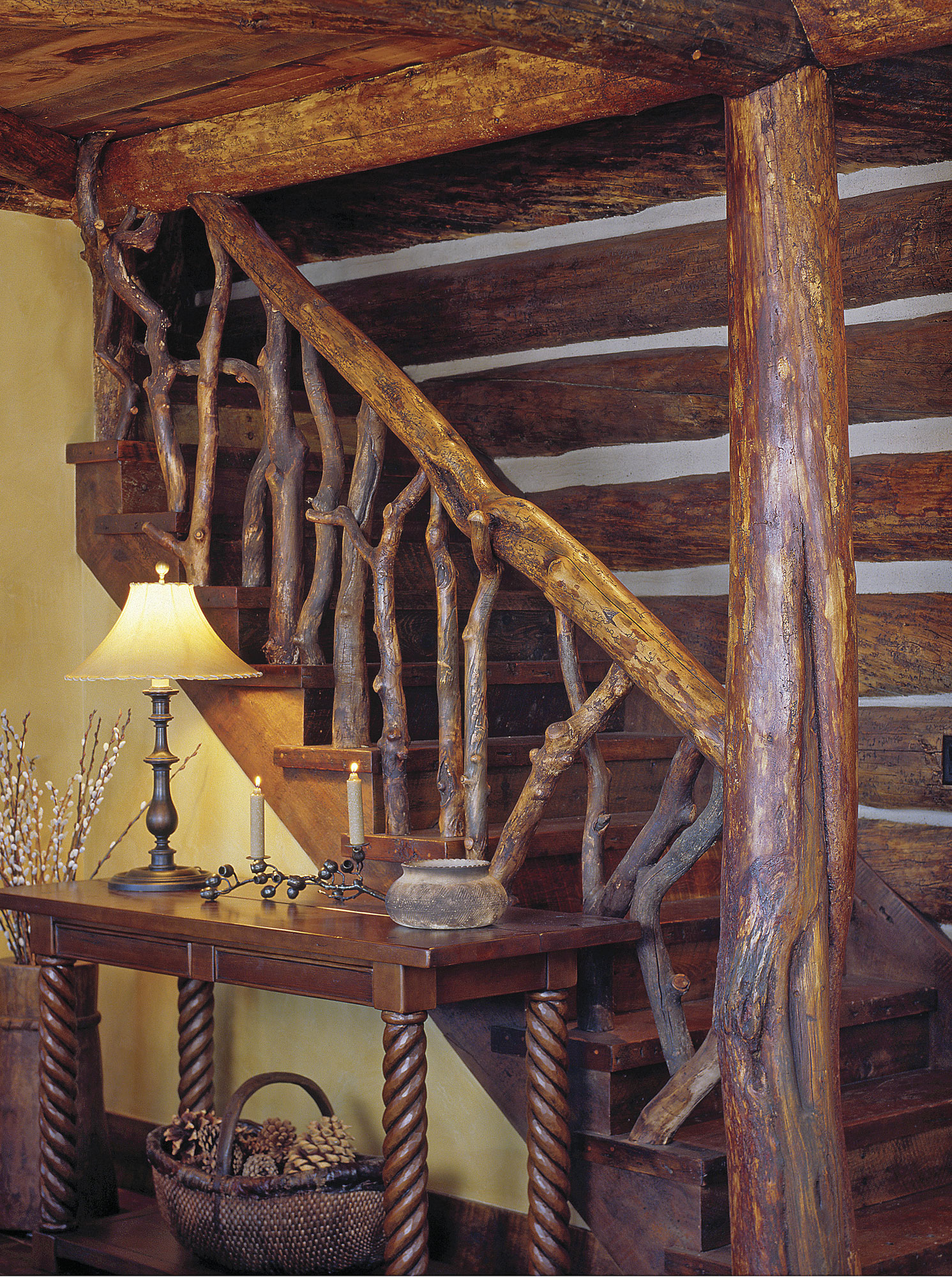 A turned-leg sideboard table in the dining room elegantly contrasts the rustic branchwork on the railing of the stairs. 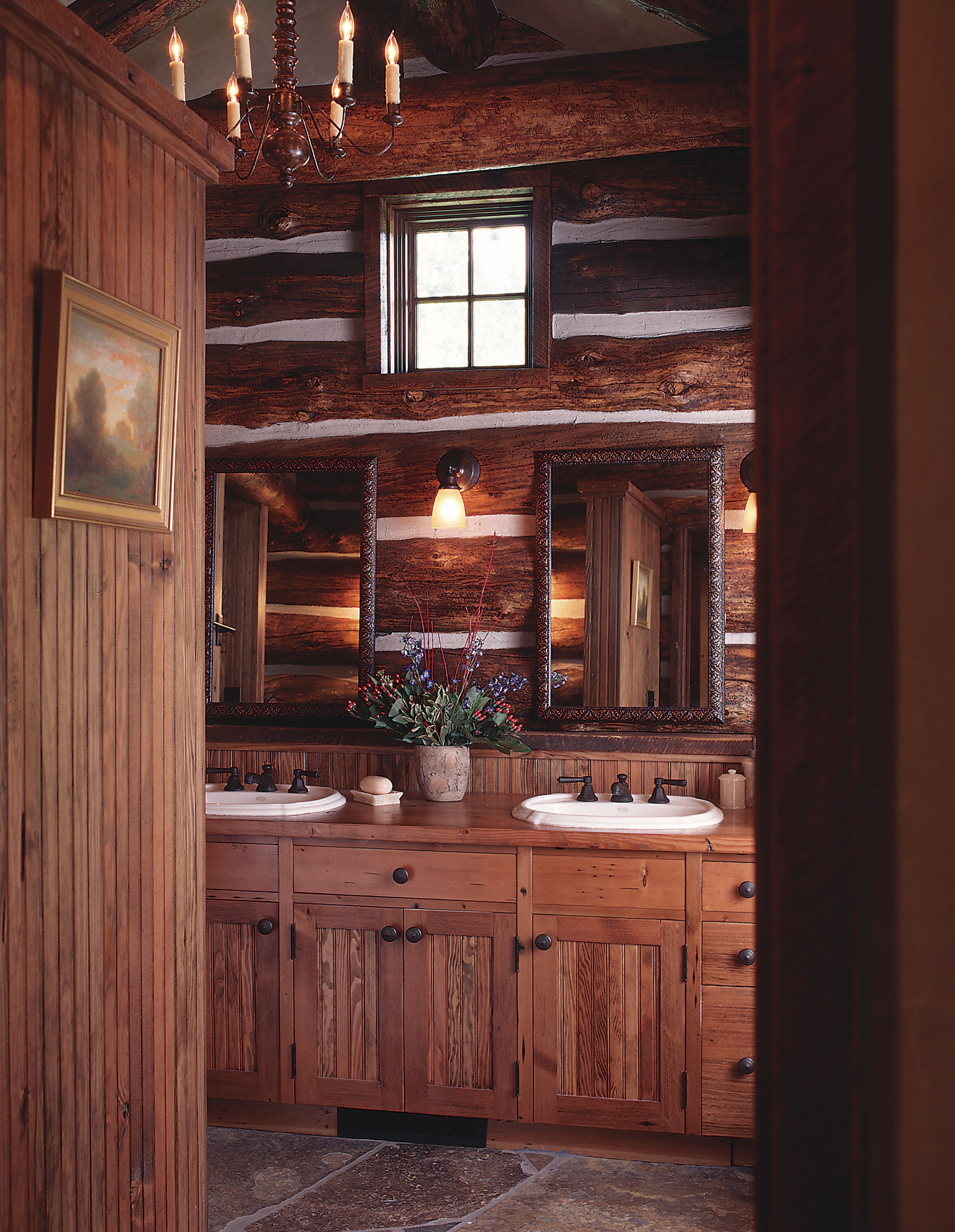 Even in the bathroom, the woodsy cabin motif continues with a dash of sophistication from an impressionist landscape painting that hangs from the beadboard wall. 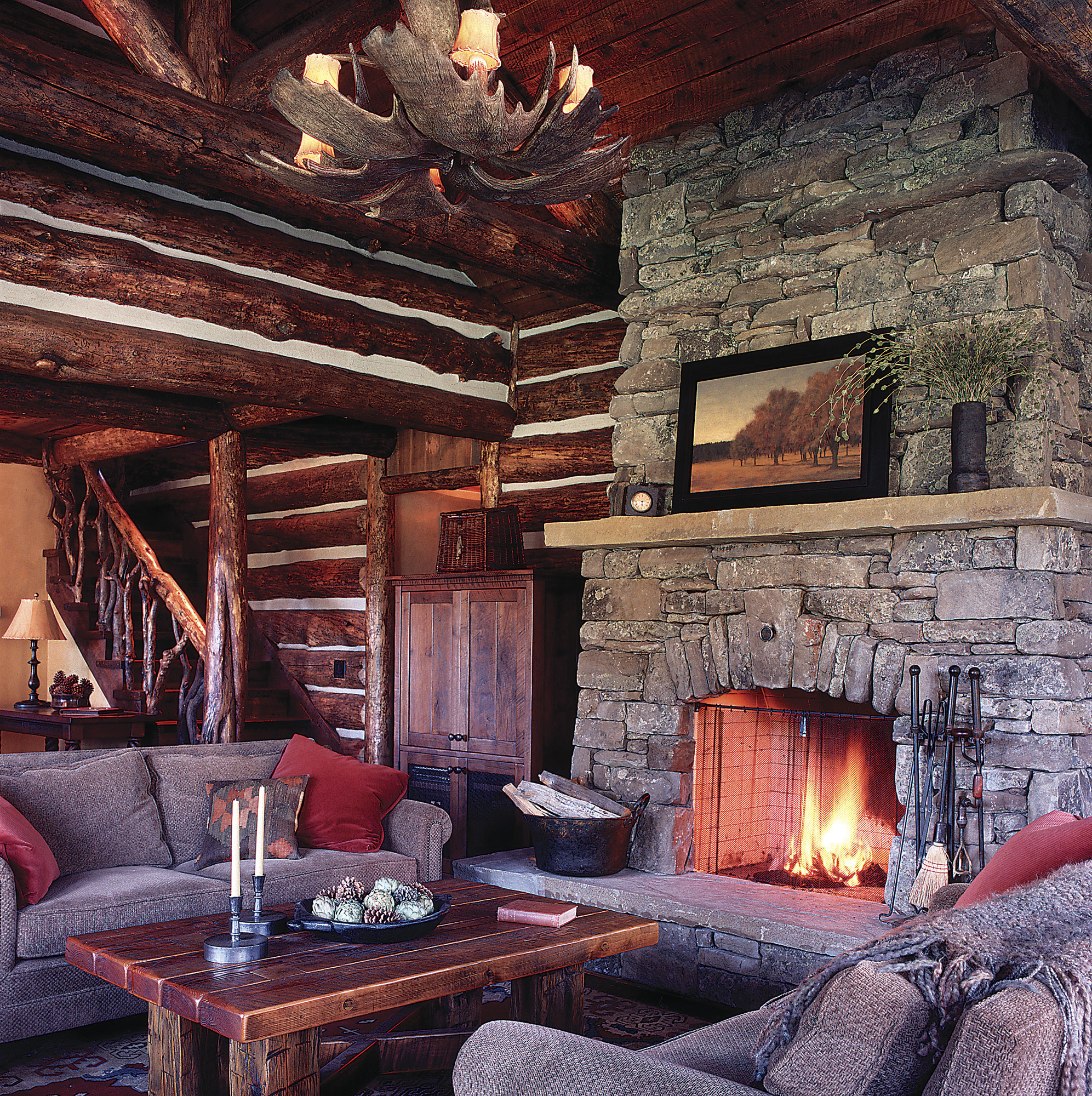 In the main living area a dry stack Harlowton fireplace anchors the room and is adorned with a landscape painting by Jim Urbaska. Interior designers Debra Shull and Phoebe McEldowney infused the space with a comfortable blend of antiques and contemporary furnishings, including moss green chenille couches with red accents for a punch of color. 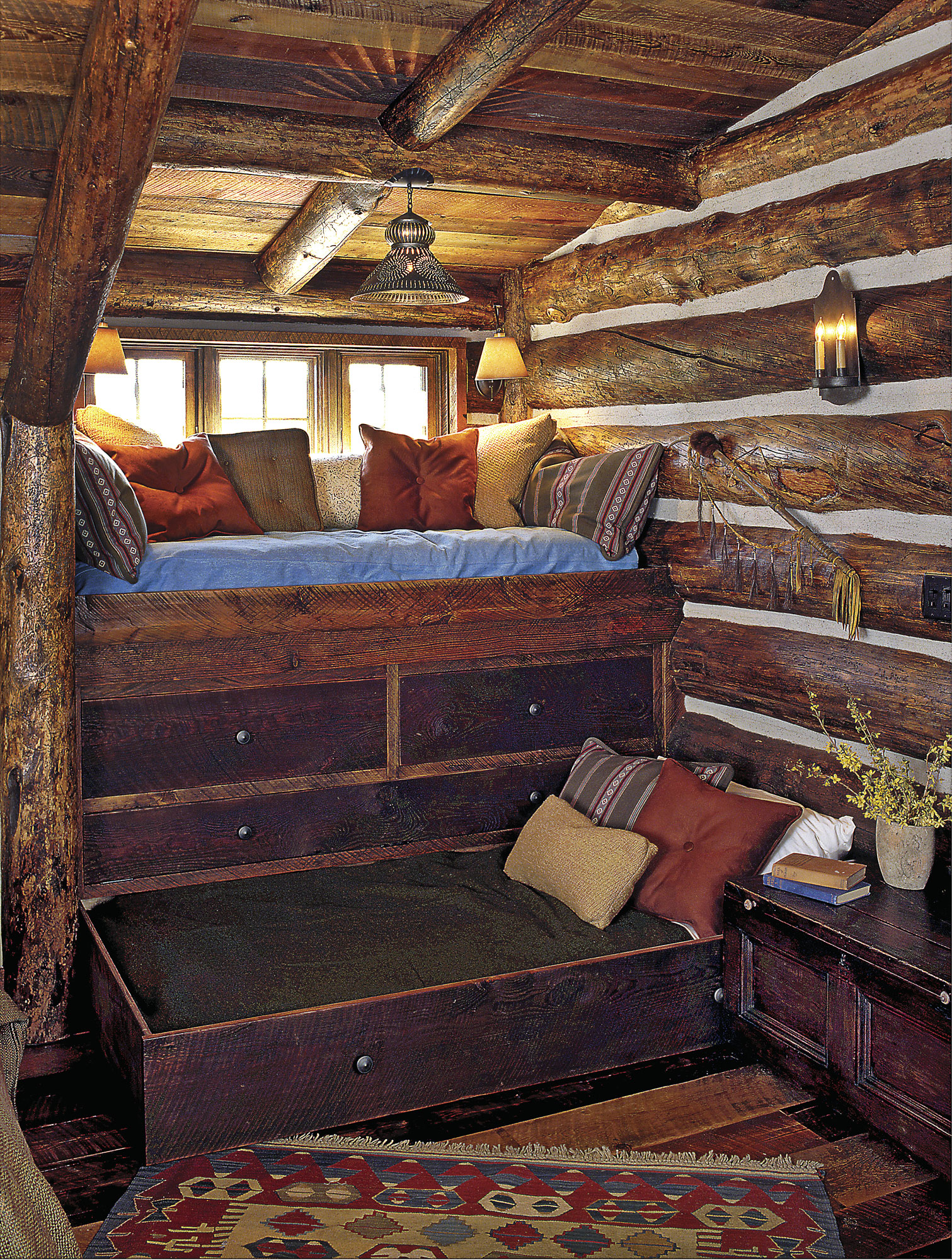 A built-in bunk and trundle bed made by Yellowstone Traditions is a clever space saver in the small upstairs bedroom. 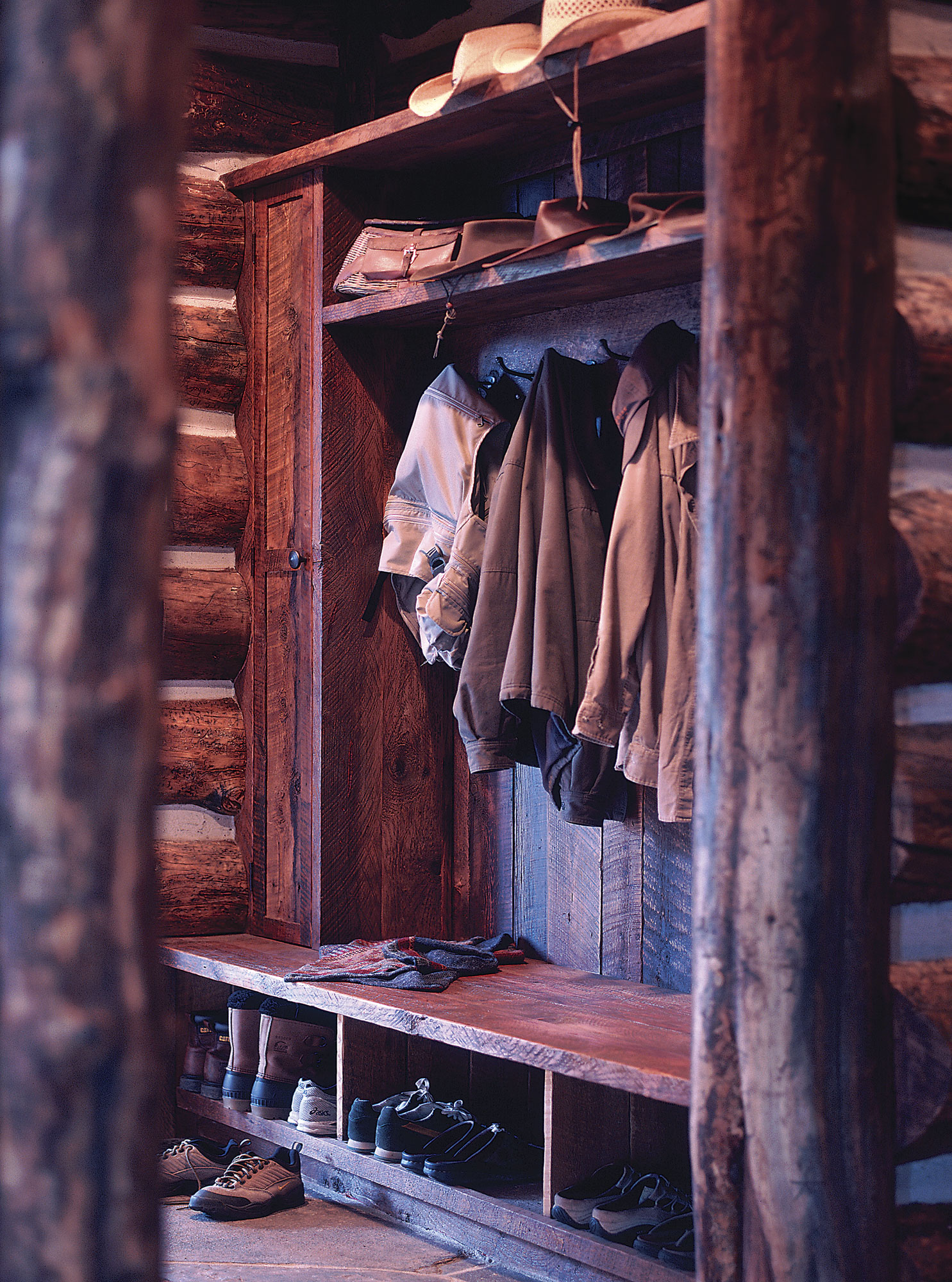 True to a homestead cabin’s roots, the entry of the home is welcoming and functional, with a built-in circle-sawn fir bench for shedding hat, coat and shoes in any season. 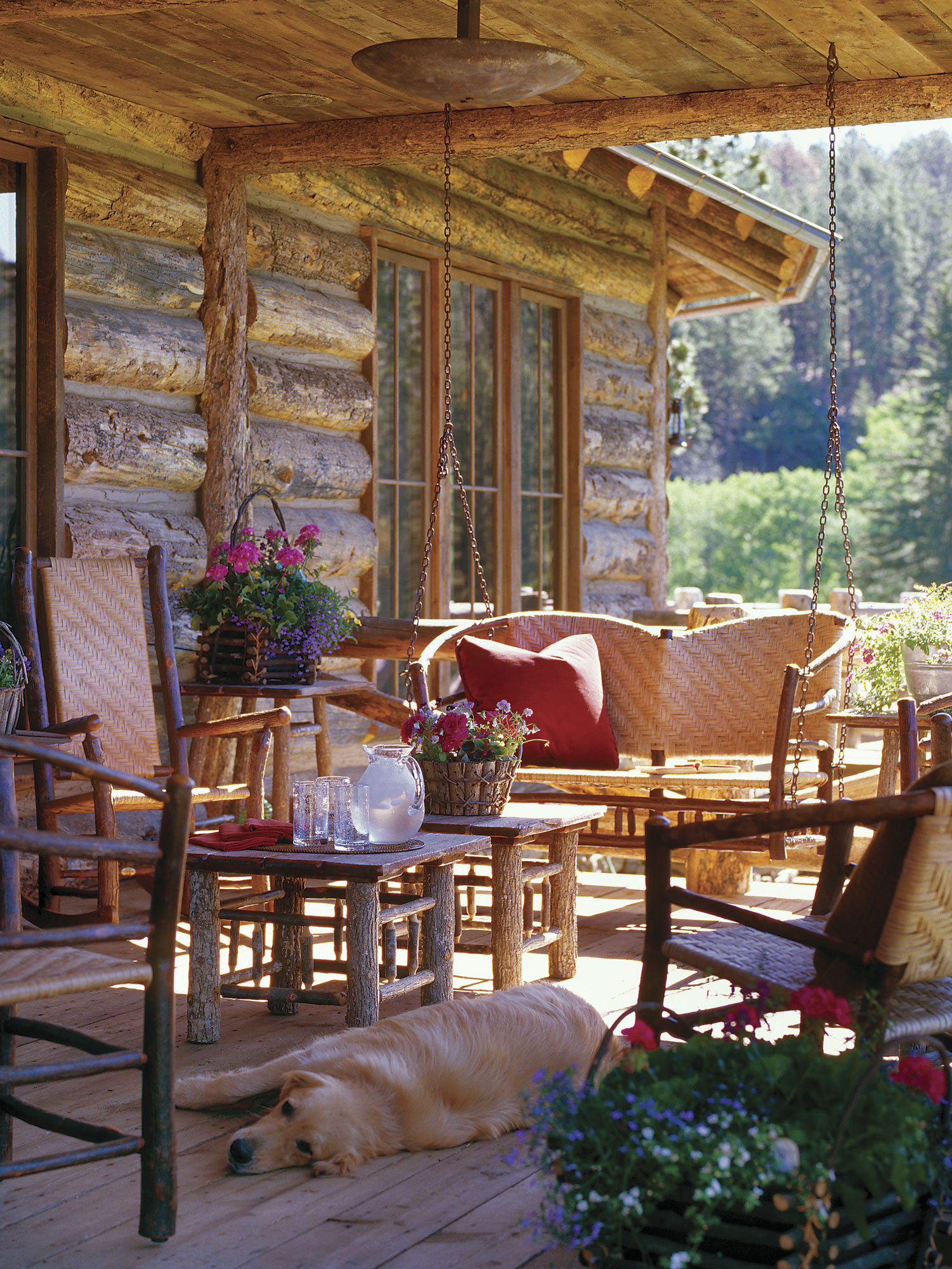 Outdoor spaces extend the living area with comfortable hickory furnishings on the back porch.