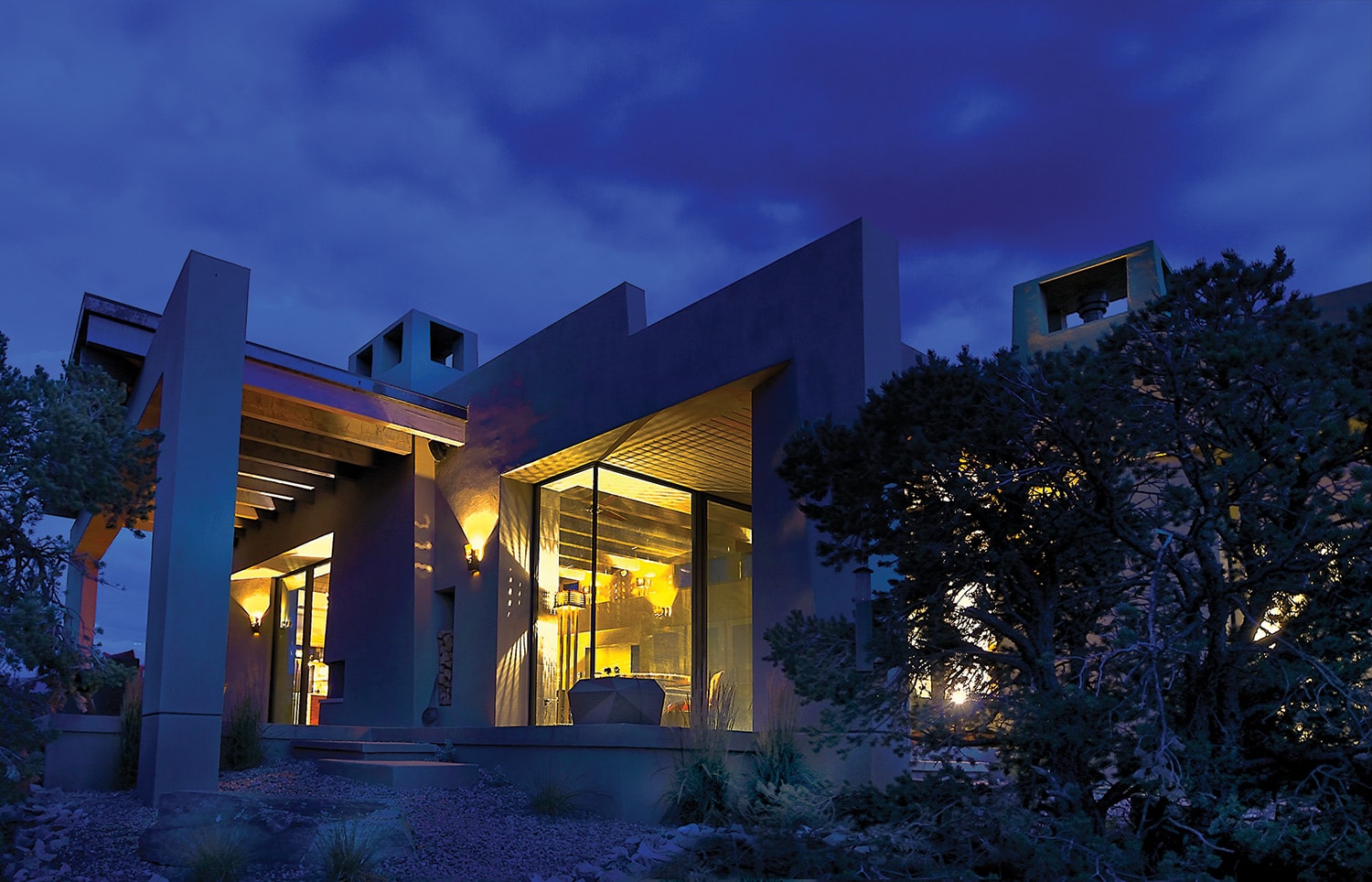 15 Mar Angles And Trapezoids Amid the High-Desert Skyline

Walking up to architects Lisa and James Evanson’s home in Santa Fe, New Mexico, a visitor’s first thought might be: This place is huge. 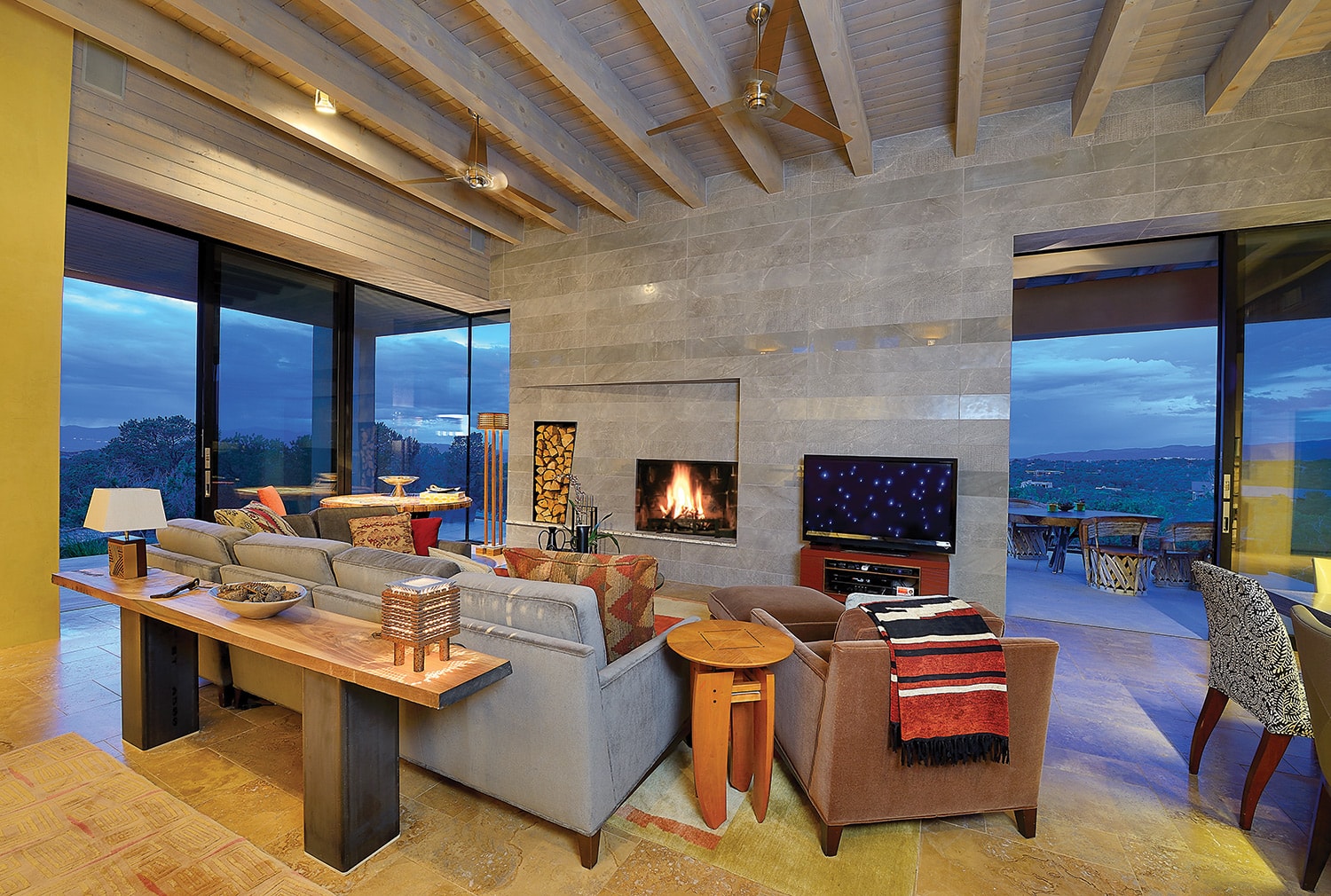 A floor-to-ceiling wall of oversized Spanish porcelain is the perfect background for furniture designed by architect and homeowner James Evanson. The great room opens to views of Santa Fe’s two renowned mountain ranges.

By the numbers, you’ll find a single-level house of 2,700 square feet — three bedrooms, two-and-a-half bathrooms, plus a three-car garage — and a two-story studio and workshop of 1,300 square feet with a full bathroom. There are also too many trapezoids to count. Trapezoid windows. Trapezoid cabinets. Trapezoid walls. Trapezoid stepping stones. Even the staircase in the studio is trapezoid shaped.

“You see a theme here,” Lisa says. But this is not surprising if you’ve followed the career of James Evanson. 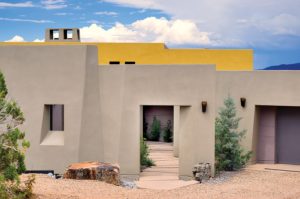 Trapezoid-shaped openings are carved out of stucco walls, creating a unique path to the entry courtyard. 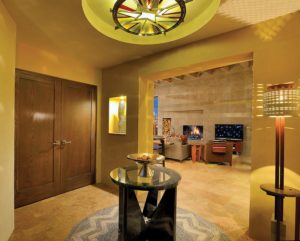 The entry into the great room provides a showcase for the table and lighting designed by James Evanson. The ceiling light combines bronze and fused glass.

Born in 1946 in Sidney, Montana, Evanson was a college art student before entering the ArtCenter College in Los Angeles, California, to study industrial design. The Vietnam War interrupted his education — he served in the U.S. Army as a helicopter pilot — but he returned to the ArtCenter in 1971, and a few years later was at the Pratt Institute in Brooklyn, New York, where he completed the five-year program in two years. There, he also met Lisa, a New Jersey native who earned a degree in architecture from Yale University. By the late 1970s, Evanson was designing furniture, was a figure in New York’s functional art movement, and he appeared in his first one-man international show in 1982. After marrying Lisa in 1984, they opened Evanson Showroom in New York City in the early 1990s, selling luxury high-end furniture. (Much of the furniture in their new home came from their showroom.) 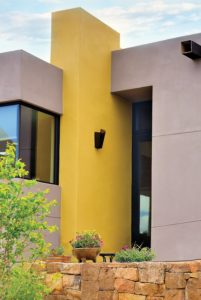 A side door into the kitchen is framed in part by a yellow wall that continues for 70 feet through the house. 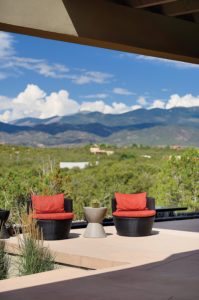 A sunny portal overlooks the tops of piñon and juniper trees to the mountain range beyond. A low, steel water fountain parallels the portal.

Ten years ago, James began longing to return to the West. After looking in other states, the Evansons bought a house in Santa Fe, “to break into the Santa Fe experience, so to speak,” James says. “We thought if we didn’t like it, we could sell it.”

They lived in a condominium while remodeling a house, hiring Santa Fe’s Prull Custom Builders for the construction. Satisfied with Santa Fe’s climate, art scene and culture, the Evansons decided to design a permanent home together.

James handled the exterior. Lisa oversaw the interior and finishing colors. “We both sat around and yelled at each other,” Lisa says, “but we both like the end result.”

They knew what they wanted. “We’re very contemporary,” Lisa says. “Being able to mix the traditional and the modern is kind of the way we design furniture.”

“I think that’s the way to approach architecture here,” James says. “It’s really in a certain tradition, but then you try to push it.” Every room offers spectacular views. Walls are layered — thicker for private space — and stretch outside, making the house seem much larger. 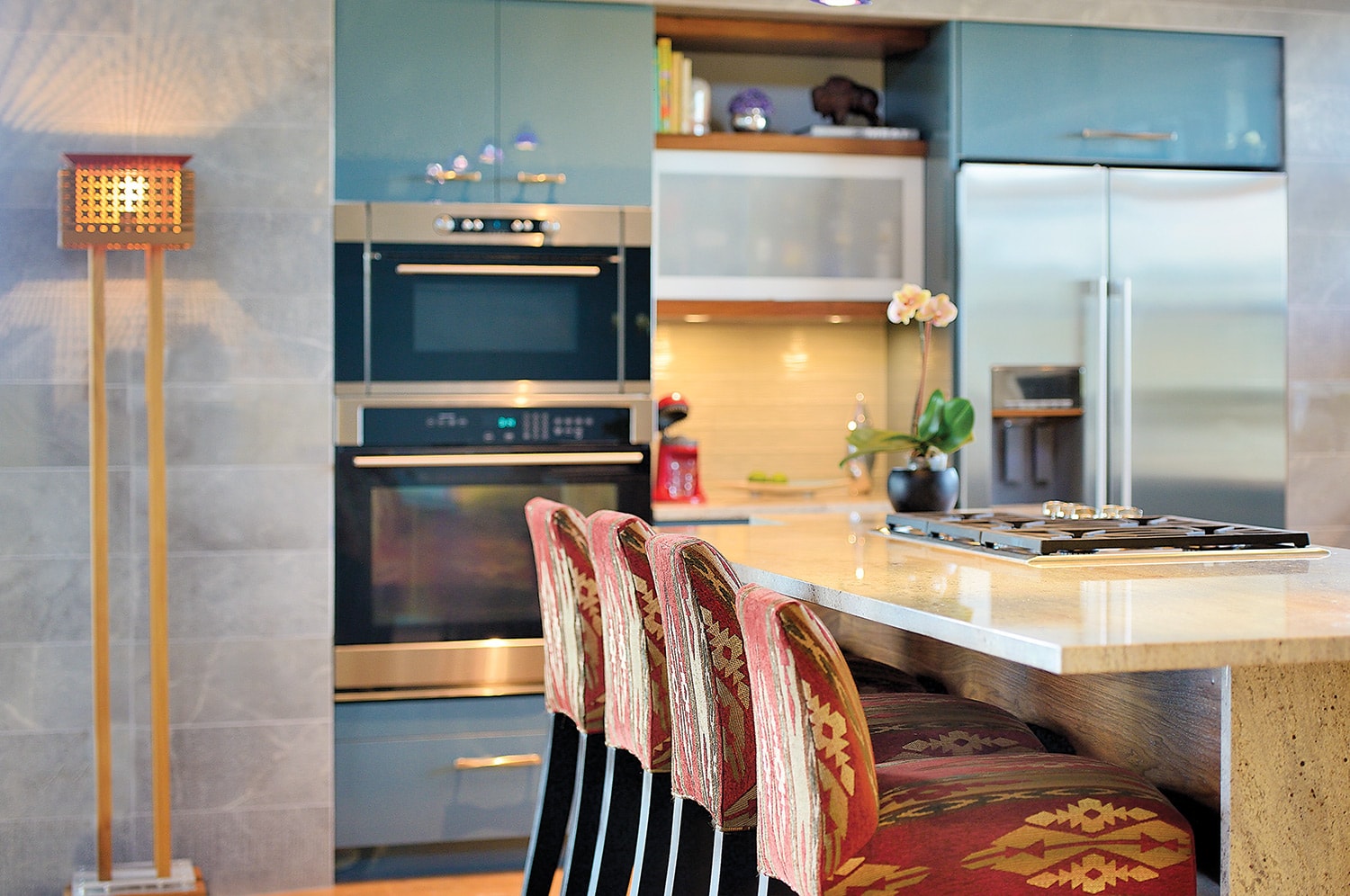 In the kitchen, bar stools nestle up to a granite-topped island. The Lighthouse floor lamp, which stands to the left, was designed by the homeowner in 1984.

“Each area has a particular space, but it serves as one large grid,” Lisa says. “It’s not a big house, but it’s exquisitely detailed.”

Those details range from the drawers built into the studio’s staircase to the light fixtures. While in New York, James experimented with cutting grooves into fiberboard and came up with “lighthouses,” boxes surrounding a light bulb so that the light shines different patterns on the ceilings or walls. Several of his lighthouses rest on shelves throughout the home and studio. He also cast and fused glass and bronze together to make a light fixture for the main house’s entryway. 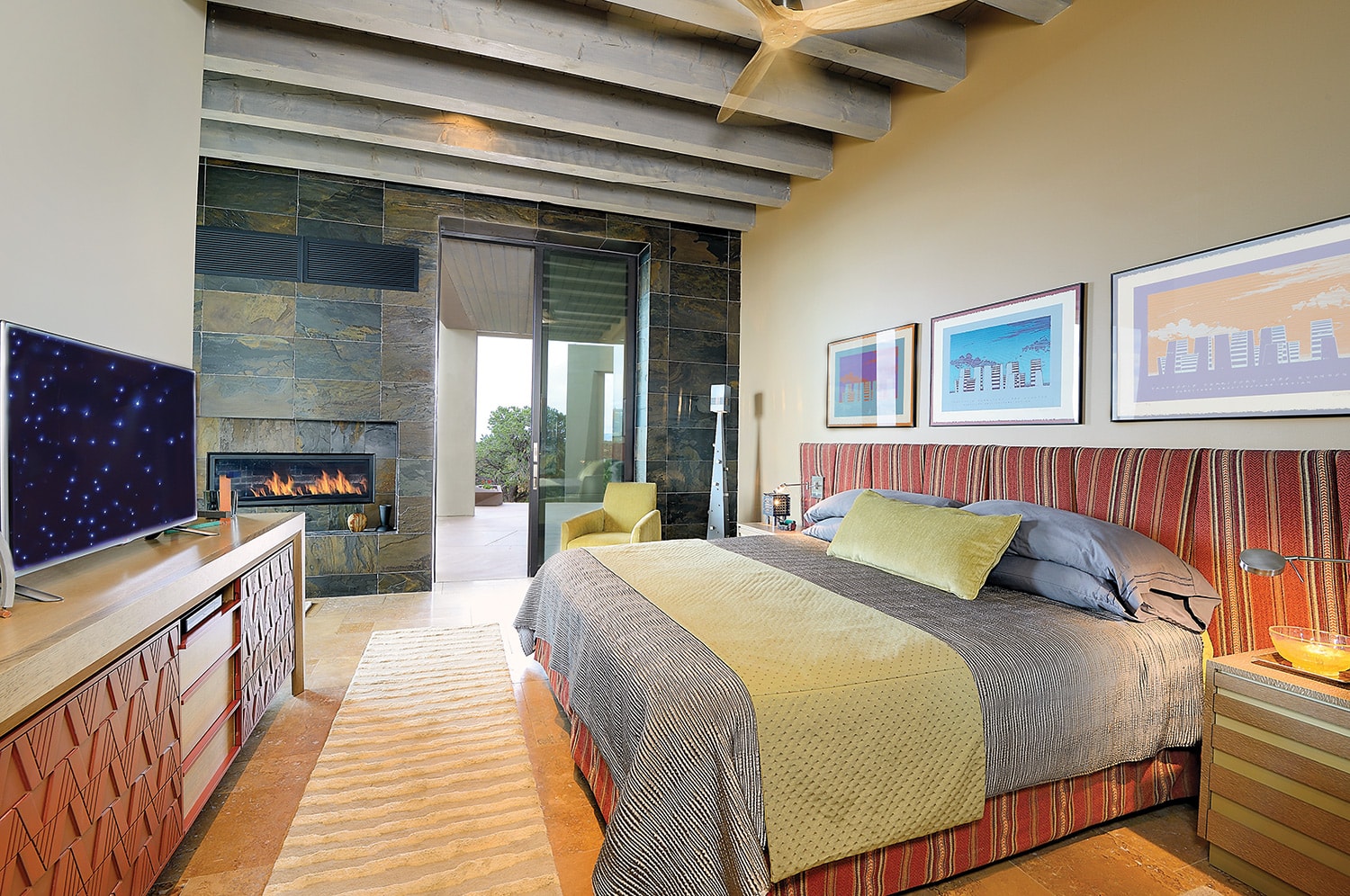 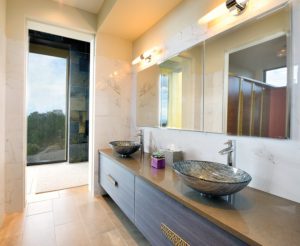 Bronze and ruby create a luxurious theme complemented by marble and concrete walls, a balance between the raw and the precious.

“We wanted a playful, contemporary but transitional feel,” Lisa says. “We didn’t want it to feel too stark. Contemporary can sometimes feel that way.” 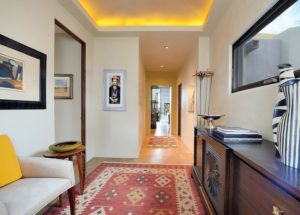 For construction, the Evansons again called upon Prull Custom Builders, founded by Will Prull in 1981. Although Prull has built contemporary homes in Santa Fe, he called the complexity in the Evanson project “extensive.”

“Structurally, it’s quite complex. You have a lot of plane changes in terms of window and door penetrations of walls,” Prull says, adding that he had James on site when framing the house to make sure all angles were as the architect envisioned.

The house went up in only 11 months and won Best Kitchen and Exceptional Collaboration Between Builder & Client honors at the 2017 Haciendas — A Parade of Homes.

The house is a beacon of light on the horizon, overlooking Los Alamos, New Mexico, in the distance.

“It’s fun,” Prull says, “because when someone has a vision as unique as they have, and you help bring that to fruition, and they’re completely tickled by the outcome, you feel like you’ve just had a really great experience and that they’re going to enjoy it for a long, long time.”