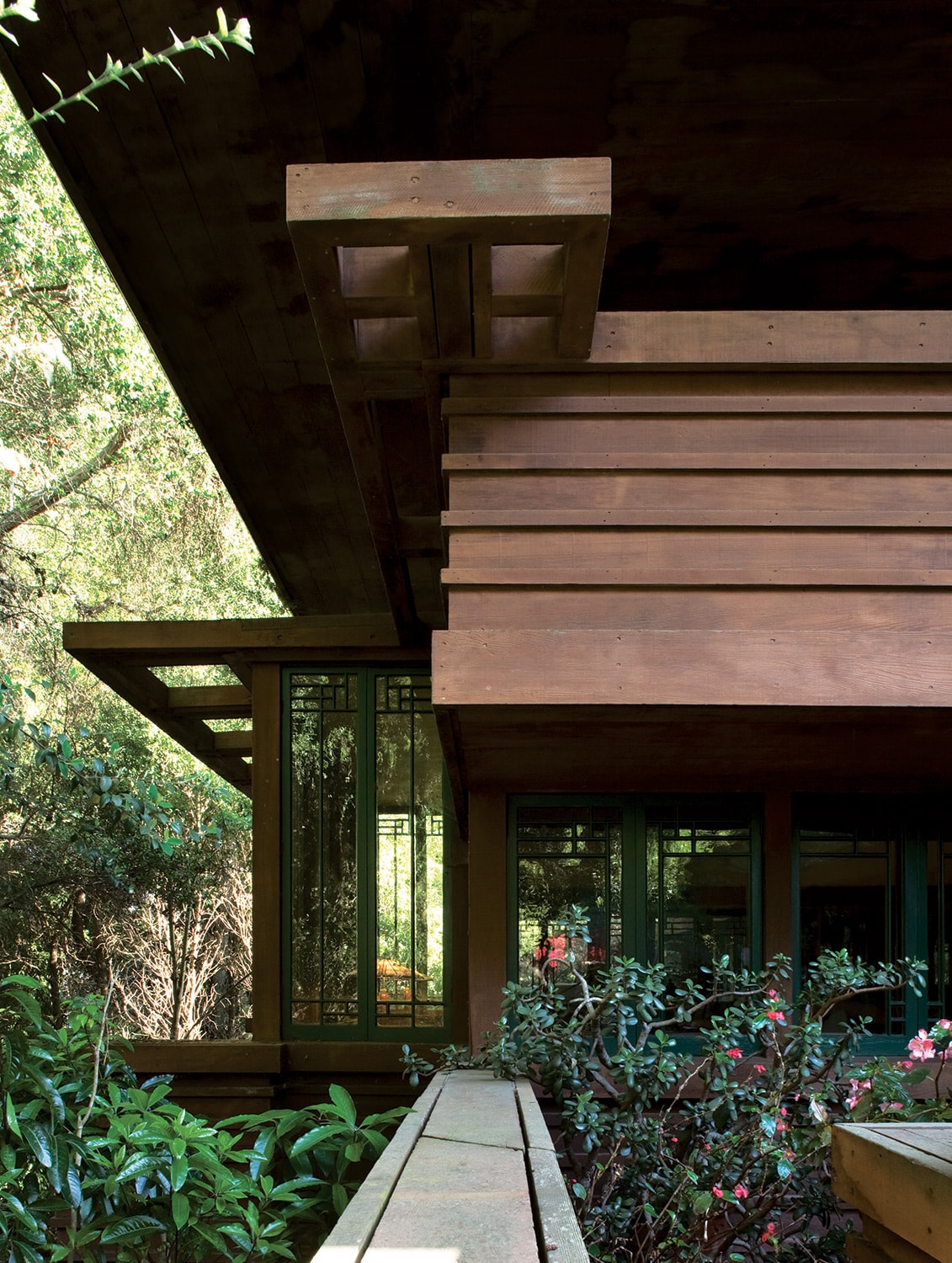 The living room windows in this home designed by Frank Lloyd Wright in 1909 feature tea-tree motifs on the latticing to symbolize the trees on the property.

T.C. BOYLE’S NOVELS AND COLLECTIONS OF SHORT STORIES have dealt with a wide range of human emotions and predicaments. In 2009, the writer published The Women, a novel about Frank Lloyd Wright’s relationships with his three wives and his mistress, Mamah Cheney. Boyle was inspired to write this novel by having raised his family in a house designed by Wright in 1909, the George C. Stewart House in Montecito, near Santa Barbara, California. 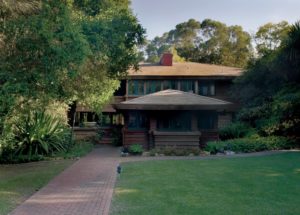 The north façade of the home, complete with Prairie-style, low-overhanging roofs.

In 1993, Boyle and his wife, Karen, bought this house, which had endured years of deferred maintenance and ill-advised remodeling. The couple then began the painstaking task of restoring the Stewart House to its original historic character, a task that included necessary structural upgrades. They raised three daughters in this home, (who are now all grown and have moved out), and the two of them have been living there for 25 years.

“I wrote The Women as a way of informing myself about the architect who had designed the house I was living in and restoring,” Boyle says. “I see him as one of the original hippies, a touchstone figure who brought us out from behind the walls of closed-in rooms and back into the embrace of nature. Of course, I do suspect that he may have been a wee bit full of himself. Was this healthy ego justified in his work? A thousand times over. What does it matter, when it is the work that lives on?” 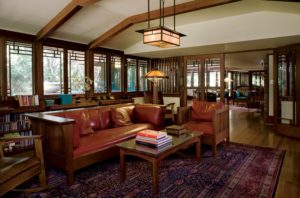 In 1909, George C. Stewart decided to build a vacation home on the California coast, on a 5-acre lot he owned in Montecito. His wife, Emily, wrote to Wright to ask him to design their getaway after seeing articles about his Prairie-style houses in magazines. He designed a 5,000-square-foot, six bedroom “summer cottage” for them, which would become Wright’s first completed commission on the West Coast, and his only Prairie-style residence in California. Wright considered his design for the Stewart House to be important enough to include a large drawing of it in his Wasmuth portfolio, the collection of his plans and drawings that he and Cheney brought with them to Europe for a book on Wright’s work that was published in Germany.

The Stewarts owned this house for 33 years. After two more owners during the next 50 years, a fourth owner bought the house in 1992. He did some cleanup of the grounds and made a few interior renovations before putting the house on the market. Karen saw it after that, and she fell in love with it immediately. 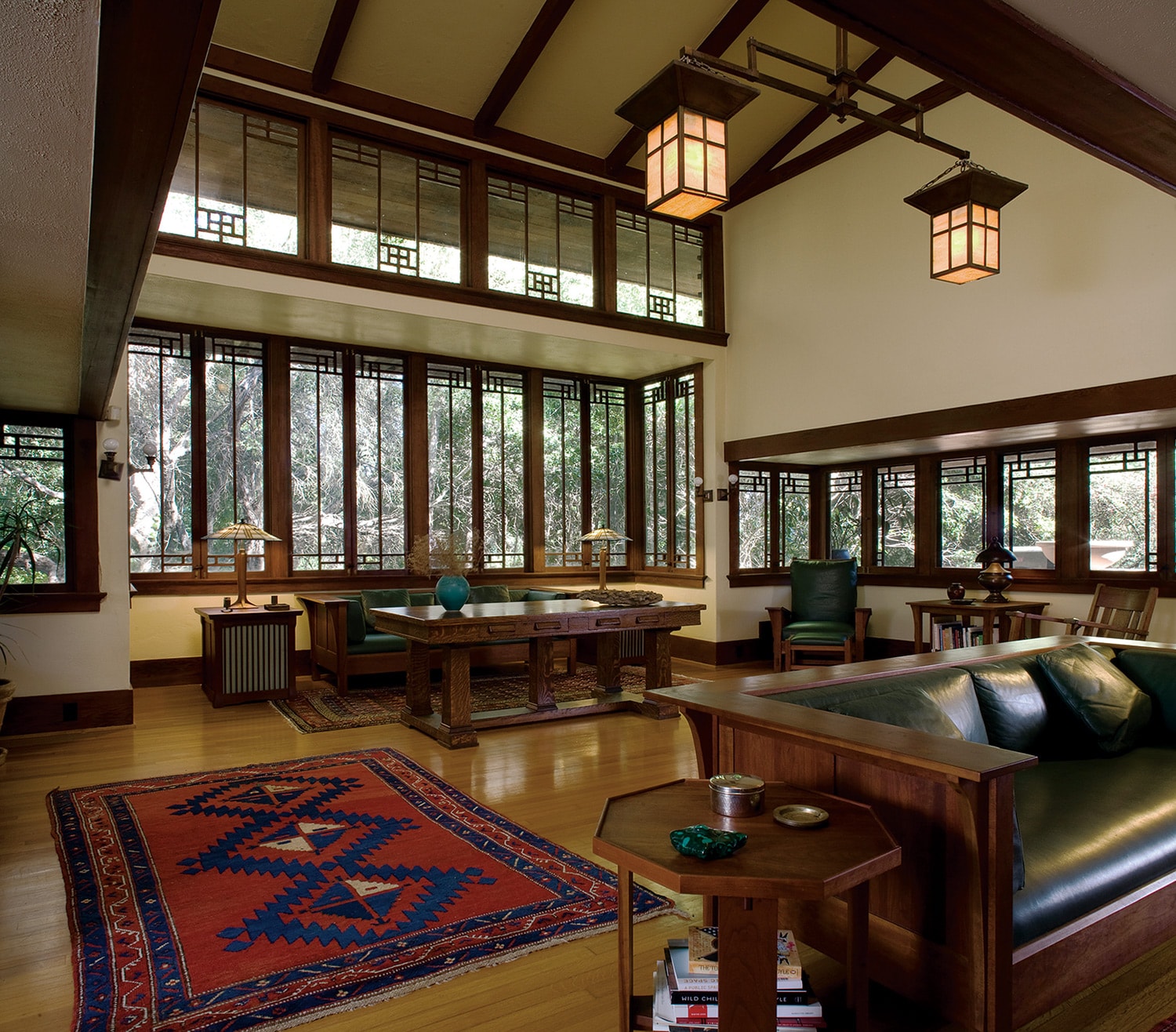 “She called me from Santa Barbara — we were living in L.A. then — and she began sobbing over the phone because she loved the house so much and was afraid I wouldn’t. We both came up the next day and immediately bought the place,” says Boyle. 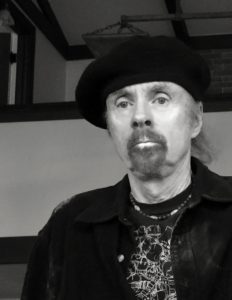 Author T.C. Boyle in his home in Montecito, California.

When I asked the famed writer what he liked best about the house, he gave a detailed answer: “This is a very livable house. We raised three children here, and there was plenty of room for everybody. We were the first family that had lived here since the 1940s, but we rediscovered the fact that this really is a family house.”

Boyle also described his first impression of the Stewart House on the day they decided to buy it. “My first view of it was of the north side of the house, and then I was led in through the door on that side, under the amazing cantilevers and into the two-story atrium room, where our realtor, Bill Slonikor, was standing before the fireplace. Bill, who subsequently became a close friend, was an expert on Wright’s work, and especially on the Stewart House. He provided a running commentary as we walked through the rooms, and the enormous charm and utility of the place began to astonish me all over again. It still astonishes me, all these years later.”

Upon entering the Stewart House, visitors immediately react to Wright’s use of low ceilings that open into a grand space, or “compression and release” as he called it. A 6.5-foot ceiling just inside the doorway rises to a breathtaking, 20-foot-high cathedral ceiling in the living room. A tall brick-faced fireplace dominates the west wall. An overhanging balcony above this fireplace runs the length of the west wall, creating an impressive view of the living room below. Wright placed the other two public rooms on the north and south ends, flanking the living room, thus creating a pleasing sense of symmetry. 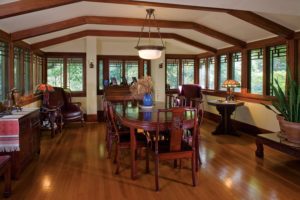 In the dining room, a coved ceiling is lined with pent beams.

The house has a cruciform floorplan, like many of Wright’s other houses. To the south is the formal dining room, and to the north, the library. The kitchen and pantry are in the west wing, balancing out the living room, which projects off the east side. In the dining room and library, Wright placed a 6.5-foot ceiling at the entry, then raised the rooms’ heights to 8.5 feet and lined the ceilings with pent redwood beams. There is a short rise of steps into the living room from both rooms, which creates a dramatic change as you walk into the much grander space.

All three of the public rooms are flooded with natural light from rows of banded windows that line every exterior wall. These elegant, redwood-framed casement windows all have an Arts-and-Crafts T-shaped motif, which symbolizes the tea trees on the lot. The views from each of the public rooms are of the sylvan surroundings, creating a serene, peaceful ambience and enhancing the indoor-outdoor effect that Wright intended with all of his Prairie-style houses. There are a total of 365 of these windows throughout the house, and they are all original. The windows still have their original latches, and they open outward. The floors in the three downstairs public rooms are all oak. The library features built-in bookshelves, and both it and the dining room have projecting bays in the center of their far walls.

When the Boyles moved in, all of the interior woodwork had been painted white by a previous owner. So the Boyles stripped the woodwork in the three public rooms on the ground floor. The foundation was on piers that were not earthquake-proof. So they decided to put in a new foundation built of poured concrete, and had the house earthquake-retrofitted. They also replaced the old shake roof with one made of composite shingles that matched the appearance of the original roof. The Boyles also extensively landscaped the lot, creating water features for the yard, building privacy fences and constructing a parking pad. The current 1.1-acre lot still has an exotic and romantic ambience, with its thick, semi-tropical vegetation, including a variety of ferns, century-old tea trees and towering eucalyptus trees. 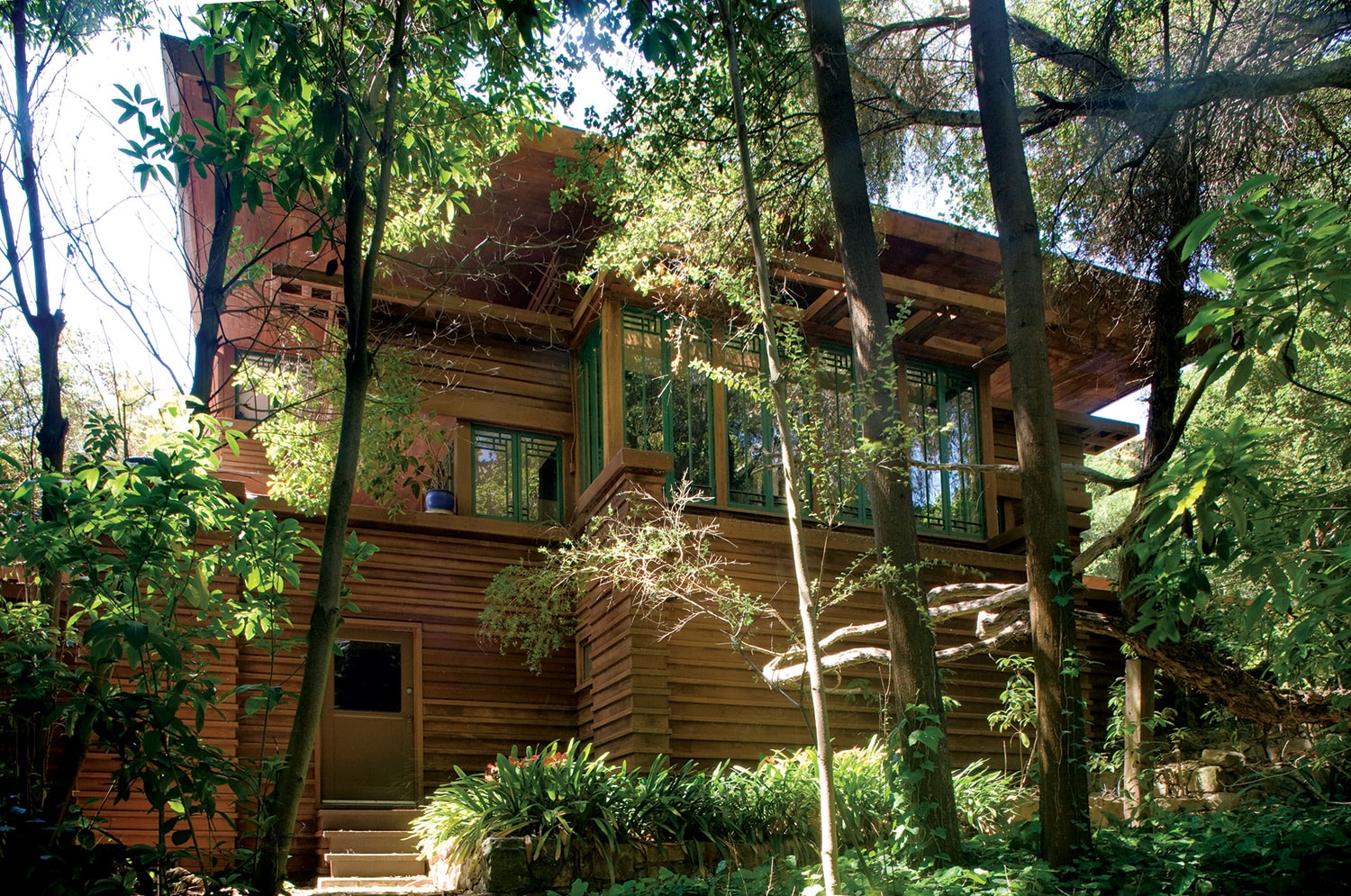 The home’s east façade is a showcase of lush, semi-tropical vegetation on the 1.1-acre lot.

The Stewart House was almost lost during the recent Thomas Fire, which burned 282,000 acres in Ventura and Santa Barbara counties. “The fire came within 2 miles or so,” Boyle says. “The Thomas Fire, through the heroic efforts of the firefighters, was kept north of us, along the face of the Santa Ynez Mountains, though we remain buried in ash. This fire was more terrifying [than the Tea Fire of 2008] as it went on for two weeks, and as with the last one, I frantically cut back the trees and went up on the roof with a hose. In all, we were evacuated for 10 days.”

Every devotee of Wright’s architecture, as well as Boyle’s books, can be thankful that the Stewart House still stands, and is in such good hands.