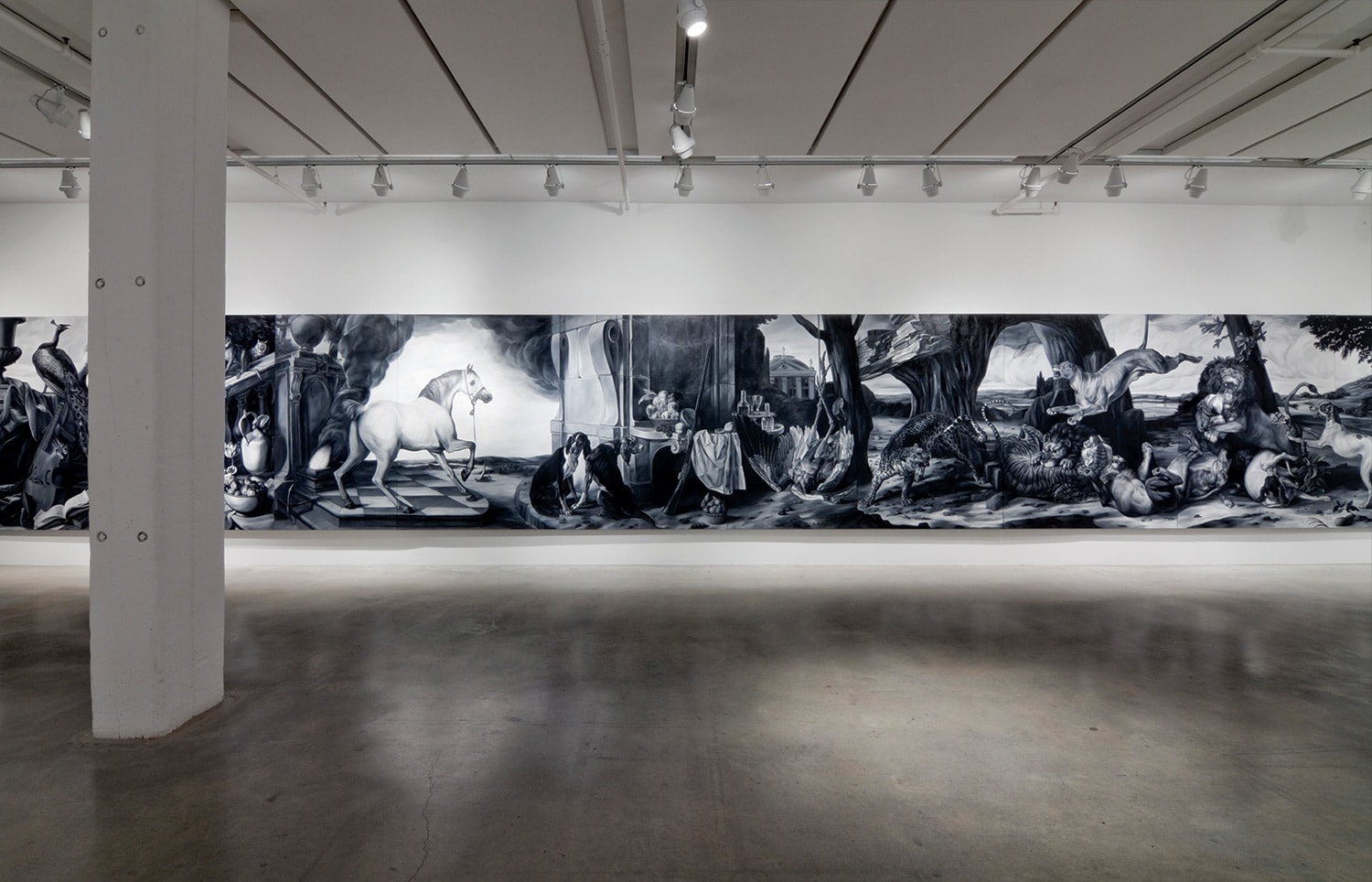 SHELLEY REED’S IN DUBIOUS BATTLE might well be the sort of artwork Herbert Read had in mind in 1963 when he wrote, “In the history of art, the genius is finally all that matters. … Art is distinguished by its sudden glories, its irrational and irregular irruptions of light in the midst of a universal darkness.” At 47 feet long and 7 feet high, the painting is a showcase of the power of light and dark, and among its sudden glories and irrational irruptions is the fact that the entire palette from which it was created consists of two colors: black and white. 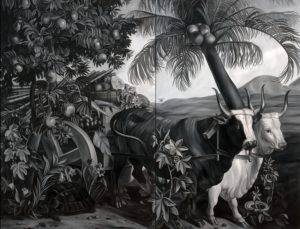 Whether it’s the immense panoramic narrative of In Dubious Battle or Bittern (after Oudry), which measures a more modest 71 by 93 inches, Reed’s paintings captivate viewers immediately and force them to think about what they are seeing in ways that few artworks demand.

Reed chooses details for her paintings from historic works by European realists painting in the 17th and 18th centuries, a period of enlightenment when there was a profound interest in science, nature and the animal world. She chooses similar details from a variety of artists to demonstrate how painters reference one another and how art history informs our understanding of contemporary art.

The immense scale of her work would be diminished by an artist with less consummate skill as a painter: Museum directors, critics and gallery owners all agree that her exquisite technical prowess draws the viewer in first. “The mastery of skill was the first thing that attracted me to her work,” says Nikki Todd, owner of Visions West Contemporary in Denver, Colorado, which featured Reed’s work in a recent exhibit. “It forces you to think about what she’s doing, why she’s chosen this approach. And the scale — I’m impressed by the sheer power of will it must take to paint something that detailed on such a scale!”

At the same time, and perhaps because in an era of 2.07-megapixels-per-frame HDTV, our lives have become oversaturated with color, another of the most striking aspects of Reed’s paintings is simply that they are monochromatic. 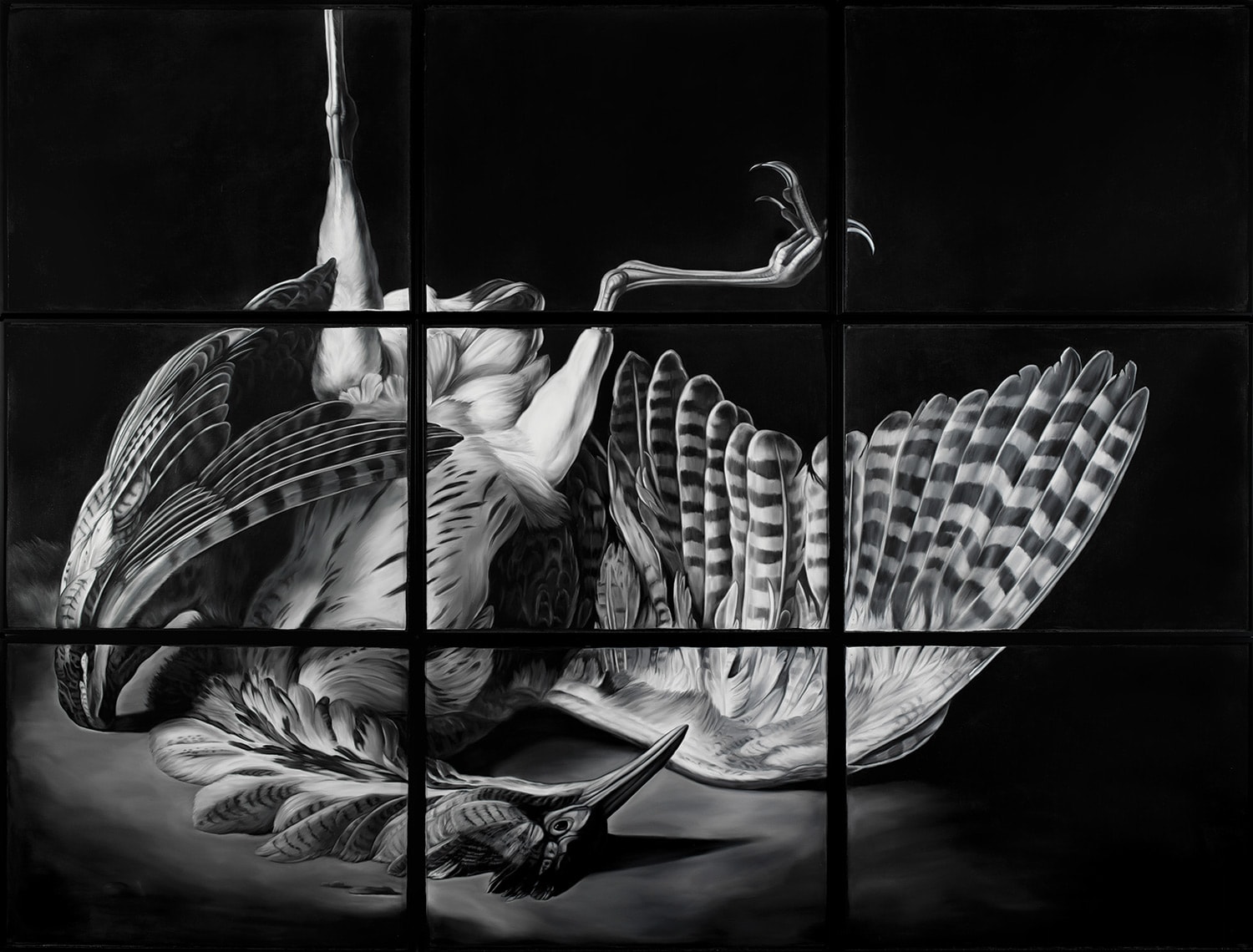 All three elements — size, monochrome and technique — converge to create an extraordinary aesthetic experience. As with many artists, Reed is hesitant to pin down the meaning of her work, but she is fluent in the language of art history, and can speak in effortlessly improvised paragraphs about aesthetics and philosophy in general, and especially as they relate to what she’s trying to accomplish. Reed talks expansively and with verve about art and literature, and has the charming ability to verbally capitalize on the most relevant points. When asked about her black-and-white style, for example, she says, “I was, of course, trained in color at art school. But so often when we talk about ‘The Really Important Things’ in art, color often stops the conversation.”

Reed’s turn to black and white happened to coincide with her discovery of highly stylized paintings by artists such as Melchior d’Hondecoeter [1636–1695] and George Stubbs [1724–1806]. “Art school is great for teaching you how to paint,” she explains. “But the challenging part is figuring out what to paint.” As she haunted the museums of London after graduating from the School of the Museum of Fine Arts in Boston in 1984, she realized many of the works she was seeing in person she had originally seen in old art books, many of them in black and white rather than in their true colors. “So here I was, living in London, trying to figure out what to paint, but already heading for monochrome.” Her perusal of old art books brought her to one of Stubbs’ hunting scenes, with intricate details she found mesmerizing. “One dog in particular from a certain painting really stood out for me,” she says. “And so I did a 6-foot painting of just the dog, but in black and white.”

In this case, “The Really Important Thing” at stake in her use of images from the 17th and 18th centuries is the endurance of their emotive force. “I’m fully conscious of the original work as it materializes in the painting I’m doing,” she says, “especially because that work done hundreds of years ago still feels relevant today.” 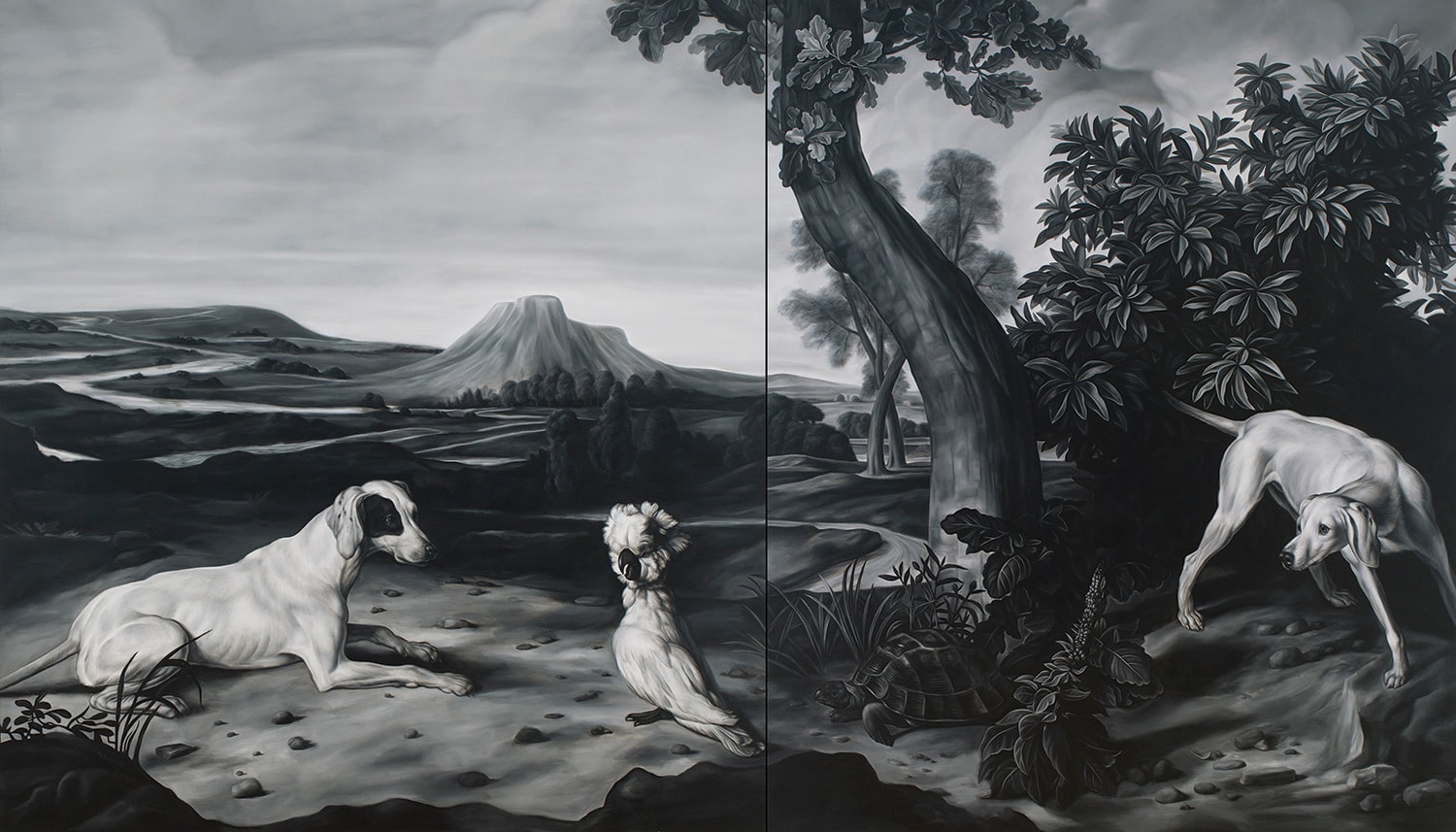 In 1966, the feminist literary theorist Julia Kristeva coined the term “intertextuality” to describe the dynamic process in which a literary work partakes of its predecessors in order to generate its own meaning. While the jaded term “appropriation art” is sometimes used in referencing Reed’s work, intertextuality seems better suited and more precise, because her work so clearly references (often in the titles) works of art from centuries before, without irony or any postmodern repudiation of its value.

Reed’s use of Hondecoeter’s subjects is akin to the way Shakespeare appropriated elements of Ovid and Sophocles, incorporating them into his own productions in the literal sense of making his predecessors part of the body of his own new work. This also was not ironic, precious or postmodern. It was then and remains now the height of a literary sensibility available only to the artist who absorbs the past, who devours the aesthetic moments generated by those who came before.

The title, In Dubious Battle, for example, puts us in the realm of poet John Milton, without replicating Paradise Lost. Ezra Pound famously announced that “The Really Important Thing” was to “make it new,” a dictum no less profound for having been ignored by legions of the immature trading merely in gimmickry. 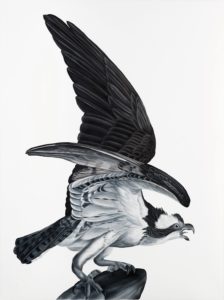 The National Museum of Wildlife Art in Jackson, Wyoming, was among the first to exhibit Reed’s work in the West, in 2013. “Several things about Reed’s work compelled us to get her in the museum,” Curator Adam Harris says. “The first is simply the skill with which this work is executed. And second, we loved that her work references other classical work — it literally throws you back in time. And finally, that this is all done in black and white really makes it contemporary.”

Nick Capasso, director at the Fitchburg Art Museum in Fitchburg, Massachusetts, amplifies these points, emphasizing that Reed’s work is distinguished also by its sincerity — a word he uses repeatedly in discussing her work. “Mark Tansey, Barbara Kruger, Jill Levine, artists like that — their use of other artworks is always ironic and designed to ‘interrogate’ the relationship between image and meaning. But Reed’s work isn’t anything like that. She’s not interested in the underpinnings of art theory or ‘appropriation;’ she’s interested in resurrecting images from the past that still have a profound power to affect us today.”

This, along with the size of the work, immerses the viewer. A painting on such a large scale puts the viewer into the frame, which can, in turn, produce unusual effects that further enhance the experience of seeing Reed’s work. “The very fact that some of her paintings are so big makes them powerful,” Capasso says. “You, as the viewer, end up inhabiting the space of the picture itself. For example, being in the presence of In Dubious Battle is like falling through the looking glass: You don’t know exactly where you are or how big you are. Things cut through the picture plane, scale shifts, shadows are cast into the picture from behind the viewer, which gives the impression that there’s something behind you. It can be a little unsettling, but that’s part of the drama and unease that permeates her work.”

Capasso, as with most people exposed to Reed’s paintings, relishes trying to pin down the je ne sais quoi that distinguishes her work. “Her paintings are overtly, so completely beautiful. Beauty is a part of her strategy, but along with all that is the clear notion that something’s wrong in this world, from the anthropomorphizing of animals to the weird shadow effects to the monochrome presentation.”

Thoughtful people spend their lives in pursuit of art and literature, often accumulating immense and impressive collections. But against the vast backdrop of cultural history, what always stands out are those few works that compel us to imagine the unimagined, in the same way that Reed’s paintings remind us that what is truly new always emerges from our sense of the past — and that seems like a Really Important Thing.