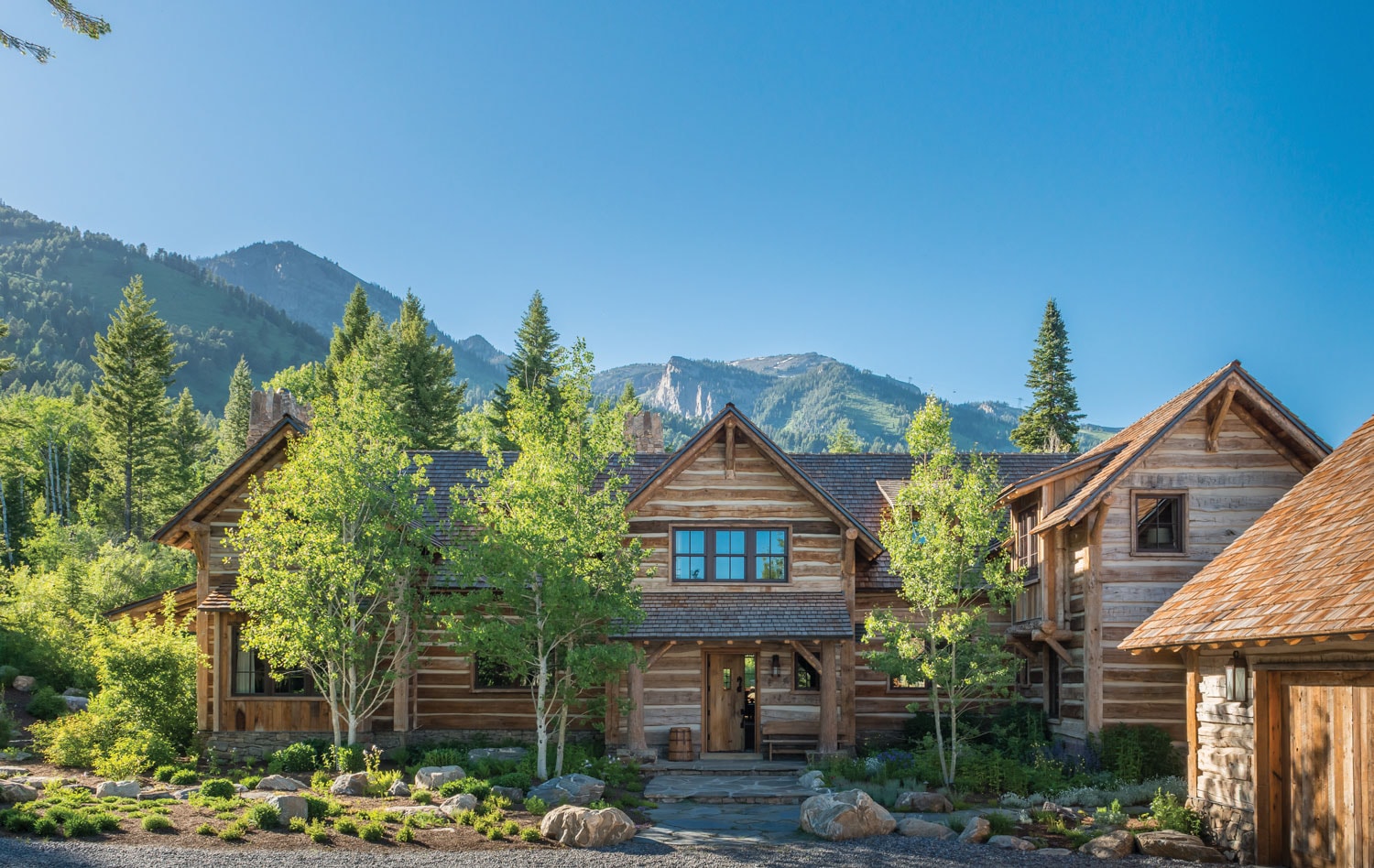 SOMETIMES, IT’S THE FINAL STATEMENT THAT SAYS THE MOST about an architecture project. The owners of a property in Wilson, Wyoming, had just finished building their unique handcrafted home when they realized they still had a dilapidated historic log cabin to deal with. Some might have left it to fall down, or ordered a few pieces of log furniture and called it a day, but instead, the owners directed Yellowstone Traditions (YT) to reconstruct the cabin. They also tapped Terry Winchell, owner of Fighting Bear Antiques and an expert on Western furniture, antiques, and collectibles, to furnish the cabin as he saw fit. 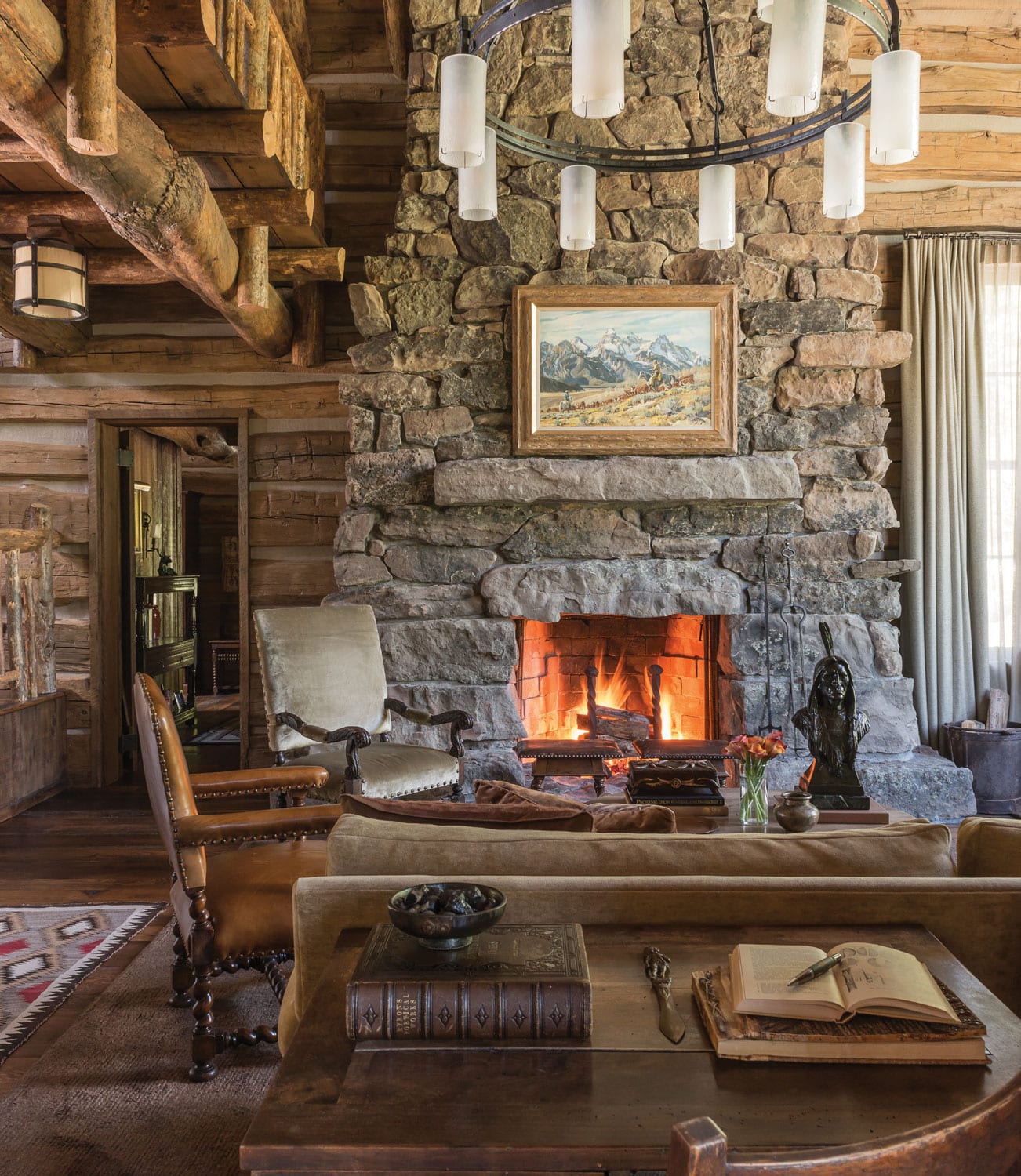 Winchell saw an opportunity to honor the history of the area, the legacy of the property, and the spirit with which the owners had approached their home-building project — with a nod to tradition. “There was an old-time trapper up there, and he probably lived there,” explains Winchell. “He was kind of a hermit; that area gets a lot of snow in the winter. I said, ‘Let’s do it just like it would have looked at the time.’” 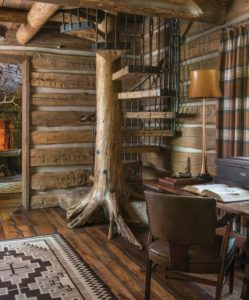 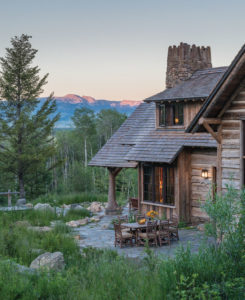 The structure was sited to take full advantage of its iconic Sleeping Indian views. A doorway leads to an outdoor patio and a hot tub made to look like a wooden rain barrel.

Winchell had previously purchased the contents of two cabins from a neighboring property, which had, decades prior, been relocated from Square G Ranch, a historic Teton National Park inholding on Jenny Lake. The cabins had been outfitted with original, handcrafted lodgepole pine furniture made by the owner, Albert Gabbey, and Bob and Jack Kranenberg, the latter of whom built the landmark Million Dollar Cowboy Bar on Jackson Hole’s Town Square in 1937. As artisans, notes Winchell, “They were self-taught, but they really made good things.”

The old trapper’s cabin is now the ultimate retreat. The only building original to the site, it was rebuilt as it was — that is to say, imperfectly non-plumb. Winchell equipped the porch with period-appropriate furnishings and regional relics, including antlers, vintage horse tack, snowshoes, signage, and hickory chairs. The interior is fitted with a Mission oak chest, chairs made by Wesley Bircher, and a desk and lodgepole-pine daybed built by Bob Kranenberg. The 1930s-era painting hanging over the bed is signed “Benson 1935.” 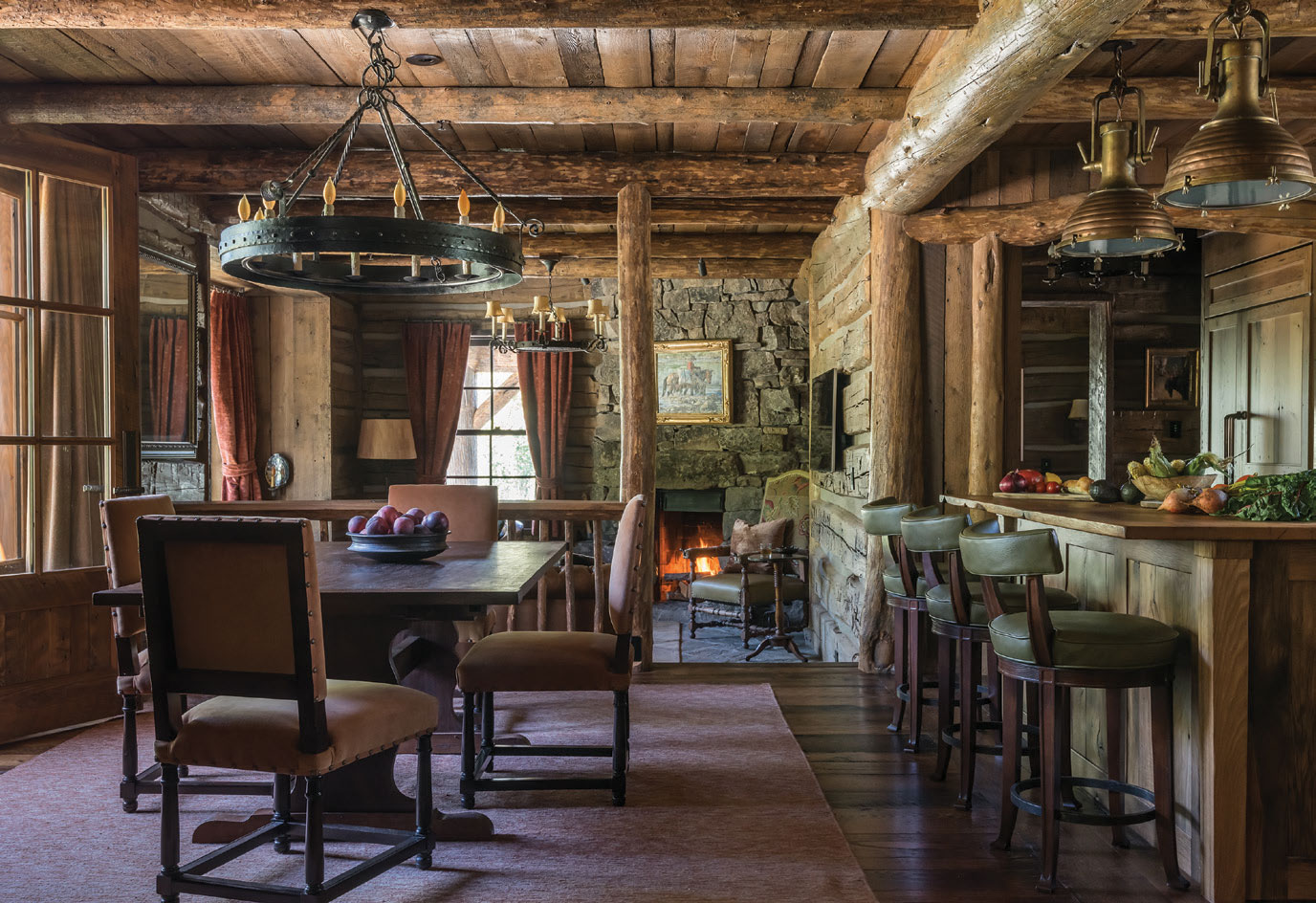 Peace Design created an interior that kept the art, architecture, and views as focal points.

While the cabin can be used for overflow guests, its main purpose is to act as a time-capsule-like retreat from the main house. This is entirely appropriate, as the main house is a handcrafted work — but on a much larger scale. Its most telling detail might be the lodgepole pine tree anchoring the spiral staircase. Tim Blazina of YT found the windblown tree on a friend’s property in Montana. He strapped it on a sledge, dragged it through the snow, trucked it to Jackson Hole, then had it lifted by crane through a section of the home’s roof that had been left open for that purpose. Once in place, the de-barked and finished tree — flared base and roots still intact — was integrated into the staircase treads and irregular stone-slab landing by YT site superintendent Charles Bunney and his team of master craftsmen. Extending the ethos of bringing nature indoors to its logical conclusion, the tree-trunk staircase is just one detail among many in a home which, from the macro to the micro, is all about suitedness to site. 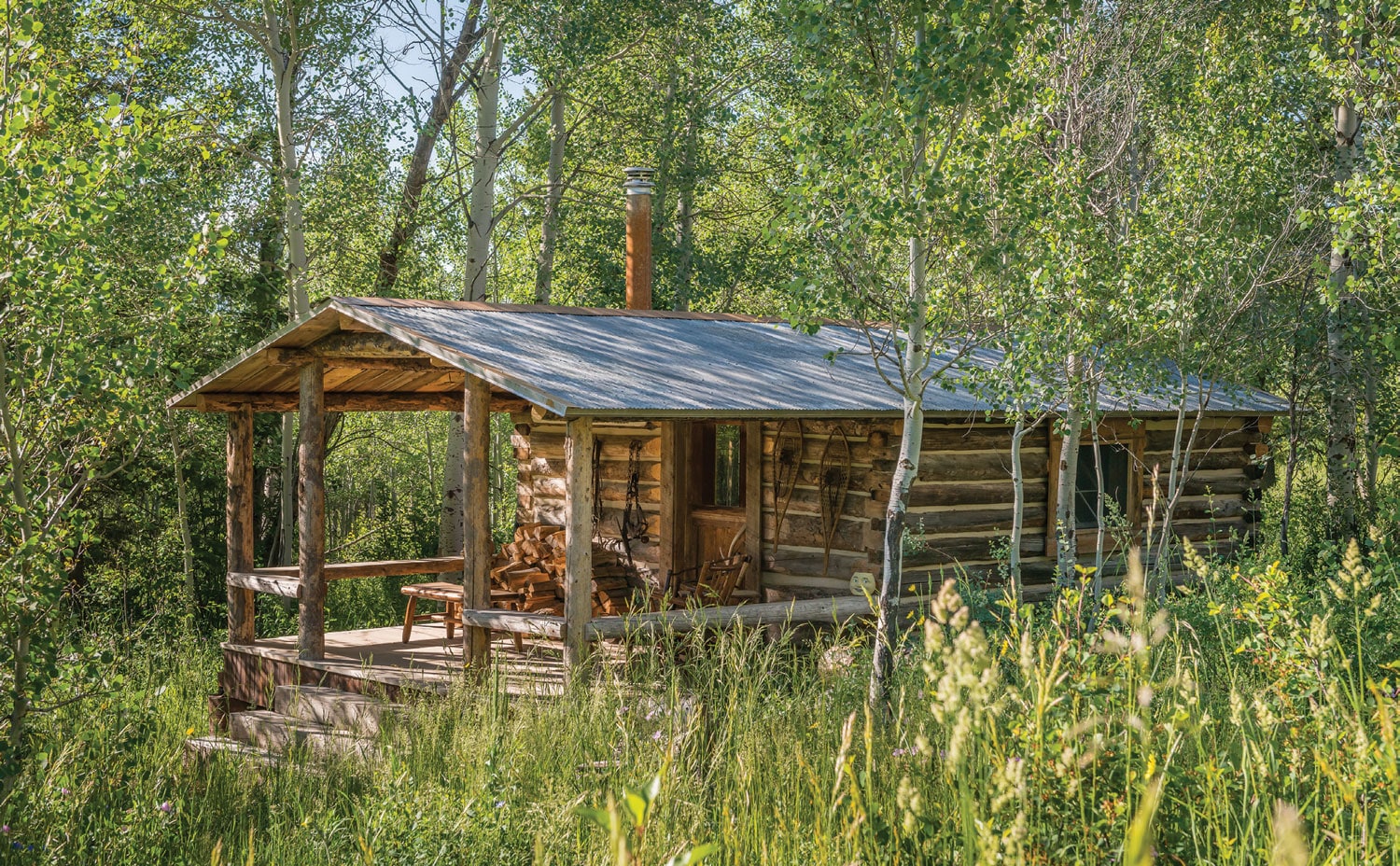 Architect Peter Zimmerman worked with YT, interior designer Bill Peace, and a host of artisans to create the timeless home. Situated on almost 20 acres surrounded by conservation land in Wilson, the site enjoys spectacular views through aspens and conifers, across protected ranch land, and to the Tetons and Sleeping Indian Mountain beyond.

Working within a proscribed building envelope, a height restriction, and a square-footage limitation of less than 4,500 square feet was no hardship for these owners, explains Zimmerman. “The house was designed at a scale that two people could be comfortable in, but it needed to be able to expand when the couple’s three daughters were there. The restrictions were fairly tight but really played into the idea of keeping the house intimate,” he says. The clients also wanted the site to be as undisturbed as possible, as if the home was placed in a meadow, naturally appearing in the woodlands. 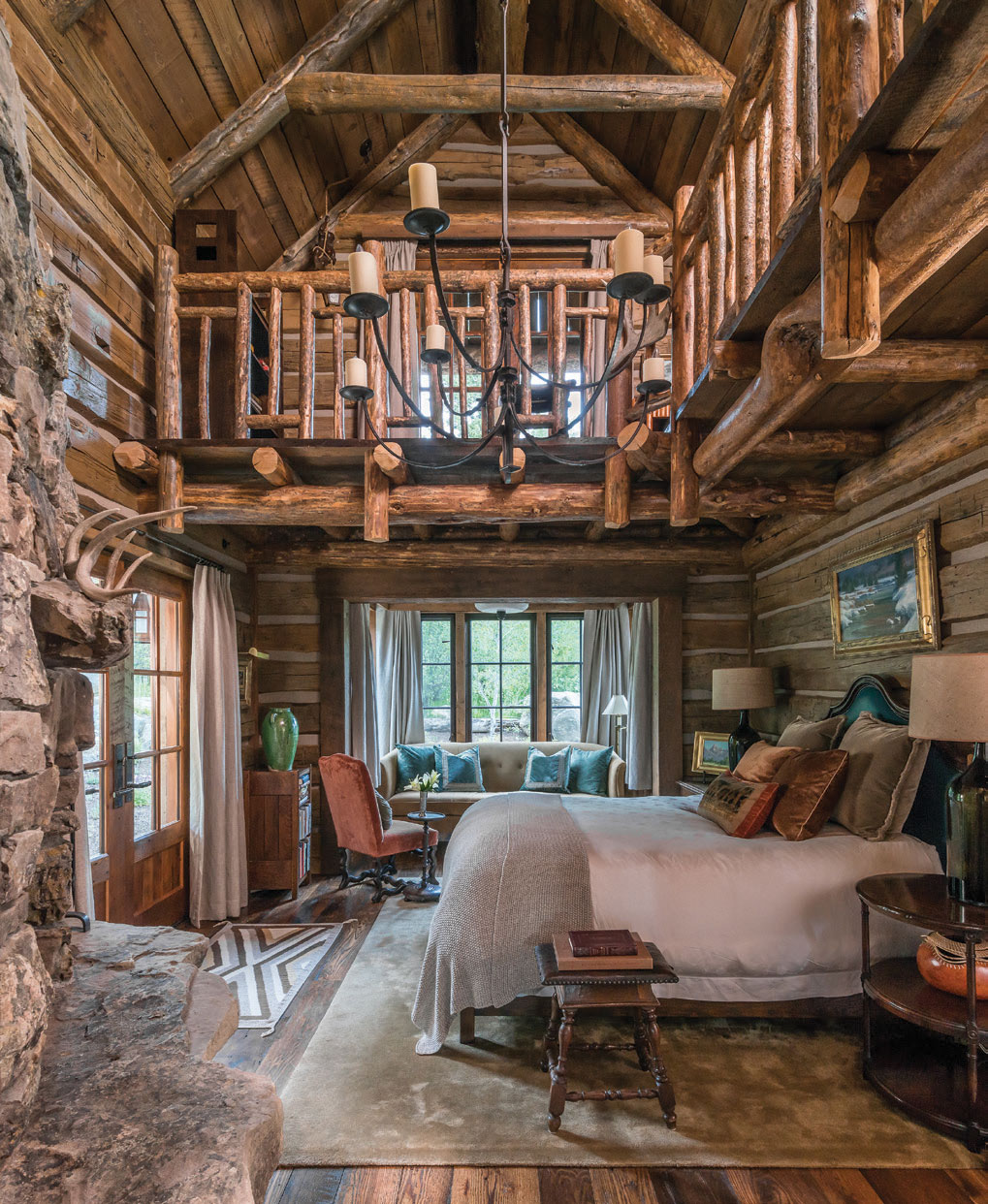 The lofted master bedroom has a custom handmade silk rug by Edward Fields and Tai Ping, and a Rose Tarlow chandelier.

Structurally, the home is essentially a one-story building with second-level bedrooms tucked under the sloped roof and its generous gabled dormers. The separate garage is connected by a covered walkway, which makes the massing feel smaller and allows for a dead-on view of Sleeping Indian Mountain through the breezeway as one approaches the house. Four bedrooms and a bunk room provide ample space for holiday gatherings of extended family, while an open kitchen with handcrafted details provides a highly efficient meal- and party-staging area, adjacent to the vaulted great room. 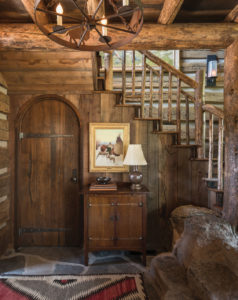 Upon entering the home, its handcrafted nature reveals itself in the monumen- tal base of the stone staircase. Traditional furnishings include Navajo rugs, an antique cabinet from Robuck & Co., and a 1914 painting titled Returning to Camp by Bill Gollings.

From the exterior, the structure employs repeated gabled forms, mimicking the topography of the mountains beyond. The tops of the fireplaces were given a crenelated sawtooth treatment, which speaks to the ruggedness of the surrounding peaks and boulders, and helps them blend into the landscape. Antique, salvaged, and re-sawn, hewn wood was chosen for the natural checking that occurs over time, while the roof of the outdoor living room is supported by tree trunk columns, their bark still visible.

Meadow-like landscaping and organic paths of subtly multicolored stone lead to a plunge pool and a hot tub fashioned to resemble an old wooden rain barrel; an irrigation stream was re-routed to further the immersive nature experience.

The inside of the home is equally handcrafted, from the walls to the artworks hanging on those walls. With an interior palette of reclaimed planks and stone rather than drywall, the rooms have a warm, textural environment, and provide the sense that the house was built from natural materials found on site. For that reason, square timbers were chosen over round logs, because the area’s homesteaders were more likely to hand-hew to a square shape. At the base of staircases, organically shaped rocks ground the home and convey the notion that they were built around, as if too heavy to move. In other areas, stone fireplaces protrude through walls to the next room to form a bookshelf, or the wall of a shower. 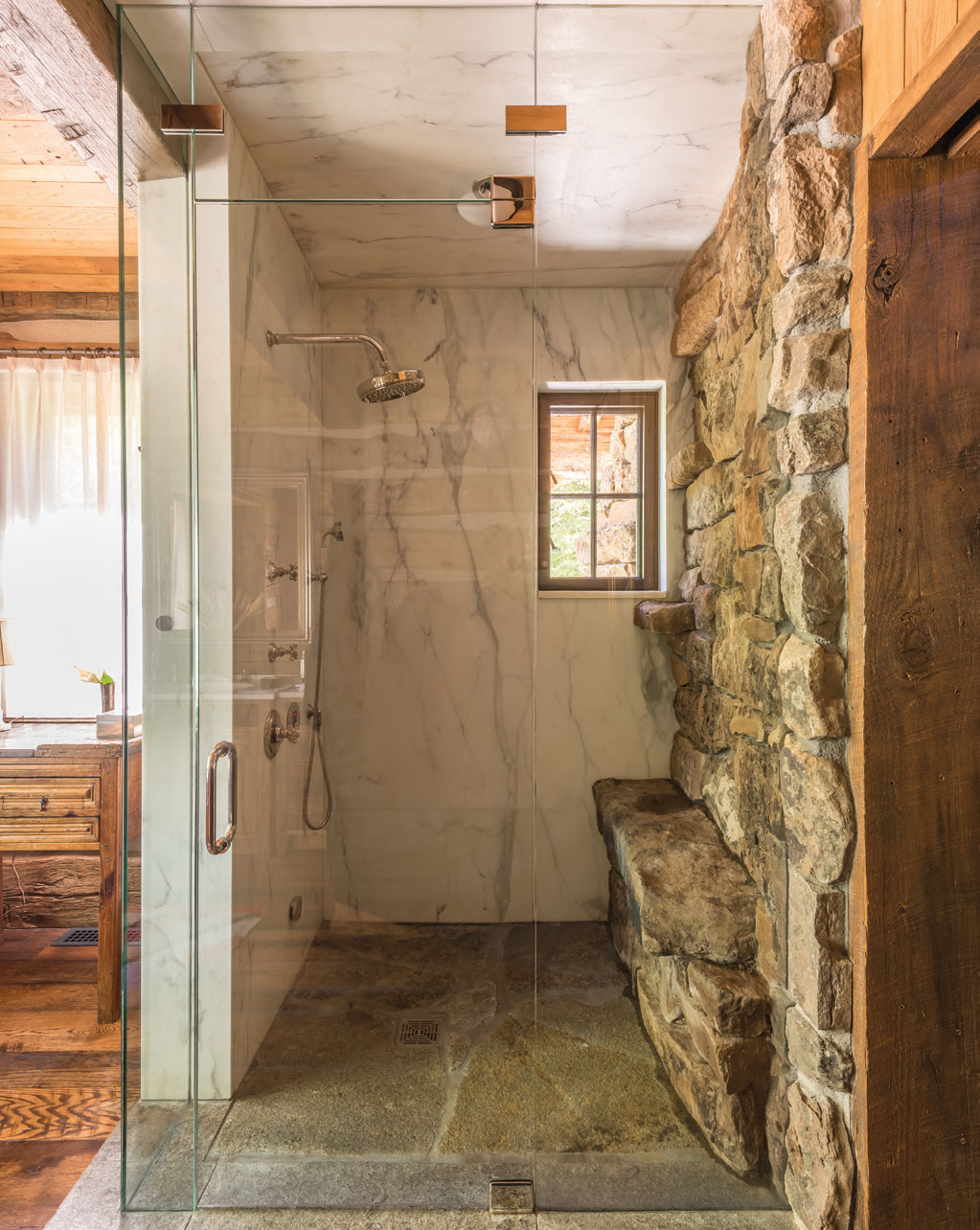 Upon entering the home, its handcrafted nature reveals itself in the monumen- tal base of the stone staircase. Traditional furnishings include Navajo rugs, an antique cabinet from Robuck & Co., and a 1914 painting titled Returning to Camp by Bill Gollings.

In furnishing the interiors, designer Bill Peace says, “Authenticity was very important to the clients. They wanted warmth, comfort, and coziness with a bit of an Old World-New World feel. Our goal was to make it feel collected over time.” European antiques reference the wife’s Irish heritage and mix comfortably with custom forged ironwork. Navajo rugs from the 1920s and 1930s and important Western artworks from the homeowners’ collection add interest and tie the home to place. The result, he says, is a house that’s textural rather than dark, and it feels like it’s been there forever. 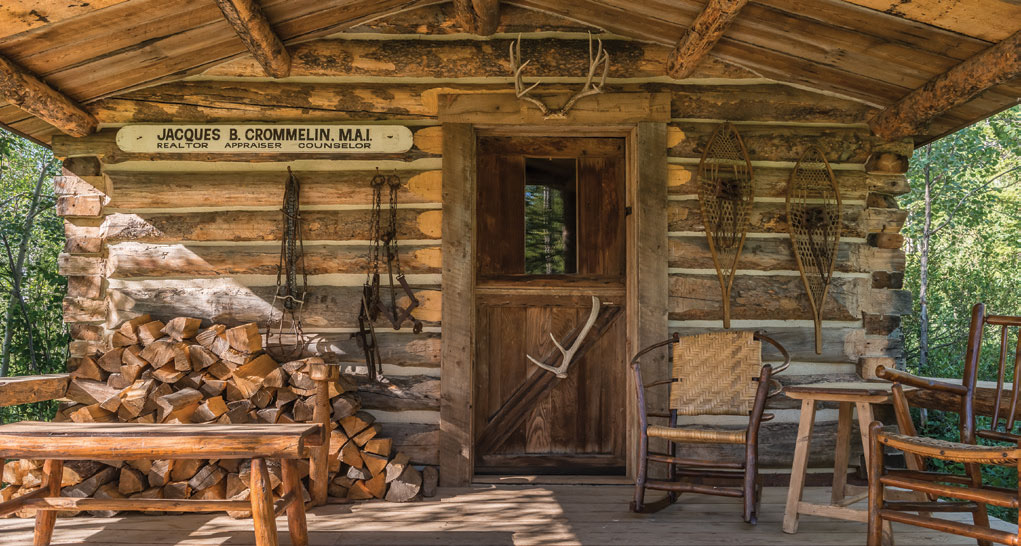 The original trapper’s cabin was given a new foundation and rebuilt in the place by Yellowstone Traditions. Then, it was furnished by Winchell of Fighting Bear Antiques in 1930s appropriate furniture, signage, horse gear, snowshoes, antlers, and art.

“We tried to create an environment almost as if we’d found an old homestead house, then renovated it, and added on,” explains Zimmerman. The project was about intimacy, scale, and grounding, and the result is a home that defers to its site in the shadow of the Tetons.