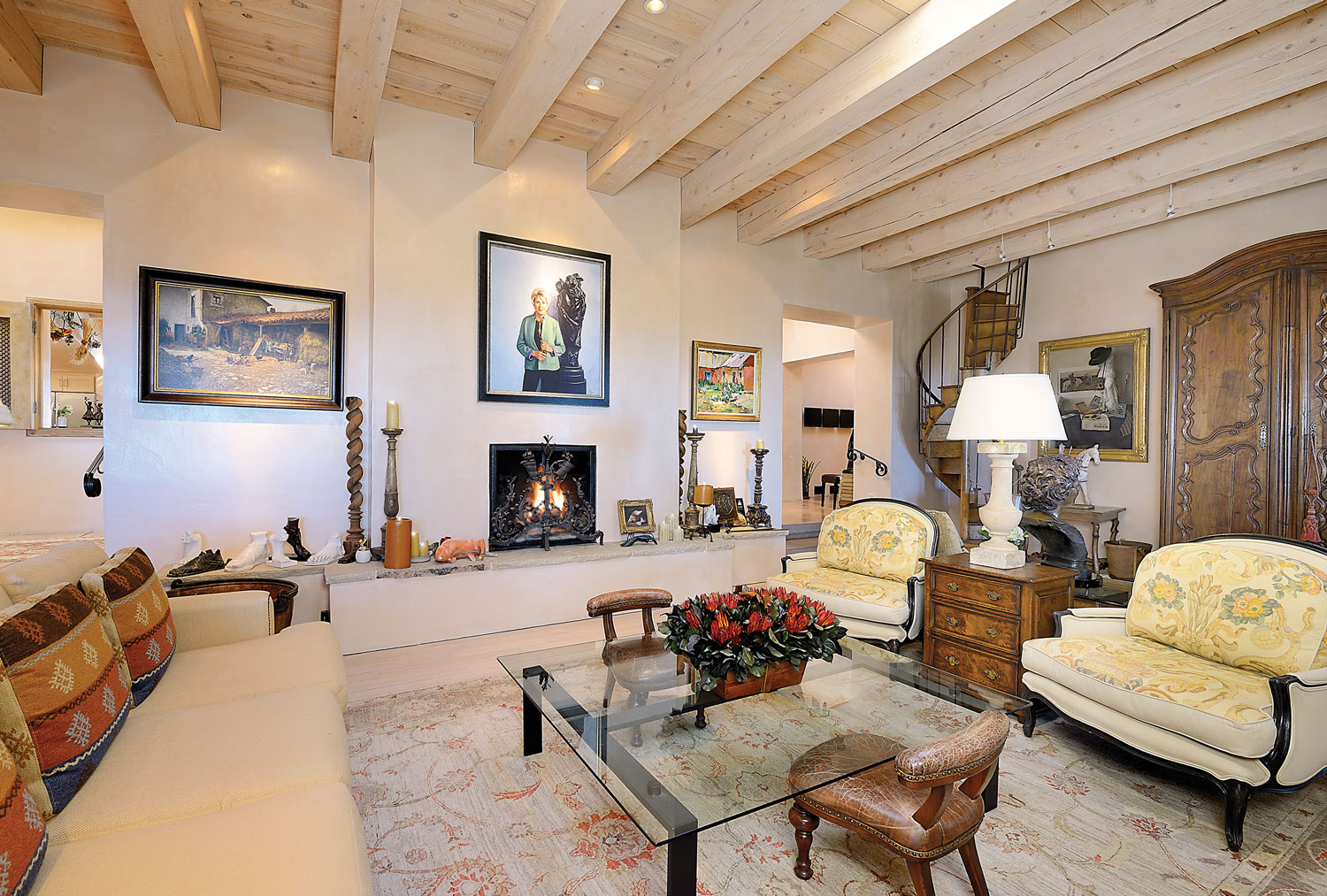 12 Mar At Home with Glenna Goodacre

STEPPING INSIDE THE HOME OF SCULPTOR GLENNA GOODACRE in Santa Fe, New Mexico, is like entering an art museum. It’s also like following “a roadmap of her long and illustrious career, that also traces her passion for collecting,” says her manager, Daniel R. Anthony. 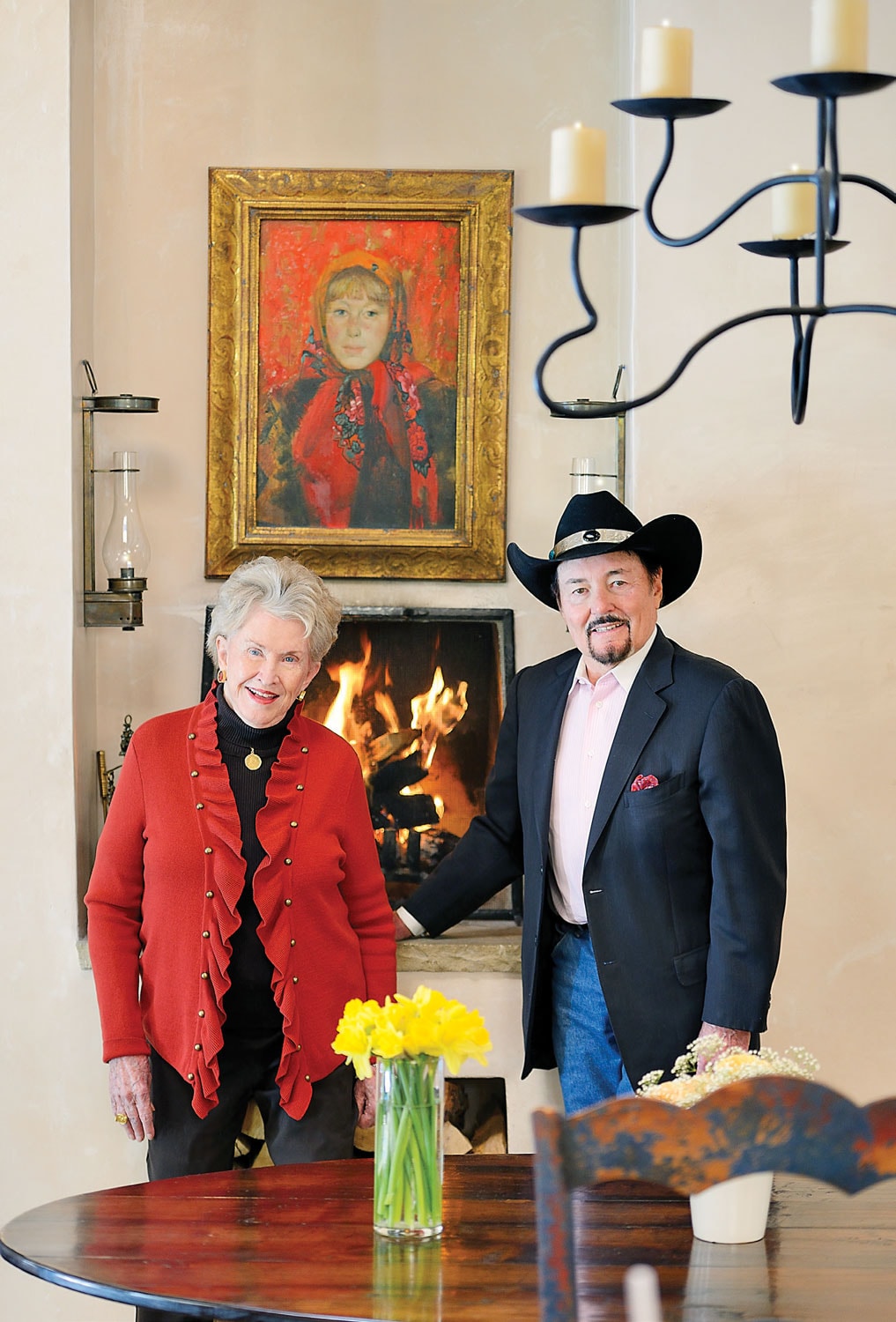 Goodacre with her husband, CL Mike Schmidt. A Russian academy painting hangs behind them over the fireplace.

No surprise, for Goodacre is one of America’s preeminent artists, best known for designing the Sacagawea dollar and monumental bronzes at the Vietnam Women’s Memorial in Washington, D.C., and the Irish Memorial in Philadelphia, Pennsylvania. 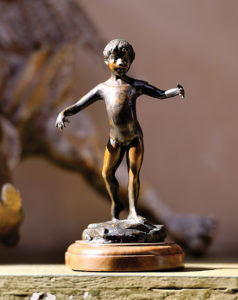 “Glenna’s house is full of wonderful things she has collected over the years. She has great taste and a discerning eye,” says Forrest Fenn, who cast Goodacre’s first bronze in 1969, when they both lived in Lubbock, Texas, and later represented her work in his Santa Fe gallery. This small, early sculpture of a ballerina (Goodacre’s daughter, Jill) is displayed in their home.

The one-and-a-half story home sits on 3.25 acres in the Sierra del Norte neighborhood, which spreads across the foothills of the Sangre de Cristo Mountains. The home’s previous owners were Nancy and William Zeckendorf Jr., the famed New-York-City-born real estate developer, who also developed Santa Fe’s Eldorado Hotel, Los Miradores condominium complex, and the Lensic Performing Arts Center. He started the upscale development in 1989. The project — 165 lots with buried utilities and covenants requiring houses to blend into the landscape to unobscure views — was completed in 1994. Goodacre and her family came along years later. 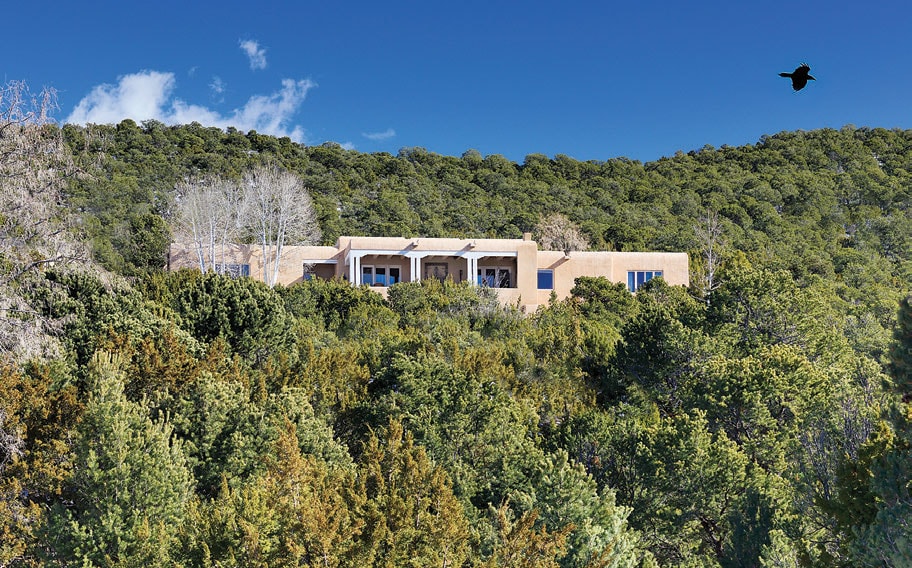 The home is snuggled among piñon- and juniper-covered hills in Santa Fe.

“Glenna had built a big studio in our previous house, which was really much more than we needed,” says her husband, attorney CL Mike Schmidt. After Goodacre and Schmidt sold their house, their realtors said they had found “the perfect place,” Schmidt recalls. “They knew Glenna’s taste.” 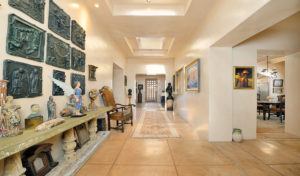 The entry is filled with art and antiques, including bronze bas-relief door panels on the left which were collected during one of Goodacre’s visits to Italy.

The adobe-style home offered three bedrooms, four-and-a-half baths, a downstairs studio, three fireplaces (including one on the porch), and stunning views. Goodacre and Schmidt bought the property in 2009.

The only problem? “The house was ultra modern,” Schmidt says, “but we converted it to Glenna’s good taste.” 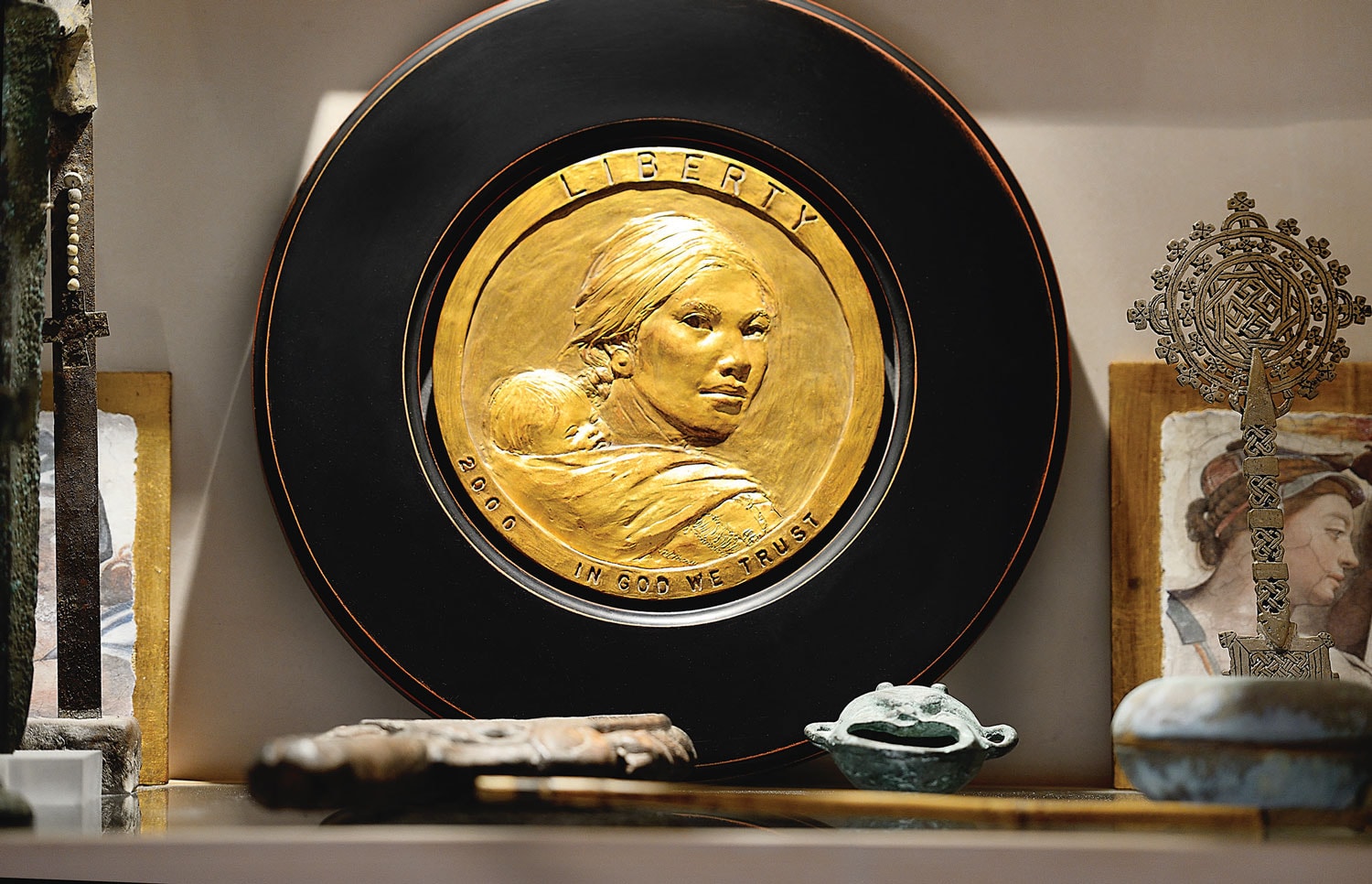 An 8-inch plaster study of the 2000 Sacagawea dollar which Goodacre designed.

“I have a big collection,” Goodacre says, smiling. 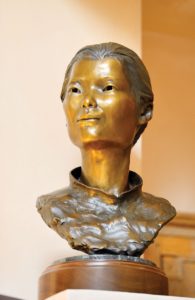 Goodacre’s Nina Koh is a bronze bust of a local woman. Goodacre’s work is represented by Nedra Matteucci Galleries in Santa Fe. 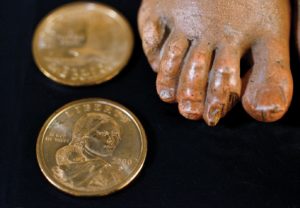 Finished Sacagawea dollars on a curio shelf with one of the many antique foot sculptures Goodacre has collected.

And, of course, many of the artist’s own creations bring character to the home. “I think I remember every sculpture and painting I’ve ever done,” Goodacre says, and the number of sculptures alone tops 500. Among the many works she’s created over the years, she says her favorite piece is the Vietnam Women’s Memorial. “I think I’m proudest of that,” she says.

Goodacre also collects artwork from her world travels, specifically Russian and Chinese art academy paintings, and sculptures of hands and feet. In addition, the artist has made a habit of collecting antique doors from places she’s visited, and then designing a studio or home around those doors. Although, in this home, she didn’t have to swap out a single one. “They’re all Nancy’s doors,” she says, noting the beauty of the originals. 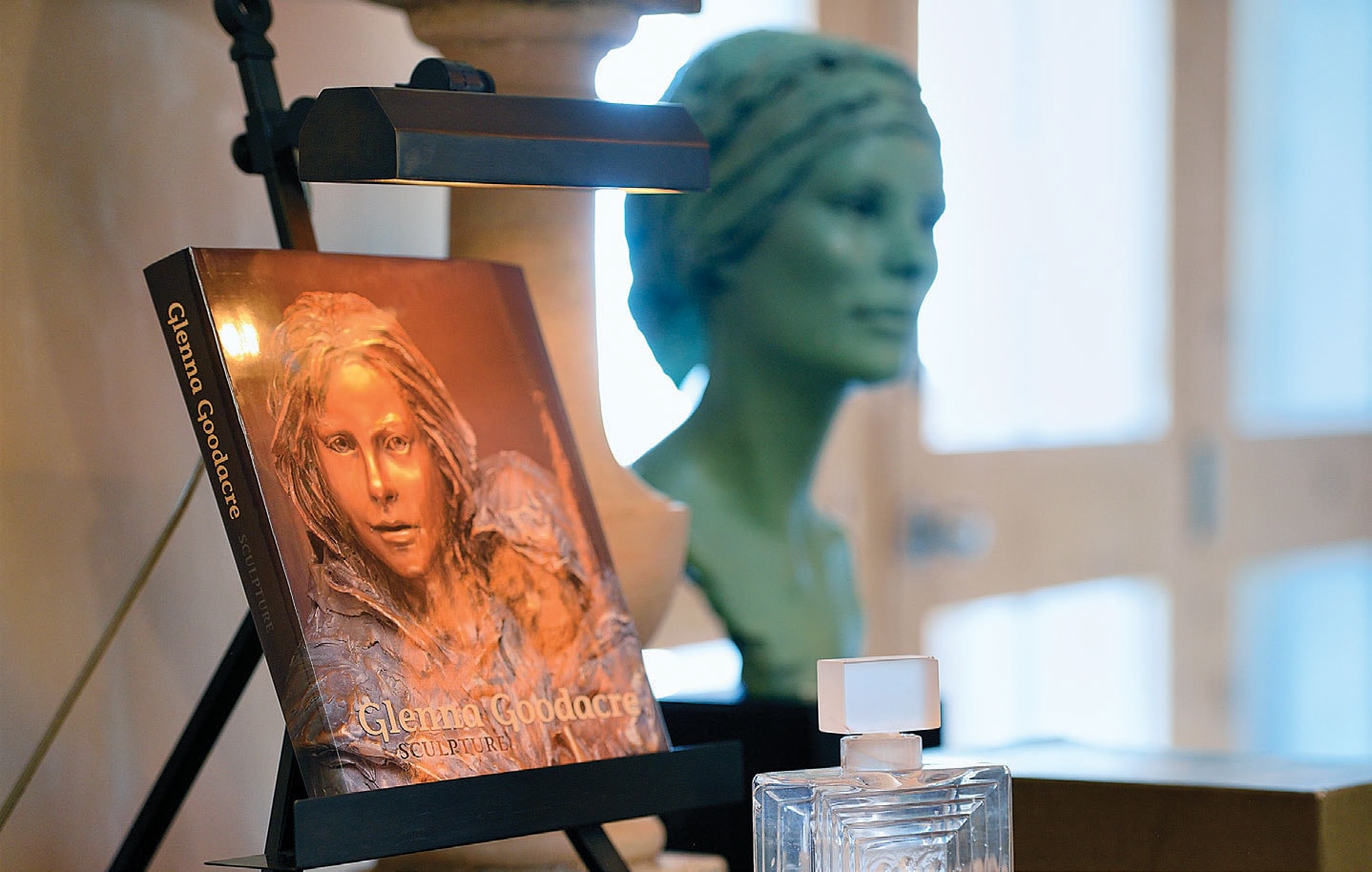 A 2009 book com- memorating Goodacre’s 40 years as a sculptor and a 1987 plaster head from the artist’s collection, Girl With Scarf, rest on a living room end table.

Goodacre, who suffered a brain hemorrhage in 2007, retired as an artist in 2016, donating her sculpting tools, clay, and equipment to the New Mexico School for the Arts, a public high school based in Santa Fe. A broken hip has also slowed her down. “Physical inabilities do cramp your style,” she says. 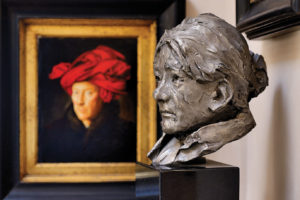 An antique Dutch painting hangs behind the entry with Ella, a silver-patinaed bronze head from the Philadelphia Irish Memorial. 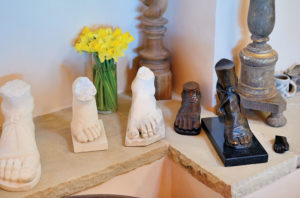 On the hearth, marble, plaster, and wooden foot sculptures collected by Goodacre rest beside two bronze sculptures created by the artist.

She spends most of her days reading newspapers and books — currently a biography of Michelangelo. “I love putting myself in his place,” she says. She once sculpted a nude figure out of marble that came from the same quarries Michelangelo used in the 1500s. And while she calls her bedroom her favorite room in the house, she spends a lot of time in the dining area next to the spacious kitchen, also known as the “Scrabble Headquarters.” 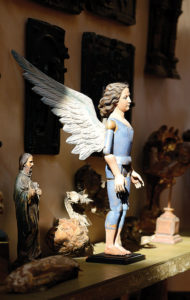 Saints and angels, including a large sculpture of St. Michael carved by a contemporary Hispanic santero, stand guard on a side table in the entry hallway. 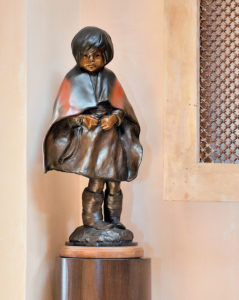 “She’s ruthless,” Anthony says with a grin. “I do play lots of Scrabble,” Goodacre adds.

At age 79, the house is a perfect place for Goodacre to reflect on a long, rewarding career… like the professor at Colorado College who gave her a D in sculpting. “He didn’t like me, and I didn’t like him … but I recovered,” she says. Her payback came when she titled her 1994 commencement address at the college, “Success is the Greatest Revenge.”

Although retired, her sculptures and paintings are highly sought after on the secondary market, and many can be found at Nedra Matteucci Galleries, the Santa Fe compound that Fenn started in 1972 and sold to Matteucci in 1988.

Bather, a life-sized bronze from the artist’s collection, sits next to a water feature in the stone- terraced garden on homte’s east side. 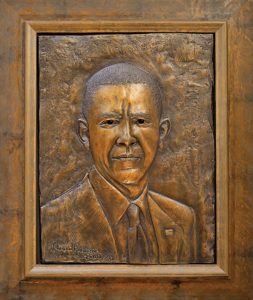 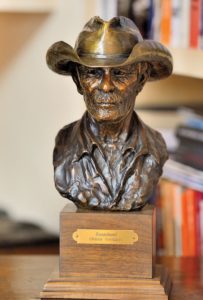 An image of Rangehand, Goodacre’s 2006 study of a weathered cowboy friend, courtesy of Nedra Matteucci Galleries.

Goodacre and Schmidt love the home’s views, its light, its roominess, and how carefully the Zeckendorfs planned it.

“We didn’t build this house,” Goodacre says, “but we will always love it.”