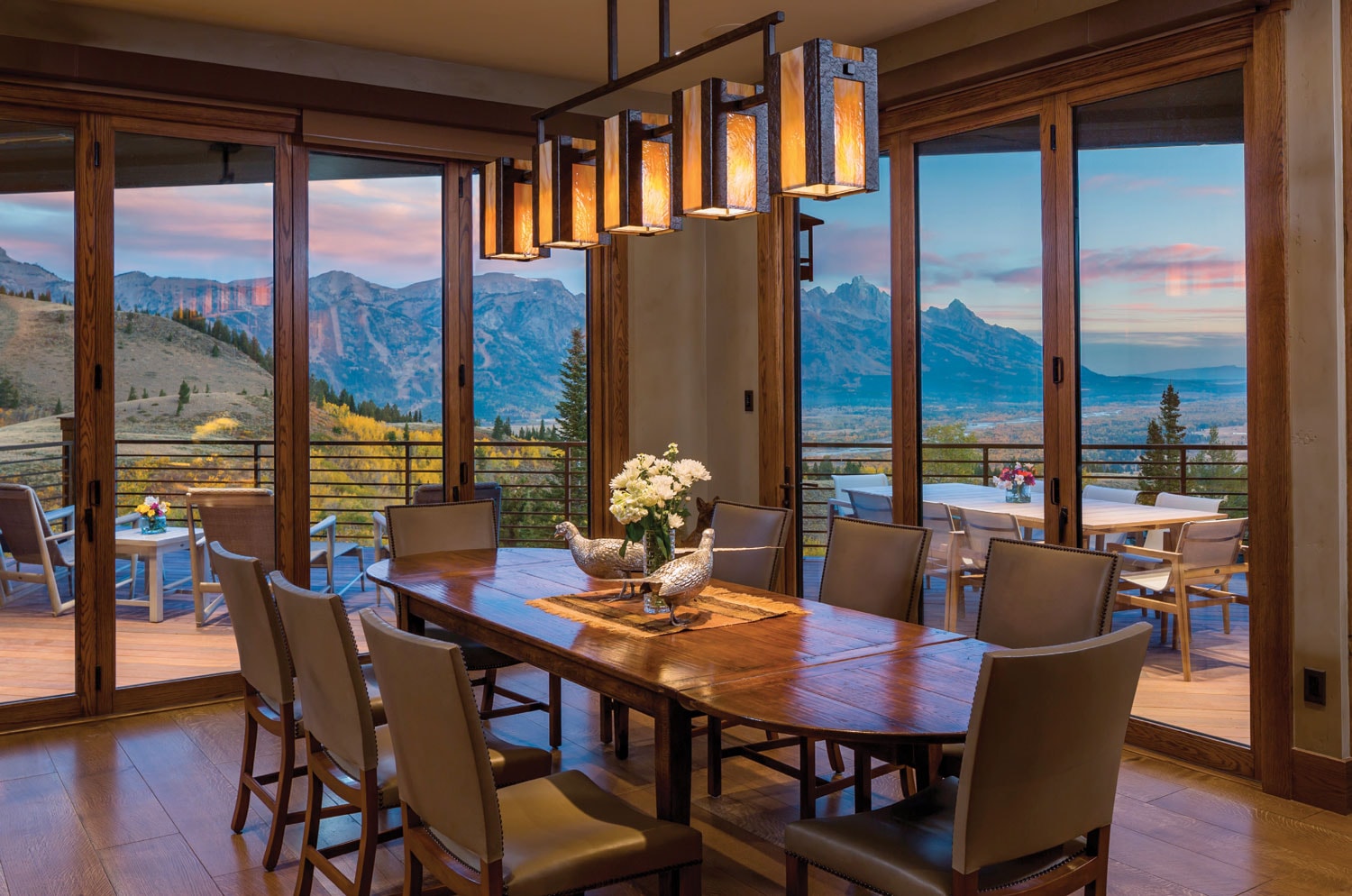 With lines that reference the room’s vertical windows, a custom Hammerton chandelier of hammered steel and artisan kiln-fused glass casts a warm glow in a Jackson Hole, Wyoming, home.

07 Mar Designing the West: The Art of Lighting

Fresh out of college, Levi Wilson decided to drive up the West Coast in his van. The trip would be a chance to unwind and see some sights before he settled down to adult life. 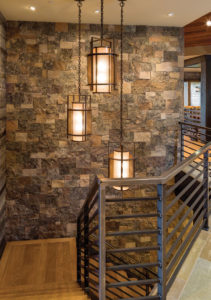 A Craftsman-inspired chandelier of finely woven mesh and mica hangs in the home’s stairwell. 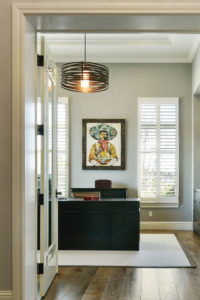 A drum fixture from the Hammerton Studio Tempest collection is handcrafted in layered bands of 12-gauge steel.

He had grown up around his dad’s ornamental iron fabrication shop, so when he pulled up to the historic Timberline Lodge in Mount Hood, Oregon, his eye was naturally drawn to the retreat’s hand-forged metalwork. He had already traveled extensively around Europe while studying architecture and ornamental ironwork in college, photographing metalwork details in countries like the Czech Republic, Austria, France, and Germany. But the ironwork he saw when he pulled the van off the road in Oregon was decidedly different.

“The Timberline Lodge was built in 1937, during the Depression era,” he says. “The craftsmen didn’t have extensive equipment or expertise, so their designs were more rustic. I really enjoyed seeing the contrast between the American Old West aesthetic verses the more elegant European style.” 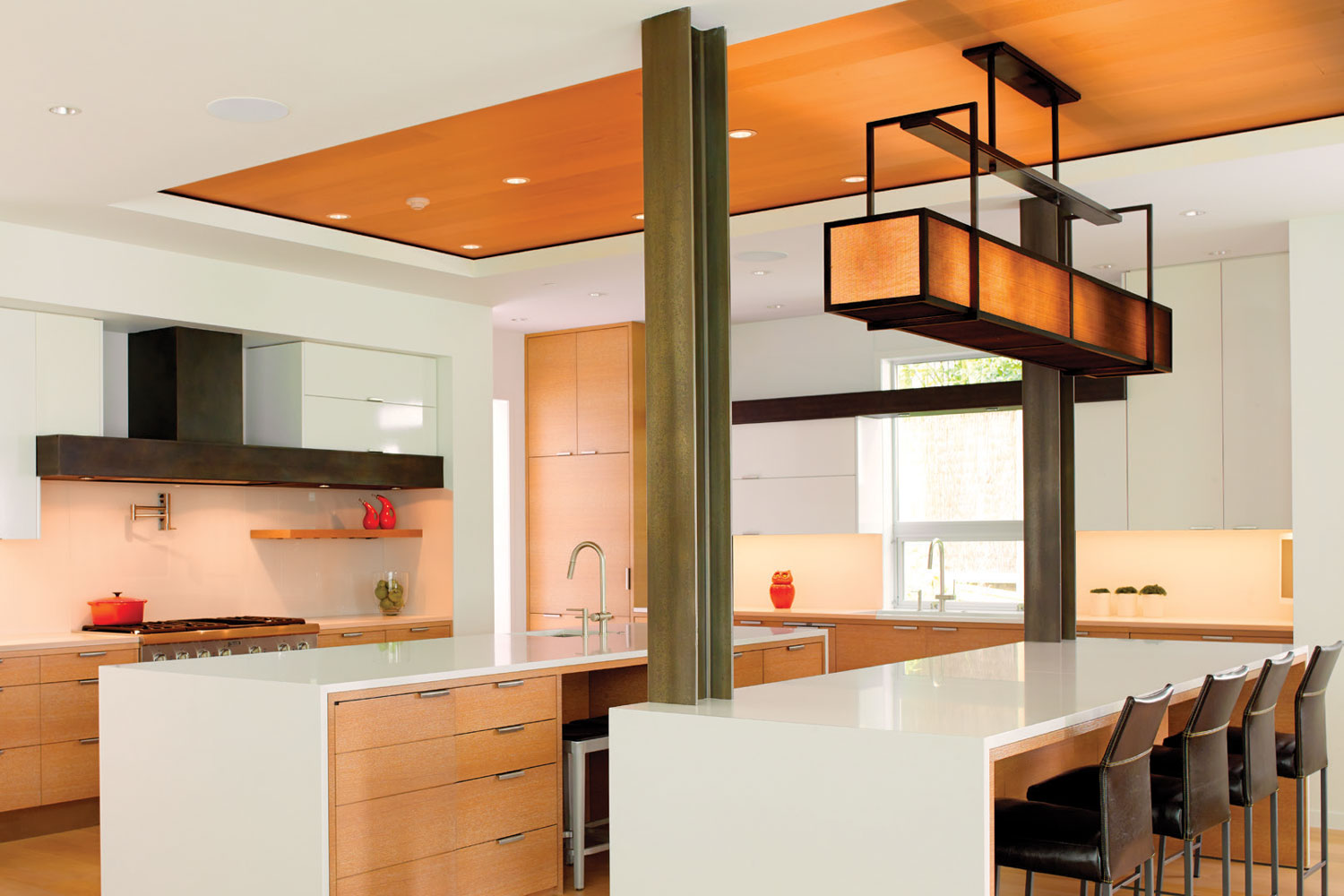 Little did he know that these visits would have a lasting impact on his future career as the founder and vice president of design at Hammerton, a lighting manufacturing company. 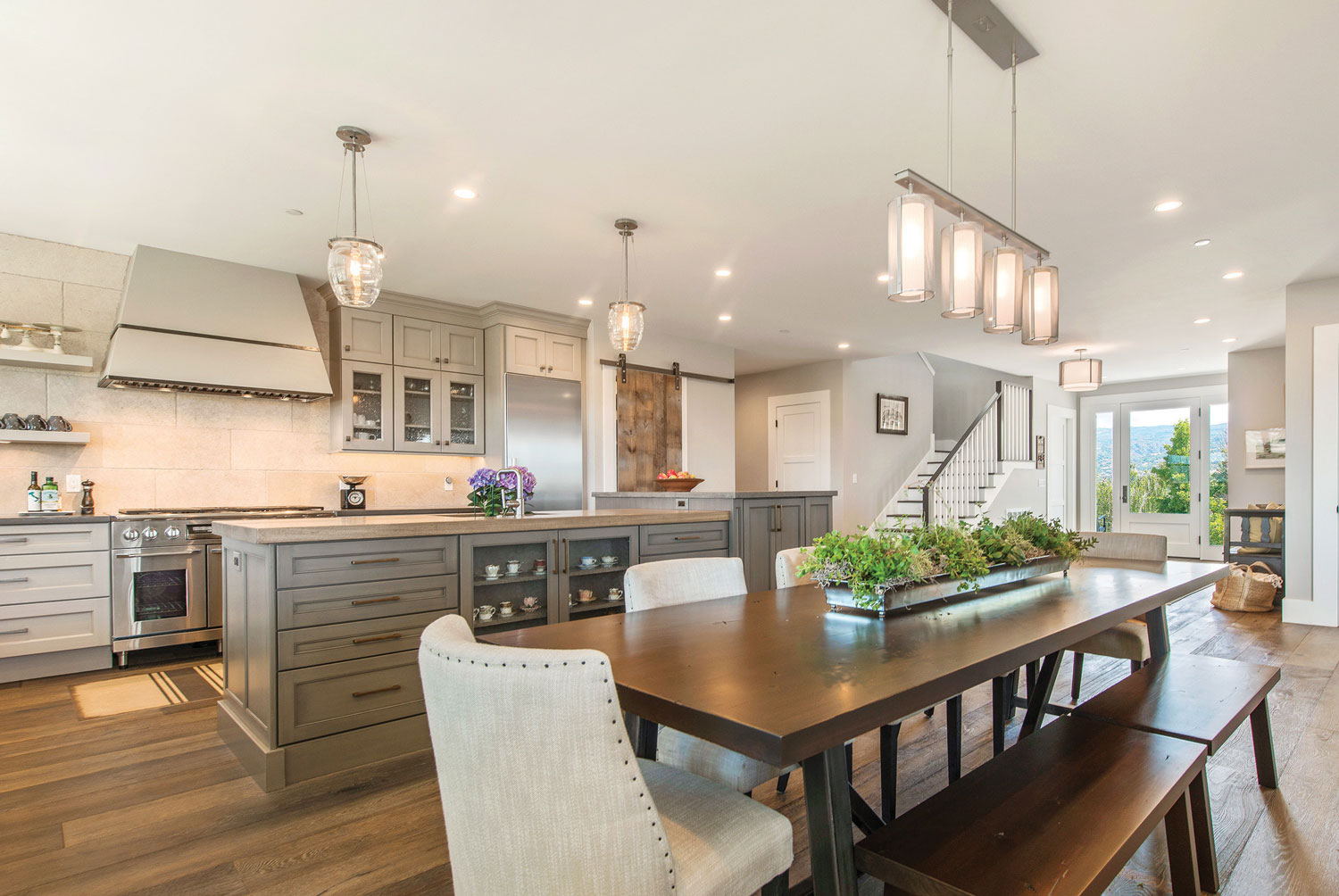 A drum fixture from the Hammerton Studio Tempest collection is handcrafted in layered bands of 12-gauge steel.

After returning to Utah, Wilson joined his friend’s fledgling business, fabricating custom car bumpersand SUV roof racks out of a garage. “Six months in, we realized it was a terrible business model,” Wilson says. “The potential for liability was constant, and every car was different, so we couldn’t scale any of the designs.” 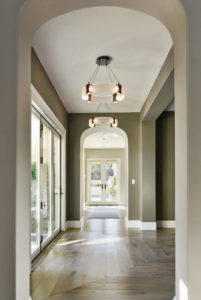 Decorative fixtures in blown glass and fine mesh add textural interest to the great room of a modern farmhouse in Northern California.

Some of their clients began asking for more specific items, like wrought iron railings and fireplace screens, so, in 1995, Wilson and his partner at the time created a small catalog of accessories and named the company Mountain Moose Design.

When interior designers began requesting rustic, hand-forged fixtures to embellish the log homes being built in the mountains around Salt Lake City, Wilson pulled out his images from Europe and Mount Hood and started designing. He later renamed the company Hammerton. “The hammer is the common tool that every craftsman uses, and it speaks to the heritage of metalworking,” he explains.

A number of significant design trends emerged after Wilson started his business in the mountain resort market. “A European influence brought a shift to more stonework in high country homes, so we developed our Chateau line,” he says. “Then, we saw a renewed interest in the Arts and Crafts style and created our Craftsman collection. Around 2000, we started seeing more of a contemporary influence and began selling more of our modern designs in urban areas.” 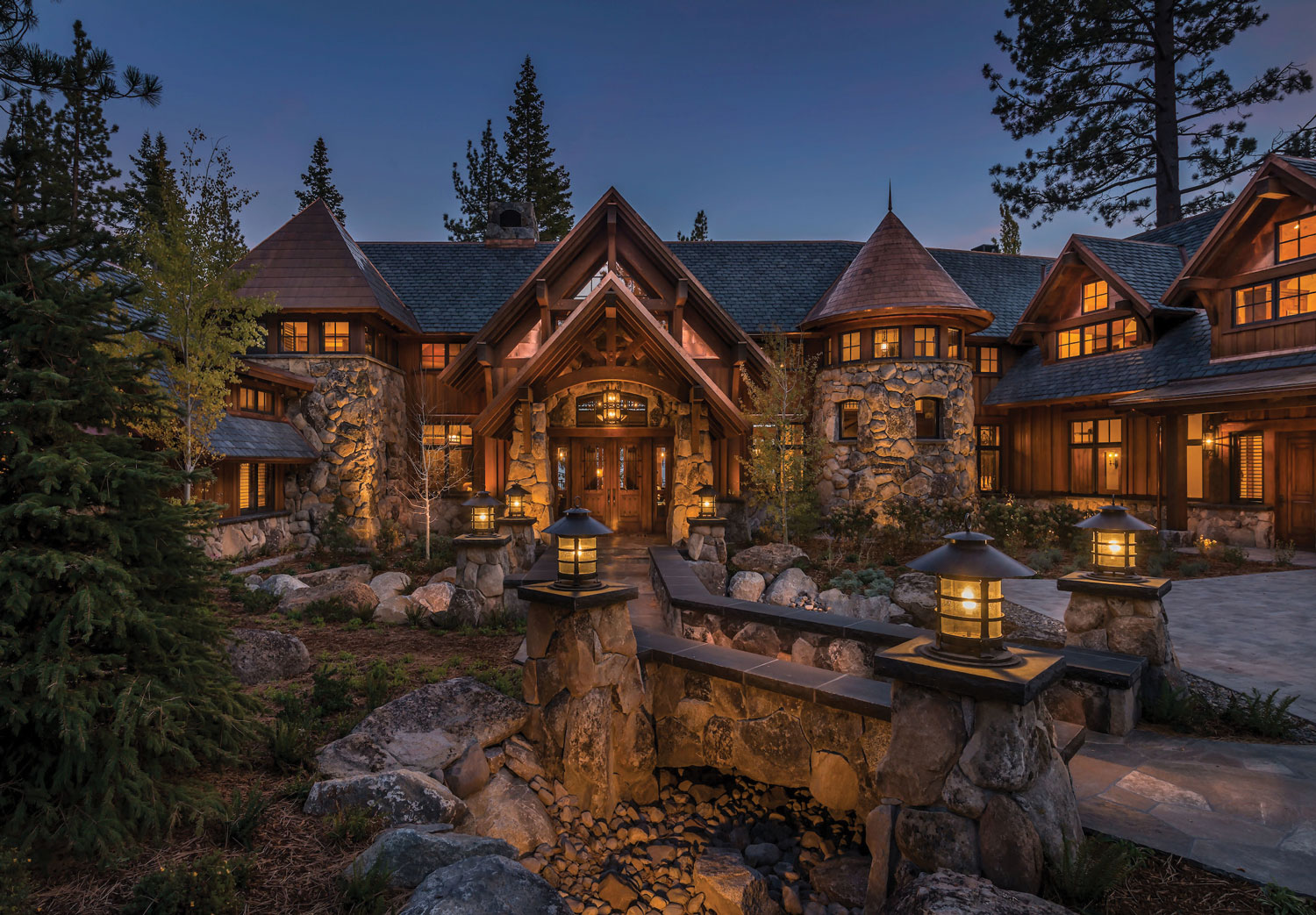 As the business grew, Wilson’s role expanded. “I wore every hat in the early years, and sometimes found myself being both a fabricator and janitor in the same day,” he says. “What I really longed to do was spend more of my time designing and strategizing.” 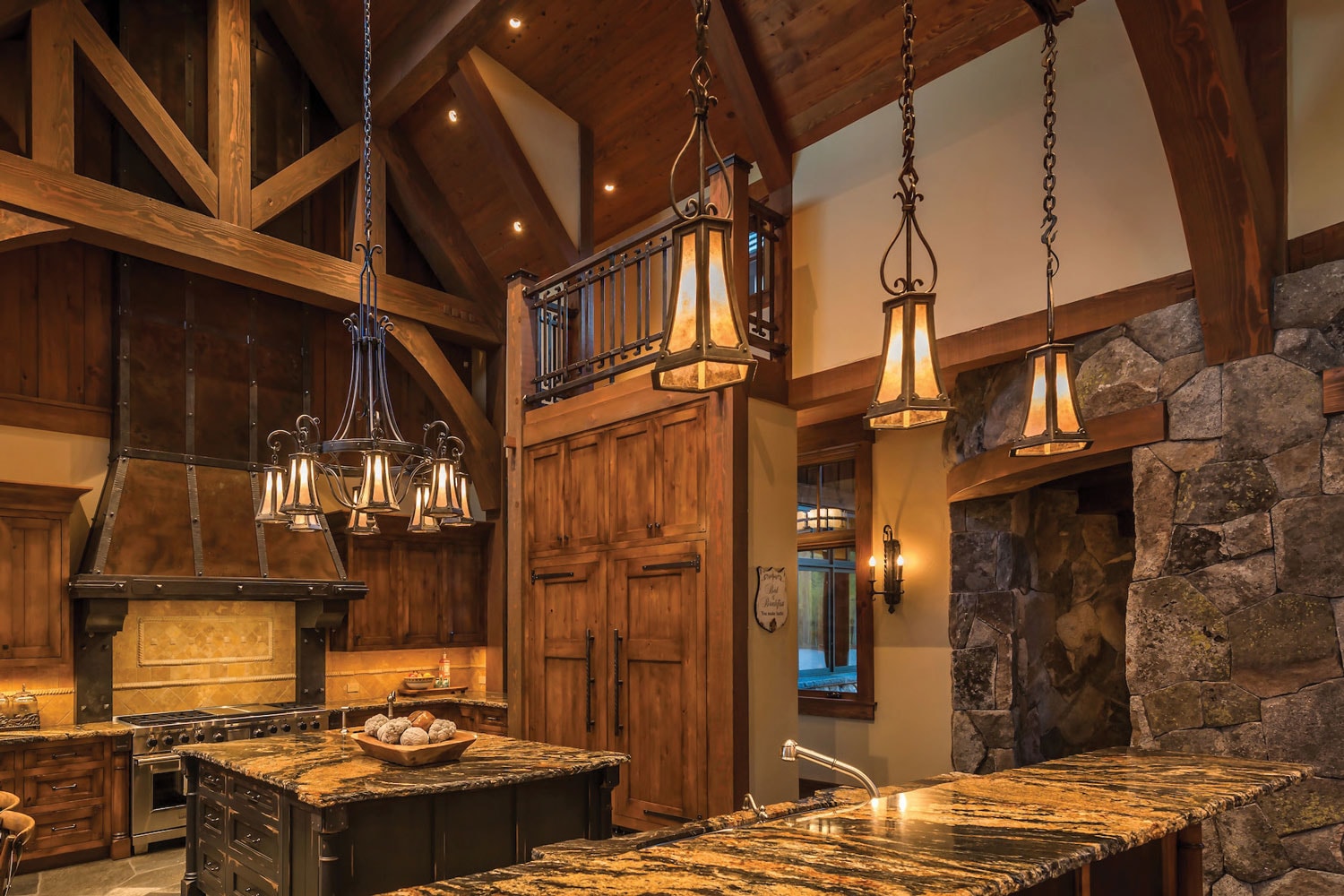 A chandelier lights the kitchen island, and a trio of lighting pendants over the breakfast bar feature blackened steel and mica light diffusers.

Meanwhile, a seasoned Silicon Valley executive named Bill Shott was looking for a new opportunity. After 25 years in the tech industry, founding and managing two venture-backed software companies, Shott wanted to invest in a U.S.-based manufacturing company. “I build furniture in my spare time and have my own woodshop at home, so a company in the home furnishings industry was especially appealing to me,” he says. “When I met with Levi, Hammerton felt like a natural fit.” 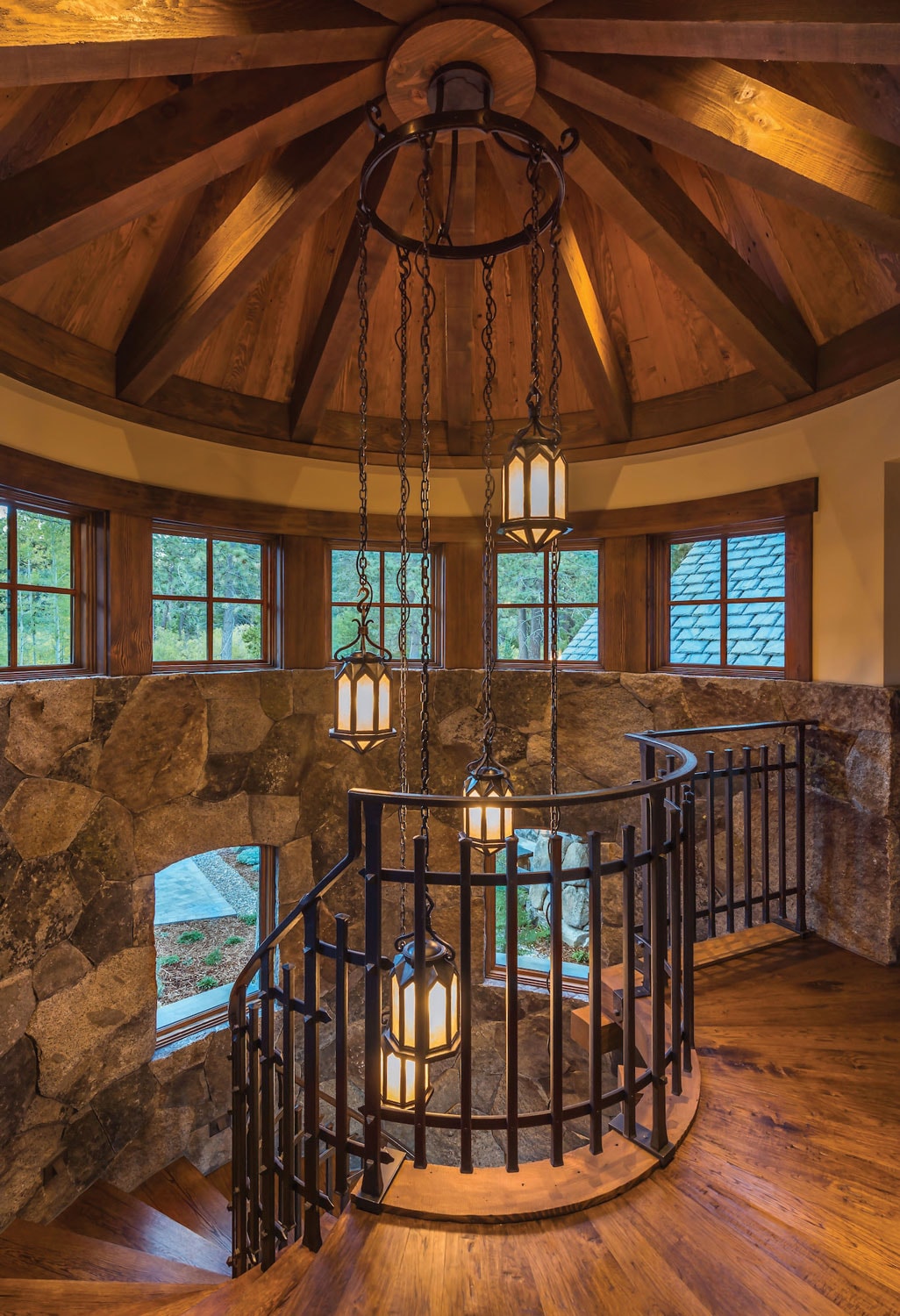 A blackened steel chandelier with frosted glass shades of varying heights creates an artistic statement in the home’s stairwell.

Shott became Hammerton’s president in 2005, providing the business expertise to grow the company so that Wilson could focus on design. Today, Hammerton has more than 100 employees working out of a 50,000-square-foot manufacturing facility in Salt Lake City. “We’re all under one roof, and I’m out in the shop daily,” Shott says. “I know the names of all the employees and appreciate their abilities and everything they do. We’re also in direct touch with our customers through our inside sales force, so we stay very close to the market.” 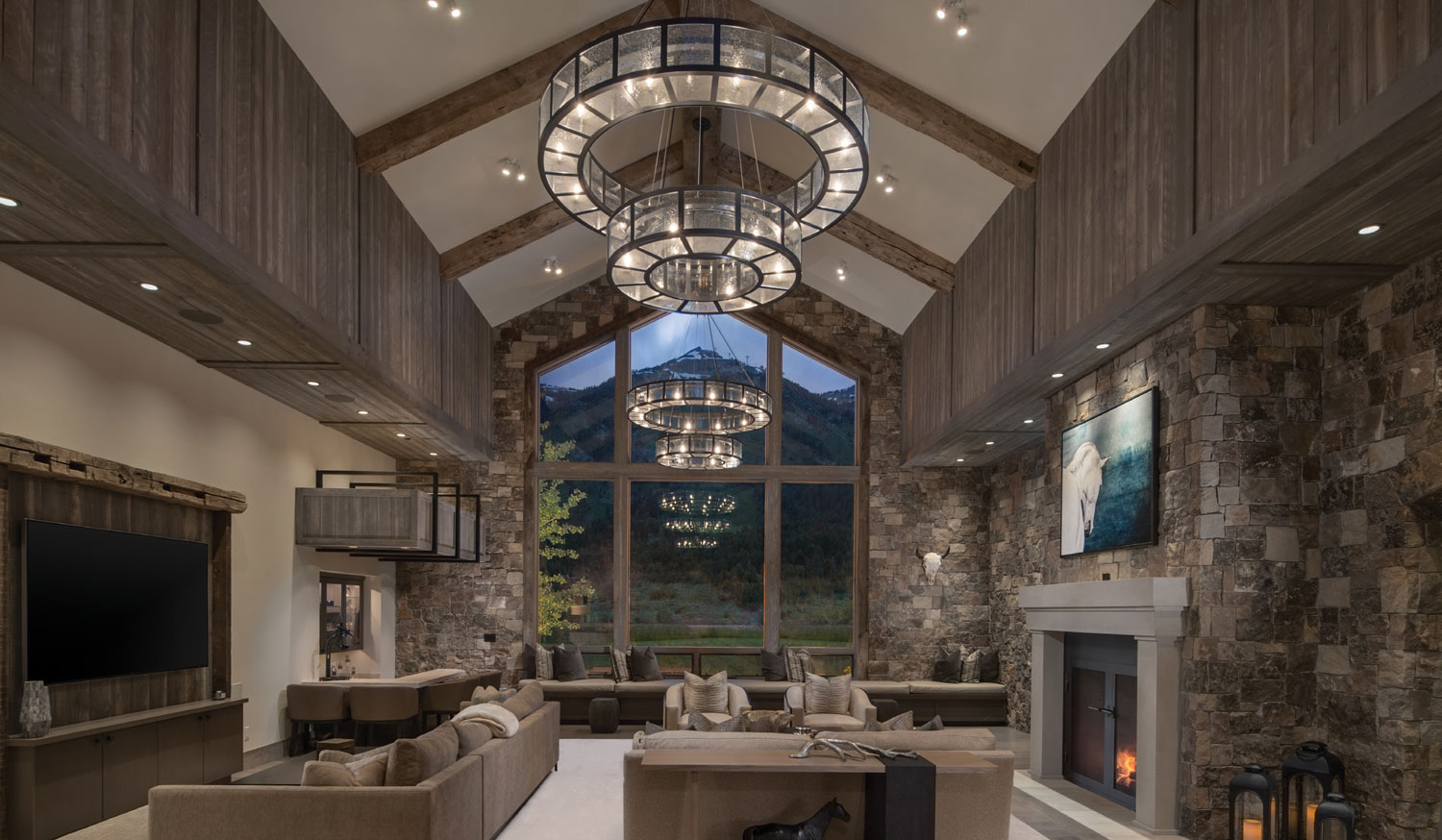 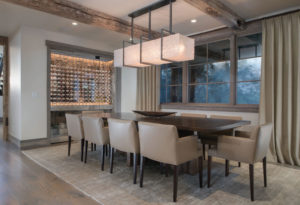 The bold dining chandelier in kiln-fused glass was custom-designed exclusively for this project.

Every Tuesday, the design team has a product development meeting. “One of the key things that is different about Hammerton from a lot of other companies is we are more of a design company that happens to manufacture lighting,” Shott says. “We don’t outsource design; it’s an evolutionary organic process that’s the result of our team meetings. We’re constantly innovating and conceptualizing new products and developing prototypes.” 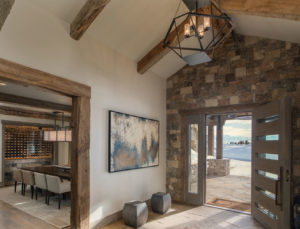 Just inside the entry, a fixture from Hammerton’s Fusion collection features blown glass cylinders enclosed by a geometric cage in a bronze finish.

The company’s individual collections feature handcrafted fixtures like chandeliers, pendants, sconces, flush mounts, and outdoor lighting, along with such home accessories as mirrors and fireplace screens. Hammerton is the company’s luxury, made-to-order custom line, sold primarily through high-end residential designers. And Hammerton Studio offers a more affordable price point and is sold mainly through lighting showrooms. “Many of our Hammerton Studio designs, including all of our glass designs, were inspired by custom Hammerton work we’ve done for leading interior designers over the years,” Shott says. 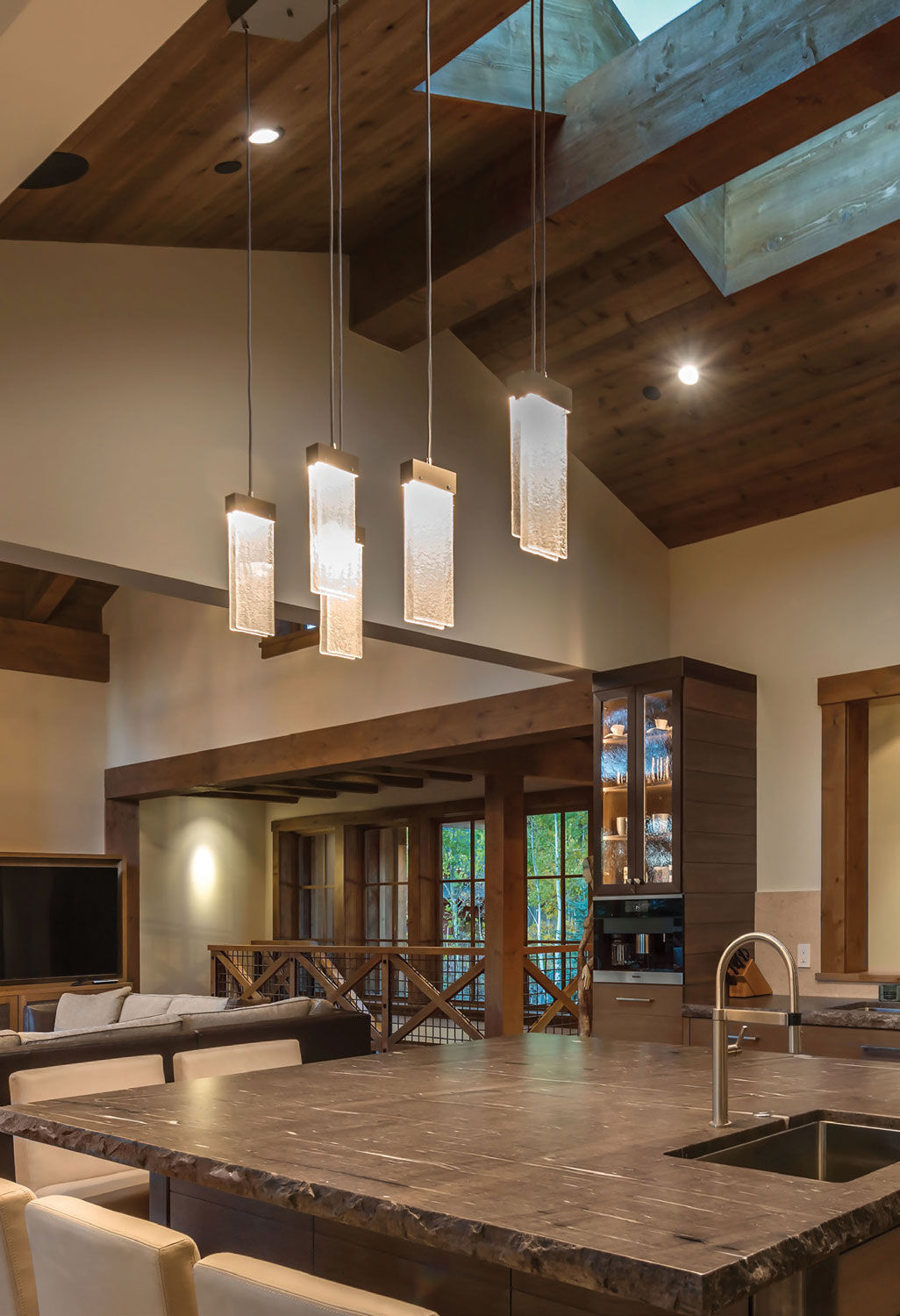 Suspended from the vaulted ceiling of a Northern California home, the Parallel Multi-Port Chandelier, with kiln-fused glass, illuminates a large kitchen island.

As design styles have moved in a more modern direction, lighting materials and bulbs have also changed and evolved. “The integrated LED has revolutionized the lighting industry,” Wilson says. “The technology has allowed designers to develop exciting new forms and different ways to illuminate shapes.”

Wilson has come a long way from the days of road tripping in his van, but he still feels a thrill when something sparks his imagination. “I get to work with some of the best interior designers in the entire country,” Wilson says. “They are always challenging me to come up with new and creative ways of doing something different.” 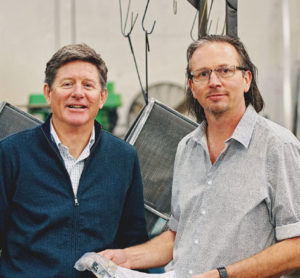 If possible, examine the fixture in person. The materials should feel solid in weight and thickness, and they should be utilized in proportion to the style and size of the fixture.

How does the piece look when you get close to it? Examine the welds and how the seams are finished; the metal should look like one continuous piece instead of two sections joined together.

A bespoke fixture allows you to have a one-of-a-kind piece designed and fabricated to your exact specifications of size, glass, finish, and style.

Look for sculptural designs with clean lines and a

timeless aesthetic that won’t go out of style.

The ultimate definition of quality is that something is made so well that it lasts a lifetime and beyond. It’s designed and built in such a way that people want to keep it or pass it on to the next generation.