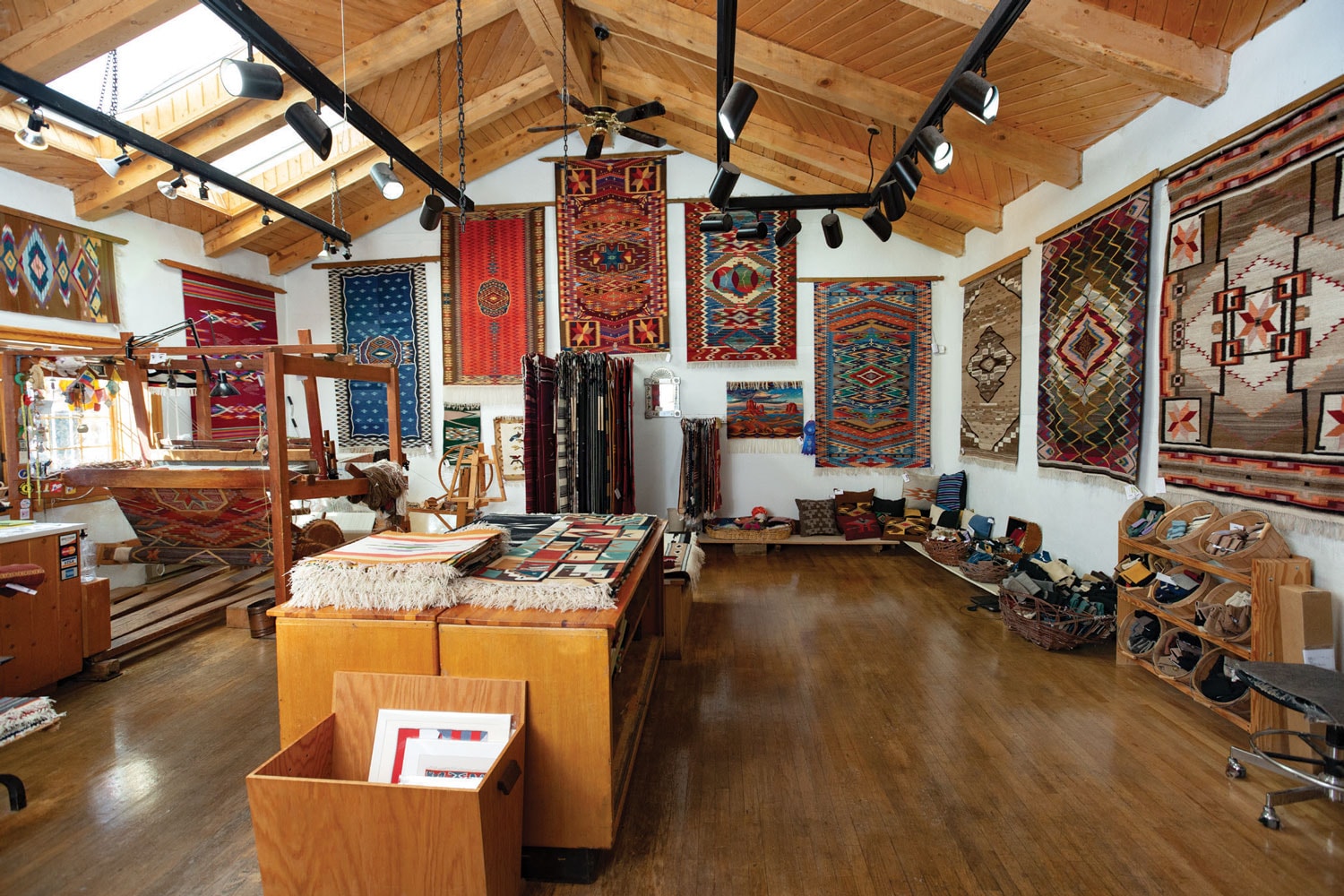 The main gallery at Centinela Traditional Arts displays a myriad of woven designs, sizes, and colors in a Northern New Mexico-style building.

Posted at 20:45h in April | May 2019 | In the Studio | Written by John Goekler | Photography by Robin Zielinski 0 Comments
Share

For Irvin and Lisa Trujillo of Centinela Traditional Arts, weaving is not only an art form and livelihood, it’s also a celebration of the landscapes and lifestyles of their historic community of Chimayo, New Mexico. “I’ve always loved the land,” Irvin says. “And I’m a seventh-generation weaver. So, we’re carrying on the tradition, but in a dynamic way.” 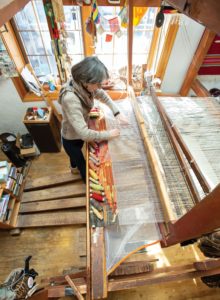 Lisa Trujillo works the “walking loom,” hand-built by her father-in- law Jake Trujillo in the 1920s. The foot operated “treadles” impose an intricate choreography as well as a workout. 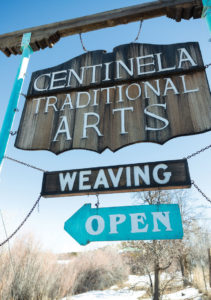 Spools of hand-dyed churro wool are added to the loom, thread by thread, to create detailed patterns and textures.

Centinela is steeped in history. The name comes from Cuchilla de la Centinela — the Sentinel Hill — from which generations of Chimayosos guarded against Comanche raiders. Across the valley stands Tsi Mayoh, one of the four sacred mountains of the Tewa people.

Weaving was an essential skill in historic haciendas, Irvin says, both to produce household items and for trade. Weavers made jerga (floor coverings), frazadas (blankets), and sabanilla (yardage material) among other products. When the wagon trains arrived from Mexico City, families exchanged their textiles for tools, needles, window panes, and calico. “Or,” Irvin says, “there are trade records that show you could trade two fancy frazadas for a horse in California.” 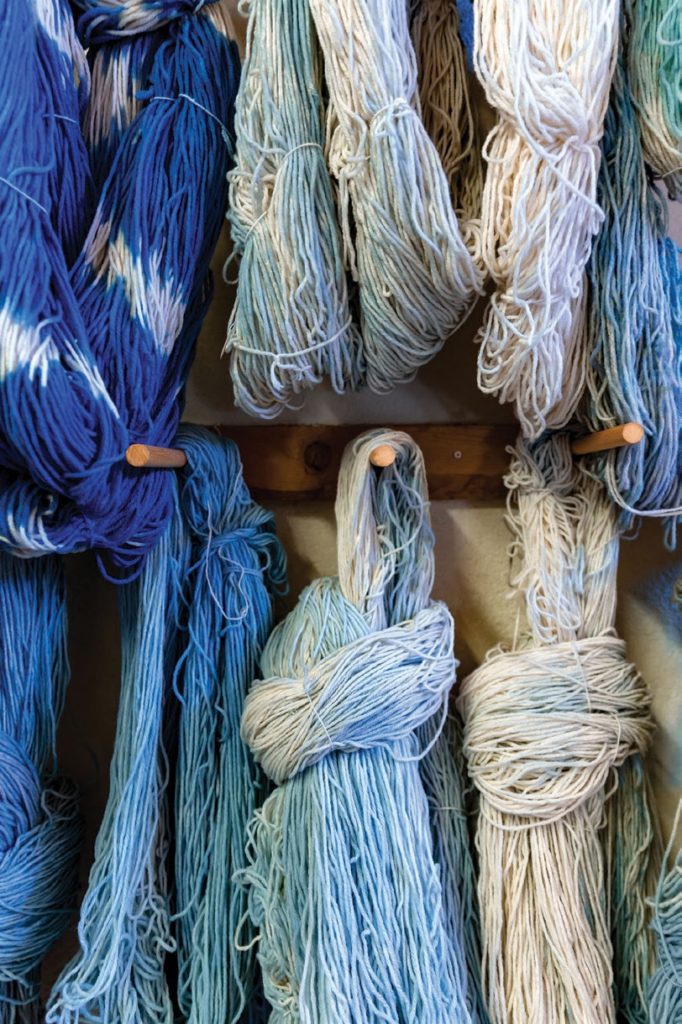 Making yarns and using locally sourced natural dyes, such as the indigos shown here, distinguishes Centinela from other weavers.

Irvin began weaving at age 10. He made a small piece as a gift for his sister, then found that friends wanted similar items. He produced several more and took a few to the Los Alamos, New Mexico, crafts fair where they promptly sold out at $10 each — a fortune for a 10-year-old kid. 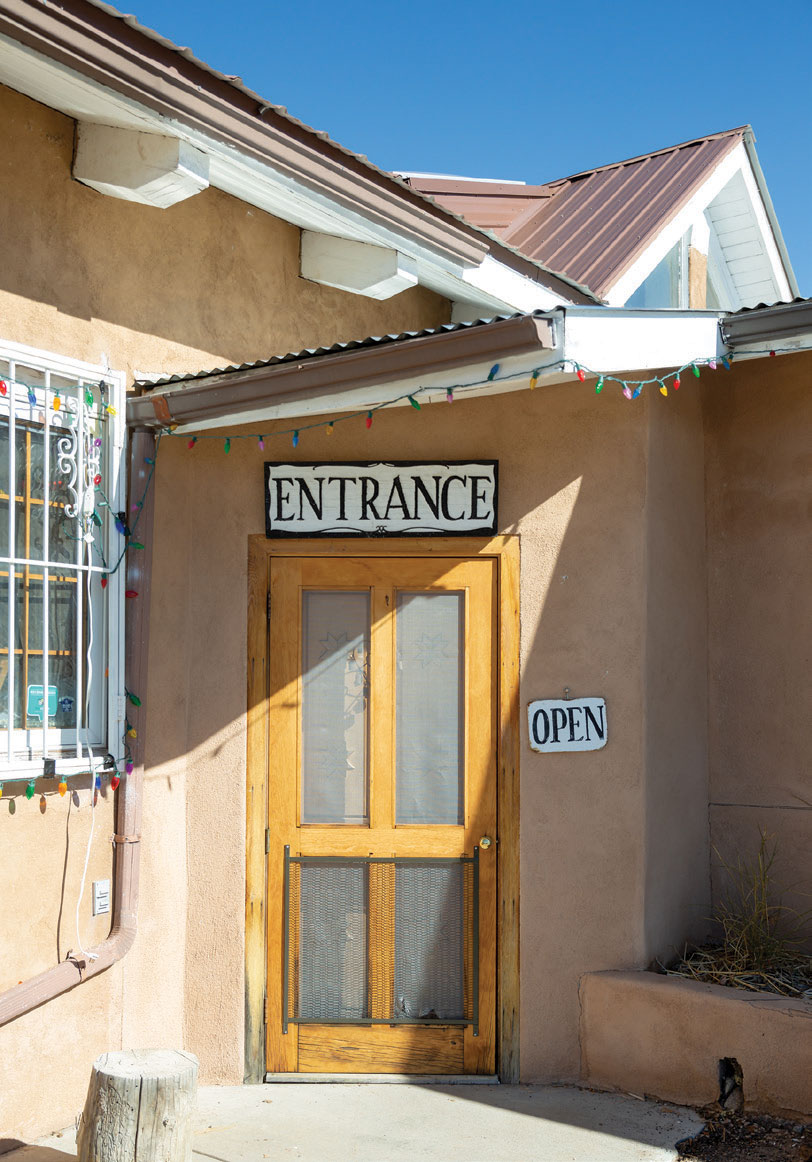 While much more time consuming and labor intensive, it allows the Trujillos to control the texture of the yarn as well as both its natural and dyed colors.

Observing that Irvin had both the interest and basic skills, his dad, Jacobo “Jake” Trujillo, suggested changes to the designs. “Dad had a philosophy of weaving one-of-a-kind pieces,” Irvin says. “He told me to make a unique piece each time to improve my design skills.”

Jake also taught his son to spin and dye. Irvin found spinning boring, but dyeing fascinated him. He and his dad wandered the land looking for seasonal plants to make traditional dyes — the bright yellow cota along the roadsides in July, for example, and the goldenrod near the river in August. 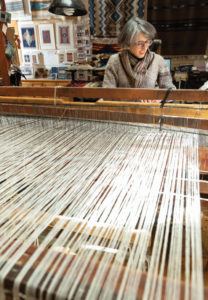 Lisa Trujillo works on her favorite loom. “The process is fascinating,” she says. “It’s an endless challenge. It requires math, logic, color, and texture.”

“My dad knew how to create texture with color,” Irvin says. “And he taught us that color is the most important part of the weaving. He said, ‘If I have a mediocre design and good colors, people will still buy it.’”

Irvin and Lisa met when they were both students at the University of New Mexico in Albuquerque. After they got married, she began to spin and weave too.

They both enjoy the challenge of the work. “You set up systems,” Lisa says. “You set up logic; and how you think shows up in how you weave. I like to set up something that’s going to change in a predictable way. The process is fascinating and an endless challenge.”

“I get bored easily,” Irvin says, “so I change all the time. I put a lot of design elements in a piece, so that it is interesting to look at. And it challenges me. I’ve been weaving for 50 years, and I need that.” 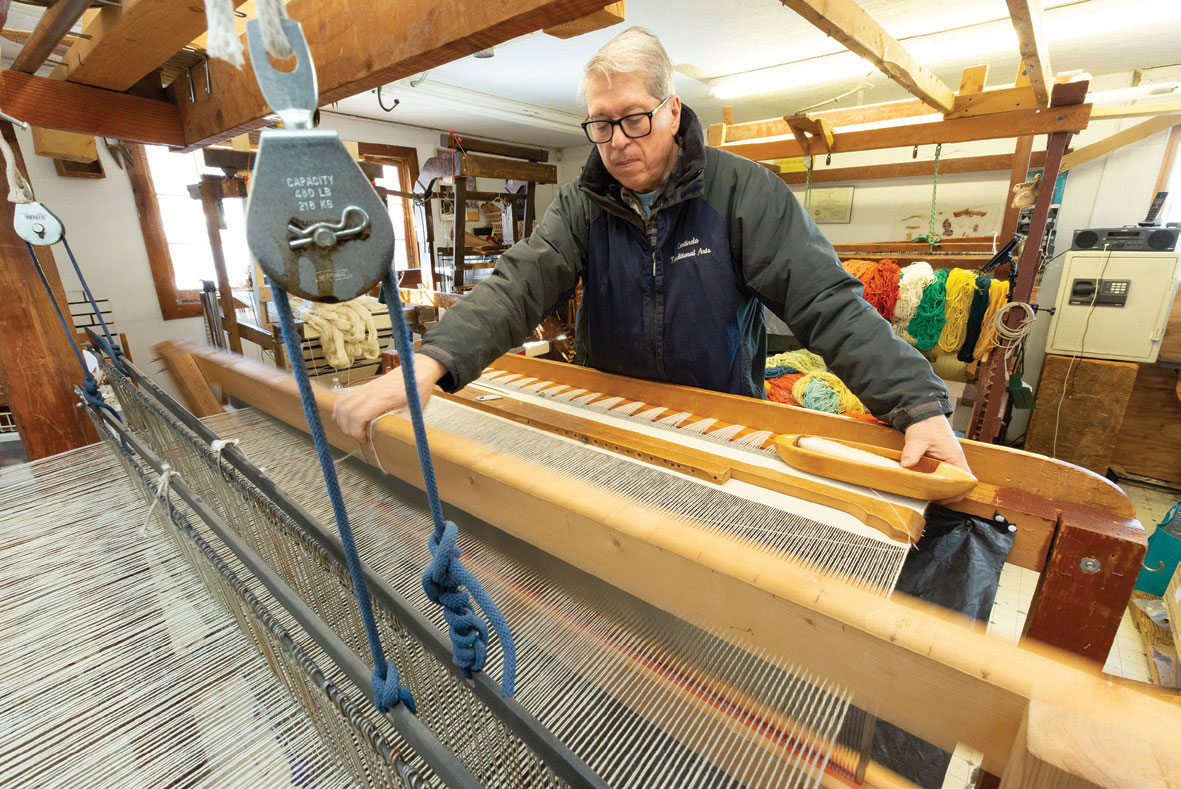 Irvin Trujillo begins a new piece. While weaving may appear simple, it’s a result of a carefully planned design process and days of setting up the loom.

He often incorporates traditional Spanish, Pueblo, and Navajo themes, but also draws on his backgrounds in math, drafting, and engineering to create technically sophisticated pieces. At times, he’s created works based on the Fibonacci Sequence and others based on the Golden Mean. 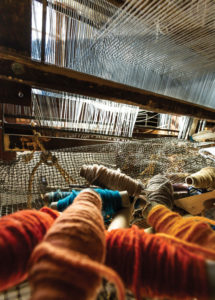 Spools of yarn collect on the loom. At the proper moment, each will be incorporated as “weft” into the pattern. “It’s like doing puzzles,” Lisa says. “There are a million problems to solve. And we feel really lucky we get to do this.”

Lisa and Irvin opened their studio in the early 1980s in an old building on the family farm. They evicted a tractor and horse trailer, put in a window, and added paint and carpet. Their only advertisement was a small sign out on the road.

Irvin was still working as a civil engineer, so they could afford to take a significant risk and pursue the fine art market. “We weren’t interested in mass production,” Lisa says, “but in the art form. We’re both curious, creative people. We both chose fine art to stay interested and to not have to compete with commercial operations.”

Within a couple years, they were winning awards at the Spanish Colonial Arts Society’s Spanish Market, and the studio was doing well enough for Irvin to quit his job and weave full time. They used his retirement money to build a small house, which also added weaving space.

In 1985, Lisa, Irvin, and Jake were invited to show as a family at the Millicent Rogers Museum in Taos, New Mexico. That was a breakthrough, and weavers soon began to knock on the studio door saying, “We want to work for you.”

They hired the best artisans to produce less expensive wares for the shop and the growing tourist trade, which allowed them to plunge more deeply into their own art. And they began researching museums around the West, looking at traditional designs and techniques. 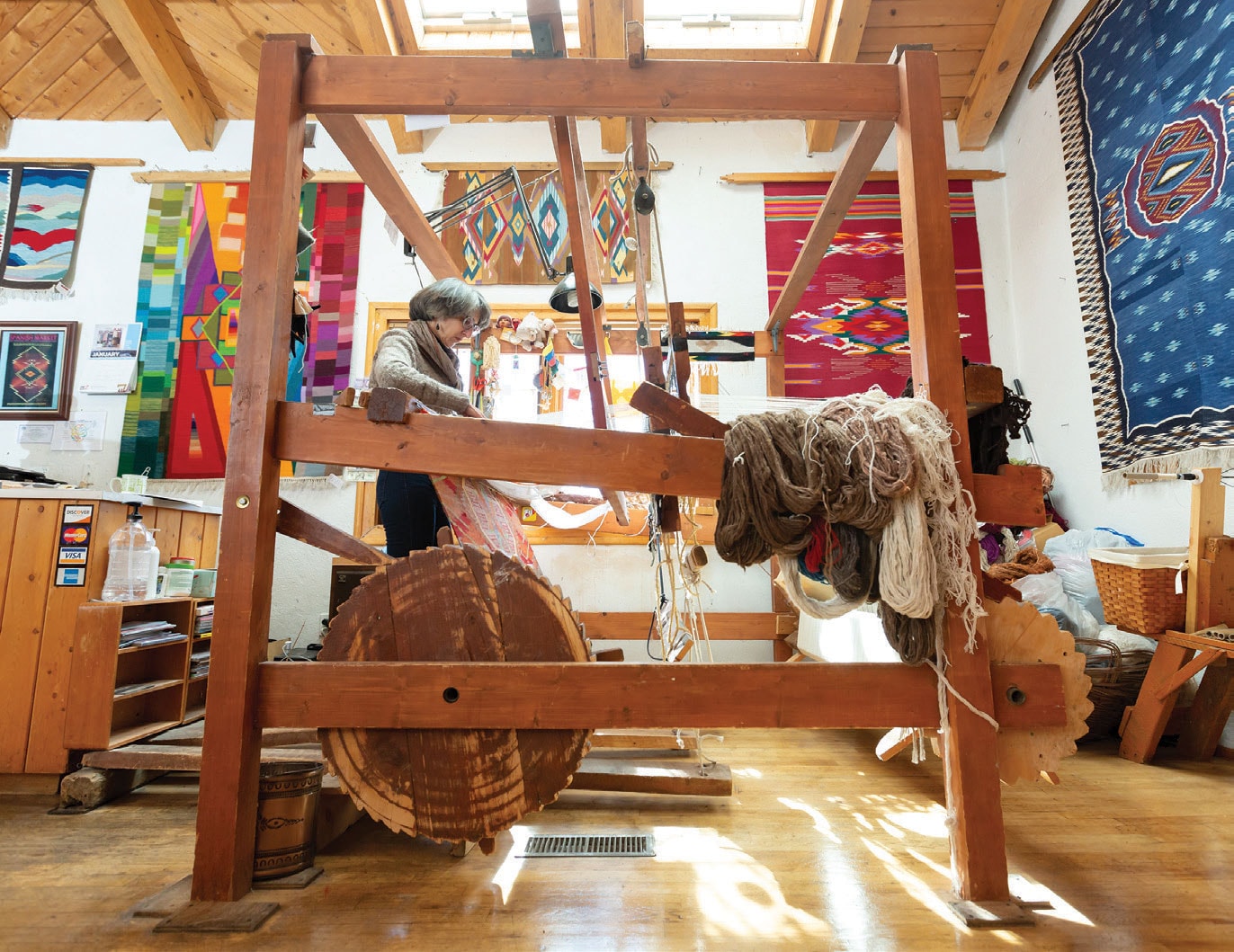 Lisa works on a traditional Chimayo loom. The design was introduced to the Americas by Spanish colonists in the 16th century, but the technology originated with the Moors of North Africa, who brought it to Spain in the 8th century.

When their children reached school age, the Trujillos agreed that Lisa would run the shop and Irvin would drive the kids about 45 minutes away to Los Alamos, which was rated among the top school districts in the state. Rather than driving back and forth to work in the studio, he borrowed his sister-in-law’s garage and set up a loom to work during the day. “And that’s where I really honed my skills,” Irvin says. “Because nobody was bothering me, and I was just concentrating on weaving.”

“The goal is to have that focused time,” Lisa says. “That’s what weaving requires — complete focus. Once he had that, his pieces just skyrocketed. He got so much better. He could do so much more detail. He mastered so many new things.” 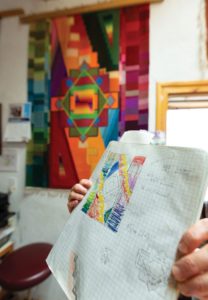 Lisa shows the drawing she used to create the piece on the wall behind her. “I like systems,” she says. “I like patterns. I like to make that work out. That’s just fascinating to me.”

In addition to spinning and weaving her own award-winning designs, Lisa still manages the shop, including overseeing some 15 weavers whose works she sells in the tapestry gallery. She also works hard to keep the lore and tradition of Chimayo weaving alive, researching and recording styles and techniques, writing books, making videos, and teaching classes to share that knowledge. “I totally respect the tradition,” she says. “I contribute as much as I can to keep it alive.”

David Rasch, director of the Santa Fe Spanish Market, says that Irvin and Lisa are carrying on an important tradition. “Both artists still produce traditional Chimayo designs,” he says, “but — in the true spirit of creativity — they have taken the art form to new heights with extremely complex designs and compositions that evoke three-dimensional space. These innovations are what keep the tradition alive in a dynamic 21st-century vitality.”

Centinela is also one of the few places left in America where the entire process of shearing, carding, spinning, dyeing, weaving, and also building looms is undertaken. The next generation is already assuming a significant role, as their daughter, Emily, has put aside her post-graduate work in anthropology to come back to the land and its art.

Today, Centinela’s top pieces bring tens of thousands of dollars, and several reside in the Smithsonian Museum. But while that recognition and commercial success are nice, it’s not what drives the Trujillos. 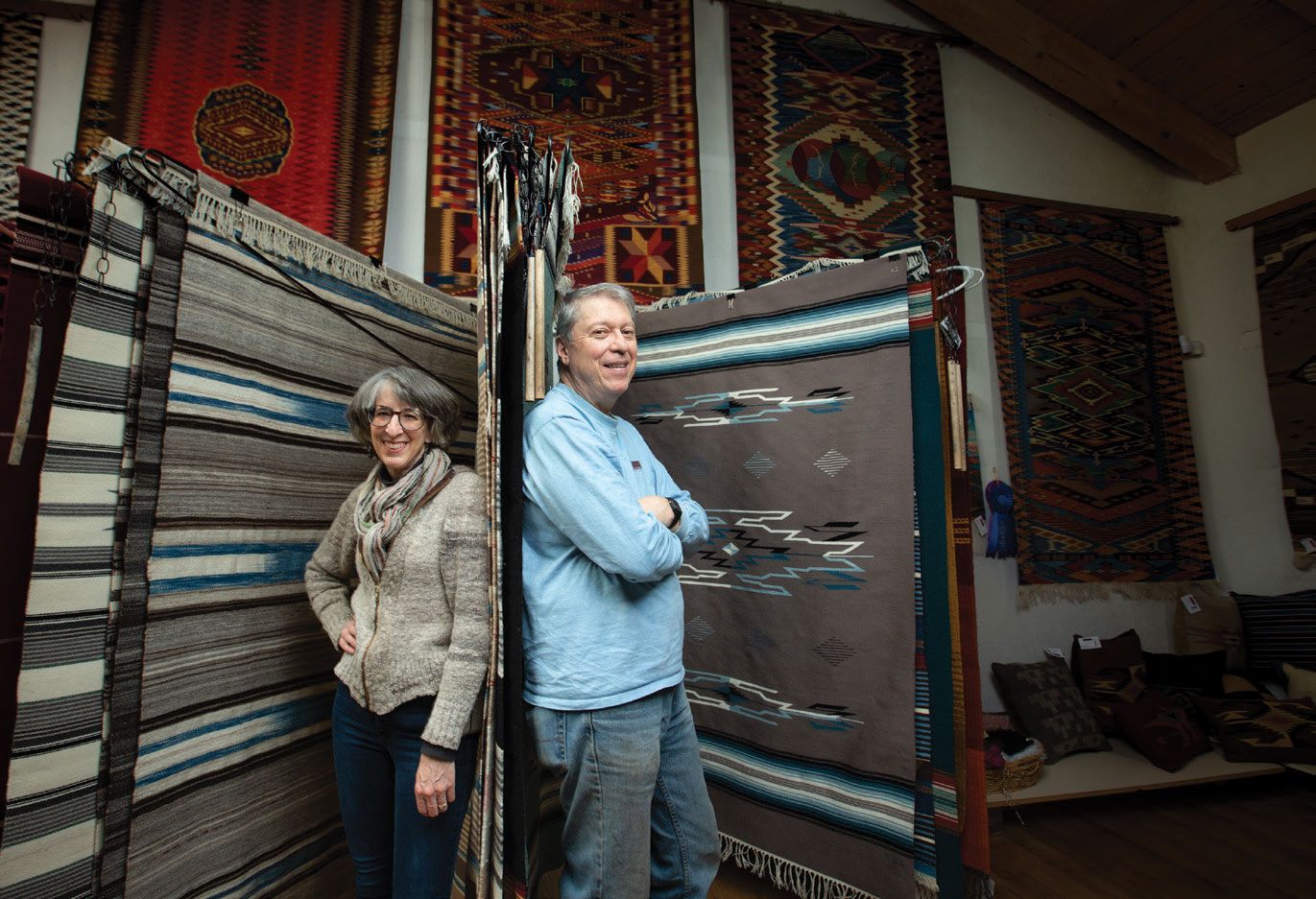 Lisa and Irvin Trujillo pose with some of the works in their shop. Note the variety of styles and patterns, including several traditional designs. “To create this work,” Lisa says, “you’re standing on the shoulders of generations of artists.”

“It’s a spiritual practice,” Irvin says. “It’s not about the money. I’m weaving to learn how to weave. I weave a piece in each of the styles: a Vallero, a Saltillo, a Chimayo, and a Rio Grande, and then I do a modern piece. And each time I weave in the cycle, I bring my experience to the new works, and they change.

“I’m trying to weave pieces that hopefully will be examples for Emily and her generation,” Irvin adds. “So like the pieces we were looking at in the museums, they’ll be able to look at our pieces and learn from them.”