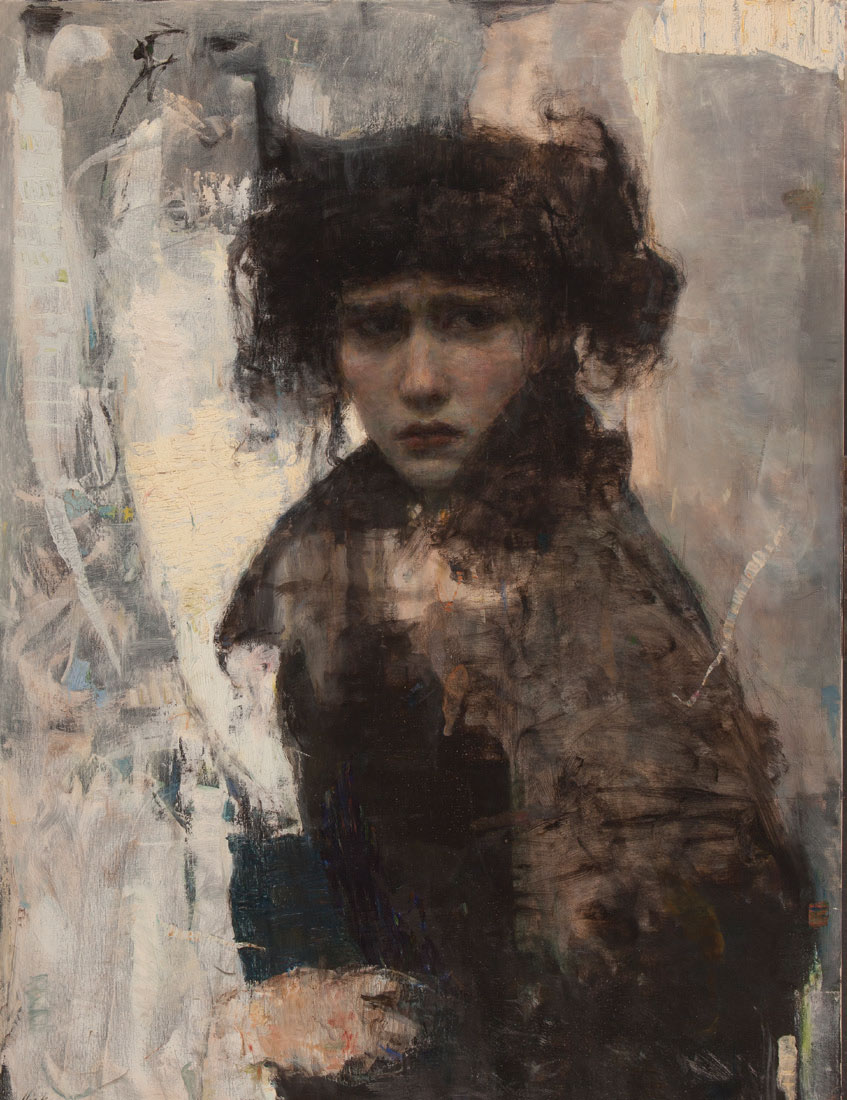 RON HICKS HAS ALWAYS BEEN A FIGURATIVE PAINTER. As a little kid, he could draw the neighbors with innate accuracy. He earned scholarships in high school and college to study fine art, and though Hicks pursued a career in graphic design after college, he says he’s always had a thing for figurative painting.

“I think the reason the figure stays with me is that there’s something people can respond to,” he says. “I’m interested in capturing the soul.”

What he didn’t realize when he was studying and practicing classical drawing and painting, however, was that he was becoming inured with a love of abstraction. 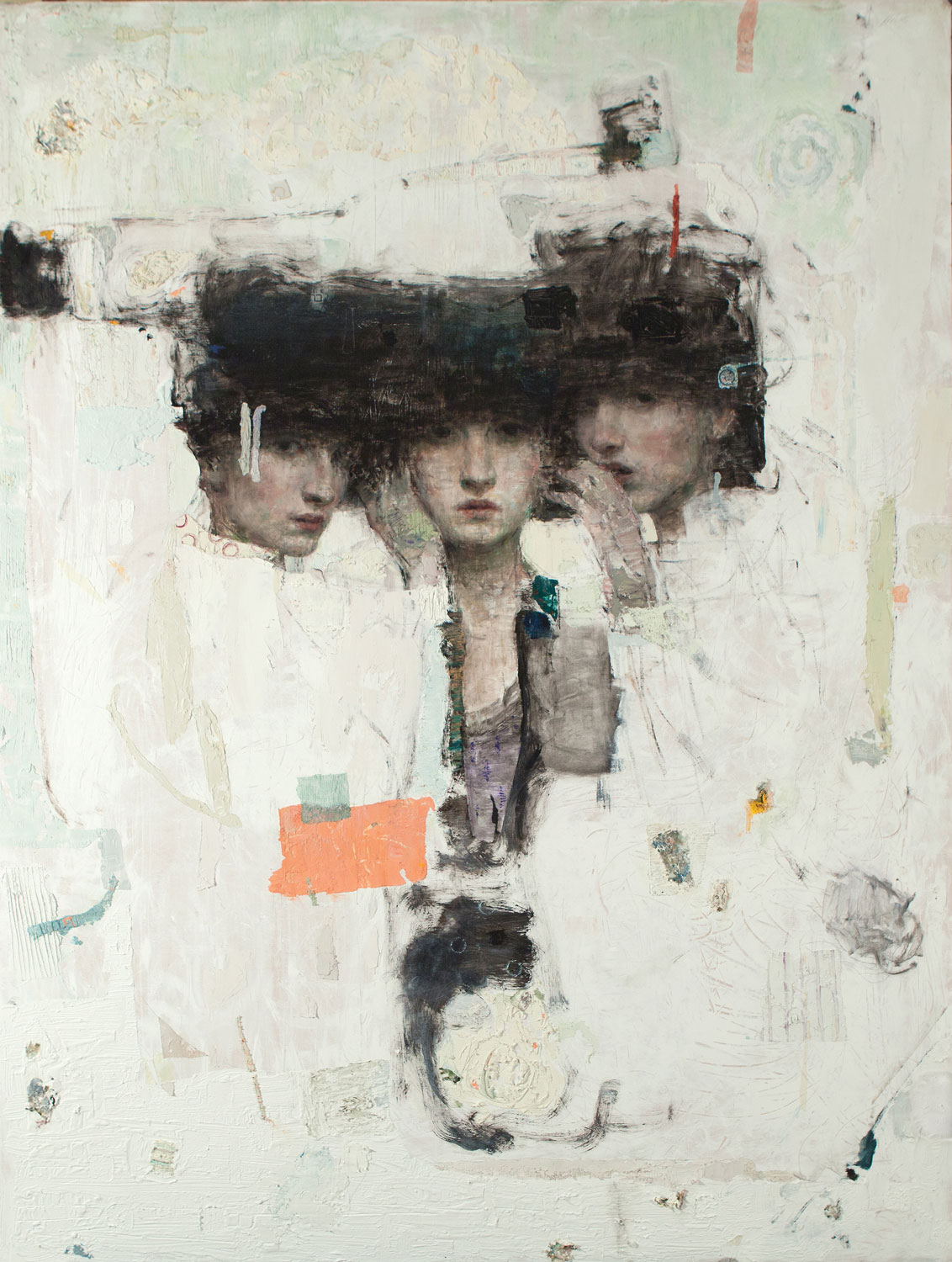 Born in Columbus, Ohio, Hicks’ family moved to Denver when he and his twin brother, Don, were two years old. He spent most of his childhood growing up in the Park Hill neighborhood.

After college, Hicks pursued graphic design, but hated it. After several years, he left and worked in management for Primestar (now Direct TV) during the day, while painting at night. Though grueling, it wasn’t long before he made a name for himself with his classical figurations.

Soon, successful one-man exhibitions in New York City, San Francisco, Denver, and Vail followed, allowing him to paint full time and travel. Part of this early oeuvre was based on trips to Europe where he’d become enamored with café scenes. Such scenes offered Hicks the opportunity to capture intimate interactions and the subtlety of conversations between couples. For art-buying patrons, this theme struck a chord. 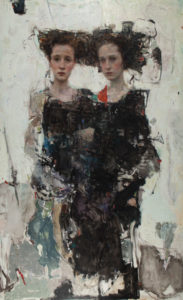 “Collectors could stand in front of his paintings for extended periods of time and construct amazing scenarios in their minds,” says gallerist Steven Diamant with Arcadia Contemporary in Pasadena, California. “The paintings did not allow you to just look at them and move on; they commanded your attention and drew you in.”

During this time, Hicks was also teaching at the Art Students League of Denver, which kept him engaged with the local scene and pressed his mind to solve artistic problems — albeit in order to help students learn to paint. But one day while teaching, an interesting proposition came his way, one that became the catalyst that immeasurably altered the course of his work.

“I was asked to collaborate with other artists on a painting that would go in an auction at the league,” Hicks recalls. “I got the canvas first and laid down something figurative, but kept it loose, and then sent it to another instructor, Michael Gadlin. He worked on it and sent it to a photographer who added things to it, so it had a found-object thing going on.”

For most artists, this would have been a one-off, but Hicks and Gadlin realized the power in experimentation and collaboration to propel them forward by opening new pathways. The two began to meet weekly and eventually brought in another artist, Darrell Anderson. Now, three strong voices worked together, passing artwork back and forth, and trying out new concepts, like limiting themselves to certain color palettes and working directly on the canvas at the same time. 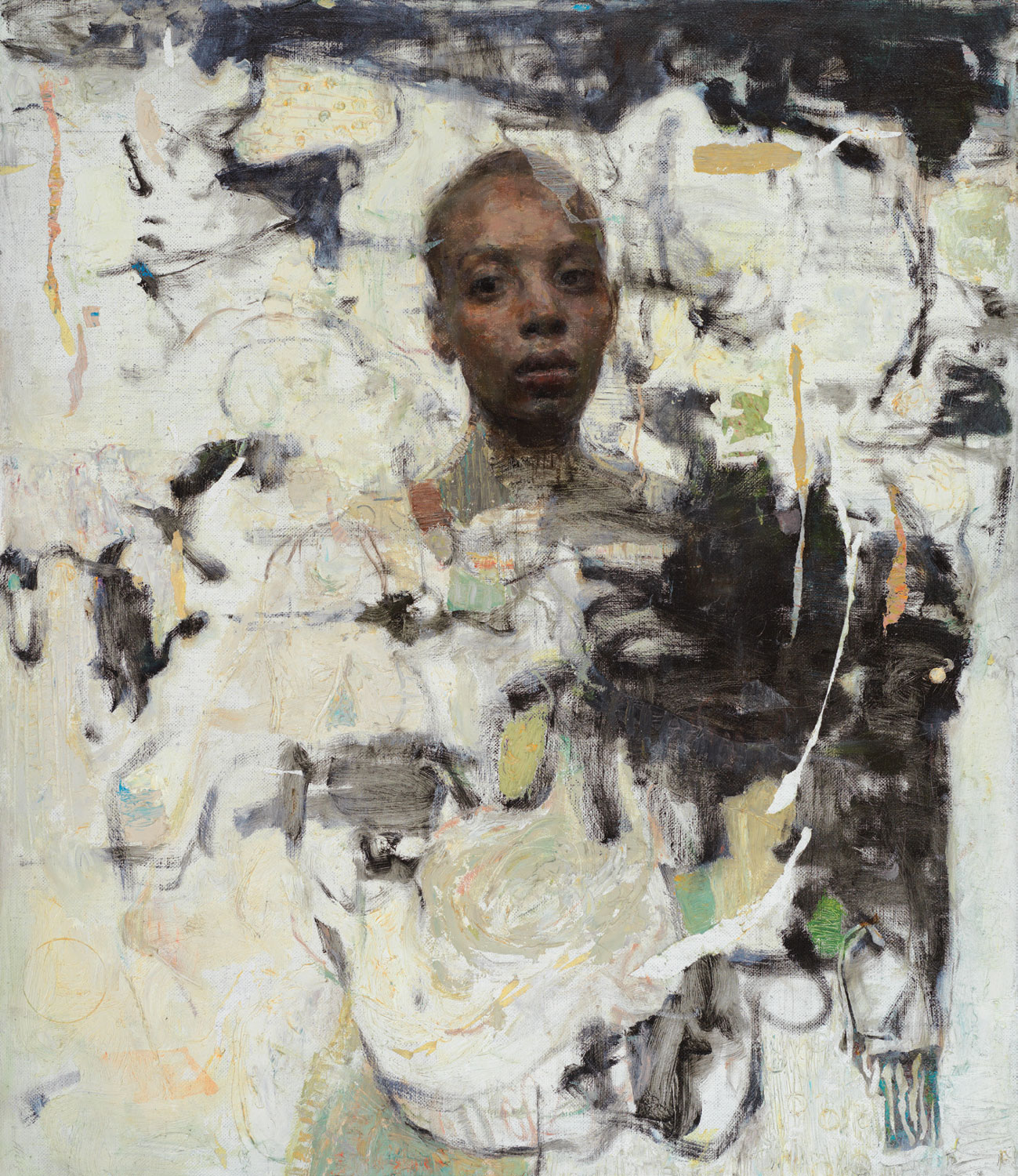 Enter gallerist and abstract artist Doug Kacena, who offered a new challenge to Hicks and 12 other artists. He suggested a trade: artists would go to his studio and take a painting, and he would do the same. Then each artist would paint over the other’s work. The resulting paintings were exhibited in 2016 at the Mike Wright Gallery in Denver.

“When [Kacena] came to my studio,” Hicks says, “I was all in. I realized I needed to be all in to make it work. Doug chose a piece that — on the market today — would be a $30,000 painting. My wife was like, ‘You’re doing what?’ But I knew I could always have my experience painting like I was; I wouldn’t get to have this experience where there were no parameters.” 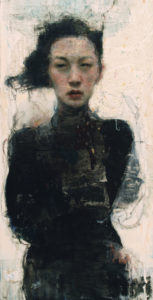 What Hicks didn’t anticipate was the reaction from some of his collectors. “I later heard one of my collectors say, ‘Oh, no, not that painting!’” he recalls, laughing. Along with the swap, there was a videographer who documented the process for PBS. “I had some collectors there watching the video of Doug painting over my painting, and they were getting upset about it,” Hicks says. “A few of them thought we were destroying the work. But what Doug was trying to do was deal with the idea
of crossover.”

Hicks also didn’t anticipate the epiphany that struck him during the exchange: “I came to the understanding that in the way you approach a painting, there was no difference between hyperrealism and abstraction; the underlying elements are the same.”

Kacena’s project had varying effects on the artists who stepped up to the challenge, but for Hicks it freed something within. Suddenly, he brought a renewed energy to the studio. He switched his mindset, from starting with a preconceived concept to letting the work create itself. “Sometimes, I start with a sketch or scribbles of shapes,” he says. “Then I take that idea into the studio and start building up the abstraction on canvas.” 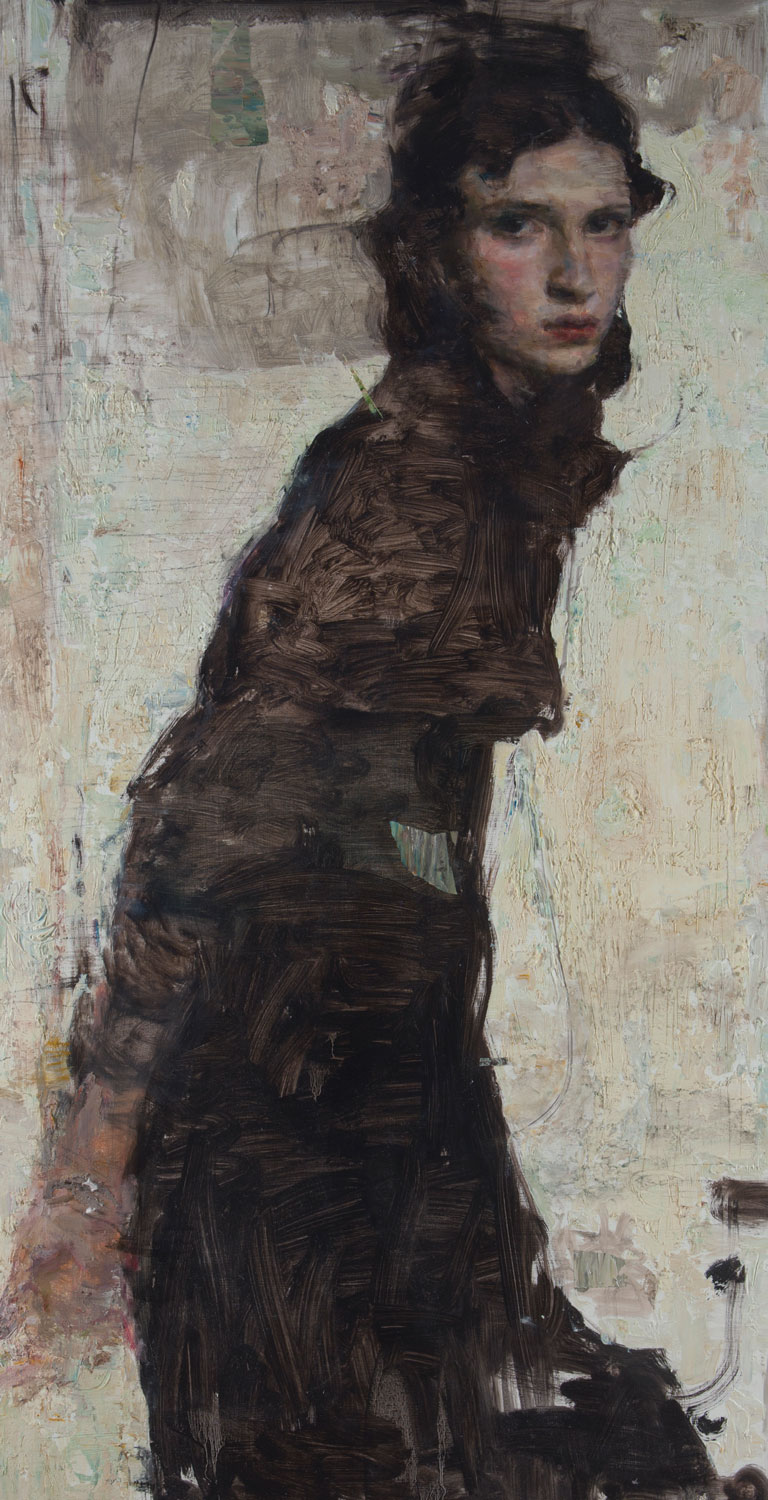 Today, his process has transformed. “Intuitively, I’m looking for a sense of harmony,” he says. “Without having any reference, I’ll start outlining where the figure should come in. At that point, if I feel like I need reference support, I’ll call in a model. All along, I’m creating a history with the underpainting. As I continue to work, none of the beginning work really goes away.” 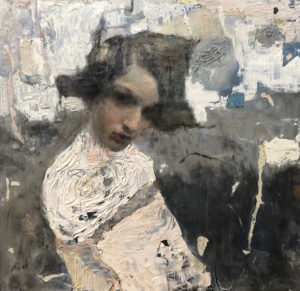 As excited as Hicks was with the possibilities when he first started experimenting, he never planned to let any of these abstract figurative works out of his studio. He was known for painting a certain way: classical realism. He had a collector base and galleries. He was earning a living as an artist — why mess with that? And yet, it was as if he’d opened a door and could not help but walk through. Encouraged by fellow artists, he posted a few pictures of the new paintings on Instagram; the response was overwhelmingly positive. By letting people see the new work, he realized he had no reason to worry that collectors and dealers would abandon him.

In fact, Hicks’ long-time dealer, Marc LeVarn of Vail International Gallery, was so impressed, he brought the new paintings to the 2018 SCOPE Art Show in Miami Beach during Art Basel. “Ron was getting typecast as a romantic painter of café scenes,” LeVarn says. “It was hard for him to find new subject matter, in my opinion. He managed to reinvent himself in a new-found way as a mid-career artist.”

In a sense, Hicks’ work changed quickly, yet the transition was a lifetime in the making. “If I fast forward to my work today, a lot has been stripped away, like background and furniture. I’m going straight for the emotion. There’s an emotional journey that I hope to convey.”

But Hicks is quick to add that an integral part of the process as an artist is not allowing oneself to become too satisfied. And so, whether he’s working with a model or letting the process unfold to reflect his inner vision, the desire is that each day in the studio is a session of life. 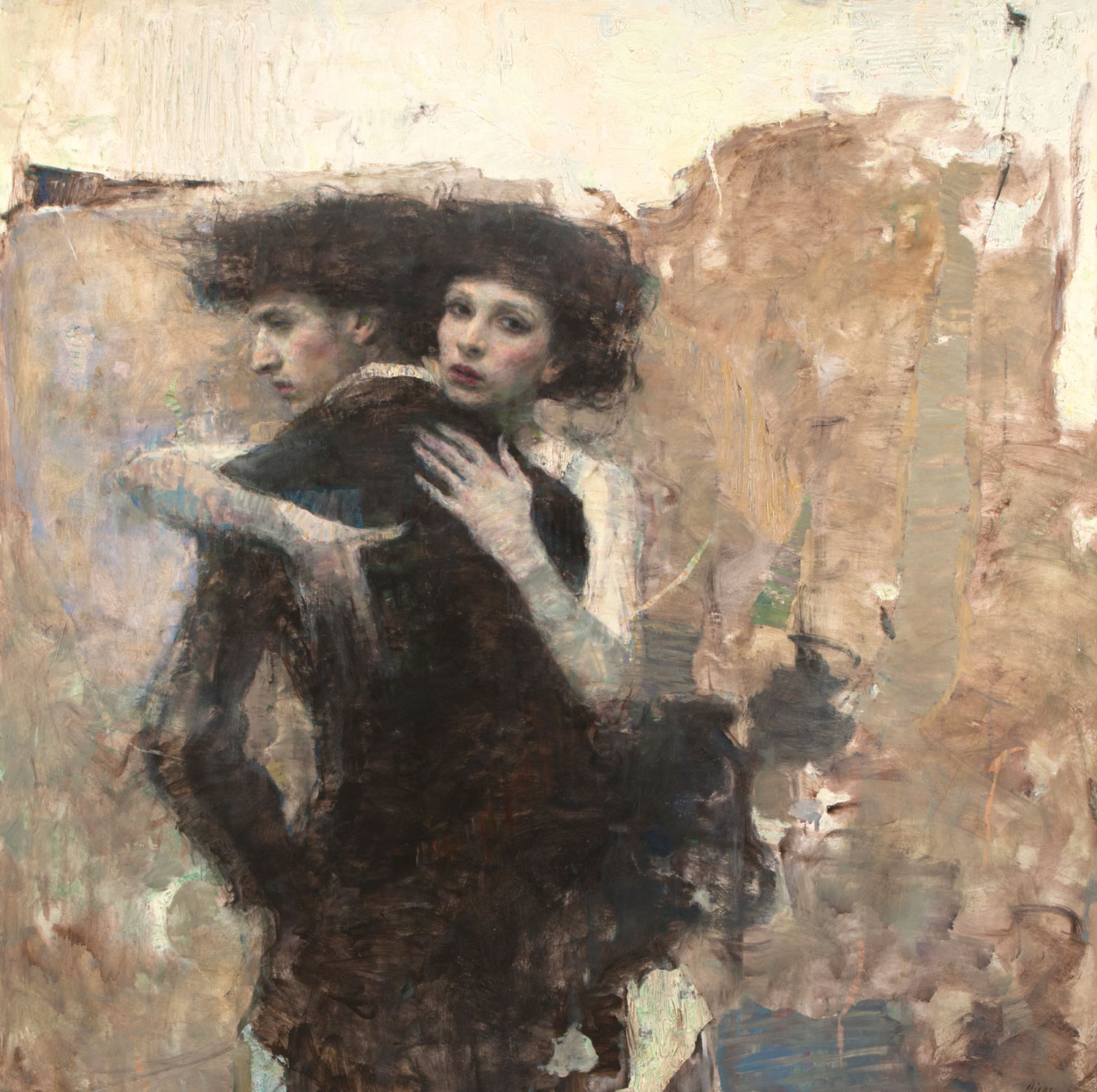 “If there’s anything that would create an artist block for me,” Hicks says, “it would be to have someone tell me to make a direct copy of something. As artists, we put parts of ourselves into the work. There’s a part of me going into the piece no matter what the subject matter is. At some point, the subject enters my soul or my mind and goes into the canvas.” He pauses and thinks for a moment, before adding, “I have this ache inside of my heart and soul to explore these ideas, and I can’t move on until I do it.”