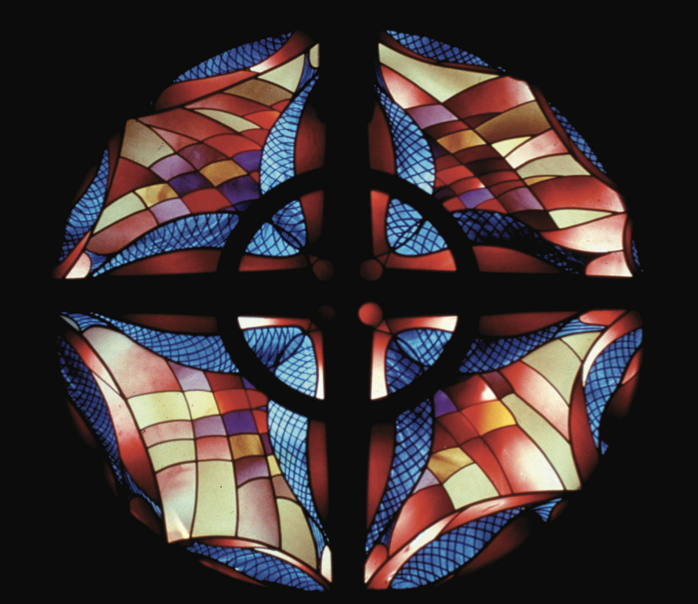 Created about 35 years ago, Devereaux’s first architectural commission, for Point Reyes Presbyterian Church in a fishing community north of San Francisco, blended elements of the New Testament and the town’s history.

Elizabeth Devereaux is playing a major role in redefining the concept of stained-glass windows as most people think they know them today. In fact, she refers to her creations — which can be found in both spiritual and secular settings — not by that old-fashioned term but rather as “architectural glass art.” She goes on to explain that the windows she designs and then fabricates with a team of up to five other people in her 4,000-square-foot studio in the Northern California city of Chico are “more abstract work that tries to collaborate with the architecture itself. It definitely has its roots in medieval stained glass. But rather than being strictly realistic or representational, my work often tries to take the medium much farther.” 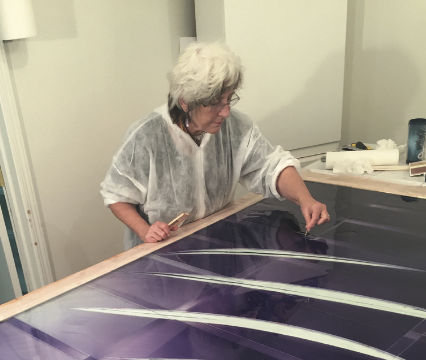 Consider, for example, her first church commission, completed in the mid-1980s after 15 years of working in glass: an 8-foot rose window for Point Reyes Presbyterian Church. Since the location was an old fishing town up the coast from San Francisco, she drew inspiration from the New Testament verse, “Come ye after me, and I will make you to become fishers of men.” The window features a Celtic cross entwined and encircled with abstracted fishlike forms, crosshatched in gold to resemble scales and netting. Devereaux even incorporated practical considerations. “It faces directly east into the low morning sun, so I chose translucent glass to diffuse the glare around the outside of the cross, but towards the inside the glass becomes transparent and darker to control the light.” 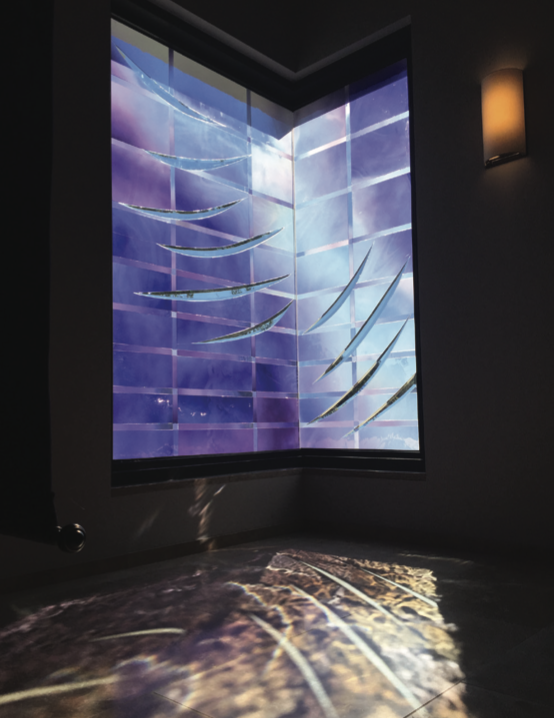 In 2015, Devereaux designed a dramatically abstract corner window for the Reconciliation Room of St. Thomas More Catholic Church in Oceanside, California, north of San Diego. The glass reveals hints of an olive grove just outside, shading to lavender and purple hues symbolic of penance. Curving prismatic laminations applied to the window with optical silicone reflect and refract the light from above in a metaphor for reconciliation.

Divine as the results may be, each of her windows has its start in a down-to-earth form as a small-scale watercolor. “What’s different about my finished work is that there’s a watercolor feeling to the glass,” Devereaux explains. 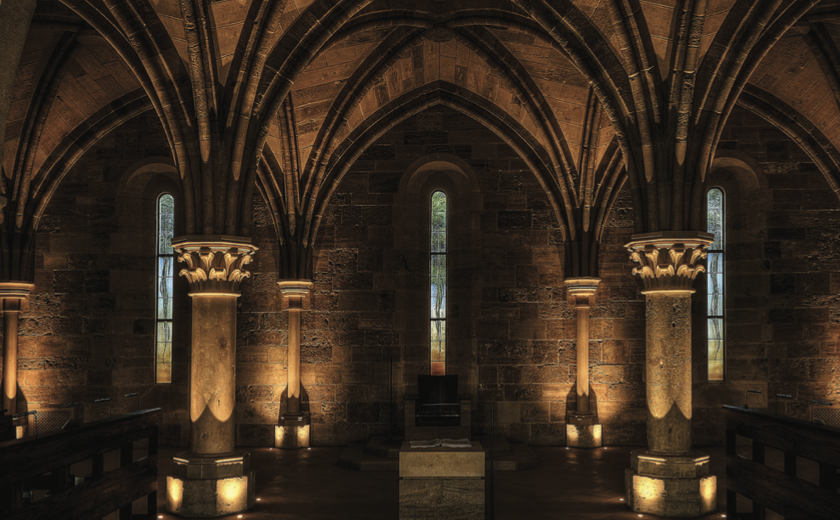 In 1931, William Randolph Hearst bought a 12th-century monastery in Northern Spain, moved its stones to California, and eventually deeded them to San Francisco. The monks of The Abbey of New Clairvaux in the town of Vina, near Chico, recently reassembled the stones as their chapter house, for which Devereaux created abstract windows that include 24-karat gold luster.

She has the glass for her windows hand-blown at two factories, Fremont Antique Glass in Seattle or Lamberts Glassworks in Waldsassen, Germany, “the biggest and oldest stained-glass blowing business in the world.” Often, the sheets of custom glass she orders are dipped in multiple micro-layers of color. Back in her Chico studio, she’ll even sometimes paint the glass with gold luster and fire it in the kiln. “I’m not afraid to spend money on getting the beautiful effects I want,” she says.

Ultimately, however, Devereaux’s creative goal is not about opulent effects but rather about something deeper and more elevated. “How do you depict, in form, something that has no form, that is invisible?” she asks, summing up the challenge she relishes facing with each new project. “That is where I try to go if I can.”

Devereaux’s work is found in houses of worship and public buildings throughout California and across the West.