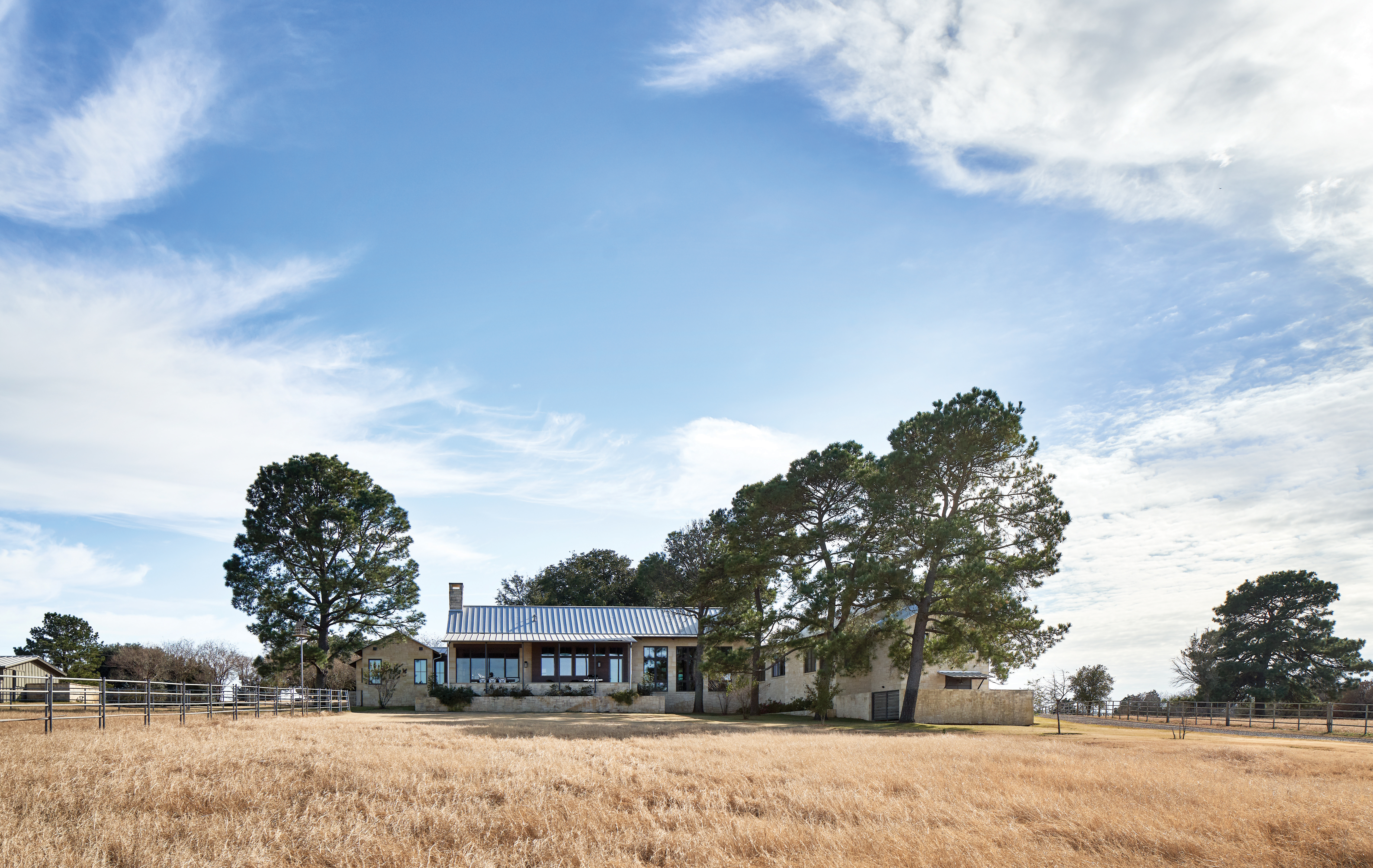 The single-story ranch house reflects a balance between local traditions and innovative design. Materials and forms are grounded in the vernacular of the Central Texas landscape, while big windows and deep porches bring the outdoors inside.

11 Mar At Home on the Range

IN 1977, FORMER OIL EXECUTIVE turned rancher Pete DeLeeuw and his wife purchased an 86-acre property in Brenham, Texas, a few hours east of Houston. Called Pennridge Ranch, it had a big tank — that’s a swimming hole to a Texan — the greenest grass for miles around, and access to all the hunting, fishing, and horseback riding a growing family could want. There was even a historic ranch house with a big covered porch. It was pretty perfect, says DeLeeuw. But then, the kids grew up. “Pretty soon, my girls started hitting me up to look for a place closer to Austin so we could all get together for weekends again,” he says.

As the DeLeeuws began looking for another ranch, they realized their previous location had spoiled them. In the business of raising Brangus cattle since 1978, DeLeeuw doesn’t mince words when he talks about his registered cattle enterprise. “If you’re going to make any money in this business, you need good moisture and good soil,” he says. And those conditions that are hard to find in most parts of Texas. 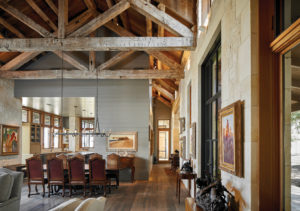 As luck would have it, they found their dream property right away. It had 600 acres of coastal Bermuda grass, two watering holes that were chock-full of bass, and access to even more recreation than their former ranch. The only problem? “The existing house was atrocious,” says DeLeeuw. They continued to look, but after nine months they returned to the property and bought it. “You can always fix a house, but you can’t fix the land, and the land was pretty darn nice,” he says.

The DeLeeuws hired Gary Furman, principal of Austin-based Furman + Keil Architects, to design the “new” Pennridge Ranch. With a keen eye for creating buildings that reflect a fresh balance between local tradition and innovative design, Furman was well-suited to the task; he designed a home with materials and forms that were grounded in a strong sense of the Central Texas landscape. And, having just completed a home for one of the DeLeeuw’s daughters, Furman was already familiar with the family’s lifestyle and their desire to fuse modern concepts with a traditional vernacular. 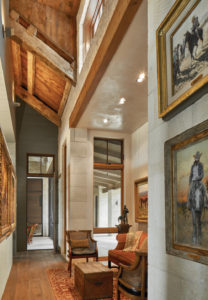 A selection of the owners’ Western and wildlife art collection hangs in a vestibule connecting the covered porch with the living room.

Initially, Furman focused on creating a master plan for the ranch compound, including barns, an arena, additional housing, a swimming pool, cabana, and a complete remodel of the existing house, which was going to be the family’s primary residence. But then, says DeLeeuw, so many family members would show up on weekends with their friends that they decided the existing home should really be a guest house. Changing gears, the architect began designing a new Texas ranch house, one that emphasized the views, natural light, and the ability to showcase an impressive collection of Western art.

From the beginning, explains Furman, the project wasn’t just about creating the DeLeeuw’s dream home. “We were designing a home on a working ranch, so it was important for the views and the orientation to be as much about the horses and the cows and the fence lines as it was about the materiality of the structure,” he says. And, just as architects choreograph all the spaces inside a home to make it a livable environment, so too did Furman’s team have to work within the existing confines of the large ranch compound to create a building that looked like it belonged there. 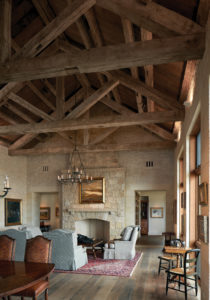 Traditional furnishings, arranged in comfortable clusters in the great room, add warmth and intimacy. The master wing is located just behind and to the right of the rough-cut native limestone fireplace.

The result is a loose arrangement of forms that maintain their own integrity. The home is clad in a native limestone with accents of cedar siding. Bay windows, simple gables, and a standing-seam metal roof strengthen the ranch-like vernacular that is so prevalent in the region.

When the family — which includes the two DeLeeuws and more than 20 children and grandchildren — isn’t hunting, fishing, or horseback riding, they gather in the kitchen, dining, and living room, a space that DeLeeuw describes as “a merging set of rooms where everyone’s in the kitchen.” The living room’s soaring 20-foot ceilings are supported by exposed pine trusses sourced from Quebec and clad in a rustic assembly of what Furman calls “old reveal wood.” Wide-plank wood floors, reclaimed from a barn in Ohio, frame a grand fireplace of rough-cut native limestone. 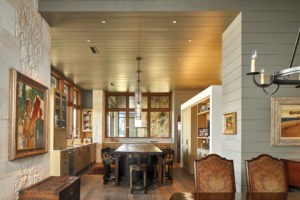 Separating the kitchen from the dining room and great room is a wall of painted poplar. A decidedly modern gesture, the wall’s smooth and precise detailing stands in contrast to the rustic beams and rough stone. A large island made from 2.25-inch-thick walnut and surrounded by a multitude of stools captures the overflow during family gatherings.

While the home’s inherent warmth can be attributed to good old fashioned Texas hospitality, it also has a lot to do with the furnishings, which consist largely of pieces the DeLeeuws have accumulated over the years. “Iron, glass, and stone are typically not materials that I would describe as warm,” says Houston-based interior designer Andrea Garrity of Garrity Design Group, “but used in combination with textural wood and plenty of natural light, we were able to achieve an environment that blends inside and out, creating a warmth that is perceptible the moment you walk in the front door.” 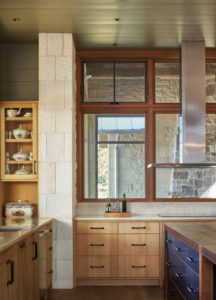 The minimalist nature of the kitchen design combines light wood cabinetry and a stainless steel hood with limestone, polished quartzite, and an array of windows. 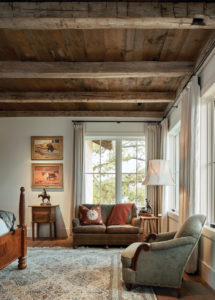 The sculptural patterns of loblolly pines are visible through windows in the master suite. Paintings and sculptures adorn the walls and tables.

Separating the kitchen from the dining room and great room is a smooth wall of painted poplar. A decidedly modern gesture, the wall’s precise detailing stands in contrast to the rustic beams and rough stone. In the kitchen, light wood cabinetry, a floating linear stainless steel hood, an induction cooktop, and quartzite countertops merge with a texturally rich off-white limestone and an array of windows. A large island, made from 2.25-inch-thick walnut and surrounded by a multitude of stools, commands the center of the space.

Perhaps the most challenging aspect of the design process was the DeLeeuws’ desire to showcase their stunning collection of Western paintings and sculptures by preeminent cowboy and wildlife artists, including Jim Reynolds, Bill Anton, Bill Owen, Jim Norton, and Kenneth Riley. Learning about and meeting the artists is as much fun as hanging their pieces on the wall, DeLeeuw says, and he enjoys sharing the stories and art with family and friends.

As for the horses and cows, the DeLeeuws are in seventh heaven when they’re at home on the ranch. “When all you can see is beautiful green pastures and black cows, what more could you want?”