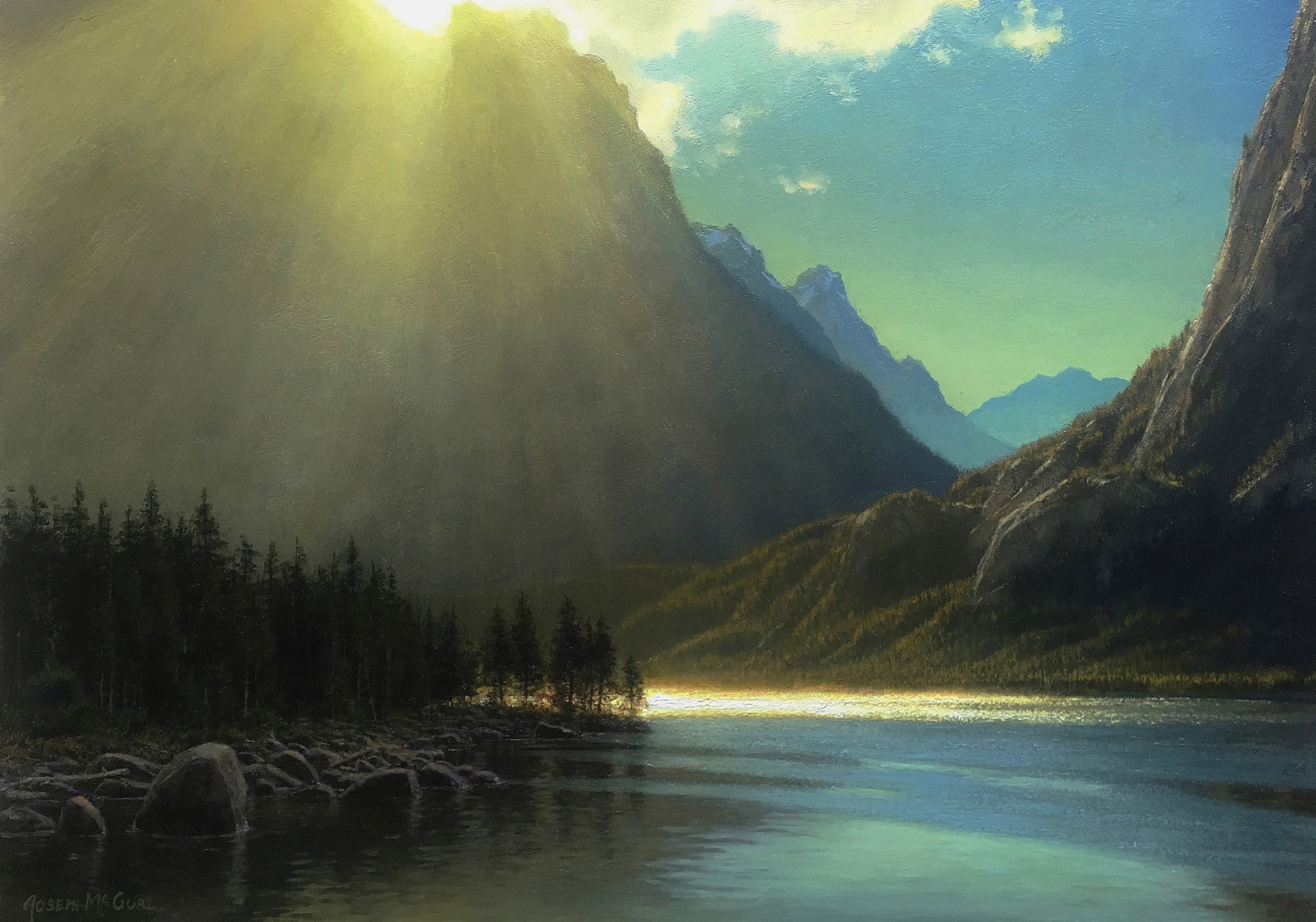 ARTIST JOSEPH McGURL CREATES PAINTINGS that are brilliant flights of his imagination. He doesn’t replicate nature’s landscapes; he inspires with masterful compositions that spring from decades of outdoor observations and experiences. Each painting tells an eloquent, emotional truth about the natural world. As Ralph Waldo Emerson wrote, “There are no days in life that are so memorable as those that vibrate to some stroke of the imagination.”

McGurl is a self-described contemporary Luminist. The term Luminism was introduced by mid-20th-century art historians to describe a 19th-century American painting style characterized by the observed effects of light in natural settings. It developed as an offshoot of the Hudson River School and was influenced by Transcendentalism.
McGurl’s style emphasizes tranquility. As seen in The Golden West and Evening Peace, his paintings often depict calm, reflective water and are bathed in golden light; they evoke a sense of intimacy, a private moment of spiritual connection. “They are not about action and excitement,” the artist says. “I would describe them as quiet, contemplative, and thoughtful.” 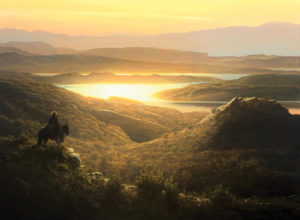 “As a realist,” he adds, “I work in a sphere that must function on several different levels simultaneously. I have a deep emotional connection to the landscape, which is also a vehicle to explore my interest in modern physics, spirituality, and the effects of light, form, space, and color as interpreted with paint. The slice of reality that man is capable of experiencing and the higher reality that permeates time and space is my true subject.”
Like the Transcendentalists of the 19th century, McGurl finds nature to be a portal to the divine.

Born in 1958, McGurl spent his youth along the Massachusetts coast exploring the islands around Boston Harbor — sailing, swimming, waterskiing, fishing, lobstering, and camping. In the process, he developed a profound appreciation for nature. Tides, wind, and the weather were everyday concerns, and he’s never lost his love of big skies, open water, and vast vistas.

The artist grew up working with his father, James McGurl, a highly successful muralist and his most influential teacher. His father instilled an openness to experimentation with subjects and materials along with a strong work ethic that the artist maintains, frequently working for up to 12 hours per day. “My father was the hardest worker I ever saw. He taught me how to make paintings from my imagination and to not depend on photographs as source material,” he says. 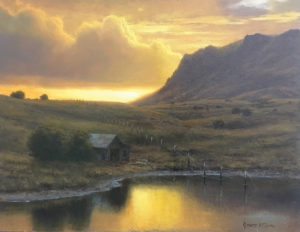 As a child, McGurl attended Saturday classes at the Boston Museum of Fine Art, where the Luminist paintings he walked past each week left an indelible imprint and where his teacher, Ralph Rosenthal, became another early influence. He subsequently earned a Bachelor of Fine Arts from the Massachusetts College of Art and Design. After a few years as a yacht captain, sailing from Maine to the Caribbean, he decided to devote himself to painting and studied figure drawing under Robert Cormier, a devotee of the French Academy methods. Travels and additional studies in Europe rounded out his formal education.

McGurl spends long hours outdoors, absorbing nature’s specific characteristics, creating field studies and sketches, and making notes about changing light, space, and the water’s reflections and transparency. “My paintings are informed by thousands of plein air studies,” he emphasizes, “which lend emotional and empirical truth to the imaginary scenes I depict. For me, a high fidelity to visual impressions predominates over the individual ego and the narrative content in my art-making.”

McGurl’s studio process begins with confronting the challenges of transforming nature’s all-encompassing grandeur onto a flat surface while still realistically depicting three-dimensional light, form, and space. Toward that end, he uses a variety of techniques. He manipulates or adds materials to the paint to add interest and dimension, including beach sand, glass beads, modeling paste, and impasto mediums. Layers of glazing, sgraffito, and patterns further enhance the paint’s surface. 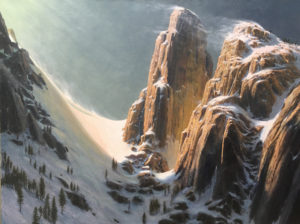 McGurl considers the characteristics of each compositional element. Rocky cliffs might call for a rough, aggressive texture, while the sky will be smooth, with brushstrokes seamlessly blended. He employs various tools to add definition — perhaps an eagle’s feather for the sky — scratching, sanding, or using steel wool to reveal the underpainting, and making flurries of gestural palette knife strokes. Each choice affects how light hits his canvases and creates a greater sense of movement and dynamism.

This past January, for the third year in a row, McGurl was included in the Coors Western Art Exhibit & Sale in Denver, Colorado, where his work is enthusiastically received. “Joe McGurl is a purist,” says curator Rose Fredrick. “A modern realist who eschews photography, who actually believes artists should draw. I’ve watched him paint; he’s magic. He sees the light and the luminosity in the world and portrays it with such gentle honesty that is unlike any other artist working today.” 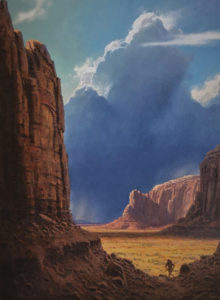 McGurl has racked up an impressive list of accolades, including important museum shows and prestigious gallery representations. He has a solo show April 30 through May 26 at New York City’s prominent Cavalier Gallery, and another in their Nantucket location in July. Ron Cavalier, president of the galleries, remarks that the artist’s appeal “lies in several unusual qualities. His signature handling and understanding of light extends far beyond simply illuminating a scene; it is a key dramatic element of his art. He forms profound personal connections with the landscapes he depicts, allowing his memory and imagination to enrich them, making each painting distinctively individual.”

McGurl’s craftsmanship has been noted by many professional organizations. Johanna Blume, curator of Western art at the Eiteljorg Museum in Indianapolis, says he is “one of the most influential and sought after landscape artists in the country. He is a fixture and favorite at our annual Quest for the West art sale and show. Joseph’s work is illuminating and breathtaking, and he is highly regarded within the Western art community.” 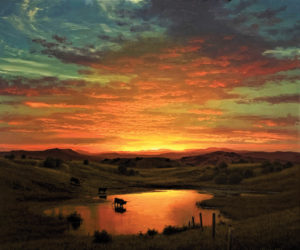 In addition to multiple museum collections, McGurl’s paintings are included in the Forbes and Mellon collections. For the past five years, as a designated “Living Master,” his work has been featured in the Art Renewal Center’s annual international salon at the European Museum of Modern Art in Barcelona, Spain. Other prestigious memberships include the Plein Air Painters of America, the Guild of Boston Artists, and New York’s Salmagundi Club, where he has participated for the past nine years in their premier American Masters exhibition. Additionally, he represented American landscape painters in China in 2019, where he presented a series of lectures and demonstrations. And he continues to conduct workshops and lectures across the country. 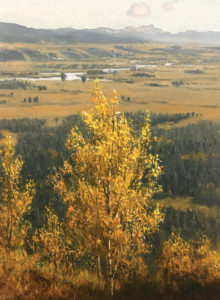 McGurl’s landscape paintings allow him to meditate on life’s big questions. Even though, he says, he will “never find the answers,” contemplating and interpreting nature brings him closer. His work reminds us of the glory of the world’s wild regions, and it brings us hope for their continuation and preservation. As Emerson so beautifully expressed it, “In the presence of nature, a wild delight runs through man.”