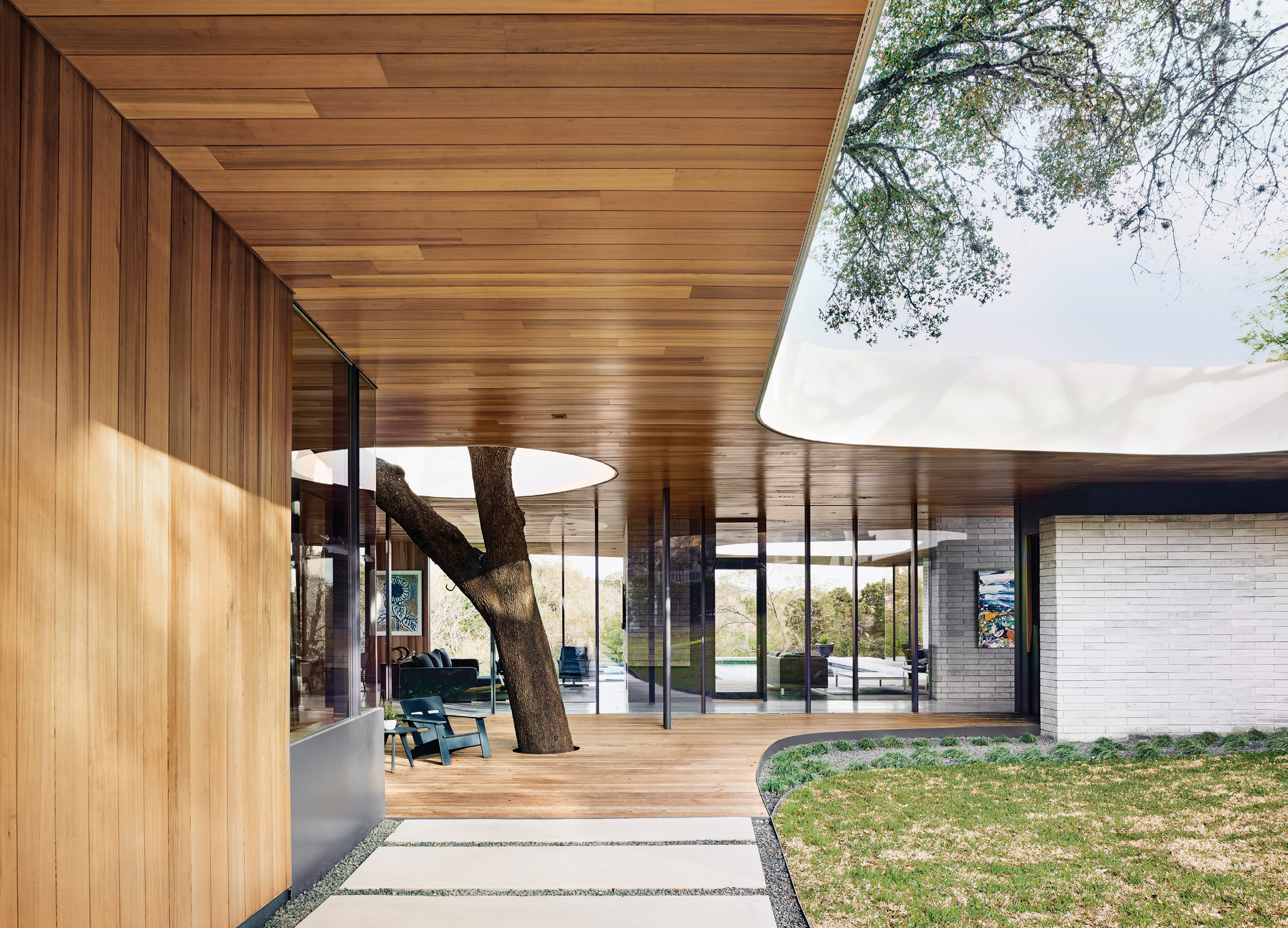 In a home named Constant Springs, the interior ceiling extends to the soffit in clear-sealed western red cedar with a whitewash stain, interrupted only by the open space accommodating a live oak. The ipe wood deck is approached by a walkway of Lueders gray limestone from Boral.

11 Mar Rendering: A Sense of Discovery

“I never like the way our buildings are photographed,” says Kevin Alter, founder of Alterstudio based in Austin, Texas. “Architectural photography is mostly trying to describe a form. You never get a sense of how a room is sculpted by the way light comes into it and makes it a living creature, something that’s always animated.” 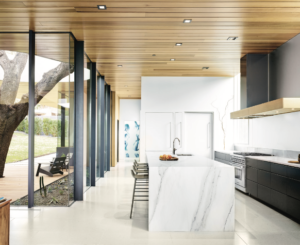 Even in the kitchen, glass curtain walls connect the house to the outdoors. The countertop is Colorado gold marble fabricated by Decorum Architectural Stone, the backsplash is an acid-etched mirror, and the appliances include a Wolf range and a Sub-Zero refrigerator.

Search through the project photographs on Alterstudio’s website, and you’ll find few shots delineating the designs as a whole. Instead, you’ll find more images attempting to illustrate the interplay of textures in the materials, and an even more noble attempt to convey the intriguing play of light that is one of the firm’s signatures.
“We get a lot of people coming into rooms on house tours,” Alter says, “and they’ll ask, ‘What color white is that on this wall?’ It’s not like we’ve used some special paint; it’s how we’ve prepared the wall, how we’ve set it up, so it catches shadows and light.”

Alter is quick to point out that although he’s the firm’s founder and namesake, all of Alterstudio’s projects pass through the hands of three equal partners: Alter, Ernesto Cragnolino, and Tim Whitehill. “It’s a collaborative effort. I get to take credit for the brilliance of the people I work with,” he jokes. 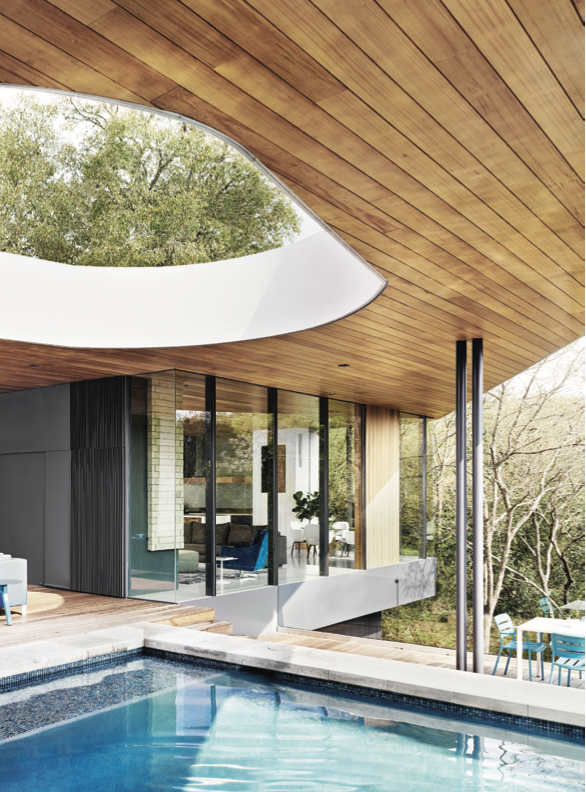 Visitors enter the house on what appears to be a flat grade but find themselves delivered into the treetops as the ground below unexpectedly drops away. The Saarinen Executive Armchairs and the Platner Dining Table are from Design Within Reach. The flooring is custom terrazzo tile by Wausau Tile. The rug is hand-dyed cowhide by Avo.

Alter grew up in New York City, the son of idealistic attorneys. His mother was among the second class of women admitted to Harvard Law School. She did constitutional work, and his father worked for unions. Both argued before the Supreme Court. From them, Alter inherited a desire to change the world for the better, but from a different plane. “It’s not like I’m a small town doctor saving lives,” he says. “But I am doing something significant for folks.”

The architect’s career path began in fine arts. “I was probably better at ceramics,” Alter says of his early collegiate days at Bennington College, “but I enjoyed architecture in a different way.” He went on to Harvard for his master’s degree, but when he graduated in the late ‘80s, filled with ambition and idealism, he found that architecture in the U.S. was in a bit of a slump. So after a brief period with a firm in Boston, in 1991 he accepted a teaching position at the University of Texas at Austin (UT). A year turned into two, and for some years, he was an administrator. “Rather than having a practice,” he explains, “I was learning by teaching. I would focus on the work I was interested in, and I had to determine why I was interested in it.” 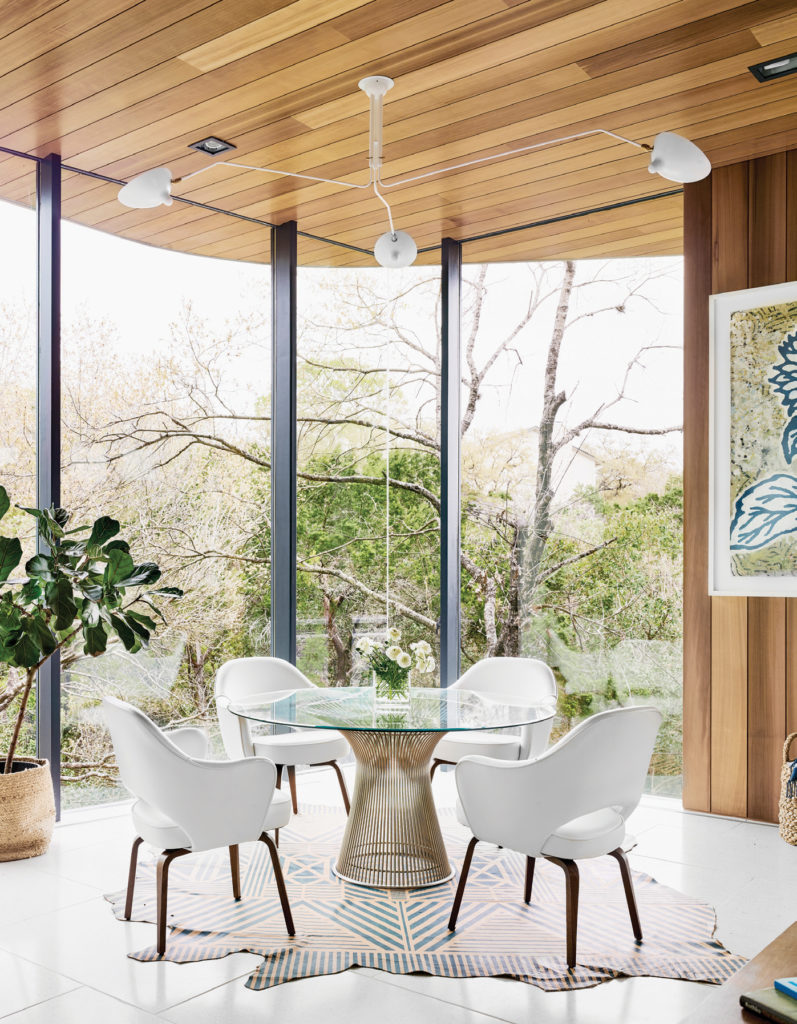 The roof opening above the pool allows for sky views and the drama of rainfall. Photos: Casey Dunn

Away from the East Coast, he was untethered. “I was free to develop a theory of practice that was more my own, rather than get it beaten out of me as so many of my colleagues had,” Alter says.

In the publish-or-perish university world, Alter wrote books and papers and also had the advantage of inviting architects he admired to speak at the university, including Pierre Koenig and Rudolph Schindler. Koenig took the young architect on a tour of his landmark Los Angeles Case Study Houses, and Alter was shocked to find that Koenig still had the keys to each one.

“Uh, don’t we have to call first?” Alter remembers asking. 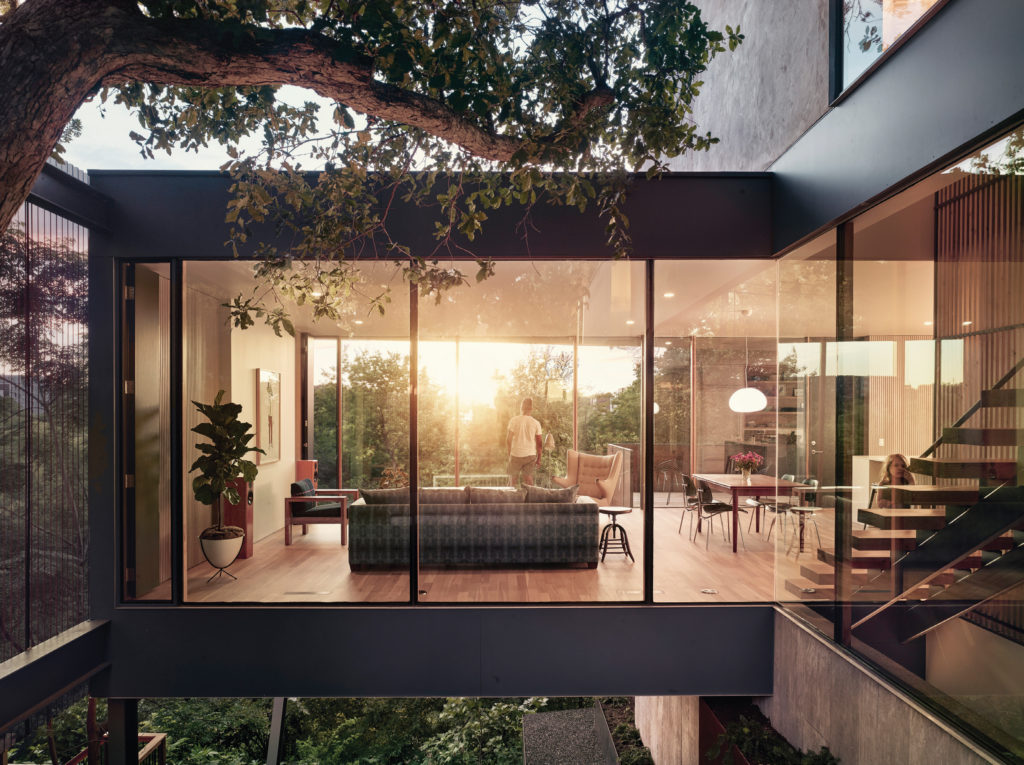 In a home named South 5th, the cantilevered living room appears to float in the air, with views of the private courtyard on one side and the treetops and steep escarpment on the other.

Alter is deeply inspired by Swiss architects Peter Zumthor and Herzog & de Meuron, as well as by Portuguese architect Alvaro Siza. What interests him most are their earlier, smaller designs that precede the monumental works and Pritzker prizes. “I was looking at work that had incredible integrity, that was trying to be meaningful in a humanist way,” he says. “They were so powerful to me as touchstones. They really integrated themselves into the landscape so that you see it in a different way. Those things to me — they’re little, but their effect is enormous.”

Alter opened his practice in 2004 in Austin. Cragnolino soon became a partner, followed by Whitehill; both were former UT students.

“Dynamic form seems to always win the day,” Alter says. “Like Frank Gehry; they’re heroes because they use exciting sculptural shapes. I’m not interested in that. I’m much more interested in buildings as a container for life that prompts you to see the world and live in ways that are new and unexpected and powerful — not compositions of proportions.” 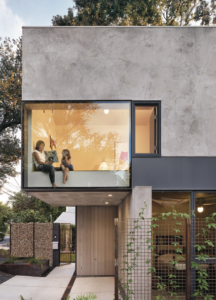 The ceiling and soffit are cedarwood, which, along with glass walls, continue the experience from indoors to out. 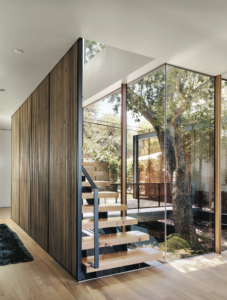 A corner window connects the house with the entry courtyard. The custom windows are framed in rift-sawn oak and steel to form flitch plate mullions. 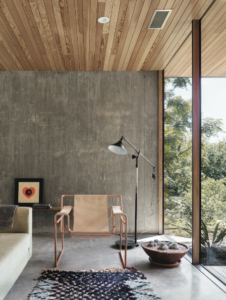 Most of South 5th looks inward toward the courtyard or out over the forest, but a modern take on a bay window faces north toward the Austin, Texas, skyline. 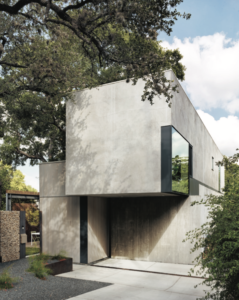 The dynamic mix of elements on the exterior — including mill-finished steel, raw stucco, and concrete — provides an ever-changing play of light and shadow. Photos: Casey Dunn

From his early study of ceramics, Alter has carried over an appreciation for Asian design and its departure from Modernism. “There’s something about the Asian aesthetic that values eccentricity and accidents that arise out of circumstances rather than the Bauhaus notion of imposing something,” he says. “We compose, but it’s to frame something so that the shadows from a stand of bamboo fall onto an unfinished, rough wall, which is more fascinating than a composition by Mondrian. So you could argue that what sets us apart is this interest in Modernism that is more about the building being like a primed canvas for a painter, for nature to play out its wares.” 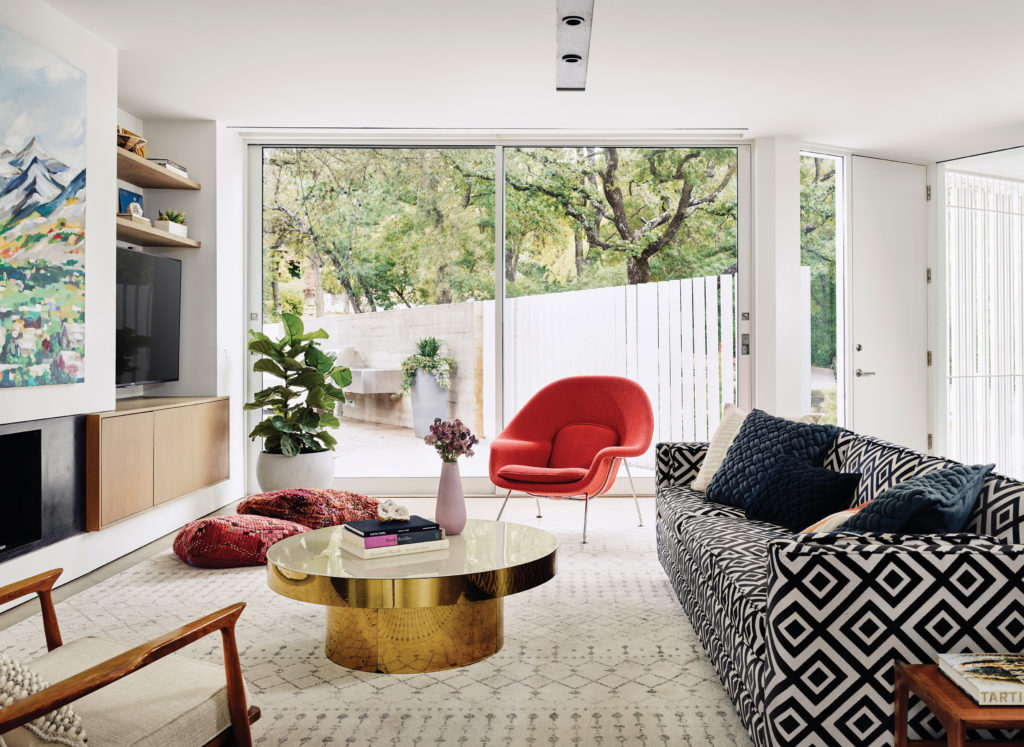 The living room strikes a balance between the courtyard on one side and the woodland views on the other. The sofa fabric is from the David Hicks Collection by Ashley Hicks.

Houses designed by the firm engage with their surroundings, many of which have inspired ingenious solutions that enhance, rather than adjust to, challenging sites and strict building codes. The sense of surprise and wonder is constant. The flow from room to room provides a continual sense of discovery, particularly as the light changes. Alter describes it as a cinematographic experience — you’re looking at one thing, and then you’re drawn to another and another, like a long tracking shot. 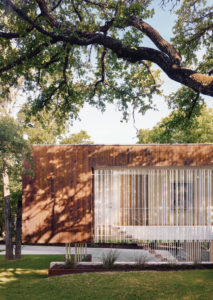 In a home named Sugar Shack, the exterior is a dramatic volume of shou sugi ban cedar with a white steel finish. 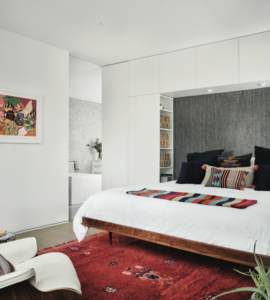 In a project titled Constant Springs, for instance, there were protected live oaks on a sloping 1/3-acre site surrounded by houses. “You can’t dig around a tree without killing its roots, but you can put a deck around it and let water come through,” Alter says. “We adjusted the courtyard so it feels as though you’re coming onto a flat property, and you meander out into this pavilion, and you realize you’re 14 feet in the air.” The continuous wood ceiling has sinuously curved openings, through which the tree trunks rise and rain appears to fall inside the house. 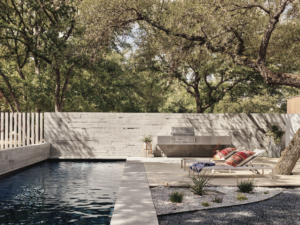 A Fisher & Paykel DCS grill is built into the board-formed concrete wall in the courtyard and pool area.

Additional projects demonstrating the firm’s creative problem solving include South 5th, a small house with a glass-walled living room that cantilevers over an escarpment, and Sugar Shack, which, rather than squarely sited on its suburban lot, is angled so that it straddles two very different views — on the one side, a grassy courtyard, on the other, a ravine. 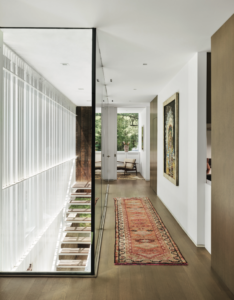 An exterior staircase rises from the recessed carport. It’s connected to the interior of the house by a glass wall and framed with a veil of white steel. The floors are fumed white oak.

Alter says that working with clients requires a mix of hubris and humility; the ability to tell someone “our solution is better” and the humility to accept that it’s their house, and they know themselves best. “I think all of our houses are attuned to the people and the places they’re for,” he explains. “I’m always suspicious of architects whose work is the same. I like to think that if you see a house, you can tell it’s ours, but each is quite different.” 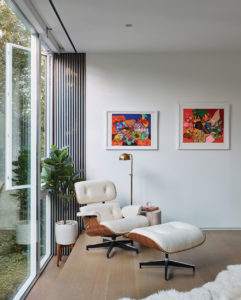 In the master bedroom, and in other areas of the home, the windows drop below floor level, providing a connection between the interior and the tree canopy outside. An Eames lounge chair and ottoman are the perfect spot for reading. Photos: Casey Dunn

He describes one home built on a narrow site that won numerous awards. The client later claimed the innovative solution as his own. “And I thought, ‘That wasn’t your idea!’” Alter says, laughing. “But later, I started to feel good about it, because it’s his house. I love that clients feel ownership.”