Architectural details and a notable art collection are some of the highlights of this 7,446-square-foot home in Paradise Valley, Arizona.

LIVING PART-TIME ON A RANCH FOREVER changed the lives of art collectors Ray Harvey and his wife Kay. With a permanent residence in Tennessee, Harvey first fell in love with the West while hunting elk in Colorado. Consequently, the couple purchased a ranch near Chromo where he had first hunted. When the Harveys spent time there, they often found themselves driving the short two hours to nearby Santa Fe. It was during these trips that Harvey began to associate the landscape with the art he was seeing.

In 1998, after a successful career as a builder and developer, Harvey retired and the family moved to Palm Desert, California. Playing a daily round of golf was par, but after a time, his interest in Western art took precedence. Visiting museums and auctions, sometimes just to study the trends, became routine for Harvey. His art collection grew to include the best of the Taos Founders’ work and paintings from Los Cinco Pintores, a Santa Fe artists’ collective established in 1921. The quality of the collection, including pieces by Herbert Dunton, Victor Higgins, and Ernest Blumenschein, earned Harvey the moniker of “the man with the golden eye” — a tribute given to him by art dealer Forrest Fenn. 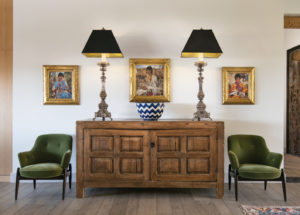 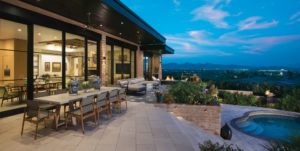 The McDowell and Superstition mountain ranges are visible from the patio, an area that extends the entertainment space of the home and includes a fire pit and outdoor kitchen. 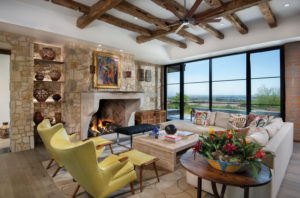 An 18th-century limestone fireplace from southern France anchors the living room and is surrounded by a wall of Kansas City rubble-stone. Mid-century modern chairs juxtapose the Harveys’ collection of Native American pottery. 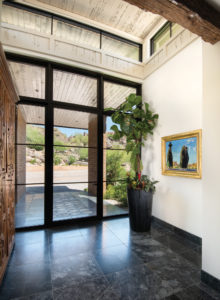 The entryway to the Harveys’ home blends old and new, with pecky cedar walls, black tile, and a 1916 painting by Walter Ufer.

In 2005, the Harveys moved from Palm Desert to Paradise Valley, Arizona, near Scottsdale. Becoming part of the community, Harvey served on the founding board of Western Spirit: Scottsdale’s Museum of the West, helping them mount their first exhibit by loaning pieces from his collection. Now, as an emeritus member of the board, he praises fellow board members who worked diligently to establish the museum.

The Harveys’ Paradise Valley home is modern and functional, and a primary inspiration was the juxtaposition of old and new. “As a builder for 30 years, I knew what I wanted when starting this house,” says Harvey. “I wanted the modern look — tall windows and the simplicity of uncluttered spaces — but where the Old West could be at home, too.”

Paintings by Georgia O’Keeffe and Helen Frankenthaler live alongside Robert Henri and Thomas Hart Benton. Throughout the home, doors and windows stretch from ceiling to floor to provide captivating views of the desert’s giant saguaros and the faraway mountains. 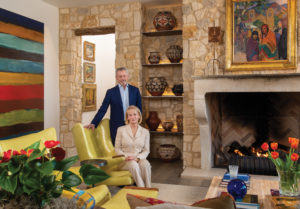 Ray and Kay Harvey designed their home to incorporate both contemporary and Old West touches, illustrated with their mix of artwork; a traditional Western painting by William Penhallow Henderson sits above the fireplace, while a modern painting by Sean Scully hangs on the opposite wall.

“When we decided to downsize from the first home we purchased in Arizona, our home sold quickly, but we couldn’t find a replacement,” Harvey says. “I found a property with views, but it didn’t have the home we wanted, so I had to come out of retirement.”

Harvey worked with Scottsdale architect Jason Chouinard on the design. “He was able to read me pretty well,” Harvey says. “It became a collaboration, as I was not your typical client.” 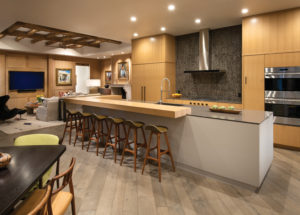 The kitchen cabinets are made from both tiger and French oak. The quartz countertop is finished with European edges. 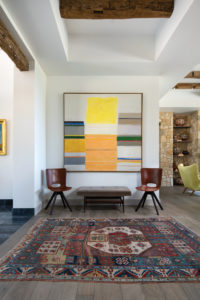 A painting by Ida Kohlmeyer welcomes guests in the living room. A vintage Persian rug and mid-century modern seating keep with the theme of the home.

“I have designed several homes with Ray,” Chouinard says. “He selects lots in architecturally rich settings with incredible views. The results are always outstanding.”
Materials referencing the Old West include hand-hewn oak beams reclaimed from Midwestern barns. Pecky cedar walls, salvaged from the original house, adorn the entry and bar, while 19th-century limestone fireplaces from southern France set the tone. Sleek finishes lend a modern feel in the cabinetry, with European edges on countertops. Vallone Design of Scottsdale planned the interiors and sourced products, including the beams and fireplaces. 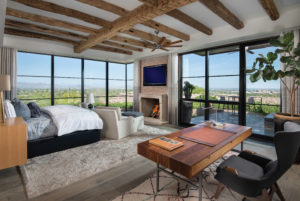 The windows are angled at 90 degrees, providing an expansive view of the surrounding landscape from the master suite. Hand-hewn oak beams, reclaimed from Midwestern barns, are used throughout the home. 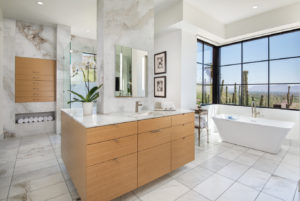 The master bath features a two-sided, mirrored medicine cabinet that sits between his and her sinks. The sizeable windows surrounding the tub fill the room with light.

“Over the years, Ray and Kay had curated exceptional Mid-century Modern pieces along with amazing Sabino pieces,” says Kerri Foreman of Vallone Design, adding that the firm worked to “integrate their collection of treasures” with new custom furnishings to create the home the Harveys envisioned.

When it came to the build, Genova-Detwiler Custom Builders rounded out the team. The fact that they’d received a prestigious Excellence in Masonry Citation Award from the Arizona Masonry Guild proved to be advantageous. Co-owner Cal Detwiler says that only a third of the original slump block of the exterior walls was usable for the new home. “The original masonry had a heavy mortar wash that had to be removed to make it like new. When we laid the new block, we did it with a technique so that the joints on the new block matched the original,” Detwiler says. This is a technical undertaking, as slump block is made of concrete that’s removed from the mold before it has had a chance to completely set, causing it to keep a slumped appearance like an adobe brick. 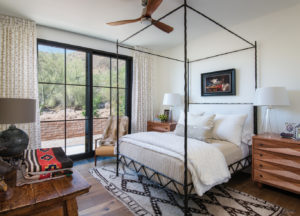 Each guest room is outfitted with organic textures and colors. 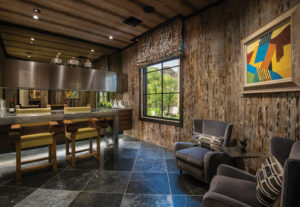 Pecky cedar walls, reclaimed from the original home, appear in the bar, complemented by a zinc countertop and stainless steel cabinets above. A painting by New Mexico Modernist Arthur Dove adds color to the space. 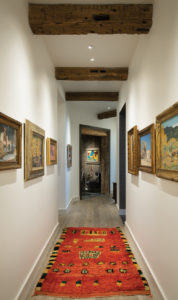 Every available wall is utilized to present the Harveys’ collection of artwork, including this hallway of Taos Master paintings.

Today, the couple’s art collection is ever-changing. Many of the Taos pieces went to new homes, as Harvey began collecting modern works in consideration of his grown children’s art preferences. In doing so, he follows his original collecting philosophy.

“When I got serious after buying art for three years, I decided to focus on quality over quantity,” Harvey says. “I ended up paying top prices for top-quality paintings and didn’t worry about getting a deal. I was more concerned about the painting — was it the best effort of the artist? Several of the paintings I bought set records at auction.”

The Harveys generously share their home with art collectors worldwide. Friends of the Smithsonian and, more recently, Friends of the Louvre have toured the home to see the collection, and the flow of the home is perfect for entertaining. The tall windows and doors segue into the outdoors, melding the two areas with ease. It’s a wonderful showcase of art and its Arizona setting. The intrigue of the Old West successfully meets Modern masters in this artistically inspired home.