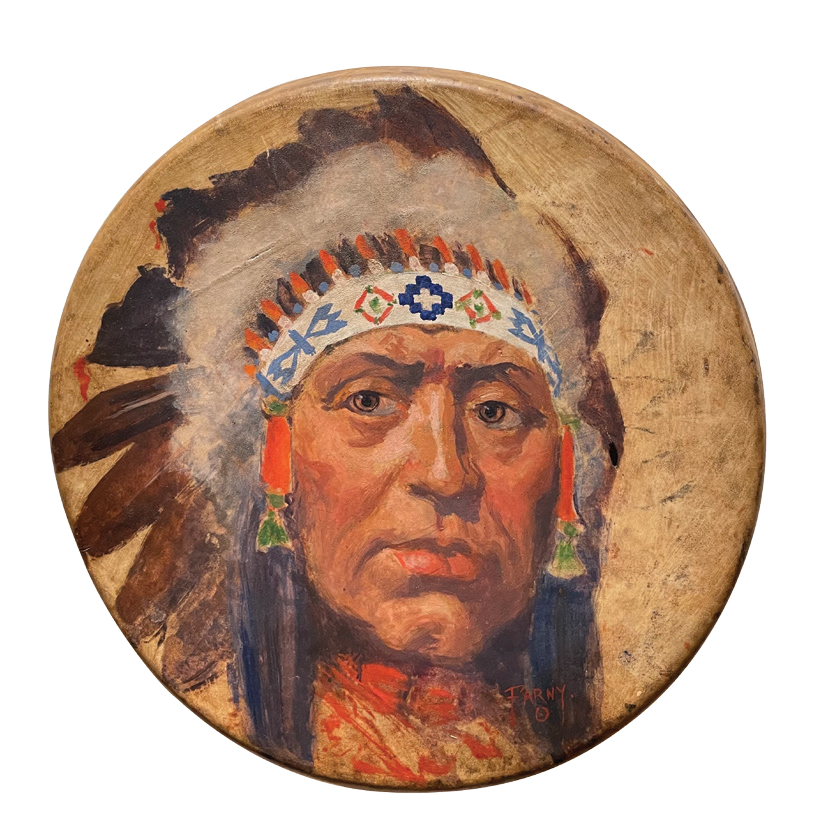 Sometimes, I get the opportunity to enjoy a really great piece of art that is atypical of the normal body of work for which that artist is known. I recently saw this portrait, painted on a leather drumhead, at the home of collector friends. Although Henry Farny painted many portraits, as well as the detailed scenes of everyday Native American life for which he is best known, this work is unique for the surface on which he chose to paint it.

Born in France in 1847, Farny and his family moved to western Pennsylvania in 1854. That was where his lifelong affinity for Native Americans began, as he watched his mother befriend and care for local American Indian neighbors. The Farnys relocated to Cincinnati in 1859 and, though Henry traveled widely, that city remained his home until his death in 1916. He became a popular figure in local social circles and enjoyed prominence and success as an artist.

Farny’s painting studies included three years during his early 20s in Düsseldorf under Albert Bierstadt, who himself later went on to become one of the great painters of America’s Western landscape. Like so many of our greatest artists, Farny began his career as an illustrator, earning significant assignments from both Harper’s Weekly and The Century Magazine. As part of that illustration work, he made four trips out West in 1880s, including a thousand-mile canoe trip down the Missouri River. As far as we know, he took his last journey West in 1894.

Farny was most sensitive and sympathetic to the plight of the American Indian, with his thoughts and feelings reflected in his poignant and moving narrative works, most often painted in gouache. He understood the power of the visual language of art as he portrayed members of the Sioux, Zuni, Apache, Crow, Cheyenne, Blackfeet, and Comanche tribes. These quiet scenes are some of the most powerful artworks of the American West.

Paintings by this historic master are highly sought after and command significant prices, and you’ll find them in museum collections across the nation. I hope you will seek out and spend time with some of Farny’s many, many extraordinary paintings. In their very quiet way, they will move you more than you might expect.