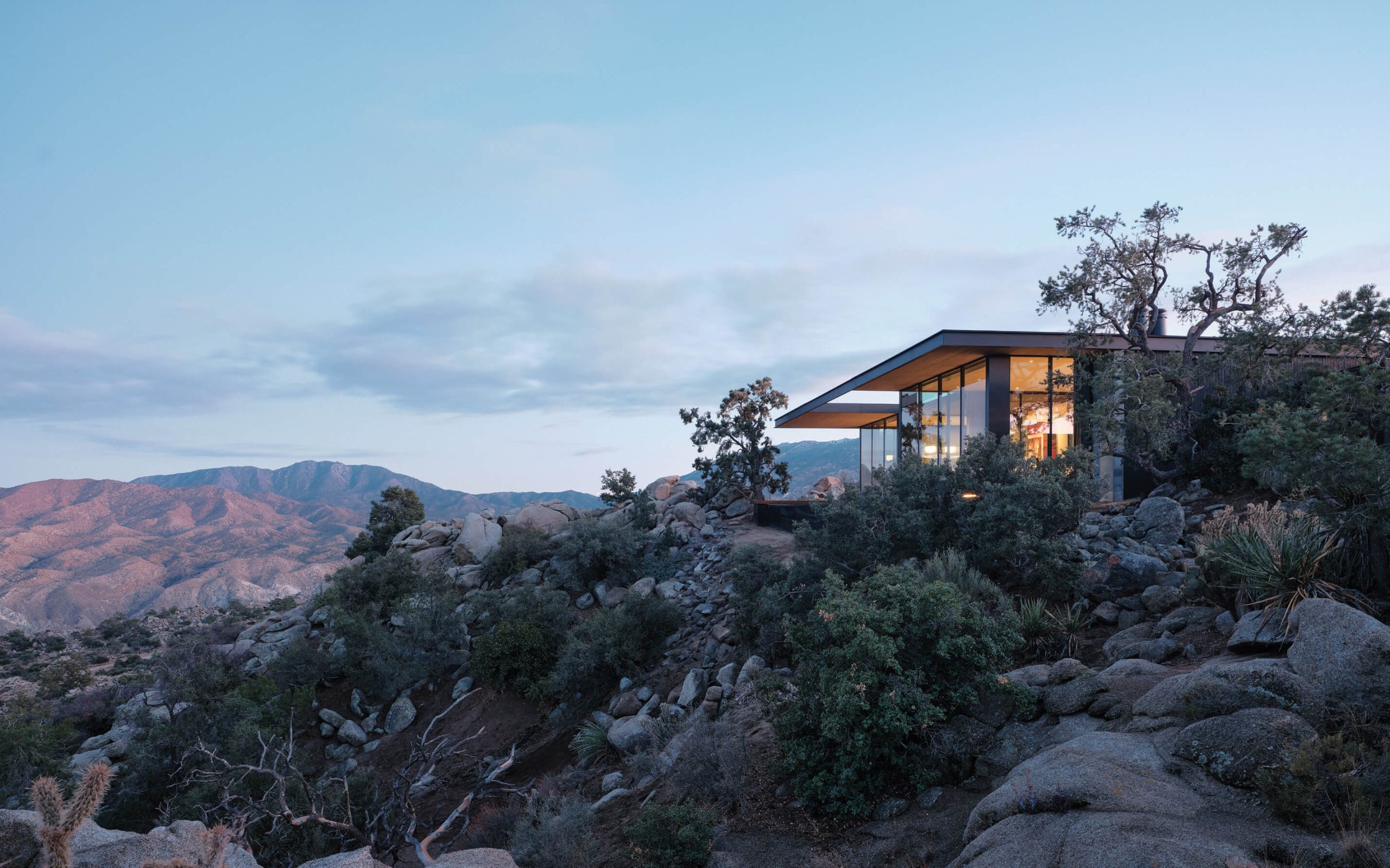 Urban Californians wanted a modest escape that would fit seamlessly into their site on a striking plateau outside Palm Desert. In Desert House Retreat, Aidlin Darling created a breathtakingly minimalist and sustainable home of wood, concrete, steel, and stone that celebrates the existing piñon trees and show-stopping, naturally sculpted boulders. Photo: Joe Fletcher 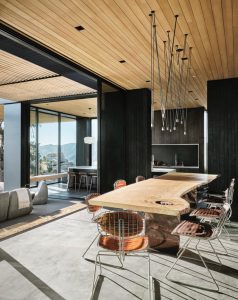 At the center of the house, the dining room and entry serve as the meeting place between public and private spaces. Photo: Adam Rouse

“I was an honor student, but I hated school,” he explains. When it was time to choose electives in high school, he says the process was like choosing among weapons with which to stab himself. On his sister’s advice, he signed up for drafting — a course that has inspired many to choose a career in architecture — but Aidlin describes that and an early architecture course as painless, yet hardly exciting for a baseball player. Then, when circumstances prevented him from joining the baseball team at the University of Cincinnati, he opted, without much enthusiasm, for a major in architecture. It was during those first days of classes, putting in late nights and hard work, that the light bulb finally went off. “My passion,” Aidlin says with a laugh, “very luckily for baseball, transitioned into architecture.” 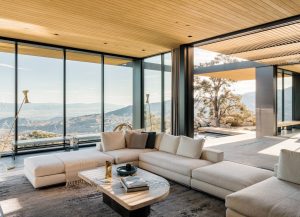 Materials quietly contrast with the pale desert palette, including warming, texturally intriguing wood that has been acetylene-treated, burned, and wire-brushed. The live-edge table is from Jay Jeffers. The rug from ABC Carpet & Home was handmade in Pakistan. The sofa is Hamilton by Minotti for Arkitektura. Photo: Joe Fletcher

Aidlin’s father’s dying gift was to leave him the funds to study and travel abroad for two years, and during this time, the work of Europe’s Modernists created a lasting mark on the young designer. He names Le Corbusier, Carlo Scarpa, Renzo Piano, even Antoni Gaudí as making strong impressions. 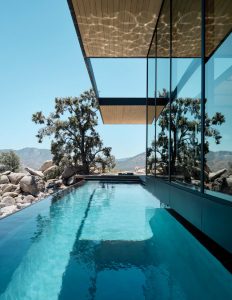 An aperture in the floating ceiling frames the sun and provides exposure to the infinity swimming pool. Photo: Adam Rouse

“Even when you stumble across unknown architects,” he says, “it’s just an attitude, throughout Europe, about their craft and how a building ages gracefully. The materiality of a building, how they cut and sculpt light. It’s done with such incredible rigor. It’s tremendously powerful.” 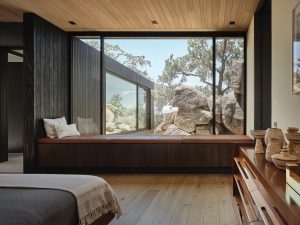 The homeowners’ bedroom illustrates the intimate relationship with the site’s intriguing flora and fauna. The flooring is Amity Oak from reSAWN Timber. Photo: Adam Rouse

Aidlin and Darling had known one another at the University of Cincinnati but hadn’t been in contact in years. Then they ran into one another at a Christmas party in San Francisco and cemented a friendship that led to endless conversations about design, with evenings and weekends devoted to critiquing one another’s work. Each continued working for different architecture firms, but they opened a woodworking studio where they designed furniture using Aidlin’s father’s sculpting equipment. The firm followed and has been open now for 23 years. 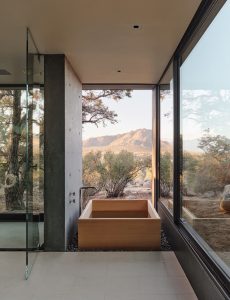 “I would trust him with my life,” Aidlin says of Darling, adding that a firm partnership is akin to a marriage. “We just had this incredibly productive chemistry that’s [still] with us today.” But what attracted him most to working together, he says, was Darling’s gift for critique. “There are certain people who critique your work, and the project goes sideways or backwards,” Aidlin says. “But Dave and I have a unique ability to critique a project, and the project always goes forward. It’s almost like you have a common language but the freedom to venture any which way, with a strong structural construct behind it that anchors the work. Because at this point, given the volume of work we have, he’ll lead a project, and I’m the editor; and I’ll lead a project, and he’s the editor.” 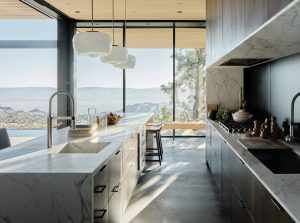 The light-filled kitchen opens onto the deck. The sink is by Kohler, the faucet is Blanco Culina, and the custom cabinetry is by Henrybuilt. Photo: Adam Rouse

The team now numbers 23, or, as Aidlin jokes, one for each year of the studio’s existence. He’s more serious when he describes the team as an international group of “ridiculously talented, racehorse caliber” designers. “We’re almost as proud of the team we’ve created as we are of the work,” he says. “We’re very blessed.” 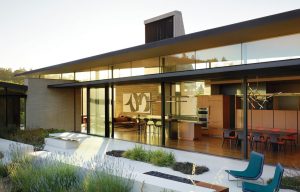 At the House of Earth and Sky, a set of 55-foot-wide sliding glass doors remains open all day, uniting the views, sounds, and aromas of the outdoors, beckoning the clients into the garden. Custom cabinetry is by BoxCabCo. The kitchen island is by Chris French Metals.

Aidlin feels that with the advent of digital tools for designing, architects developed a fascination with the power of the visual. He and Darling were wary. “We kind of swung the opposite direction, to the psychological and the tactile,” he says. “The studio really began to focus on designing for all the senses. You know, when you travel the world and you see remarkable architecture, your body feels the power of the work. It’s not just a visual experience.” 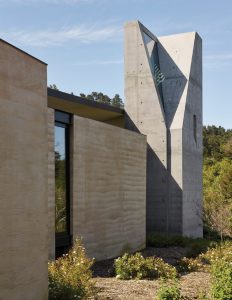 The reading tower, a sculptural counterpoint to the soaring butterfly roof, is entered through its own doorway uniting the kitchen with the wine cellar below. The stairwell doubles as a natural cooling system.

Among the elements that make the studio’s work unique, Aidlin says, “I really do think it’s that attention to how the human body receives information, and the focus on exploiting and exploring that. The acoustics of a space, the tactile qualities, the smell of it.” 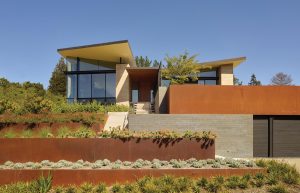 The LEED Platinum, Net Zero house is an ode to the intersection of earth and sky.

The architects are known for camping out on sites, whether it’s an urban remodel or a ground-up project in the desert. “It’s light; it’s wind; it’s smell,” Aidlin says. “What part of the site reveals itself at what time? What are the temperature swings? The worst thing a lot of architects can do is look at what other people are doing. A big retracting wall of glass will never be opened if winds are coming straight at it. It’s a wasted gesture if you don’t understand what the greater forces are. So we’re very fully hands-on, and that’s why we’re not growing the studio much more — Dave and I want to be intimately involved in every project. In the back of our minds, we’re seeking a more timeless truth. Designing more practically. How does one occupy the site? What are the requirements of the home, the family, and how do you create this honest response between the client and the land?” 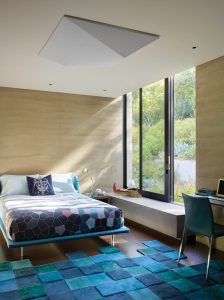 For Aidlin Darling, a profound element of sustainability is longevity, a beautiful house that will last through generations. The bedroom is cork Carpet Tile by DuroDesign.

Early on, the studio became more fully dedicated to sustainability. After a mixed-use project won them awards, they continued designing sustainably even when clients aren’t particularly passionate about it. “I think the fascinating thing right now for all architects is that the performative nature of building is being scrutinized at an unprecedented level, and the building components that we’re working with are evolving quite quickly in response,” Aidlin explains. “So it’s not just building a building; the building has to perform at every level and be rigorously engineered. For instance, all the glazing systems have completely changed in the past 10 years.” 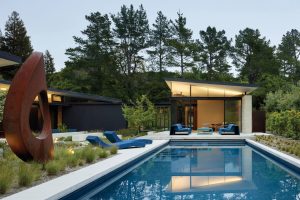 “It’s exciting,” Aidlin adds. “The form of a building is going to be changing because of these elements — like your glazing system. I would say in 10 years, windows will be solar panels as well as windows, and all of your energy supply will be coming through your window systems. So what does that mean as to the form of your building? That’s when it gets really intriguing — when science and manufacturing combine, and then the architect responds kind of poetically and intelligently.” 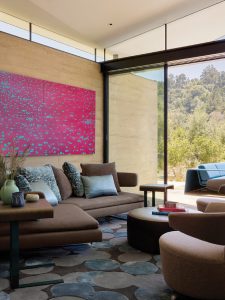 More than a sustainable house constructed with authentic materials providing a connection to the outdoors, the clients wanted a home with warmth and a constant sense of almost childlike surprise. Photos: Matthew Millman

Aidlin Darling Design prides itself on its craftsmanship, and they’ve assembled a team of contractors and craftsmen with whom they regularly work. They’re known for their custom steelwork, woodworking, and concrete in both public and private designs, but Aidlin is particularly proud of the team’s design and the top-flight artisans assembled for the San Francisco AIA’s Center for Architecture + Design, which he hopes will inspire children who might not otherwise have the funds or education to access museums or design. 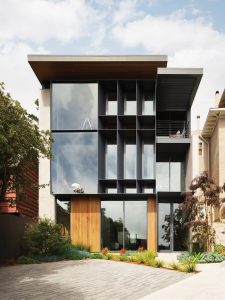 Terrace House is a dramatic remodel of an undistinguished 1950s hillside house in San Francisco, designed to accommodate three generations of a family.

The precision and attention to proportion in the studio’s work can be traced back to their furniture making days, where a fraction of an inch can put everything off-kilter. Aidlin emphasizes the tactile aspect of proportion. For instance, how does a potential handrail width actually feel? “You can take very inexpensive materials, and if they’re proportioned well,” he says, “the end result will be exquisite. So we design our buildings to the level of furniture.” 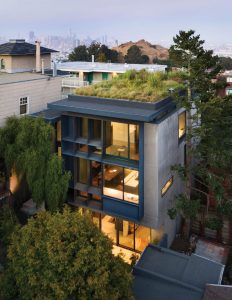 The front and rear facades employ 20-foot-tall and 30-inch-deep steel brise soleils that both deflect light and frame stunning views while editing out the less desirable ones.

An ideal client, Aidlin says, is someone who can express what they want or need — and the two are not the same — along with a capacity to trust the designers. For less articulate clients, it becomes a process of trying to pry out of them a description of how they want to live in the house and on the land. “How, in the end, can these homes be an effortless extension of the clients?” he asks. He describes designing for a morning person who wants a cup of coffee as the sun rises over the landscape, and the team’s dedication to providing that magic moment. 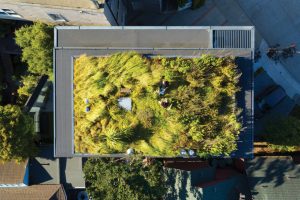 A sculpted living roof provides insulation, rainwater purification, and an inviting natural escape from the urban surroundings. The landscape design is by RareField Design/Build. 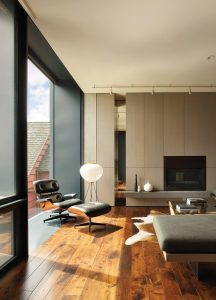 The interior is sheathed in a variety of woods that provide visual and tactile warmth. The flooring is custom walnut.

The firm’s future appears to be equally divided between public buildings and single-family homes; and they wouldn’t want to give up either. “It’s experimentation in very different psychological realms, designing for the masses versus designing for the individual,” Aidlin says. “And they cross-pollinate and inform each other. One designer can be working on a university building, and the next day they’re working on a private residence in L.A. It stretches and refreshes our brains.” 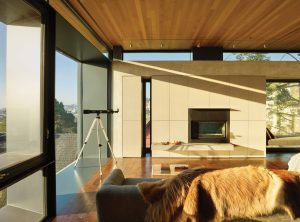 Custom furniture contributes to the house’s feeling of intimacy while efficiently creating a sense of expansion within the limited footprint. 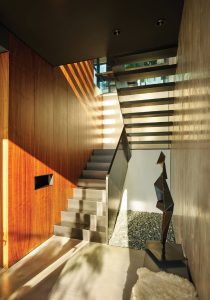 The sculptural stairway reaching from the foyer invites one into the house. Photos: Matthew Millman 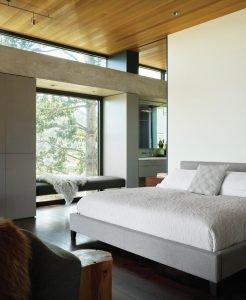 The top floor contains the parents’ suite, including their bedroom, bathroom, and dressing room, with the addition of a small play area for their children. Photo: Matthew Millman